Seek Hearts is the latest game to join the impressive(?) catalog of KEMCO titles already on the Switch – number 25, to be precise. Though KEMCO RPGs are nothing but a meme for some, SwitchRPG has proven before that sometimes, these budget-friendly, retro-style JRPGs are worth a closer look. When it comes to Seek Hearts specifically, the game doesn’t achieve enough to stand alongside the other “KEMCO greats,” but it does offer some “fresh takes” on a few features that may lean it towards being worth your time. 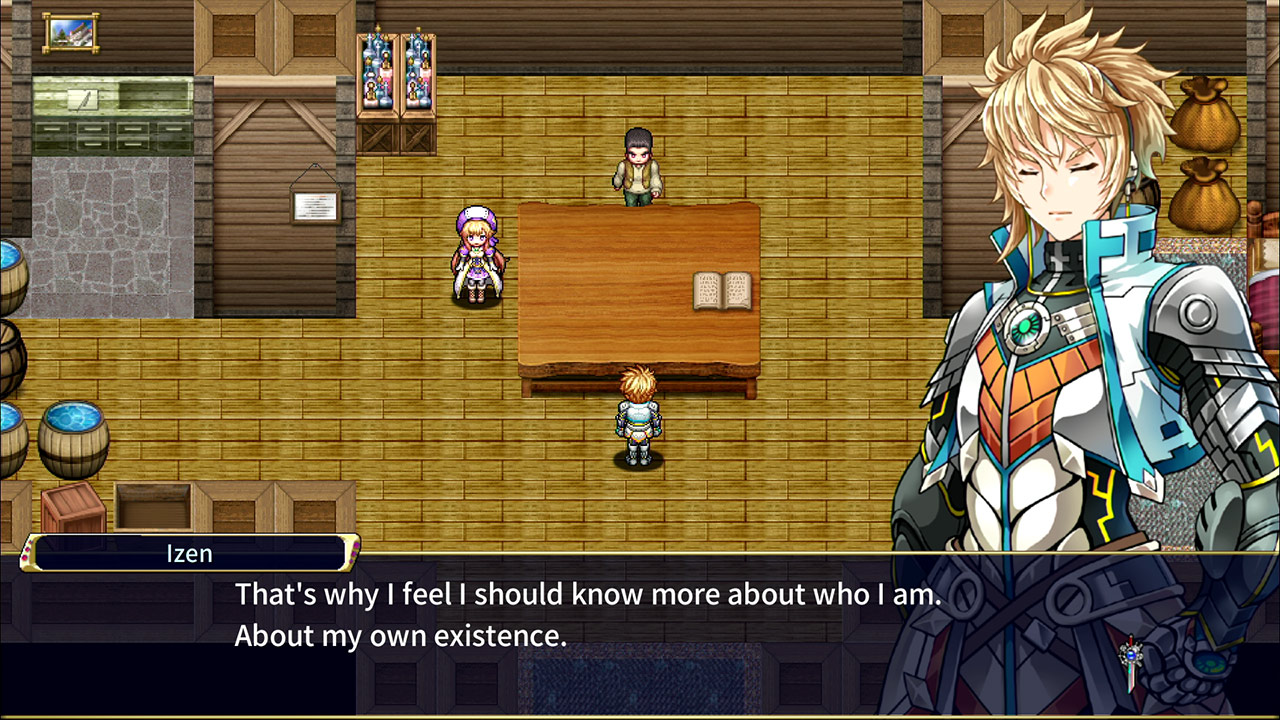 Seek Hearts follows a sentient mechanoid, Izen, as he seeks out the truths behind his creation. Izen – in fact, all mechanoids of this world – cannot recall their original purpose, sporadically emerging from factories with no knowledge of their previous lives, or purposes. He makes his way to a small village, which he remains at for twelve years – making a name for himself and befriending townsfolk – before pursuing the past that has always haunted him from the beginning. In this world, a lifeform hierarchy exists: between fairies, humans, and mechanoids, the latter is often mistreated, misused, and downright shunned by the former two. On the other hand, there are those that simply want to coexist, as has been the case between humans and fairies since the beginning. Little do all these races know that soon, beliefs they’ve clung to for ages may be jeopardized by new revelations.

Seek Hearts has one of the strongest opening acts of any KEMCO RPG I’ve played thus far, though the excitement wanes considerably as you progress the narrative. Izen recalls the initial details of his tale after being thrown into one of many walls by his right-hand lady, Clara. Her superhuman strength and carefree nature has unexpectedly sent the mechanoid flying into many objects previously, and remains an occasional point of comedic relief during the adventure. Although much of the luster is lost after the initial crash, it is such an entertaining way to begin the adventure that I would be doing the game a disservice in not acknowledging it. 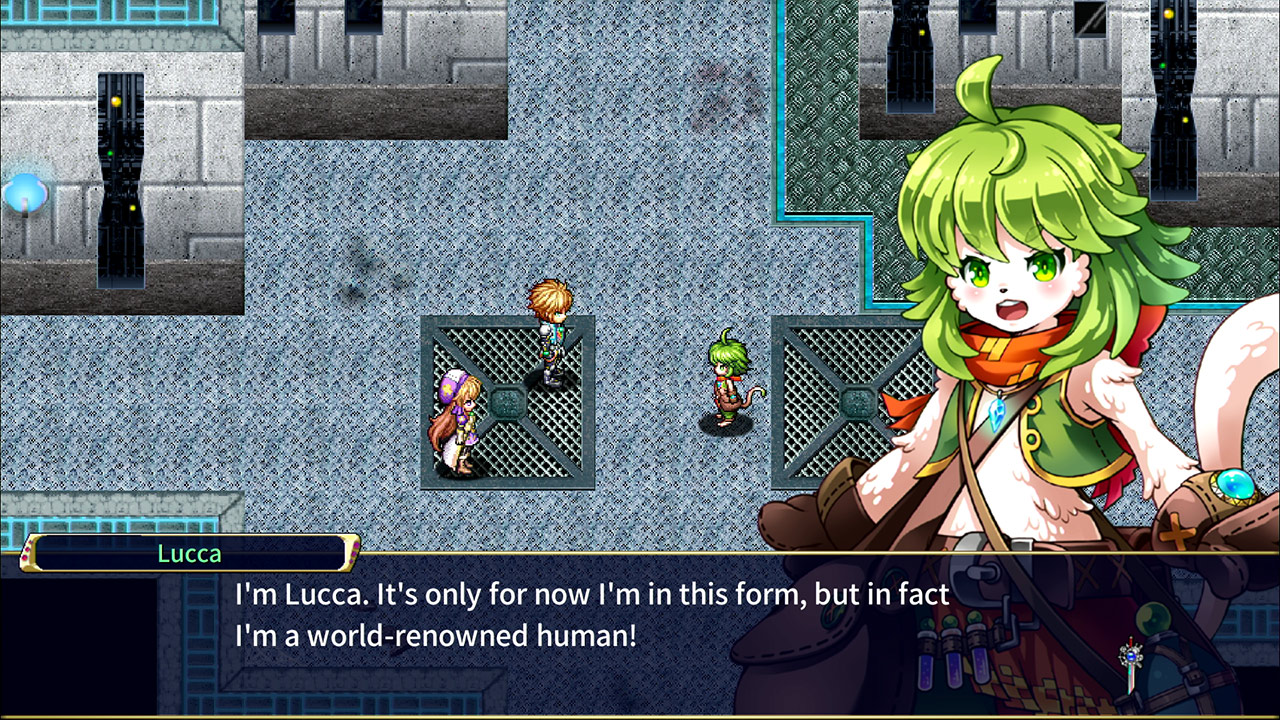 In a world where many RPGs live and die by their overly serious narratives, KEMCO almost always features some form of comedic relief as a counterbalance, albeit to varying degrees of success. Between the “wall accidents,” the personality of a future party member, and a certain sentient spaceship, Seek Hearts aims to tell a story that’s both serious and silly, though it wears out its welcome far too early to really be successful at either.

While you have to hand it to KEMCO for being thorough, ensuring the player has enough context to understand any situation, they sometimes go too far, spewing exposition in a manner that muddies up the experience rather than improving it. This, combined with completing most hostile maps in what feels like minutes, means that you may very well spend more time sifting through dialogue than actually, you know, playing the game. Less is more, and that concept could have been applied here. Seeks Hearts appears to feature multiple endings – I achieved the normal one in 10-15 hours – but I’m not very enticed to try for more considering all of the previously mentioned mishaps. 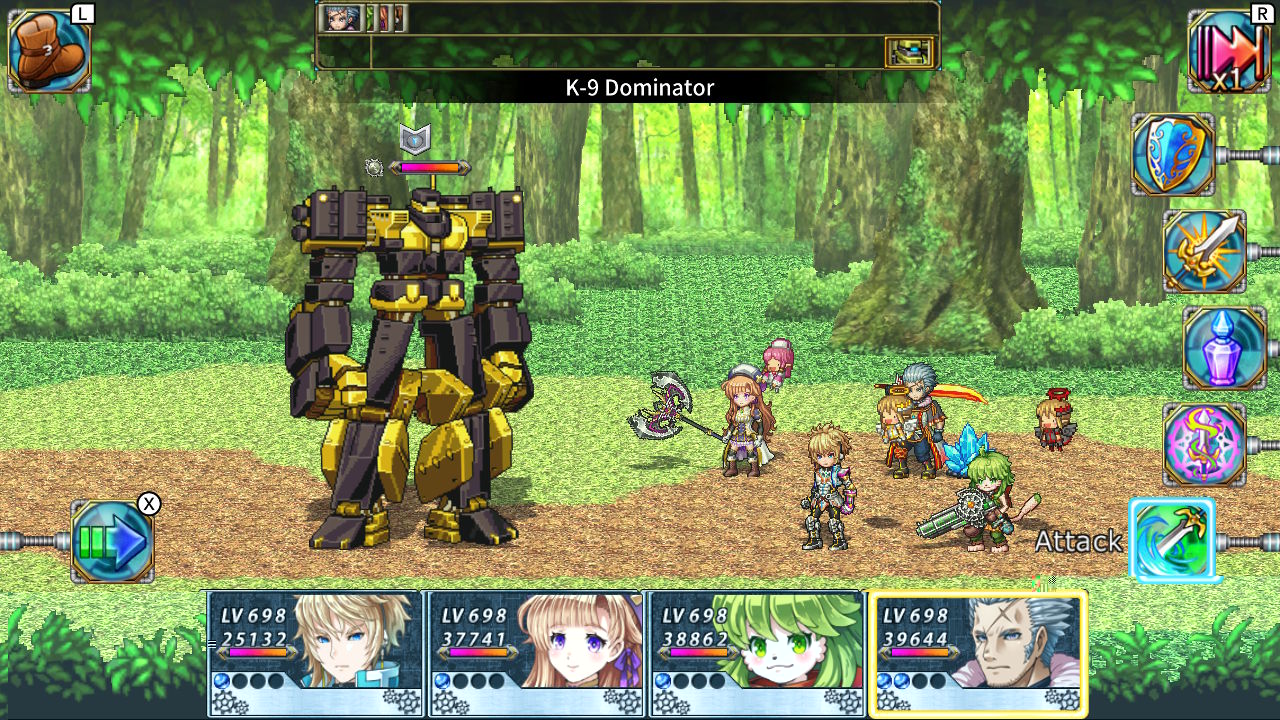 Typically, gameplay is where KEMCO RPGs have the opportunity to shine, as their narratives, more often than not, are lacking. Seek Hearts, like many KEMCO RPGs before it, is a traditional turn-based JRPG at its core. The player follows a linear progression path to reach the end of the story while the occasional opportunity for side content becomes available. Izen and company can equip themselves with various weapons, armor, and even fairy-infused crystals in order to take down their foes.

Seek Hearts will be one of the easier KEMCO RPGs to beat, depending on your difficulty settings and tolerance/avoidance of premium currency goodies. Although there are four difficulty levels to choose from, even the second hardest is a bit of a cakewalk, as you’ll never have to go into the in-game cash shop. If you’ve never played a KEMCO game before, just know that most of these games feature microtransaction systems that will slowly feed the player multiple currencies, which can then be used on various premium items. One can even outright buy premium funds, though it is not recommended due to the aforementioned lack of difficulty, as well as the fact that you will inevitably accrue enough in-game to not have to resort to your wallet. My advice: avoid the shop entirely for the main story – free currency or not – if you want any kind of challenge from the first three difficulties.

Seek Hearts breaks a few of the traditions present across most EXE Create-developed RPGs, such as crafting and unique equipment modifiers. In their other titles, the player could often combine components of the same type to create a more powerful product, but here this process has been converted to a character-specific level progression system for the mechanoid, Izen. Instead of traditional level ups, Izen consumes older equipment to become a stronger mechanoid. 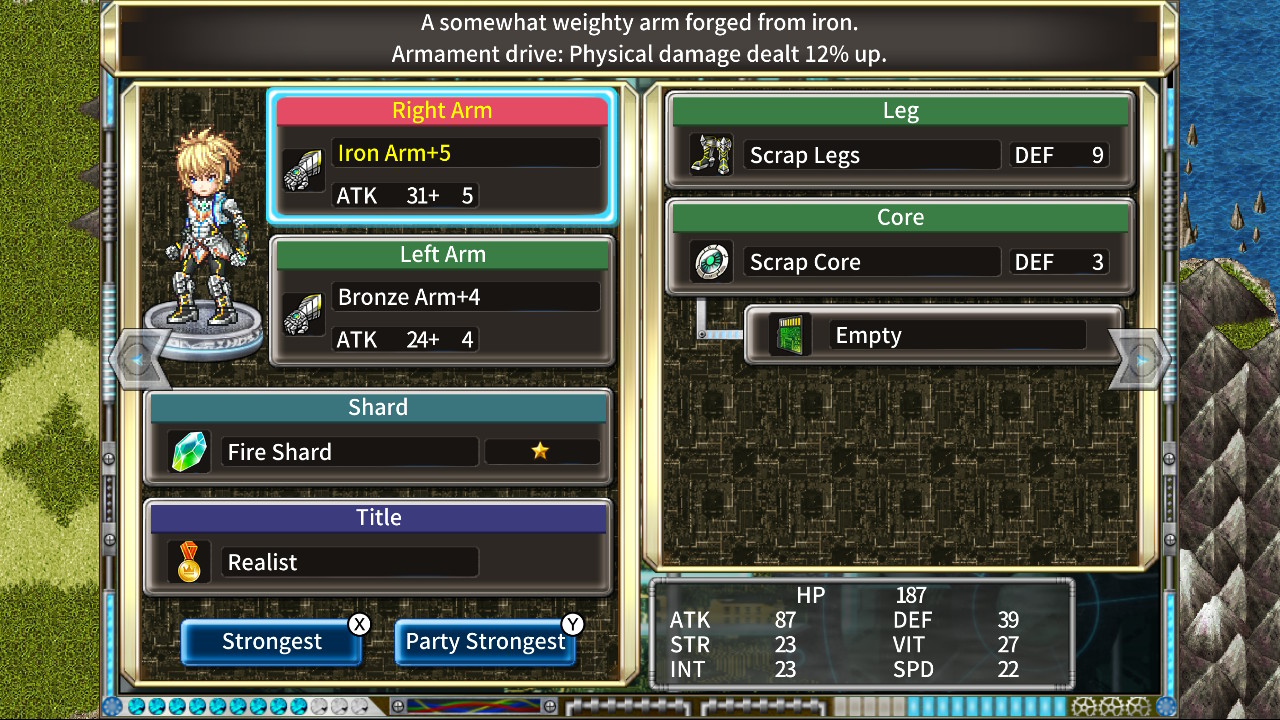 Even though you have freedom of choice in how you want to allocate each piece of equipment, it is far easier to let the system work for itself by choosing the “auto-distribute” option. This deviation from the standard character progression system, while snagging a few originality points, is a bit boring and completely unnecessary in execution. There is no real thinking necessary here, even if you choose to distribute upgrades manually. Instead, Seek Hearts should have taken a SaGa-like approach to their robotics, which would have made for a better gameplay loop.

Let me explain. In many SaGa titles, mechanoid stats are upgraded based on their current gear loadout – stat bonuses provided at a much greater degree than given to their human counterparts – and they often could equip all types of gear. They were limited in the amount of items they could carry though, meaning you had to carefully select which pieces of equipment to use rather than simply “eating” excess gear to improve stats across the board. The process in Seek Hearts feels like just a superficial extra step that must be done to improve Izen, rather than something that truly changes the game for the better.

This isn’t the only thing that feels bland here – most gear lacks unique properties which would encourage you to compare and contrast different equipment. For example, previous KEMCO RPGs would often present an assortment of gear with various traits, like a sword that can cause paralysis, and so on. This added dimension would encourage the player to think about their next upgrade, because it may not always be worth the potential extra damage if you lose the paralysis effect. These little additions, when done properly, make gear progression more than just about plain numbers. While Seek Hearts does feature a rudimentary version of this – with fairy abilities and armament drives to consider – it ultimately lacks the depth offered by many of its sister titles. 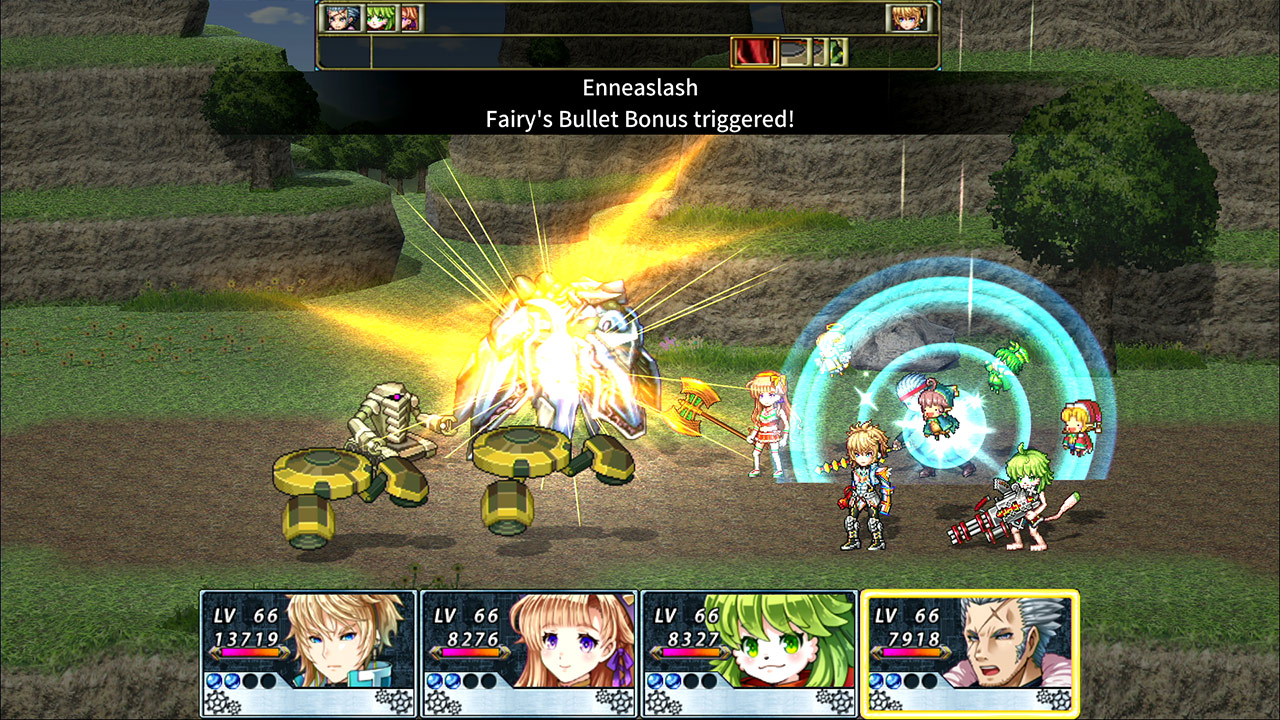 Besides that, Seek Hearts follows the narrow path that has been tread by its predecessors: solve a problem in your current area before moving on to the next one. Even with the eventual acquisition of a boat, and a talking spaceship – comedic gold, at times – the player is still limited to a select few areas based on their story progression. Because of that, there is never a real sense of freedom in exploration.

Seek Hearts features some interesting quality of life components that provide some player choice when it comes to grinding, and combat in general. Terminals at the beginning and end of every hostile area allow the player to adjust the encounter rate, as well as an option to fight three random battles in quick succession. Initially, you can either half or double the encounter rate, before eventually being able to triple or turn it off entirely once you’ve fully explored the map. This will be a godsend for those who loathe random encounters, as you can fine-tune the rate to your personal taste. Personally, I found the three-battle scuffles an easy way to quickly level up my party before taking on a new area, allowing myself to take advantage of far fewer random encounters while I was exploring any given area. There is, however, a potential downside to these features, since it lessens the time needed out in the field, making those already brief spurts of combat and exploration even more brief as a result. All gameplay components considered, Seek Hearts is pretty standard KEMCO fare, with a few additions thrown in that only partially offset some of the missing staples which are found in the majority of their titles. 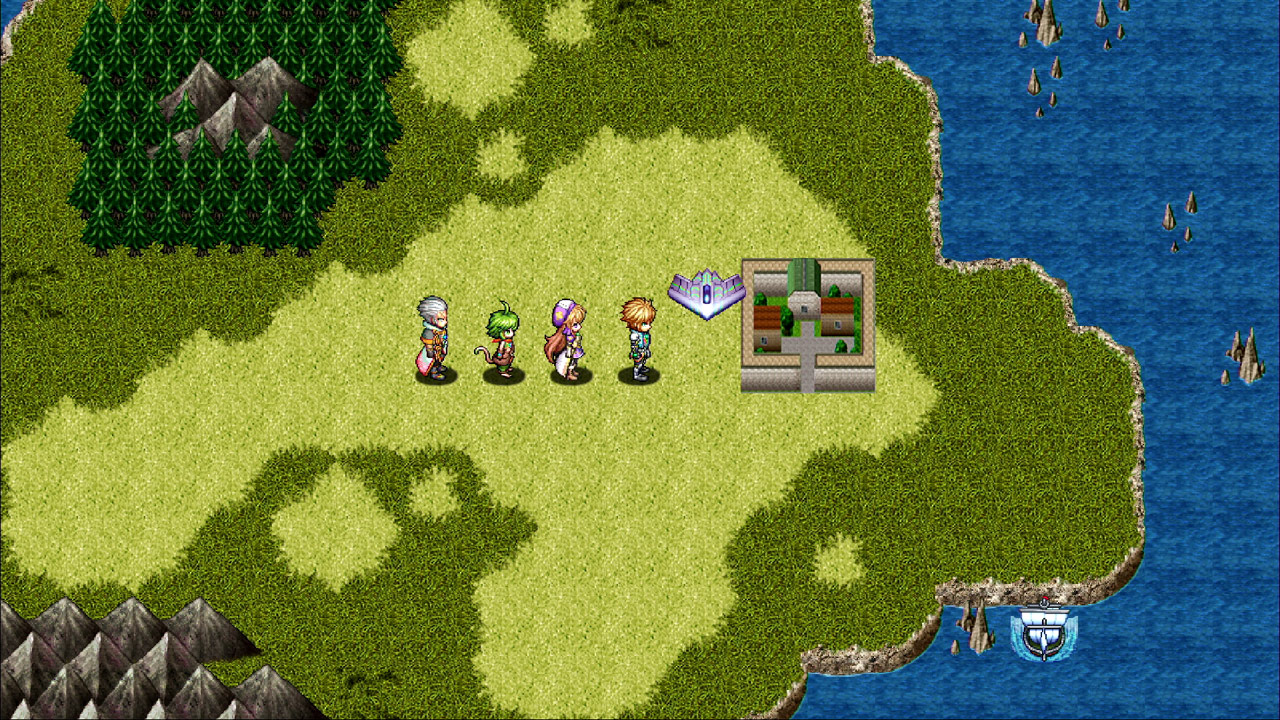 With Seek Hearts being touted as a sci-fi RPG, I had high hopes of being knee-deep in some technologically advanced areas, but this is not the case. Instead, locations rely far too heavily on your average medieval design, with only a handful of run-down techno factories here and there – just to make that sci-fi label stick. If it wasn’t for Izen and the mechanoids at the focal point of the narrative, it wouldn’t really look or feel much like a sci-fi RPG at all. There’s a balancing act that can be done here, as witnessed in December’s Star Ocean: First Departure R, where a game can draw from both settings successfully. If every factory didn’t look the same, or better yet, some technologically advanced villages were present, it might not have as much tonal dissonance.

Fortunately, character and enemy assets fare a bit better, though enemies will begin to repeat themselves – relying on a simple palette swap – before too long. This is not new in the realm of KEMCO RPGs, however. The combat field is interesting, as it relies on some pseudo-3D camera work with pixel art – an Octopath-lite, if you will – but the unsteady, constant movement of the camera may induce some queasiness in some people. I dig it, though. In any given KEMCO RPG, one can generally hear the entire soundtrack in the first hour. To me, this is not an issue when these tracks are good, but can be quite the opposite if the offerings are hogwash. Luckily, Seek Hearts features one of the better soundtracks found in their lineup, but is not likely to leave any lasting impressions on you either.

And there we have it – KEMCO’s first genuine foray into the world of sci-fi RPGs on the Nintendo Switch! Though I stand by their thematical change – in fact, I encourage them to do more in the same sci-fi vein – Seek Hearts is simply not good enough to be the poster child for future technologically-advanced romps. That said, the game isn’t plagued by any serious issues or bugs, and is completely playable from start to finish without any real concerns.

Considering that, Seek Hearts may be worth a look if you’re itching for a budget-friendly, modernized sci-fi JRPG, but there are already comparable titles in the catalog which can be pulled from with perhaps less hesitation – Star Ocean and Phantasy Star come to mind immediately. If you’ve already completed Star Ocean, or cannot stomach the decades-old design of Phantasy Star, then Seek Hearts might be a decent buy.

Maybe you just played too many games and now you are dead inside.