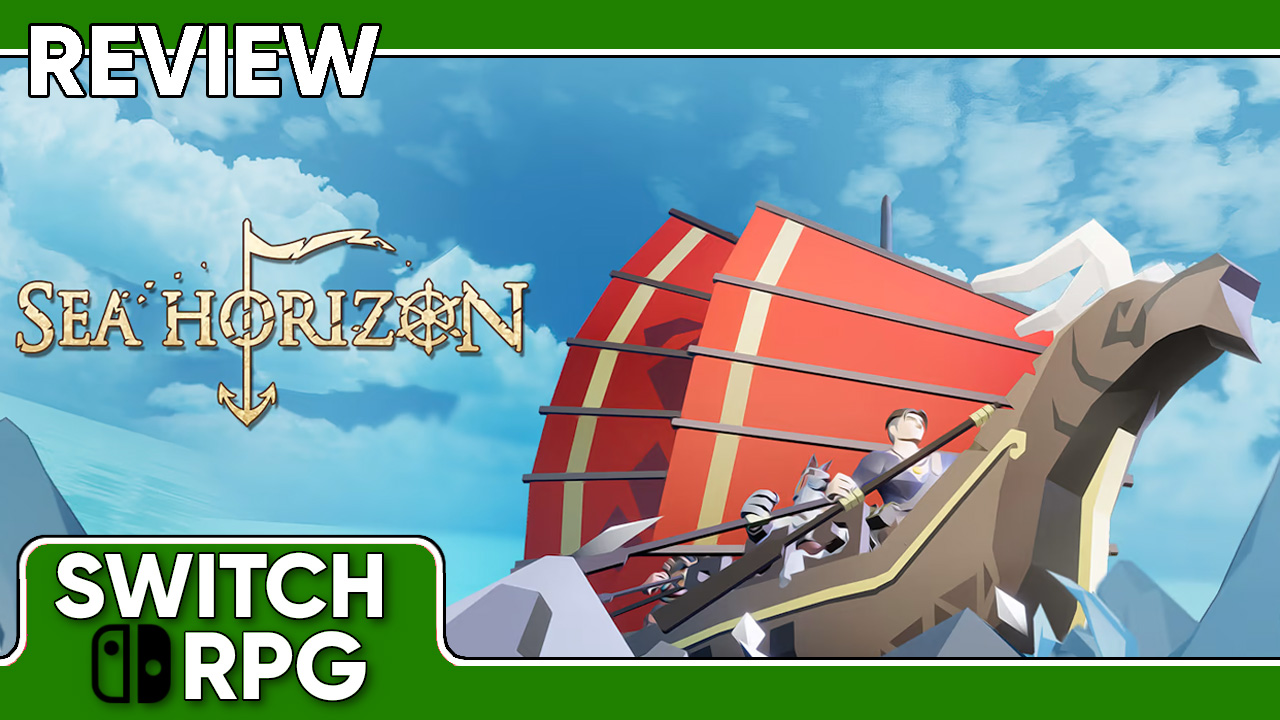 I have reviewed a number of tabletop–inspired titles on the Nintendo Switch during my tenure at SwitchRPG, to the point where I consider myself an expert on the topic. Sure, some have been roguelikes, while others have integrated the concept of luck and deck manipulation into their core gameplay mechanics, then spreading them across lengthy campaigns. The recently released Sea Horizon isn’t exactly a deck-building game, as it mainly utilizes dice rolling rather than cards in order to add a random element to its battles. Like any good roguelike, however, it focuses on resource management and build optimization to ensure success.

Although many of the heavy hitting tabletop titles have already made their way to Switch, is this game unique and mechanically sound enough to warrant a purchase? The way it reveals its roguelike structure is certainly inventive, but it does so in an extremely accessible fashion that grips a strategically-minded player with teases at elaborate gameplay maneuvers. Read on to find out how: 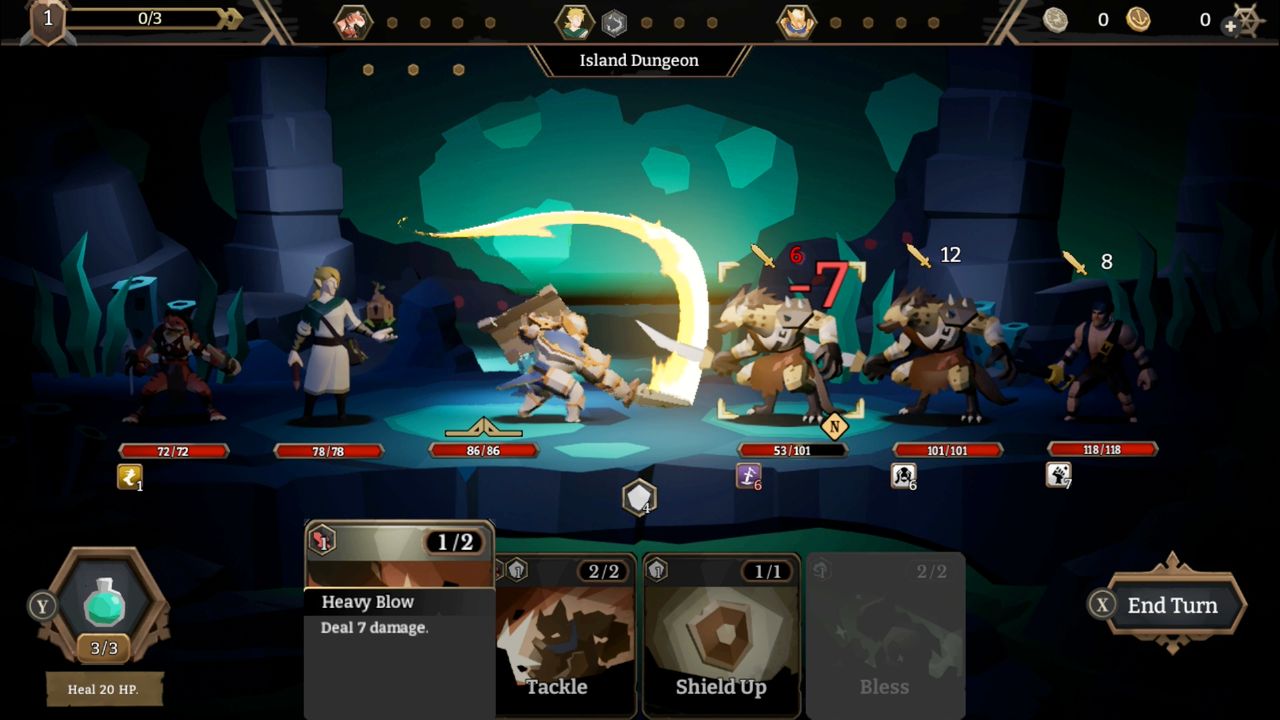 Sea Horizon starts small, with a series of adventure vignettes that serve as introductions to the gameplay structure and character archetypes. You’ll be moving game pieces of your playable party around a hexagon-style grid, complete with obstacles, events, and enemy encounters. You’ll need to be careful, as long distances consume your food meter, which will end your excursion should it dry up completely. There are a number of shop and camp spaces for healing, equipment, and purchasing more food, so while players can run the risk of ending their journey, there are opportunities for you to be exploratory, within reason and the scope of your available resources.

Enemy encounters are displayed on the map, so engaging in battles is a deliberate choice- however, this is where the meat of the game’s mechanics come into play, and besting more powerful enemies is always the end goal of any run. In battle, the playable character or party appears on the left side of the screen, with enemies opposing them on the right. You will see a number of symbols randomly generated at the start of your turn- these are based on the different “dice” you have attached to your equipment. A variety of symbols feature on these dice, which can be used as the mana sources for your set of skills, which can be selected outside of combat and expand as you level up further. Having a wide range of skills to implement in combat is essential, and can be further bolstered by the unique traits of your individual equipment pieces. Equipment can automatically activate certain status modifiers that add armor, generate additional dice rolls, and increase attack based on enemy behavior. In combination with skills and the right dice rolls, the player can execute devastating turns against enemies and further bolster their momentum for a prolonged engagement. 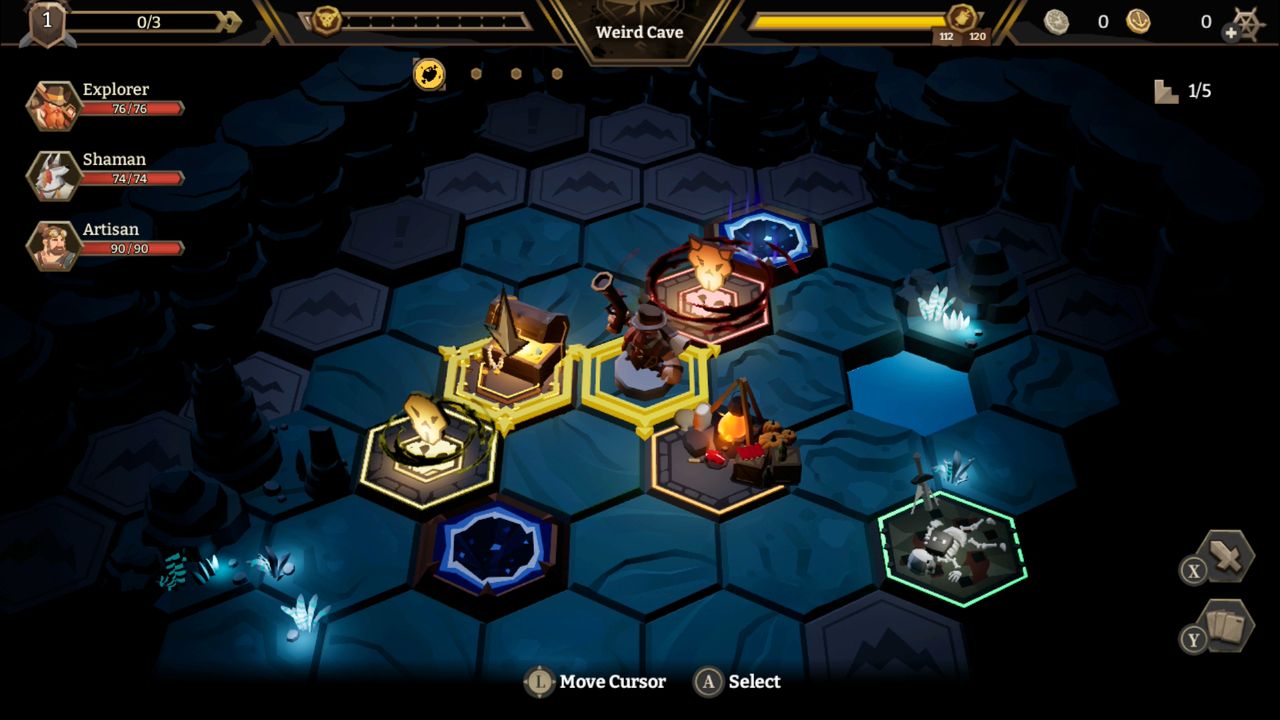 This is essential particularly in the adventure mode, where players are first tasked with learning the ropes of a specific character archetype through a solo narrative. While this is a nice, consequence-free method to introducing the player to the surprisingly wide range of playable characters, sticking them in solo ventures also makes them the direct target of multiple enemies in-battle. However, the structure of these adventure narratives is lenient and thoughtfully-designed, especially as they allow the player to reload their adventure upon failing a battle, booting them back to the last overworld turn they took so that they can alter their build and retry an encounter. If the player should find themselves with a particularly poor selection of randomly generated equipment and a subpar build, however, they will need to restart the campaign in order to try their luck once more. In some ways, it can be more of a challenge than the other game modes.

It is through completing these narratives, however, that your tactical options increase, as these adventure campaigns unlock and transfer characters to the Dungeon and Exploration modes. If you’re a combat purist, you can tackle the dungeon mode, which throws challenges of increasing intensity at a player-designed party setup. Or, if you truly wish to have an open-ended experience, you can explore the larger world in Exploration mode, attempting to survive for as long as possible with your crafted party. With a wide variety of characters to choose from, these more open-ended modes are experimental and similarly build-focused, but with more emphasis on team dynamics.

One final element that is important to note is that each mode has its own achievement system, offering a reward currency that can be used in the in-game store in order to unlock new skins for characters, which also feature new skills that can markedly change the way they function in combat. This further deepens the amount of options a player possesses in each mode, as these alterations can be applied to any one of them, potentially in the pursuit of unlocking even more achievements. 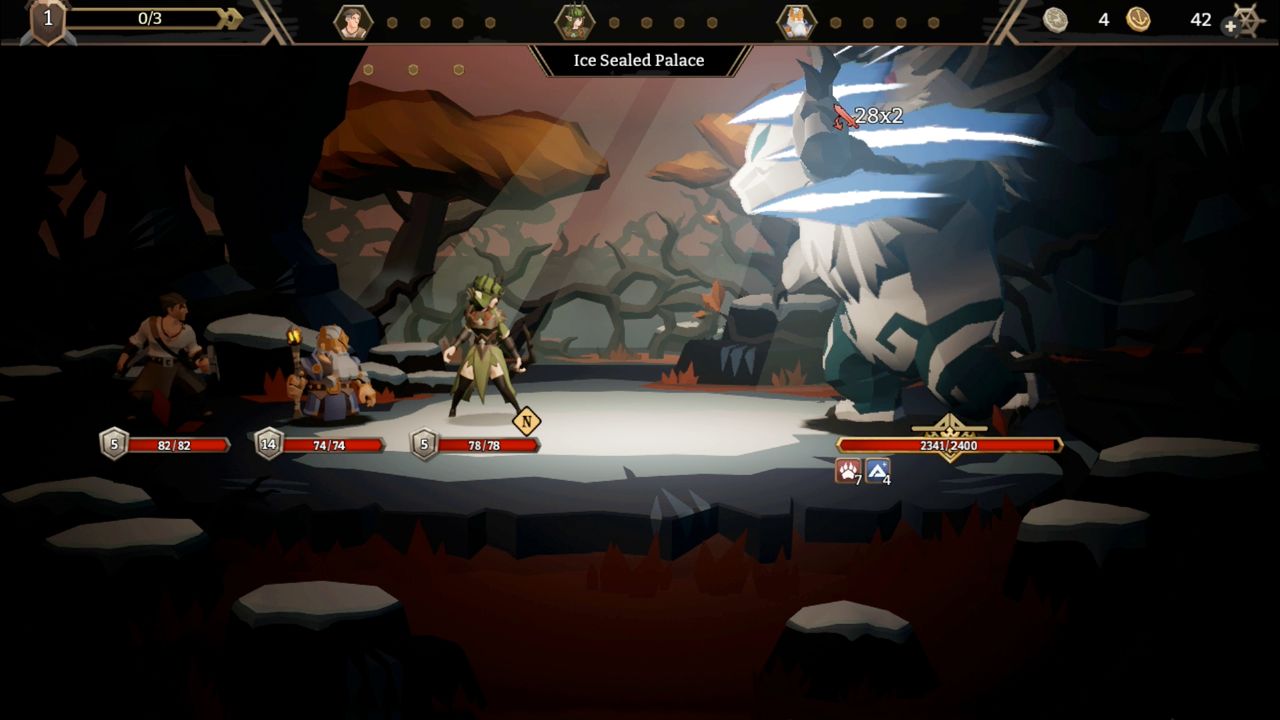 Tabletop-inspired titles often attempt to evoke their non-digital ancestors through their aesthetics, which often replicate game pieces, card art, and other tokens. While the game does a fine job of creating a tabletop world, it is somewhat surprising that its dice rolls- which are signaled by a sound effect- are not illustrated with 3D models, but rather hexagonal symbols, meant to represent the six-sides of a 1d6. This is a rare exception, however, as the rest of the rough-poly, low texture design of the map and character models definitely gives the impression of carved game pieces. A delightful surprise is the fluidity of the character animations, which gives life to all of the character and enemy models with polish and personality. The game features a very lush range of fantasy monsters, from direwolves to wizards, and even throws in a particularly lovely large boss or two, complete with similarly complex and imposing animations. The playable cast ranges from humans to cat people, although it doesn’t dip into the more monstrous side of things.

The music and sound effects in Sea Horizon aren’t the most eloquent, and their initial settings come across a bit dull and lacking depth. That is to say, they lack a reverb that puts them in a specific place, and stand out as inorganic to the game world. But the OST is still very transportative, giving a great sense of exploration and danger when the situation calls. The basic travel theme is very pleasant on the ears, and didn’t grow tiring throughout my time with the game. The soundtrack shouldn’t come as a surprise to any turn-based roguelike fan, but you might need to play around in the options a bit to get the right audio balance. 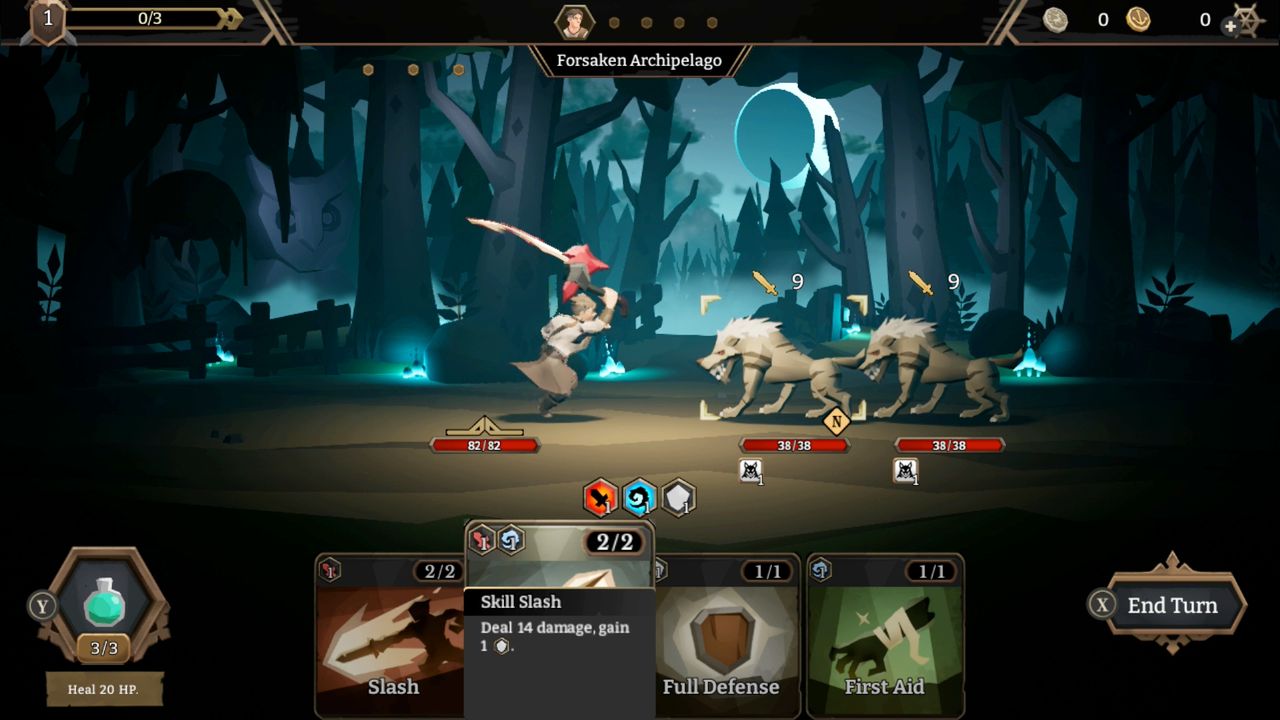 The adventure mode does feature a meager story, which plays out across a series of vignette bookends. Players learn the roles of each individual character archetype within the context of the game world, which attempt to align with their playstyle but aren’t always direct, mechanical translations. Each individual character is given impetus for their brief journey, and may also get a bit more flavor text during their small adventure before a narrative conclusion after beating a boss encounter. This flavor text is a modest effort to give context and culture to the archipelago in which Sea Horizon takes place, and though it isn’t as rich as some roguelike titles, it’s also a marked step above others, allowing the game to take its own place on the hierarchy.

In my experience playing tabletop-styled games, I have come to understand that they lend themselves towards roguelike structure. This is a shame, because the roguelike genre is not the most preferable or accessible genre for many gaming enthusiasts. As an ambassador for tabletop and roguelike design, then, I consider it my responsibility to find a suitable game to bridge this gap. For fans of deck-building, a fundamentally-sound game like Slay the Spire might be a fine entry point, but its lack of world building and emphasis on build-based runs might prove frustrating.

Sea Horizon strikes a delicate and very appealing balance. Its colorful designs and emphasis on character progression are inherently more RPG-esque than its contemporaries, despite lacking the narrative heft that one might find elsewhere in a game like Griftlands or Black Book. But that isn’t necessarily a bad thing- those games can be overwhelming immersive experiences that are juxtaposed with more simplistic combat mechanics for ease of access. Instead, Sea Horizon falls in line with games like For the King: light on narrative, but exploratory and archetype-focused. However, it forgoes some of the more obscure statistical elements of that game by focusing on easily interpreted dice symbols. Skill progression is predictable thanks largely in part to the primer the player receives in each adventure vignette, which also introduces a swath of equipment that players will find useful for designing certain builds when they strike off into the unknown. 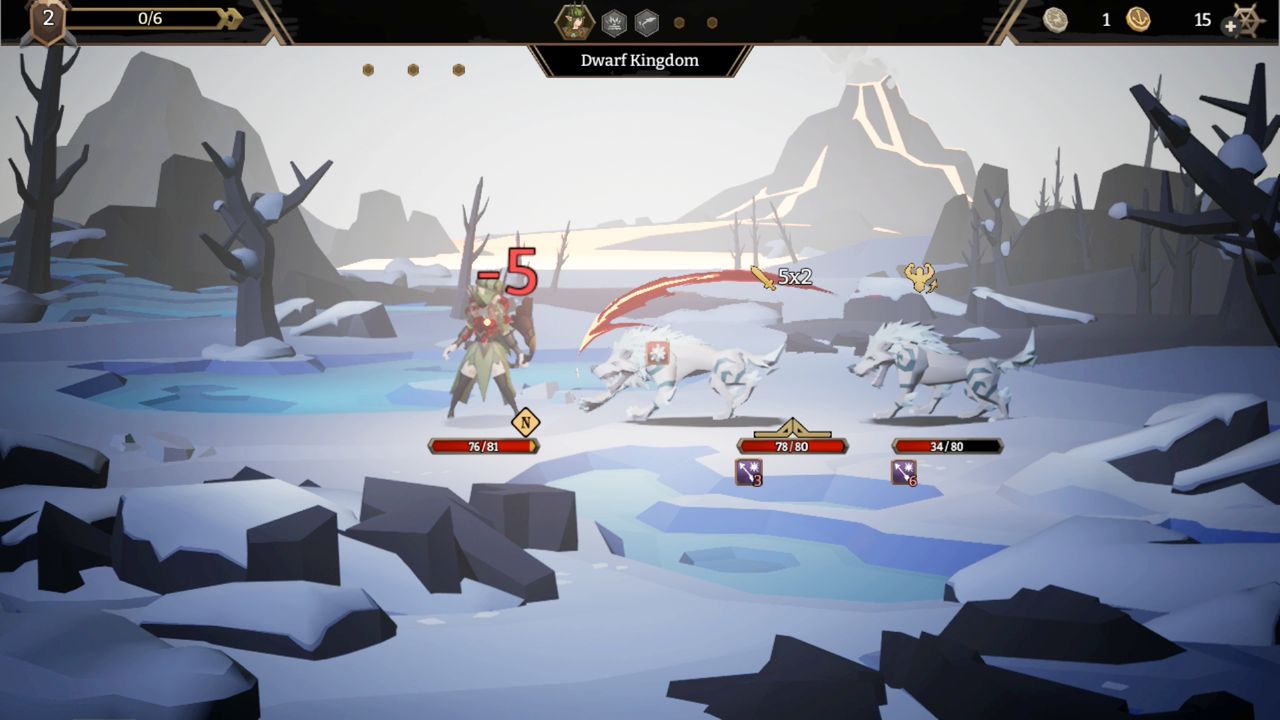 In short, Sea Horizon uses its progression mechanics and structure to ease its players into the mindset that the game requires. While focusing on single characters might result in some daunting scenarios that discourage players from further exploring character archetypes, the promise of using these characters in synergy with one another is as tantalizing as it is tangible, especially when players attempt to access the other game modes only to find their roster limited. At the same time, seasoned roguelike players might find this unlock method somewhat frustrating, though it’s no better or worse than the experience-based slow-trickle many games use to introduce new mechanics. Sea Horizon might look aesthetically similar to some previously mentioned games, but the sophistication present in its visual aesthetics is a step above other tabletop titles, though the same can’t be said of the audio balance. I try to remain as unbiased as possible when discussing this genre, but I can say with confidence that newcomers and seasoned veterans alike can find something worth enjoying from Sea Horizon.