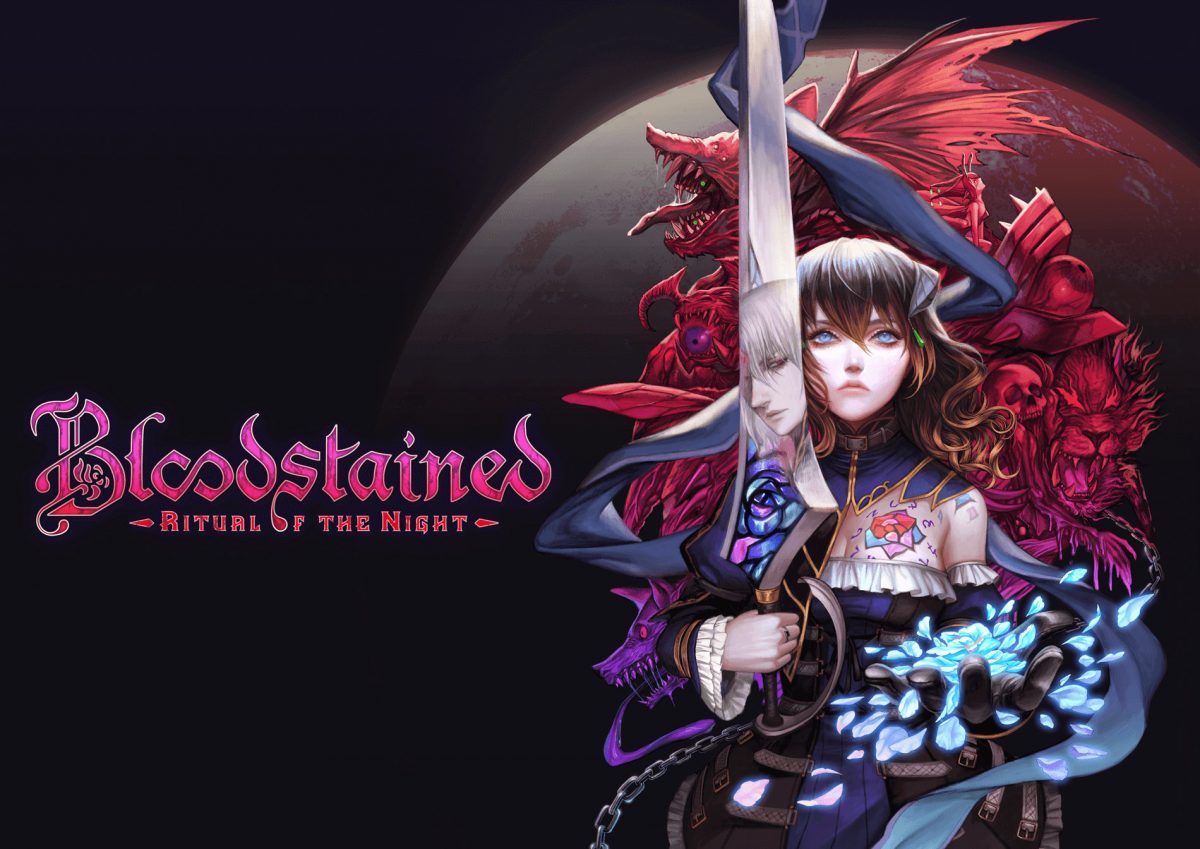 Our first Bloodstained review, written by Rich, can be found here.

In 1997, something magical happened to the Castlevania franchise, particularly for RPG fans. Led by Koji Igarashi, Castlevania: Symphony of the Night was released to critical acclaim, marking a shift from the (at that point) decade-spanning action/adventure formula in favor of meatier RPG mechanics. This design trend would continue on through the majority of the franchise’s releases for the next decade, before the powers that be would have Igarashi focus on other projects, eventually spurring an all-out – and completely unnecessary – series reboot thereafter. Igarashi left Konami back in 2014 and immediately set out to build a game that would honor the slew of titles previously released under his command – that project would become Bloodstained: Ritual of the Night. 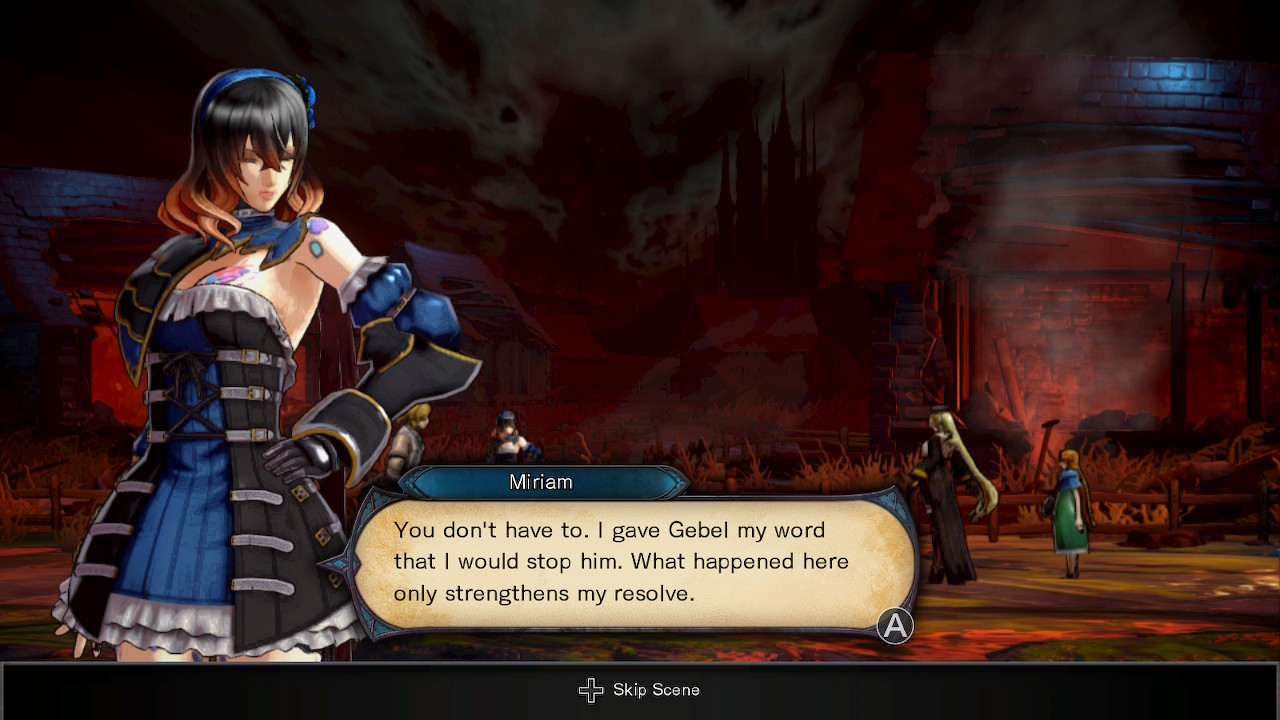 The rise of capitalism, brought forth by the Industrial Revolution, would inevitably lead to the masses dropping the “old ways” in favor of the “new”. The influence of religion, and especially alchemy, would wane in favor of new ideas and technologies. Seeing the writing on the wall, the once-esteemed Alchemy guild decided that something had to be done in order to maintain their status, no matter the cost. In an act of desperation, the alchemists turned to the dark arts, combining humans with demon-infused crystals to form hybrid beings – Shardbinders – which would then be sacrificed to, essentially, open a gateway to hell and all of its vile creatures. Their hope with this endeavor was to instill fear in those that felt they no longer needed the Guild.

While the people were able to bounce back from this horrible event, there were many casualties, not to mention the sacrifices made by the Shardbinders themselves. Surprisingly, not all Shardbinders met their demise from the evil rite. Miriam, the lead protagonist, mysteriously fell into a decade-long slumber before the ceremony could commence. Then there is Gebel, the only known Shardbinder to somehow survive the sacrifice, now leading a demonic charge once again just as Miriam awakens from her rest. Searching for answers for herself, and the motives of behind Gebel’s hellish rally, Miriam sets off towards her fellow Shardbinder in hopes of settling the matter once and for all. 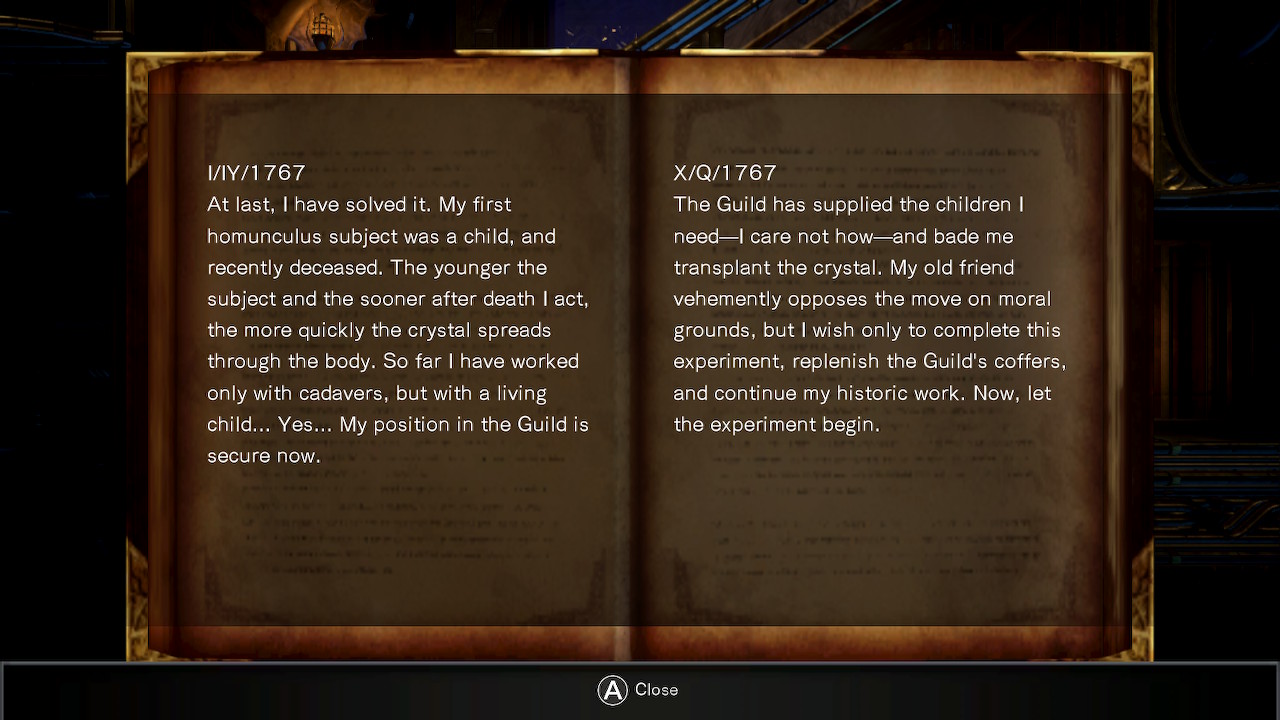 A spiritual successor to the Castlevania franchise would not be complete without a healthy dose of the macabre, right? Bloodstained: Ritual of the Night fully embraces its roots with a fantastically dark setting chock-full of all manners of demons and beasts. There’s always a castle too, and the one given here is exactly what you would expect one to be in any of the previous Castlevania titles – a large, sprawling labyrinth, beckoning you to explore its depths.

If this all sounds a bit “par for the course” for a Castlevania-esque game, you are right, but that’s not a bad thing either. For me personally, I tend to be more interested in the game mechanics and the aesthetics of these types of games rather than seeking a truly compelling narrative, and Bloodstained is no different in that regard. There are some twists along the way, but nothing that will really shock and awe the player. The narrative and supporting cast work, but aren’t necessarily the most memorable thing in the world. Let’s get on to the action, I say, like a famous vampire once said, “but enough talk, have at you!” 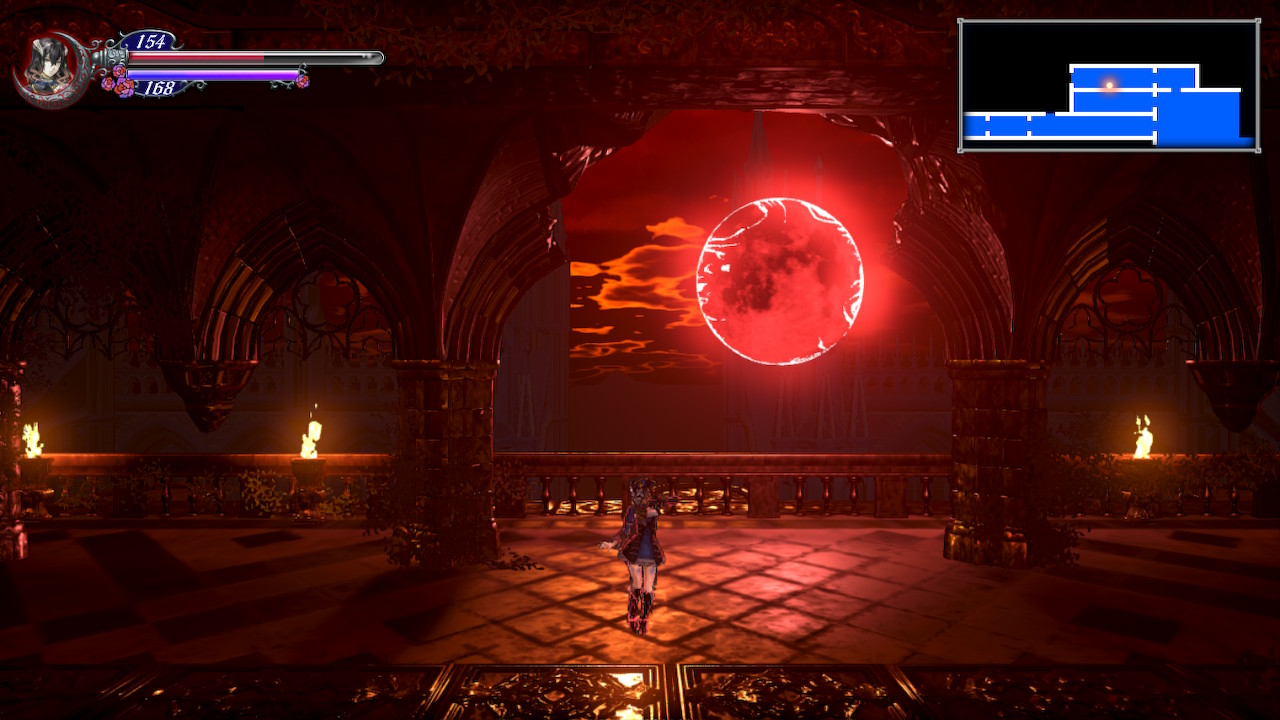 Those that have been seeking a similar experience to Symphony of the Night since, well, Symphony of the Night – like myself – need look no further than Bloodstained: Ritual of the Night. This spiritual successor plays almost identical to many of the Igarashi-directed titles, including but not limited to the aforementioned Symphony of the Night. In typical Metroidvania fashion, you will traverse a dense, complex map full of winding paths, some of which will be blocked until you acquire the proper item, equipment, or ability, in order to progress further.

Subgenre ability staples, such as the double jump, make an appearance once more, alongside some new/remastered arts, like the water…shooter (the real name escapes me). I can remember this “water shooter” simply because it leads to a platforming sequence that brought to light some repressed memories of those dang water stages in the NES TMNT game – I’m overreacting just a bit here, but you get my point. Outside of the silly water mechanic, the platforming and supplementary abilities feel smooth despite some performance issues, which will be discussed in detail later. 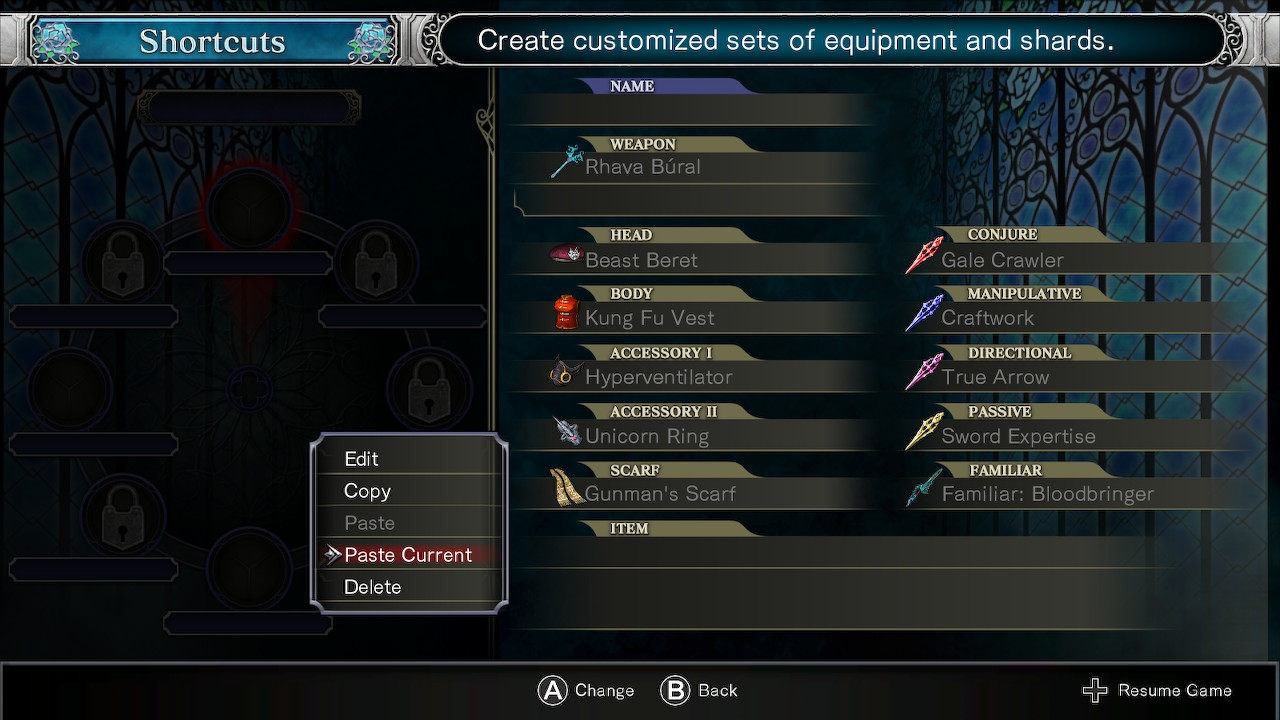 Miriam has access to a variety of weapons; from the iconic whips and swords to the more unconventional weaponry in the form of guns, along with spears, clubs, footwear, and more filling in the gaps. Each weapon type has their own pros and cons, though you’ll probably find yourself sticking to one or two unless absolutely necessary – I found many of them to be situational at best, specifically when it came to the slower weapons. Granted, enemies do have certain weaknesses that can be exploited by changing things up, but I did not find that entirely necessary, save for a couple of scenarios, during my normal playthrough. Time will tell whether weapon type swapping becomes an essential component for the two higher difficulties, however.

As a Shardbinder, Miriam will be able to absorb the essences of slain foes, allowing her to equip shards for various active and passive bonuses. Absorbing the same powers multiple times over will make that shard more powerful, and you can also upgrade them from your base of operations through Johannes, the friendly alchemist. Shards absorption is not guaranteed – you may have to slay the same foe more than once before you acquire their essence. Excess shards can also be sold for a tidy profit, should you find yourself strapped for cash. 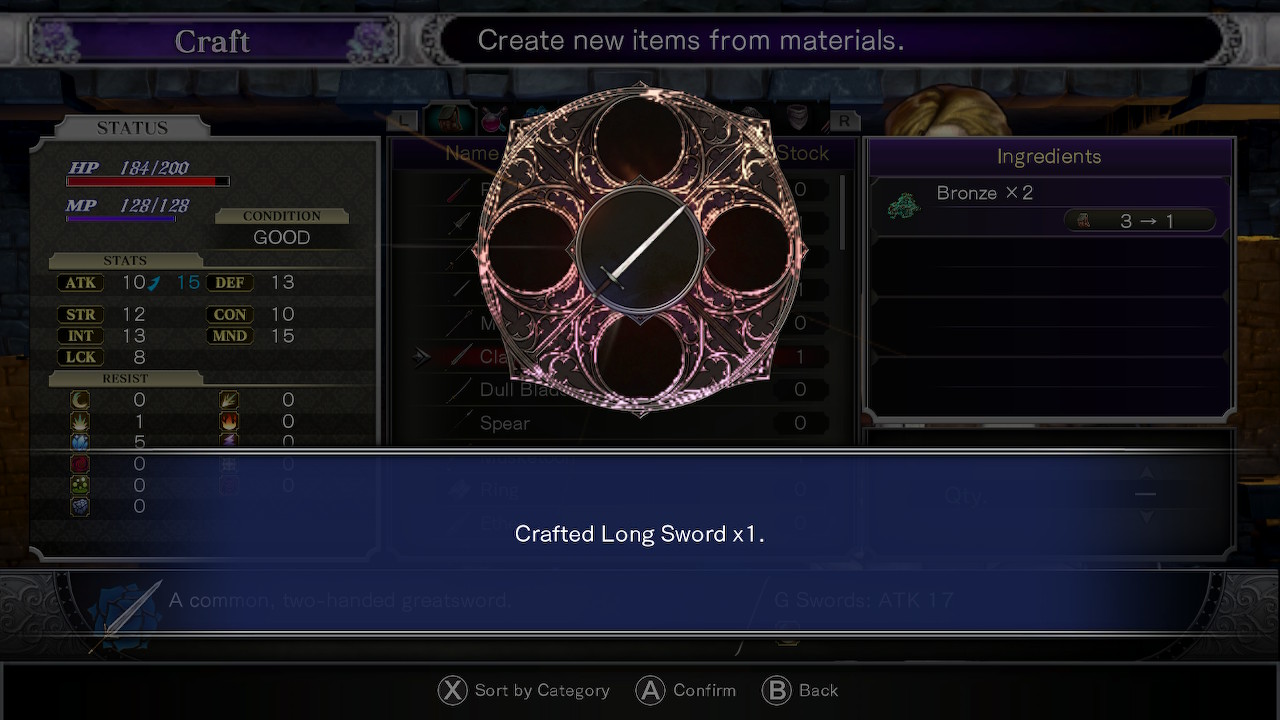 Back to Johannes, this guy gives you the ability to craft your own items, cook food, enhance shards, and dismantle equipment. While your recipe book starts out small, you’ll add to it quite a bit over the course of the adventure. Johannes does not charge for this service – he only requires the ingredients for the craft itself. Enemies will constantly be dropping crafting components, so this is a great way to save some money. Crafting items also expands the sundries available from the “general store,” run by Dominique nearby, meaning if you have the cash, you won’t necessarily have to craft the same items after crafting them the first time.

The cooking system is a bit of a mixed bag though, providing minor permanent stat bonuses for Miriam at the cost of a frustrating hunt for ingredients. I despise cooking mechanics in games which require a boatload of random, hard-to-find ingredients to create, so this could just be a “me” thing. Either way, the first-time stat bonuses are nice, but their actual healing properties aren’t really worth the effort. Using a consumable called alkahest, Johannes can also break down old equipment into base ingredients. Due to the cost of the consumable itself, I did not find this feature incredibly useful, though it could make for some easy-to-receive rare materials in some cases. 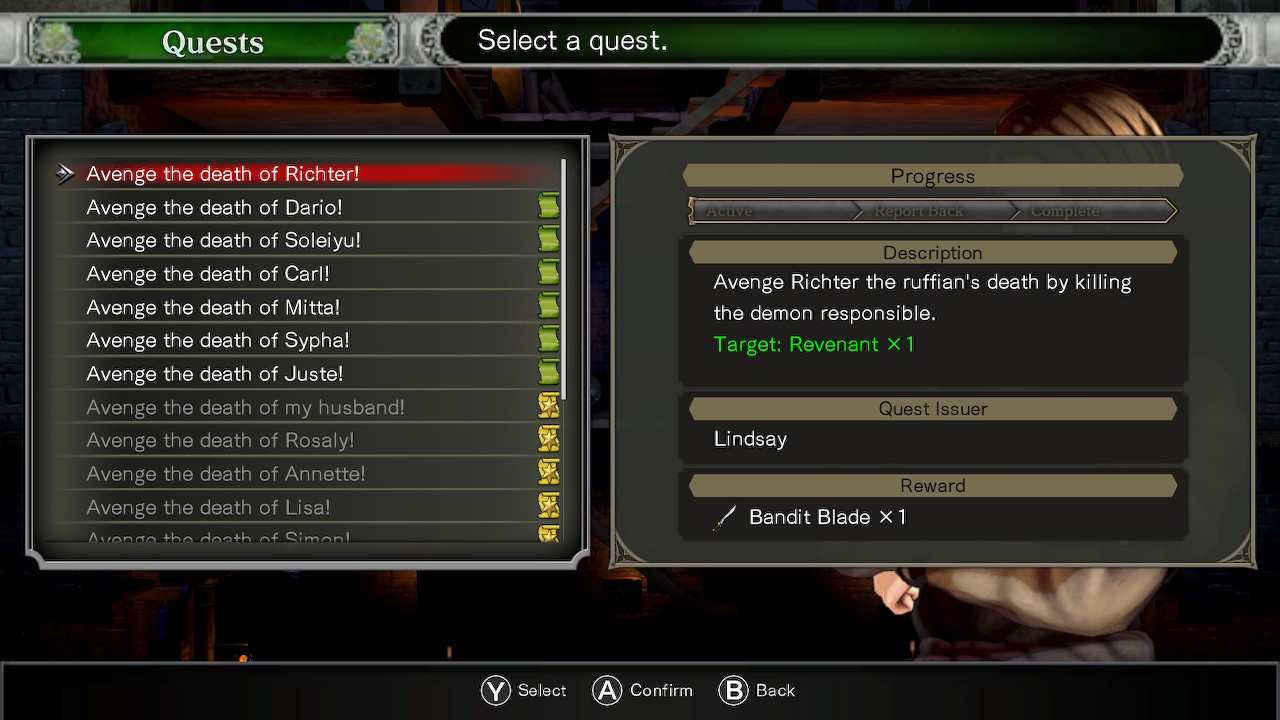 Besides your main hunt, you can take on various side quests along the way, though their implementation is more akin to a basic objective checklist more than anything. A couple of NPCs will provide some very barebones kill / item requests which will provide various rewards upon completion, and I call these objectives simply because they have no real story component attached. That said, they are easily completed organically as you progress the game, so they’re generally worth the trouble despite not being the most exciting of tasks.

Overall, if you’re looking to scratch that gameplay itch left from Igarashi-directed Castlevania games of yesteryear, Bloodstained will gladly do that while offering some more modern Metroidvania conveniences. 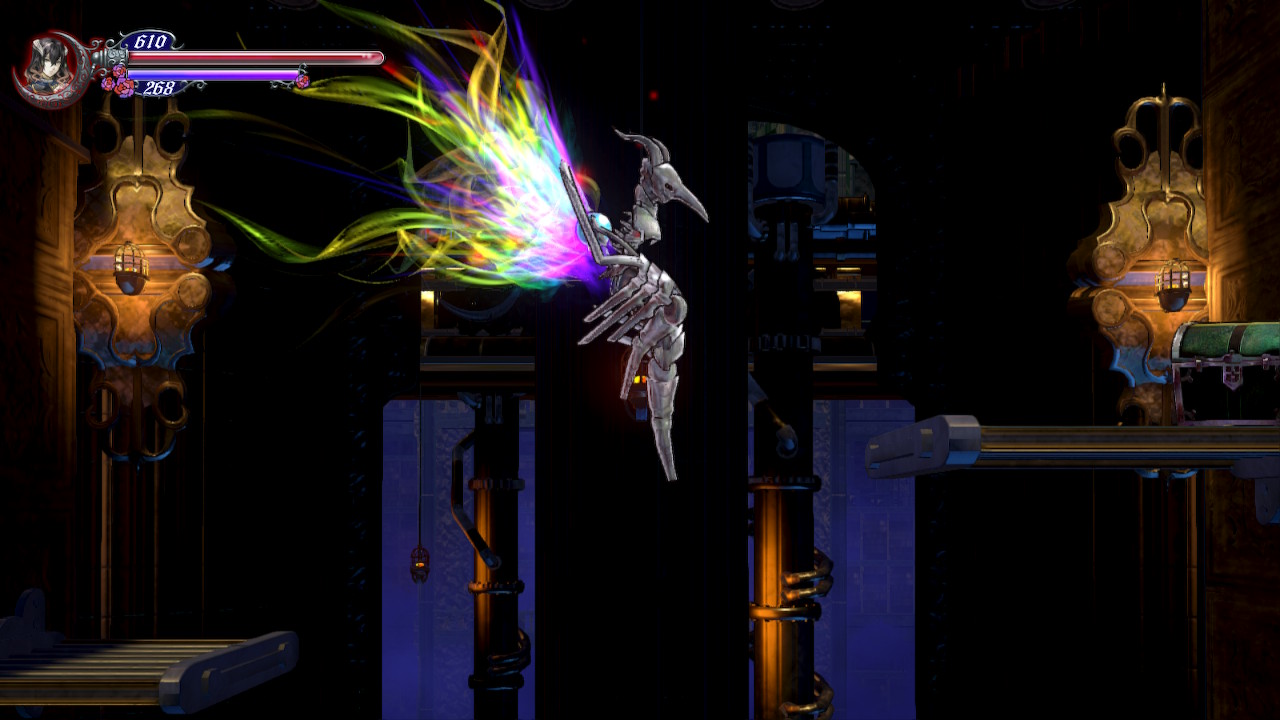 Bloodstained: Ritual of the Night drops the pixel art design in favor of a smoother, more modern approach. While credit must be given for environmental variety – the design of some areas is breathtaking – I’m not a fan of the new style whatsoever. Characters, especially in cutscenes, have a weird “early PS1” look to them, and not in an admirable way. Perhaps the throwback to an early 3D character design is intended, but it just wasn’t for me. The graphical quality, in general, is already downgraded here in comparison to other platforms, and I feel like this wouldn’t have even been an issue if they just went with pixel art in the first place.

Not only that, but the pixel art approach might have helped improve performance across the board. I’ve heard that all versions of the game have their own demons (no pun intended) but the Switch version, apparently, is the worst of the bunch. While I’ve yet to experience a game-breaking bug or crash, performance, in general, is still pretty lackluster. 30FPS is supposed to be the norm here, but sometimes it fails to achieve even that. Load times between areas can be hit or miss as well, ranging from a second or two, to about 10 seconds, randomly. Sometimes, abilities will freeze the entire screen for a few seconds, though this behavior was not too common when considering the length of the entire playthrough. Performance on the Switch needs work, but the devs have already promised performance patches as soon as possible. 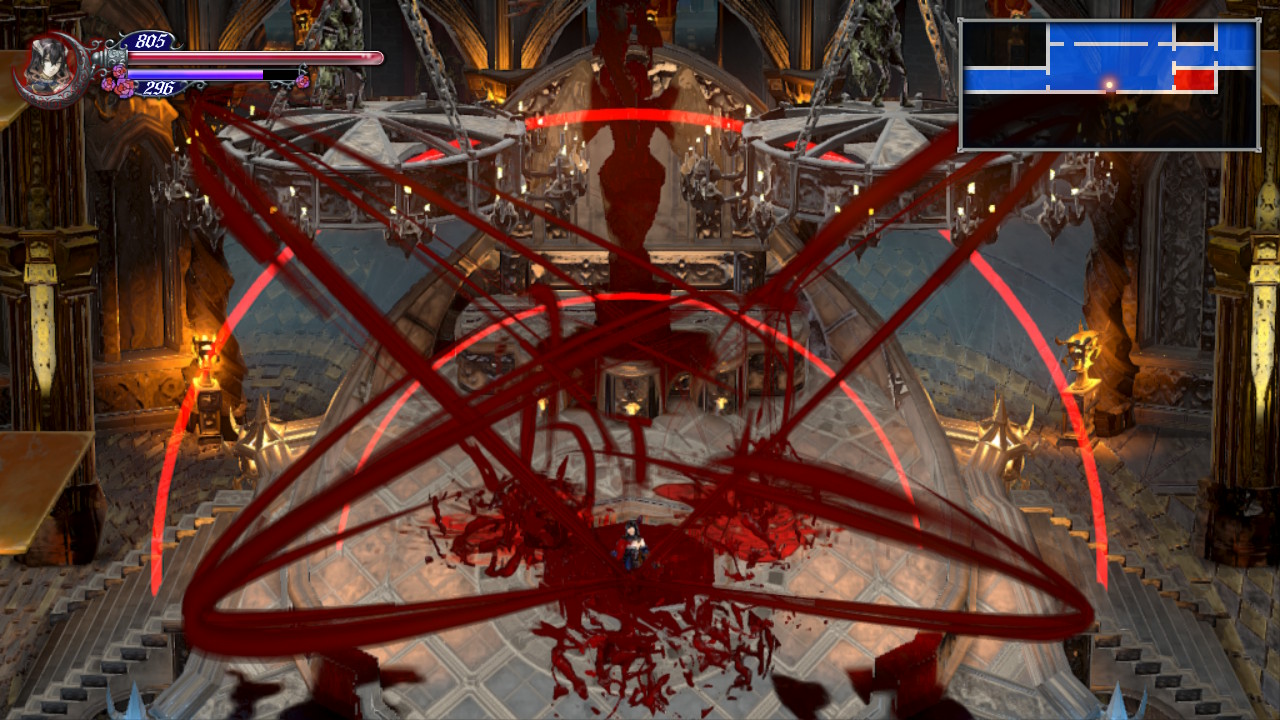 Michiru Yamane, legendary composer from the Igarashi-directed Castlevania games, returns once again to compose for Bloodstained: Ritual of the Night. While she absolutely does not disappoint with the work here – stunning, compelling, and varied tracks abound – it did not resonate with me as much as I had hoped. This could stem from Symphony of the Night being one of, if not the my most favorite soundtrack to date, so expecting another to be on that same level is a tall order. Regardless, there’s lot to enjoy here with Yamane’s work. The English voice acting is alright – obviously much improved over the “you seem human and yet, what do you here” days – but I still chose to turn it off early, more so to squelch the in-combat voice effects though.

Performance woes aside, the graphic and audio presentation, as a whole, works fine although it does not manage to tick all of my boxes.

Igarashi fans have waited a long time for the Castlevania series – whether it be under the official, decades-old franchise banner or otherwise – to return to form, and Bloodstained: Ritual of the Night is a worthy successor. It is a slower Metroidvania in regards to combat, which may be a bit jarring to those more accustomed to faster-paced, “modern” titles in the subgenre. But the wealth of meaningful RPG mechanics makes it an easy buy for RPG fans. That said, if you have the choice of playing it on Switch, or another console, consider the latter. Performance improvements are coming, but there’s no guarantee that those adjustments will bring it up-to-par with the other versions.