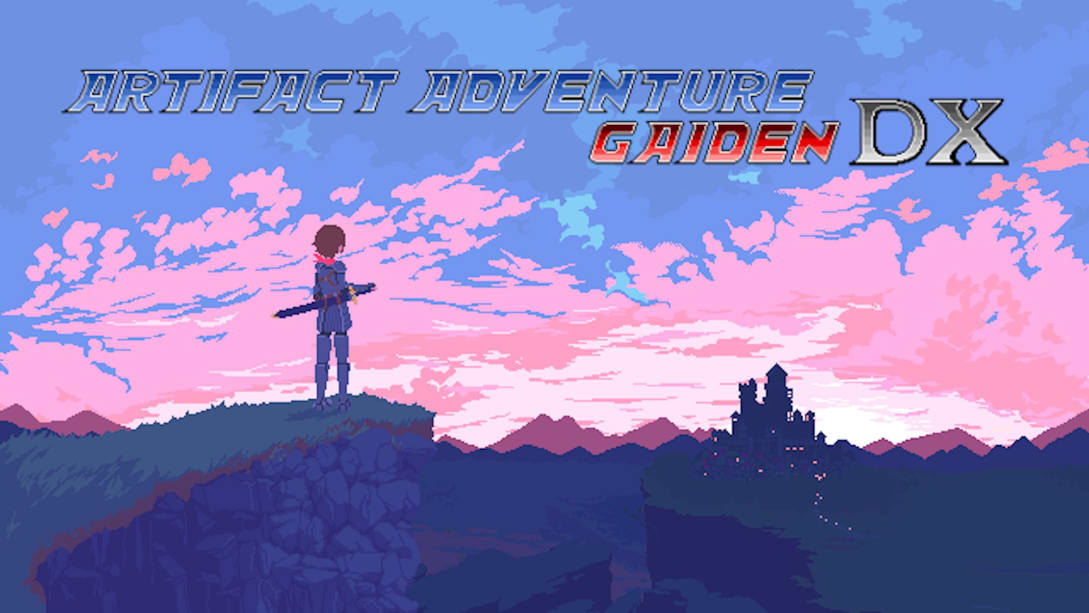 New games, designed to tap into the nostalgic reserves of its players, are in no short supply these days. I’m not complaining though – as a child of the ’80s and ’90s, I get giddy with excitement whenever a new, retro-inspired RPG pops up on the market. Admittedly, part of the reason is because I know what to expect – many of these new games hearken back to genre roots, while sometimes offering modern tweaks. As a whole though, they often do not stray far from their source material, and I’m okay with that!

It is for these reasons that Artifact Adventure Gaiden DX has impressed me immensely, seeing as it aspires to portray the retro front while offering a somewhat modern open world design, complete with a meaningful choice and consequence system. How successful is it in doing these things? There’s only one way to find out. 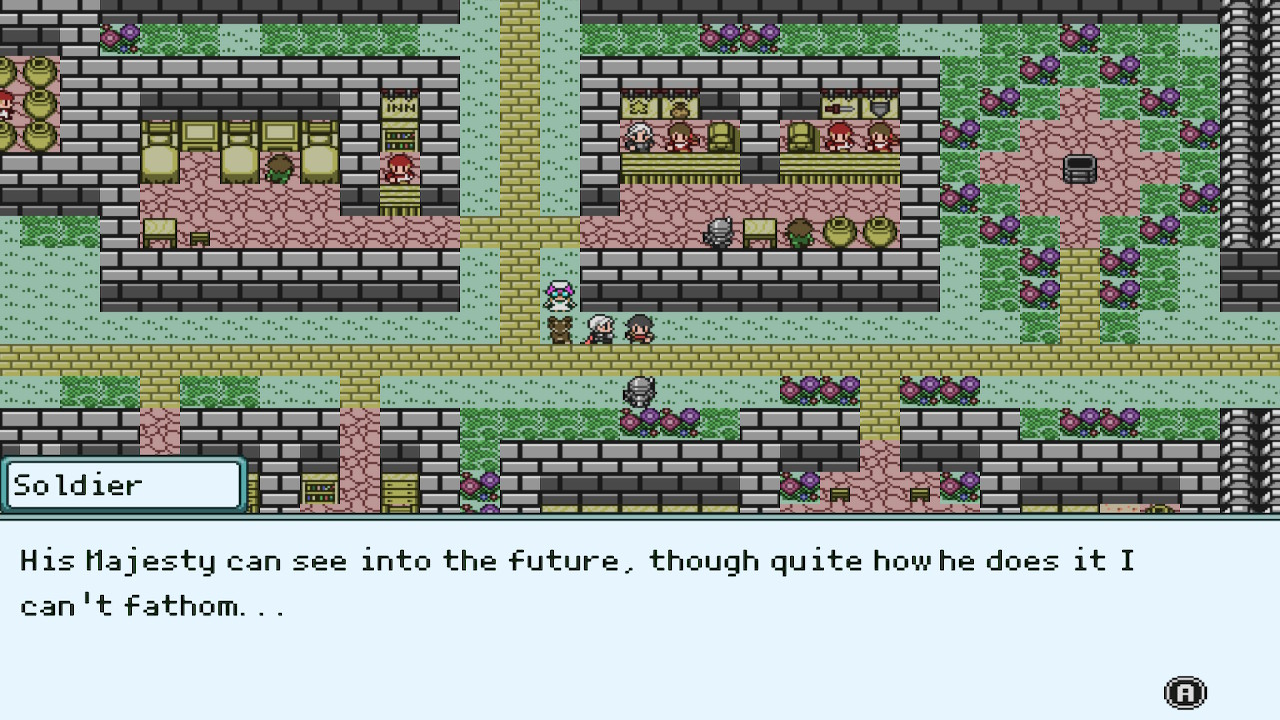 The nameable “hero” of this story is taken in by the king of Regulus after his hometown is completely destroyed by an unknown entity, which some – including the the king – believe to be known as a Cataclysm. This event also robbed the hero of their memories, and it has been prophesied that another Cataclysm will destroy the world within three years. Sensing great power within you, the king lays the heavy burden of “doomsday prepping” upon your shoulders, asking you to go out into the world (in his name) in order to best prepare for what is to come. The decisions you must make along the way will not be for the faint of heart – in fact, many of the choices will forever change the world and its inhabitants. Will Timmy, from that incident with the well, prove to be beneficial once the Cataclysm arrives, or will he spawn a whole new set of problems? Only time will tell.

Artifact Adventure Gaiden DX is a doomsday prepper’s dream come true. Before the Cataclysm hits, you have as much time as you’d like to prepare for the event. You are encouraged to travel the globe, assisting in all sorts of situations and events as you see fit. Most of these subquests provide their own subplot within the overarching narrative, and it is exciting to see how the scenarios unfold later in the adventure, based on your decision making up to that point. While it isn’t always clear how or why certain events pertain to the main story, if at all, they always provide a means to improve both your standing with the king and your capabilities as a hero. Even so, every decision you make will, let’s just say, “ring through” to the very end of your adventure. 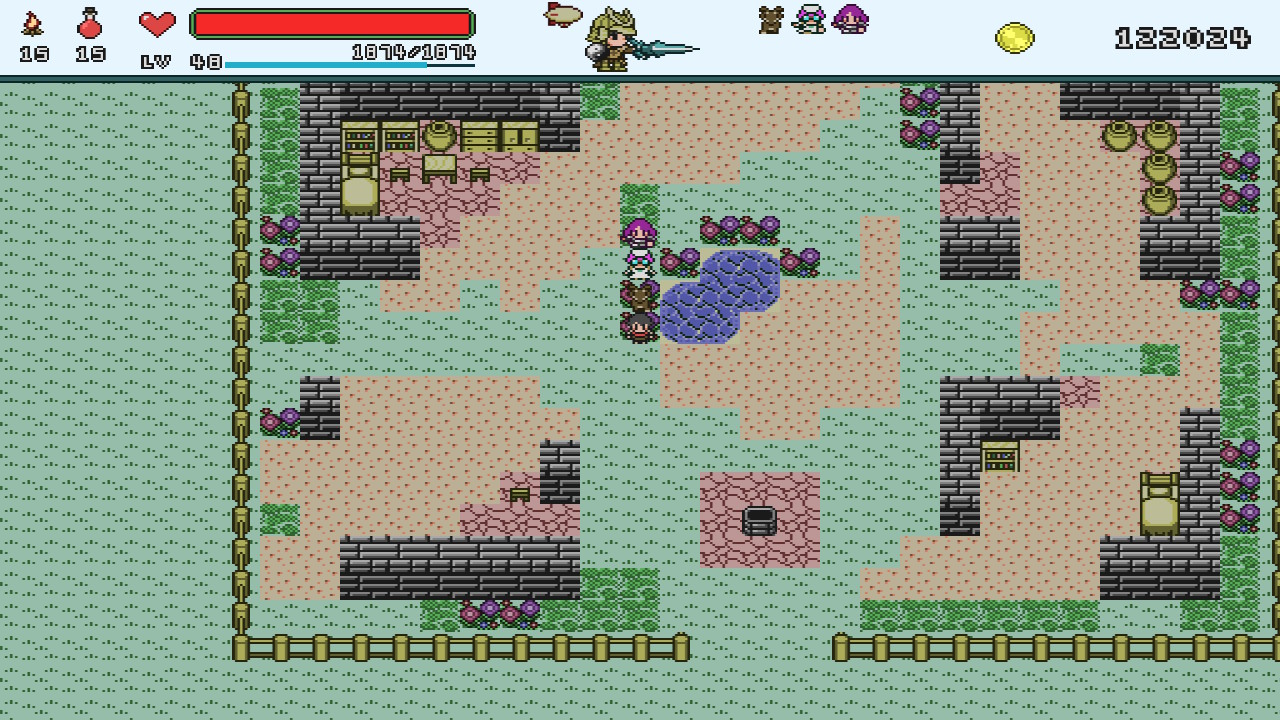 Before you set off to prepare for the Cataclysm, you must build a party! The hero can befriend one of three major companions and two of six volunteers, with the former’s capabilities directly impacting the game’s progression. The nobleman will gladly open his coffers for you – allowing lots of front-end wealth for early investment in powerful equipment, the veteran knight will provide an incredibly powerful skill for use in-combat, and the seasoned explorer has access to pretty much every fast travel point from the outset. Each of these choices are useful in their own way, so there is no wrong way to go about it.The same goes for your volunteer selection – each of them provide bonuses that can be useful in many situations. Perks range from improved healing ability and hidden passage usage, among other bonuses, including a slew of passive benefits. Keep in mind that your choices are locked in for the duration of your run, so choose wisely…or plan on playing again!

Combat and exploration are the meat and potatoes of Artifact Adventure Gaiden DX. Battle commences in one of two ways – on the world map, enemies spawn in a Zelda II-like fashion, while touching spider webs in dungeons will, for some reason, piss off the local wildlife bad enough for them to attack you. Combat itself uses a “bumping” system akin to the early Ys games, albeit in a horizontal platforming-esque way rather than the standard cardinal directions. Bumping into an enemy will deal damage to them, and the same principle applies for how they dish it out to you. Verticality via jumping, as well as various weaponry, and active and passive bonuses in the form of Artifacts, make things more interesting however, but every encounter can still be boiled down into this basic concept: get up close and personal as needed, and evade enemy’s attacks whenever possible. 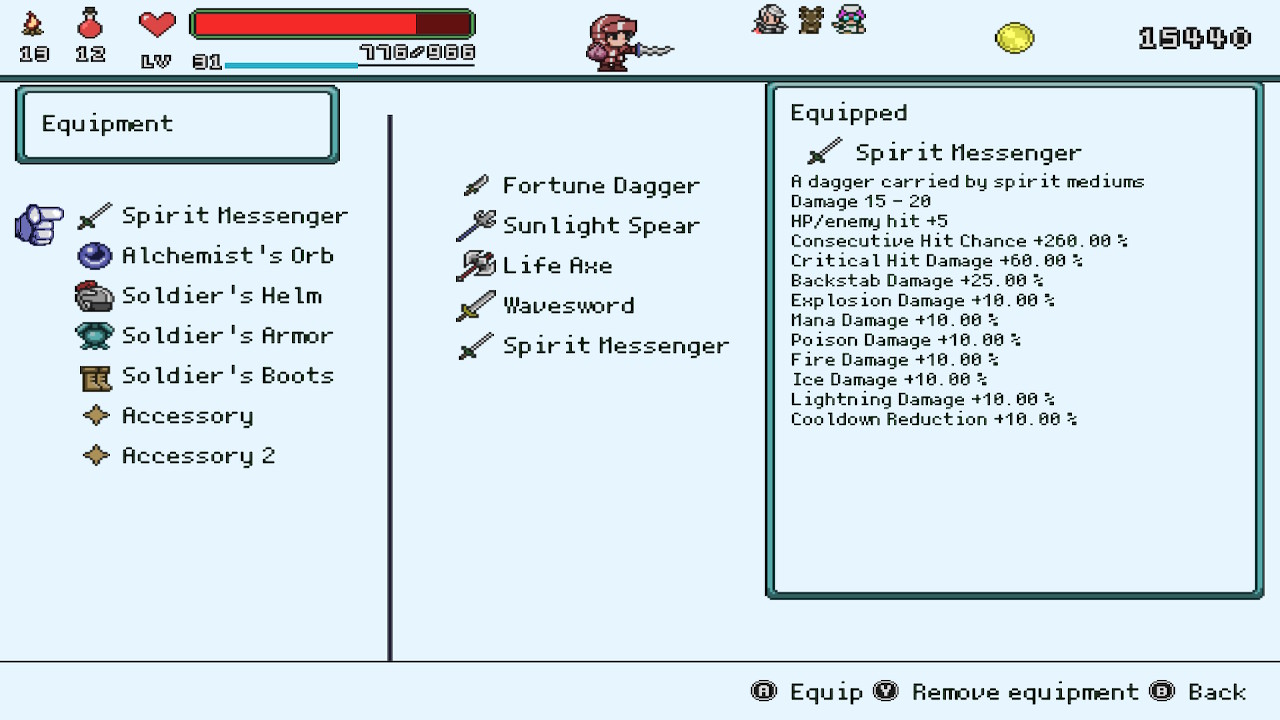 Equipment, including Artifacts, can drastically change how you approach combat. Swords, spears, rapiers, daggers, and other weaponry have their own pros – some might extend the range of your attacks at the cost of less damage potential, while others may have a very short attack range but be absolutely devastating in the hands of the deft. Not only that, weapons can come with various bonuses, including additional backstabbing damage, increased chances for consecutive hits, and more. Armor has their own perks too, meaning there is a ton of customization when it comes to equipment alone. Artifacts will be discovered over the course of your journey, and they serve as active and passive abilities for the hero. There are a metric ton of these – too many to outline here – but like standard equipment, they will change up how you approach combat situations.

Exploration is both a strength and weakness of Artifact Adventure Gaiden DX. On one hand, the world is fairly large, with lots of dungeons, caves, villages, and other locations to discover. Despite each destination serving a purpose, whether it be for the hero’s gain, to complete a side quest, or even progress a companion’s story – yes, your chosen companions each have their own mini storyline – they lack cosmetic variety, which can become a drag over time. I’d wager that a solid 3/4 of the total areas are either a cave, or a town, both of which pull from the same sets of graphic tiles almost every time.

I don’t think this is asking much – if you have 12 towns, why not style a portion of them in grasslands, another in snow, and maybe some in the desert? At the very least, you could just palette-swap the existing tiles to achieve a similar effect. Although the locations can get boring because of their seemingly never-changing appearances, I still enjoyed traversing most of them since there was always a reason for going there. You can freely tackle the game’s numerous dungeons in the order of your choosing, but keep in mind that certain areas have specific level ranges attached to them despite the across-the-board level scaling feature. In other words, don’t ignore the wise words of the king, instead jumping head-first into the fight with the final boss – he/she/it is still going to be a million levels above you. 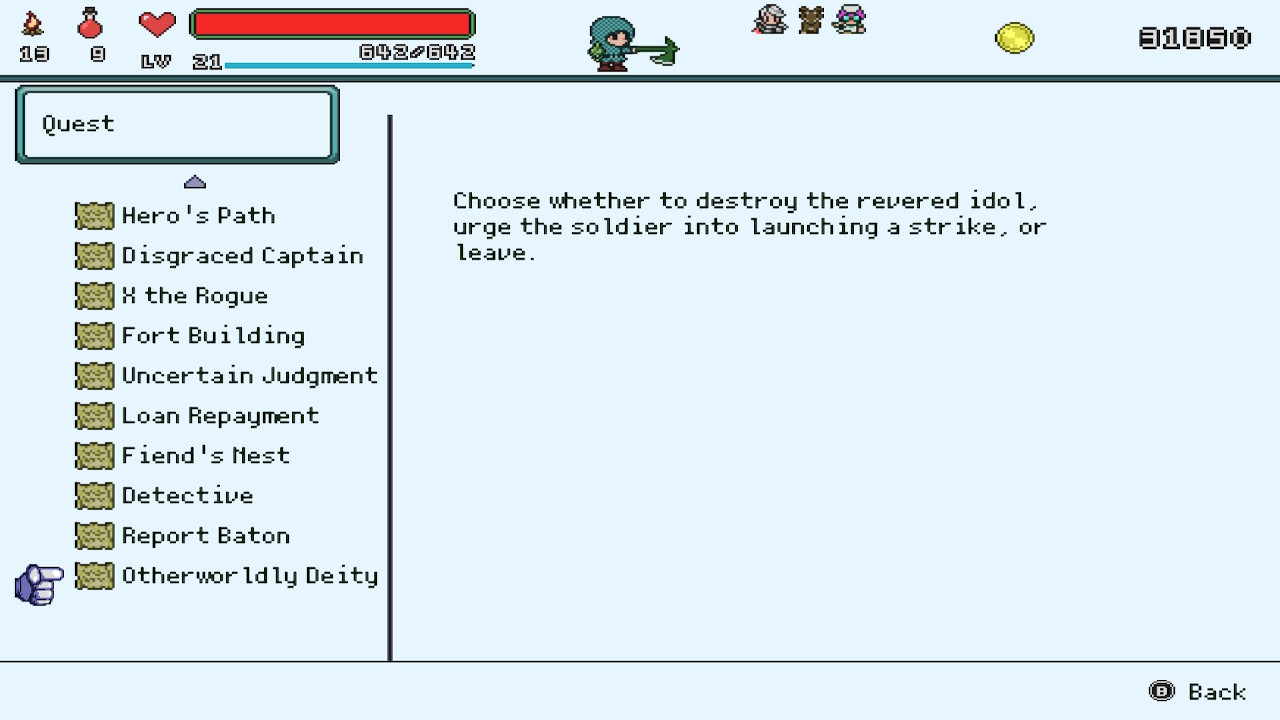 Artifact Adventure Gaiden DX also suffers from some inventory and UI issues. There is no easy way to compare two pieces of equipment, especially if you are browsing for potential upgrades at a shop. It is also too easy to mistakenly buy or sell something you didn’t want to – I can’t tell you how many times I sold a piece of currently equipped gear by accident. Quest tracking leaves a lot to be desired too, specifically when it comes to turning them in after completion. Some quests are detailed better than others, circumventing this issue, but it would have been nice to have seen this design applied to all sub-objectives rather than just a handful.

At its heart, Artifact Adventure Gaiden DX emulates the aesthetic of a Game Boy game, and does so rather nicely. Remember when you could change the palette of a Game Boy game on your Game Boy Color? You can do that here too! I found the default palette to be ideal for long play sessions, but it was entertaining to throwback to the classic “Game Boy Green” at times. The aforementioned lack of variety, when it comes to tiles, also plagues characters and NPCs a bit, but the enemy variety and flashy combat animations help offset the issue when viewing the game with a wide lens. Speaking of lenses, perhaps the most egregious thing about the graphics is the overall scale of your view. In short, it is a bit too small for my tastes, and I would have rather seen something a bit more “zoomed in” even at the cost of a reduced field of view. 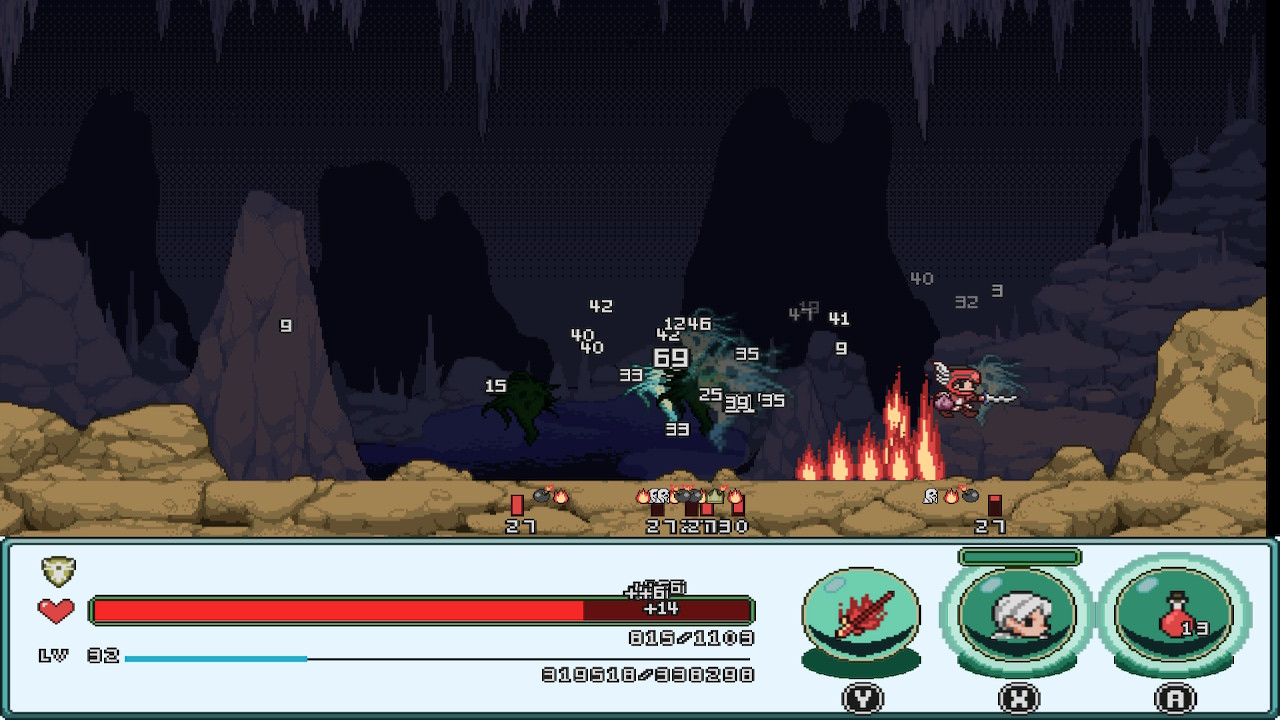 The composer(s) of Artifact Adventure Gaiden DX went beyond mere retro inspiration, instead living and breathing that Game Boy-esque chiptune goodness as if the game actually came from that era. The soundtrack is just awesome, from the jolly town theme and chilling dungeon tracks to the rocking combat tunes – the biggest disappointment lies in not being able to source the album outside of a very barebones Soundcloud sample. Seriously, the audio content here is easily among my favorite chiptune soundtracks.

Artifact Adventure Gaiden DX, as a whole, does a wonderful job of going beyond its inspiration, offering a Game Boy-like nostalgia trip with an ambitious open-world and a meaningful choice/consequence component. It isn’t perfect mind you – the inventory and UI issues can be a pain at times – but the replay possibilities for such a low priced game (that isn’t a randomizer/rogue-like) is certainly commendable, thus it earns my recommendation.