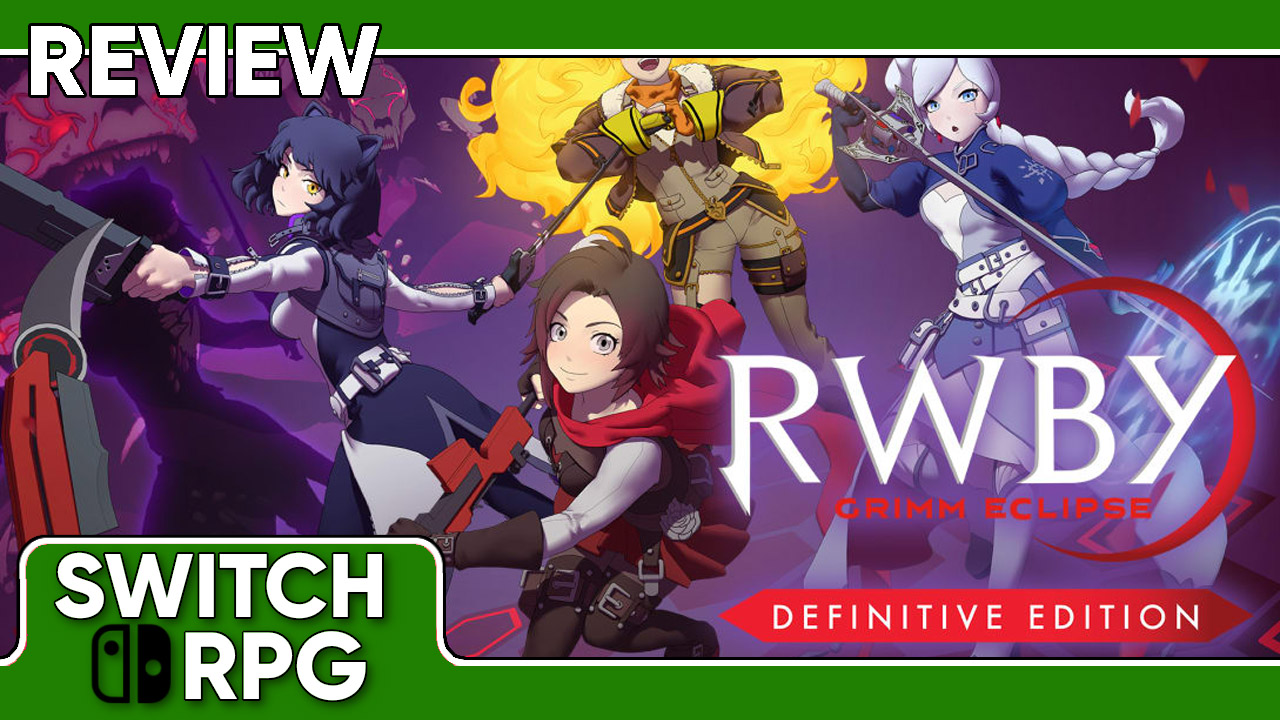 Anime games fall into one of three categories: either they chronicle the canonical escapades of the main characters, present a side-story, or are pure fan-service titles. Sometimes, that last one blurs into the previous two, but as I have strayed further and further from the ability to consume media, I find myself enjoying titles that fall into the first of the three. Give me the lore dumps, the forced narrative explanations, the character bios in menus- I want it all. 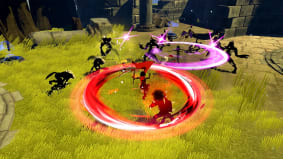 RWBY: Grimm Eclipse is a squad-based, co-operative action game with some very light RPG character progression mechanics. Players can choose a variety of modes during which they will fight many, many enemies called Grimm. If you’re looking for a gameplay equivalent, think of a more linear Dynasty Warriors experience. Levels shepherd players from one arena to the next, varying in design and topography, and sometimes possess some light puzzle-solving and objective variety.

The eight playable characters featured in RWBY: Grimm Eclipse have the same set of abilities available to them, with some slight variations. You have light, heavy, and ranged attacks, a dodge-roll, and a parry/team attack/finisher button that essentially boils down to “contextual actions.” Similar to the aforementioned Dynasty Warriors, you can string together light attacks into heavy finishers, and ranged attacks more than often hone in on enemies, but vary in range based on your playable character. There is some variety to be found among playable characters, with some having longer-ranged attacks and some having replacements. You will occasionally see a button prompt appear above an enemy in-range, and if executed in time, you’ll parry the attack and be able to tear into the enemy further. After you have dealt enough hits, you can activate an ultimate attack by pressing the right and left bumpers simultaneously- doing so before the threshold is met will result in a taunt.

You can play through the original story mode with some commentary from characters appearing in between skirmishes, and the Definitive Edition allows for local and online co-operative gameplay. You will need online functionality to take full advantage of the game’s Gauntlet and Horde modes, which task players with endless waves of enemies and tower defense-style alternate modes. 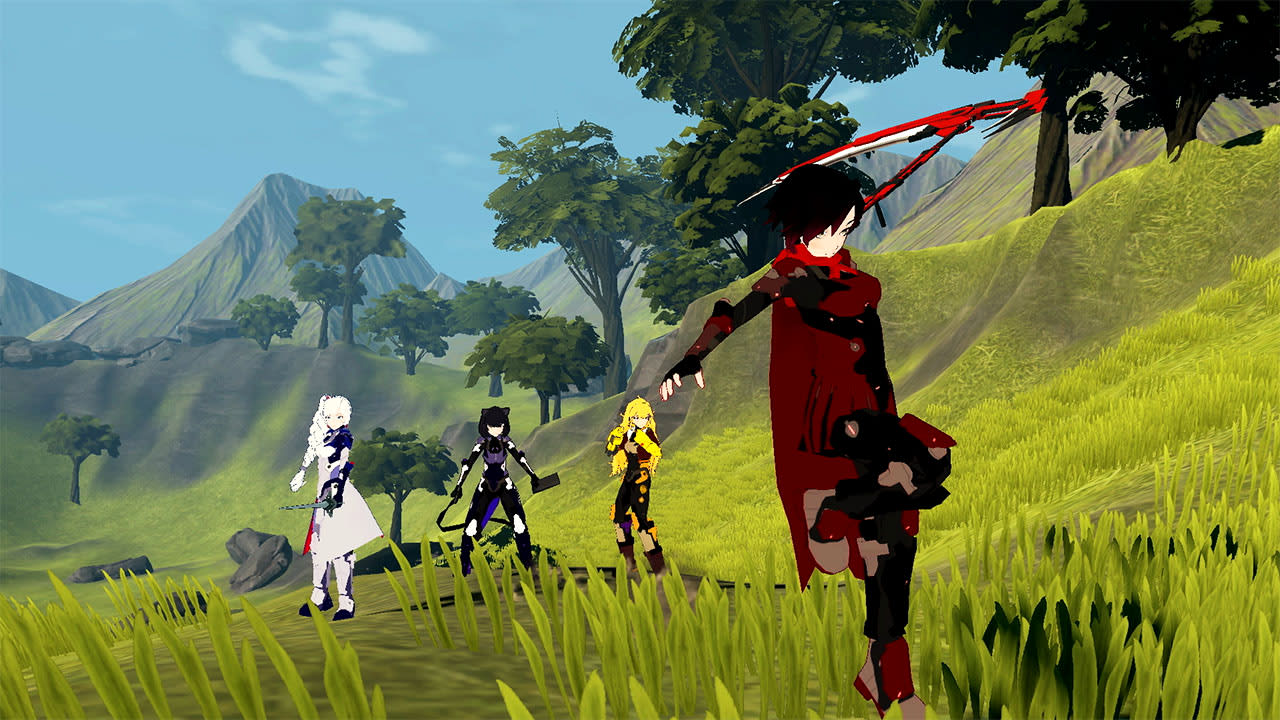 Grimm Eclipse’s narrative is about the team discovering a never-before seen or mentioned antagonist performing some experiments on the wicked Grimm, which are some evil critters made by the God of Darkness, or something. To be honest, the game never explicitly states what Grimm is, so I had to look up a Wiki article to find out. Again, because of Grimm Eclipse’s nature as a gaiden, or spin-off work, characters and world-building are overlooked, with the understanding that fans have a familiarity with such details. Fortunately, the mission-based structure of the plot and game allow for a fairly basic, straightforward narrative: the bad guy is doing bad things, and therefore must be stopped by traveling the world and completing objectives.

If you are familiar with the work of the late Monty Oum, you won’t be surprised by the nature of Grimm Eclipse’s aesthetics. The game will take you to a number of fantasy- and dystopian-inspired locales that have little unique flavor to them, and you’ll take control of elaborately-costumed, anime-inspired characters in order to kill out some demonic creatures. The music, which is composed by RWBY series veterans, is action-oriented and fits the mood of the game, but it doesn’t work itself into the brain due to its similarly generic stylings. Unfortunately, the sound clips for the characters are not in a high enough quantity to avoid becoming repetitive and grating. Most of the voice acting featured comes across as hokey, really. 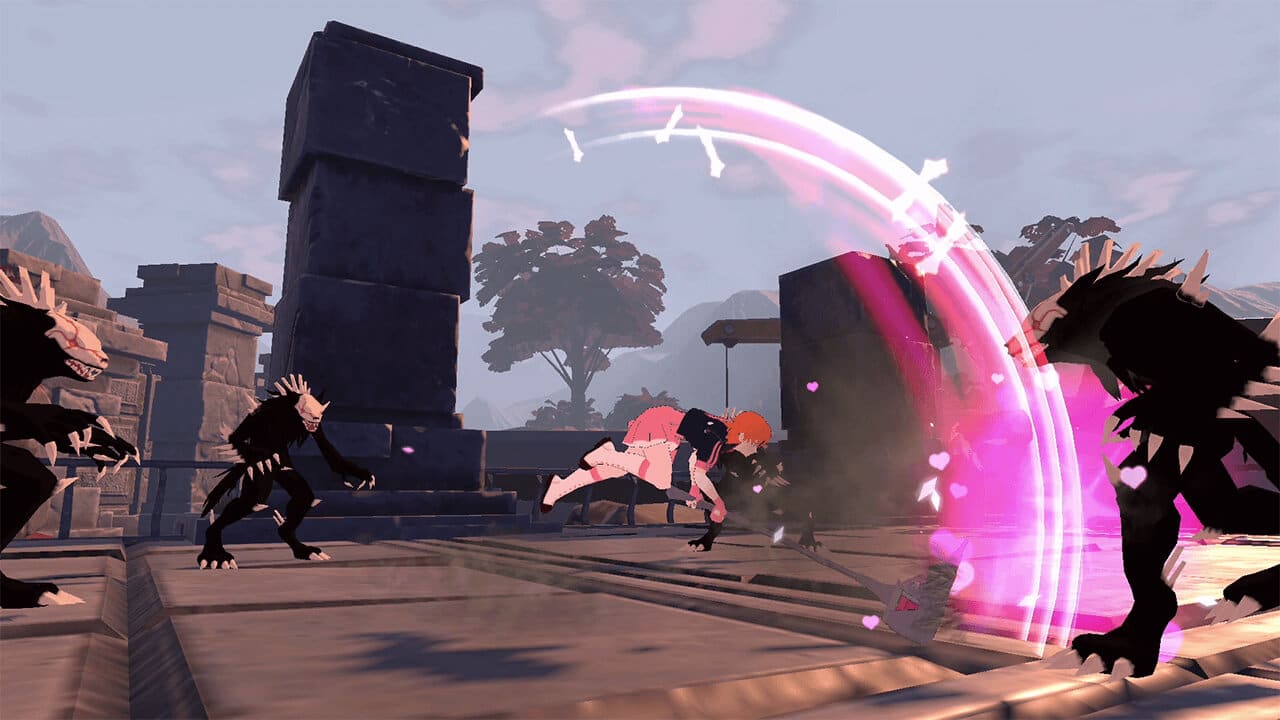 At least the character models are well-presented, with a balance of weighty, yet dynamic animations reminiscent of the series. The camera never draws too close to these models, which is perhaps a good thing, but the color balance in their design helps them stand out and remain easy to follow against the environments. You are also able to access a number of alternate costumes for each playable character, from school outfits to elegant dresses and pajamas, but the models themselves and the outfits selected never manage to reveal any intimate detail or appear overly-scandalous.

There’s really not much else to say about Grimm Eclipse, and I think it is important to note that, unless you consider yourself a diehard fan of the RWBY series, there’s little reason to purchase this game. Even if that is the case, I think Grimm Eclipse teeters on the edge of being an enjoyable experience, and is largely reliant on some very specific circumstances in order to truly have fun. When I think of RWBY, even with a minor understanding of the characters and lore, the expertly-crafted fight choreography and sequences come to mind, and while Grimm Eclipse’s animations are in the spirit of the series, they become repetitive far too quickly. Because combat is so heavily ground-based, there’s little-to-none of the kinetic energy seen in clips of the show itself. 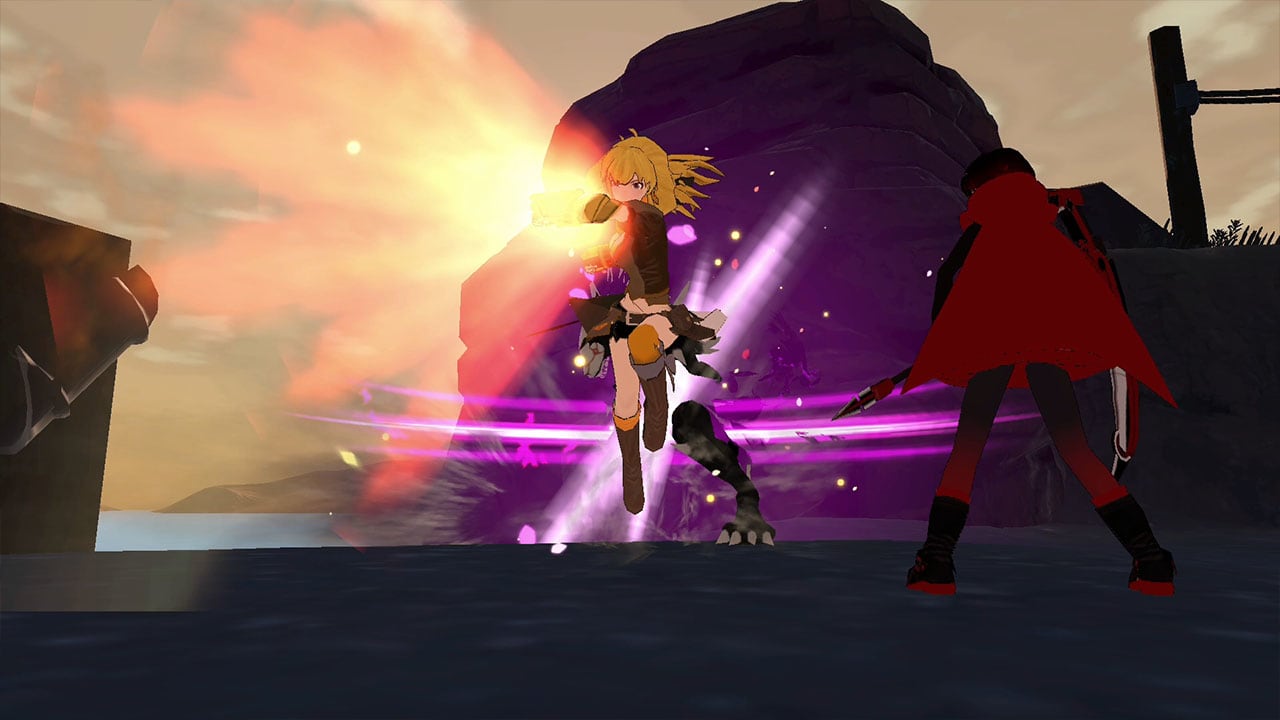 Yet Grimm Eclipse also feels like a very content-light experience, even with the added modes featured in the Definitive Edition. The campaign is very short, and although one can reset their skill points in order to scale better with their compatriots, there seems to be little reason to play through these missions more than once. Some of the skill point investments can result in a slightly varied build for a character, true, but it is rare that you’ll want to build a character for a specific mode of the game. I won’t mince words: playing Grimm Eclipse solo is a miserable experience. The game is very clearly balanced for cooperative play and becomes more visually engaging with more ridiculous effects on-screen. Finding or creating a lobby in order to play some of the game modes can be difficult, however, and I don’t know if that speaks to the amount of RWBY fans in existence, or the game’s low population on the Nintendo Switch.

If you yourself, or a number of your friends are RWBY fans, I can see taking this game for a spin once it has been discounted, as it offers up a slim, yet stylish amount of fun for a brief period of time. If you are looking to get into RWBY, I would strongly recommend watching the series instead of picking up this game. If you want a more satisfying gameplay loop than what Grimm Eclipse offers, I would recommend a number of co-operative experiences that can be found on the Switch that offer long-term and overall more satisfying rewards for the time you’ll invest. I really don’t think I can offer much more of a reason to play this game outside of what I’ve previously mentioned, which is a shame. But then again, what more can you expect from an independently-developed fan-game turned-official product based on a niche, American anime property?