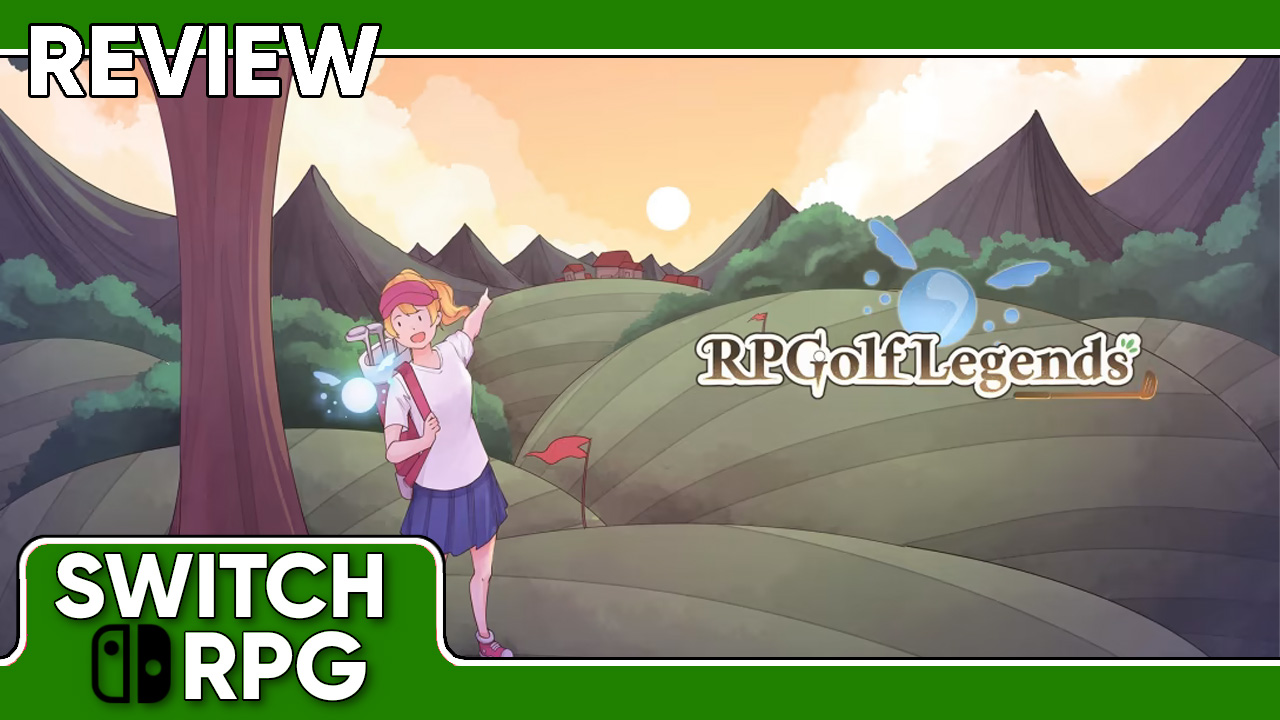 One of the most beautiful oddities of being an RPG fan is the myriad of genre crossover titles that pop up and wow us with their unique take on otherwise mundane concepts. Some of these crossovers turn into genres of their own, while others are tried once before fading into obscurity. A select few, however, carve out a nice niche for themselves, disappearing from the public consciousness for a few years at a time before resurfacing with some new take on the genre from some new developer.

Perhaps my personal favorite of these RPG crossover experiences is the golf RPG.

For whatever reason, RPGs and golf seem to go together like putters and the green, like drivers and the tee, like sand wedges in a trap (the list goes on). Golf games in general have a laid back, deliberate gameplay pace that fits nicely into the RPG mold, with clearly defined stats to customize. The mixture just works.

So when I heard that KEMCO would be publishing RPGolf Legends, developed by Artic Games, to the Nintendo Switch, I knew I had to get my hands on it. The only question is whether or not the game would be a hole-in-one or find itself stuck in a bunker somewhere. 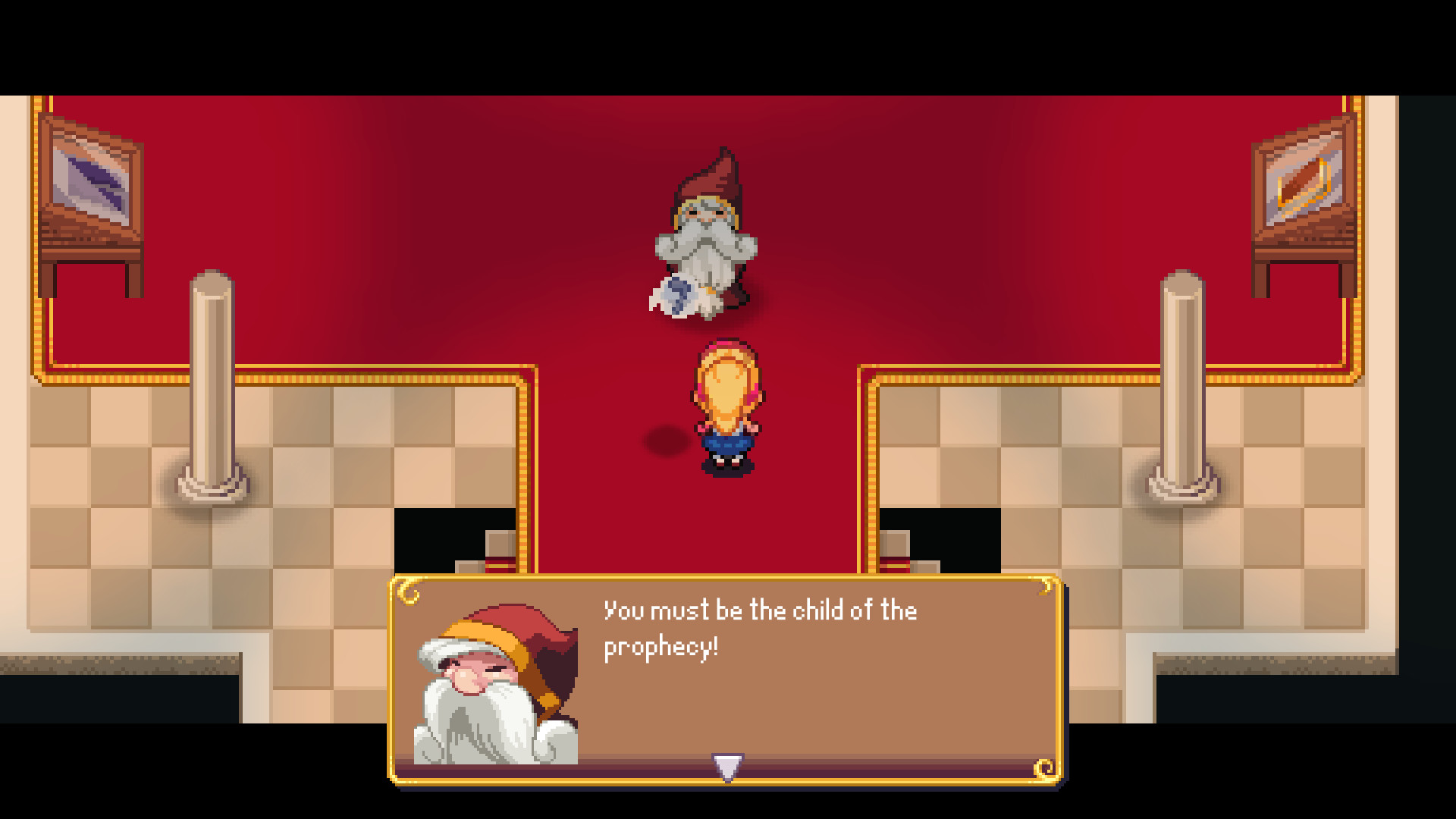 Like all true RPGs, RPGolf Legends has a story at its center that drives the gameplay. In a world where golf is one of the most beloved sports, an evil force has sealed all the planet’s golf courses behind magical barriers. With their precious courses inaccessible, the population has moved on, their golf supply shops falling into disarray, and their time filled by other, less magnificent pursuits. Fishing, in particular, has captured the attention of many former golfers, and has become one of the most popular pastimes in this age of golf-less darkness.

And so it is that one day, a golf enthusiast turned fisher manages to reel in the biggest haul of her life, the winged spirit of a golf club. Blessed with its own magical energy, this spirit promises that he has the power to break the seals locking away the golf courses of the world, and the pair set out on a quest to do just that.

From this silly premise the story unfolds, with all the charm you’d expect. The protagonist of the story moves from town to town, unlocking their precious golf courses and being heralded as a mighty hero in return. In response, our hero will typically just reiterate that all they really want is to play some golf, not save the world. This comedic juxtaposition between the hero’s motivations and the impact her quest has continues throughout the story, as do other light hearted storytelling elements, including some comical fourth-wall breaking on the side. It makes for a light, if charming, tale. 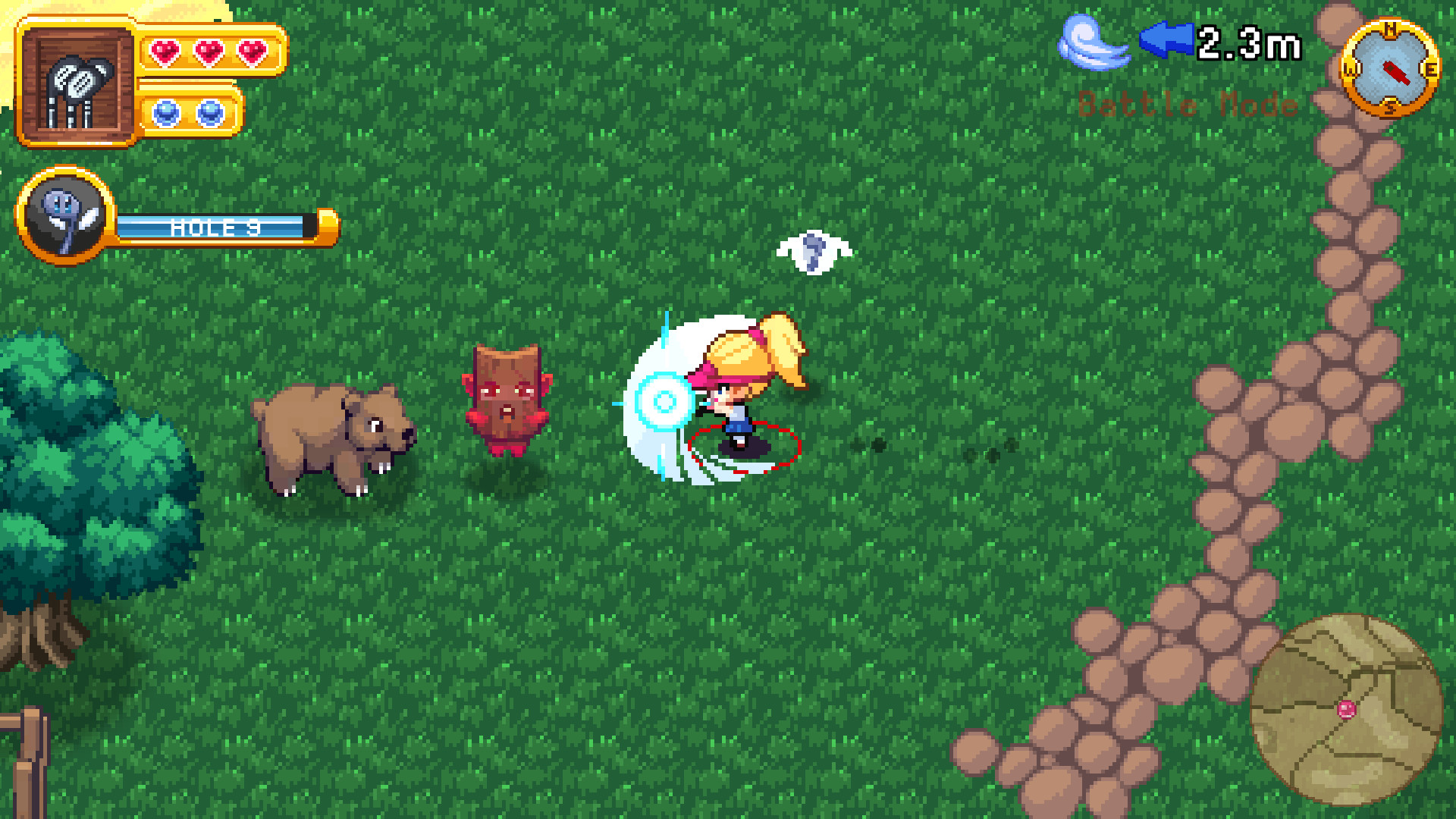 But what challenges must our hero face in order to do her good deeds? And what exactly makes this an “RPGolf” game, rather than just a Golf game? To put it simply, the core game mechanics seem to be stripped straight from classic action / adventure RPGs, most notably the Legend of the Zelda: A Link to the Past. Our hero can run around the overworld fighting monsters, collecting gold and loot drops, discover dungeons, buy items, and face off against powerful bosses.

All these overworld activities take place around (and sometimes directly on) the golf courses you are setting out to unlock, which can make the early exploration of a new area a bit cumbersome, as you navigate around looking for floating crystals that will let you unlock courses, which must be unlocked in order. However, I found that even with all the barriers stripped away, the topography isn’t particularly easy to navigate by memory, and the in-game map lacks geographic detail, opting instead only to show you where courses and lakes are – rather than trees, caves, buildings, and other landmarks that might help you draw a mental map of the area.

Exploration aside, combat and character progression in the game can be a bit limited as well. For the first half of the game, you’ll have only a single swing of your golf club and a little charge attack at your disposal. Enemies will bounce away and charge back in using simple attack patterns, some inflicting status effects like poison or confusion to make your life a bit more miserable. There are no spells or abilities to speak up, and equipment is fairly limited for much of the game, with just a few pieces that improve minor stats or prevent status effects. Healing items – all healing items – also run a timer, so if you get into a sticky situation, you may find yourself running away to avoid a respawn.

The game’s most notable feature, it’s class system, ultimately comes out to be a bit of a dud. The first class you unlock provides a slightly better charge attack and a transversal bonus that sounds appealing at first, but the game then immediately sends you off to an area where this new capability is meaningless. Another class upgrades your standard attack swing into a three hit combo, but you quickly discover that the powerup is almost entirely useless, as enemies will still bounce away and enter invincibility frames as soon as one of your swings connects. All these elements come together to make the RPG side of the fence a shallow experience, which is a shame, given how exciting the pitch made in the trailer seemed to be. 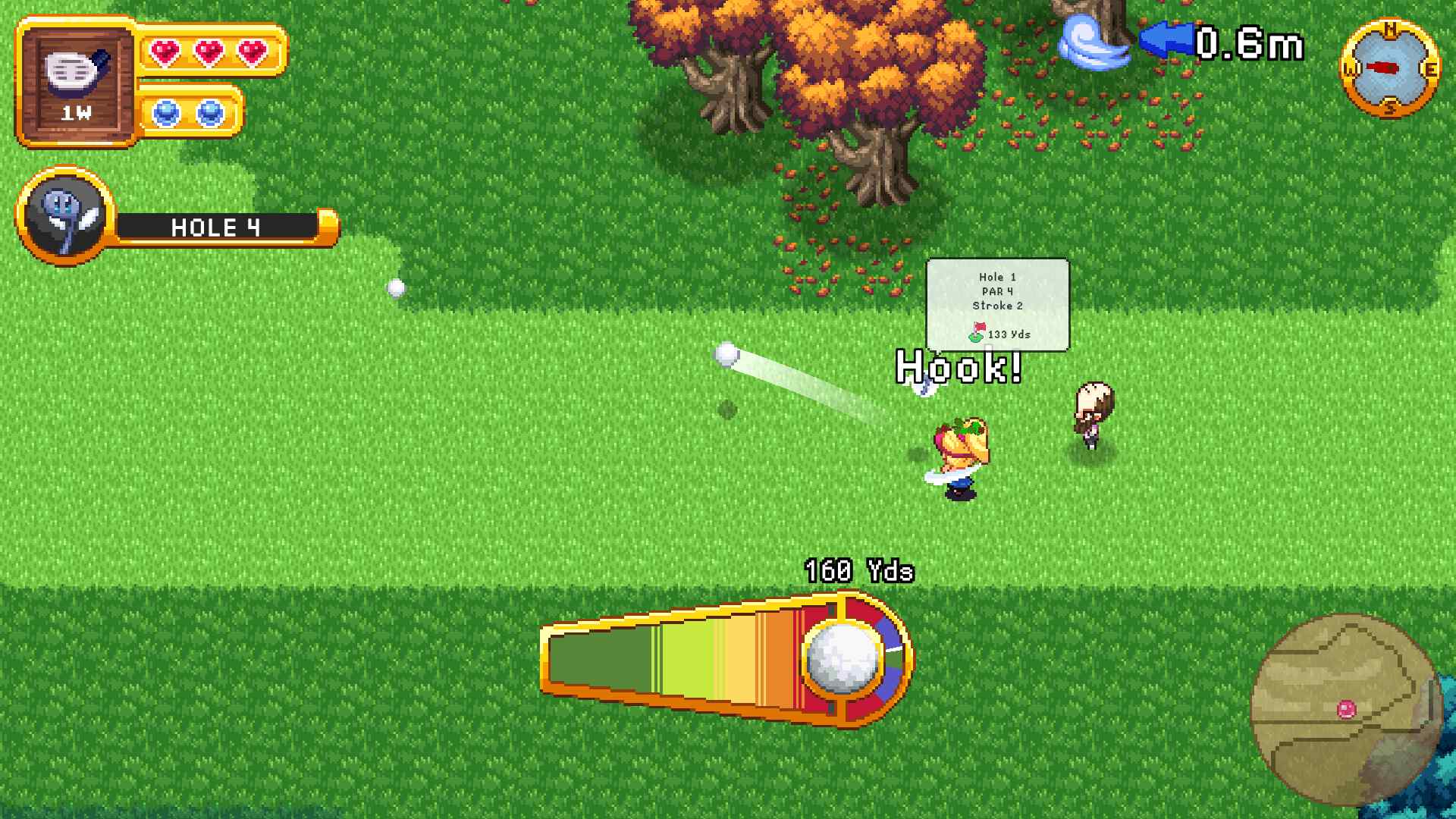 Okay, okay, you say, but what about the GOLF? This is a golf game, right? Surely that’s the real attraction here.

RPGolf Legends certainly has a solid golf game built into it, with many of the staples you’d expect from the genre. Timed button presses are the name of the game here, as you will find yourself setting the power and accuracy of your shot. You can intentionally hook or slice the ball by landing your accuracy press a little off target, and use the power gauge to position the ball to your liking. Courses have familiar terrain features like the fairway, rough, bunkers, and the green, as well as special features found in different biomes, like snow, ice, swamp, etc.

Some of these more weather oriented features – like wind and rain – function as you would expect them to. If the wind’s going your way, you’ll find better positioning. If not, prepare for a bogey. The real trouble comes from features that are less balanced, ice in particular being infuriating to play on, as your ball zips out of bounds with little to no starting momentum. Blessedly, the game gives you some special equipment and items to help along the way. Class-specific club sets can help you better play in different types of terrain (like allowing your ball to land in water), while special balls will change how your shots interact with terrain. Sticky balls, for instance, help a lot with those extra slick areas.

What the game lacks, however, is the same level of depth found in its competitors. Verticality hardly ever comes into play, and the game is missing certain spins you can put on a ball to impact its bounciness. In addition, putting is extremely simplistic. Every green is entirely flat, meaning it’s a straight shot every time you put. You have only to worry about weather effects like rain (and of course getting on the green in the first place) and outside of that, you’re golden. This isn’t to say the golf mechanics aren’t fun – they are – they just don’t reach the same highs found in certain other golf games available for the Nintendo Switch. 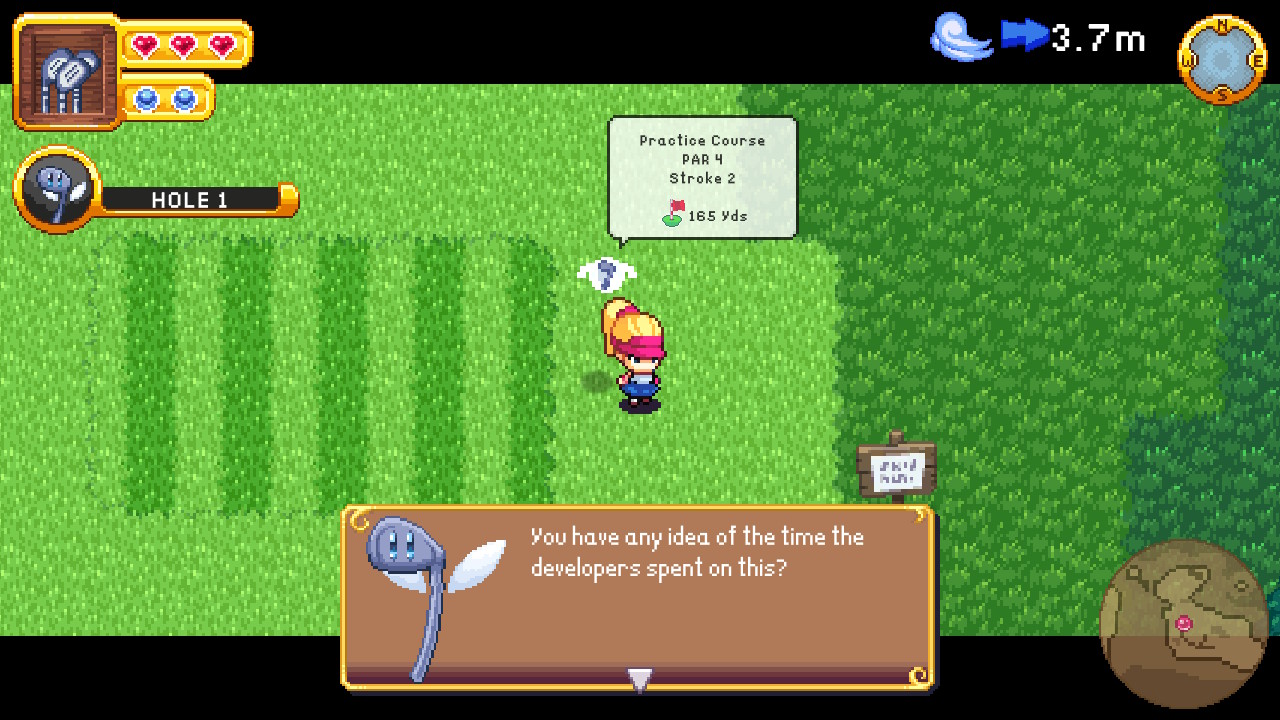 Aesthetically, the game does feel well polished, with vibrant spritework and a solid soundtrack, and while the RPG and golf mechanics are thinner than I would like, there is a core engine here with a lot of promise. The trouble continues, however, when you look at some of the other elements surrounding this engine.

The gameplay loop of RPGolf Legends is perhaps it’s weakest quality. The progression of the game generally sees the player moving to a new town, being assaulted with a myriad of sidequests that typically amount to little more than busywork, and then heading off into the surrounding area to complete quests and unlock courses. A fair amount of grinding comes into play here, as you will either need to kill monster x, or collect item y, or gather z amount of energy to meet these goals. The energy required to unlock new courses can come from killing monsters or playing rounds of golf – so the game at least gives you some choice here – but I doubt anyone had “grind the same course over and over for energy” on their wish list for a golf RPG.

A myriad of other little grievances influence my perception of the game as well. As mentioned before, the in-game map is not helpful at all for navigation. What it does have is a fast travel feature, which is appreciated – until you realize that it inexplicably comes with a cooldown timer. Other gripes include the rarity of certain item drops, the locking of truly fun special abilities to rare equipment in the late game, and the slow rollout of the class system, which takes about three full towns to finally get up and running. There’s also some backtracking that comes into play during the back half of the game, which again just seems like a gamer-unfriendly way of padding the runtime.

RPGolf Legends is a game with a lot of potential, but some missteps in execution leave it lagging behind its competitors. If you are a fan of golf RPGs (or golf games in general), you will certainly find some enjoyment here, but look at better reviewed titles first before sinking your teeth in. Ultimately, this game struggles to make it up to par.