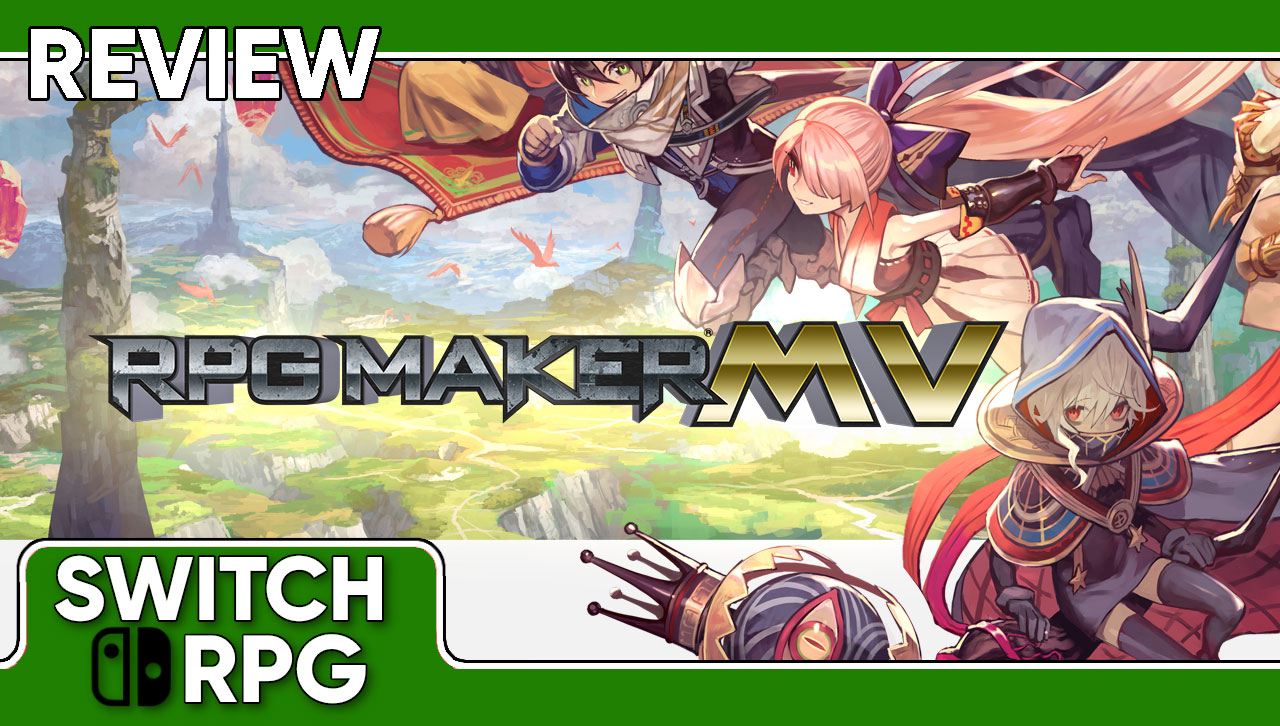 The Switch has finally received the eighth version of the RPG Maker series, MV, which will hopefully herald a new era in amateur- and indie-RPG development. This is only the second time the classic series has been ported to English-speaking Nintendo fans, and the anticipation for it is heavy.

Unfamiliar with the series? It’s not a game; it’s a game maker. A complete system for designing, writing, publishing, and playing sprite-based, Japanese-style RPGs. The first iteration arrived back in 1992, but its coding had already provided the framework for Japanese RPGs on PCs as far back as 1988. Indeed, it has a long and varied history, and has also undergone many improvements. The series’ property changed owners (ASCII to Enterbrain to Kadokawa) and English localizers and publishers (Degica to NIS America) to arrive where it is today, fine-tuned, and ready for a new generation of aspiring creators.

So if you’ve ever wanted to make your own roleplaying adventure for friends, or played other “maker” games like Super Mario Maker or even Minecraft, and wanted to try a different game-making format, this is absolutely the best and full-featured tool out there!

This is important, so it bears repeating: RPG Maker MV is NOT a game. It can access RPG Maker MV games already submitted by users, which can be played via download, but its primary value is in letting the player create a game. Choose a project name and title, pick a save block, and instantly be given access to a vast array of pre-built tilesets and a brilliant, easy-to-use sprite maker. 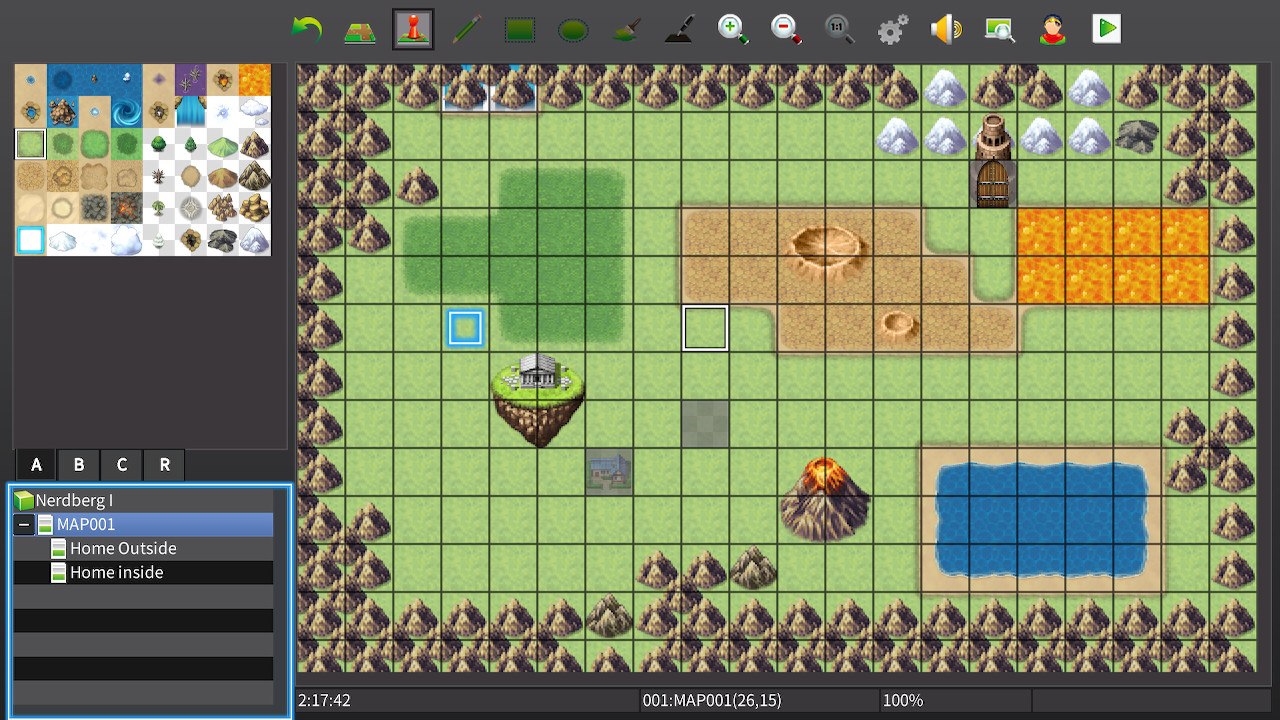 The main edit screen features the map editor, with three windows and a toolbar. One window is the Map List, a cascading list of the project’s maps, to easily select between each level of your vast and growing world. Then there is Tile Palette window for the currently selected tileset, which provides all the game’s assets like trees, mountains, paths, beds, even toilets! Finally, the main window, Map View, is the active map, ready for placement of the chosen assets and to be manipulated for events.

The tool bar on top provides a huge range of additional features. For example, it opens up the Database, the Event Editor, the music manager called “Sound Test,” and the very engaging Character Creator, all of which require their own windows and dialogue boxes. The menu system is fairly straightforward, but navigating it takes some patience and practice. The depth of functionality that is layered in those menus can be overwhelming, but once you understand and familiarize yourself with the workflow, you will find there is so much that you can create and do. 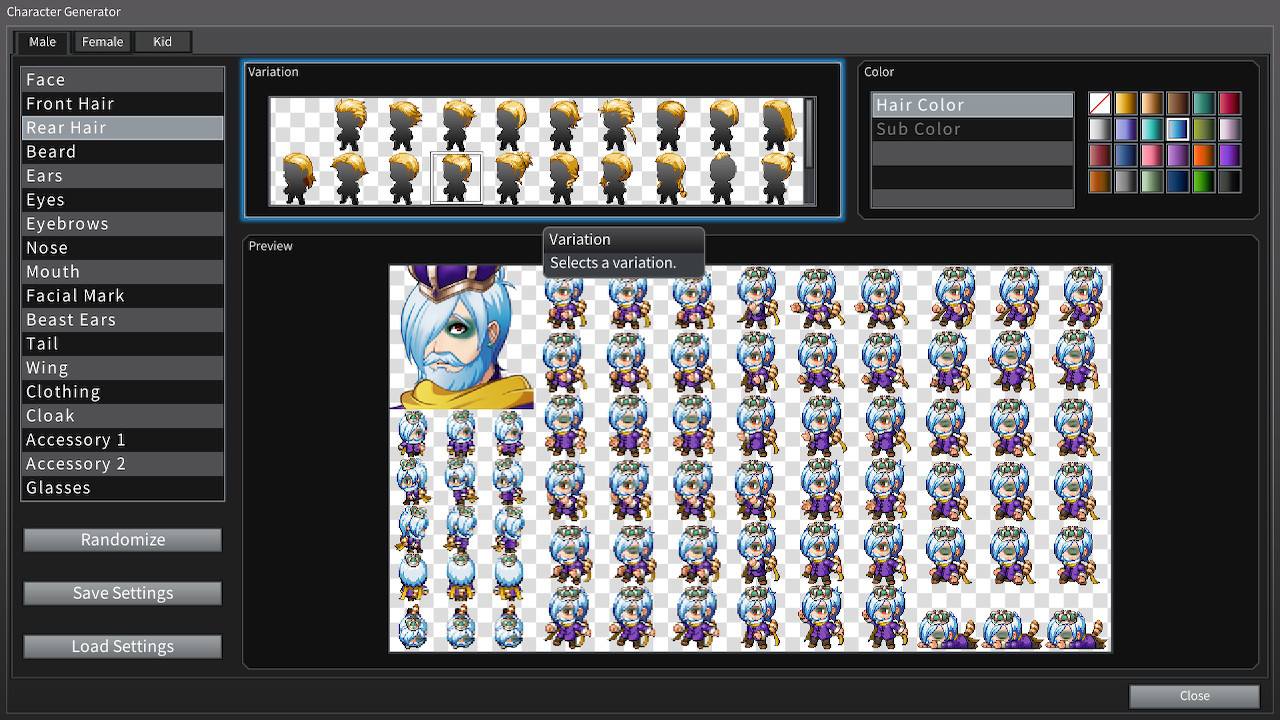 Just to place an NPC on the map, for example, requires an “event” to be created, which is much more involved than you would think.

You begin your journey with a black screen and mother calling out, “Wake up! Wake up!” Classic!

…Wait, this isn’t supposed to be a game. What’s going on?

Oh. I see—a lengthy tutorial…in RPG-form. Well, it can’t be too bad. Two naps and half a pizza later, I give up and shut off the tutorial. I’ve waited long enough! I want to start creating stuff! 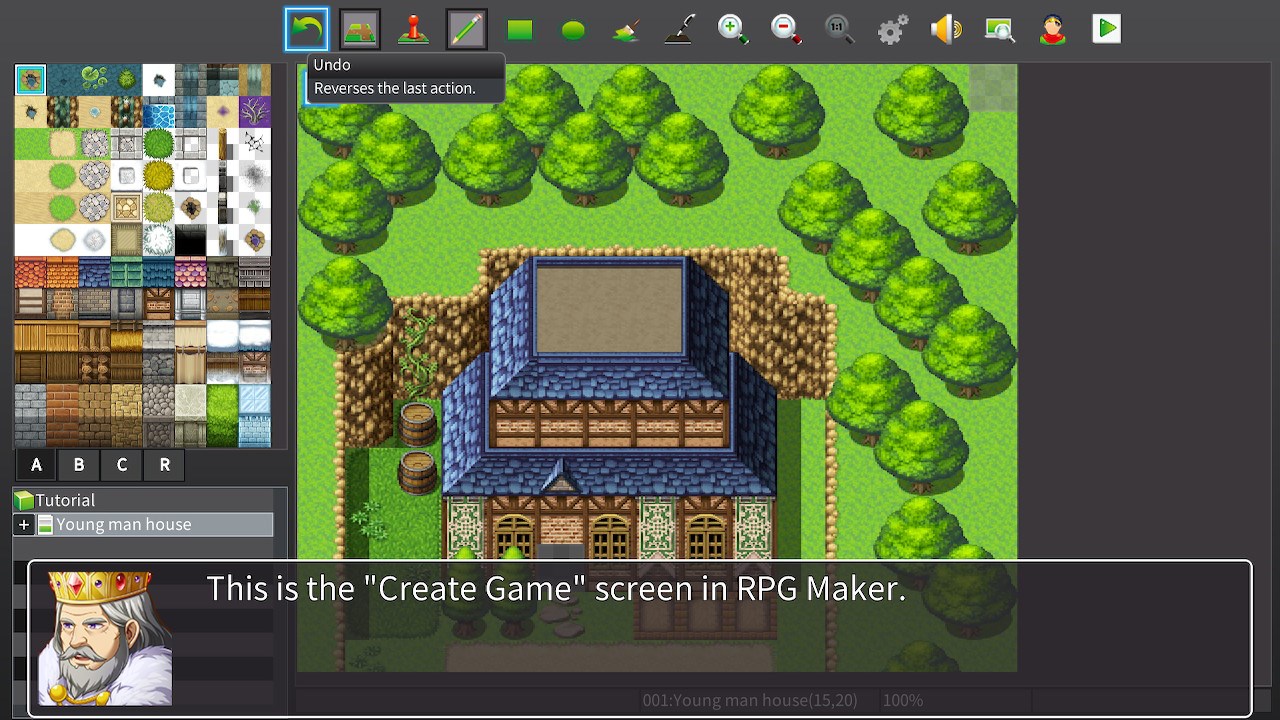 A final note about the tutorial: if you don’t save it properly— and I didn’t— you will lose all progress and have to begin again. And beginning again is nigh impossible. There really is no easy way to find the tutorial again if you did not finish it.

With no base game or main campaign (other than the tutorial), the story in MV will be whatever the community creates. You literally start with a blank slate. Every game submitted by users can be filtered with tags and ratings, ideally keeping the naughty ones and pranky ones at the bottom of the list and letting the Switch community choose which should rise to the top. This is important because EVERY submission is available on the Maker Forum! It will be interesting to see how quickly this fills up, and which projects draw the most downloads.

A very real concern is how to enjoy these original games for players who can’t afford MV, or who have no intention of using it to create games. In other words, is there a way to just play the games without owning MV? Yes! Enter the RPG Maker MV Player. This is a FREE digital download that provides all necessary software to run one of the games in the Maker Forum. NIS America released a similar app for the 3DS with the FES release, but the version for the Switch is much more user-friendly. The purpose of the Player is to make the myriad user-generated content readily available to the entire world. If one of the games a player wants to try out required a DLC in its creations, the RPG Maker MV Player automatically provides the assets without the need for a purchase. 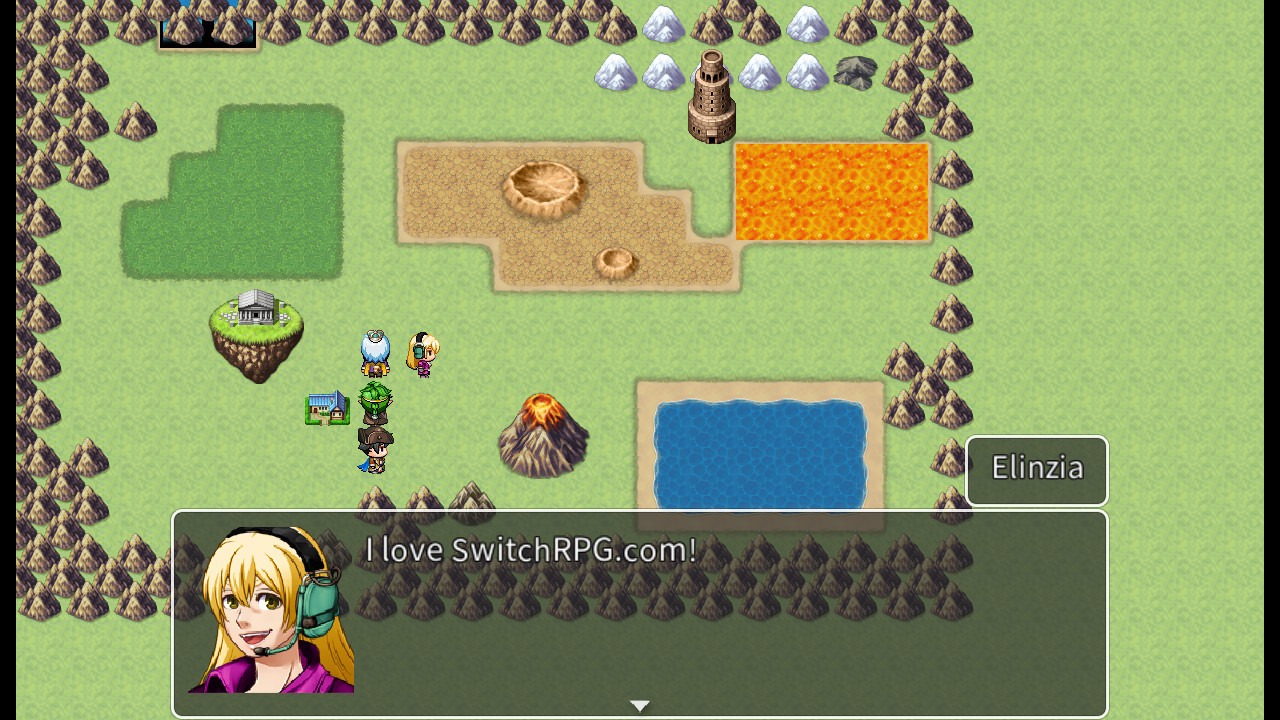 Some might call the graphics featured in this maker “retro,” but that’s complicated label. The style for all the base assets is classic JRPG top-down tiling. But, since this particular style existed in the 8-bit era (ie. the original Final Fantasy or Dragon Warrior I-III), was brought greater attention in the 16-bit SNES era (like Chrono Trigger and Breath of Fire), and then all but disappeared with the N64 and GameCube, it’s easy to misinterpret how advanced the newer sprite-based games are. For MV, the default sprite generator is actually 32-bit, as it provides unlimited colors and alpha-blending. The tilesets are pixel-based with the same array of color options. But both can be “hand-drawn,” or fine-tuned via direct manipulation to appear more like their retro 8- and 16-bit ancestors.

In contrast, splash art, enemy art, and character “face” art may include higher quality pixel-based images, like JPEGs. Used in tandem with the sprites, the more detailed images will make your game look cutting edge. Or, at very least, something more in line with JRPGs in the last decade. The choice is up to the creator. That is, RPG Maker MV is a choose-your-own-aesthetic. 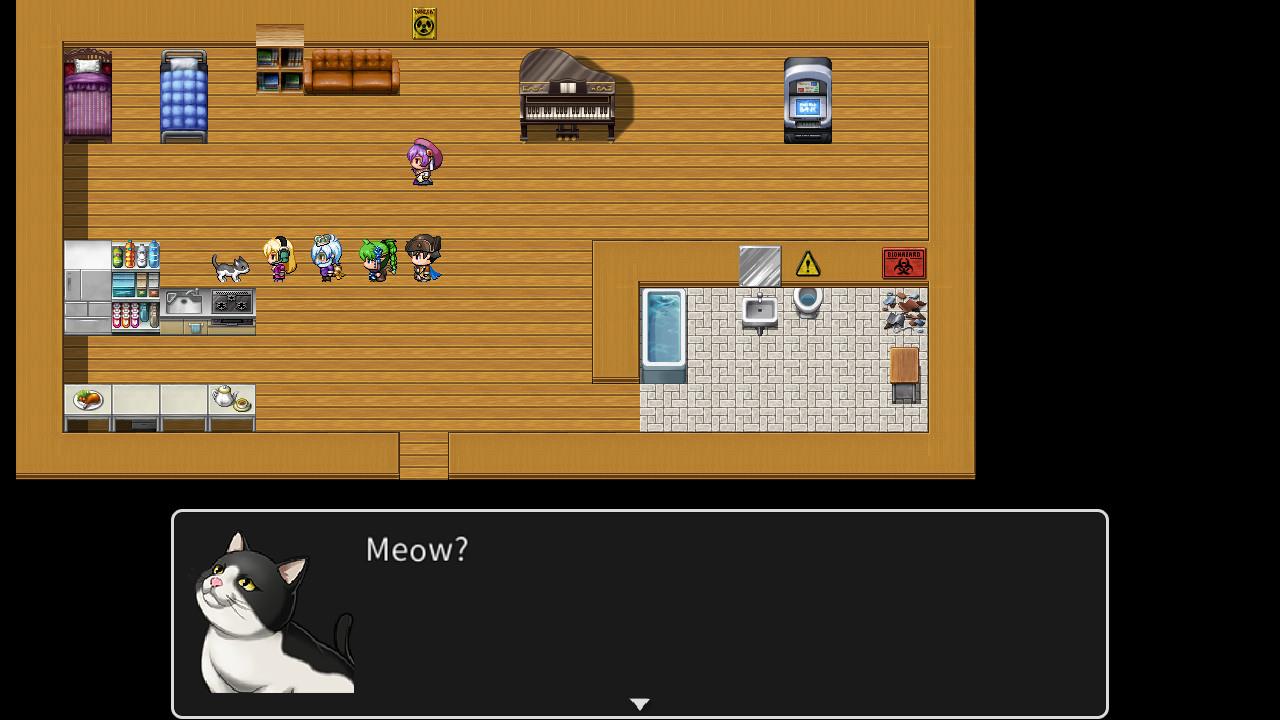 Note that despite the amount of assets available (twice as much as the PC release!), there is, unfortunately, no way to import a JPEG or homemade tileset. Everything has to be created within the framework of MV using the tools the developers provide. So, no using images of your favorite waifu, or “borrowing” tilesets from Deviantart- it’s all gotta be original, or as original as the MV tools and your imagination will allow. This drawback is actually a blessing as the creation process seems to be a long, patient, rather overwhelming journey, and I find that anything that narrows the list of resources I can use helps me zero in on my goals.

There will be additional assets available in DLCs to be released and made purchasable via the in-game Store. If prior versions of the series are any indication, a slew of music and higher-quality, unique-setting assets will cost quite a bit ($2.99 – $29.99US). But thankfully, NIS America has promised several will be available for free!

For creative gamers out there who have always wanted to make their own RPG, this game/program is perfect. The functionality and depth which it allows you to have can really inspire makers to unleash their imagination- if they have the patience to do so. Being able to instantly run a playtest whenever you want to check on how things are working is not only helpful but motivating in making you want to keep working out bugs and constantly improving story and layouts. 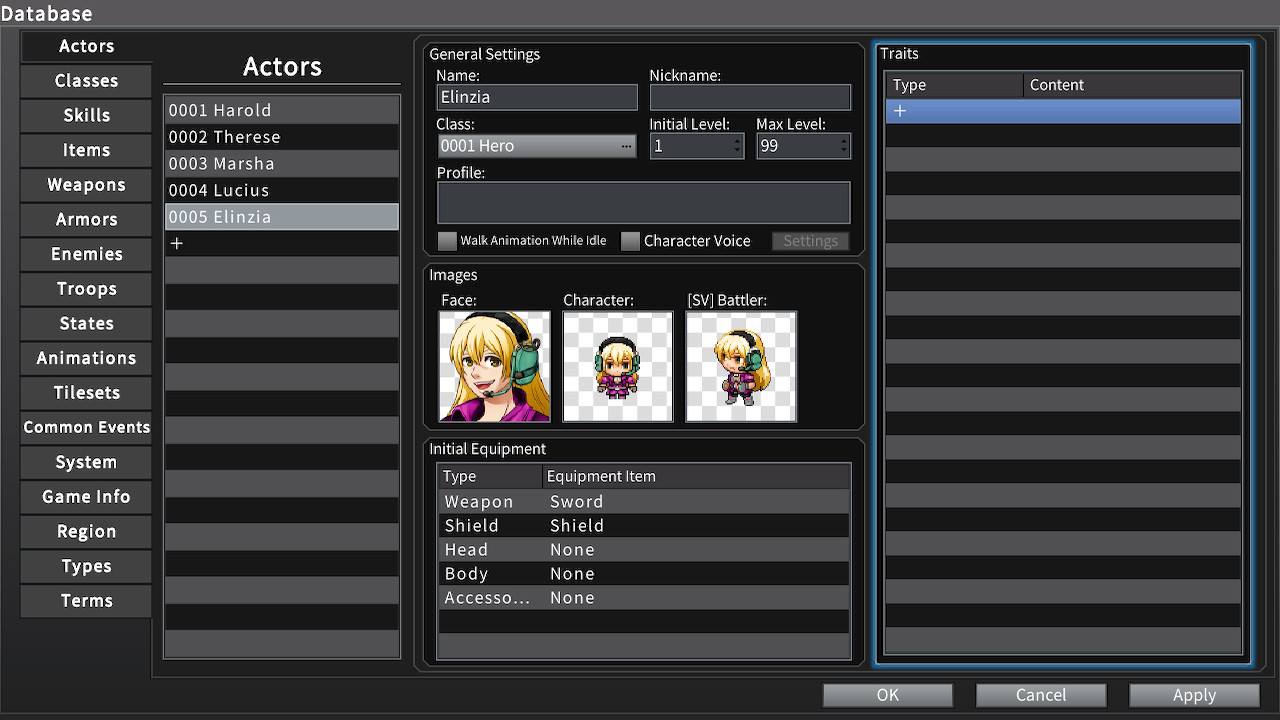 The biggest strength of RPG Maker MV is also it’s greatest flaw: it is incredibly complex. This is not a game that a child could easily pick up and play around with, such as Mario Maker. One has to have good reasoning skills and an incredible amount of patience to make a worthwhile game. Also, the tutorial really is a necessity here as there is so much to work with and little to no guidance post-tutorial. If, however, you are genuinely wanting attempt to make your very own fantastic RPG… this is a must buy.

While experimenting with RPG Maker MV, I made a very short “game” to test out the different functionalities and mechanics you can work with (which is also what the above screenshots are taken from). If you would like to see this game, search for “Nerdberg I” in either RPG Maker MV’s Maker Forum or in the RPG Maker MV Player. Just don’t be expect my little game to be the next Chrono Trigger.