Rogue Legacy – a roguelite platforming RPG from Cellar Door Games – is all about the time-honored tradition of following in your family’s footsteps. While this can equate to many things in the real world, here, it ultimately means that you and your ancestors are to, for sure, die horrible deaths. Though this family business may not be great for the unfortunate ones involved, it the foundation of beautiful game design that has captured my heart recently, and may do the same for you. Despite being conceived almost seven years ago, it rates among the best roguelites I’ve ever played. 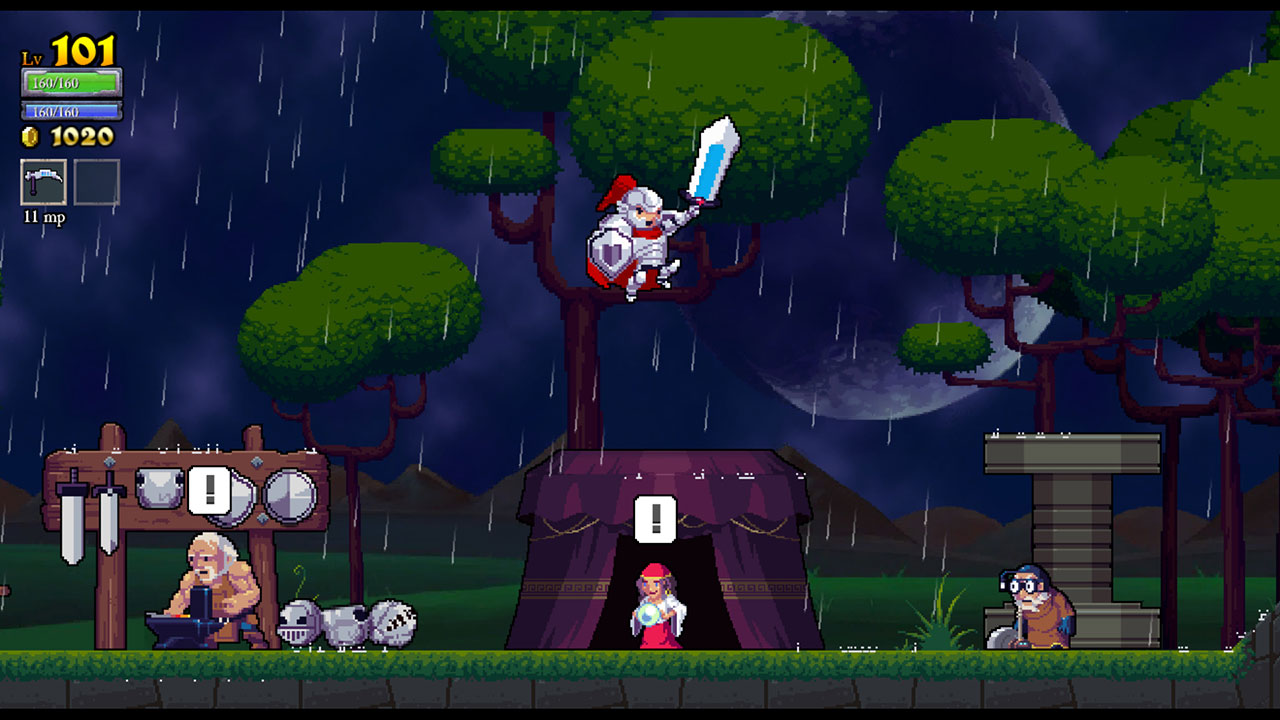 The King has been mortally wounded by an assassin. His only hope for survival lies in a reagent said to reside within the castle of Hamson – a haunted castle within a cursed forest, home to unspeakable horrors. The King has tasked his children with finding this resource before it is too late, though unfortunately, these types of things rarely are a straightforward procedure. Will his offspring be able to retrieve this salve, or will they die horrible deaths?

Rogue Legacy is but one instance where being the eldest sibling is perhaps the worst thing ever. Castle Hamson is a deathtrap, and its only through trial and error that you’ll ultimately be victorious in your quest. While you will inevitably reach this fabled resource – unlocking answers to some mysteries in the process – it won’t be done until after many of your siblings have given their lives in the pursuit of the treasure. Though this means that many, many lives will be sacrificed for the cause, the goal is obtainable with determination and perseverance. 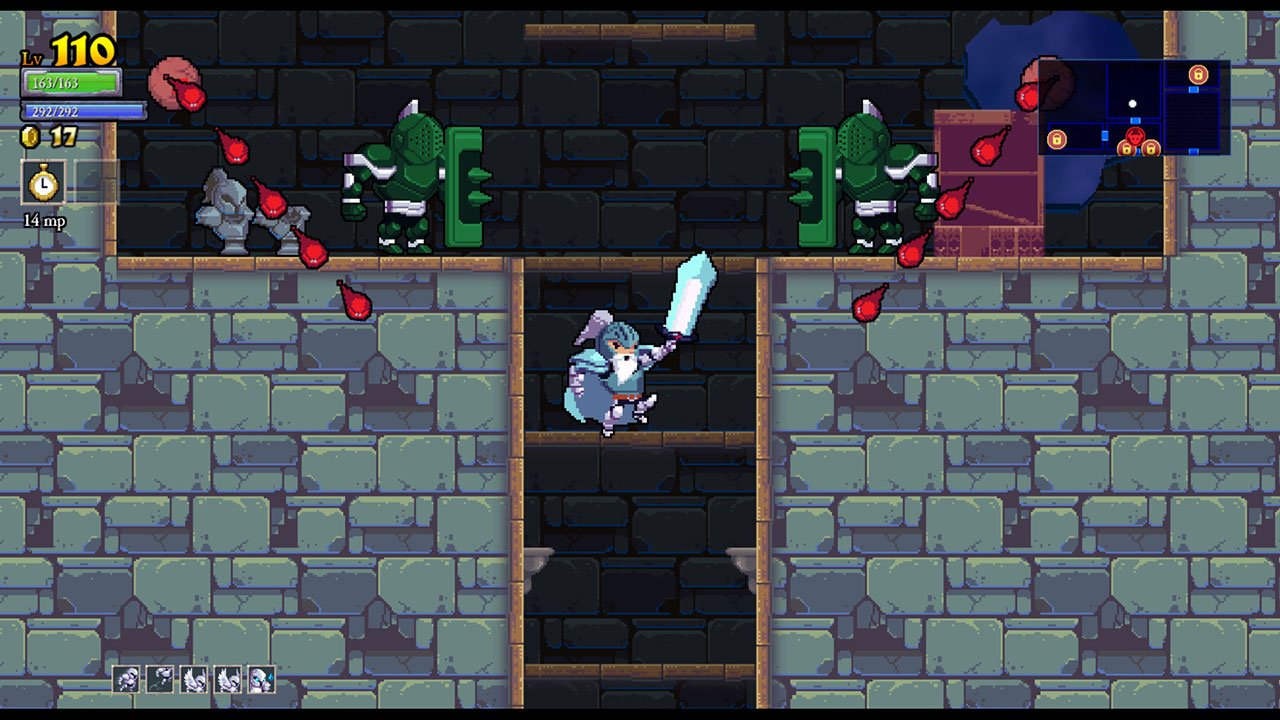 Rogue Legacy is a platforming roguelite RPG that plays similarly to many Metroidvanias: traverse a dense web of rooms, defeat bosses, and unlock the path to the King’s cure. Hack and slash your way through a myriad of monsters, all while making sure to break as many destructible objects along the way as possible – you never know what contents are within. Death is inevitable, but fortunately your descendants will always be ready to pick up the torch in your stead once you have met your demise. Gold accumulated between runs can then be used to purchase skills, equipment, and runes for use in subsequent runs.

You won’t be Scrooge McDucking the money for a while, however, as the gatekeeper at the beginning of each run will demand a certain portion of your gold to begin anew, meaning you cannot take much gold with you across multiple runs. Before any of that, at the beginning of each run, you must choose an heir to play as from a random selection of three applicants. Heirs vary in ability, class, and even size, making even the hero themselves a somewhat random element of this roguelite adventure. There are a number of classes an heir can be – from the balanced Paladin to the more aggressive Assassin, each of which have distinct advantages and disadvantages in practice.

Furthermore, heirs will often feature hereditary traits that can dramatically alter play. There are roughly 40 in total, and like the various classes, these can have their own sets of pros and cons depending on the situation. While the dwarfism trait means that you are physically smaller – along with your offensive strikes – it also allows you to traverse small passages which would otherwise be impossible for someone with an average build. 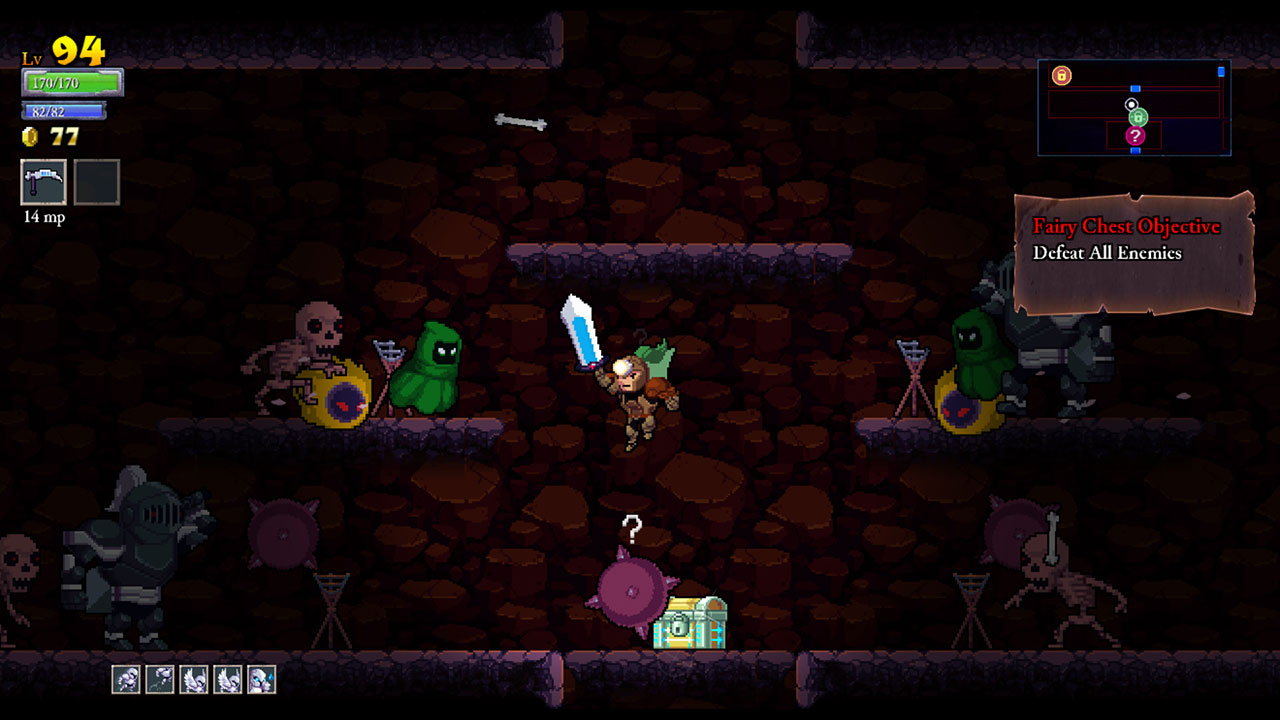 Then there’s Alektorophobia, the fear of chickens, which makes chickens randomly spawn after breaking objects and chase you, though you can avoid them in order to be able to come back later and harvest their meat when you really need sustenance. Not all traits have benefits though, like the truly unfortunate Vertigo that turns everything upside down, while others add little more than a bit of flavor to the experience, such as the censored swear word barrage of the Coprolalia. Admittedly, some of the afflictions are quite serious in the real world, so a level of disconnect from that reality is required to tolerate these traits.

My thought is that the developers included these as a legitimate way adding both layers and flavor to the overall experience, rather than legitimately poking fun at something – I’ll leave that for you to decide on your own, though. Either way, I feel that these various traits add a meaningful dimension to the gameplay loop. The pool of possible traits and classes, boiled down to three picks per run, means that you must be willing to adapt to any potential strength and weakness of the chosen heir.

Roguelite features in Rogue Legacy come in the form of the skill tree, equipment, runes, and boss progress. The skill tree is where most of your money will be invested, as it not only increases the power level of the current and future heirs, it also unlocks new classes, increases gold gained, and improves your haggling ability with the gatekeeper when it comes to their gold demands. The lesser of the goldsinks comes from equipment and runes. This gear can be swapped in and out from outside of the castle on any heir once unlocked, though the game’s weight stat can limit the density of your loadout if you haven’t invested in its respective tier in the skill tree. 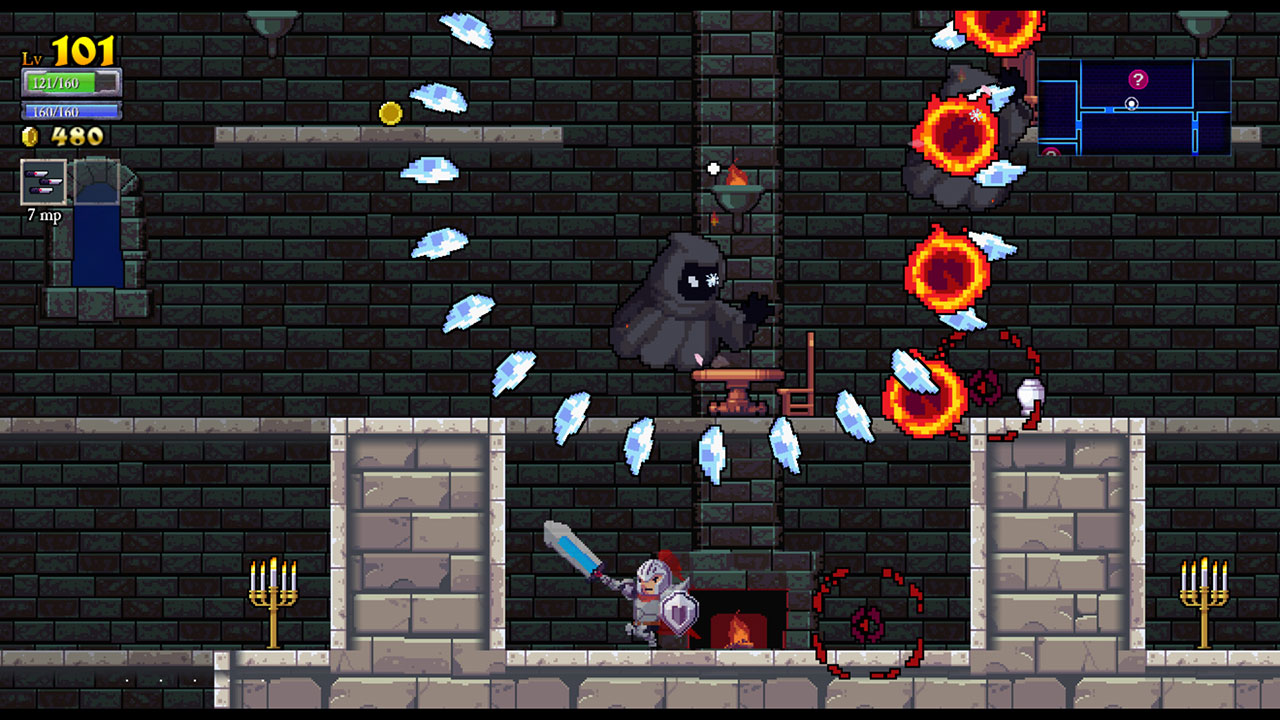 In theory, more powerful equipment comes at the expense of more weight, but it can be advantageous to revert to older gear depending on the heir, their traits, class, and the loadout as a whole. The end result is constant min-maxing the player can do to best compliment their current heir, rather than “setting and forgetting” with the best gear possible. Runes, on the other hand, are not limited by the weight factor, but can only be inscribed on a single piece of gear at a time – in other words, one active rune per gear slot. Like gear, runes vary in boons, from granting flight, faster movement, to siphoning the life force of your enemies. These also remained permanently unlocked once purchased.

The final and – to me – least interesting way to spend money is through locking down dungeons. If you really liked the layout of a particular dungeon, you can give the Architect 40% of your next run’s funds to lock it down in order to have an easier go at certain objectives. While there are some advantages to do this, the fact is that gold remains invaluable throughout the entirety of play, and a 40% cut is awfully steep when you’re trying to grind out for the next upgrades. Even if you choose not to hire the Architect, some castle progress will remain consistent throughout multiple runs. You can only beat each boss once, so they are permanently defeated regardless of how many heirs are played between their defeat. 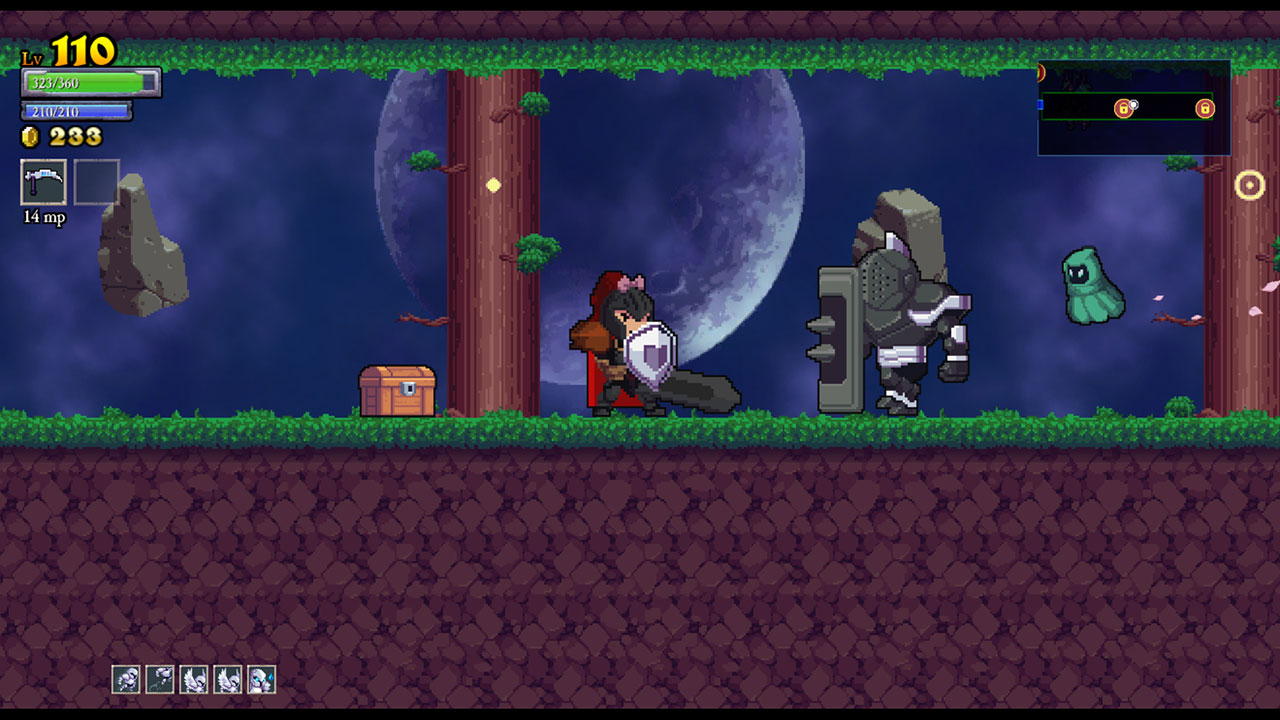 The silly nature found within many of the systems in Rogue Legacy also permeates its aesthetic, with distinct, colorful characters and varied locations to explore. The heirs themselves are, by far, the best aspect, as each holds their sword out triumphantly as they march towards their inevitable deaths. Heirs always look unique thanks to gear, class, and trait differences – one run you might roleplay as a flatulence-filled Lich, while the next may have you in the boots of a mage the size of Andre the Giant. Rogue Legacy rarely takes itself seriously, as can clearly be seen throughout its mechanics and cosmetics.

That said, the game does fall short in some graphical areas. While enemies themselves do increase in complexity as you go, many are mere palette-swaps of the same enemies you’ve faced many moons over. Even some of the bosses are just enormously large versions of the same enemies, albeit with different abilities. Additionally, it won’t take long for you to notice similar rooms across runs, even though certain aspects of them will ultimately be different (like item placement and enemy layout). Though its obvious that budget/time restraints made parts of the aesthetics uninteresting, it more than makes up for it with its highly polished gameplay. 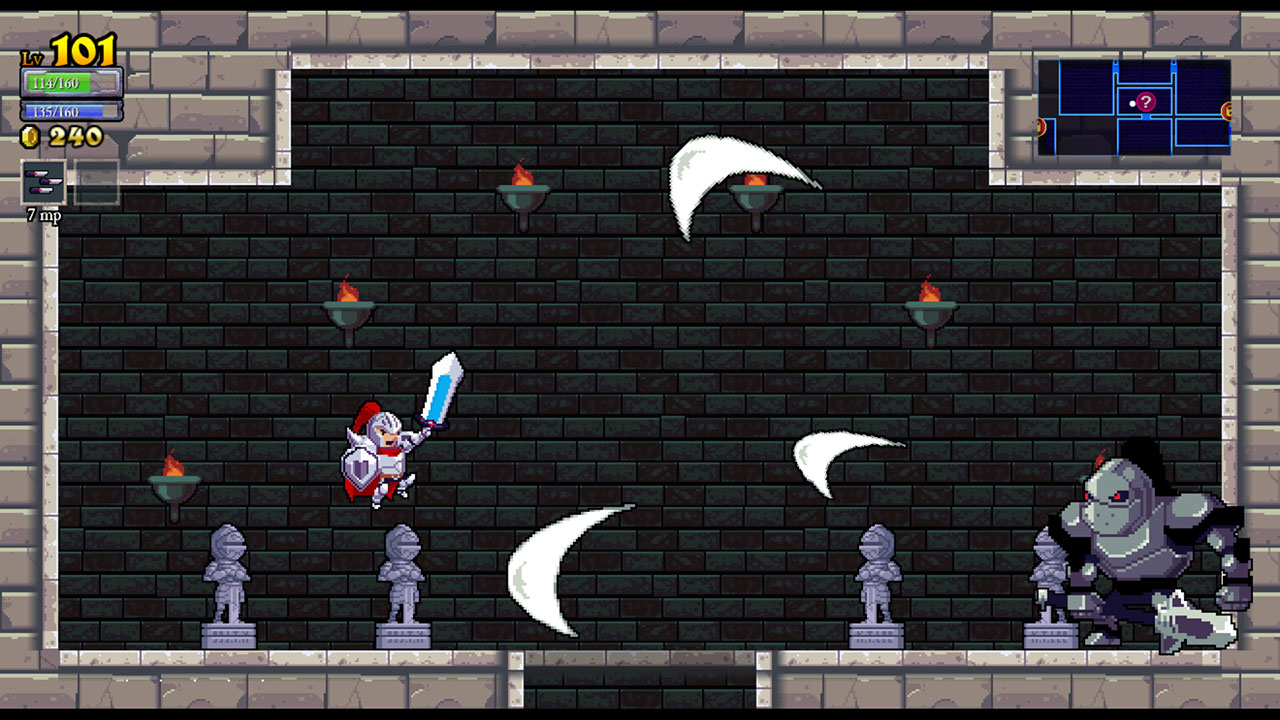 Rogue Legacy perfectly encapsulates what makes a roguelite so appealing: bone-crushing difficulty and a steady sense of progression across many, many runs. Though the randomization in relation to the individual rooms tends to come apart at the seams early on, it compensates for the well structured randomization elsewhere. The multitude will, to a point, continuously challenge and surprise you, despite their outer shells remaining rather consistent throughout the playthrough. Ultimately at this point, fans of the subgenre have had numerous opportunities to partake in Rogue Legacy – spanning multiple platforms over nearly a decade – but I strongly advise those that haven’t played, or didn’t give it a fair shake previously, to pick it up on Switch. You won’t be disappointed.