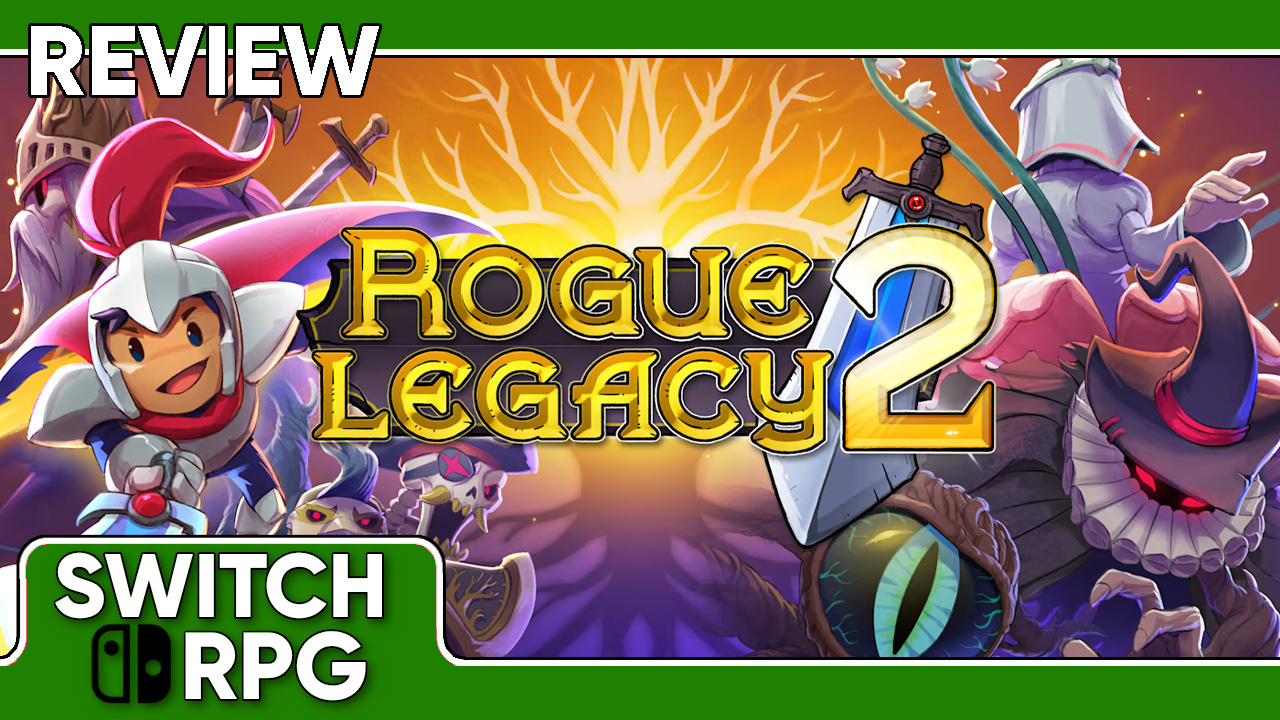 Someone once said that “you must learn from the mistakes of others because you’ll never live long enough to make them all yourself.” While this certainly applies to our own lives, it is even more important in the Rogue Legacy series. Billed as a genealogical roguelite, the first Rogue Legacy took the world by storm almost a decade ago before being released on the Switch back in 2018. I reviewed it a few years back and needless to say, I was also a big fan of it.

There’s something oddly satisfying about learning and growing from your past mistakes, treading on the bones of your heirs as you explore deeper into the depths of randomly generated dungeons to hopefully not succumb to the same things they once did. I obviously wasn’t alone in this since Cellar Door Games released a sequel back in April of 2022 before porting it to Switch a few months later. Although this new entry undoubtedly improves on just about every aspect of the original formula, there are some drawbacks to consider from the vast changes as well. 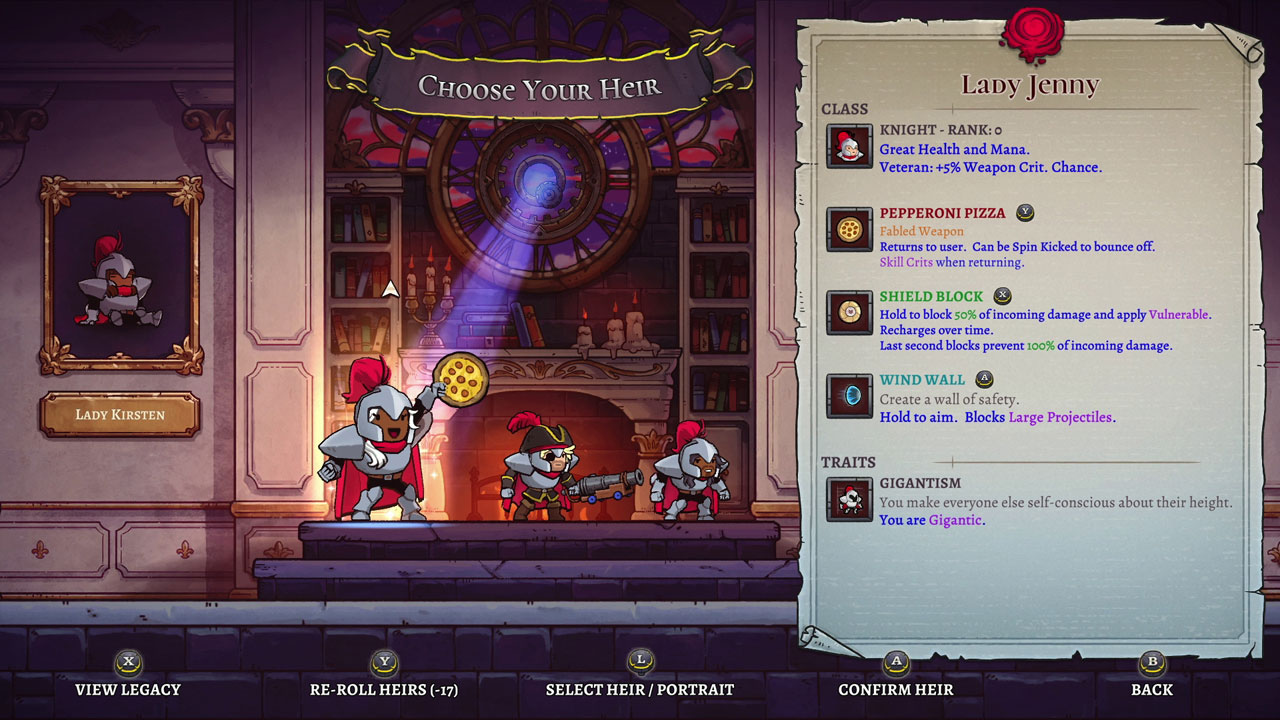 Rogue Legacy 2 is a Metroidvania roguelite where you probably won’t succeed. But with enough perseverance, one of your heirs eventually will. After the opening sequence, every run begins with you picking a new heir. While you can only select from three randomly generated heirs to begin with, eventually, you will unlock the ability to reroll them many times over each run.

The thing with heirs is that they aren’t always good – some are terrible – though you may be rewarded more handsomely if you choose one that has spawned with more debilitating traits (you get increased gold gains from picking the nastiest ones). Some heirs may just be colorblind, some may be complete pacifists that refuse to cause any harm, while others may have a case of gigantism (useful and a detriment all in one). Along with traits, heirs will also be assigned a class based on the ones you’ve unlocked (there are 15 total) as well as potentially coming with a relic (more on these later). 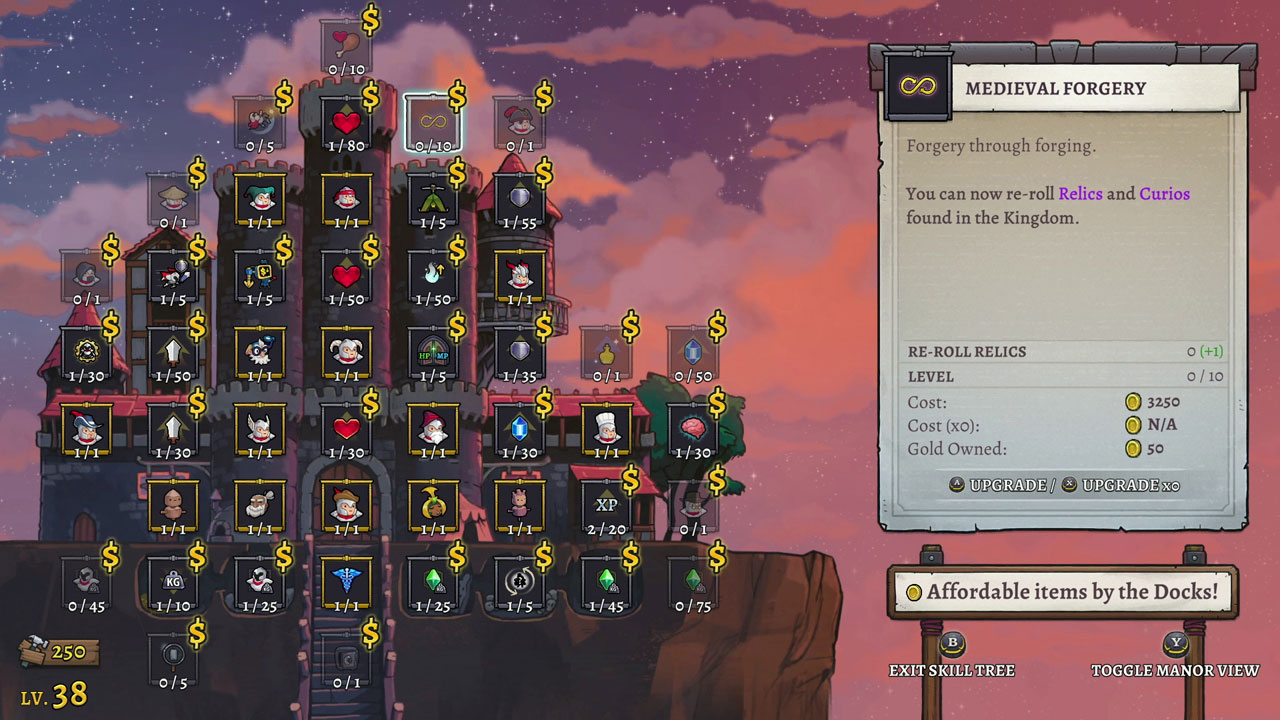 Once you’ve decided on an heir for your next run, you spawn into your own manor that can be upgraded with gold to unlock new classes, features, and various enhancements for your current and all future heirs. You can peruse the blacksmith for new equipment (granted you have the proper blueprints), activate beneficial runes (granted you have unlocked them first), and more before you decide to take the plunge into the fallen Kingdom of Genesis for likely the first of many, many times. Once you head to those shores, though, there is no turning back. Unless you die, of course.

Genesis is composed of six randomly generated biomes, each with unique aesthetics, mechanics, enemies, and treasures. Your heirs will travel through each of these biomes by killing each one’s estuary, or boss, before finally opening the gate to what’s really going on behind the scenes. While most of your map progress is wiped across each run, some things are permanently unlocked (like boss kills), while others can also be set in stone for a fee (you can make the map “unchanging” via the architect, and can permanently unlock waypoints through the “pizza girl.” In the true Metroidvania sense, you will find heirlooms along the way that will permanently grant your heirs new skills and abilities (double jump, dashing, etc.) that will help you reach every crevice and depths of each location. 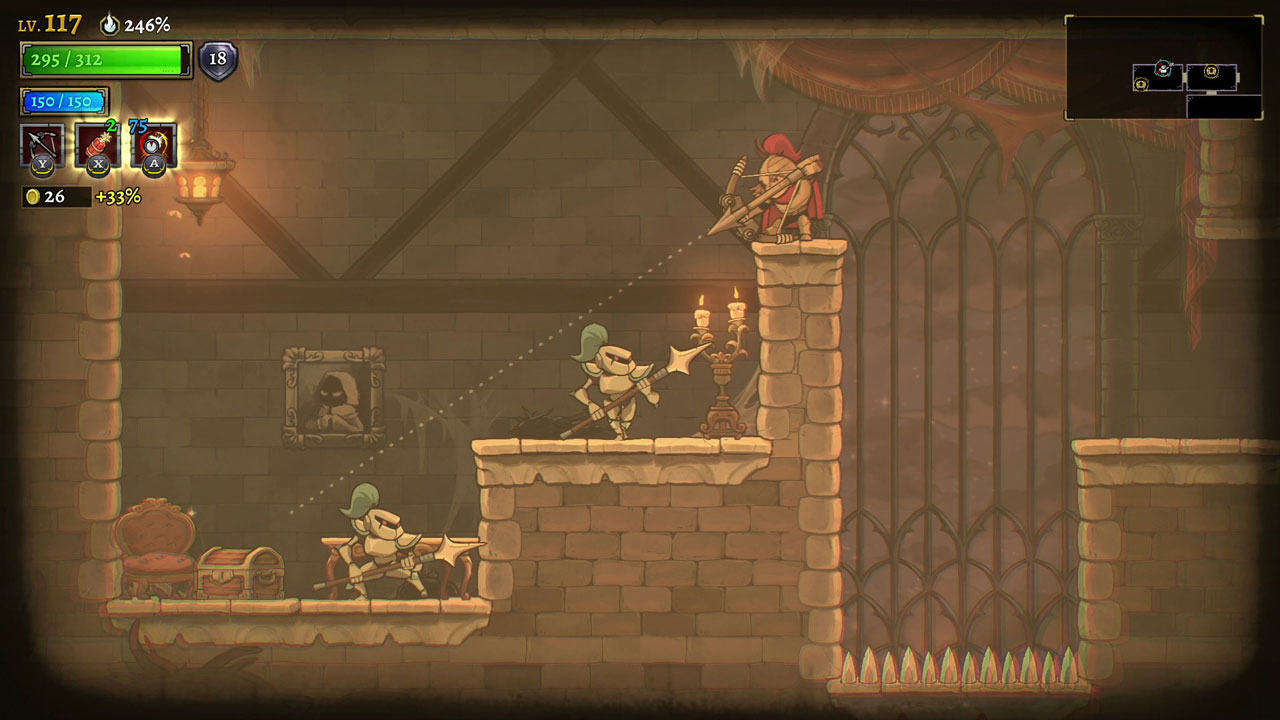 Your heirs may also come across relics scattered about the world, which can grant them powerful boons…for a price. Some relics innately grant crazy bonuses with potential caveats, but they almost always require some percentage of the heir’s resolve on top of that. Resolve is directly tied to your heir’s maximum health, and should their resolve drop below 100%, they will receive a penalty to their max health in the same percentage.

The amount of starting resolve varies from heir to heir, but is primarily governed by the current heir’s class and equipment weight. Wearing any and all armor may grant massive stat bonuses, but it will likely negatively impact your starting resolve as a result. Thus, a balance must be struck between an heir’s equipment weight and the number of relics they intend to carry, as to always be mindful of letting resolve slip below 100%.

Curios also can change the way an heir plays in Rogue Legacy 2. While each class naturally comes with a specific weapon and class-based talent, randomly generated curio shops allow the opportunity to apply different weapons, talents, and spells to the current heir regardless of their class. Want a sword-wielding chef that still has its iconic fire DoT ability? Or maybe you want a mage that can utilize the pirate’s airship for improved mobility and damage? Curios allow these dreams to come true, yes, but they also grant small stacking bonuses for every swap made during any given run.

If you thought the variety was impressive in the original Rogue Legacy, it has really been amplified tenfold here. There is so much that you are likely to never see every possible combination. That said, this does come with some potential drawbacks. Rogue Legacy 2 feels substantially more drawn out than its predecessor does, and I say “drawn out” over “longer” because additional length isn’t necessarily a good thing.

I found myself killing off many heirs prematurely even after buying multiple rerolls at the manor. Every class feels good to play and is unique from one another – they all should definitely be played at least once – but I only found myself resonating with a select few (namely the Knight, Chef, Assassin, and Boxer) and internally groaning every time I had to select one outside of my preferred wheelhouse. And you basically want to unlock every class since oftentimes, they are crucial to unlocking other things at the manor. 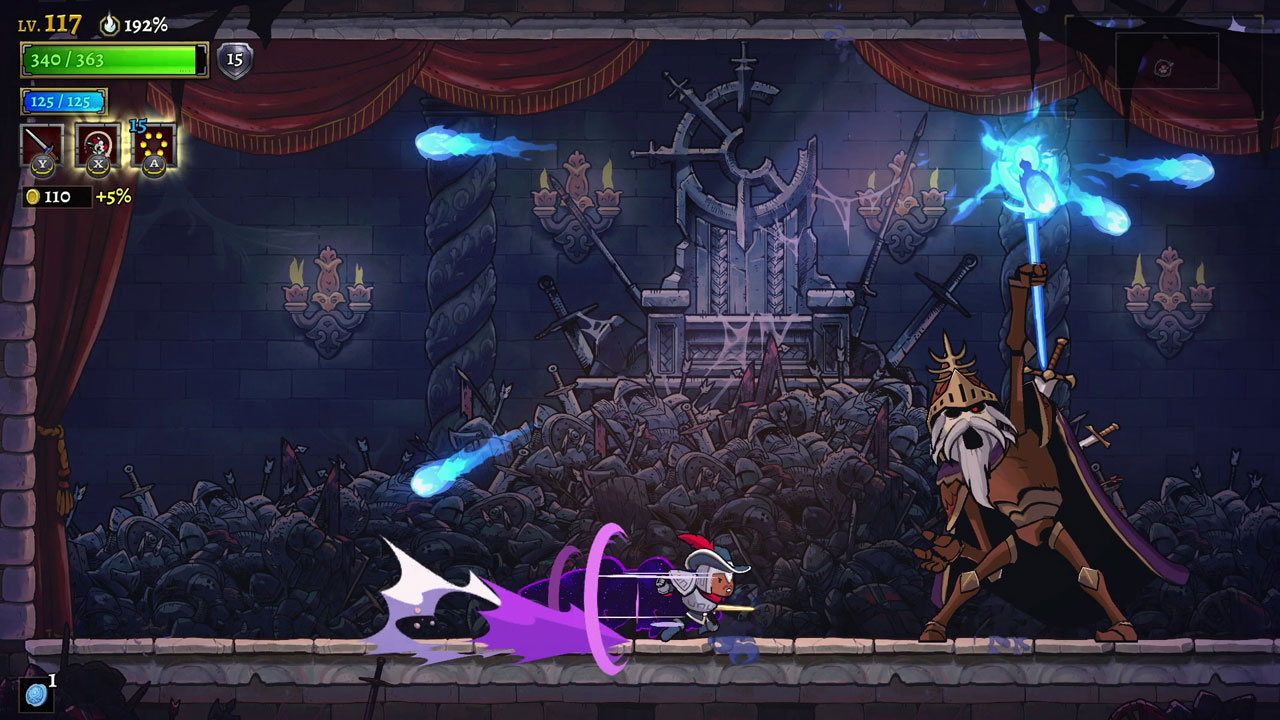 Boss fights have a satisfying level of difficulty to them, but I found that trying to best most of them with classes without great mobility was a near impossible task, doubling back on the feeling of pigeonholing yourself into only a handful of classes that, more often than not, will not be available to you with each new heir. It gets to the point where you might question the necessity for additional variance in this sequel at all, since the original Rogue Legacy was a near perfect game with less bells and whistles.

But the truth is that outside of these personal aggravations, Rogue Legacy 2 is leaps and bounds beyond that of its ancestor in terms of gameplay. The combat and traversal mechanics feel far more polished and refined than before, and the additional “house rule” features allow you to increase or decrease the difficulty of the game at virtually any time. While I may have some gripes about how the game achieved a lengthier playtime, Rogue Legacy 2 is hands down superior to the original in almost every respect. And truthfully, I’ve only scratched the surface to what the game has to offer, since a new game plus is unlocked after beating the game that not only expands on the gameplay, but also throws in additional lore tidbits that you apparently won’t find in the base game. 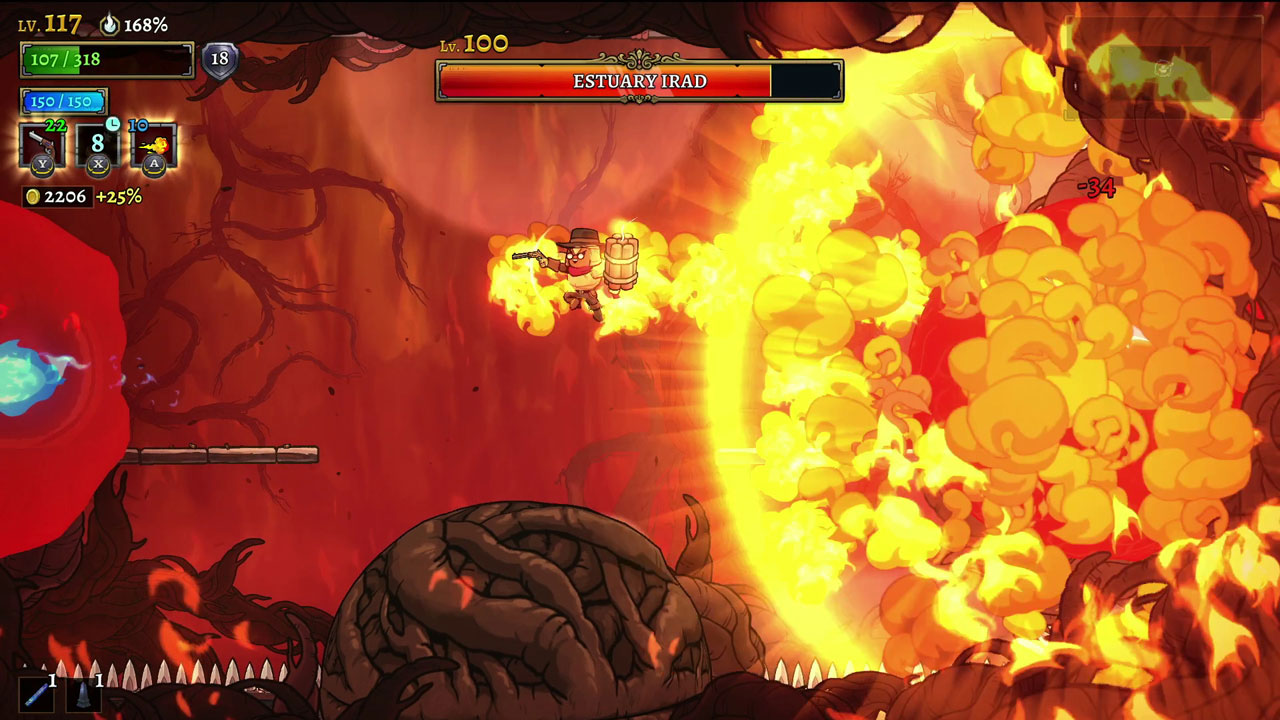 The Rogue Legacy series has always been about learning from the mistakes – often YOUR mistakes – of the past, and Rogue Legacy 2 is no different. The narrative fully embraces this idea once again but adds a lot more complexity and depth to it as well, so much that I don’t believe I’ve fully comprehended it with just a single run. What is made apparent, though, is that someone wanted to live a really long time again, and Genesis itself has many parallels to the stories told in the Book of Genesis in the Christian Bible, including a tree of life, Cain and Abel, a subsequent betrayal, and more, though they have definitely put their own unique spin on things rather than simply adopting those wholeheartedly.

Full disclosure, I found the narrative a bit hard to follow since it’s almost exclusively doled out in journal entries and memories of spirits whose worldly bodies passed long ago – you may not have the same issue. Either way, what I did understand was compelling, and did keep me interested to see the end; at least the end of the base game, since my understanding is that there’s even more context given during subsequent runs as well as NG+. Even if you aren’t interested in the overarching narrative itself, you’ll probably enjoy one or many of the witty characters scattered about Genesis that really help offset the dark and grim tale that is told.

Gameplay isn’t the only thing that has received a massive overhaul in Rogue Legacy 2. The aesthetic package the sequel has brought is light years ahead of its predecessor without ever losing the charming, cartoony essence the series is known for. Many assets are stunningly hand drawn with some nice lighting and rendering effects thrown in to spice things up. The wacky art direction of the sprites really comes to life by way of 3D (or at least being “3D in spirit”). Performance is also up there in terms of quality, with only a handful of instances of slowdown or stuttering throughout the experience – a must-have for any Metroidvania worth its salt. 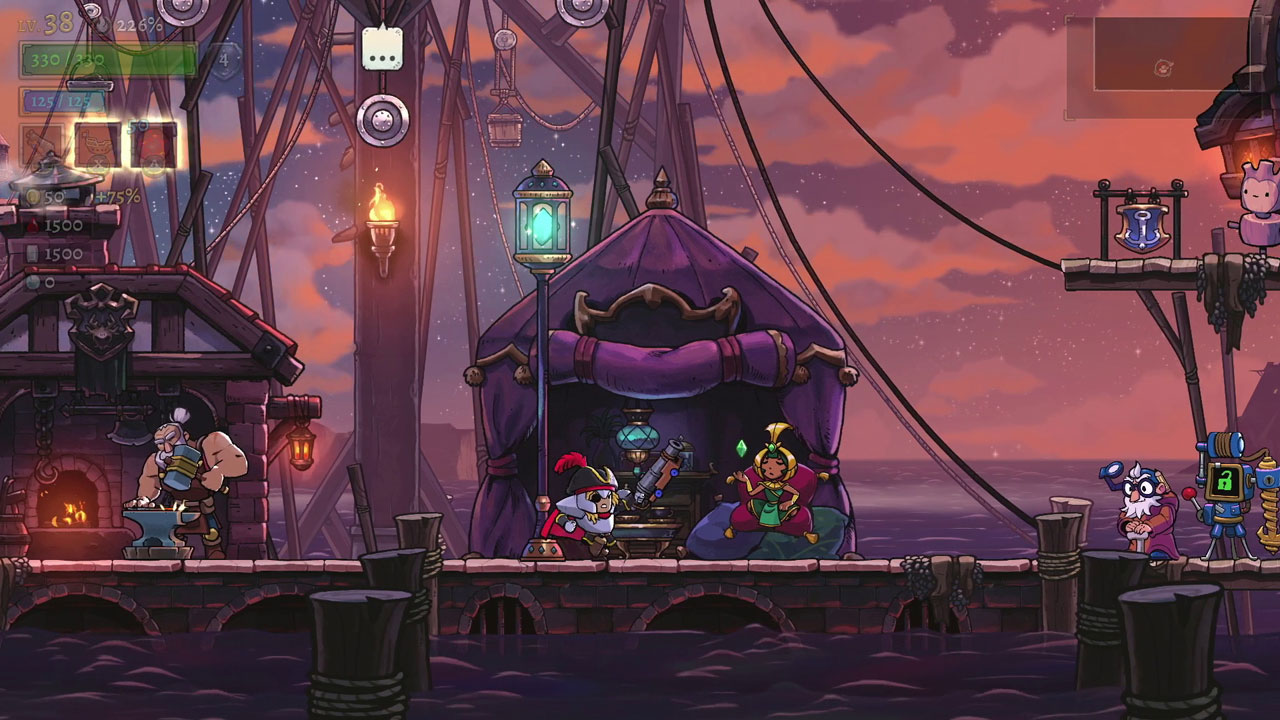 Cellar Door Games have somehow managed to make a near perfect roguelite even better. Rogue Legacy 2 improves and expands upon just about every aspect of the original game without losing what made the series so special in the first place: excellent gameplay, satisfying progression systems, and lots of unique heirs that may or may not make you laugh, cry, grimace, or smile depending on their genetic makeup. While I do feel like the overall runtime of the original was more appealing to me personally, there will certainly be those that feel the exact opposite and really appreciate how all the changes have padded out the gametime even more here. Regardless, Rogue Legacy 2 is an absolute necessity for roguelite and Metroidvania enthusiasts alike.