Rise of the Slime Review (Switch) 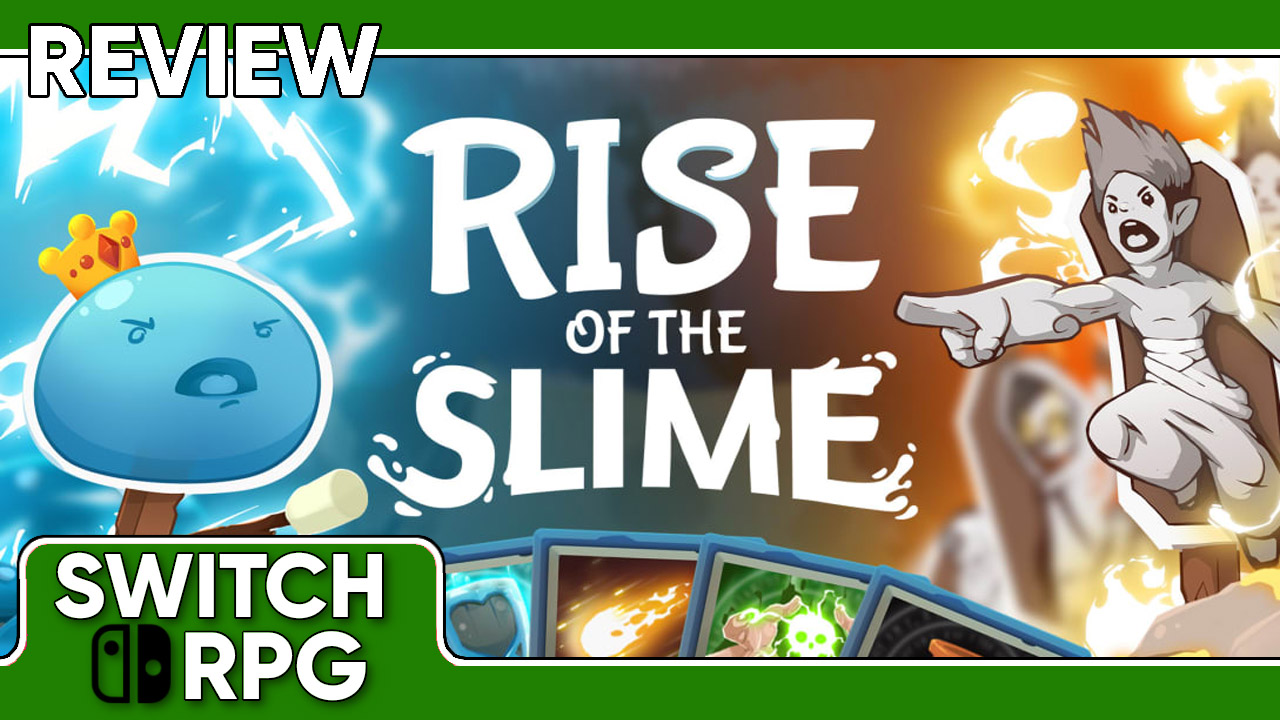 Deck-building RPGs have an inherent appeal, in that they add a degree of luck and predictability to combat. However, there are a variety of ways deck building can add complexity, which can make the prospect inaccessible to those unfamiliar with the basics. Games like Slay the Spire and Everspace have a hard difficulty curve, which usually involves learning the specifics of their procedural design and the essentials of each playable character’s mechanics. For players looking for a more accessible roguelike deck-building experience, Rise of the Slime might be a wise choice. If you are looking for a brisk experience, however, it is not without its flaws.

Rise of the Slime has players proceed through a variety of rooms filled with skirmishes, progression upgrades, and specific choices that can prove essential to survival and completion of a single run, or campaign. For any of those already familiar with roguelike deck builders, the gameplay loop should come as no surprise: if you enter into a room with a combat skirmish, you’ll need to clear all enemies and gather their rewards before moving to the next. There are some rooms with randomized modifiers, high-risk, high-reward games of chance, and the occasional shop that allows access to card upgrades and the like- fairly standard fare. The intricacies of combat are another matter, however. 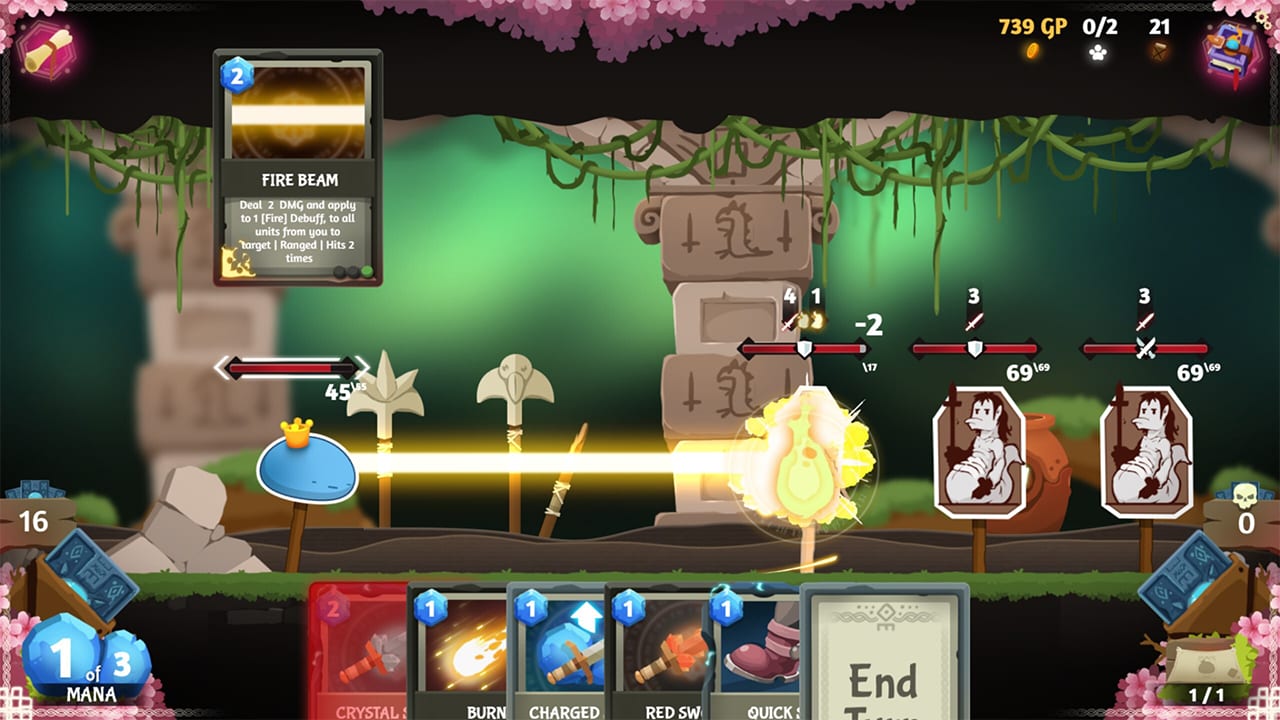 Combat has players draw four cards from their deck per turn, each requiring certain amounts of mana to perform. The game adds two folds to standard turn-based gameplay in that there are environmental interactions and movement. The former mechanic allows tiles of the room to be modified by attacks, such as fire or poison, but there are also pots and other breakable objects that players can lift and drop on enemies free of cost or consequence. This is a rare tactic, but one that can be beneficial, in the proper scenario. In the latter instance, players can move around and separate enemies by using specific movement cards, and attacking an enemy from behind can result in a double-damage backstab.

Enemies will occasionally drop more than one card pack per battle, but most felled opponents will grant coins, which can be spent for specific upgrades at shops or shrines. One of the more valuable opportunities can be a specific upgrade shrine that allows the player to choose between health, mana, or additional pets for a hefty price. Pets are a simple concept: a summoned creature that will automatically perform an action at the end of your turn that can greatly benefit the player in a variety of ways, whether it is adding more of a status effect counter or buffing defense further. Throughout your journey, these pets can be upgraded to perform different actions themselves, whether it is to further defend a player towards the potential downsides of their own build, or further increase their offensive power.

This is ancillary in regards to the initial build of the player themselves, of course, which can be altered in a variety of ways. Players can use any leftover currency from their previous run to grant themselves a particular health, mana, or pet upgrade at the start of their journey, and choose which pet they would like to set out with. This is in addition to the kind of starting deck the player chooses, which can be themed around a specific elemental playstyle or left open for a very experimental style with a standardized set of attack and defend cards.

Rise of the Slime uses a simple, puppet-show art style, where the player character and enemies are depicted as cut-out, framed figures glued to sticks, which bob up and down in anticipation and teeter back and forth as they move from space to space. While cute, it adds little to the overall effect of the art style, as all effects and elements otherwise are devoid of papercraft charm. Aside from this slight aesthetic inconsistency, every character is illustrated in a cutesy, cartoonish style, and the backgrounds are similarly themed to the kind of deck you choose when starting a short run, with a slight gradient softening up the details and making things appear vaguely fantastic.

There are several themed locales, however, and they do fit the high fantasy and medieval vibe the game gives off. The card illustrations are very simplistic, but this is certainly intentional, as it is easy to identify what options you’ll have available each turn. The music in the game is rarely confrontational, coming across as serene more often than not, and doesn’t add much to the tension of combat. 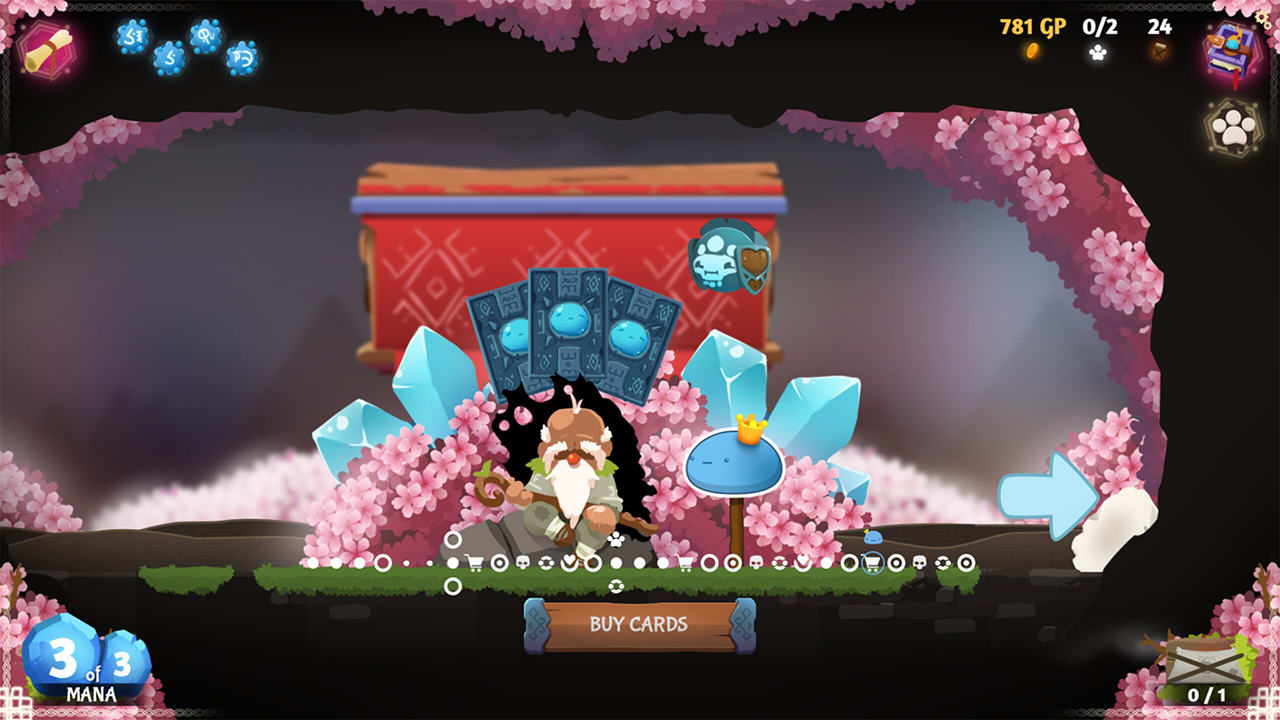 Of course, tension doesn’t really seem to be the name of Rise of the Slime’s game. Animations play out very slowly, and there’s no way to toggle the speed or the depiction of these elements as they play out on the screen. The draw animation at the start of each turn in particular is obviously something you should expect to see many times, but the speed of the setup drags severely in comparison with contemporaries in the genre. It all makes for a somewhat subdued, methodical experience.

As someone accustomed to the brisk pacing of a daily run in Slay the Spire or Everspace, or even familiar with the quality of life features in games like SteamWorld Quest, Rise of the Slime is an inoffensive, but very poorly paced experience. The game features three difficulty modes for the kind of journey one can undertake: long, short, and challenge, ranging from easy to hard in that order. The short journey challenges are frankly a terrible starting point, as they require a degree of luck and rogue-lite preparation (as accrued gold from the previous run can be spent at an upgrade shrine before the next run) in order to succeed. 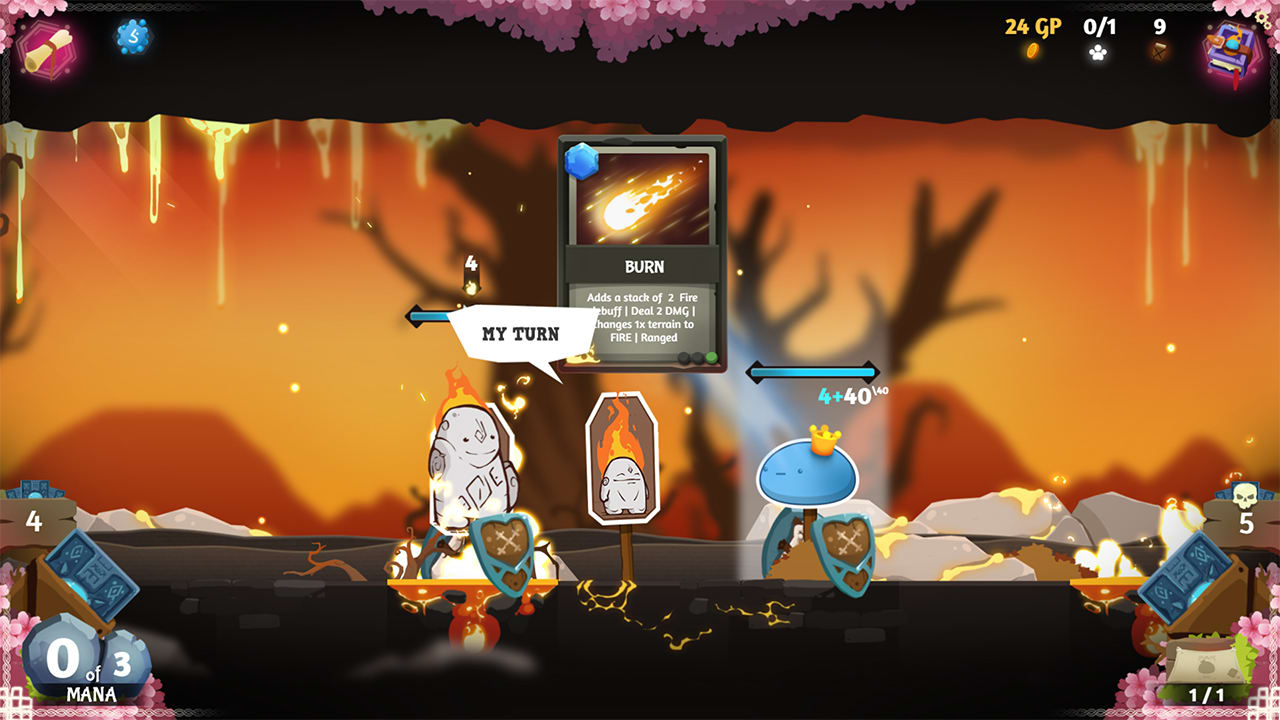 Short and challenging journeys feature randomized mutations at the start of a run that can cripple any deck, so you need to be very smart and conservative in your approach if you hope to complete either of these difficulties. While the game boasts that no run is the same, short journeys seem to have the same boss fight setups, which are more often than not run-enders. The long journey, however, is much more forgiving, often offering save points where a player can restart and attempt to change their fate with a few rooms to spare before coming across the challenge that felled them. Completing these challenges offers little more than new hats to offer your Slime, but with the amount of starting decks on offer, familiars/pets to couple with them, roguelite carry-over boons, and the option of a randomized deck setup, there’s plenty to keep a player occupied for more than a few playthroughs.

While Rise of the Slime never feels incompetent or lacking, it is obviously stacked up against some rather heavy-hitters in the same genre. While it doesn’t feel fair to have to do so, the speed at which other deck-building games allow players to put together functional runs and progress through rooms does feel like a particular area in which Rise of the Slime falls flat. The game’s charming protagonist is unfortunately only as unique as its headwear, and despite having multiple play styles built into its assortment of cards, fire and poison damage feel a bit too similar in design to tell apart.

I’ve also experienced more than a few sudden crashes, which are easy to circumvent during long journeys due to save states, but are less rewarding when you’re playing a higher-difficulty challenge. Never terrible, but also never reaching the same heights as others in its genre, Rise of the Slime feels like a fine stepping stone towards more punishing and nuanced titles in the Switch library. Unfortunately, going from those games to this title isn’t as smooth a transition.