Rimelands: Hammer of Thor is the game a Chaos deity would create, if given the opportunity. Truly, only a Chaos deity would make a title that so heavily weighs on the rolls of the dice. Rimelands is a very light adventure, with only a moderate amount of depth within its talents, combat, and story. This is likely the result of it originally being published as an Apple mobile game, and unfortunately, this shows through in both its mechanical and graphical complexity. There’s definitely a few twists and turns, though all of these things are further let down by a weird mix of new and old-age writing. Let’s explore the shallow depths of Rimelands and discover what forces of good and evil are at work in Asgard. 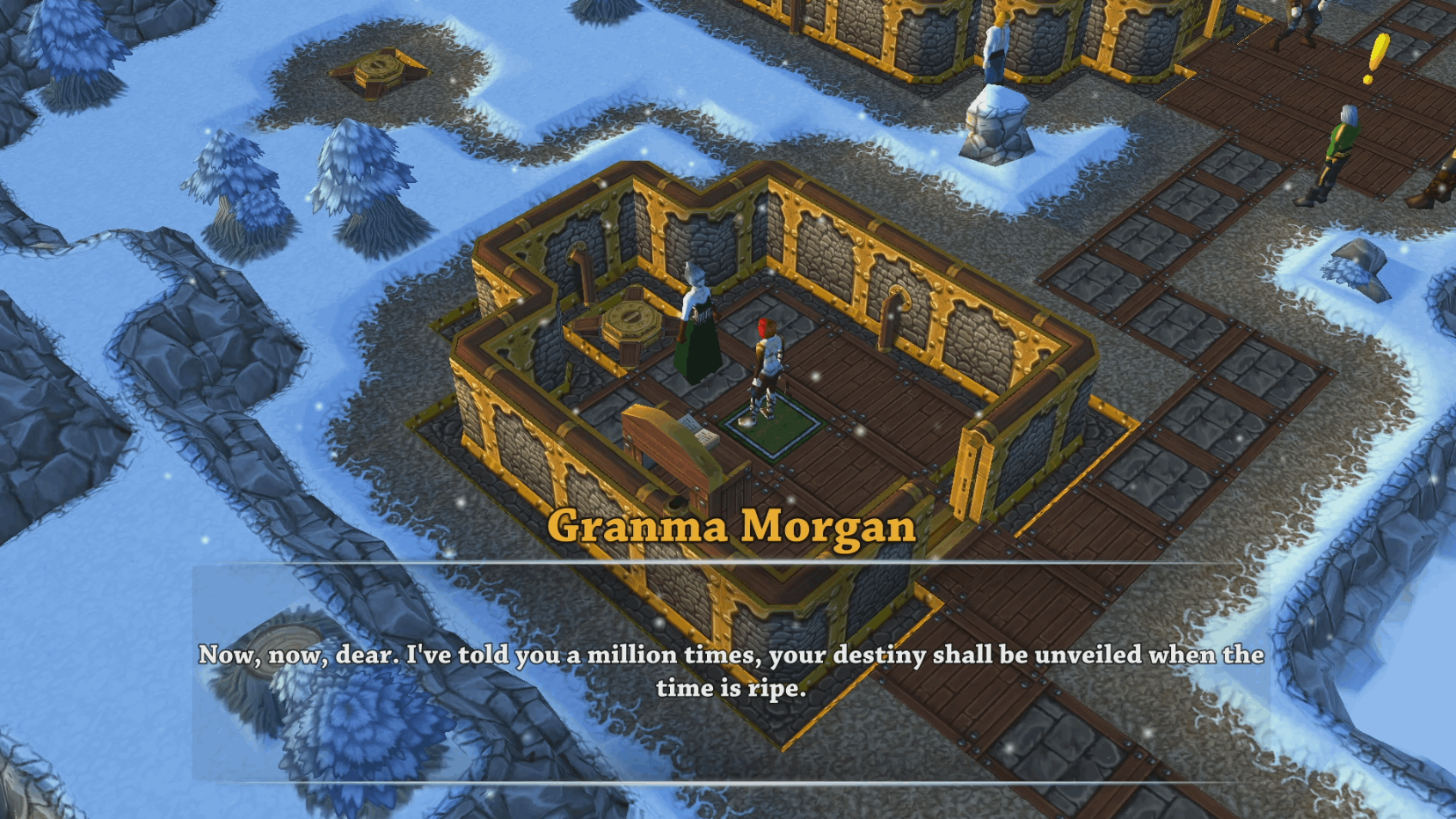 Rimelands puts you in the shoes of a young upstart treasure hunter named Rose Cristo. Raised by Grandma after your parents met an untimely end, you progress through the story and world seeking to uncover your destiny. Neither the game nor Granma are really keen to tell you much about it, however. The story really feels like it has one main and one side quest that feels like an errant letter in the mail. I’m not going to complain too much, though. The quick pace of everything helped progress the story at a rapid pace, which means any uninteresting or boring sections were quickly passed and soon forgotten. 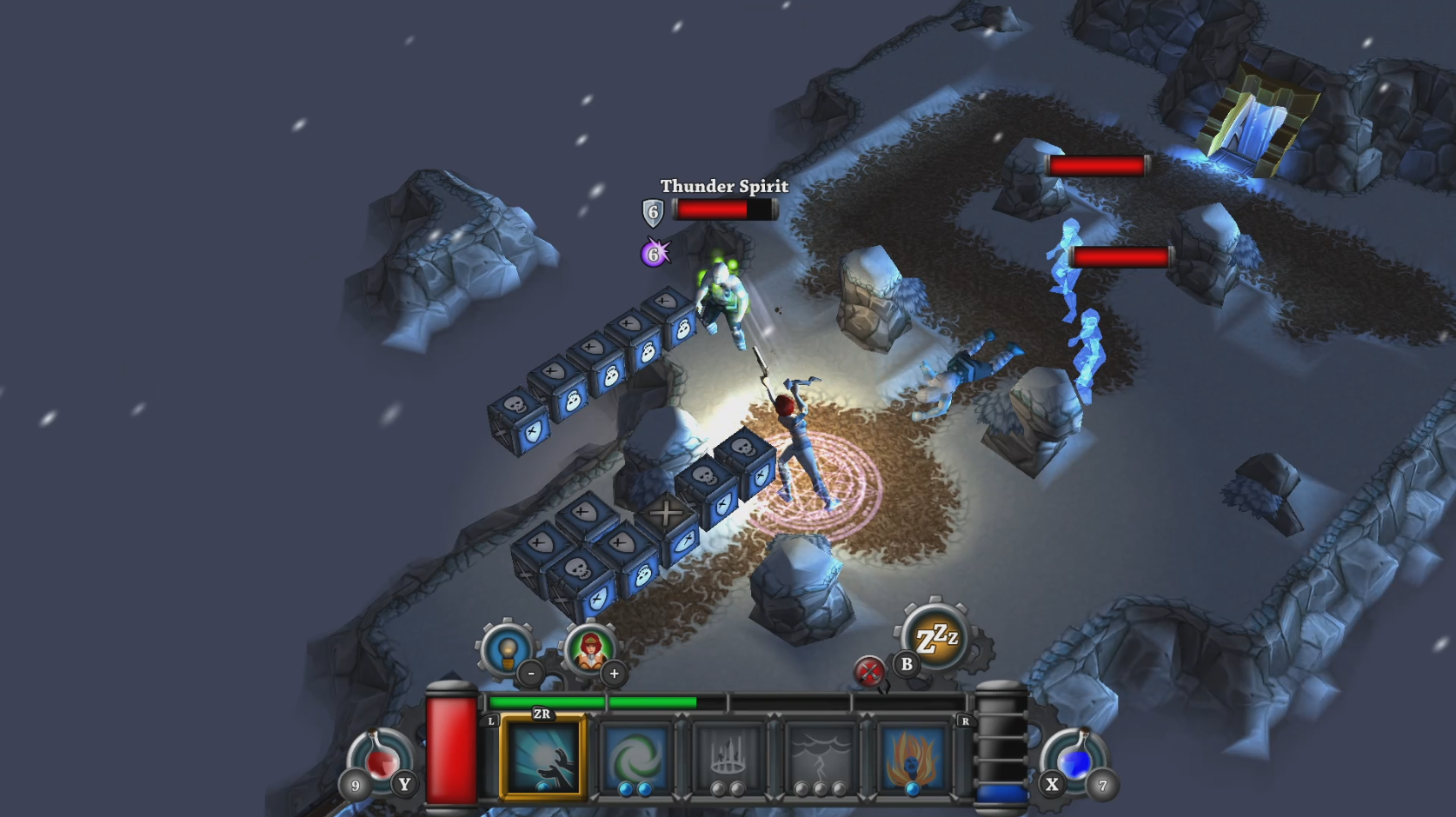 Rimelands is a turn-based strategy game where you’ll take turns jockeying for position with a grid-based movement system. When the time to cross swords arrives, it is up to you, your dice, and a little bit of luck to survive. You have the choice to attack an enemy with damaging magic, ranged, or melee weapons. Your weapon of choice will likely vary depending on which talent tree you spend your level-up skill points in. Both the attacker and the defender get to roll a set amount of dice once the battle starts. The attacker rolls for offensive damage, while the defender tries their best to avoid said damage.

While it’s quite complicated to put into words, attacks will succeed or fail based on a number of situations, but it all simply boils down to rolling more skulls than your enemy’s defense. Defensive stats called toughness and deflection will help defend against these attacks, as does rolling shields on your defensive roll. Mana is a finite resource, but you may use it to reroll any non-agreeing dice. For example, if you’re rolling six dice to attack and you only rolled 2 skulls, spending one mana will reroll all of your non-skull dice, giving you another chance to do damage. In Rimeland’s options, you can turn on fast dice rolls, which immensely speeds up long fights where not even the AI can get a good roll. 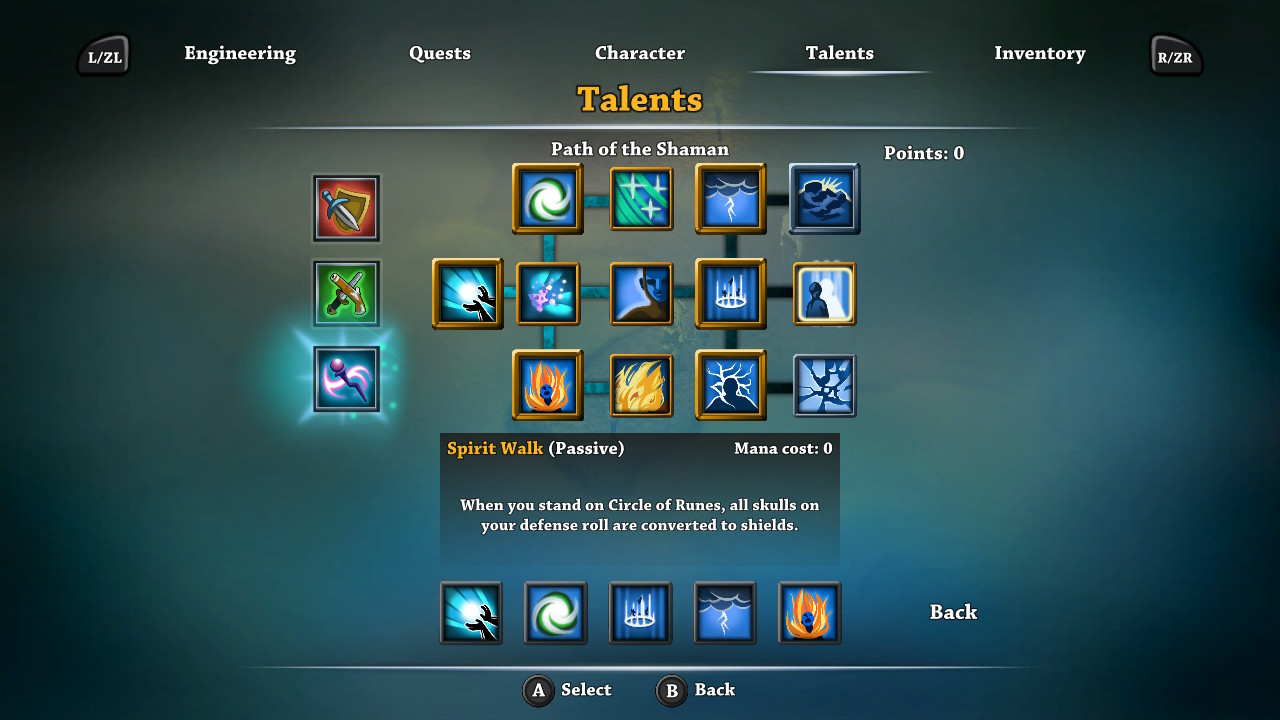 Rimelands comes with three different talent trees, including barbarian, assassin, and shaman. Upon leveling up, you are awarded a choice between these three. The talent trees are where the meat and potatoes of the combat system live. While playing as my Shaman, I was able to obtain a spell that lit people on fire for damage each turn, an area-based electricity attack, healing spells, and even one talent that automatically rerolled certain defensive dice. Although I didn’t explore the option, it also appears that you can multi-class and dabble in a little bit of everything, if you so choose. Don’t fret over the decision on what to choose next too much. I had nearly all of the shaman talents unlocked after completing the main story. 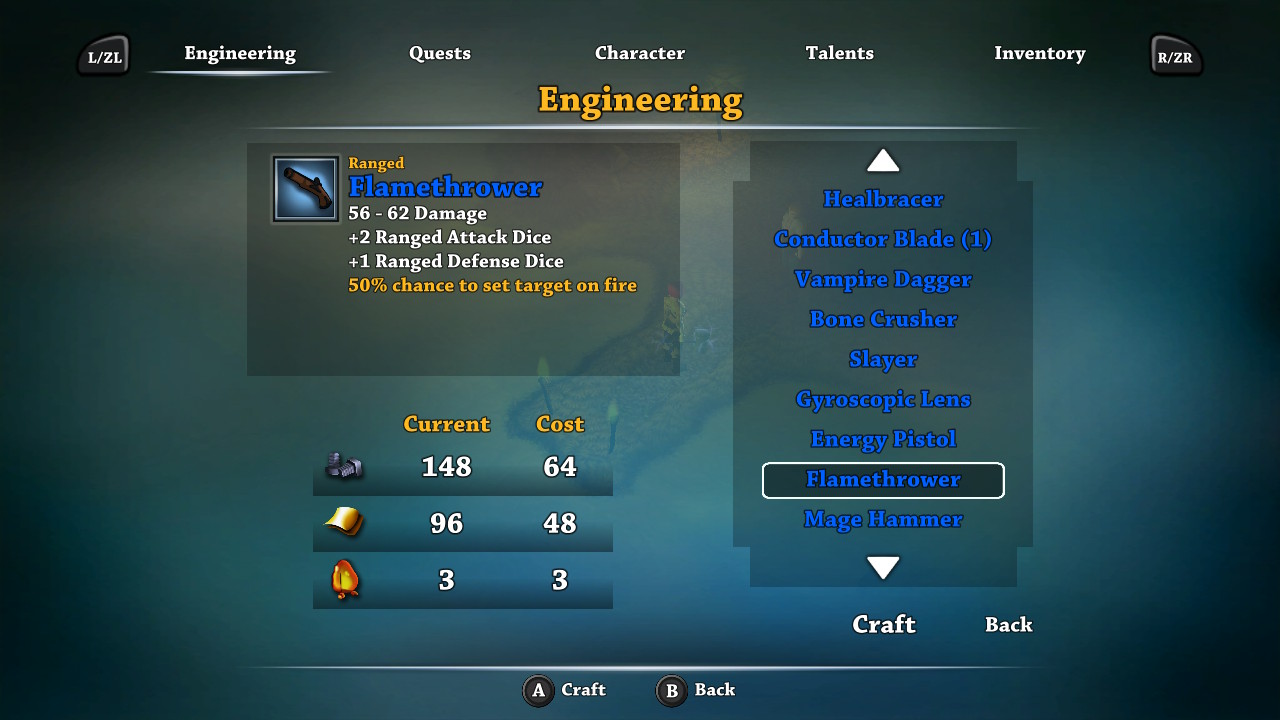 Rimelands: Hammer of Thor comes with what I felt were a good variety of weapons. Throughout my time with Rimelands, I found 2 different vendors who sold drastically different items. You also acquire a large number of items while adventuring through vaults, which had me constantly looking at my inventory deciding which option was better. I really enjoyed having to make these item management decisions, and it’s one of the highpoints of the game for me. Nothing felt better than finding that upgrade that gave me additional magic attack dice. If I couldn’t do more magic damage with it, I didn’t want to keep it around and quickly sold it or dismantled it for materials.

Rimelands comes complete with a crafting system. Found as rewards for quests or within vault chests are recipes for making items. Crafting these items requires materials you obtain from dismantling unwanted items. During my playthrough, I didn’t find many usable upgrades within the crafting system, although I might have just had a bit of bad luck with the recipe drops. Overall, the Rimelands crafting system complements the existing item management system nicely, and is there if you so choose to use it. 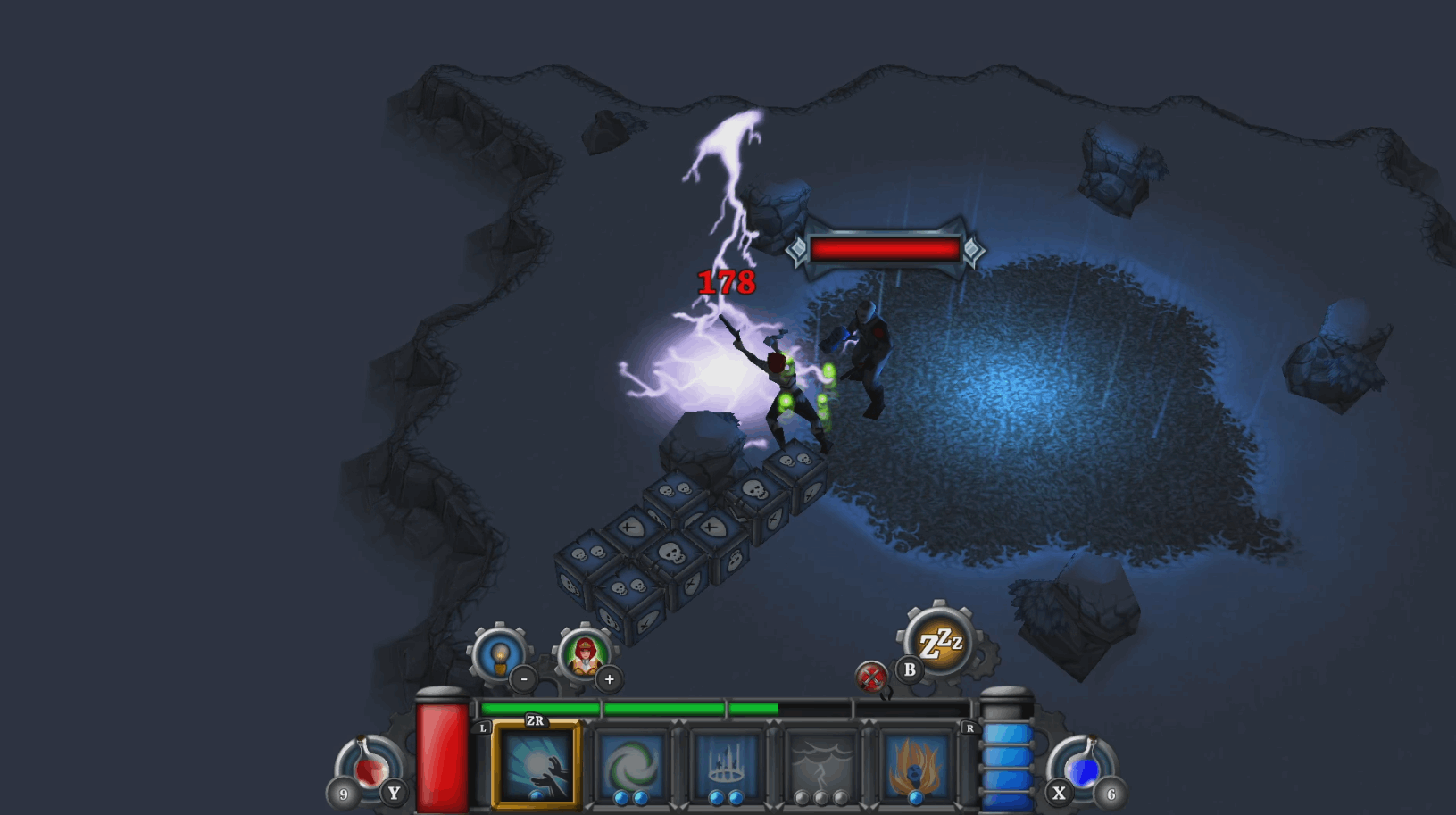 I’m a big fan of turn-based, dice-rolling elements- there’s just something about them that draws me in. Maybe it stems from my fairly large collection of board games and love for pen and paper role-playing games. I played through Rimelands as a magic-wielding shaman. The game felt really hard at first, but once I leveled up a few skills, increased my amount of game knowledge, and acquired some new items, the game started rolling along quite easily. In fact, I felt like I was completely steamrolling the entire second half of the game. It all felt a bit too easy, and the end boss was nothing but another enemy for me to run through. 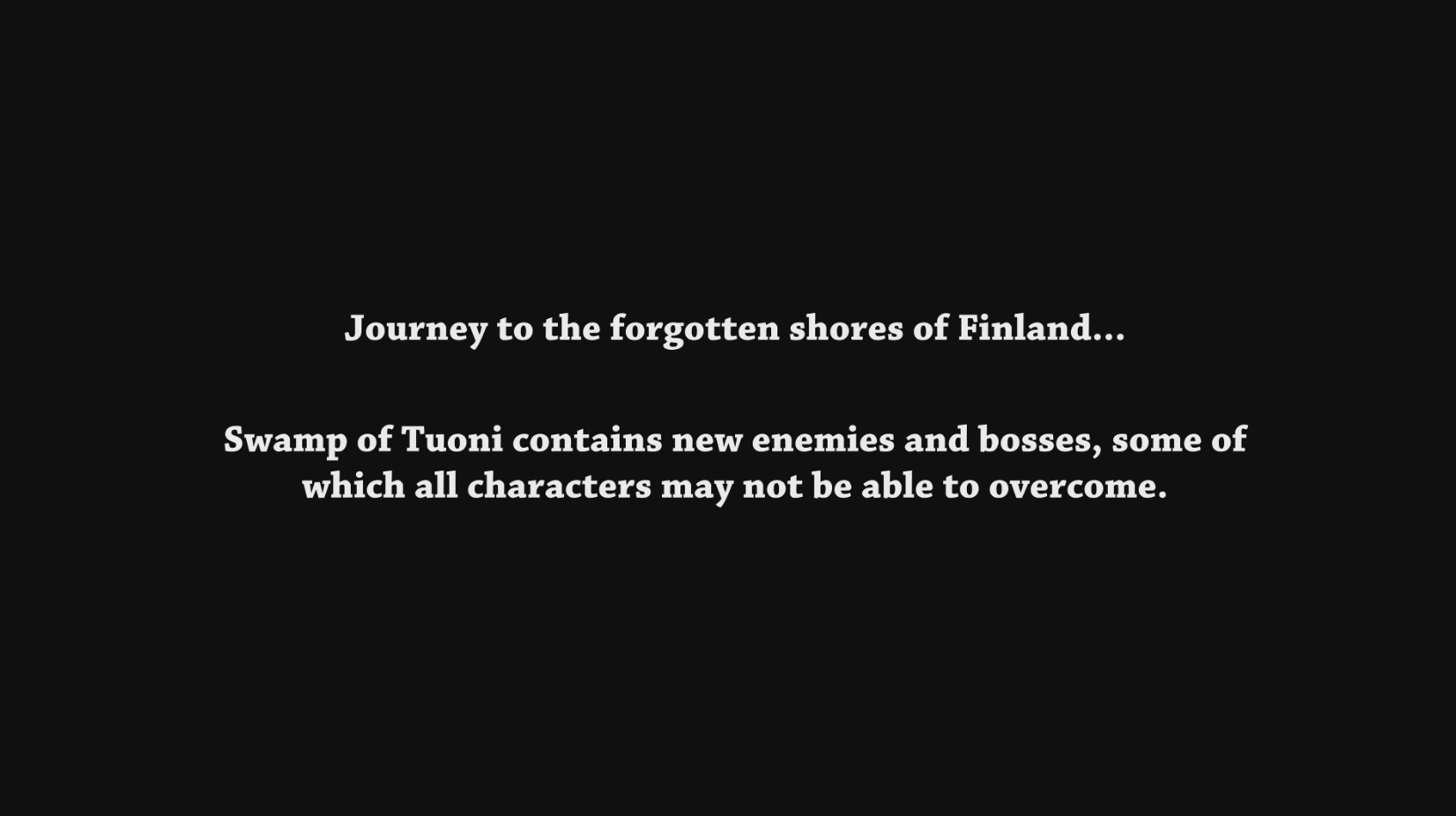 Postgame for Rimelands includes two different areas: the swamp, and a vault area. The vault resets upon completion and can be farmed for items and experience, while the swamp is static but contains some of the hardest bosses of the game. My character that so-easily ran through the main storyline was immediately stopped by nearly all the big bosses in the swamp. I guess I have some more farming to do.

Rimelands: Hammer of Thor comes plays a bit simple and is quite repetitive, but both the length of the game and the constant question of “what dice will I roll next?!” help lessen the pain on both of these issues. Unfortunately, Rimelands simplistic controls and basic visuals do really make it feel like an older generation mobile game. After seeing how beautiful some Nintendo Switch games can be, I really wish the port would have been given some extra love. For all of its negatives, there’s something within the simplicity and quick-paced nature of the game that drew me in. Some of the dice battles can be a bit of a slog at the beginning, but this quickly picks up as you gain power and skills. I’m glad to see some postgame content to keep the ball rolling, but there’s no real reason to play it other than to satisfy some internal completionist desires. The storyline really does stop right before the credits roll, but there seems to be some hints for a possible Rimelands 2…? We’ll just have to wait and see to find out. Overall, Rimelands: Hammer of Thor isn’t a bad game, but it’s not really great or truly engaging, either.

I dig the somewhat original idea of the dice-based combat, but the art style and story just seem to be uninspired. If it at least had a witty humor to it or some kind of other theme to draw upon it could have been great. Still, thanks for the review, Mike!