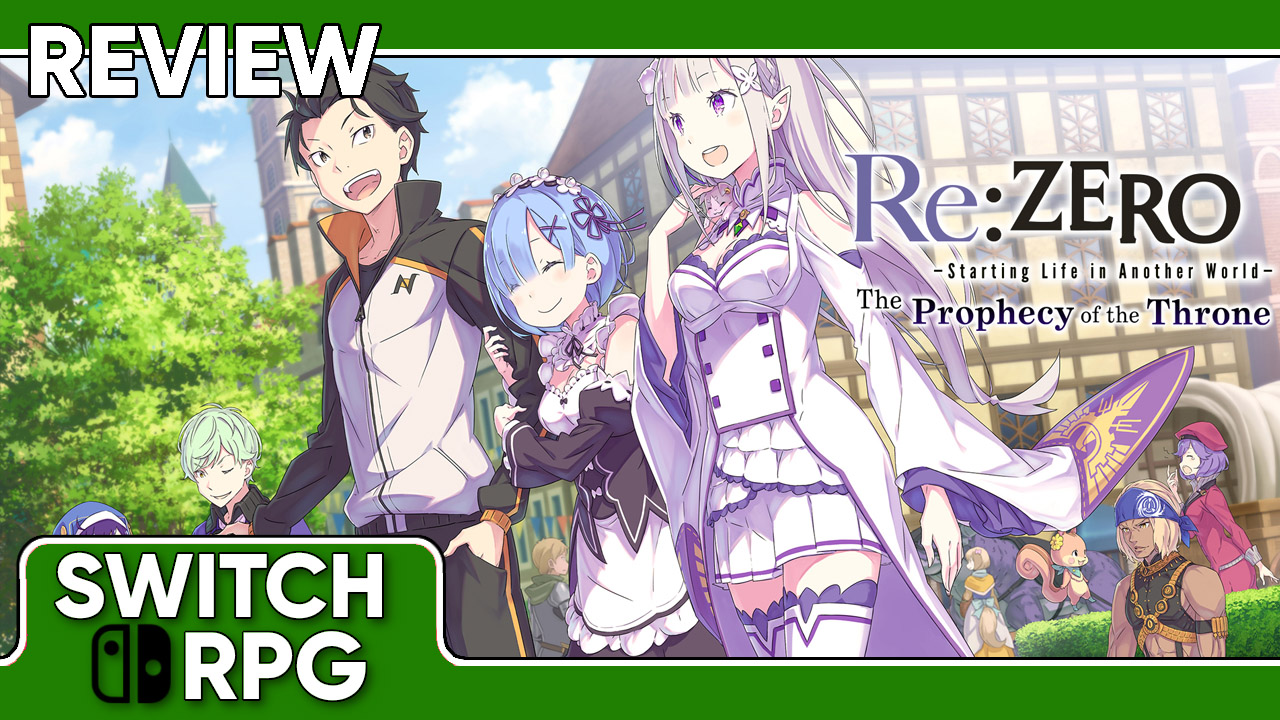 Games based on anime properties are always ones that grab my interest, yet leave me with a feeling of hesitation. At their worst, they’re either surface-level fanservice games with no substance or direct copies of the source material that leave fans with just another way to view the same story. At their best, however, they supplement the source material they come from while also carving their own space amongst non-fans and fans alike. While I can’t speak on the side of being a fan, Re:Zero is a game that did a good job at drawing in a non-fan into its story.

The story of Re:Zero takes place within the same universe as the anime and light novels, but features a new story that branches off during the events of season one. So, for both fans worried that this game would have been just a retelling of the source material and non-fans worried that they would need previous understanding, Re:Zero does a decent job at getting players up to date with the game and its characters. 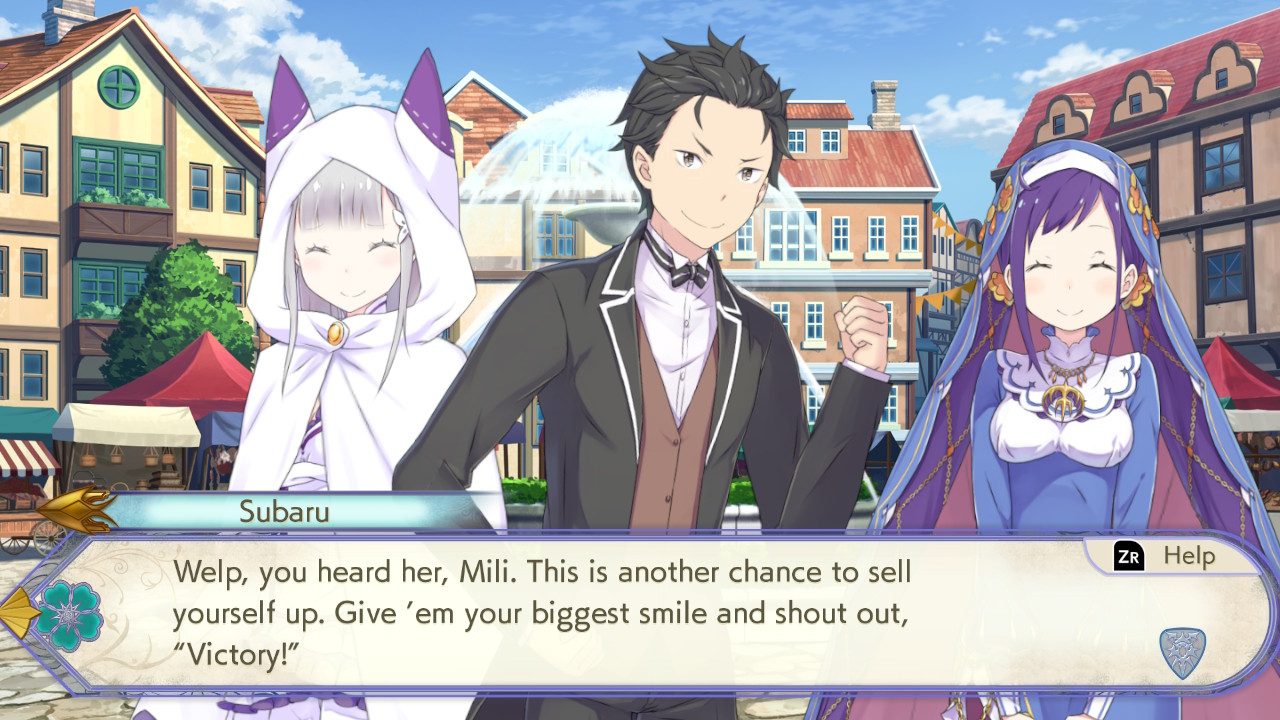 You play as Subaru Natsuki, a young man who found himself transported to another world. Being a regular guy, he has no powers and mainly has to rely on his quick thinking and smart mouth to get him out of situations. Along the way, however, he finds that he actually does have a power: every time that he dies, he is taken back in time to before his demise. Dubbed “Return by Death,” Subaru makes use of his ability to plan around disasters and save those around him.

Given that this is the main storytelling point used in the original series, it makes sense that this game does the same. You will go through the same general storybeats throughout the story, but as you will see, things will slowly unravel the more information is discovered. The story truly shows how changing one scenario will change what will happen next. So, if you are worried that you are just going to be seeing the same scenes over and over, worry not! 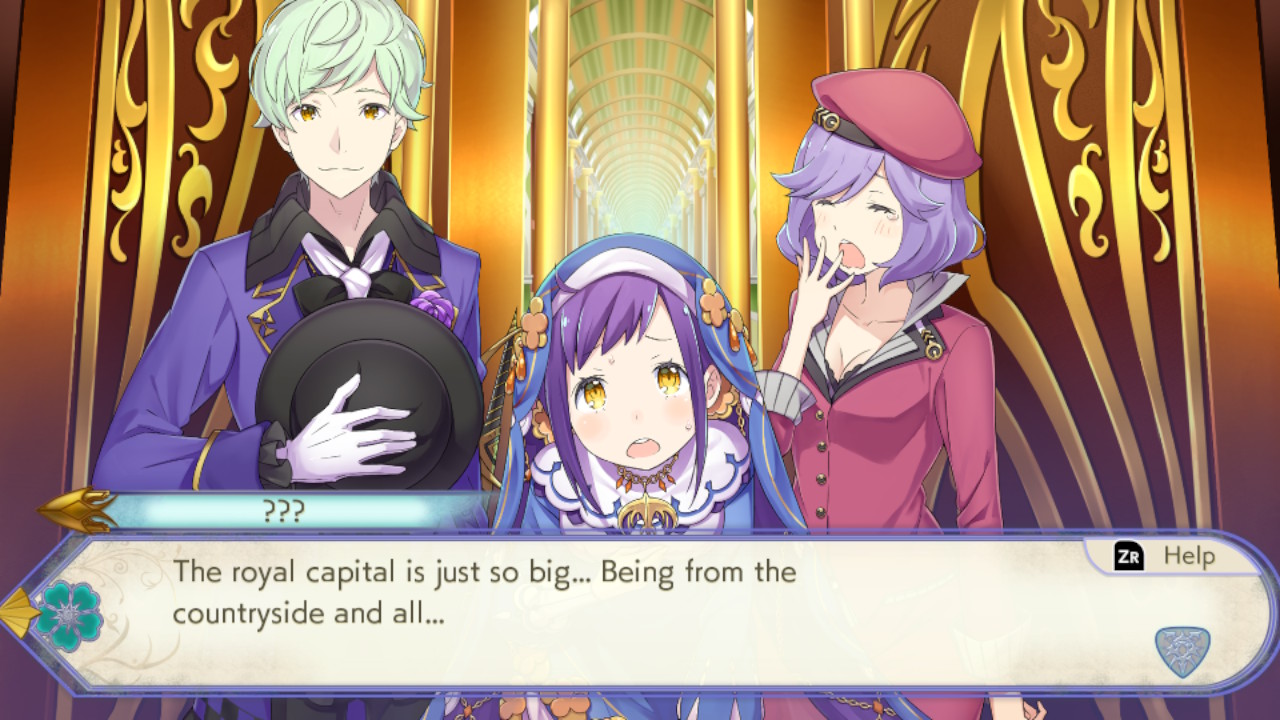 In the original story, there are only five royal candidates lined up for the throne of Lugnica, one of which is Emilia, who Subaru works alongside. But in this game, a sixth candidate has appeared, with one being dubbed as the imposter trying to steal the throne. Thus, it is up to Subaru and his friends to figure out who is the imposter while also trying to clear Emilia’s name.

Re:Zero – Starting Life in Another World is primarily a visual novel with occasional moments where you can control Subaru sprinkled throughout the game. The visual novel portions play out just like any other visual novel, where you watch the story unfold and you occasionally make decisions. However, the story of Re:Zero is pretty much linear, so any choices available only give the illusion of choice.

This can be confirmed by looking at the flowchart that the game makes available, which shows all of the story beats in the story, with grey boxes being the scenarios that you haven’t played out yet. Outside of moments close to where a mission is at where you can control Subaru, you can’t really change the course of the story. There are “bad ends” where the game will reset you back to the start of the mission, but that’s about the extent to where your choices will take you. 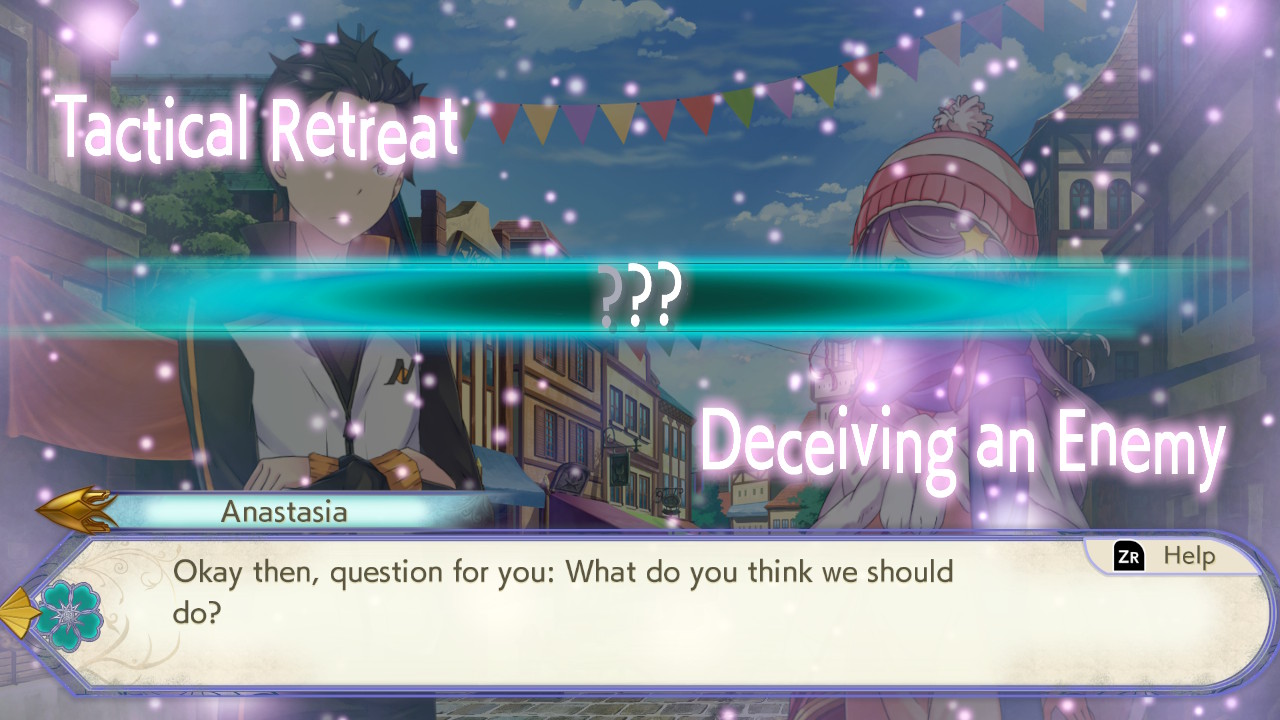 There are moments where you control Subaru and you have to talk to specific people or inspect certain locations. Once again, there is an illusion of choice, but the game has a specific set of steps it wants you to accomplish. And while that is fine, it was disappointing to be shown an overworld map, for instance, but only be allowed to travel to the next story location. At that point, it would have been better to just cut to the next scene than give the illusion of drawing in the player to make a choice.

Finally, there are missions, where you control Subaru once again and have to complete a certain task to pass said mission. Since Subaru is not a fighter, you will mainly be moving around the map talking to other characters or interacting with objects in the area. Areas that can be interacted with will have a blue glimmer around them. Subaru has a meter under him that depletes as you move around. Your turn will end once that meter runs out, or you perform an action. At that point, it will be the opponent’s turn to act. There will be other allies on the map as well, but you have no control over them. 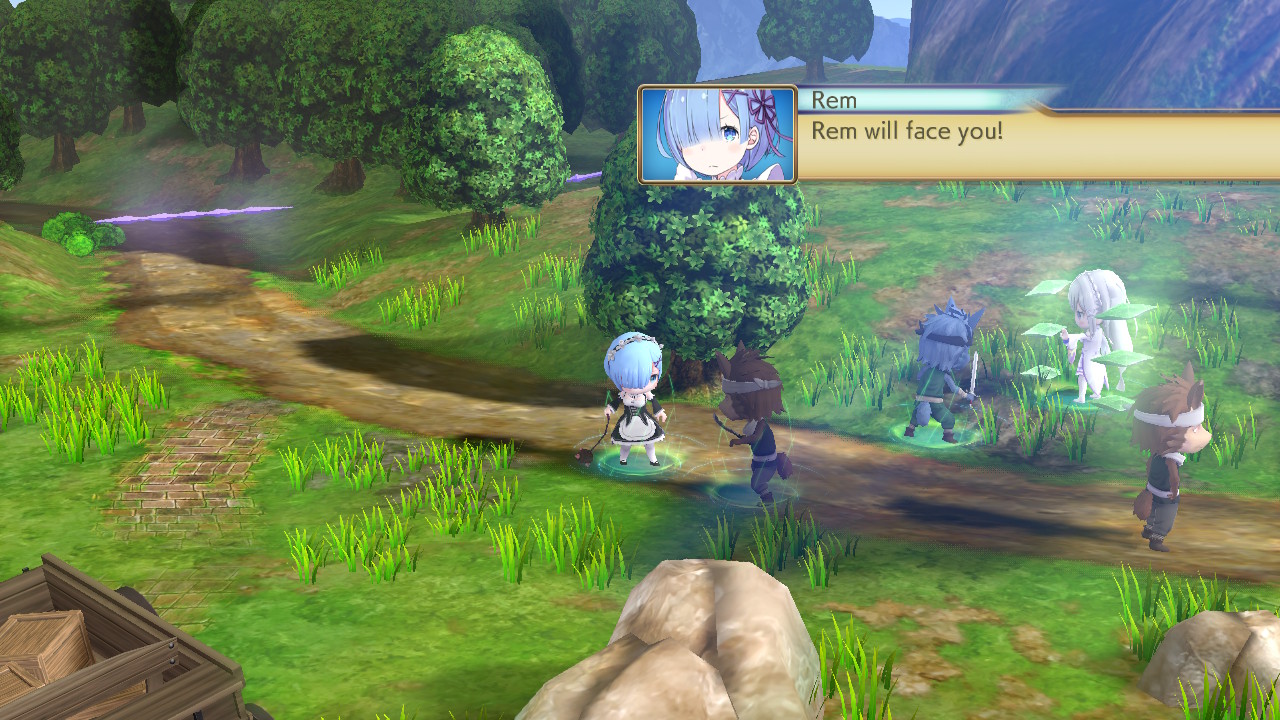 Truthfully, the mission portions felt more tedious than anything. Much like the navigational parts of the game, the missions are also linear. Outside of going for the “bad ends,” missions have to be accomplished in a certain way in order to pass, not leaving much in the way of trying different things. Along with that, some missions can feel convoluted in what exactly the game wants you to accomplish. I can understand wanting to make a visual novel game more interactive, but I’m not quite sure if this was the way to do so.

The game utilizes both 2D and 3D art within the game. For the visual novel portions, the characters are illustrated with 2D art, using the Live2D engine to animate them. For those not familiar with Live2D, it is an alternative animating option to give motion to 2D art without drawing frame-by-frame or creating a 3D model. You’ve probably seen it in action thanks to V-tubers. It can be a bit off-putting to look at for those not used to the movement style. But compared to other visual novels available, it’s cool to see this technology being used outside of gacha games and smaller projects. For the navigation and mission portions, all characters are displayed as 3D chibi models. While they are cute in their own way, they aren’t really anything to write home about either. 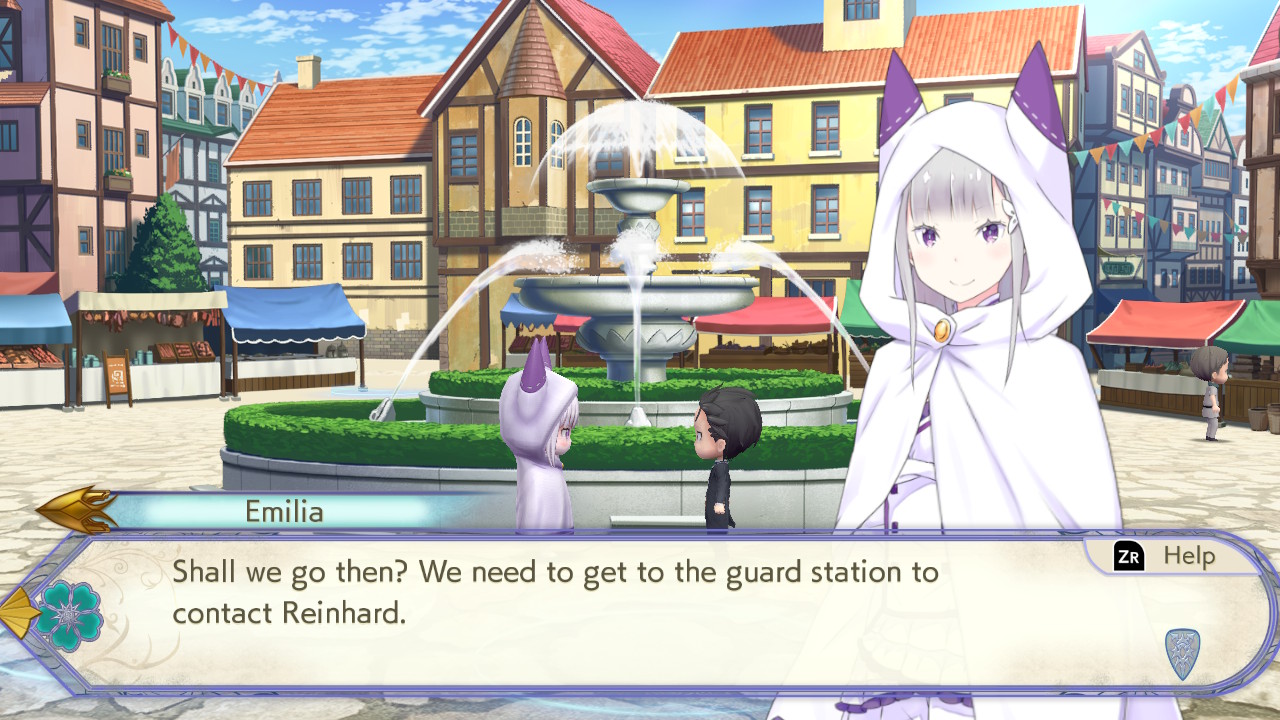 The entire visual novel, outside of Subaru’s inner monologues, are completely voiced by the original anime voice cast. There is both an Japanese and English voice option, for those who have a preference between the two. Both did a great job with the characters. I also appreciated the sound effects used to depict combat. While they are just specific weapon noises looped continuously in the background, they do a great job of breathing a bit of life into those scenes.

When I first heard about this game, I was hesitant, but excited. I didn’t really have a lot of knowledge of Re:Zero outside of watching the first episode of the anime and watching a synopsis video prior to purchasing the game. Ultimately, though, I found myself enjoying the game a lot. Looking back, perhaps the surprise of who the imposter is has more impact for non-fans, but I do think that fans of the series will enjoy this game, as well.

While the mission portions of the game could have either been handled better, or removed entirely, the story leaves a feeling of satisfaction. For those who were curious about the “strategic” portions of the game, there’s not much for you to really chew on. Visual novel fans, however, will find Re:Zero – Starting Life in Another World a worthwhile endeavor.