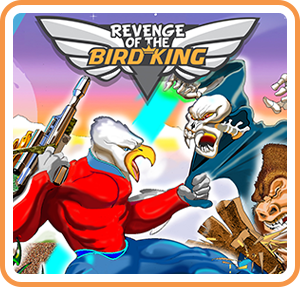 I have never been what you would call a platforming connoisseur, but there was a time years ago when I really enjoyed the genre, specifically in the NES era. Mega Man II in particular was a frequently chosen game when I was able to rent something from my local Kroger’s video game department. Revenge of the Bird King hearkens back to the old-school platformer era by combining one of my least favorite AND most favorite games into one: Zelda II and the early Mega Man games, respectively. But have I been blinded by nostalgia, or does the modern take on the previously mentioned retro classics hold water? 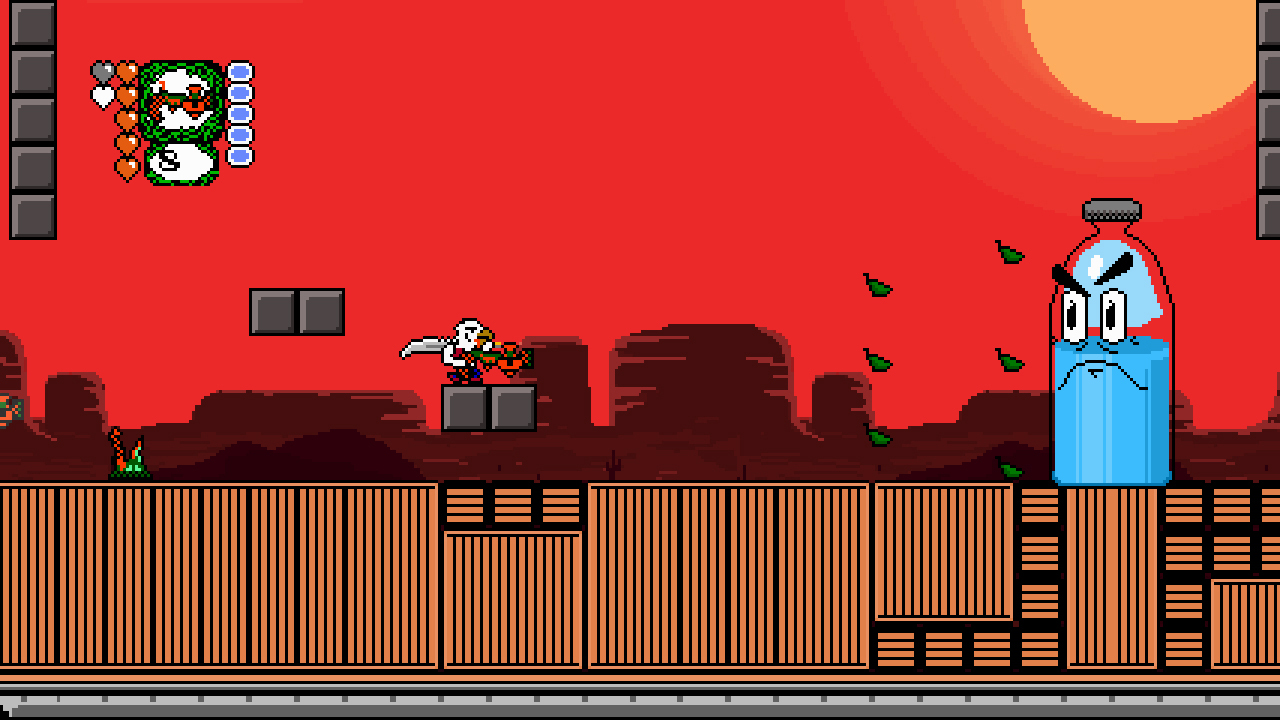 President Eagle, sole survivor of his people and leader of Gunworld, is destined to preserve his ever-fading legacy from a group of “superheroes” that happen to conveniently function similar to robots found in the Megaman series. They see Gunworld as only a former husk of violence and greed, and will stop at nothing snuff President Eagle and his dying legacy out for good.

Revenge of the Bird King is the third (and perhaps final) game in the Gunworld franchise, a series thats existence I was not aware of before writing this review. While some games allow you to get away with not knowing the ins and outs of the the entire series, I feel like a better job could have been done with that in the regards to this game. It does not really explain the underlying plot despite unloading a massive amount of text at you after each boss fight. But seeing as even the game’s description states that it’s a “tale of mystery and nonsense”, you could say that the actual importance of understanding everything completely is minimal at best. If you care to find out the “how and why” behind the current state of Gunworld, perhaps that is better answered in Gunworld and Super Gunworld II, but I cannot say for sure.

Revenge of the Bird King has you traversing a world map to take on various levels in traditional 2D platforming fashion. After completing the brief tutorial, you are free to explore as you see fit, and there are many instances where you can decide where to go next between a few possible choices. Content progression is handled in a Metroidvania / Zelda II way, where you often must find certain tools and/or complete specific objectives in order to further progress the main campaign.

President Eagle has an arsenal of guns at his disposal, as well as his trusty knife, which can be used to damage some foes and climb certain obstacles. Your initial gun has unlimited ammo, granted you take the time to plant and harvest gunplants. Yes, you can grow your very own firearms in this game but don’t question the logic behind it as we’ll likely never know the answers to those secrets. These Gunworld-exclusive plants provide you not only with a steady stream of ammunition, but deploy-able turrets as well.

You will find that some enemies require you to damage them with your knife before finishing them off with a gun blast, or vice versa. Although most enemies have obvious attack patterns, the weaving of your skills to take some of them down, especially when faced with multiple opponents at a time, feels nice. You’ll develop an affinity for other guns, such as the bee shooter, leaf blower, and even a double jump gun, as you defeat the “heroes” that want you dead. These Megaman-like special weapons have their own version of turrets as well. Speaking of turrets, they are a bit too overpowered when it comes to bosses, because you can easily set up a death trap that will obliterate them in seconds. They are simply too good to ignore, and I would have preferred a more structured weakness system akin to the Megaman series rather than being able to melt everything with an infinite amount of turrets. 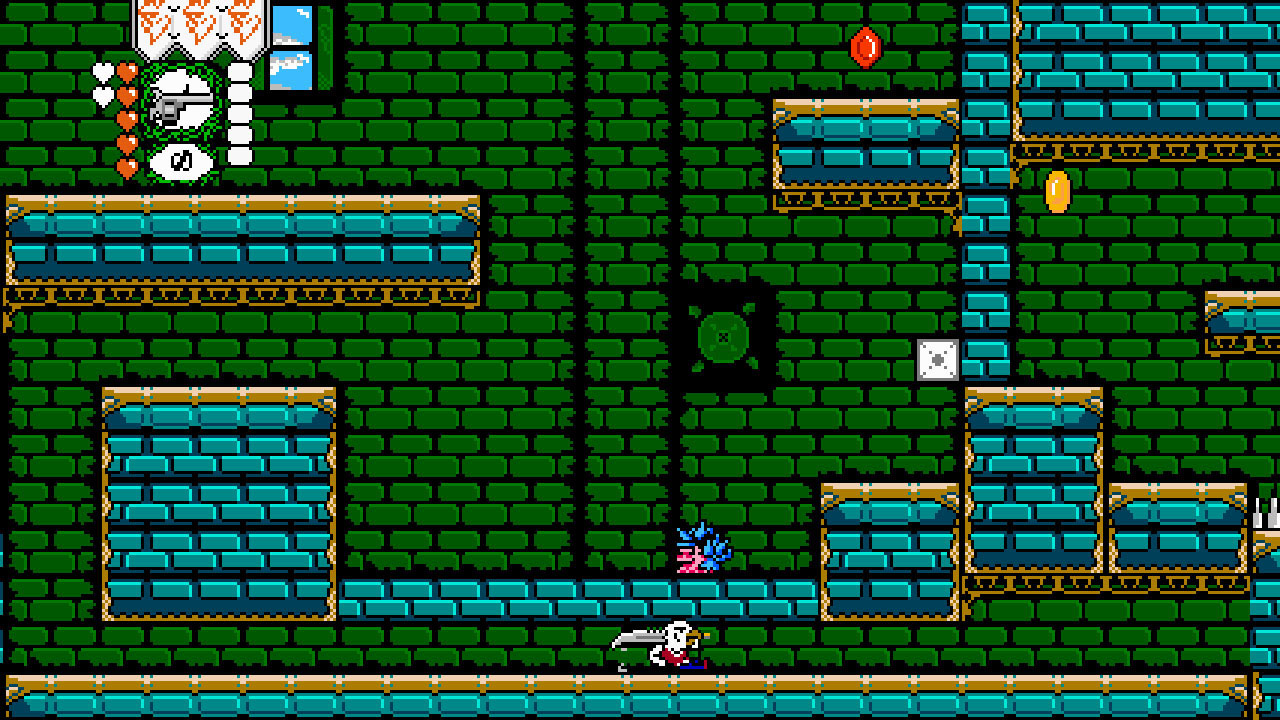 Revenge of the Bird King is light on the RPG elements. Outside of traversing the world map and getting into random encounters in an almost identical-to-Zelda II fashion, there exists an item shop where you can buy various goods and ammo for your special guns. President Eagle can also level up, which will give him either a bonus to damage dealt or increased health. It is hard to tell whether there is an actual experience system at play, because the rate at which you gain levels feels quite sporadic. You often level up after a boss fight, but not always and it can also just happen after defeating random enemies. Some sort experience counter would have been nice for inquiring minds since it would give the player a clear experience goal for their next level. Outside of the light RPG systems and previously mentioned gun upgrades, you may come across a few items through exploration that grant various passive perks to President Eagle, as well.

The actual platforming in Revenge of the Bird King is solid but not without some significant setbacks. Each “level” is short, and as a result there are no checkpoints. There is an expensive, purchasable item that will allow you to respawn where you died however, but we’ll get into why it is terribly flawed later. The main problem is that the pacing of difficulty in most levels is severely backloaded, to the point where you’ll breeze through 90% of the level and repeatedly die on the final 10% until you are familiar with its requirements. 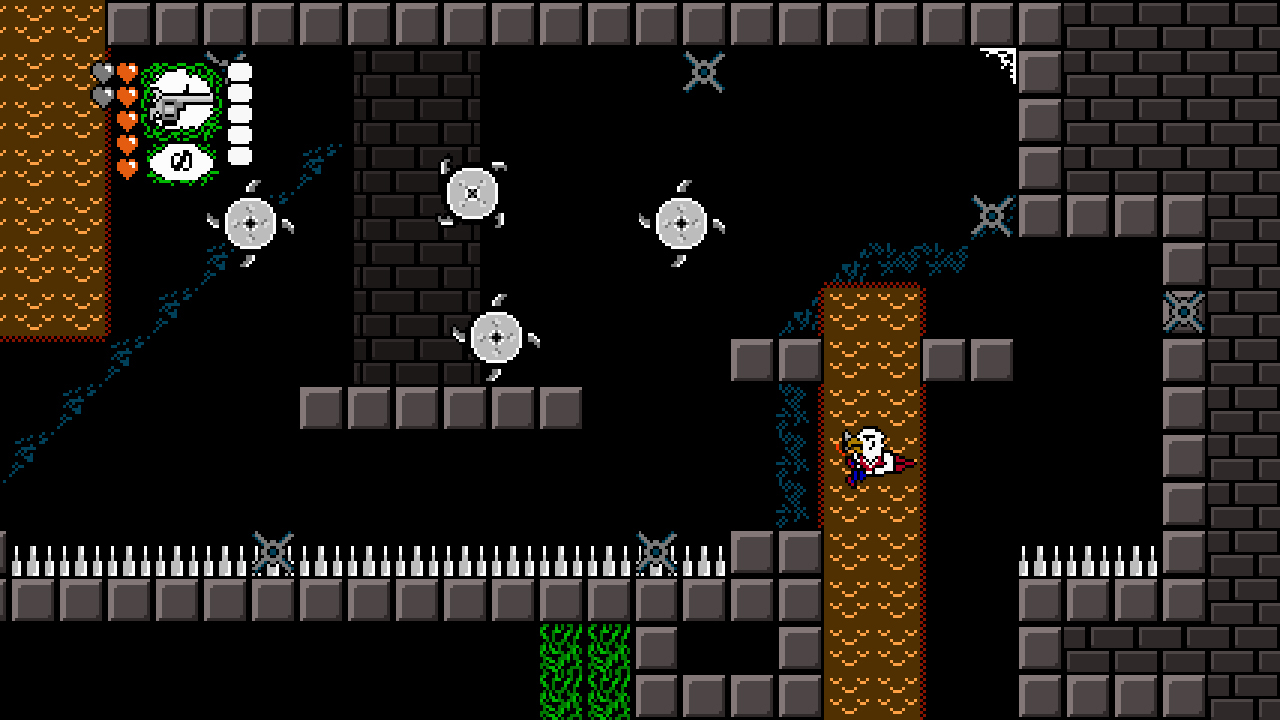 But hey, that’s where the respawn items come into play, right? Unfortunately, you can easily die in an area where those items are a waste, but you won’t realize that until it is too late. Many of the final rooms of levels have moving platforms that are meant to take you to either A) the end of the area or B) another moving platform. But if you get caught in between the two points (and the moving platform’s point of origination is out of your line of sight), you cannot proceed even if you use a respawn item. This is because the area in question requires you to advance by way of a moving platform, but they won’t populate on the screen if you’re out of their origination range. Again, 90% of any level should be cake for most, but the 10% where you could potentially benefit from the occasional respawn item will almost always never work in your favor.

Revenge of the Bird King suffers from occasional bugs and glitches as well. If you accidentally open the menu while advancing to the next screen of a level, the menu will be off center and unreadable until you close out and open it again. That doesn’t affect the game in a massive way, but feels like something that could have been easily fixed in a testing phase. More heinous bugs occur when you (or enemies) get stuck in terrain. It is also possible to be completely frozen upon advancing a screen in a level, leaving you vulnerable to traps and/or enemy attacks until you mash some buttons to free yourself. None of these are definitively game-breaking, but can be frustrating depending on the situation. 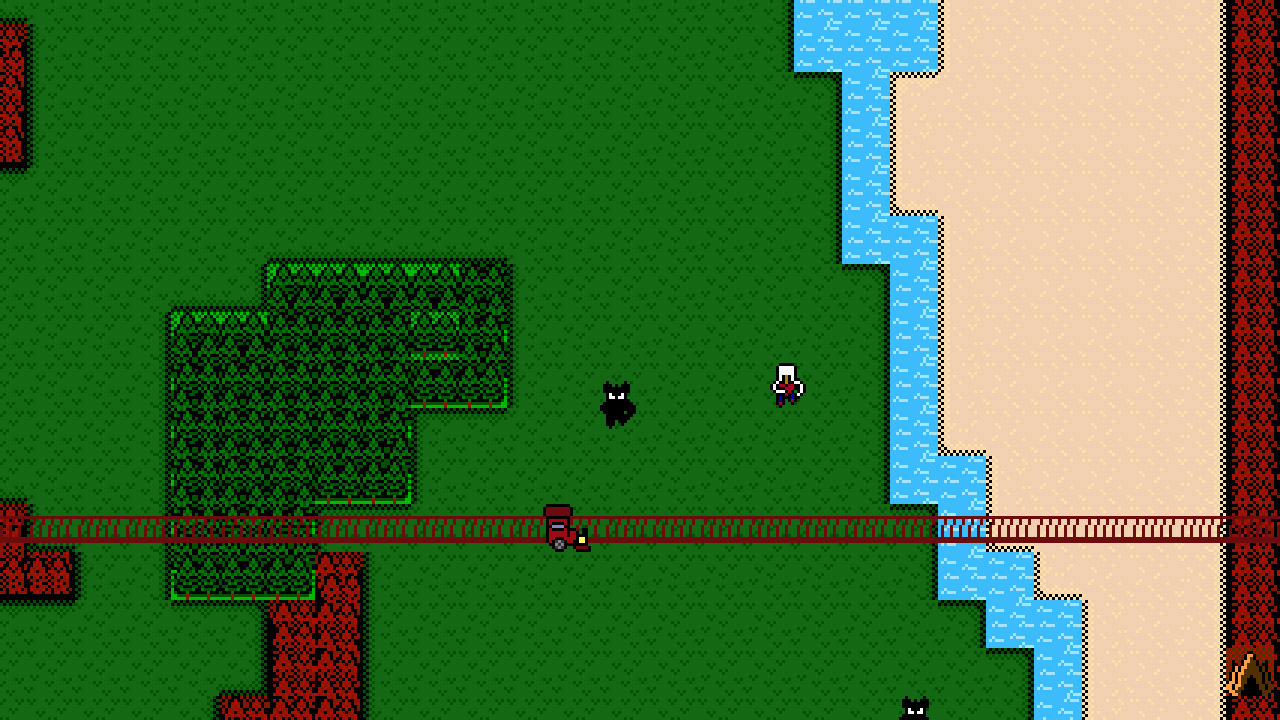 Revenge of the Bird King manages to tug on the heartstrings with its NES inspired graphics and chiptune soundtrack. While the music itself can be a bit forgettable at times, it does a good enough job for what it is and is never a burden to the experience as a whole. The various sprites are varied and colorful, though are certainly not the most outstanding retro-inspired graphics you’ve ever seen. Kudos to those responsible for President Eagle’s design though, because seeing an avian humanoid wielding a gigantic blade and shooting all sorts of firearms is pretty dang great.

Judging a game and its flaws that comes with a measly $4.99USD price tag is tough because you can’t necessarily be blinded by your experiences of more expensive (but more polished) titles. That said, Revenge of the Bird King, at its core, is a decent game for the price. Even though I’m no expert or die-hard fan of the platforming genre, I found the general gameplay loop present to be enjoyable. But the pacing of the levels combined with frequent collision-based glitches certainly soured the experience for me a bit. But, if you live for platforming games or are looking for one with just a touch of RPG flair, throwing five bucks at Revenge of the Bird King would not be a terrible investment.

Tags: Revenge of the Bird King