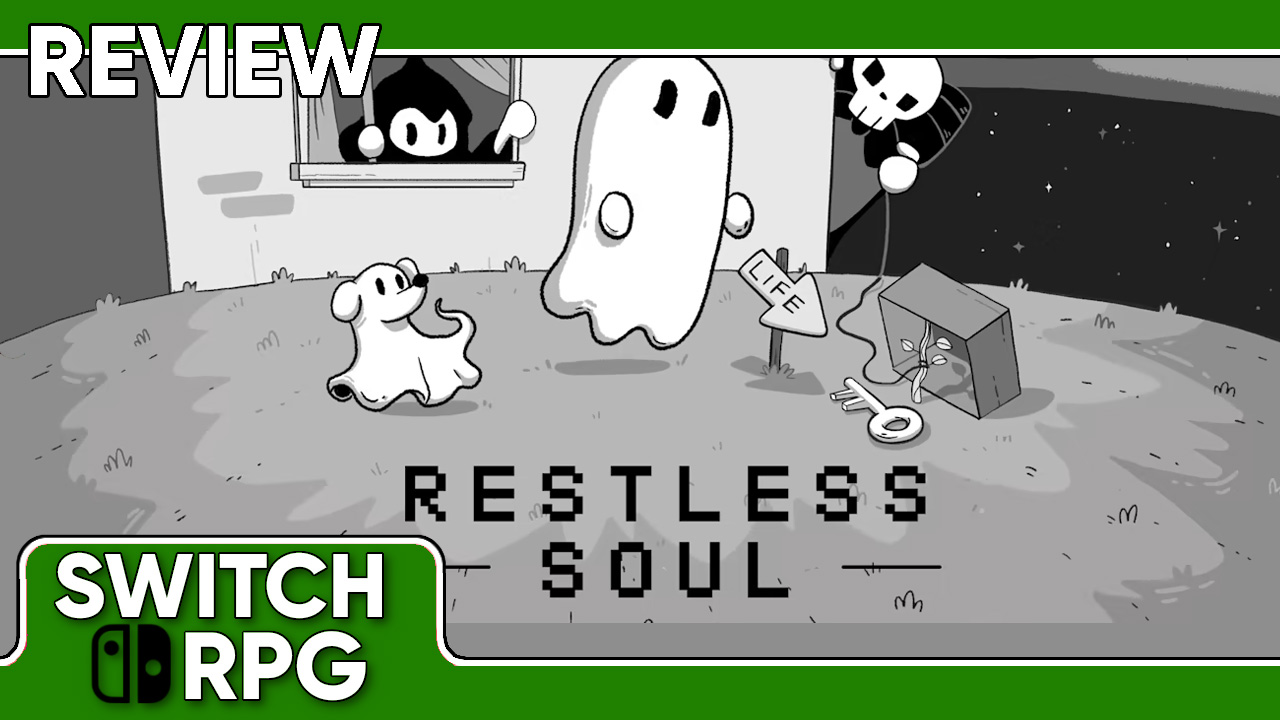 We all have regrets in our lives. Some of them, we can move past from, while others may linger in the back of our minds for the rest of eternity. For those regrets, would they stick with us even in the afterlife? If given the chance to return to life after death to right any wrongs done, would you take it? For a brand new soul in the afterlife, they would do anything to go back to life.

You play as a restless soul who is under the watchful eye of both a narrator and yourself as the player. They have just entered the Afterlife, but right after arriving, they make the bold statement to the Grim Reaper that they wish to go back to life. And that just won’t do, because that would upset Dr. Krull.

Woof, a ghost dog that is hanging around in the office, imparts this knowledge to the player: there is a portal that can take someone back to life, so long as they have the eight keys needed to activate it. It’ll be an arduous journey, but one which the young soul is willing to take. Although they’ll need to be quick about collecting the keys, as Dr. Krull is also looking to collect them to use the Portal. 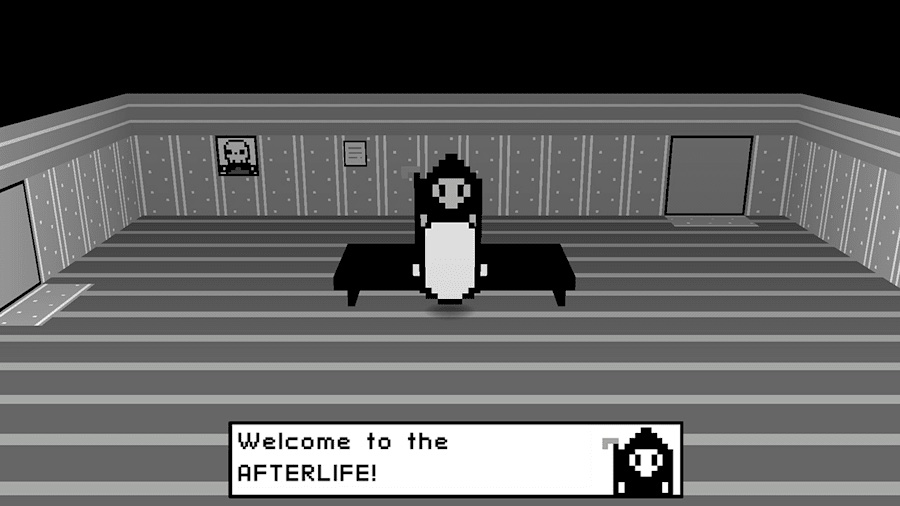 Restless Soul is definitely a lighthearted experience, leaning heavily into its comedic writing. Given its writing style, the comedy may not land for some people. And even if you do like the writing, some jokes do end up falling flat, which is normal in a lot of comedy. But the writing overall is fun to take in and leaves behind a nice experience. The story is pretty straightforward, with only a couple of optional quests available for the player to pursue. It’s built up very well and told in a way that ultimately ends satisfyingly.

Restless Soul is primarily an adventure/bullet hell-lite game where you control a soul and navigate it around the screen. Mixed in with the exploration and combat sections, there are a few puzzle sequences and even a runner sequence at one point. Restless Soul attempts to keep the experience of traveling through the eight towers as interesting as possible and given what it has, it does accomplish that.

When it comes to the combat sequences, the controls are very simple. You have a dash to dodge bullets and a shooting mechanic. The shooting mechanic, however, is a big downside to the combat of Restless Soul. Rather than the shooting being tied to a button and using the right stick to aim, everything is tied to the stick, meaning that you aim and shoot in the direction of wherever the stick is pointing. And while at first, this seems like it would actually work, it ends up being more awkward, especially if you’re trying to dash in the meantime. This also means that there can feel as though there’s some disconnect between where the character is facing and where you’re actually shooting. 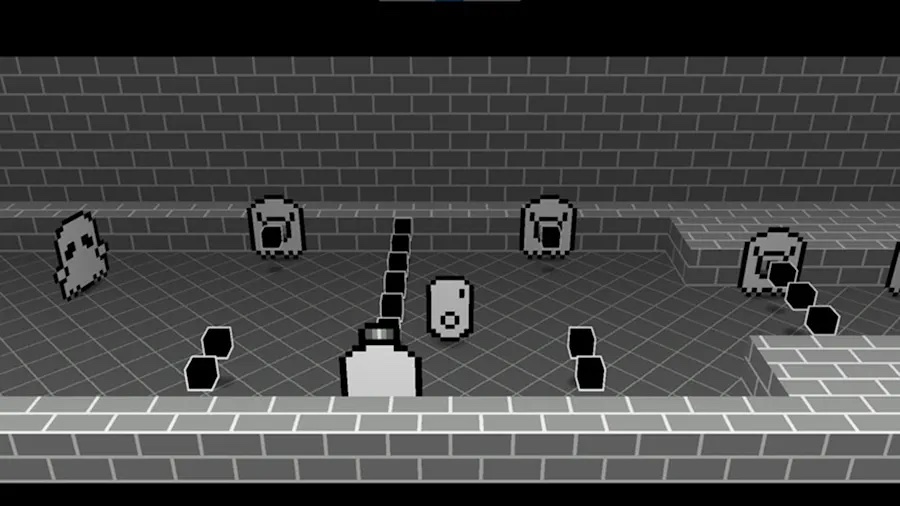 As you traverse the different levels of a tower, you’ll face off against either a single enemy, or a group of enemies. Every enemy type in the game has its own bullet pattern, with some sending out single bullets every few seconds while others send out waves. For the most part, non-boss enemies are simple to battle against. You dodge bullets by moving around, but if just simple movement isn’t enough, your dash makes you invulnerable for a few seconds. 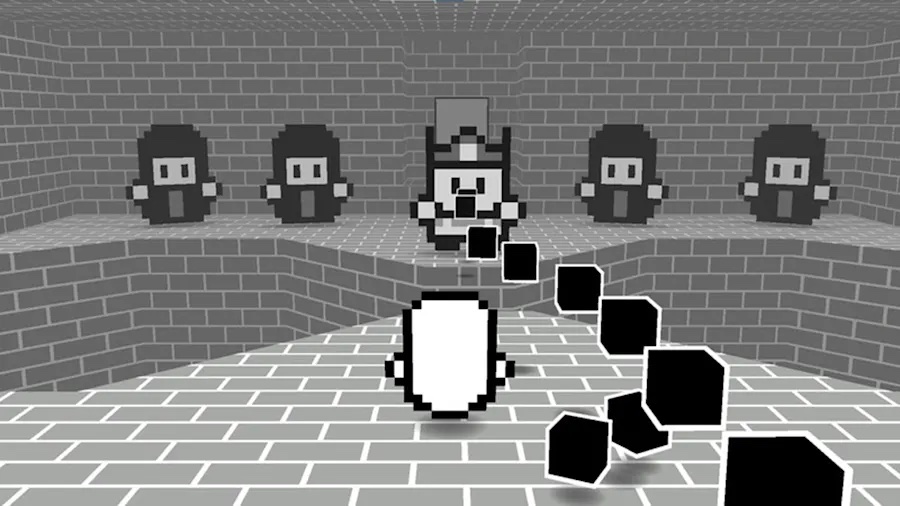 Boss battles are much more difficult than regular battles, in that they have much more variety in their bullet patterns. And as you progress through the game, bosses will start having two phases as opposed to just the singular phase. Each time you get hit, you lose one hit point, with a maximum of five points being your health. You can heal at any point, but for maximum efficiency with your health and potions, it’s best to wait until you have one hit point remaining, as potions fill your health completely. If you happen to die at any point, you will be taken back to the last room you were in before the battle, with your health filled up and your last amount of potions stocked.

Anytime that you’re not in battle, you’ll be exploring around the different towns and cities that you come across. Your main goals are always the towers at the end of the day, but there’s a lot of items and people to interact with as well. If the comedy is up your alley, then there’s no reason not to poke around at everything there is to offer. And Restless Soul does try to get players to explore around as well, with some towns having quests that you’ll need to complete to continue on with the story. 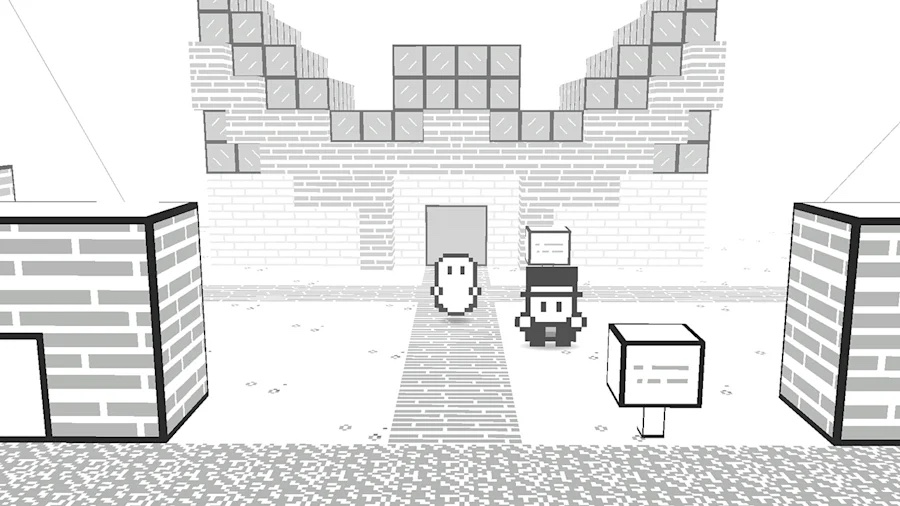 In all parts of the world, there will be hidden rooms that you can stumble across to find hidden collectables, characters, potions, and notes. While these rooms can blend in, there is an easy way to tell if there’s a hidden room if you’re observant enough. If you notice that a select section of tiling looks a bit off, then there’s probably a hidden room there. And along with hidden rooms, there are regularly characters or collectables hidden behind buildings as well. If there’s one thing that Restless Soul does very well, it’s encouraging players to explore an entire map.

Restless Soul makes use of pixel art with its 2D characters and blocky 3D environments. It’s a style that’s not pursued often and, tied with its monochrome palette, it tends to stick out visually from other indie RPGs. It’s a charming visual that suits the writing and atmosphere of the game. Of course, if you’re getting nitpicky, the buildings and signs are just boxes with textures slapped over them. 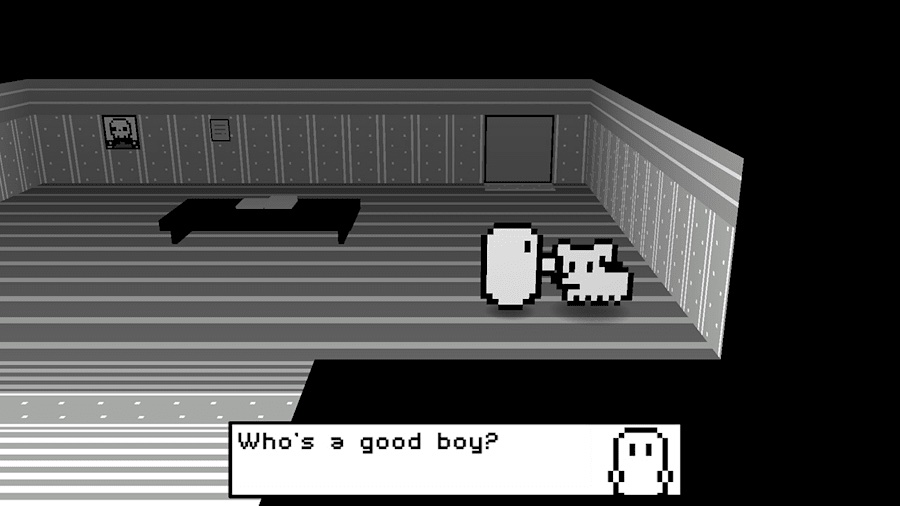 When it comes to the music, it is your standard chiptune soundtrack. However, one of the tracks that really left an impact is the song that plays whenever you first enter a room filled with enemies. It’s a very haunting tune that really makes you stop and want to look around, because you just entered a room you weren’t supposed to. Restless Soul leans into its classic inspirations and comes out of it with a charm that makes you want to keep playing.

Restless Soul is a charming, whimsical tale of a soul who just wants to go back to life after stumbling into the afterlife. It’s a quick experience at less than 10 hours and honestly, you can easily clear through the game in a single day if you’re dedicated to finishing it. The writing takes this game a long way and while there is some frustration to be had with the combat controls, Restless Soul is fun and a treat to play in between some bigger releases.