Regions of Ruin (Vox Games, ported to the Switch by JanduSoft) is described on the Nintendo eshop as a ‘2D side-scrolling RPG with town-building’, and specifically compares itself to ‘Kingdom.’ I actually haven’t played Kingdom, so I cannot really weigh in on any comparison to that game, but to give you my impression of Regions of Ruin, I would say that it’s something that gives me mixed feelings. I’ll elaborate below. 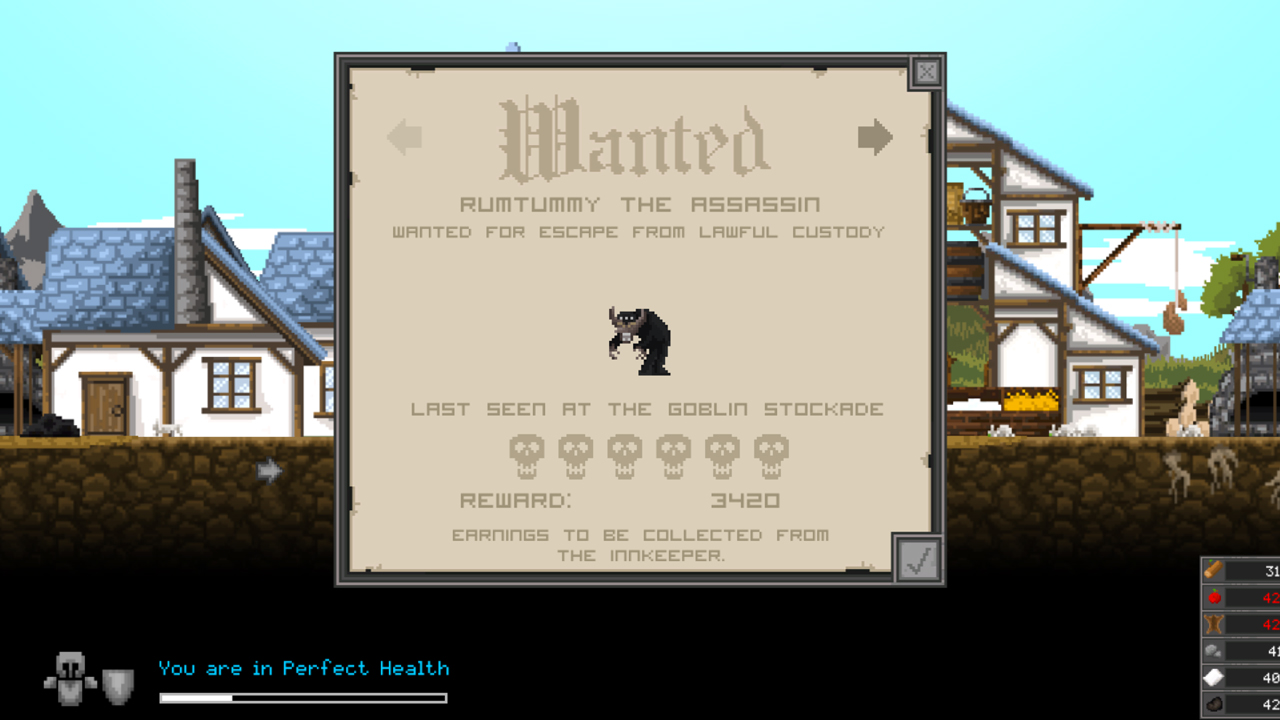 The narrative has you play as a Dwarf attempting to bring your people together in a small community, which you can build up as you progress. While doing this, you must fight foes such as Goblins, rescuing those they have taken prisoner, as well as collecting supplies and equipment to help your little town.

As far as I can tell, that’s mostly all there is to the story. There are moments here and there (little pieces of dialogue) that flesh things out very slightly, like details about how some members of your race detest greenery and want to stay underground- in keeping with their traditional lifestyle (one Dwarf said that the idea of joining my town was ‘blasphemy’)- how Goblins have sworn to actually destroy the entire race of Dwarves, how several Dwarves are highly attached to their history and the runes of their people, etc.

The character material is almost non-existent, and while you are given the option to interact with a large amount of NPCs, they don’t often have interesting things to say in regard to their personality or the story. It’s a shame, as the premise has real potential — a Dwarf trying to create a town and recruit allies while his enemies attempt to commit genocide against his race. Another issue in this area is that even when you do interact via dialogue, I noticed odd language errors on more than one occasion, such as some lines without a period, misspelled words, etc. This isn’t a big deal to me, but it does create the sense of something being a little unrefined. (I can understand this to a degree, though, considering how many characters there are and how much dialogue there is.) Either way, it isn’t a big flaw, and only appears here and there. 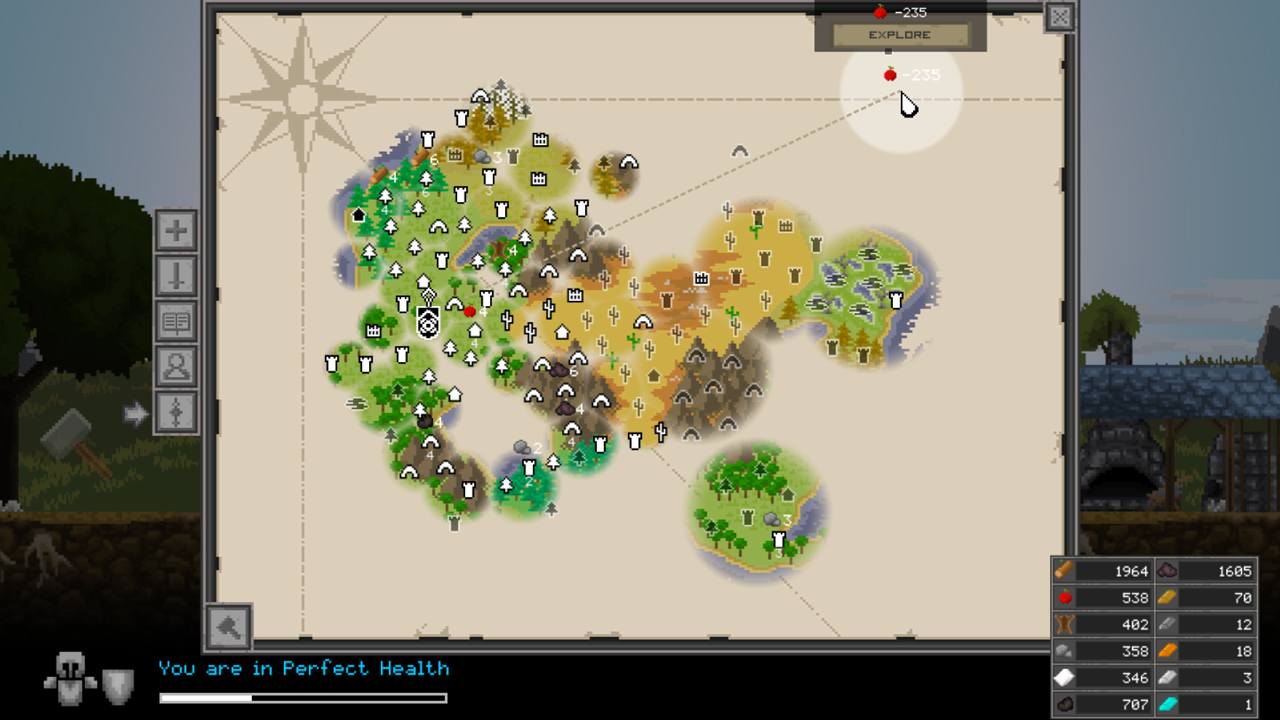 The curious thing is that there are certain moments in the game — again, only here and there — where you see a sudden burst of creativity and wit, as if there is a completely different style suddenly evident. For example: I met a librarian during one of the many areas that I explored, who warned me not to touch his books. Of course, I ignored him, and he promptly killed me. I had faced many enemies and beaten them in dangerous battles, and suddenly I was beaten to a pulp by a librarian.

I also encountered someone attempting modern art with barrels, and- this being my favorite instance- an incredibly polite skeleton-butler trapped in a barn by a farmer. Brilliant. If you’re nice to him and don’t attack him, he even turns up at your town, wandering around, which is a lovely touch. Where did these sudden bursts of creativity come from, considering the rest of the game? I have no clue, but I enjoyed them.

Either way, if you want a game with strong story and character material, this is going to be one to avoid, unfortunately.

The visuals and music are both areas that I found about average. The visuals actually didn’t do a lot for me at first — they, like most of the other elements of the game, feel rather uninspired at first. That being said, I found myself appreciating them more as I played. There are actually certain moments where I paused and had to reconsider my opinion when it came to the visuals: when I stood at a high point while the sun was rising, or when I was in an eerie, swamp-like area with mist. The night sky with stars and the snowy areas were also pretty. There are far better looking games out there, but this is fair enough. The soundtrack gives me a similar feel, actually, but I was less interested in it — I found it competent, but that’s about it.

One thing that may cause an issue for you is that the details in the game tend to be quite small, and I’m unsure if there is any way to actually enlarge text and the like. In terms of my own experience, I preferred to play in handheld mode (I do this nearly all the time with my games) where I could comfortably read everything on the screen. I don’t think it should be a big problem for most, however, but it’s something to keep in mind. 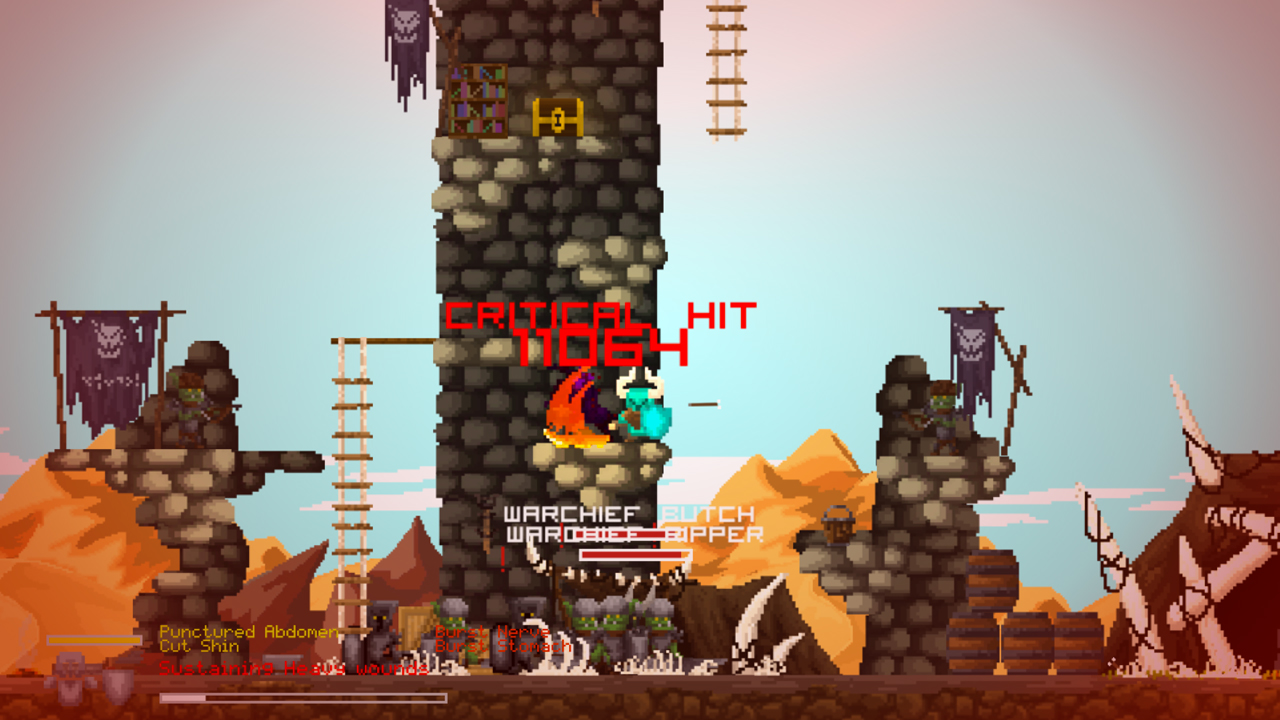 Gameplay is where Regions of Ruin picks up quite a bit. I do feel that the gameplay could be more accessible, as it took me a while to really adjust to it, but it makes for a fairly enjoyable time once you’ve become accustomed. You move using the analog stick, and the ‘X’ button allows you to interact with people and objects. When fighting, you use the ‘Y’ button to use light attacks, and the ‘A’ button for heavy attacks. ‘ZR’ lets you throw weapons at your enemies, and ‘ZL’ allows you to guard yourself with a shield, although the enemies’ power attacks can break this defense, and shields can also break due to constant battering over time, but you can always repair them.

If you hit an enemies shield with the ‘Y’ attack while they are guarding, you will be stunned for a moment. There is the important dash move (‘R’ button) that allows you to move much more quickly. There is also a button for sneaking (‘L’), which I didn’t get much use out of, but it can help you to creep behind enemies and hit them particularly hard. If you take too severe a beating, you will accumulate ‘wounds.’ Listed on the screen, these wounds will keep you from getting to 100% health until you get them healed. There is also a skill tree (divided into areas like attacking, defense, etc) where you can select which areas you wish to invest points. 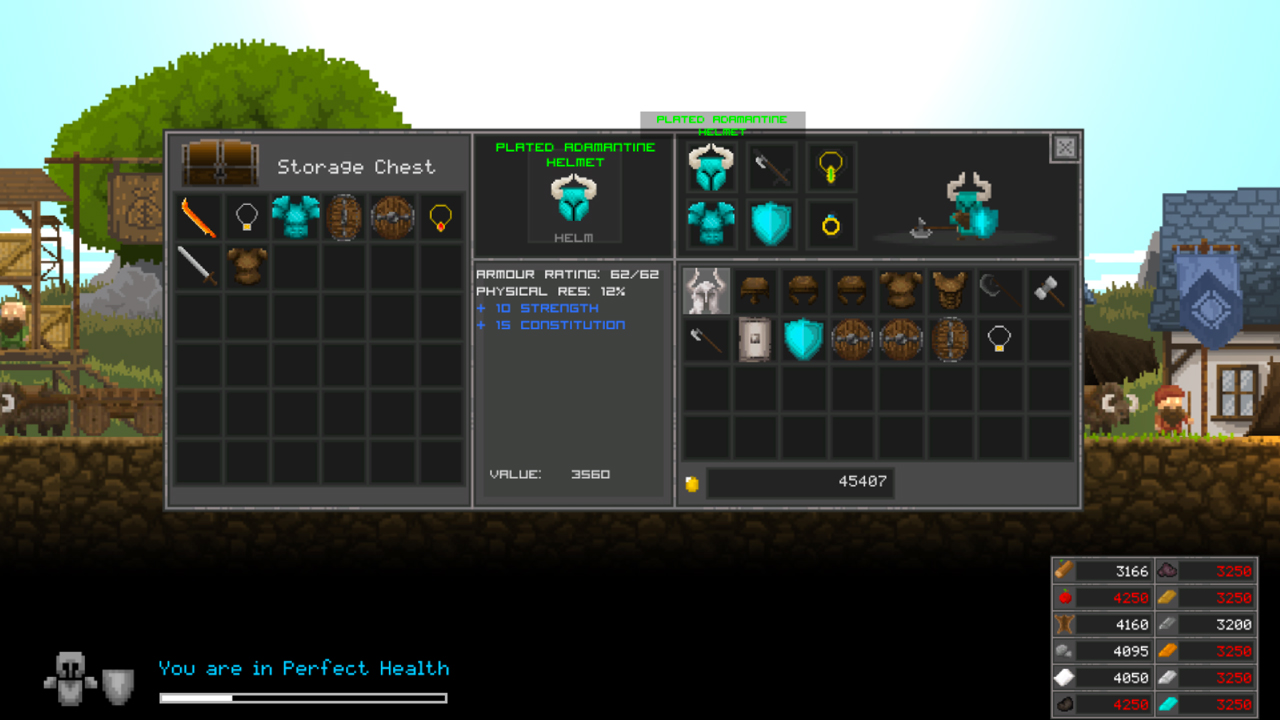 Food is vital in this game. You need food to explore the map, and once you unlock areas with this exploring, you’ll require food again to travel to the places that you have discovered. You usually get food from either killing animals or looting supplies. There are other resources to collect that will help you once you return to your town to construct or upgrade things, which I found to be one of the more enjoyable activities in the game. You can build structures, such as a market or a library, which perform functions such as earning you money, or allowing you to upgrade your items.

The world around you also feels genuinely big, with a really large variety of places to visit. If you’re a fan of longer games, you will get a fair amount of time out of Regions of Ruin. Sometimes you can stumble upon places known as ‘siege’ events, where you must face down waves of enemies with some allies until you have cleared the area. You cannot actually leave the siege area unless you win, which seems a bit too demanding, from my perspective- at one point, I feared that I would be stuck due to this. I’ve tried looking online for information on if I’m mistaken about this regulation, but I haven’t been able to find anything.

Adjusting the difficulty of the game as a whole in the settings isn’t very clear. The modes are named after races (like Elvish, etc) but there is no description of what level they correspond to. I assumed that it would be the highest difficulty at the top, lowest at the bottom, but it seems like it’s actually the opposite. It can also be annoying to open treasure chests when you’re somewhere high, as the contents always spill out, meaning that they will likely fall below you. 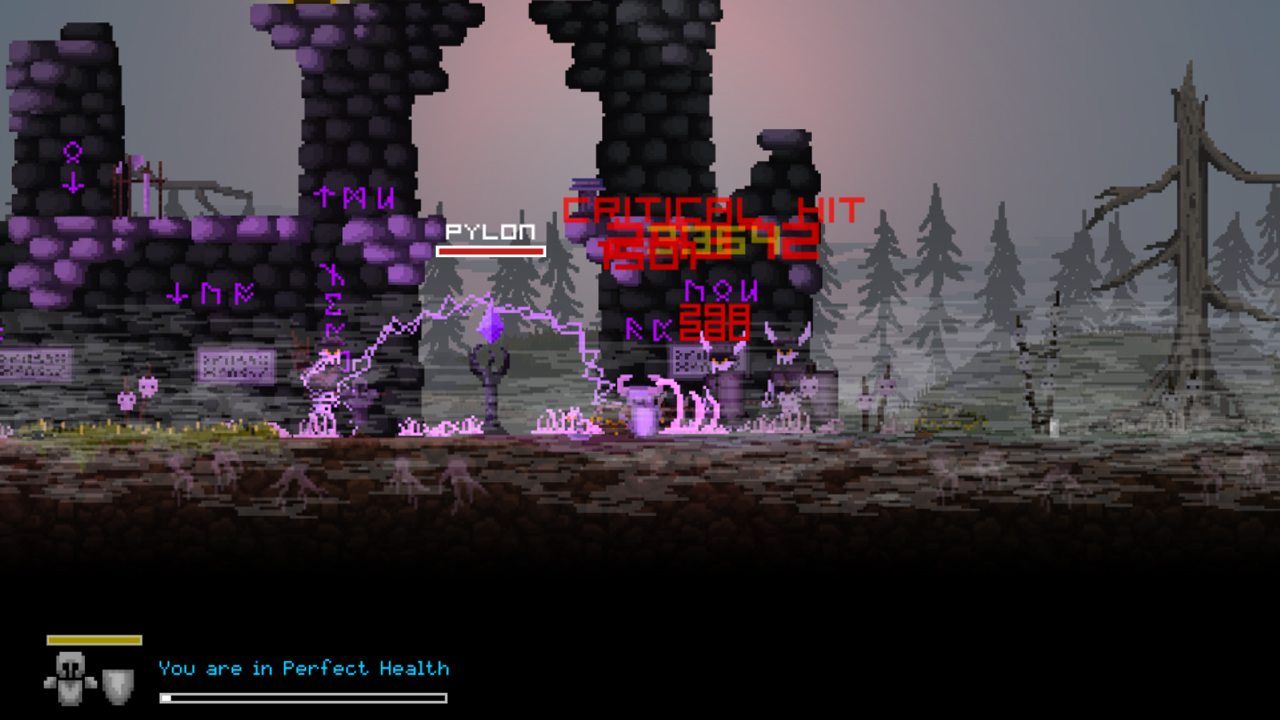 I encountered some small bugs while playing version 1.1.83, with the most serious issue being wiped save slots, which occurred when I tried to overwrite one save with another. I ended up relying on the autosave feature instead. This is the only major bug I encountered, however, and I would hope that it’s patched up by the time the game actually releases.

Earlier, I said that I had mixed feelings on the game as a whole. Some elements worked for me, while others left me a confused and conflicted. I wouldn’t say that I was impressed with the visuals, music or story in this game. That being said, I enjoyed playing it- up until I accidentally lost my save slot- and I think that’s a worthwhile point to make. Regions of Ruin is not perfect and it could do with reworking, but there are some honestly fun moments, and the game has a multitude of elements that will keep you playing. I invested quite a few hours into this, and I still don’t feel bored with it. All in all, Regions of Ruin is worth a look if you like the sound of the gameplay and if you’re interested in finding something that you can spend a lot of time with- just be mindful of the aforementioned elements.

can you tell me if the DLC Regions of Ruin:Sieges is out for SWITCH and PS4 ? please let me know