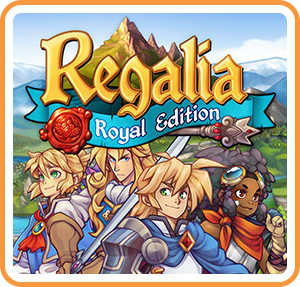 Ever start a project and feel like you might be in over your head? Maybe you tried to assemble the Taj Mahal Lego set or erect an eight-drawer dresser from IKEA. Regalia is very much in that same vein, as you are tasked with rebuilding your ancestral kingdom while trying to repay the debt of your forefathers. In this tactical RPG, you play as Kay, a young protagonist who learns that he is the sole heir to Ascalia at, unfortunately, his father’s deathbed. This once glorious land was the gem of the whole kingdom, however, you discover it is now in ruins with nothing more than cobwebs filling its passages.

Upon arrival, Kay is tasked to rebuild Ascalia and attract subjects to reconstruct this barren land. Before he can start to forge his legacy as ruler of Ascalia, he learns of a costly detail from the past. Your ancestors accumulated an enormous debt, and if you were to neglect repayment, swift justice along with an end game screen would follow.

Gameplay revolves around a calendar in which you are given a timetable to complete your tasks. Certain days of the week will reveal various jobs you can pursue during any given day. Missions range from clearing dungeons with party members, constructing/upgrading new buildings for specialized characters, growing personal bonds with town folk, and, of course, fishing. Completing these tasks will unlock side quests and also introduce new characters.

One of the strongest aspects of the game is the diversity of characters. Voice lines, abilities, and backstories are all a focus in Regalia. In fact, there is no shortage of quick wit or bad puns between character interaction to keep you entertained. You will learn more about each character as you spend time with them throughout the course of your reign. Progressing these bonds will, in turn, increase their usefulness in town or combat.

At the world map, you will select a dungeon consisting of three components: combat, branching dialog encounters, and a camp. Combat takes place on a traditional tactical grid with a predetermined win condition. Each party member has unique special abilities which require 2 AP points to perform, and are naturally replenished at the end of each turn. You also have the option of attacking multiple times by using AP. Be careful though, as more unique abilities have associated cooldowns, so keep that in mind. The combat system is completely customizable to create an experience as challenging or painless as you would like. Selecting the easiest game setting from the start of a new game will let you skip battles altogether if you desire. After a battle is over, you will be able to revive fallen members at camp, though this can only be done once per section of content. Branching dialog encounters are also in dungeons where your choices will determine what reward you receive. As I played, I was thankful to be able to determine damage taken and received in battles as battle repetitiveness is prevalent.

There are parts of the technical side in the game which, sadly, tone back immersion and quality of life for me. The largest of them being the number of loading screens in the game. A sizable loading screen interjects itself in each room, building, dungeon and, occasionally, even storyline sections, ruining any sense of immersion. Also lacking is a reliable autosave feature, which would not be a large concern if it weren’t for the few game crashes I experienced. I do not see them releasing a patch in the future as the game has been out on the Switch for some time. At the time of writing this review, the current patch is 1.0.2.

Regalia is a melting pot of RPG elements, creating a unique experience for a tactical RPG. Its strength in character and story made the game a joy to play, and the teams involved developed a wonderful stage for the story to unfold. Even though a few technical aspects missed the mark, I would not let this deter you if you are looking for a decent tactical RPG, or are simply trying to get out of constructing IKEA furniture.