Quest of Dungeons was one of the earliest rogue-likes to grace the Nintendo Switch, making its debut on the platform back in September of 2017. I was an early adopter, and remember enjoying it immensely, however I shelved it in favor of other titles and, eventually, forgot about it until this past weekend. Today, I’m looking to redeem myself by bringing forth some details on this budget-level rogue-like that, surprisingly, is still among my favorites on the platform to date. 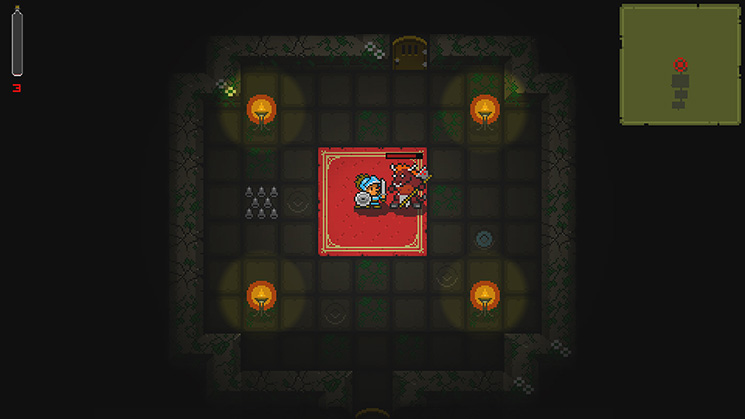 The premise of Quest of Dungeons is something that can somewhat serve as a reminder to your more innocent, adventure-filled, youthful years. Remember “back in the day” when you and your friends would get the idea to journey into the unknown? For me – as a child – it meant the vast woods around my subdivision, beckoning us to explore its depths every day. There were times, however, when certain people – including myself – would reach their limit and not want to go further (in fear). Thus, only the bravest would fully venture out while the rest remained on the sidelines. That is basically what happens in Quest of Dungeons – what starts off as a tale of four bros ultimately ends in only one dude doing something.

Vile beings and evil lords are dead set on capturing the light of the world, storing it deep within the labyrinths of their keep. Standing for the just, four heroes set out together in hopes of vanquishing the evil, and returning the light from whence it came. No, this is not a sequel to Boy Band (Final Fantasy) XV – in fact, far from it. Your buddies wuss out at the last minute, leaving you – the player – to take on the daunting task alone. Will you survive? Probably not, but that is a rogue-like for you.

Quest of Dungeons never takes itself too seriously. You can tell almost immediately that the developers opted for comedy over a more serious tone. Your bros are more than happy to sit idly by while you brave the ever-changing dungeons, even going as far as to suggest that you will surely die. Within these dungeons, a merchant that occasionally speaks like the one found in Resident Evil 4 will provide “strangers” with goodies – for a price. Enemies you encounter will also frequently taunt you in a sarcastic manner. Look, we all know the situation at hand is dire, but why not have some fun with it? As-is, the comedic relief really improves the overall experience rather than feel over-the-top or being a distraction. 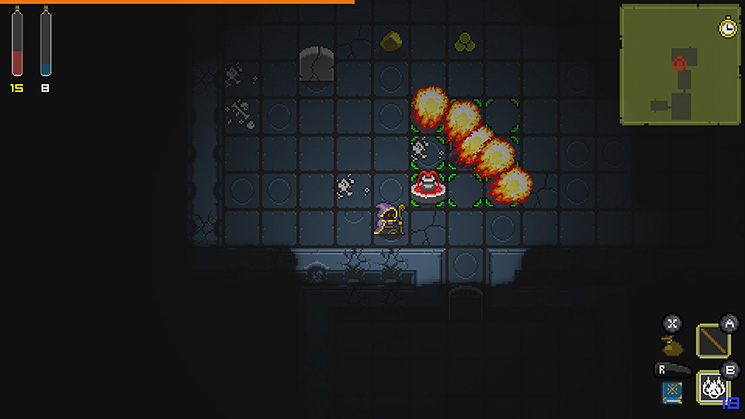 Quest of Dungeons is a turn-based rogue-like thats general gameplay loop is standard genre fare, with a couple exceptions (discussed later). You’ll prance around procedurally generated rooms, unearthing shinies, destroying objects, and combating enemies along the way. Corridor funneling – a standard rogue-like tactic – is practical in most situations, though may not be ideal when confronting enemies capable of ranged attacks. Enemies, and objects, can cough up all sorts of loot when defeated/destroyed, which can then be reserved for later use, equipped to your character, or sold to the mysterious merchant for some dough – if you can find them! Making it to the end of a set of dungeons will unlock the next set in sequence. You also get access to a very basic “dungeon creator” through your final unlock, allowing you to choose the size of your dungeon, as well as how many floors are found within it. Should you die – and you will – everything but your unlocked stages will be lost. I suppose THAT could be considered a rogue-lite feature, but we’ve made it this far under the rogue-like banner so I’m sticking with it!

Quest of Dungeons utilizes randomly generated weapons and armor, but in a rather fair way. You will come across some items with little to no use to your chosen character, sure, but you’ll get actual upgrades far more often than the that. Obsolete gear does have an important function as selling them provides extra “fundage” for your favorite stranger merchant. Gear can spawn with some unique modifiers – some of which are quite powerful – but occur rather infrequently as to attach a real sense of joy to their discovery. The gear treadmill in Quest of Dungeons is constant and balanced exceptionally well, adding an engaging form of secondary progression alongside the standard level up system.

Heroes that wish to challenge the Quest of Dungeons can select from one of five classes: Warrior, Wizard, Assassin, Shaman, and Necrodancer, with the latter becoming an option only after defeating the first set of dungeons. The Warrior and Wizard play about how you would expect – the former a melee master while the latter dominates at range – but the Assassin and Shaman may perform a bit differently than you’d expect. The assassin is more or less the hunter/archer archetype, but does have a few tricks up its sleeve to deal with foes in melee range. The Shaman – my personal favorite – is kind of like a battle-mage, capable of dealing decent damage up close while having access to a variety of damage dealing and crowd control abilities from afar. At the time of this writing, I have not tried out the Necrodancer therefore I cannot offer any explanation on its mechanics. 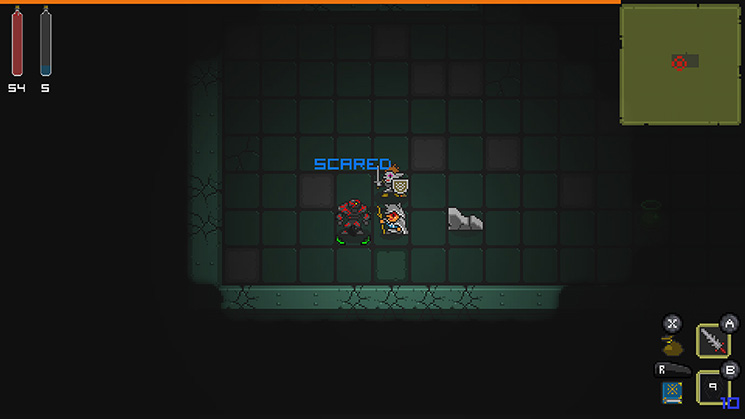 Each of these classes have their pros and cons, but I’ve found the Shaman to be much easier to play than the other ones. Perhaps this boils down to taste alone, but it could also be that class balance is not the best here. Certainly there are multiple ways to go about your business, but I found the Shaman’s Fear spell to be invaluable during my dungeon romps. As a change of pace, I’m currently playing through with an Assassin, which can be a bit tricky in the early portion of the run, and only time will tell if it can hold a candle to that of my beloved Shaman.

Heroes start out with a single spell, with more unlocking as you discover (and use) skill books. The cost of using skills depends on the skill itself and your current class, but all combinations result in at least some form of cooldown that incurs upon its use. After a certain number of steps (or turns), you can use that skill once more provided you have the necessary mana on top of that (again, depending on the character/skill). Each spell is unique and useful in at least one situation, with a few of those being useful universally. 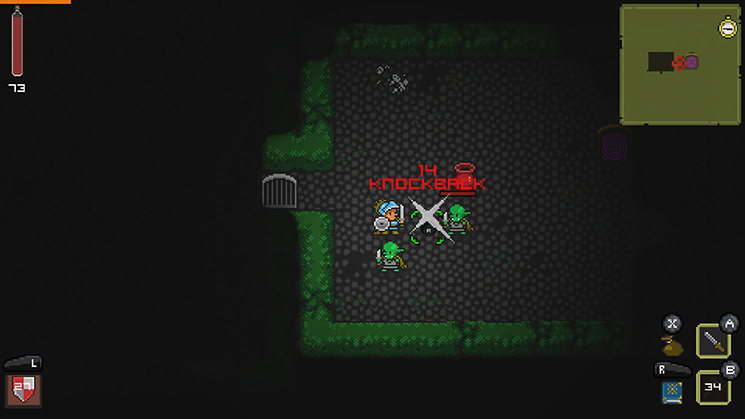 Quest of Dungeons would not be complete without some quests, right? Quests are handled in a rather simple fashion, are easy to fulfill, and reward the player handsomely for their effort. Touching quest orbs that randomly appear on floors will generate an optional quest for you to tackle, and you are allowed to take up as many of them at a time as you’d like. Quests are comprised of two variations: boss kill and item search. In general, a quest will prompt you to either kill an elite enemy or find a certain item, and will also provide you a general idea as to where these things can be found on the current floor. Item quests are incredibly easy, and should always be completed if you can help it. Kill quests, however, can be a bit risky if you’re just starting out and/or are low on health and restorative items/skills. Neither type takes that long to complete though, so be sure to use the quest system as you can for optimal EXP and monetary gains. Who doesn’t like gains?

The previously mentioned merchant usually spawns on each floor, but not always. Luckily, you have the ability to re-visit previous floors in case you come across a stroke of bad luck. The usefulness of backtracking extends further than that though, since some chests and doors require certain keys you may not have upon their discovery. You can safely travel elsewhere if you come across blocked passages and chests, knowing full well that you can return to them once you have the proper tools in hand.

Collectively, all of these components make up a rogue-like experience that is familiar while also offering something a bit refreshing. Additionally, Quest of Dungeons is very newbie-friendly due to its rather fair gameplay loop in comparison to the average rogue-like that can be brutally punishing at every turn. That said, I did play on the Normal difficulty level and there is one difficulty lower and two higher than that for those looking for less (or more) of a challenge. 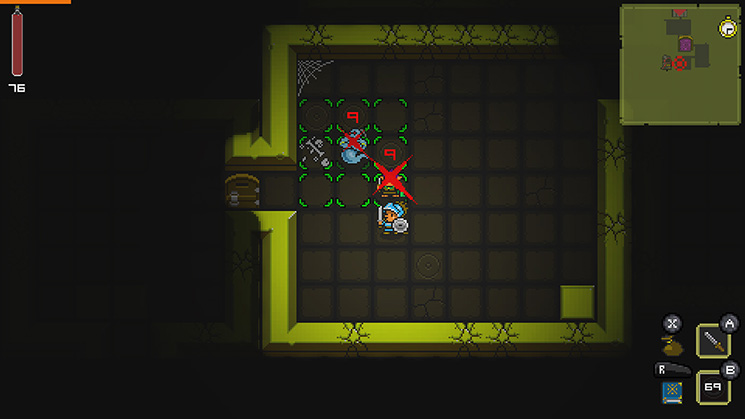 Realistically, the aesthetics found in Quest of Dungeons will not appeal to everyone. Animations are limited, and the design itself is likely to be considered primitive. It isn’t that attractive, but I was drawn to it because it hearkens back to those simpler times of playing Castle of the Winds back in computer class in middle school – your mileage will vary though.

My biggest complaint with the graphics boils down to a mechanical/design choice rather than the fact that they’re simplistic. In short, some rooms are a little too large for my liking, but that is a minor gripe at best. The soundtrack in Quest of Dungeons isn’t all that amazing either, rotating between three or so tracks as you dive deeper into the dungeons. None of the pieces are BAD, but you won’t be sitting there humming them after the fact either.

Quest of Dungeons might be one of the oldest rogue-likes on Switch, but it is easily one of the most entertaining for the price. Although visually simplistic, it houses some interesting and engaging mechanics that are sure to keep you entertained for hours on end. It isn’t the most unique rogue-like experience out there, but there are enough additions – albeit subtle ones – that should suit all types of players.