Polandball: Can Into Space Review (Switch) 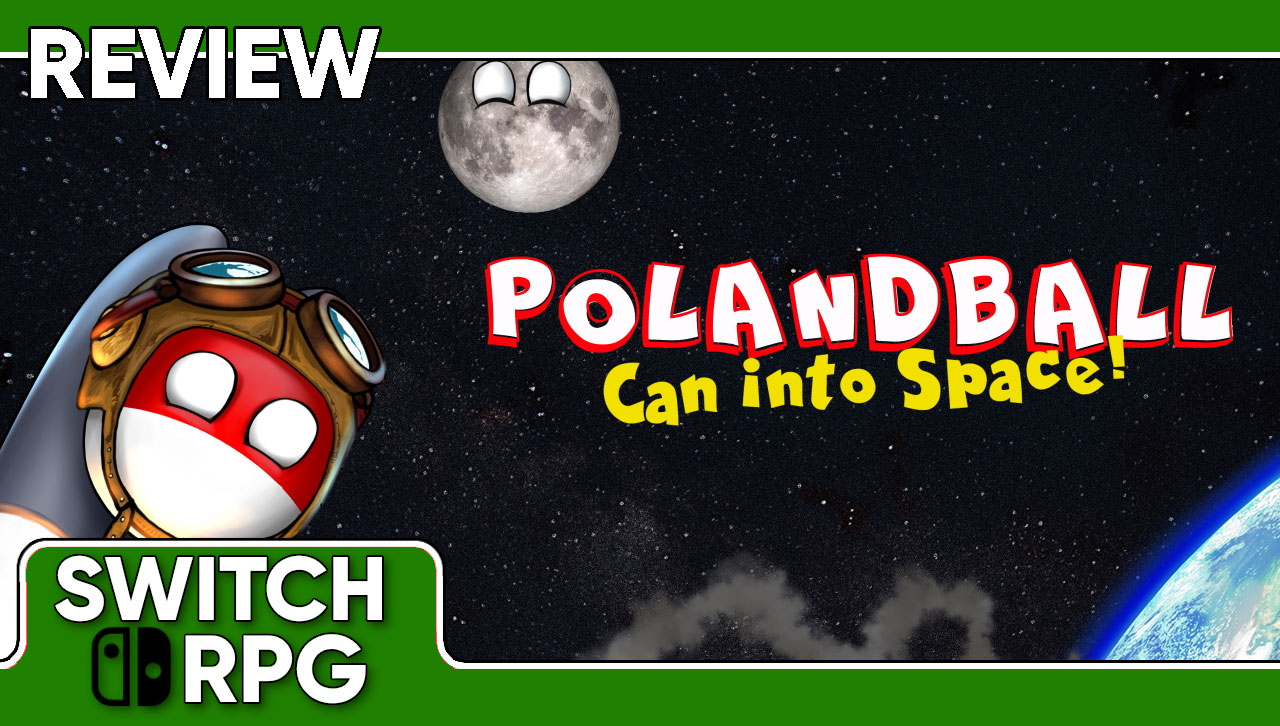 Polandball: Can Into Space (referred to as simply “Polandball” here on out) is a silly, entertaining rocket simulator based on the online phenomenon of Polandball/Countryball memes. If you have played Kerbal Space Program, or any other space sim before… well, this game is not like that. Sure, it does have space stuff—rockets, gravitational slingshots, and the ultimate goal being a moon landing— but it also has vampires, potatoes, and comedic memes in abundance. Cartoon chat bubbles popup revealing the pilot’s hopes and frustrations, and a soup ladle serves as a rocket cone. The playstyle is engaging and addictive, so while a far cry from Kerbal, it is an incredibly fun way to spend time rocketing around the stratosphere. 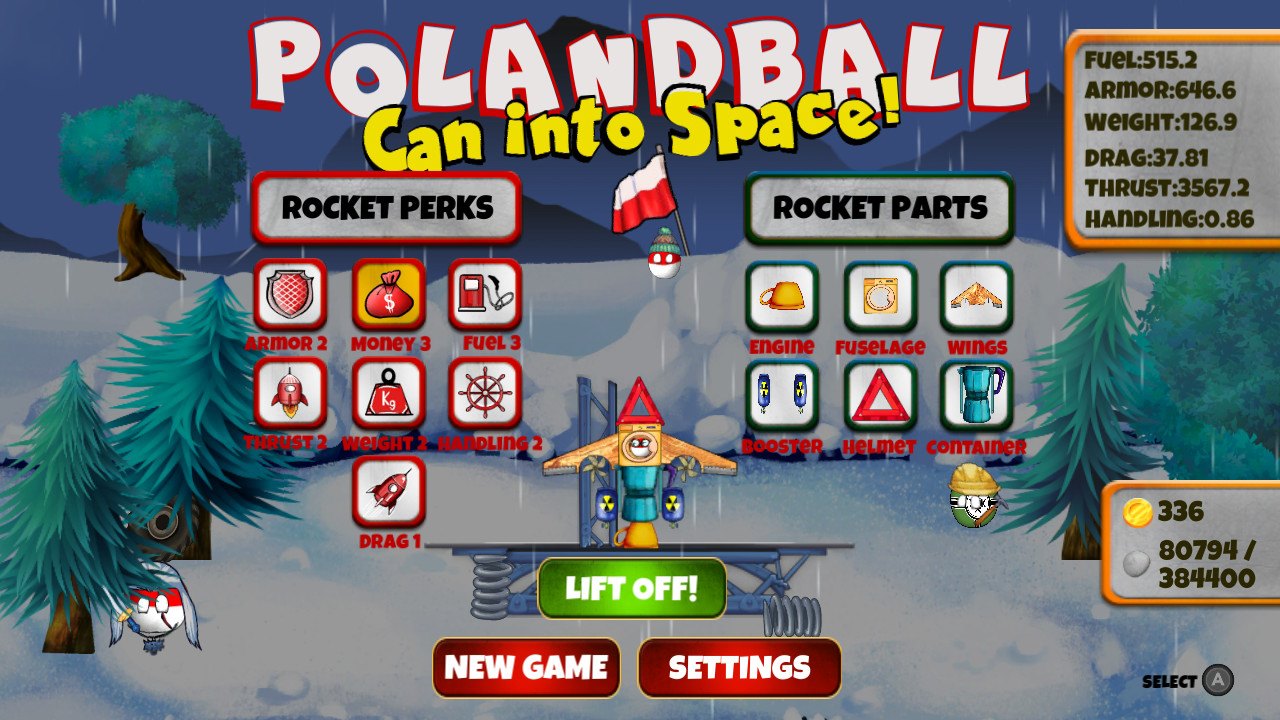 The main objective of the game is to help Polandball make it to the moon. You start with a simple rocket made of six customizable parts: engine, fuselage, wings, booster pack, helmet, and container. You also have seven different perks to be leveled up for further customization: armor, fuel supply, coin acquisition, thrust, weight, handling, and drag. With each flight attempt, you find coins, fuel, hamburgers (health), and occasionally magnets to help attract the other collectibles.

The coins are used at your base in order to buy the new parts and perks, and since they are the only collectibles to survive each failed flight, they quickly become the primary focus of the game. Sure, getting to the moon is important, but without coins, poor little Polandball won’t make it past the first checkpoint. This gives the game a bit of a roguelite feel. Each attempt features a different sky, with different clouds, different collectibles, and different “enemy” Countryballs. Also in the roguelite vein, each attempt ends in death. Run out of gas? Boom. Smack into Chinaball? Boom. Spin 180° at first launch to get a better look at the pine trees? Boom.

There’s no smooth sailing for Polandball. The other Countryballs want him grounded, and either passively or voraciously seek to keep him out of their overly crowded sky. Luckily, the controls allow for limited dodge capability. Left and Right on the Joy Con rotate the rocket, pivoting and adjusting its angle of ascent, and ZL applies the brakes, slowing the rocket to an improbable standstill. This wastes a lot of fuel, as anything other than straight up prevents progress, but is mandatory to avoid air traffic as well as scoring out-of-the-way loot. The rocket’s boosters are also great for dodging incoming Countryballs, but again, burn fuel faster than standard engine use.

Upgrading armor and eating hamburgers is a better way to cope with jealous Countryballs. A few,such as Jamaicaball and Italyball, are good Samaritans, offering a helpful short-term boost to propel you onward. Germanyball even gives coins if you smack into him- remorse for past transgressions, or just very rich? But in general, the Countryballs are out to prevent your success, and each of the twenty-something Balls has their own way to do it. Swissball steals coins. Romaniaball steals health. Canadaball steals… gravity? And more! Collect them all! Better yet, don’t.

The game is certainly harder than it looks. If you’re okay with grinding, you can max out all the perks and get all the upgrades. But even then, getting to the moon will require some luck, strategy, and many, many trials. In the end, upgrading wings (handling) and boosters prove of little importance to the ultimate goal, whereas increasing fuel supply and armor helped to muscle through to the credit scene (free tip, by the way). Progress is measured by kilometers and checkpoints, although neither really count for anything. Polandball never begins at a checkpoint, always at the launch platform, a few coins wealthier, and hopefully more determined. No matter where you are in your progress, make sure to use your radar! (That’s another free tip.) 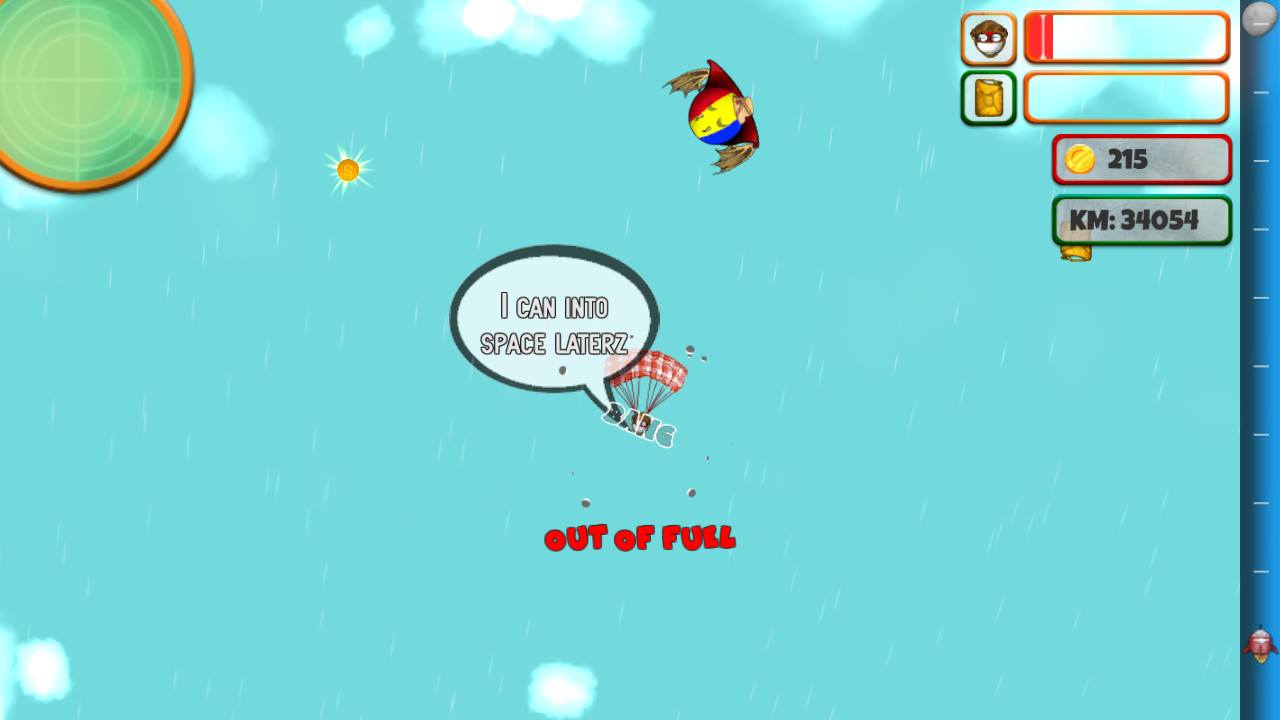 The Polandball/Countryball memes have been popular on the internet since 2009. They are steeped in commentary on current affairs, history, and pretty much always poke fun at national stereotypes. For example, poor Polandball is always portrayed with his flag’s colors upside down, suggesting the country is still backwards and barely functioning. Brazilball looks like a soccer ball. Japanball wields a katana. Each of the Countryballs have jokes— whether subtle or not— levied at them, and Alien Pixel Studios, a small Romanian independent team, captured these in-game, even making their own Romaniaball a vampiric, bat-like creep.

The original online Polandball comic arc ended with a sad, earthbound Polandball lamenting “Poland cannot into space,” despite other Countryballs being able to escape earth and its destruction by a giant meteor. In the game, however, Polandball is more than a bullied wannabe: he is a hero! He has tenacity! He has unlimited rockets! Polandball will make it into space against all odds and despite all the naysayers!

Just to be clear, Poland is not a backwards country and possesses a highly active space program, POLSA. While not possessing the capability for manned spaceflight (only two countries in the world have this), Poland does partner with other countries and had astronauts selected for orbital flights as early as 1978. But it’s rather fun when playing Polandball to see yourself as a backwards, country bumpkin, duct-taping grandma’s curtains to a washing machine in order to reach the moon. It evokes a rebel, fighting spirit, making the objective less about earning coins and space travel, and more about being the underdog and showing up your rivals. Because of this, the victory is that much sweeter and the end game movie that much more satisfying when you finally reach the moon. 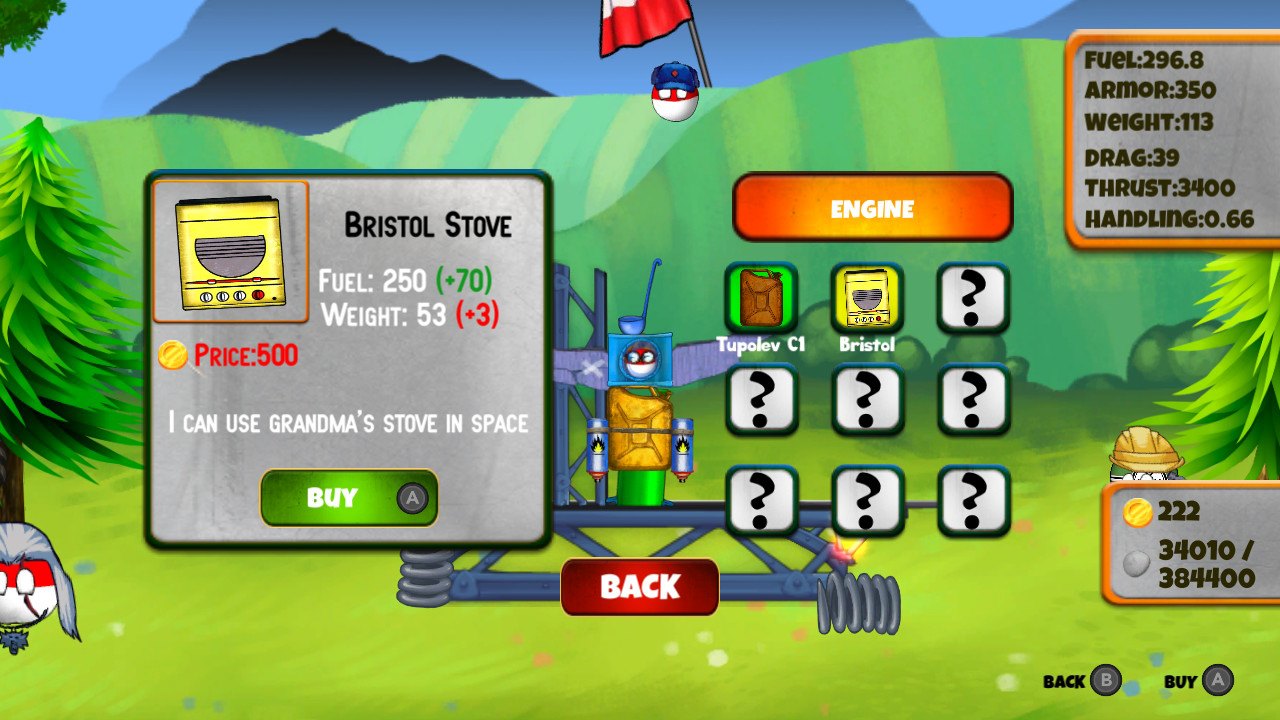 Visually speaking, this game is much cleaner and brighter than the online comics and memes. The UI and menus are simple and designed to get you flying instantly. The upgradeable rocket pieces are cute and funny, such as a plunger for a helmet or a coffeemaker for an engine, and the few speech bubbles that pop up are humorous. What immediately sold me on this game, however, was the music, which in combination with the sound effects manage to be very catchy and fun, and play a large part in enhancing the enjoyment of the game. 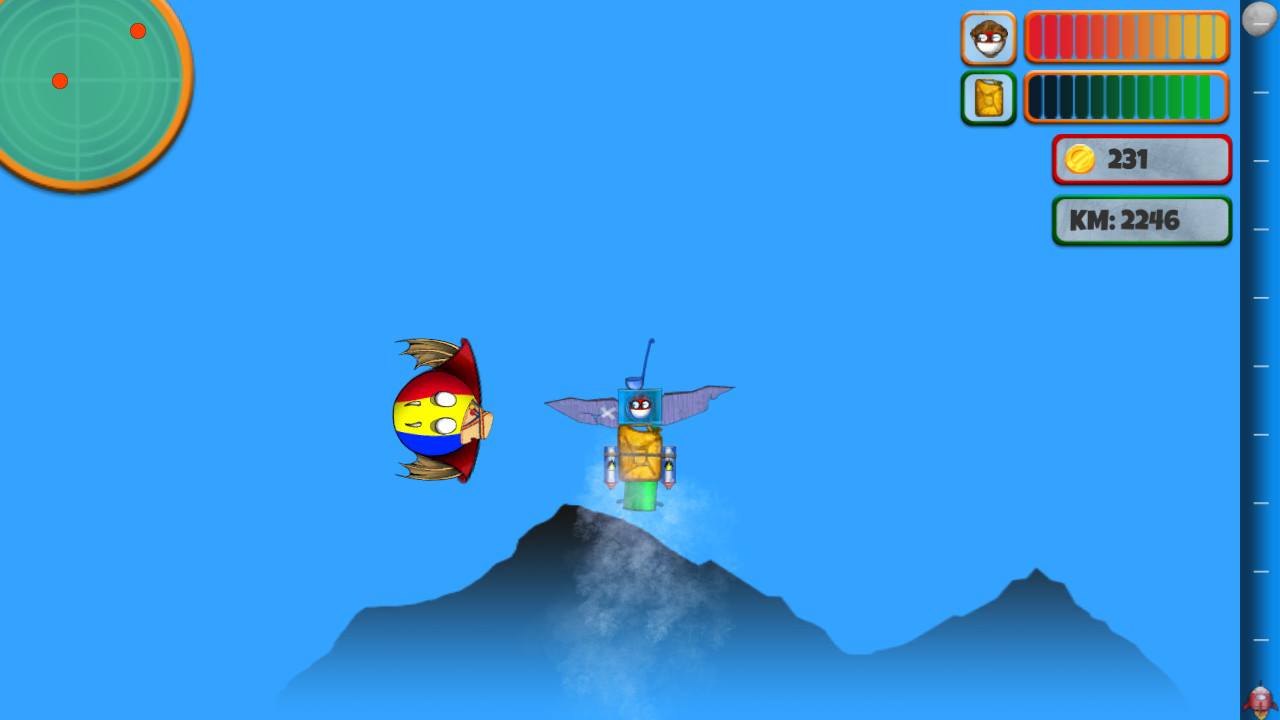 Overall, this game is cheerful, relaxing, and addictive, and certainly worth the three dollar asking price. To beat the game, you can plan on an average of five to nine hours of total play time, most of that being repetitive ascension into the sky to gather coins before exploding, while you simultaneously plan your overarching strategy. During my more than eight hours of playtime, I did not encounter any bugs or issues of any kind, other than some instances where the speech bubbles seemed to come from the wrong Countryball. Certainly nothing game breaking.

The combination of light-hearted humor and colorful graphics work together to make this a game capable of holding your attention much longer than you would otherwise expect, and one that hopefully leads to a few chuckles (or at least courtesy giggles) along the way. If, however, you are easily provoked by political barbs or relentless stereotyping, you should probably avoid this game… and most of the internet.