Famine has struck, and your stomach growls loudly. Food has become scarce, and each day you find yourself coming back home from a hunt with less and less game. Your wife is skin and bones, and your child’s sunken eyes and cries of hunger inflict pain on your own heart and soul. Your family is starving and only a miracle can save you, so you and your trusty canine companion set out on a journey to the land of the Gods. Your mission: to find the legendary Sampo, a treasure that when reforged can bestow upon its wielder the gift of endless riches and nourishment. 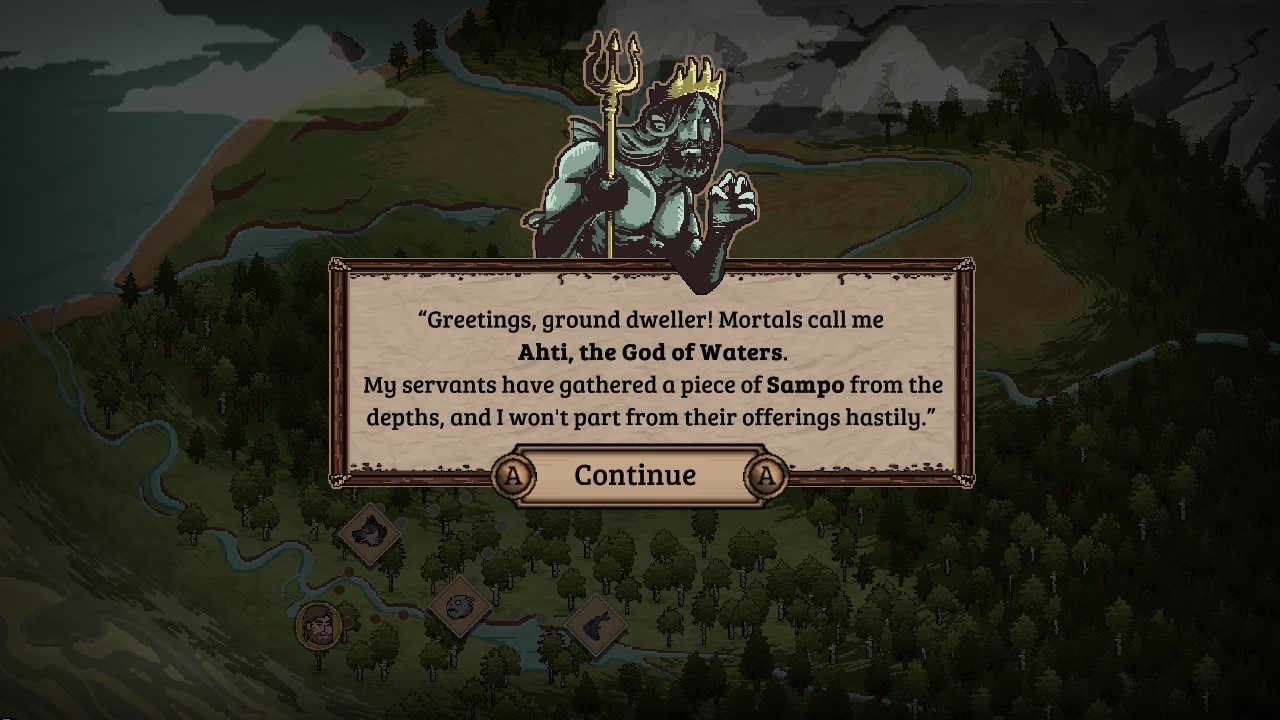 Thus begins your narrative in Please the Gods, an atmospheric old school fantasy role-playing game, inspired by shamanistic Finnish mythology and tabletop classics such as Hero Quest. You’ll encounter mythical creatures and spirits along the wooded landscapes, and merfolk that make their homes in the rivers and lakes. This mystical atmosphere builds as you encounter more events in the story as you journey toward the goal of reforging this fabled treasure, hoping beyond hope that you’ll be able to return home victorious and save the lives of your loved ones.

Traversing the map for Please the Gods is fairly simple, and is the only way to collect resources, fight monsters, and clear objectives. The map allows for very little freedom of movement, instead giving basic choices like which creature to fight on a branching path, and whether to camp out for the night or attempt to hunt mushrooms for food. Almost all of these decisions are heavily influenced by RNG, which can either help or hinder the player depending on sheer luck. 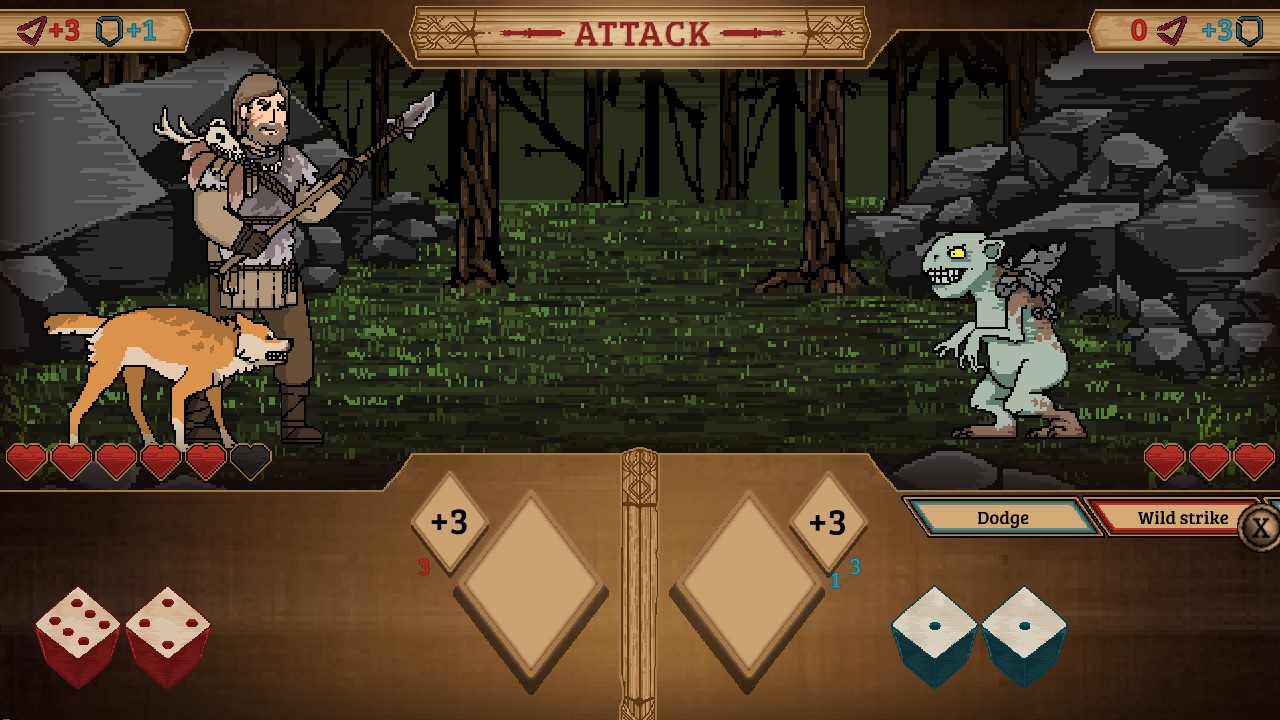 Combat is not too involved — Our hero experiences fighting in a cycle of repeating phases: attacking and defending. Each of these phases allows for the selection of one of up to four cards the player has available to them. These cards can impact a dice roll, of which the higher number trumps the other, allowing either a hit or a miss depending on the outcome. This means that most battles are a matter of luck over skill. Cards can be changed out through a skill point acquisition system, which allows the player to choose new cards from a branching path similar to a character builder. This does take the place of a level up system, so no EXP gains or grinding are possible or necessary here. As different cards have different effects, strategically choosing cards becomes necessary. All cards are immediately shown in the branching tree for skill acquisitions, allowing the player to plan in advance how they’d like to select them.

In the attack phase, once a card is selected, a dice roll is initiated. By default, each dice roll allows two six-sided die to be rolled, but if their attack card has an added die effect, then they could roll and addition one or two more. The defender chooses a defense card, which could also bolster their roll. If the attacker ends up with a higher number than the defender, the hit connects and a single damage point is dealt to the opposing creature or player. The player then changes to the opposite phase, the process repeating until one party runs out of hearts. Using cards strategically can have a huge impact on the outcome of a fight, and since you may experience several fights before getting the opportunity to rest and regain hearts, its absolutely imperative to think things through. 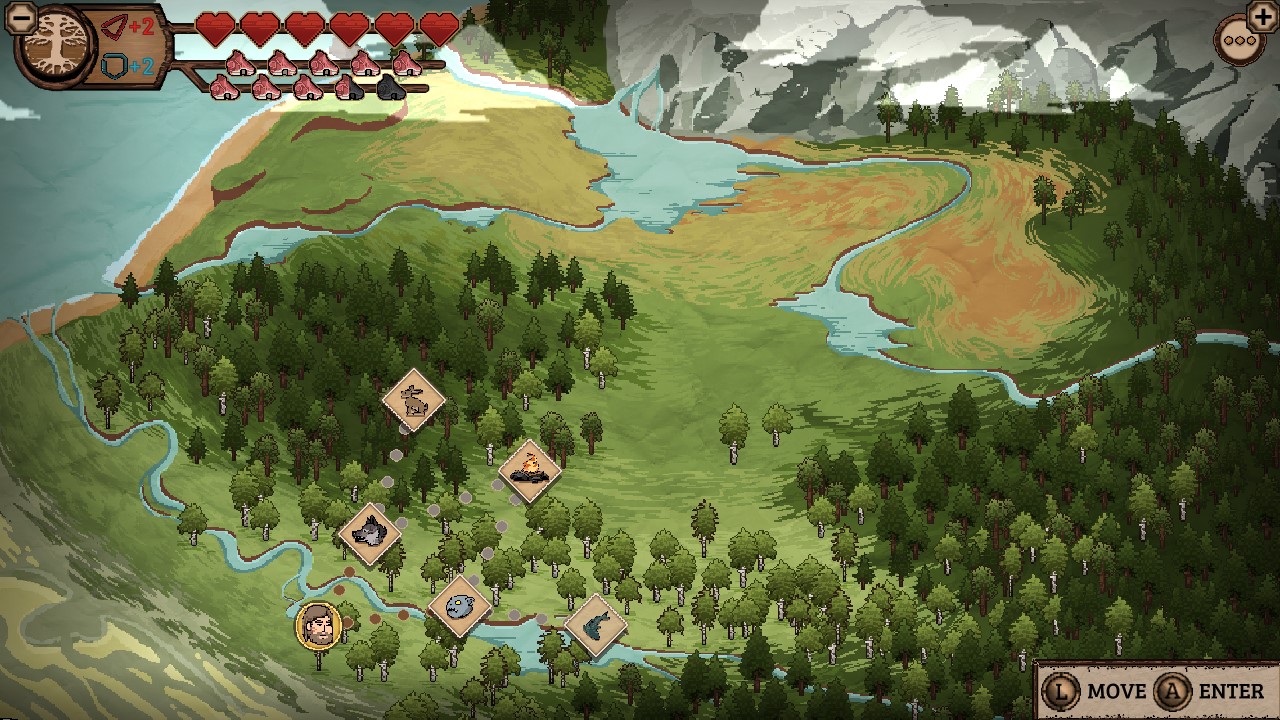 Resource management in the form of food usage is definitely a must here, as well. Food will steadily decrease as you roam about the map, though the players will have some chances to replenish their food store in the form of fishing and hunting fairly regularly. The success of these actions, though, is entirely up to random chance, and if you’re unlucky enough to run out of food, your stats take a hit and you’ll lose health when traveling. The controls for Please the Gods did not seem cumbersome at all. With a mostly narrative progression, map and card selection were very easy. Navigation of the overworld was also simple, and I was never lost or unclear on where to go next. The user interface is clean and not hard to understand, with menus keeping things concise and organized. When experiencing a loss in battle, you do start over at the beginning of your current quest, which honestly made a lot of sense and allowed me to rethink my strategy moving forward. 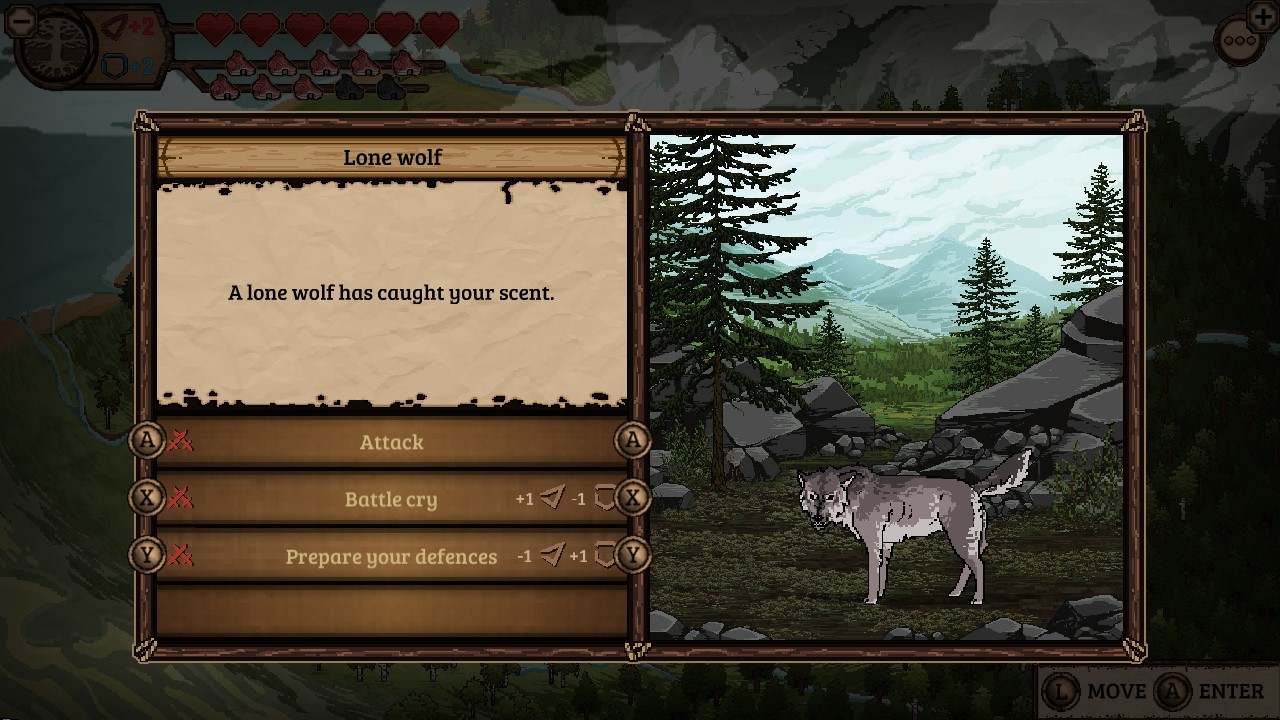 The whole game has beautifully made, simplistic pixel assets, the likes of which made me feel like I was in a modern-day re-imagining of The Oregon Trail with an old-world flavor. The overworld map is a good example of pixel art done well, with the lush woodlands, winding rivers and vast lakes spreading across the land. Battle art is also fairly pretty, with muted colors that feel more realistic than eye-catching, giving me the vibe of older PC adventure games rather than today’s more vivid answer to retro-style graphics. The world is not made to look inviting, and that fits so well with the overall tone of this story — you are fighting against a famine, and nature owes you nothing and does not exist to garner false hope with popping colors and pretty explosions.

While the world about you seems peaceful, its tranquility aided by the relaxing soundtrack, though battles themselves do a good job of reminding you that this is no simple nature walk through the forest. The choice to use Finnish mythology was a good one for this type of story — The creatures you encounter add the mysticism that one would expect from a turn-based RPG, while throwing you into a battle system that feels entirely like a tabletop gaming experience, completed by the skill tree style of choosing abilities. The quests you are given by the creatures you share the land with add a ton of depth and build up the world around you into something that ends up being fairly immersive, even with the downfall of your progress depending solely on the luck of the dice.

Please the Gods is a story that centralizes on hopelessness, and one that does a good job at illustrating that feeling in not only its story, but also the assets that it uses to tell it. While you depend solely on random chance to proceed, it becomes clear over time that you are that the mercy of the world around you and that it’s by the graces of luck, or even the Gods themselves, that you’ll be able to complete your quest. While restarting the same quest over and over can feel about as rewarding as an assembly line job, the unique blend of tabletop and turn-based RPG experiences are enough to warrant giving this a chance if you are curious, or simply into the idea of Mythology-meets-Oregon-Trail: The Game.