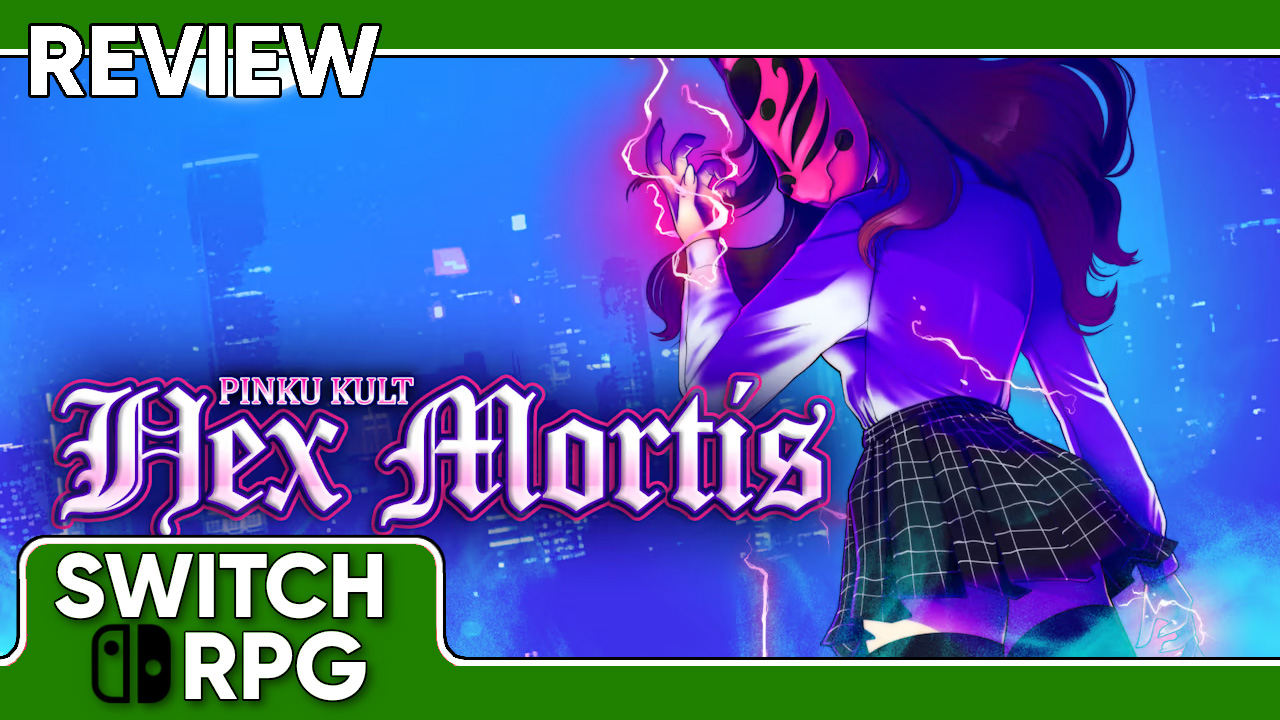 Life can take an unexpected turn when you least expect it. Whether it’s a sudden move to a new city or starting a new job, you never know what life has in store for you. But what if that unexpected turn ended up with you getting involved with strange monsters, magic, and forces larger than the human race in general? Pinku Kult Hex Mortis takes the player through what should be a simple investigation but ends up being a matter of life or death.

You play as a character currently living in Razore City, a desolate place where the inhabitants are looking to make something of their lives. You’re no different, but you aren’t having much luck finding a job. That is, until you come across a strange job ad looking for someone to investigate the missing persons that have increased in number, along with finding any suspicious individuals who could be behind these disappearances. And just as soon as you submit the job application, you’re told that you have gotten the job due to being the only one deemed “worthy.” 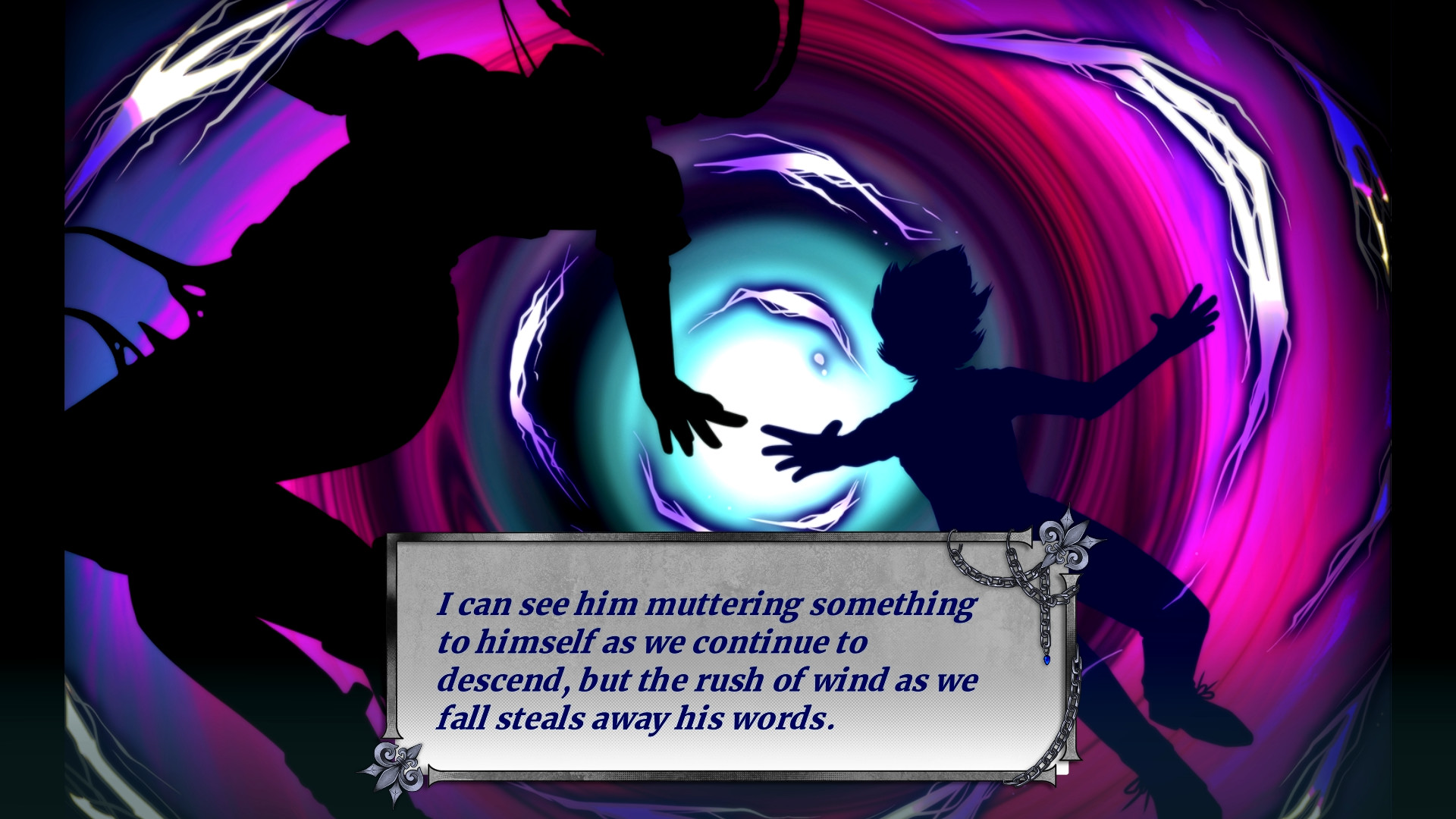 However, it doesn’t take long to realize that the job that you’ve decided to take on is much more complex than anticipated. Strange monsters start appearing in dungeons that crop up all over the city and there’s rumblings that a strange, masked individual is behind everything. To figure out the whole story, you’ll need to do a bit of digging in dungeons, picking up items to take back for inspection.

Given the game’s short length, there aren’t any side quests to take on. And due to that, any additional lore not told in the story is pretty much relegated to items that you pick up. These items aren’t too hard to find, since dungeons are pretty linear. And while you’ll be able to piece together the story just fine without finding these items, it does explain a bit of the backstory of what led to the events of Pinku Kult Hex Mortis. 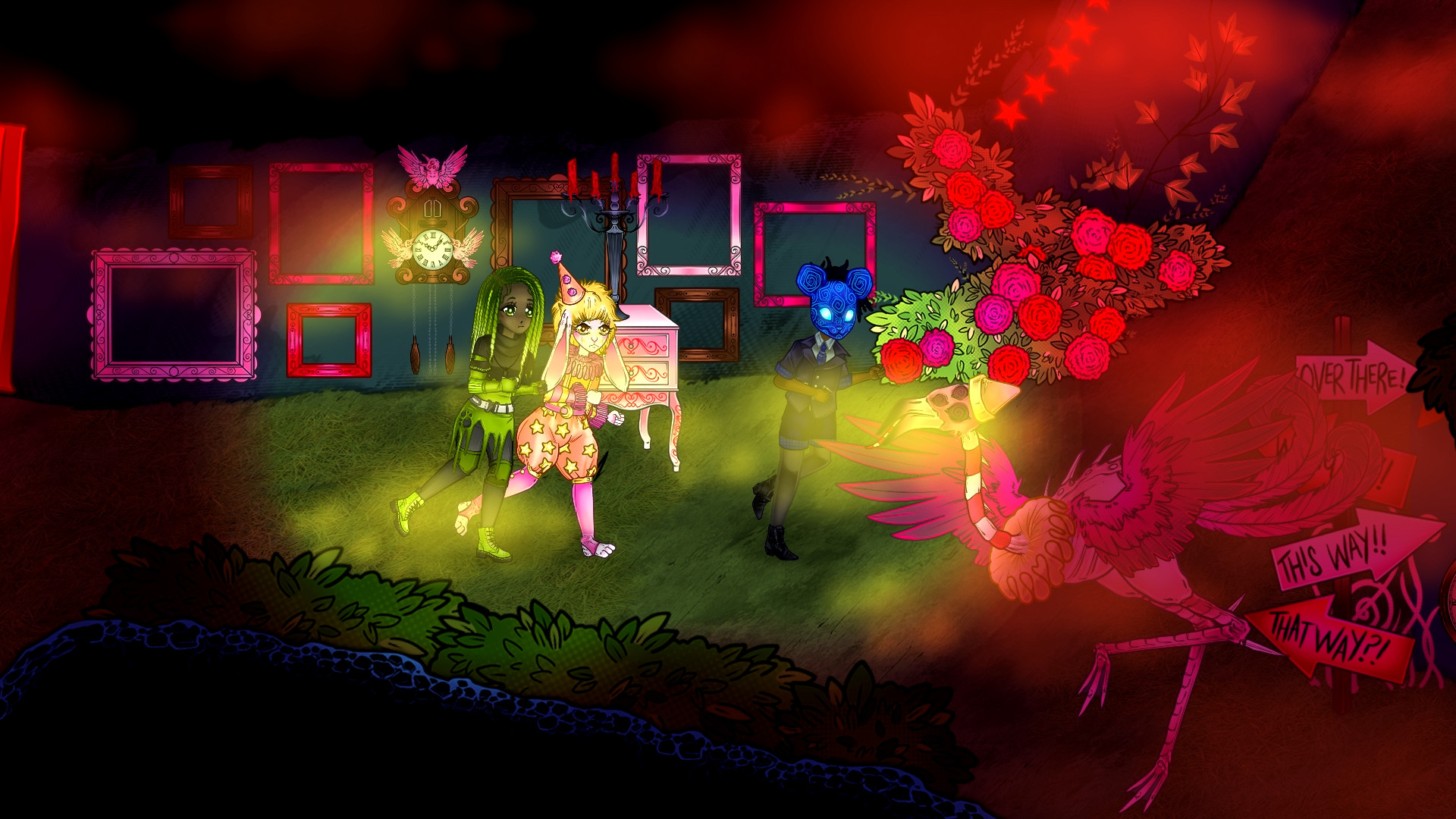 Pinku Kult Hex Mortis is a turn-based RPG where you navigate your character around several locations, interacting with items in the world along with battling against monsters. You’ll come across many dungeons, with a boss at the end that you must defeat in order to escape.

You will control a team of up to four different characters in turn-based battles. All monsters and boss fights can be anticipated before you enter battle, with you being able to see all enemies on the map. While you can try to avoid battle against regular enemies, the hit box around them is much larger than anticipated, with you entering battle even if your character doesn’t actually touch the enemy. Once you’re in battle, you’ll be able to see the turn order on the bottom left-hand side of the screen. During your turn, you can attack, use skills, or use an item. Each character has two sets of skills: skills that do damage and skills that either heal or boost your MP. 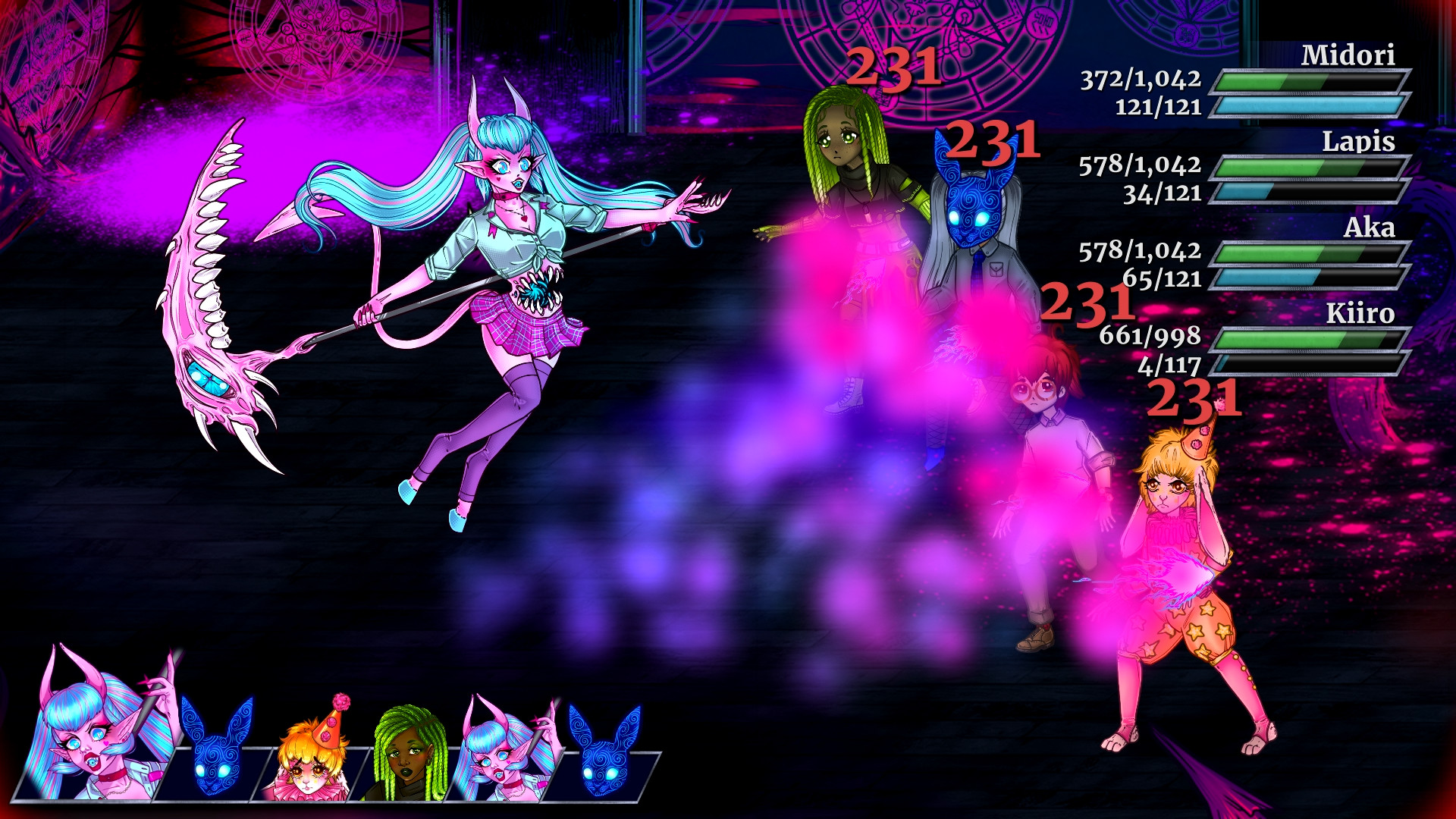 Battles tend to be fairly straightforward and outside of a few battles, they are actually more on the easy side. Just as long as you keep on top of healing when you’re at risk of being knocked out, you can easily overwhelm your enemies. One particular quirk that you can actually use to your advantage is the fact that killing blows only happen once you’re down to 1 HP. So, whether you’re hit when you have 1000 HP or 2 HP, your health will always go down to 1. At that point, you have to make sure that you heal, otherwise you’re at risk of being knocked out.

All bosses have three phases to them, with their attacks hitting harder with each stage. But of course, since you’ll have more members on your team than bosses typically do, these battles don’t pose too much of a threat. There are cases where there are two bosses that you have to fight against, but as long as you take down the bosses one at a time, those fights are also easy to manage. 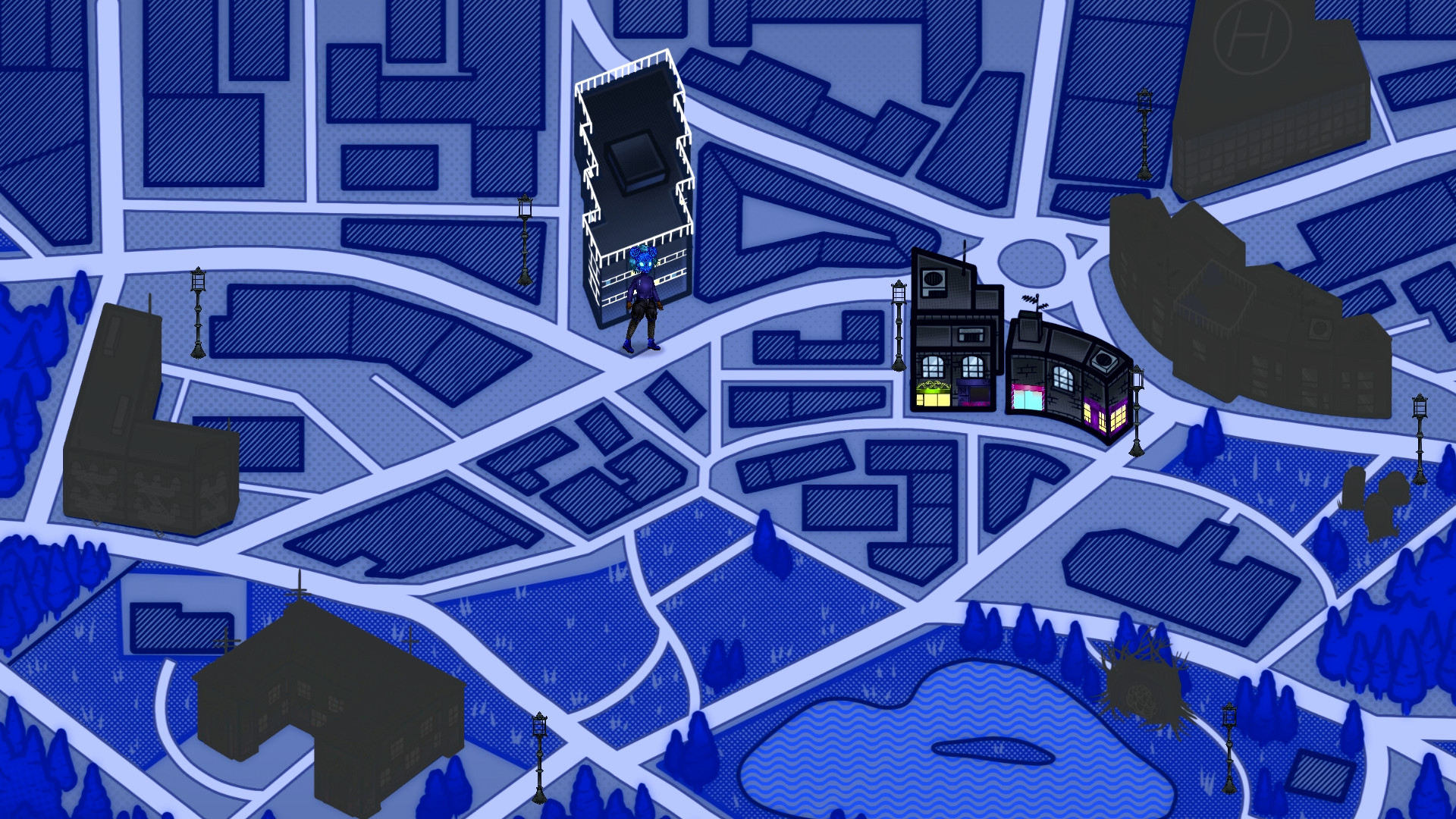 Everything in Pinku Kult Hex Mortis takes place in Razore City, which is a small city for you to explore. As you traverse through the main story, you’ll unlock new locations in the city to navigate to. However, there isn’t really much to explore and take in, leaving players with no choice but to move forward in the story rather than dawdle around. There is a day and night mechanic that triggers whenever you rest at your apartment, with you mainly exploring dungeons at night while moving around in the city during the day. Outside of the story blocking your progress, there isn’t much of a difference between night and day.

The 2D art style for Pinku Kult is very interesting, if not a bit off putting. It’s a strange mix of cartoony and realistic that’s reminiscent of games like Fran Bow and Little Misfortune, both in the general tone of the art as well as the animation, although the animation is much more stilted here than in the aforementioned games. Compared to other RPGs on the Switch, this game definitely stands out though. However, the UI and text choice stands out as well, but not for as good a reason. Given the game’s cheap price point, the UI and text do look a bit dated. 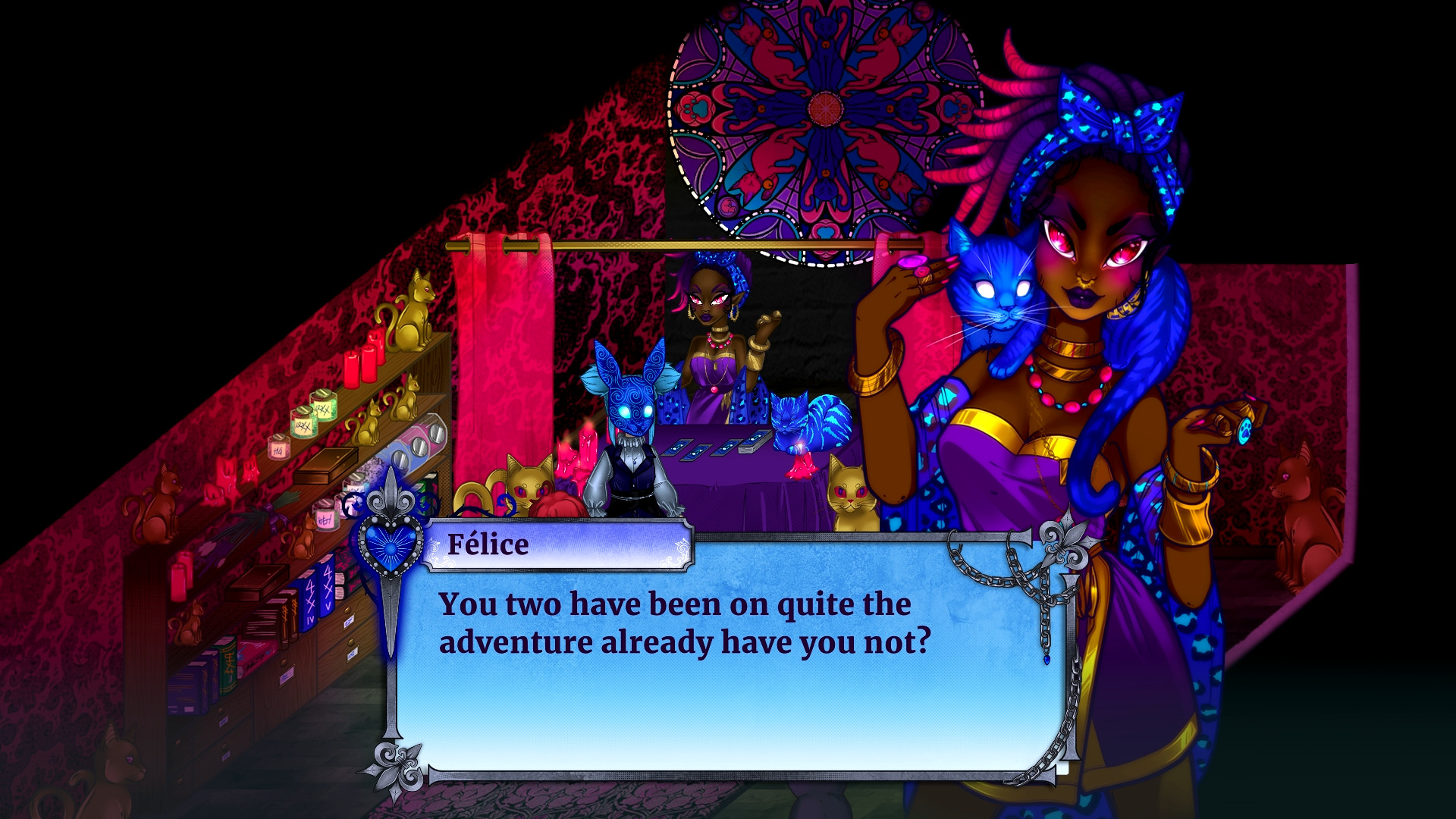 The music is very haunting, with heavy guitar riffs and booming drums for battles, as well as chilling piano pieces while exploring. However, the music does feel a bit much in terms of how bombastic it is. Along with that, it can eventually end up being very one-note, but it does do its one job well when it comes to setting the mood and leaving the player with a creepy vibe.

Pinku Kult Hex Mortis is a decent RPG in its own right, and that is probably its biggest downfall. The combat plays fine, the art is very unique and interesting to look at, and the story is solid. But with that, there isn’t really anything that truly stands out to encourage someone to take a chance with this game as opposed to other RPGs on the Switch. That said, don’t take that as a reason to avoid it if it’s already caught your attention. Pinku Kult Hex Mortis is a straightforward and short experience, but it is one that you’ll more than likely find yourself still enjoying.