Penny-Punching Princess is the latest release for the Nintendo Switch from developer Nippon Ichi, published by NIS America. It is a top-down, 16-bit action RPG with a very unique premise and style and instantly grabbed my attention with its colorful setting and character designs. If you are a fan of cash and bribery mixed with chaotic battles against hordes of enemies, traps and maze-like dungeons, then keep reading.

You play the game as a tenacious Princess (or Isabella, a second playable character later in the game) trying to rebuild her kingdom. It was lost due to some poor financial decisions by her father in a story that ultimately revolves around, you guessed it, money. The antagonist here is the Dragoloan family that runs a front as a lending company, but is really a group of mobsters out to scam everybody, pretty much evil all around. There’s a lot of charm and silliness in each character and the story doesn’t take itself too seriously either. 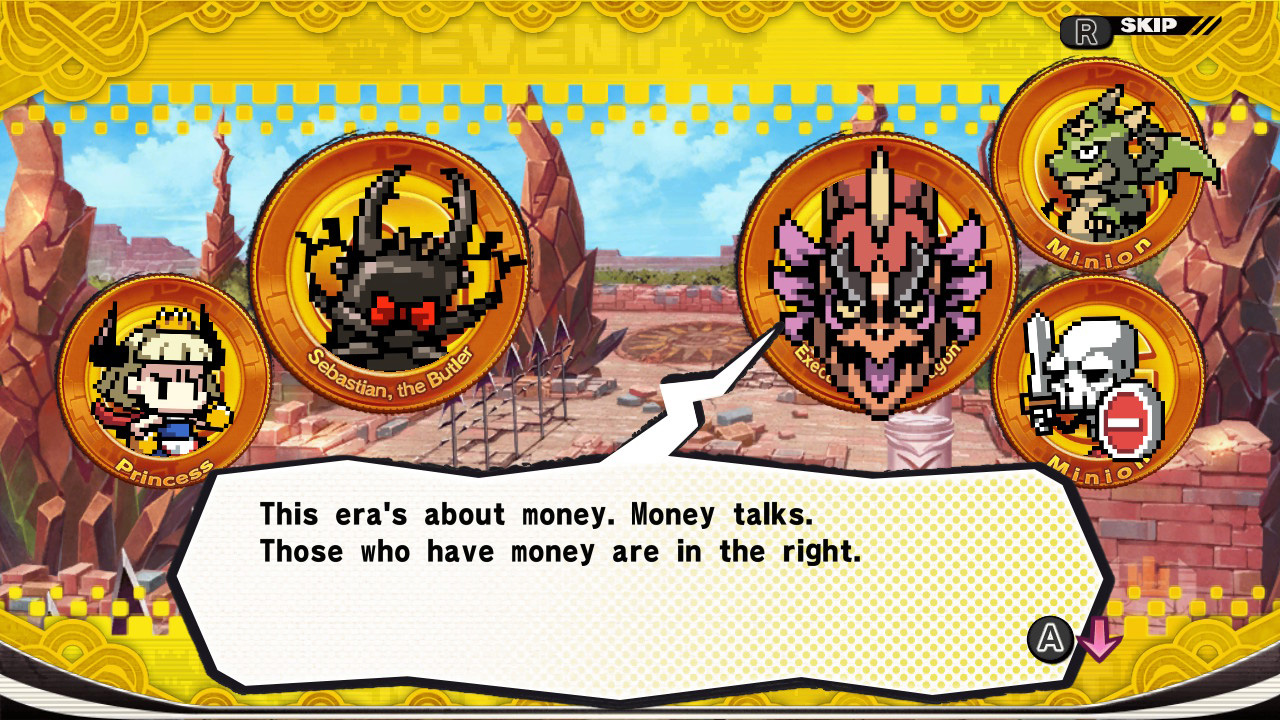 At first, I took this game to be a straight forward Action RPG, one where you just go around and beat the snot out of monsters, like so many others. Penny-Punching Princess is far more than that, however. Instead of earning EXP, you earn money from the foes you defeat and skill points for completing missions. Skill points can be used to improve stats on the Princess and enhance her abilities. The game makes you go through a short tutorial at the beginning in an attempt to explain how money and the bribe system works during battle. It was hectic and confusing to get through, and it wasn’t until I replayed the first few missions that I really understood the mechanics of the game.

After failing many of the early missions, it became clear to me the trick to winning in this game: bribes. As you go around each area and earn money, you can pull up a calculator on your screen and tap out bribe amounts, which can vary depending on the enemy, and then bribe them to join your side (giving you a new attack as well). When I started, I set the control scheme to be buttons only and the mechanics were very cumbersome and hard to operate. I flipped back to touch controls and it ended up being a mix of buttons to move/attack and touch to pick enemies and relics (traps) to bribe. The touch system actually worked a lot better, in my experience. Once you get the hang of it, the gameplay here is actually a lot of chaotic fun. After a few missions, my hands were literally sweating as I was trying to bribe an enemy in time to use its ability to kill a larger enemy heading my way. Combine this with the relics (traps) around the Princess in each area and the battles get really crazy intense. In short, you simply cannot button mash your way through this one. 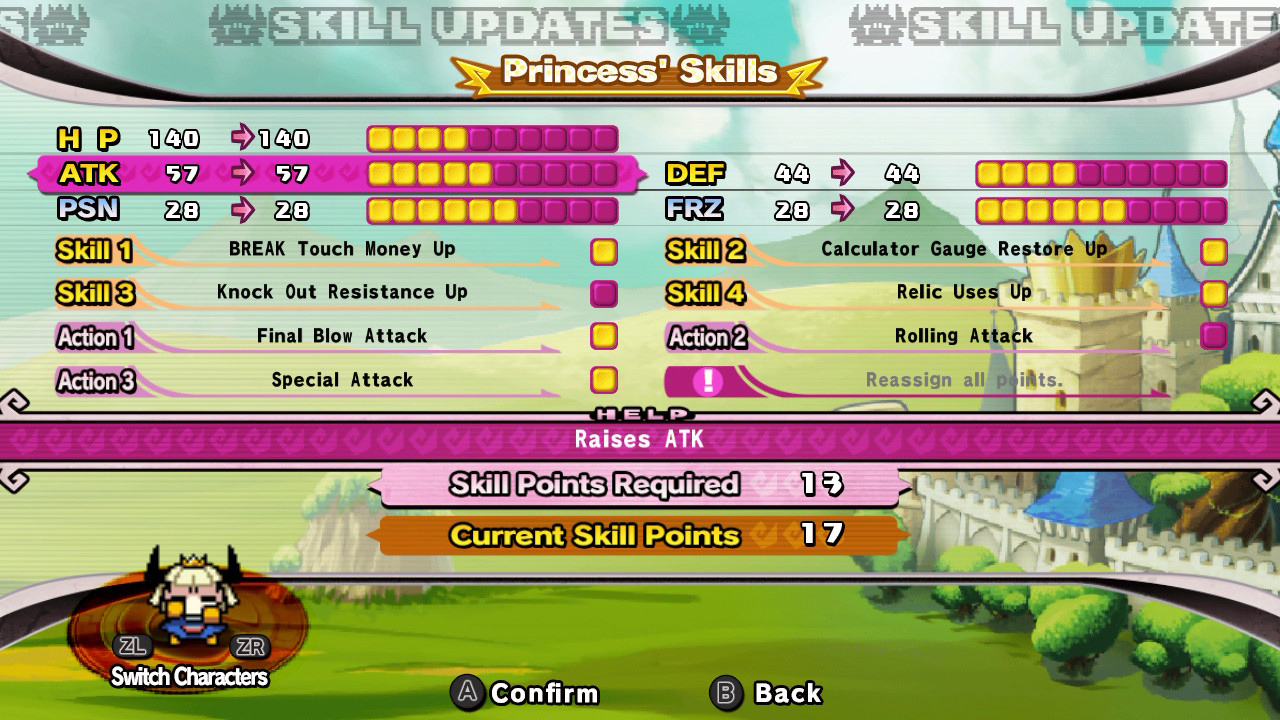 Outside of missions, there are many other systems the game presents you without much explanation (besides some hard to follow cutscenes between the Princess and Sebastian), but with a little experimentation it was pretty clear as to how they work. Bribing enemies and relics is very important in the game and I found myself going back to missions with specific enemies in mind to bribe on that run. Depending on who you bribe, you actually build a population of citizens at your castle. These citizens, in turn, unlock specific armor and statues you can craft that increase your stats or unlock skill points. I found a pretty good rhythm early on in who I needed to bribe, because the game actually lists out the enemies and relics available on each mission. The grind is real, but the draw to play is strong too, and I found myself enjoying the challenge of going back through a mission with specific bribe targets in mind.

Bosses, or Executives as the game calls them, involve HUGE enemies surrounded by tons of regular enemies and traps. In my experience, these fights are really tough. The bosses can take up the majority of the screen, making it hard to bribe and see what else is trying to kill you. 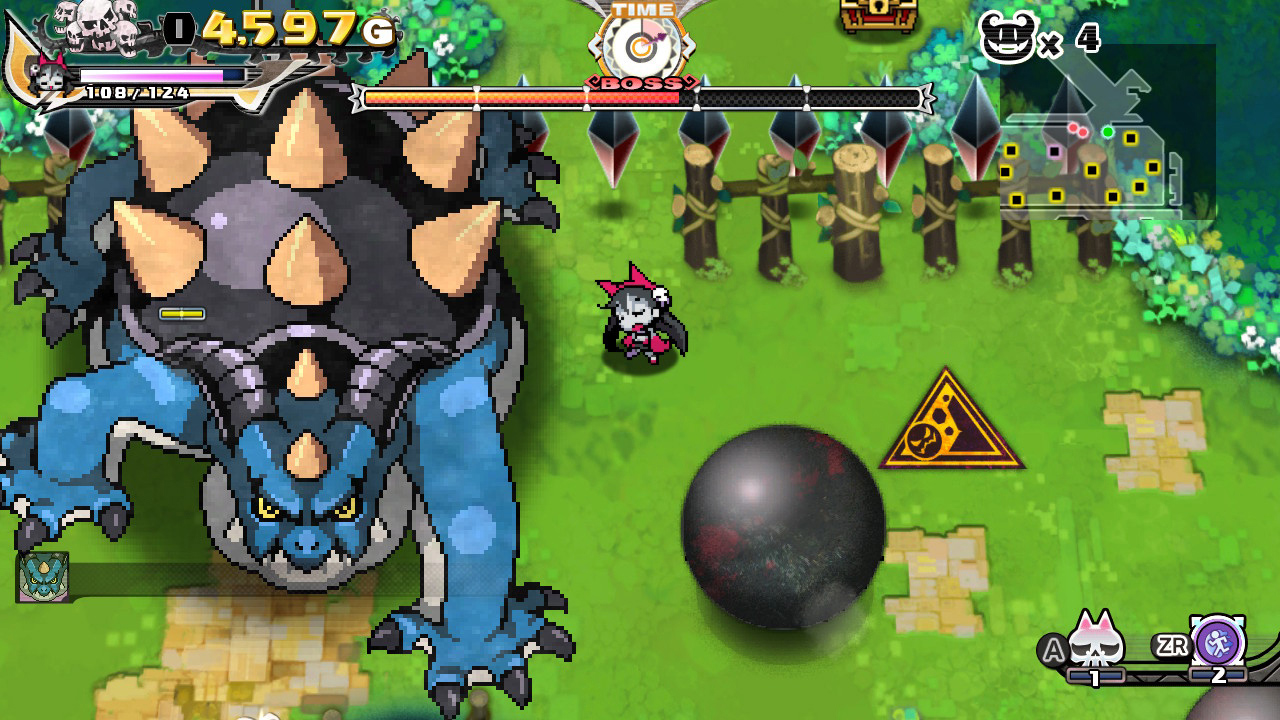 The calculator the Princess can use was given to her by Zenigami, the God of Money, and becomes more powerful as the game progresses. It actually comes up on the screen when you hold down ZL and each enemy or relic then shows their bribe amount. In a hectic battle, when say 4-5 enemies and relics are on the screen at once, it can be tricky to enter the right amount and then bribe the correct enemy on the screen, all while you are being chased and attacked. I feel like the craziness is by design and just takes some practice to do it effectively. Due to this, you can actually waste money by typing in too much for a bribe. Also, you have to wait for your Calculator bar to refill before you can bribe again, unless you find a refill item in a chest. Many times I would end up running away from enemies waiting for that bar to fill up, but that’s part of the fun! The game knows this and likes to lock you into parts of the map to keep you from being able to run too far.

I actually wish there was an option to set the game to more of a “wait” mode when it comes to pulling up the Calculator on-screen to bribe. If the game would pause, it would reduce the chaos a bit and ease-up in certain situations. I did not see anywhere in settings to do this, so I think it’s just meant to be a challenge. As you keep playing, the Calculator can do another thing called a “Coin Miracle,” which can heal you, hurt enemies, do random things that help/harm you, bring you back from a game over, and more. Unfortunately, the randomness of many of the coin miracles really hurt my desire to use the option, so I didn’t use it very often. It was helpful to come back from a game over, but you start back with so little health it’s almost useless. 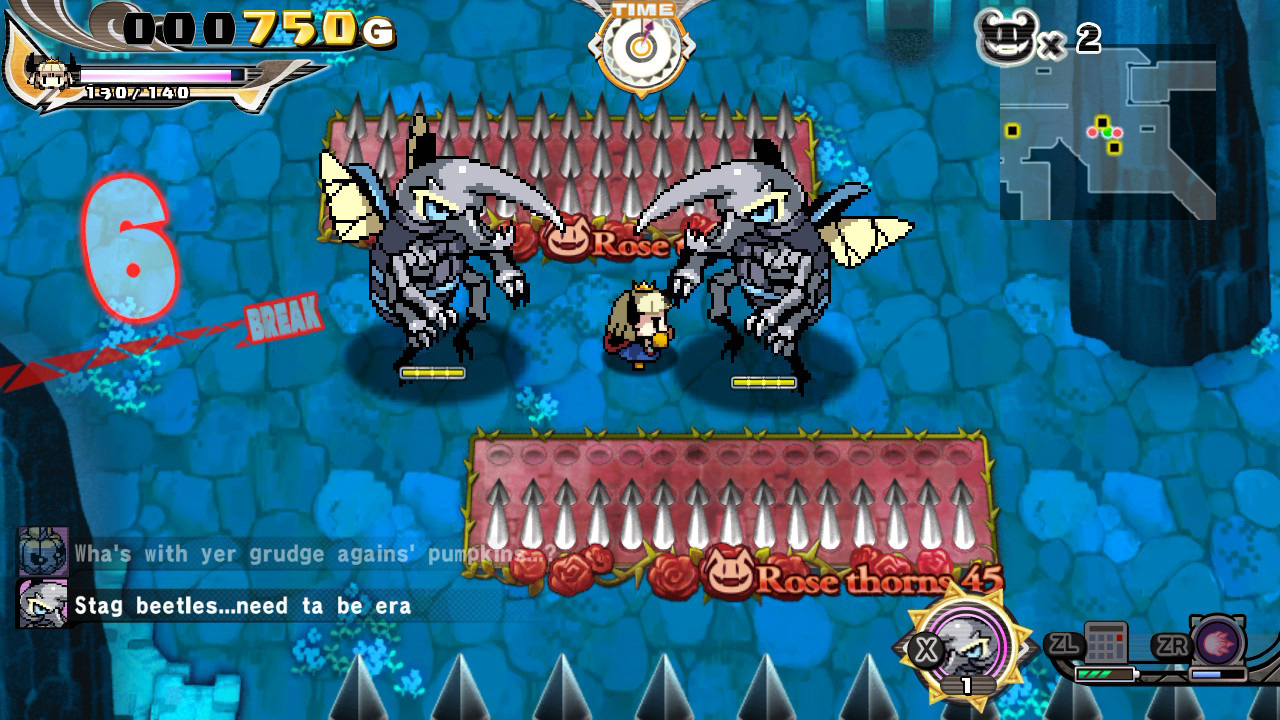 Graphically, Penny-Punching Princess is a mix of 2D sprites with 3D backgrounds. It’s charming in a cartoony way, but there isn’t a ton of detail in the environments. The artwork for various parts of the game is great also, and the kind of thing you’d expect from Nippon Ichi. This game is only trying to do so much graphically, and it’s not the kind of game you play for the graphics anyways. Regarding the music, it goes hand-in-hand with the charming cartoony feel of the game. The tracks work for what they are, but can be a bit repetitive. After a few hours of playing, you’re bound to have a few of the melodies stuck in your head. None of the music is as epic as something you’d get from Final Fantasy or the like, but it’s not bad either.

Penny-Punching Princess could be a great game, if it weren’t for some frustrating decisions in how the mechanics of the game work, specifically in the meat of the game’s missions and enemy encounters (and the bribe system). It can be a lot of fun, but it can also make you want to chunk your Switch across the room (not recommended). If you don’t mind replaying the missions in the game over and over, working on bribes and growing your citizen count, then the game can be quite enjoyable. Don’t expect a deep story though, and be prepared for some challenging boss fights and missions. There’s a lot of depth and content in this game though if you have the patience for it.