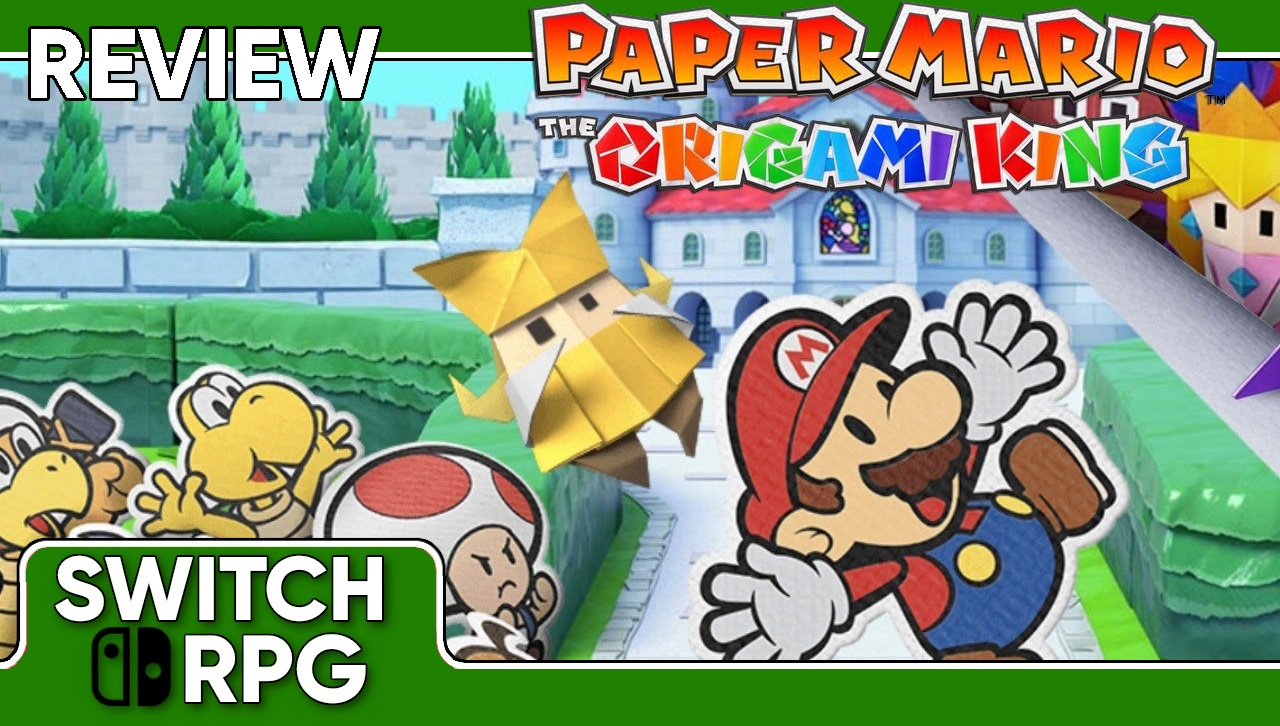 The long running Paper Mario series makes its debut on the Nintendo Switch with Intelligent System’s latest entry, Paper Mario: The Origami King. To be completely honest, I haven’t played a Paper Mario entry since Super Paper Mario on the Wii. However, like many others, I have wondered whether or not this game would be a return to form (a la Paper Mario N64 or Thousand-Year Door on GameCube). Having completed it, I can confirm that it is, sadly, devoid of any major RPG mechanics – but that doesn’t make it a bad game, either. 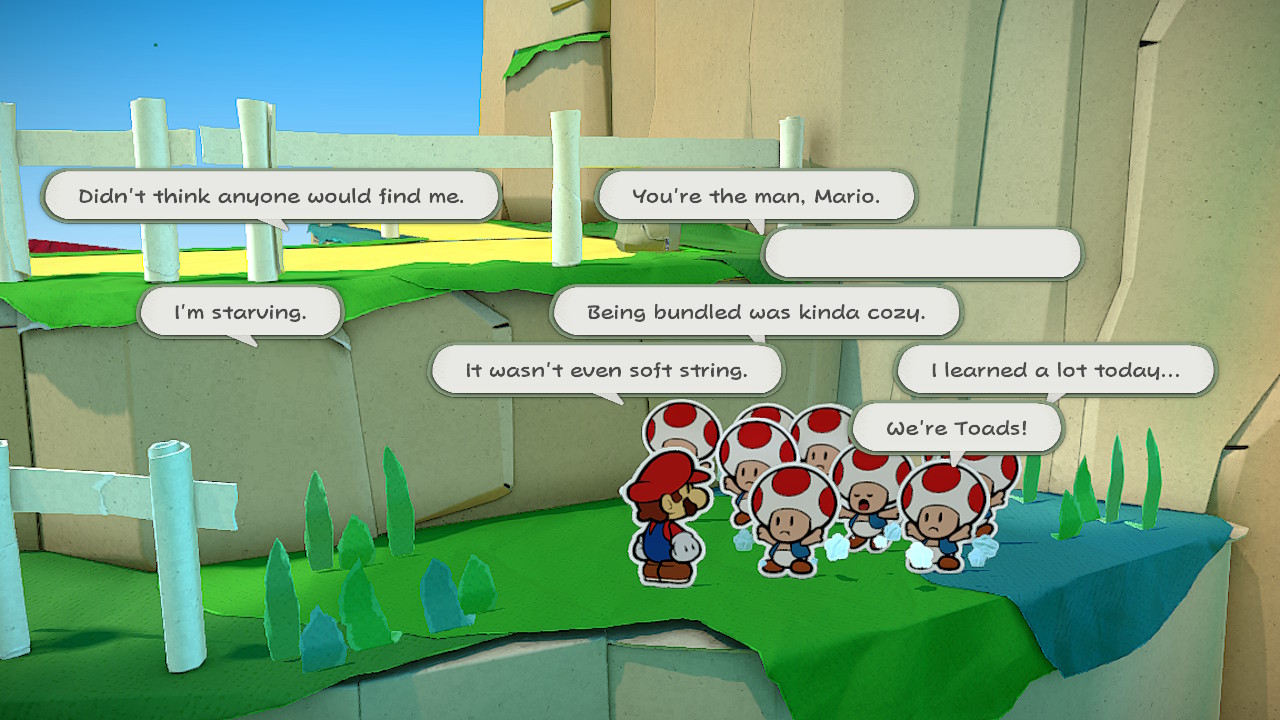 The story begins in a fashion many Mario fans are accustomed to – Mario and Luigi are on their way to an event Princess Peach has invited them to; this time being the Origami Festival. As they arrive at Toad Town, they notice it has been deserted, so they proceed up to the castle only for the doors to lock tight behind them. Sadly, the Peach that soon greets Mario & Luigi isn’t quite what you’d expect – that being a fold-up, origami version of the princess. Peach then asks Mario a question, dropping him to the depths below the castle, regardless of the answer.

After meeting several of Bowser’s Minions and being introduced to the 1000-Fold-Arms mechanic (a puzzle solving and damage dealing tool), Mario meets Oliva. As Mario and Oliva escape the dungeon, they discover a folded-up Bowser attached to a clothespin.

The party makes their way to the top of Peach’s castle, where they meet Olly (the Origami King) who then engulfs the castle in five streamers, transporting the castle atop a distant volcano. After the events at the castle, Mario finds himself stuck in a tree in the forest outside of Toad Town. Quickly freeing himself from the Tree, and rescuing Oliva, he sets out to find Luigi and rescue the castle (and Peach) from Olly’s clutches. 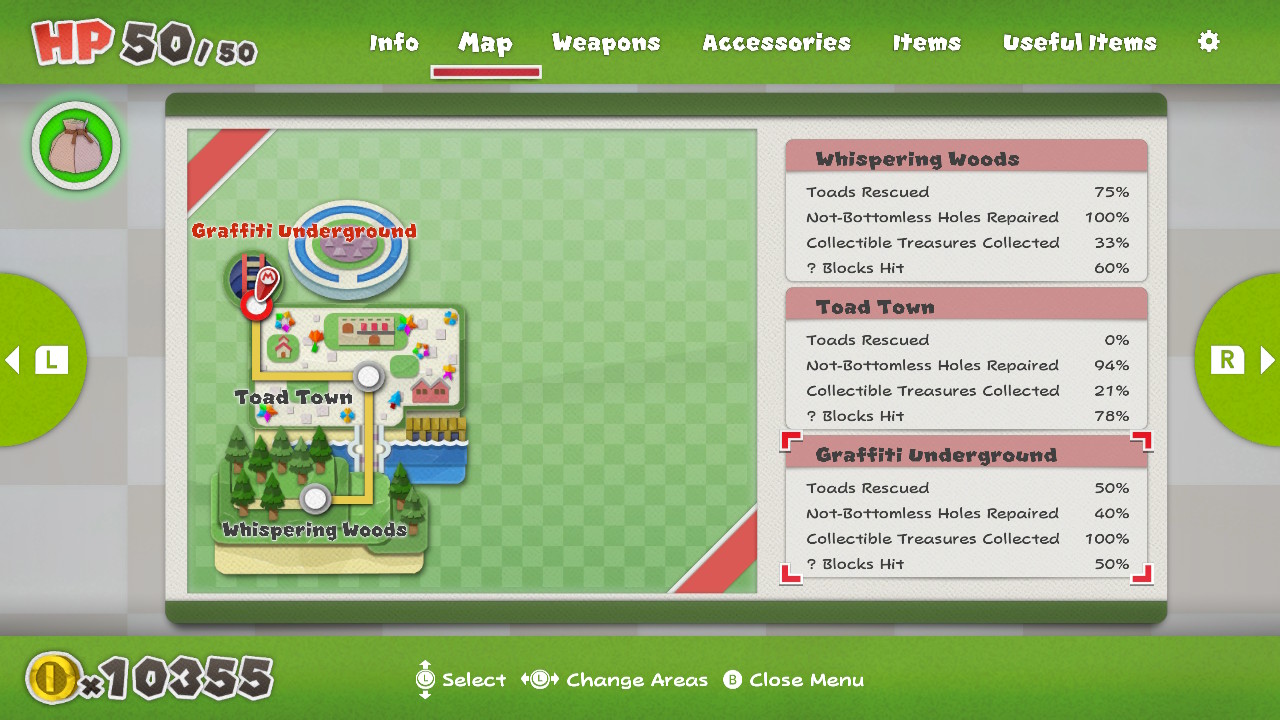 Paper Mario is a bit of a mixed bag when it comes to gameplay. When you are out exploring the giant, interconnected open world, it’s fun… but only if you avoid the random battles. The earliest battles teach you the ins and outs of the new battle system, and while it’s enjoyable at first, you soon realize that they provide no experience points. Sure, you can participate in them for coins (more on those later), but you end up with so many of those before long that it is a moot point. Random battles aside, there are plenty of things to discover while tracking down the streamers that hold Peach’s castle captive.

Each area has several collectibles, including Not-Bottomless Holes that require confetti to be thrown on them, collectible treasure for the museum, and “?” blocks that can come in both visible and invisible varieties. There are also loads of Toads to hunt down that will collectively become an audience in battle, providing the player various forms of aid. Their help comes at a cost, however, as you need to pay them in “Toad coins.” Once you are comfortable with the battle system, you really don’t need to utilize this system unless you just have an abundance of coins. Anyway, Toads can be found everywhere, but finding them all is worth it just for their humorous dialogue alone. 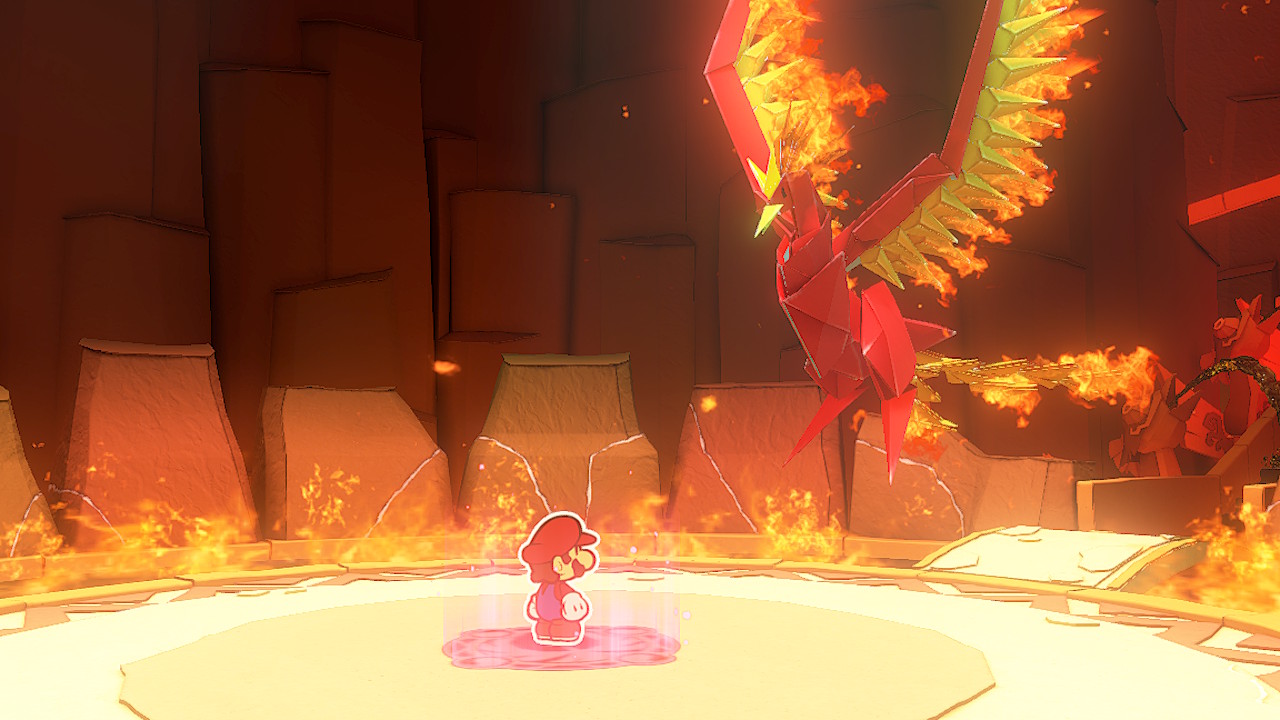 The end goal of each biome is to get to the boss controlling the colored streamer. Getting there will require you to solve puzzles and complete a mini dungeon to gain the area’s Vellumental ability (provided by beating the boss). Origami King has two types of battling – one with a boss, and the other with lesser enemies found out in the open world – and neither are the return to form many people wanted to see. Partners do make a return to an extent, though. Over the course of your adventure, several characters will join you…but you have no control over them and their participation is random. This half baked approach to the system makes it feel more like an afterthought than anything.

The combat is at its best when fighting bosses, as the boss battles are unique, take some thought, and are enjoyable overall. On the other hand, the standard battles are easily one of the game’s lowest points. Battling random enemies becomes a chore, and fast, and are better off ignoring (unless you need coins) whenever possible.

When you run into an enemy in the open world, you can perform an action to gain a slight advantage by jumping or hitting them with your hammer. All battles take place on a ring-like stage in front of an audience. Each battle starts out with enemies spread out across various spaces on the grid. You need to line up the enemies by spinning and adjusting the ring layers. Once you have them lined up, you can perform various attacks using Mario’s boots, hammer, or by using certain items.

If you line up all enemies perfectly, defeating them shouldn’t take more than a couple turns. On the receiving end, Mario has the ability to actively block attacks in order to reduce damage. When both sides have taken a turn, the cycle starts again with you rearranging any enemies left over in order to continue the process once more. While this might seem fun at first, again, there is no reward for these encounters besides coins. 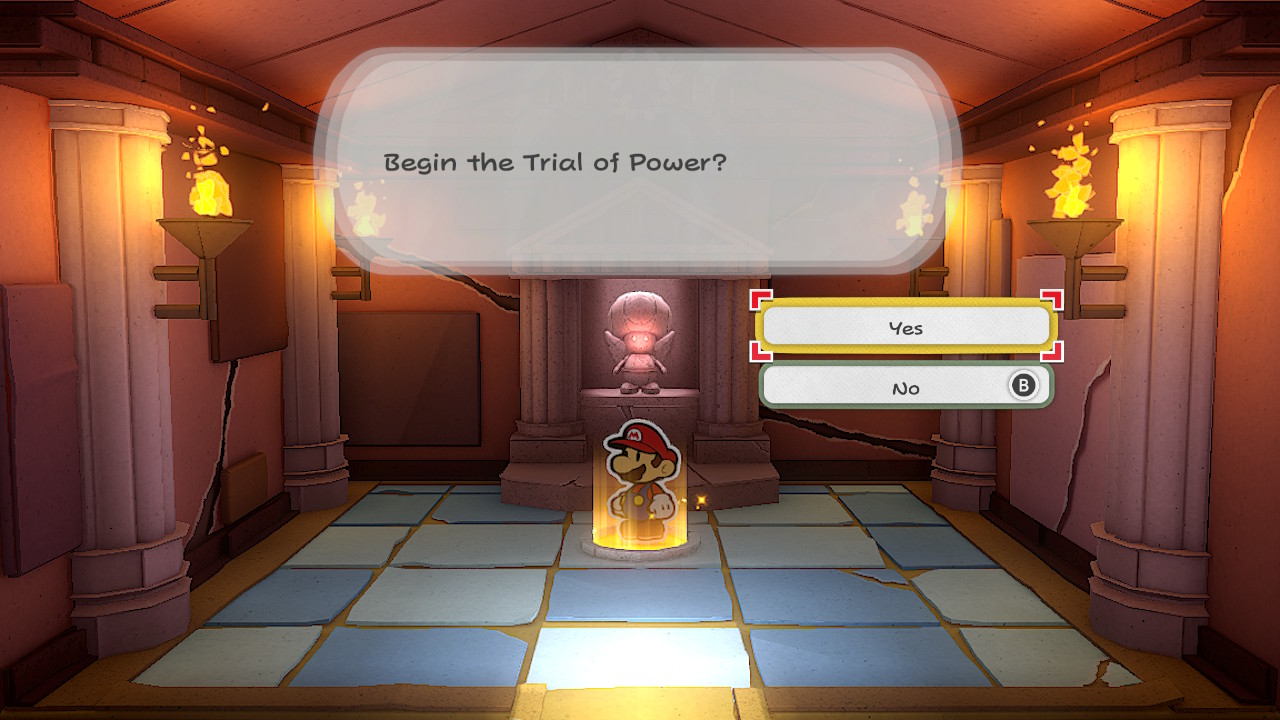 Boss battles, again, are where the fun is at in terms of combat. In addition to having to figure out their weakness, Mario must make a clear path to the boss by manipulating the ring system. Navigating these rings varies from boss to boss, as each provides their own twist. For example, one boss will add ice to certain spaces that can damage or push back Mario if he happens to touch them, and can prematurely end the player’s turn.

When building the path to the boss, you also need to look at where on/off switches are as they can activate chests that contain items, allowing certain spaces the use of a Vellumental power or the 1000-Fold-Arms. Planning your path to the boss and figuring out / exploiting its weakness makes these battles unique and exciting.

Coins can be used to purchase various items and accessories. Accessories can grant Mario different bonuses, such as an increase to Max HP, further reducing damage when blocking, and additional time when arranging the battle rings. There are non-combat accessories, also, that alert you when you are in the vicinity of a Toad, treasure, or a “?” block. Mario’s boots and hammer can be upgraded, but their benefits are finite – they eventually wear out, but can provide some powerful benefits for their duration. 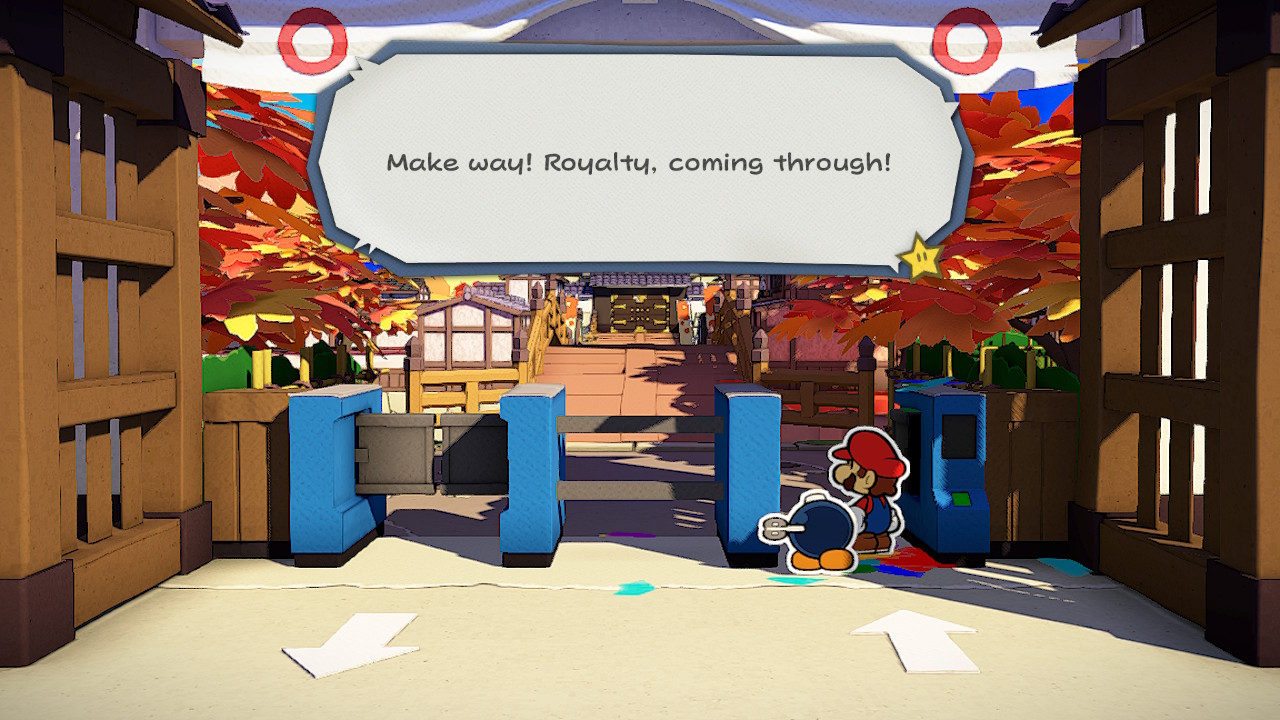 Origami King is hands down one of the most vibrant and colorful games on the platform. From the opening area and cinematics (when the castle is transported away, wrapped in colorful streamers) to all the various biomes you can explore, the visuals are excellent. The styling, music, and writing all work well with each other and help smooth out the rather rough gameplay edges mentioned previously. Shogun Studios, a theme park area in the game, is one of the best examples of all the individual presentation components working well with one another.

The self-contained worlds of past entries in the series are gone in favor of one giant, interconnected world, with loads of things to discover and places to explore. Whether it’s finding all of the Toads, collectibles, deciphering puzzles, or hunting down secrets, everything about this world is cheerful and fun, and I hope they continue with this design philosophy in the next entry.

Ultimately, Paper Mario: The Origami King feels like it is struggling to find its true identity. In some ways, it feels like the team abandoned its roots while others seem like an ill-fated attempt to draw from its predecessors. Neither feel “great,” and the general lack of RPG mechanics doesn’t help whatsoever. There is some fun to be had here, of course, but it certainly isn’t the second coming of The Thousand-Year Door.

If you are ok with a more simplistic approach to the series, then you might really enjoy it. While I did enjoy my time with Origami King, I hope that the next installment has more meaningful depth and RPG mechanics.

Solid review. I hope everyone gets another crack The Thousand Year Door one day.