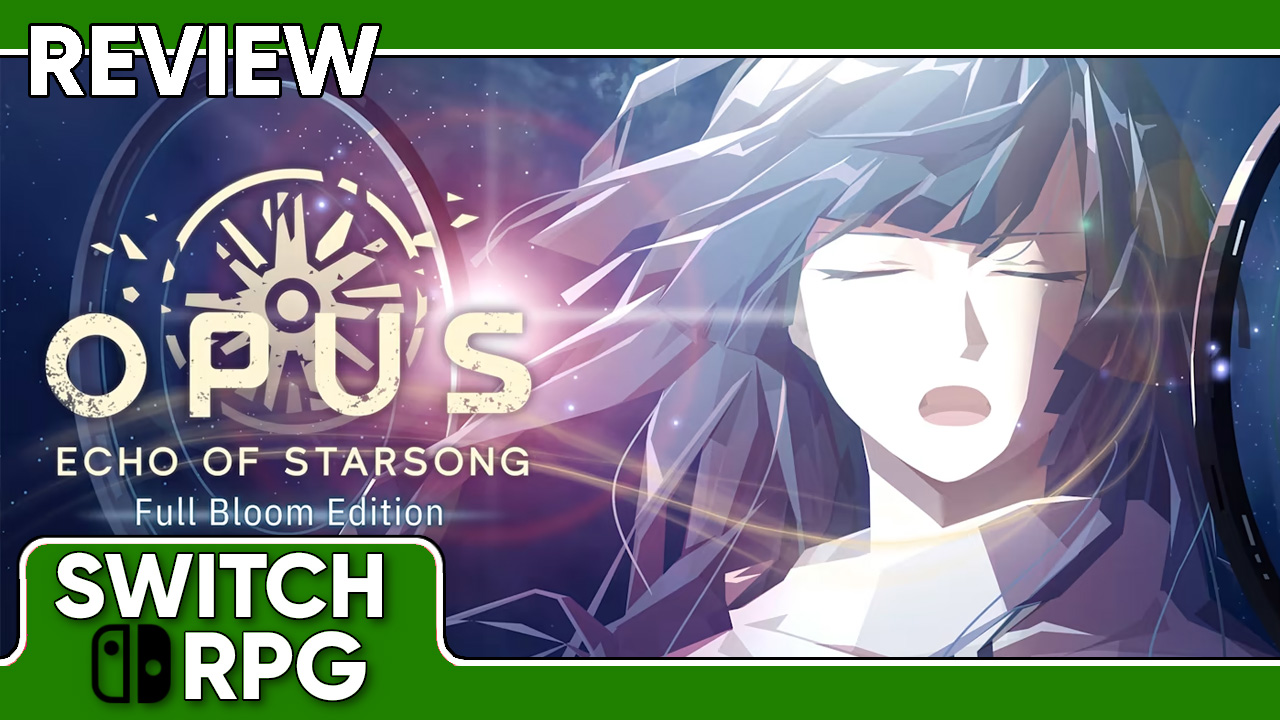 We all meet a variety of people through the span of our lives. Some people flow in and out while others leave a lasting impact that comes to affect us in ways that we never imagined. In this game about following your convictions and figuring out the purpose of your life, OPUS: Echo of Starsong promises to take you on a heart-tugging journey through space.

OPUS: Echo of Starsong opens up with an old man slowly making his way through a deserted cave, seemingly on a mission to discover something. You find quickly that this is the main playable character of the story, Jun Lee. From there, you are transported back about 66 years into the past to relive his quintessential moments with a young witch known as Eda. Their first meeting is less than spectacular, with Jun immediately getting on Eda’s bad side. And yet, Jun seems to feel some sort of obligation to help her, as the information that both of them were interested in appears to be fake (although Eda doesn’t appear to know this). 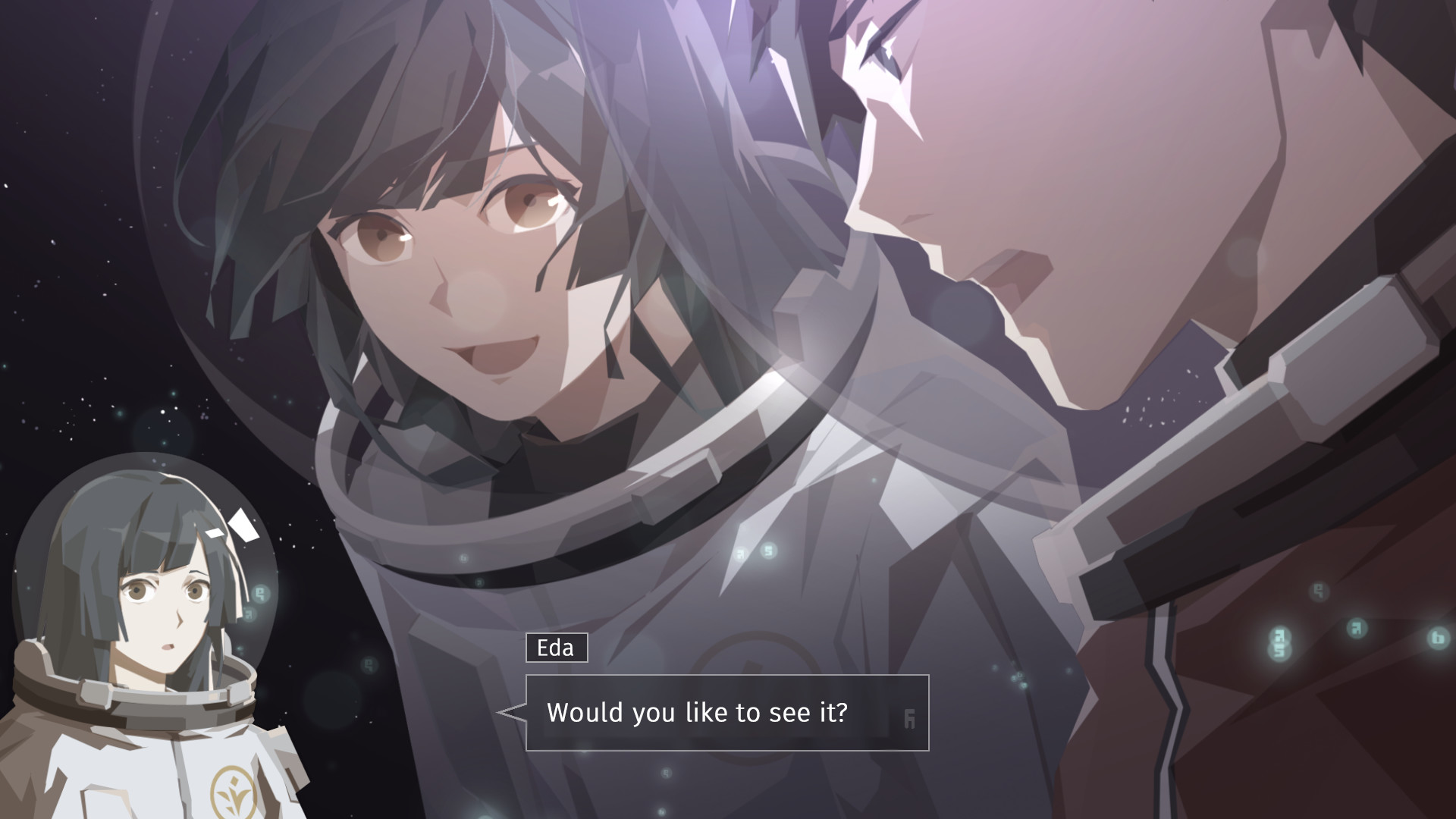 OPUS: Echos of Starsong takes place in the solar system known as Thousand Peaks. It’s currently in the process of building itself back up after the 20-year long Lumen War. Piracy and illegal excavation are on the rise, although mega corporation United Mining appears to be stepping in with new legislation to try and curb the burden of lumen explorers and pirates. There is quite a bit of lore, not just about Thousand Peaks in general, but about the war, the religion, and the people that live there as well. It builds the story out in a way that’s interesting and makes it much larger than just Jun and Eda. 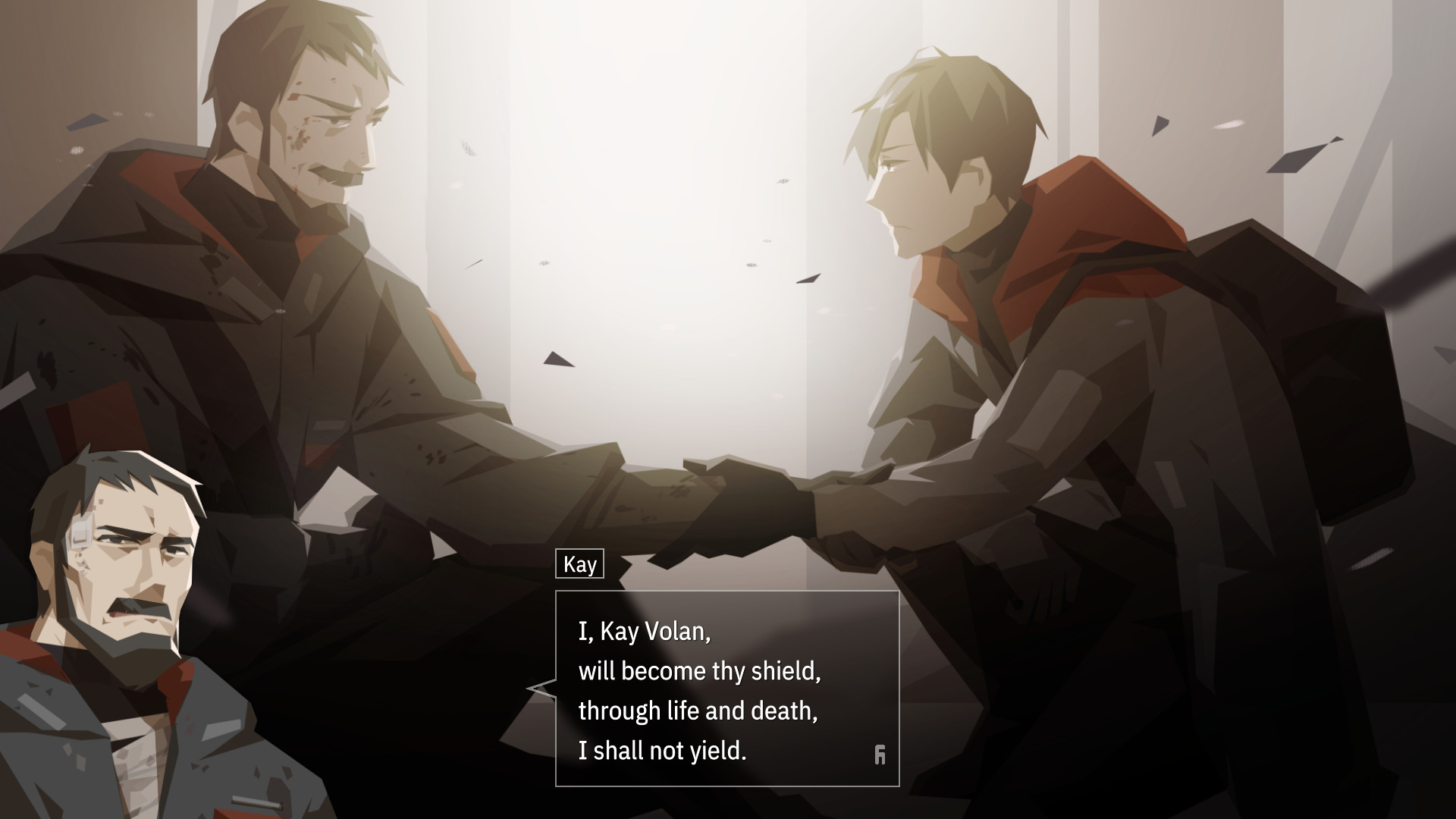 There’s only one ending, but you’ll discover that there are many collectibles to find during your journey through OPUS: Echo of Starsong. While these collectibles won’t affect what you see at the end, they can help to fill in any gaps concerning character relationships, feelings, and personality, if you decide to spend time reading the little blurbs when examining the items. There are also side quests, although they tend to be more low key. There isn’t a system to see which locations will give you side quests, but if a character is looking for a specific item or information, they do make it apparent to the player. And if you don’t happen to have the item they’re looking for, you can always come back to the location later.

OPUS: Echo of Starsong is a puzzle adventure game with RPG elements mixed in, told in the form of a visual novel. While exploring the different caves and vessels of Thousand Peaks, you can control Jun on a 2.5D plane, interacting with items and characters in the environment. While you’re flying around in space, you can select which locations to explore, with random events appearing that require you to perform an action, the result of which is decided by dice rolls.

Once you get into the meat of the game, you’ll start picking up coordinates that will unlock new areas to explore. In order to be able to use those coordinates, you’ll need to be in range of the area to show the exact location of the destination. Once the destination has been made apparent, you can fly your ship there. Along the way, you’ll also see abnormal and abandoned points that can be explored as well. These points can give item drops, either that can be sold for money or can be used to upgrade your ship. 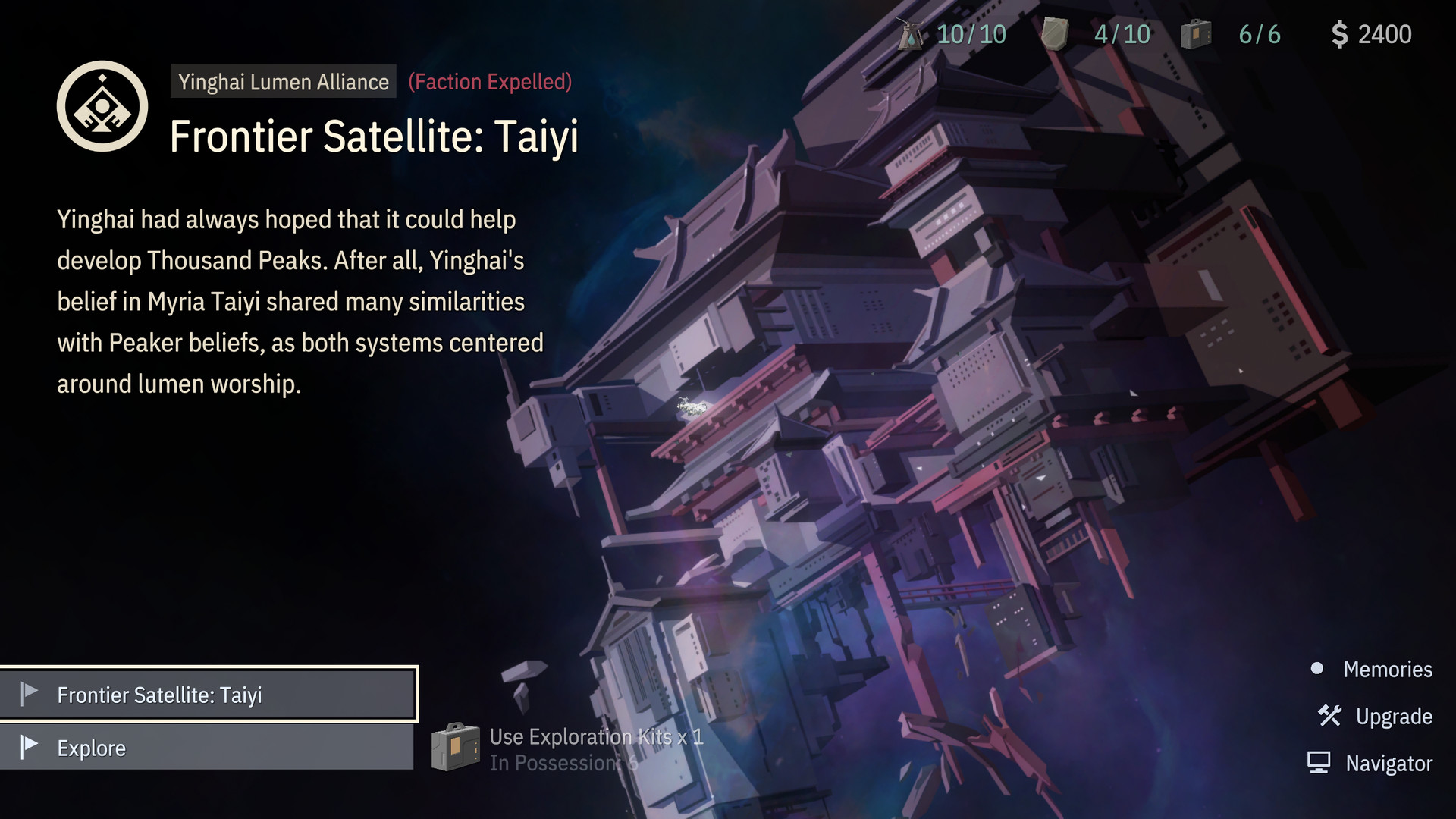 Your ship has three different stats that can be upgraded as you progress in OPUS: Echo of Starsong: armor, fuel, and exploration kits. Armor and fuel do pretty much as described: shows the health of your ship and how much fuel you have currently. Exploration kits are needed to explore abnormal and abandoned points. If you don’t have any, you won’t be able to explore those points and gain items. Along with upgrading the maximum of all three of these stats, you can also “heal” these stats by navigating to any city nearby that has a shop.

You’ll want to keep an eye on your fuel especially, as once you run out, you’ll be stuck floating in space. This can end up with you either being rescued if you’re lucky, or receiving a game over and having to reload. 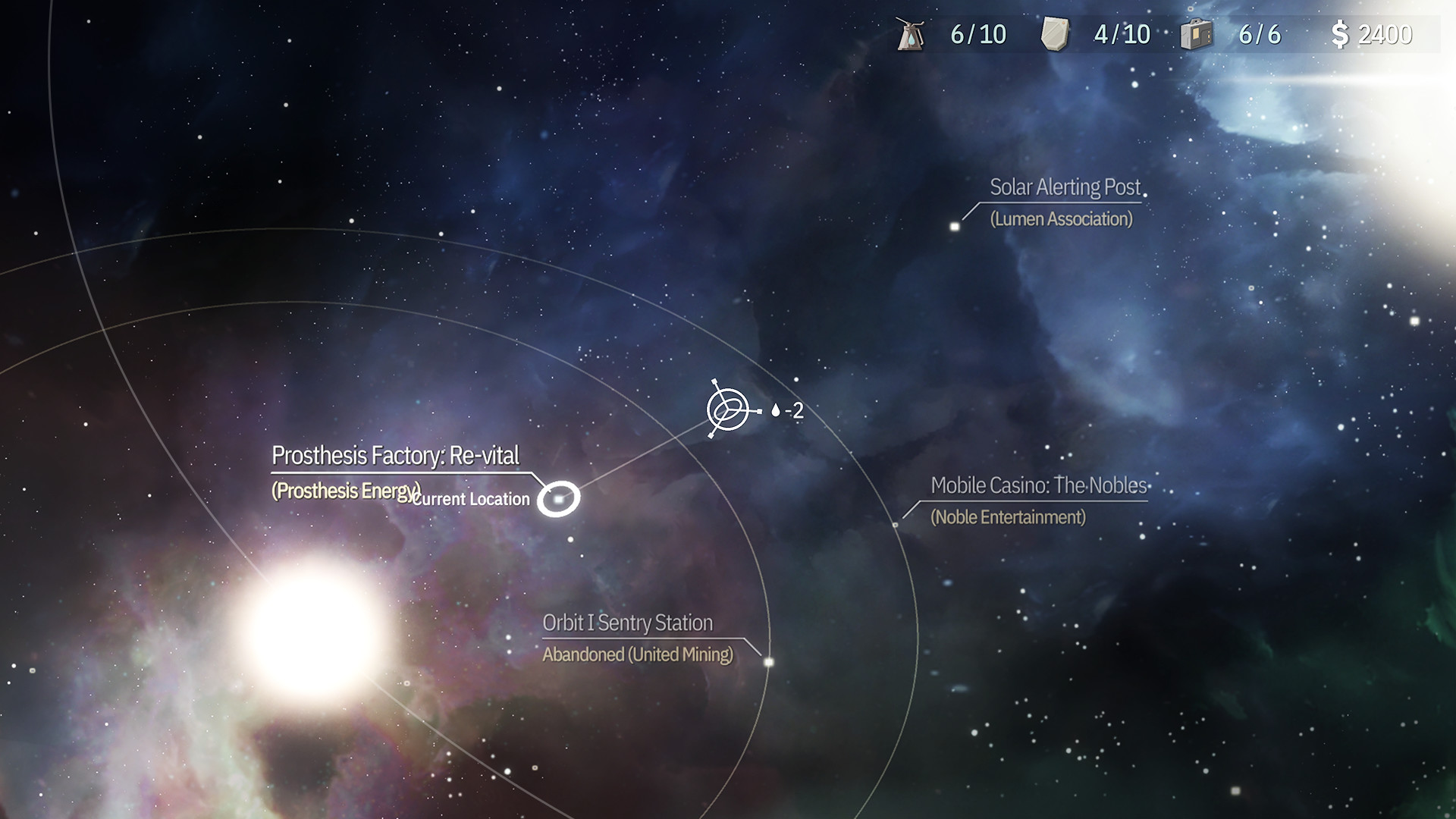 As you explore, you’ll end up coming upon several scenarios where a dice roll determines what happens to you. The actual scenarios do end up being repetitive after a point, whether you’re running into pirates or United Mining military personnel. Your choices usually boil down to disguising yourself as one of the enemy ships or attempting to run away. Either way, you’ll perform a dice roll to see whether you succeed or fail. Failure will usually result in losing some of your armor stat. While you’re shopping, you’ll notice some character specific items that can be picked up that can boost your dice roll stats, which can make those encounters less harrowing.

All of the puzzles that you’ll encounter will be located in caves and vessels that are floating in Thousand Peaks. A majority will be related to Starsongs, which are small recordings of witch’s songs. Jun is not a witch, so he makes use of his Reso-scanner, which can record and play Starsongs. You’ll come across huge gates that require Starsongs to be played in order for the door to open. Only the corresponding Starsong for that cave can be used, but it’s very obvious which one to pick from the collection that you slowly gain. From here, you’ll see the lines of the Starsong appear and you have to match up the lines with the etchings on the door in order to open it. It can be a bit confusing to catch onto at first, but once you get the hang of it, it can be simple to figure out. The only minor frustration at that point comes from how precise you have to be at times. 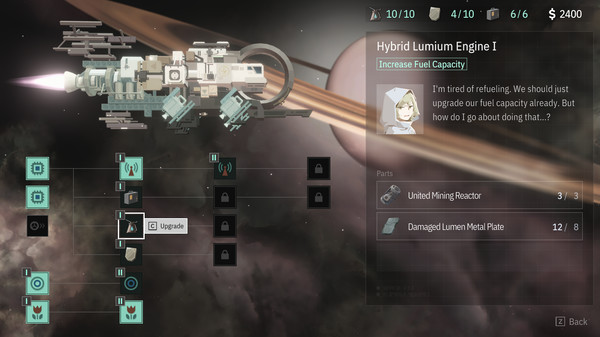 Starsongs are also used to pinpoint locations that you receive from coordinate tips. Once you’re in the vicinity of a coordinate, Eda will record a Starsong to locate the cave. In this case, you’ll see a variety of glowing lights. You just have to locate the light that is emitting the loudest sound. After the Starsong has been recorded, the exact location will appear on your map.

OPUS: Echo of Starsong uses a mixture of 3D models for characters and ships, while using 2D art for character sprites and cutscene images. While the 3D models compared to other games are not as detailed, there’s a lot of charm in their simplicity. The way that the lighting and particle effects work in particular makes each location breathtaking. The glowing of the lumen makes for an otherworldly atmosphere. The same can be said for the art style of the 2D pieces. It feels as though there’s a polygonal inspiration that is a nice touch and not a style which is seen a lot. 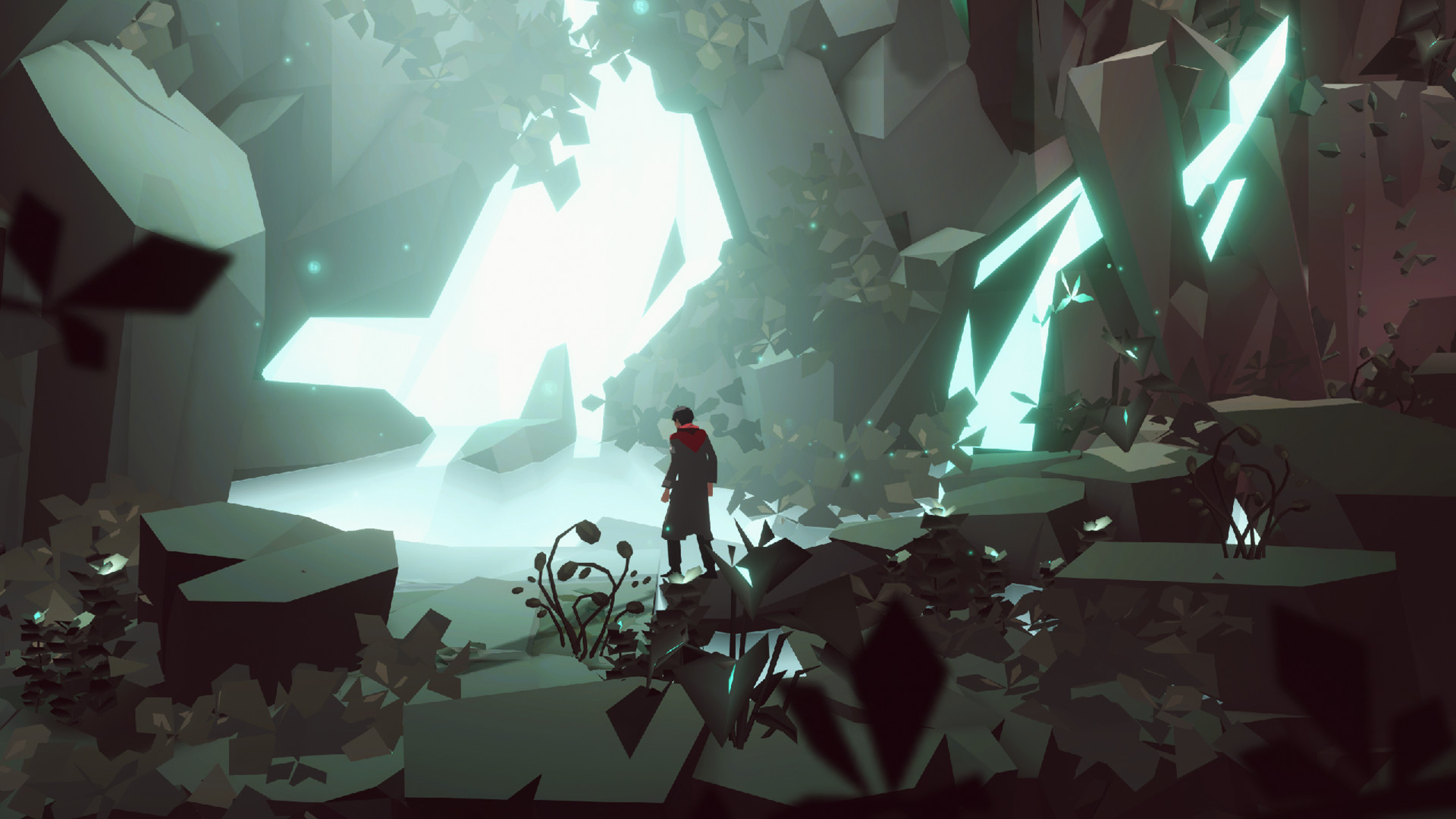 The music is slow-paced, with a mixture of slow piano, string, and orchestral pieces. And because a majority of the tracks are slow tunes, that makes the heavier moments really stick with the player. OPUS: Echo of Starsong is an emotional game first and foremost and its soundtrack plays into that.

In this release of the game, OPUS: Echo of Starsong adds voice overs to the majority of text (primarily, the cutscenes). You can choose from either Japanese or Mandarin Chinese for the voice over, or you can disable them entirely. You can also toggle the voice of specific characters, which is something that I’ve never seen offered before.

OPUS: Echo of Starsong is a beautiful tale about finding your way through life. It’s not all roses and gumdrops. Jun, Eda, Remi, and many other characters in the cast will constantly show their frustrating sides. But you can also see how much they care for one another and the themes of life and death play heavily throughout the entire story. The gameplay is engaging enough to bring you into this world, although you may reach a point where things don’t quite change, which probably won’t be appealing for those looking for intricate systems.

The presentation is another strong point for OPUS: Echo of Starsong. The music and art is gorgeous and really adds to the atmosphere of the game. And the later addition of voice acting was a great choice to bring a lot of character to this game. Overall, this is definitely a title worth looking into.