The holiday season is great for multiple reasons: spending time with friends, family, consuming lots of groceries, and everyone’s favorite pastime – gift exchange! For the 2019 end-of-year festivities, I was fortunate enough to acquire some eShop credit, and I figured, “what better time to pick up some long, personally overlooked Switch titles?” That brings us to today’s topic – One More Dungeon – a roguelike that has built up a gross amount of dust and cobwebs since it was pinned to my wishlist almost two years ago. What is totally bizarre, however, is how much I’ve actually enjoyed this rather unique spin on the subgenre, and maybe you will even be inspired to give it a go once I’ve made my case! 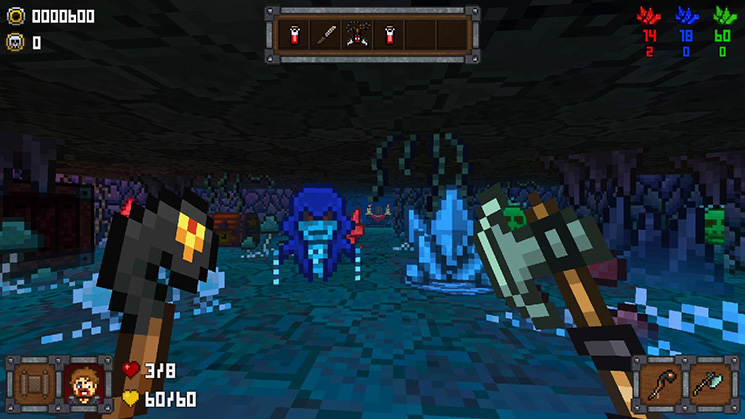 Roguelikes aren’t typically known for their narrative integrity, though many still feature at least a little something to chew on as you’re delving into the endless loops of randomization. One More Dungeon, however, does nothing in that regard, instead opting to put all its eggs in a single basket – that is, the gameplay. While I personally do not take issue with this decision, it can certainly be seen as problematic to those looking for at least a smidge of storytelling to go along with their endless romp.

What sets One More Dungeon apart from the average roguelike is its first-person, three-dimensional perspective, and real-time combat and exploration. Although these elements have been utilized in of a roguelike previously, they are certainly uncommon, and work surprisingly well together. The emphasis on real-time action from the first-person perspective makes it feel like you’re playing an early FPS like Wolfenstein 3D or DOOM, a sentiment that applies to both the gameplay and the overall graphical design – more on that shortly. The result is all the things you might expect from a traditional roguelike – random generation, permadeath, loot and monsters galore – behind the guise of something unsuspected, yet ultimately satisfying. 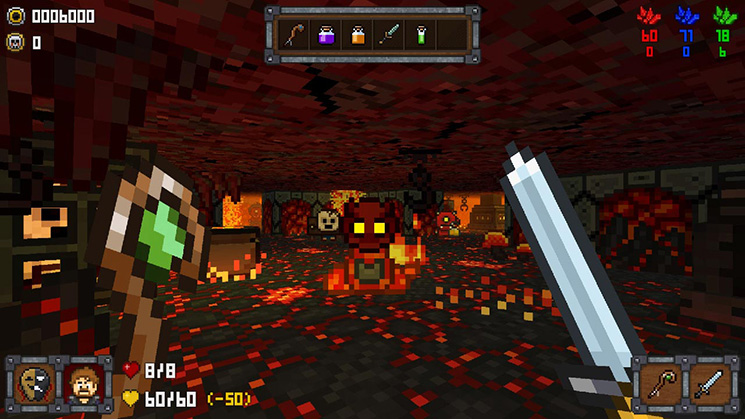 The goal is simple – perhaps too simple; find and defeat the boss of each floor, plunder its key, and hightail it to the next floor. As the player moves about the environment, they are sure to run into some surprises, whether they be of the antagonistic or beneficial variety.

Combat, while relatively simple in design, remains a constant challenge thanks to it being in real-time. There’s always a sense of uneasiness as you move into unexplored territory. The pitter-patter of enemy advancements can be heard sometimes, but not always, while other fiends bide their time, hiding away in unsuspecting crates, which can conversely be filled with useful player resources. The player must keep their wits about them at all times, and will want to keep their melee, ranged, artefact, and consumable resources within an arm’s reach at any moment. Equipment comes in a number of varieties and tiers, leading to a relatively steady stream of character progression despite the lack of a traditional character level system. Besides the obvious stat differences, weapons are unique from one another – melee weapons, like daggers, are much quicker than the likes of an axe or polearm, but at the expense of less total damage per hit.

Wands serve as your ranged weapons, and all share a similar attack speed despite the drastic differences in their actual effects. Unlike melee strikes, which can be performed for free, wands consume crystals that can be found scattered about each level, purchased at key locations, or received by grinding up old, unwanted gear at the proper stations. 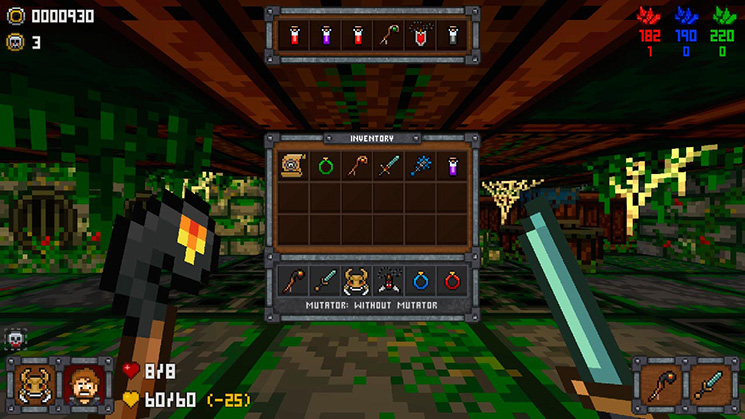 Artefacts are exceptionally powerful items that come with steep caveats: their usage drains your sanity. The player’s vitals consist of health points and mind points, with the latter fueling the sanity system. Drop below 20 sanity, and the player will start seeing things that aren’t really there, like the particularly vicious void fiends.

There is a nice ebb and flow to this system that allows one to take advantage of incredible boons so long as you remain conscious of your current sanity level. Mind points are recovered through breaking certain objects, vanquishing foes, and consumables. Mutations, or game modifiers, can be unlocked as you accrue points across runs, which does nudge the game towards being a roguelite. Once acquired, up to two can be applied to any game and can alter the overall experience. Some of the mutations are helpful, such as giving you additional base health or halving the health of enemies, though most of them further increase the challenge the game has to offer – crazy, since it already offers a steep challenge at a base level (or, more likely, I just suck).

One More Dungeon offers an exceptional challenge even with the beneficial mutations added, so there is lots of room for true thrillseekers and hardcore roguelike veterans to really get a genuinely punishing – yet rewarding – loop going. It doesn’t do anything crazy gameplay-wise – it really is quite basic at face value – but if you are a fan of roguelikes, RPG elements, and early FPSes, you have a lot to look forward to. 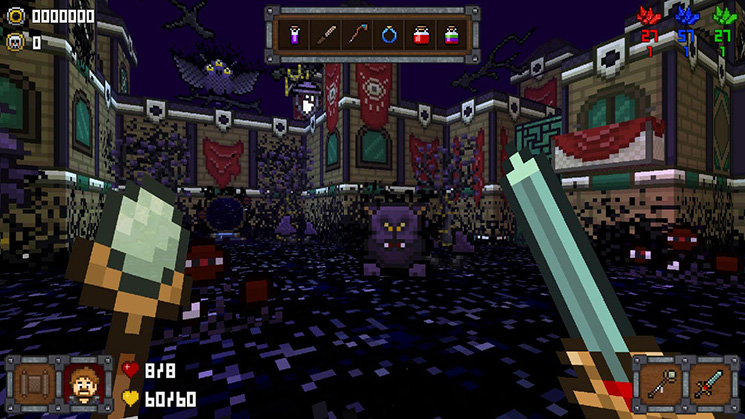 I believe that true-to-form roguelikes should exude an atmosphere that best represents the genre: claustrophobic rooms and corridors, unending dread, and dilapidated dungeons. One More Dungeon checks all of those boxes, and amplifies it thanks to its exceptional pixel art and nods to the forefathers of the FPS genre – it even has a Doomguy-esque portrait that animates and changes with the player’s current health level. Secrets can populate each floor, making the whole affair feel almost like you’re storming Castle Wolfenstein as B.J. Blazkowicz – sans the Nazi references, of course.

The overall look and feel of floors change drastically every two levels in order to keep things fresh. The player will begin in a relatively standard dungeon, before moving on to a poison-filled cavern, grime-encrusted caves, and even a hellish landscape. The aforementioned artefacts will sporadically lead to another mind-bending dimension itself, full of creepy eye monsters, and dangerous traps. While the sound design isn’t quite up to the same level as everything else, it still receives a passing grade.

One More Dungeon really took me by surprise, not because of crazy innovation, but for embracing older design concepts in a unique way. Certainly, if you aren’t a fan of early first-person shooters – and the potential technical flaws (ie. controls) that come with them – then this might not be for you. Though the package might feel a tad sterile from a mechanical standpoint, I feel that the change of pace and perspective counterbalances it nicely. The end result works, and I’d love to see more games in the same vein as One More Dungeon come to Switch in the future.