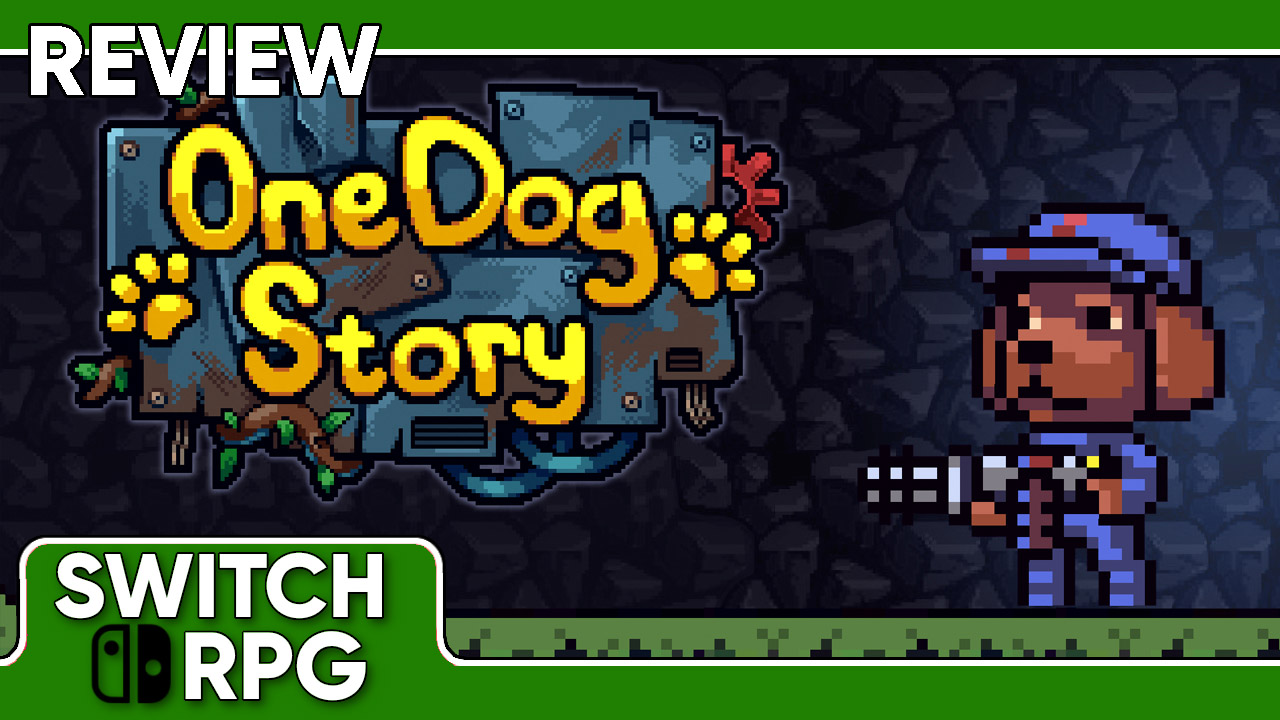 Ah, the dog. Man’s best friend that is always at their beck and call, their companion through any trouble or hardship, and also, apparently, a willing test subject for maniacal scientists. One Dog Story follows E0-43, an anthropomorphic dog, as he slowly comes to grips with his new reality. 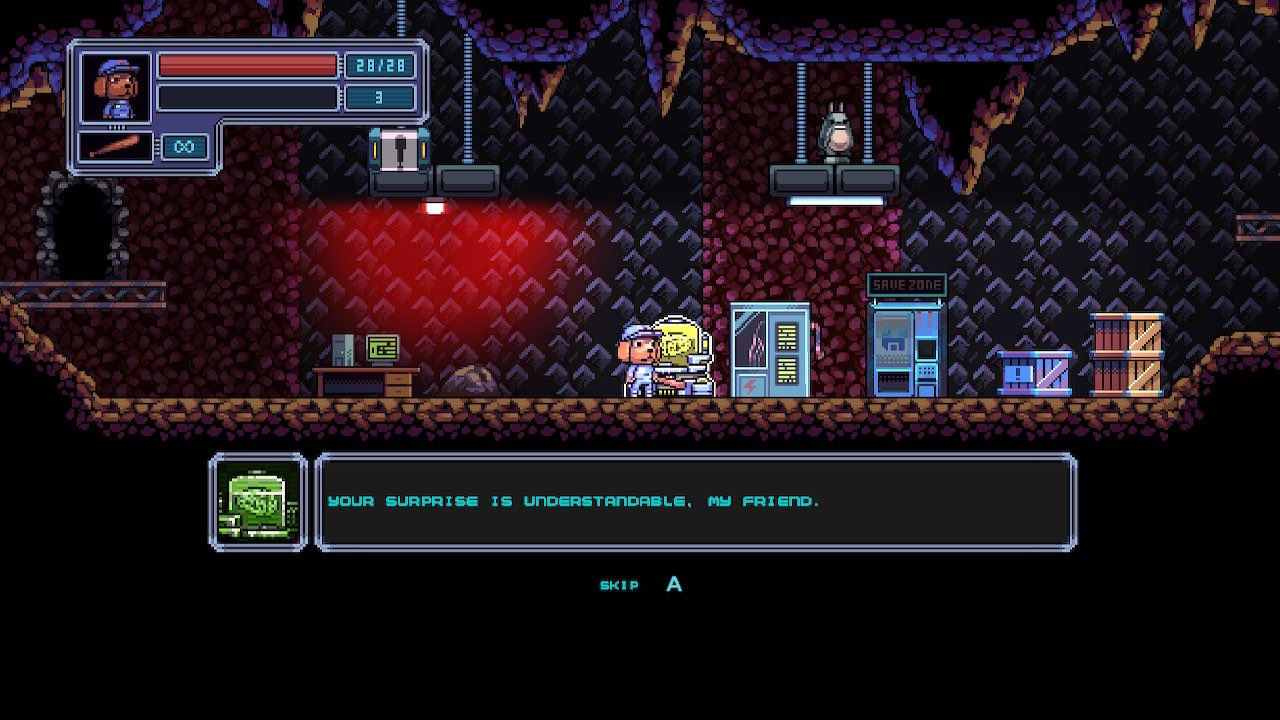 Years ago, there was an accident on the surface, leading civilization to hunker down in underground bunkers. Among those underground were many scientists, one of which brought their furry companion along for the journey. While it isn’t exactly clear how or why E0-43 is now a gun-toting, upright canine, occasional flashbacks prior to the opening bunker incident – separate from the surface catastrophe – suggests that he was, in fact, free of genetic mutations at some point, and that his now missing master was once invested in his life. Waking up alone, face down in the liquid he was once suspended in, E0-43 sets off to discover what has happened, find his owner, and perhaps uncover why he was experimented upon in the first place.

One Dog Story does a great job of setting up an interesting premise, stringing along the player via occasional story bits through various NPCs, as well as from notes on computers spread throughout the complex. Something has definitely gone wrong here, and there’s a sense of unease that remains constant while you slowly tread deeper into the facility. The tension is further amplified by the aforementioned, occasional flashbacks that E0-43 will experience, leading ever-closer to that fateful event that remains fuzzy for him to this day.

For these reasons, it is unfortunate to report that the actual endings aren’t really satisfying. E0-43 will have to make choices along the way that will shape the ultimate outcome of his tale, but none of them (at least the handful I’ve experienced) have really matched up to the strong momentum established prior to the conclusion. With limited saving and rare opportunities for backtracking, it is very easy to lock yourself out of “endings” without resorting to playing through all over again. Although the gameplay will prove a strong point for the game, that alone will likely not be enough for you to want to play it multiple times over. 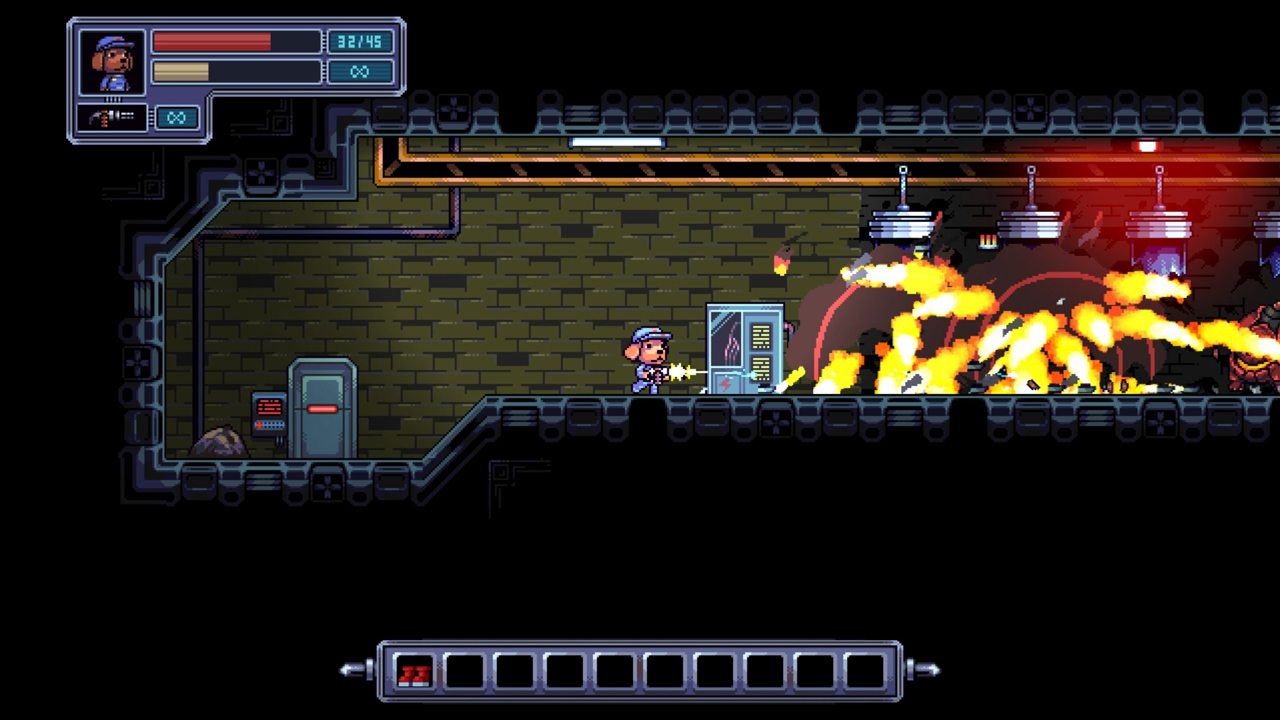 Gameplay-wise, One Dog Story is quite similar to the action platformers of yore, utilizing one-shot mechanics that were once the calling card from a bygone era. Death is inevitable, but fortunately not the end of the world, either. Save terminals are strewn about each area, which will revive you with little penalty save for some time. E0-43 will be exploring each of the many zones, piecing together breadcrumbs of what has happened, making impactful decisions concerning various NPCs and events, and slowly building up a rather impressive arsenal of firearms.

The weapon system is one of the strongest features of One Dog Story due to most of them having a meaningful, long-term purpose throughout the adventure. E0-43 will start off with a mere baseball bat but will eventually carry more impressive arms, such as a rocket launcher and a sawblade thrower (my favorite). Oddly enough, it seems that some weapons are missable depending on current progress, as I once had a rocket launcher in tow, died, couldn’t remember where it was found, proceeded to reach a point of no return, and was unable to venture back to find it! Perhaps the rocket launcher is an exception and was only meant as a temporary weapon, but if not, this is concerning. 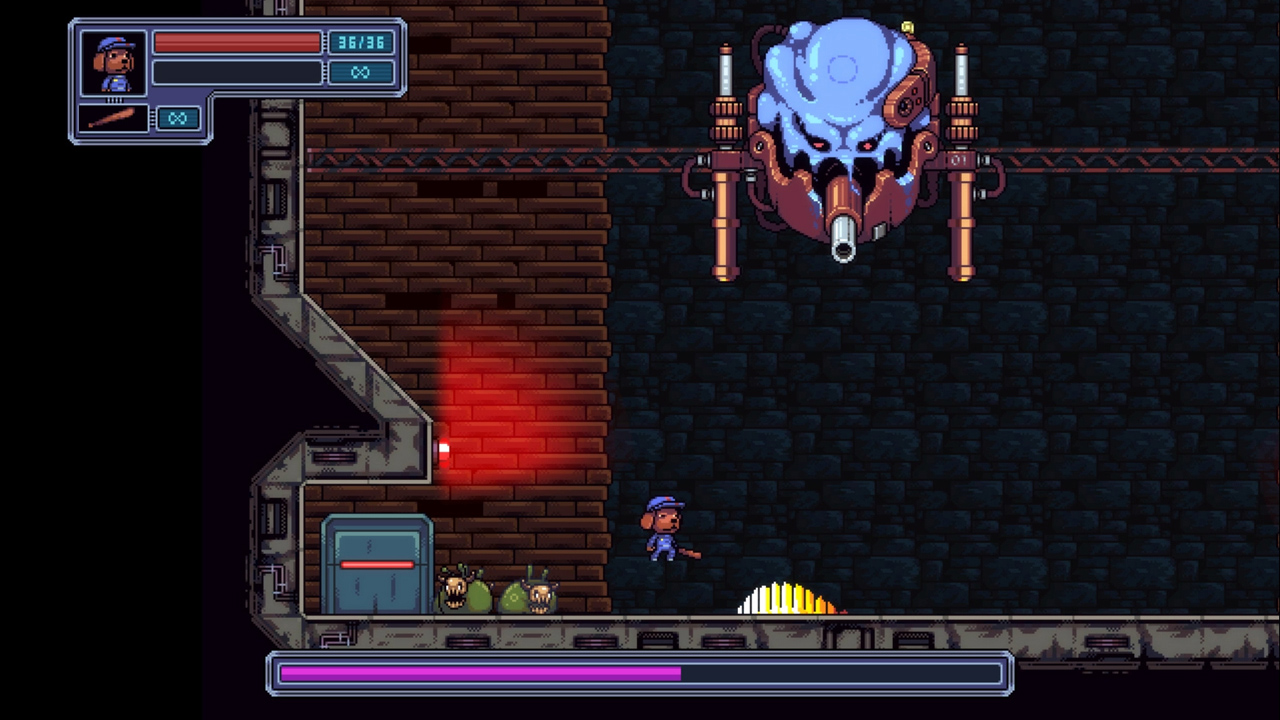 Speaking of no return points, there are many of them. One Dog Story doesn’t feature a map, and there is no way to tell which doors will push you into one of the impassable points, making it very difficult to thoroughly investigate each area unless you know exactly what you’re doing. The game is short enough to consider a repeat playthrough – around five hours – but the whole “no map” deal makes your chances of a repeat “no return” mistake likely in subsequent runs. This wouldn’t even be an issue if these particular points were actually telegraphed to the player, but alas, they aren’t.

As a result, One Dog Story is a fairly linear adventure. There are a few side areas to explore, of course, and even some secrets to be found by “following your nose” (ie. E0-43 can “sniff” his surroundings to highlight false walls in a small radius, which is cute in itself). The moment-to-moment gameplay and drip-fed, intriguing narrative, however, really compensates for some of these downsides. Boss fights can be epic,as well, though their difficulty varies greatly. 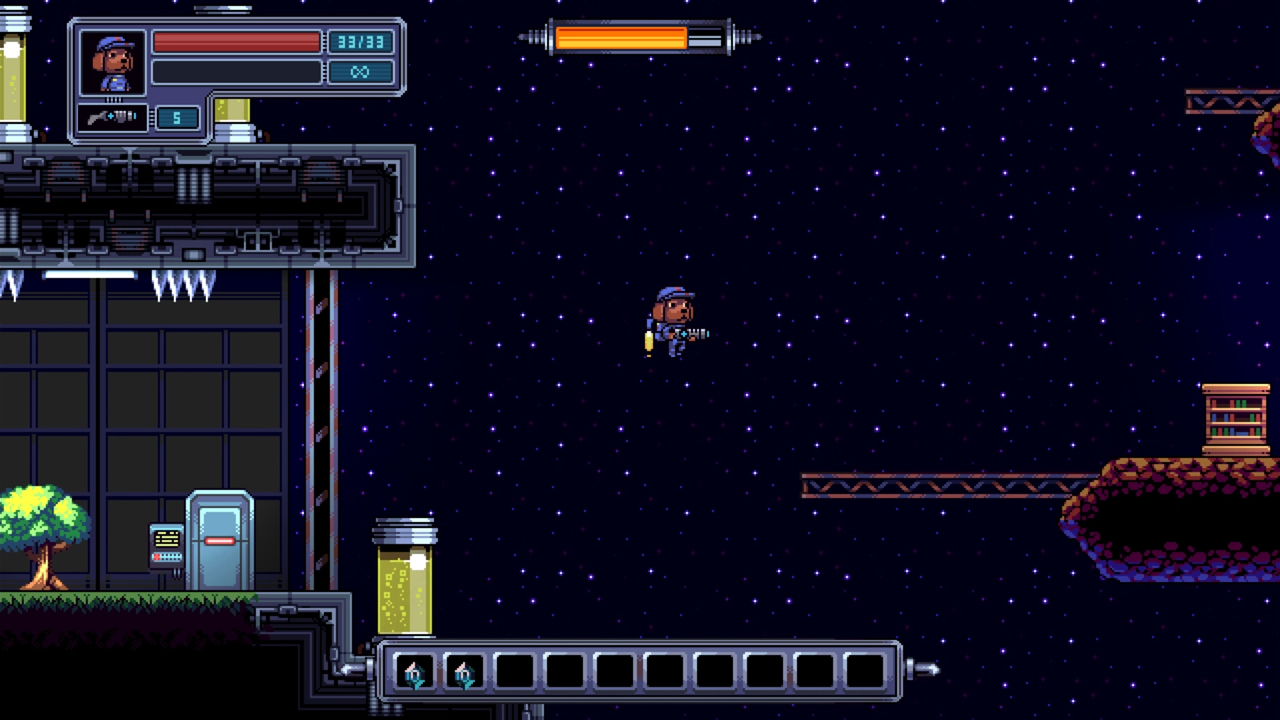 One Dog Story further bolsters its gameplay with a tight, retro-inspired package. The ominous hums coming from the now abandoned machinery and whispering cavernous drafts constantly remind you that you’re underground, and yes, something has gone terribly wrong. Flickering fluorescent lights and now defunct cameras remind you that this was once an impressive – now dilapidated – facility. The grotesque creatures skittering about suggest that dogs may not have been the only thing that was experimented on, either. Of course, who can forget about our canine, sawblade-launching protagonist? If you’re a fan of SNES-era pixel art, then there’s a lot to appreciate here. The only real downside with the presentation is the jumping sound effect, which feels completely out of place and quickly becomes annoying.

One Dog Story comes out of the gate white-hot, impressing on all fronts, but becomes increasingly flawed as you go. In ways, it feels as if a war is raging between the game encouraging exploration, and punishing it, with the end result being a somewhat disappointing mix of both. The lackluster endings doesn’t do the replayability factors any favors either – at least as far as the ones I’ve experienced myself. The only exception to the progressive flaw rule would be the gunplay, which does feel better as you acquire more powerful loot, including a double jump and a jetpack! The only concern here is, again, the potential to miss certain weapons entirely (ie. my rocket launcher scenario), but feels solid outside of that.

Ultimately, One Dog Story feels a tad expensive when considering all flaws, but still may be worth a gander if you are a diehard platforming fan, are able to pick it up on sale, and aren’t emotionally invested in the fate of genetically modified dogs (thus aren’t expecting a primo narrative).