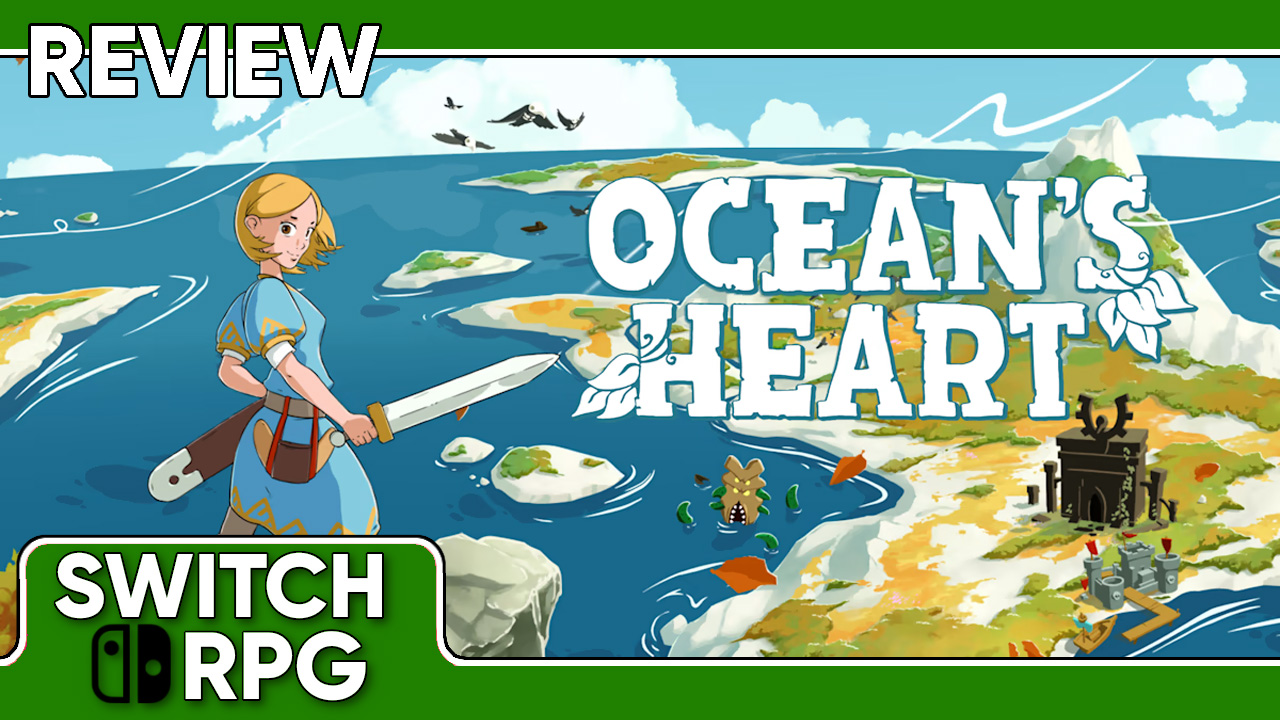 There is no shortage of Zelda-inspired or “Zelda-like” games on the Nintendo Switch, and Ocean’s Heart is only the latest one in that vein I’ve played. One key thing these types of games must show is that they understand the formula, and can iterate on it while adding their own deviations to make it feel unique. We have seen many standout indies that have been able to successfully pull off the “Zelda-like” claim, such as Blossom Tales, Oceanhorn, Death’s Door, etc. Let’s find out where Ocean’s Heart stands in that hierarchy. 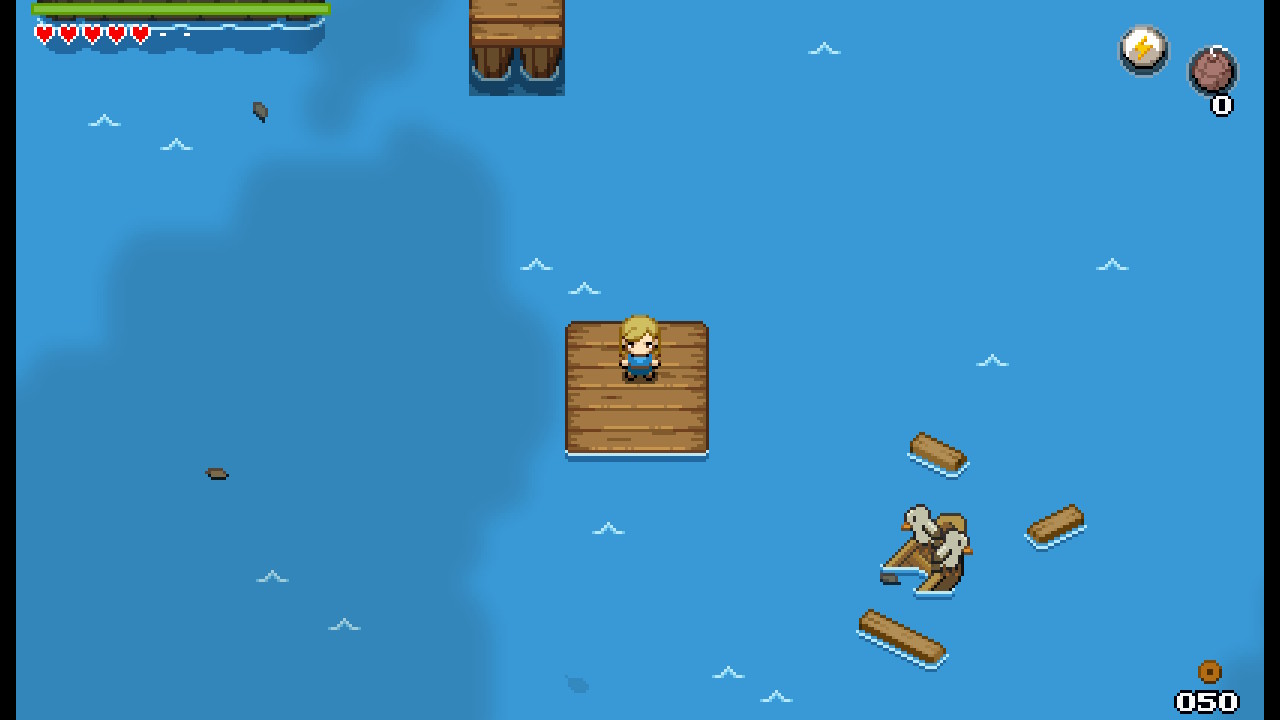 Ocean’s Heart begins with Tilia, a Volunteer Navy member in training, who is tasked with a short fetch quest. Your father asks you to get some whiskey for his bar, Limestone. As has become the norm with “Zelda-like” games, you start off without a weapon and that becomes an issue trying to get the whiskey as you can’t get by a certain tree blocking the path. While Tilia is away getting the whiskey, her village is attacked by pirates and her best friend, Hazel, is taken.

Tilia’s father, who is the village’s Volunteer Navy member, sets out after Blackbeard and the pirates in hopes of rescuing Hazel. After hearing nothing from her father for some time, Tilia decides to set out and find both her father and Hazel. As you search for them, you come to learn about the Ocean’s Heart – a sword. The story, which is very straightforward, is about rescuing your father and friend while also beating Blackbeard to find the Ocean’s Heart. 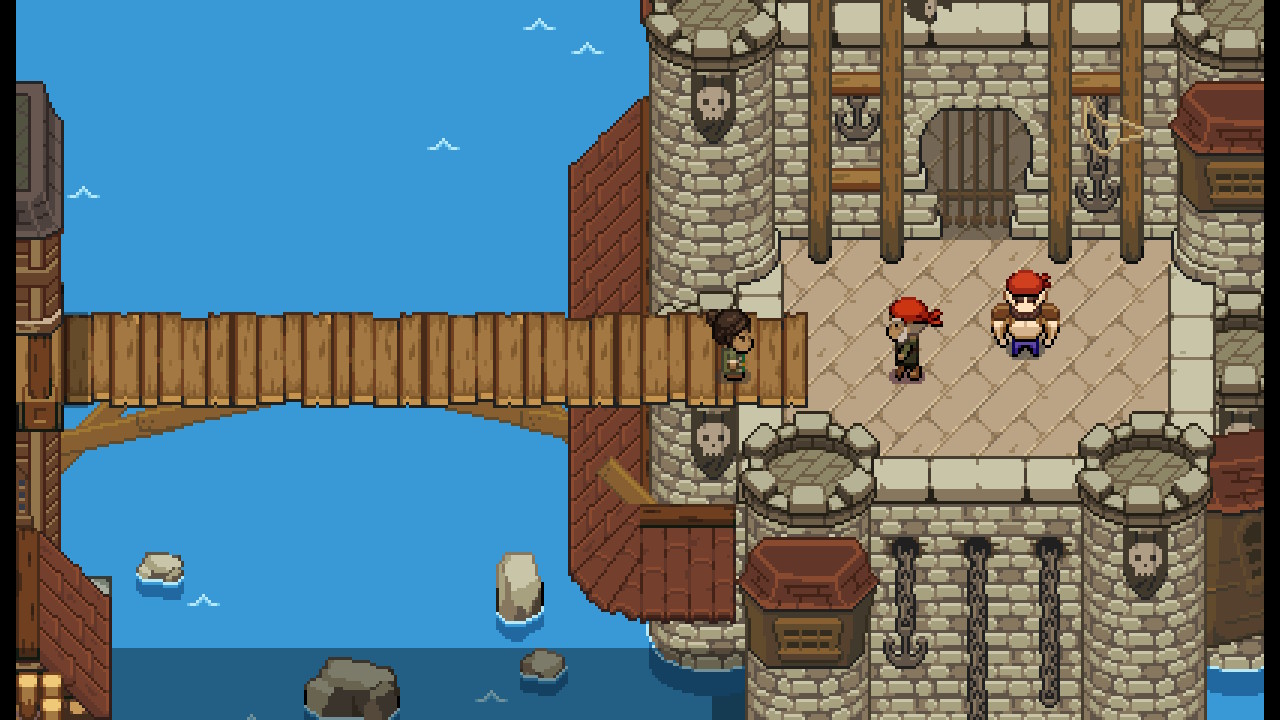 I don’t want to spoil anymore of the story so here’s the verdict: while it is okay, I would have liked to see more twists along the way. There is plenty of dialogue and side quests to do which aid in worldbuilding, but just don’t expect anything unexpected to happen. 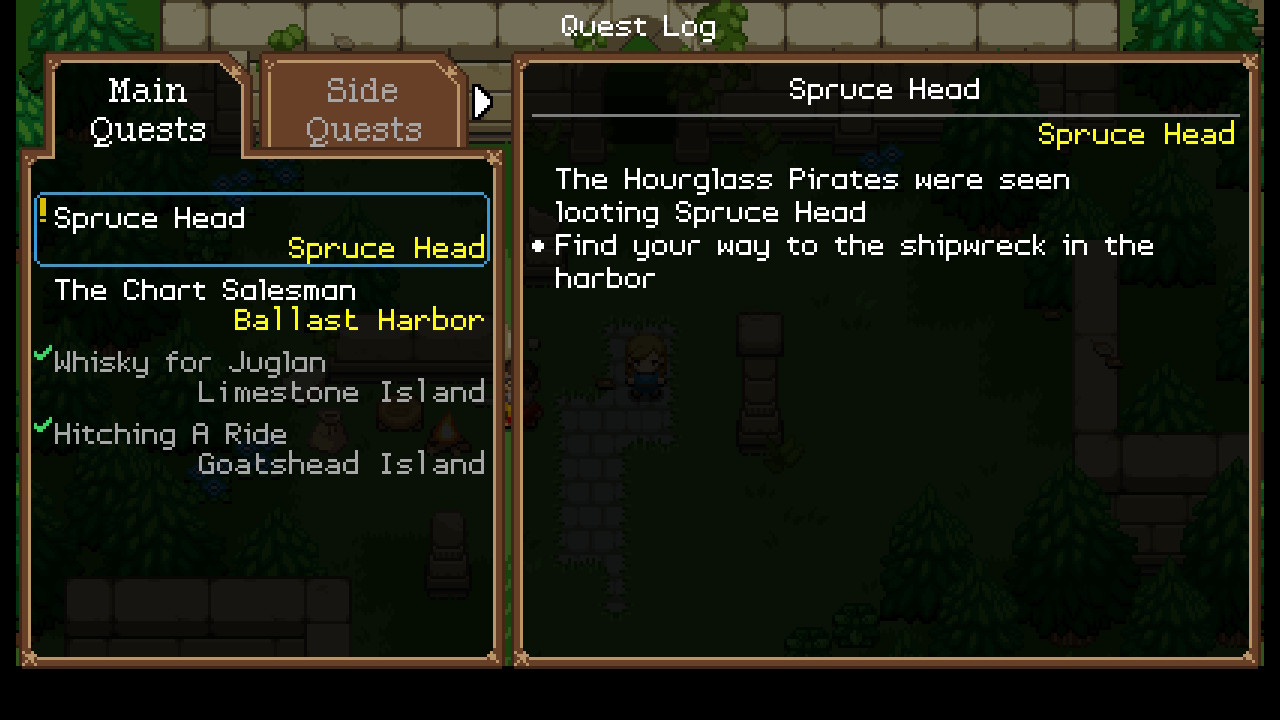 Ocean’s Heart plays like you would expect any “Zelda-like” to play. You have your sword and dodge/roll assigned to two of the face buttons and can equip two of the other various items you have acquired to the others. You can equip traditional items such as a bow, bombs, flail, or various magic spells. This customization provides a lot of flexibility so you can set up Tilia to your play style or adjust on-the-fly to the dungeon or puzzles at hand.

The combat for the most part is very straightforward and if you have played other “Zelda-like” games before will feel very familiar. I did find some scenarios to feel a little spongy and the shield-based spell to be a bit overpowered. Enemy drops play an integral role in crafting. You can craft healing items and other boons to assist with boss battles, which can be especially useful early on. 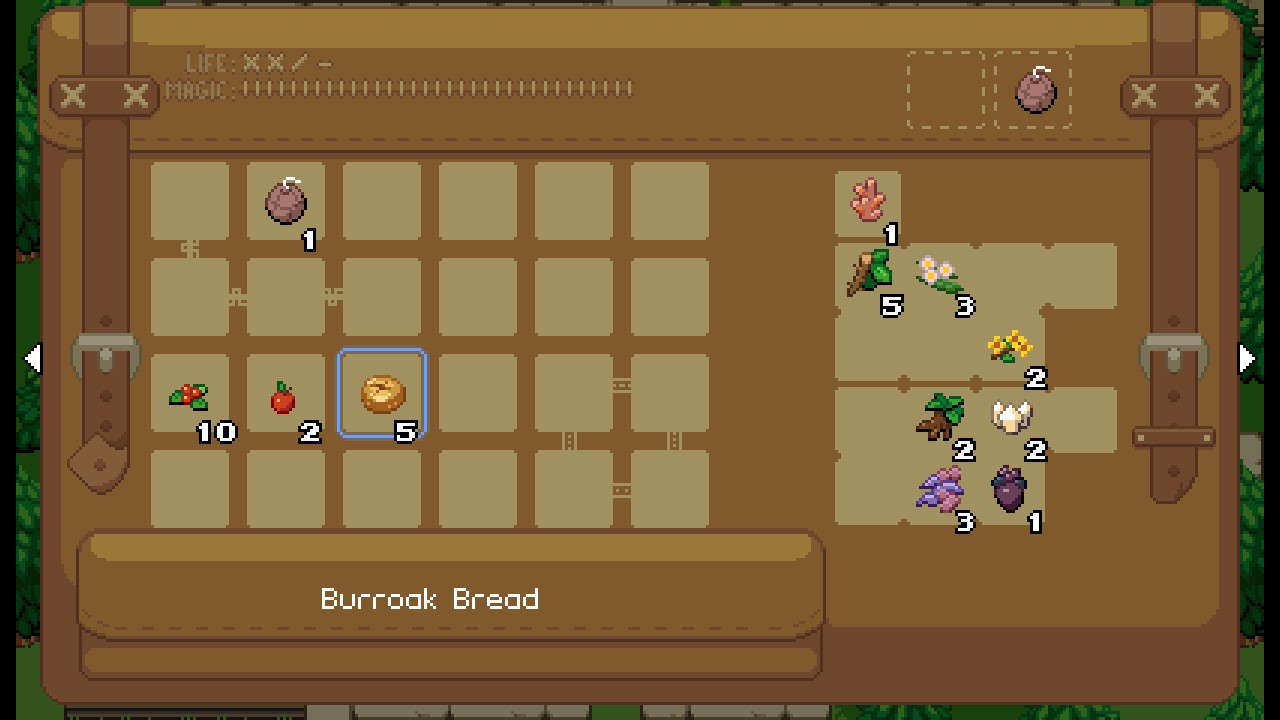 Each dungeon follows a familiar format: standard enemies, some mini-boss encounters, minor puzzles, a major item, and that coveted boss key. Unfortunately, major items here didn’t feel as significant as they do in other games of this type. Getting to each dungeon usually requires you to sail from one area of the world to another, and sadly, the sailing is more like fast travel rather than something with actual depth, such as its representation in Windwaker. On the topic of depth, I would have liked to have seen more of it overall, particularly with the map system. The overworld having a more detailed map and each dungeon having a map would have definitely been nice.

The side quests are one of the game’s brightest spots as they are well written, have variety, and their rewards really help Tilia improve her repertoire. One of the rewards is usually coins, which can be hard to come unless found in a chest, but are used to upgrade your sword or defense in town. 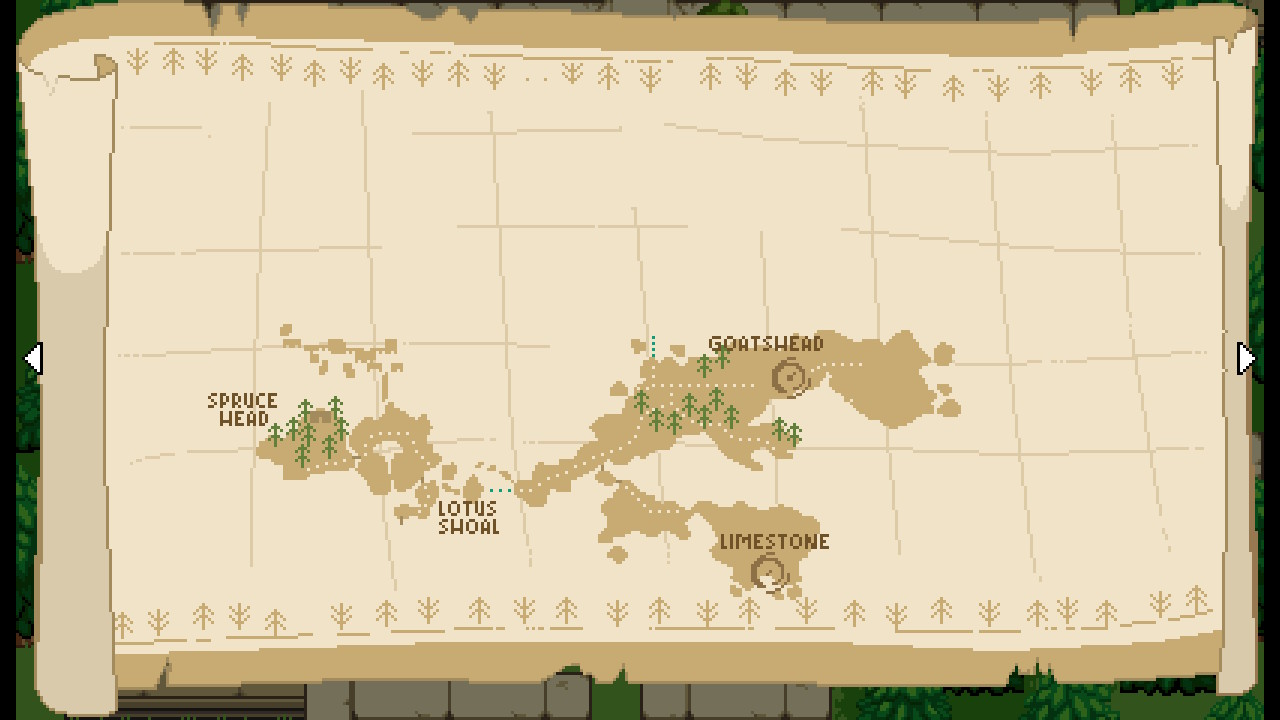 The presentation and performance of Ocean’s Heart represents some of the best and worst the game has to offer. It is visually stunning, and the pixel art is done well. As you explore the world, each area’s sights and sounds are well crafted and vary enough to feel unique while at the same time fitting the overarching theme that I feel the developers set out to create.

My biggest complaint stems from spotty performance, especially during boss fights. There are a couple boss fights that have several phases and when the boss gets to its later phases, and has projectiles and zombie arms rising from the ground, I found them to go from strategy to just luck due to performance issues.

At times, it felt like the game was struggling to keep up with everything and would pause for a couple seconds in order to catch up. The unfortunate byproduct of that is not being able to accurately dodge and lead to unavoidable damage. This made for a very frustrating experience and ultimately led me to avoiding some of the optional bosses entirely. 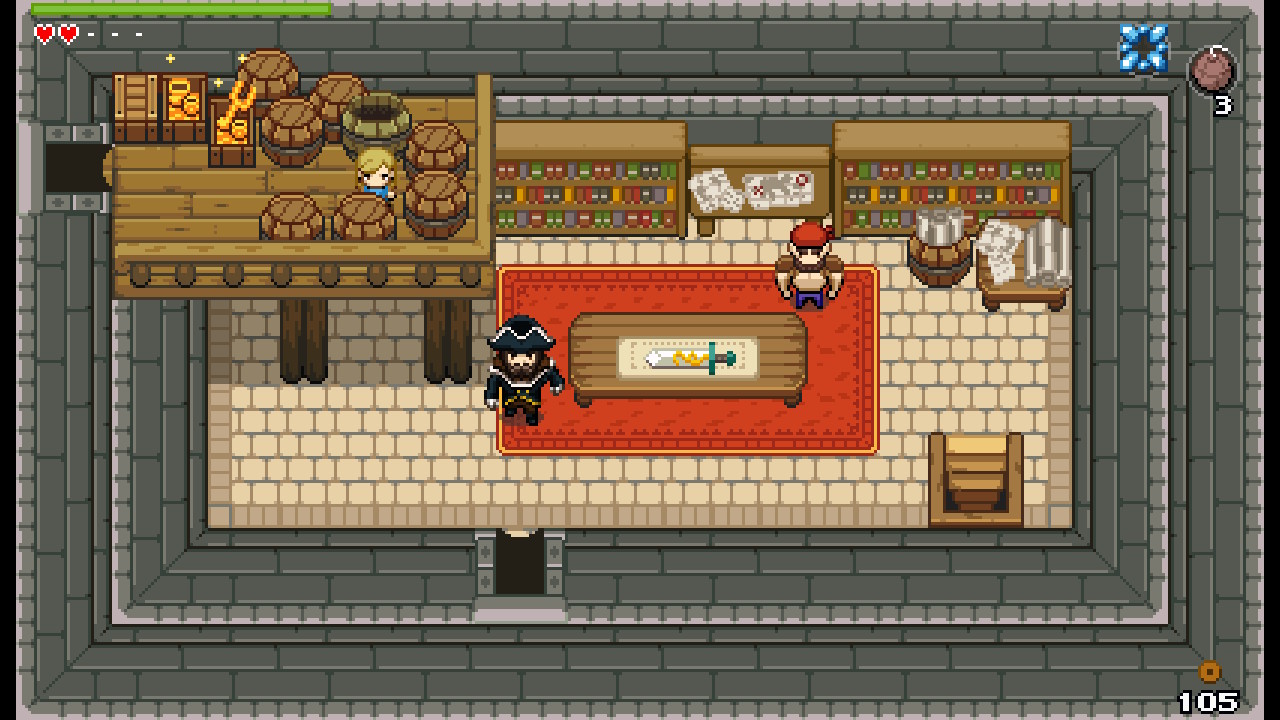 I left Ocean’s Heart heartbroken. There is a lot about this game I like and even more I want to like, but the full execution simply isn’t there. The game sets out to be “Zelda-like” and on paper that is a game genre I adore. While Ocean’s Heart has a basic map, I would have preferred a more detailed one and especially would have liked it to extend to dungeons.

In addition to having some performance issues with bosses, I found some of them to be very damage-spongy and some you could just cheese by using specific magic spells. Lastly, I did notice some control issues/input delay especially when it came to the dodge/roll button as it also acts as the interact button. I often found I would dodge/roll when I wanted to interact with an object or NPC. This results in rolling into a wall or sometimes rolling off a platform and taking damage. 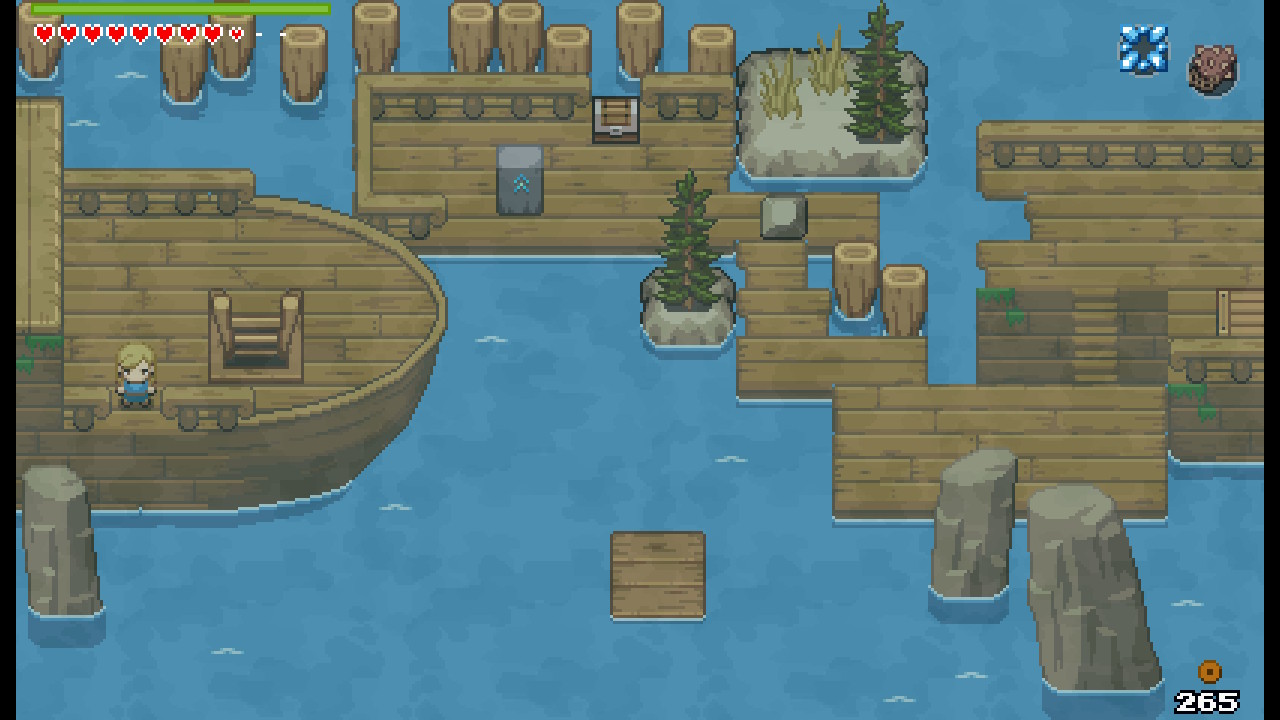 As I said, I am heartbroken because for all its faults, it has many nice qualities. The writing is well done, especially in the side content. There are a lot of optional quests with rewarding items to find and uncover. I didn’t finish all of them and completed the game missing several health upgrades and abilities, but I like games that reward you for exploring and doing all the game has to offer. That said, Ocean’s Heart is a “Zelda-like” through and through – minus the protagonist dressed in green. If you are looking for a new adventure to take on, look no further than Tilia’s quest to find her father, friend, and the Ocean’s Heart.

Great review! Definitely keeping this one backlogged for awhile but at the same time eager to play it based on this review! Lots of great info to know where it stands in my massive library of games.