No Place for Bravery Review (Switch) 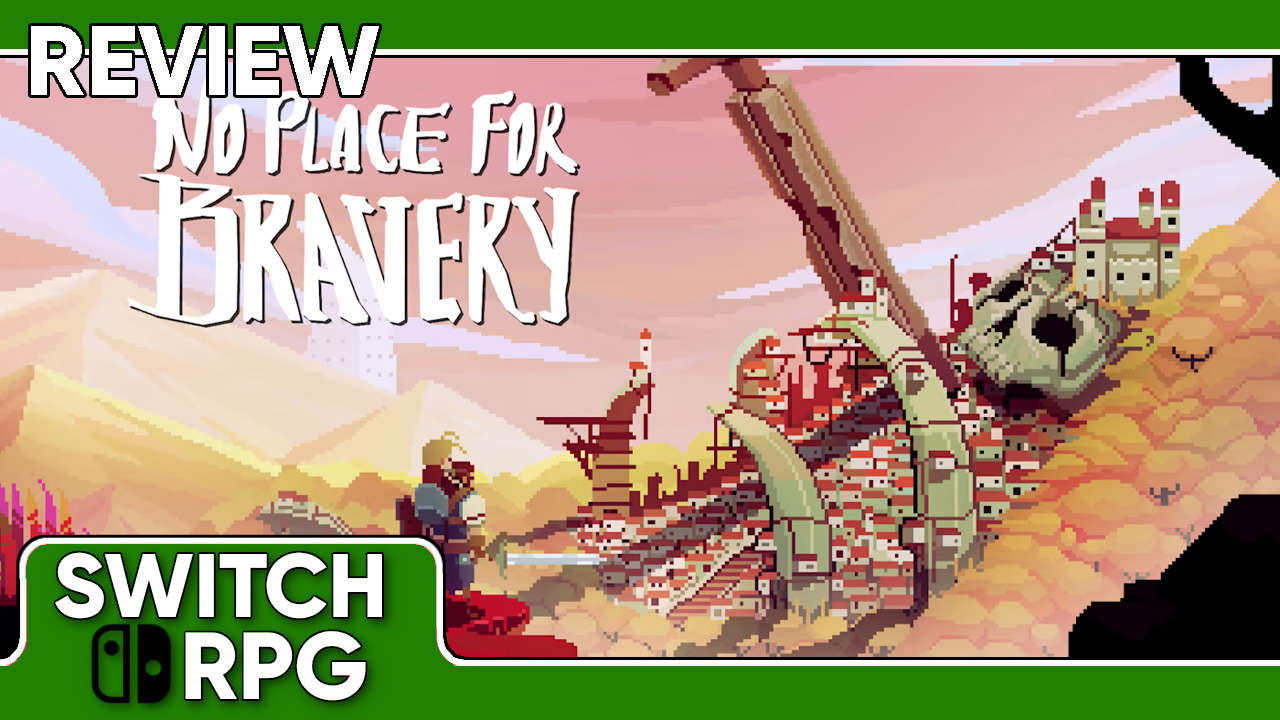 Stamina-based action role-playing games are a dime a dozen these days, especially those that use detailed, pixel art aesthetics. Of course, once one veers into this territory, they run the risk of being labeled as Zelda-likes rather than Souls-likes. And once you start talking about Zelda, you move dangerously close to the “what is an RPG” conversation. And yes, I am going to remind you, dear reader, that Zelda is not one.

So where does a game like No Place For Bravery fall? It has no experience system for leveling or character builds, but it does feature many of the Souls-like tricks of the trade: campfires for saving, precise and punishing combat, and middling platforming. It offers open traversal as the player visits new locales, and isn’t strictly linear in its progression. It has a much more transparent narrative with emphasis placed on its main characters. If none of those elements evoke any interest in you, reader, then consider this: What if I told you No Place For Bravery can be fully experienced by almost any player?

Let’s find out if you fall in that camp, and whether or not it’s a strong enough pitch.

No Place For Bravery stars Thorn, a big, dumb warrior (this is not an insult, he feels this way about himself, too) who has fought many battles and seems kind of tired of the whole cycle of violence. This doesn’t stop him from brutally dismembering enemies, however, as he is quite the proficient fighter. You’ll be able to use stamina-focused light attacks with the Y Button presses and a charged attack via a sustained input, while weapon skills that operate on timed cooldown are mapped to the bumpers for access. Dodging is executed with the B Button, and a fast-access healing palette can be accessed through the ZR trigger. Drawing a shield is performed by holding the X button, and upon obtaining other weapons, you’ll be able to cycle through them using the ZL trigger. 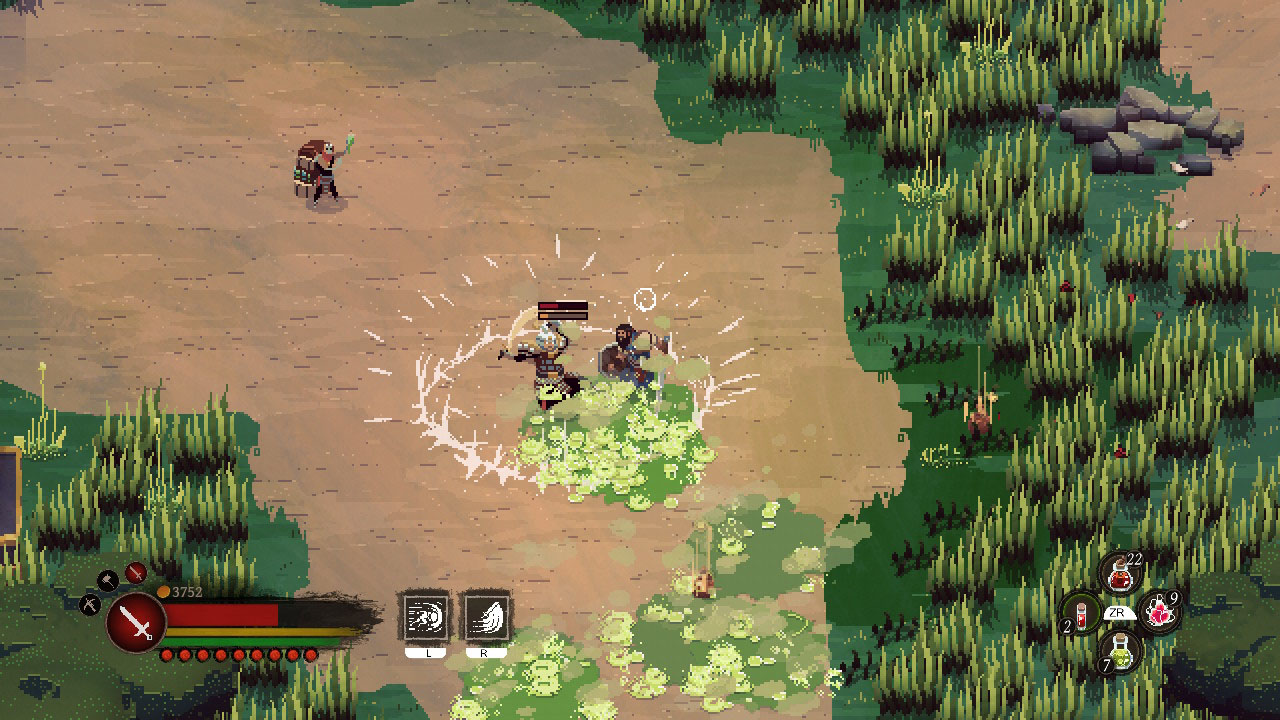 These are the tools you’ll need to outsmart and overpower enemies, who have various forms of attacks and attributes in order to pose a threat. Some attacks are telegraphed by certain colored indicators, which signal whether they can be parried or not. While skills operate on timer cooldowns, normal attacks and dodges consume stamina, a valuable resource to manage should you want to stay on the offensive. There is also a stance meter for both the player and enemies, which will force a staggered state if depleted from too much blocking, which is yet-another way the game will punish combatants. Your goal will be to take down various enemy types in a range of combat arenas, which vary based on level design and location aesthetic.

Replenishing your health and saving at the campfires found throughout the world is also an opportunity for the player to spend a combination of currency dropped from enemies and various items found through exploring and conquering combat arenas to purchase new combat skills, which can further diversify their weapon usages and strategies. You’ll also occasionally find a merchant that will offer a larger variety of healing and combat items, which can supplement the amount of healing items dropped from enemies and found in the world.

No Place For Bravery is a rich, gritty, and gory game, filled with some fascinating world design that evokes comparisons to other well-known indie darlings, yet is also very unique. The world of Dewr, its strange magics, curious denizens, and mysterious colossi are all elements that beg for further exploration, which is sometimes offered in-game, but more than often left unspoken. The world itself is beautifully illustrated, with a nice variety of locales and unique set pieces meant to depict a desolate, yet well-inhabited environment. Particularly striking is the Ossuary, a town built into the dead remains of a fallen colossus, though there’s also frozen wastes, coral cliffs, ancient structures, and green woods. Characters are colorfully depicted, though the larger enemy types truly show the scale and intricacies of the detail.

Some smaller characters are a tangled mess of pixel lines, and their bobbing animations play a little too fast to sell the weight of the narrative gravitas. Thorn is a big, thick man with a nice-sized torso and arms, but the way his noodle-y legs flop around in his walk cycle never fails to make me laugh. Also, the human-animal hybrids are a weird, yet welcome inclusion.

If there’s any part of No Place For Bravery that deserves praise, it’s the impressive soundtrack, which boasts a variety of moody songs with compelling instrumentation. There’s some throat-singing and other excellent vocal/choral work that really sell the setting that is Dewr. While combat leans more towards epic, dark swashbuckling, there are plenty of atmospheric tracks that sell the level of drama the game’s dialogue is aiming towards. While there are no tracks in particular I can point to as a standout, I respect the level of detail and the uncharacteristic nature of the instruments. 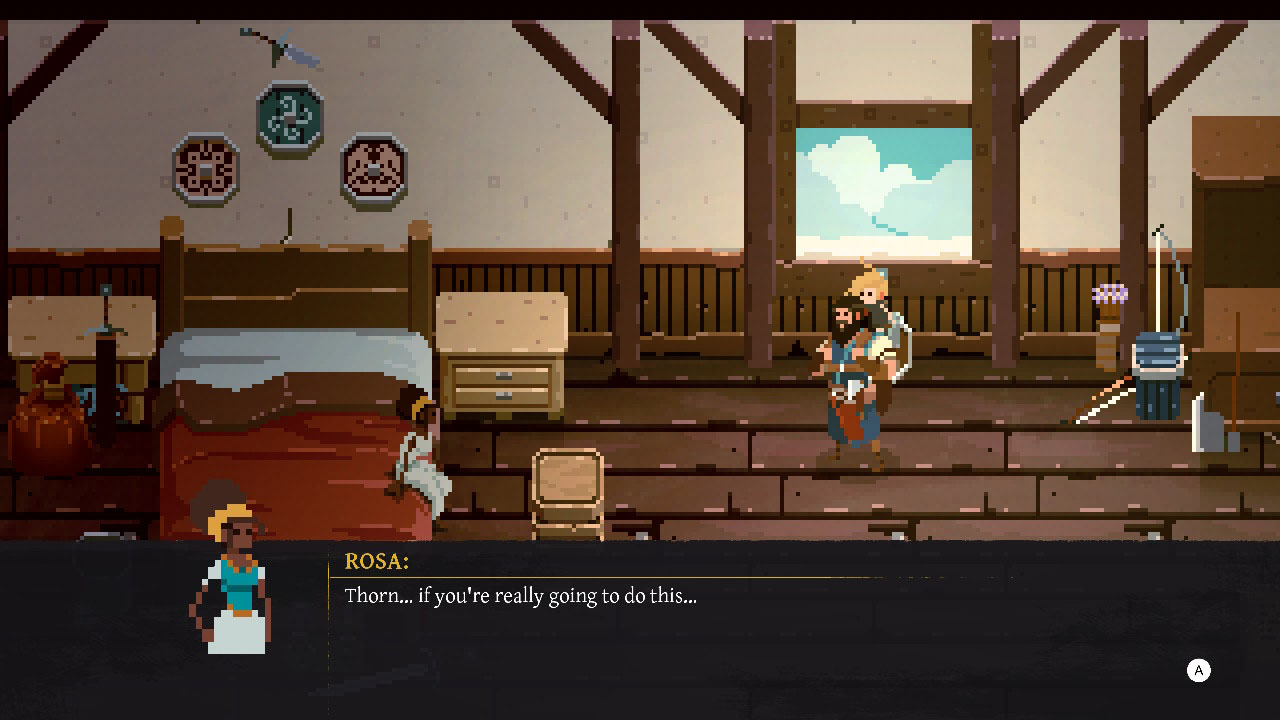 If players wish to understand the larger world, they’ll need to drink in the landscapes and scrounge around in the collectable lore books if they want to better understand Dewr, but even then, the density of the text in these supplemental resources isn’t always illuminating. What is nice about the game is that it offers a number of alternate endings for those looking for a happy (well, happier) ending for Thorn, though playing through and experiencing the last twists and turns might leave you with a very different impression of the characters and plot.

The game’s narrative is not very kind, nor is its protagonist, who certainly advances the plot through violent means, but all of this is done in service of asking “to what end?” Thorn is a violent dude, as we see from various execution kills he can perform, and he’s seen his fair share of craziness, to the point where he’s numb to most of it. But does his tortured past come without consequence? The game seems to argue that the road to redemption cannot be paved through violent means, which offers a nice bit of mature perspective from a game that relies so heavily on brutal action.

Now it’s time to talk about that accessibility element I teased at the start of the review: No Place For Bravery is a tough game, even on its base difficulty settings. This is partially due to how little feedback one gets in performing parries and a number of wonky hitboxes that don’t seem to match their animations, but seeing as how the game is built around its combat, the difficulty has been tuned to justify its existence as a central gameplay element. However, there are base difficulty options the player can choose at the start of their playthrough, and then there are even more granular options to explore in the game’s menu, raising or lowering the player’s health, defense, offense, and even parry window so that someone struggling with the game’s combat can make things a bit easier. 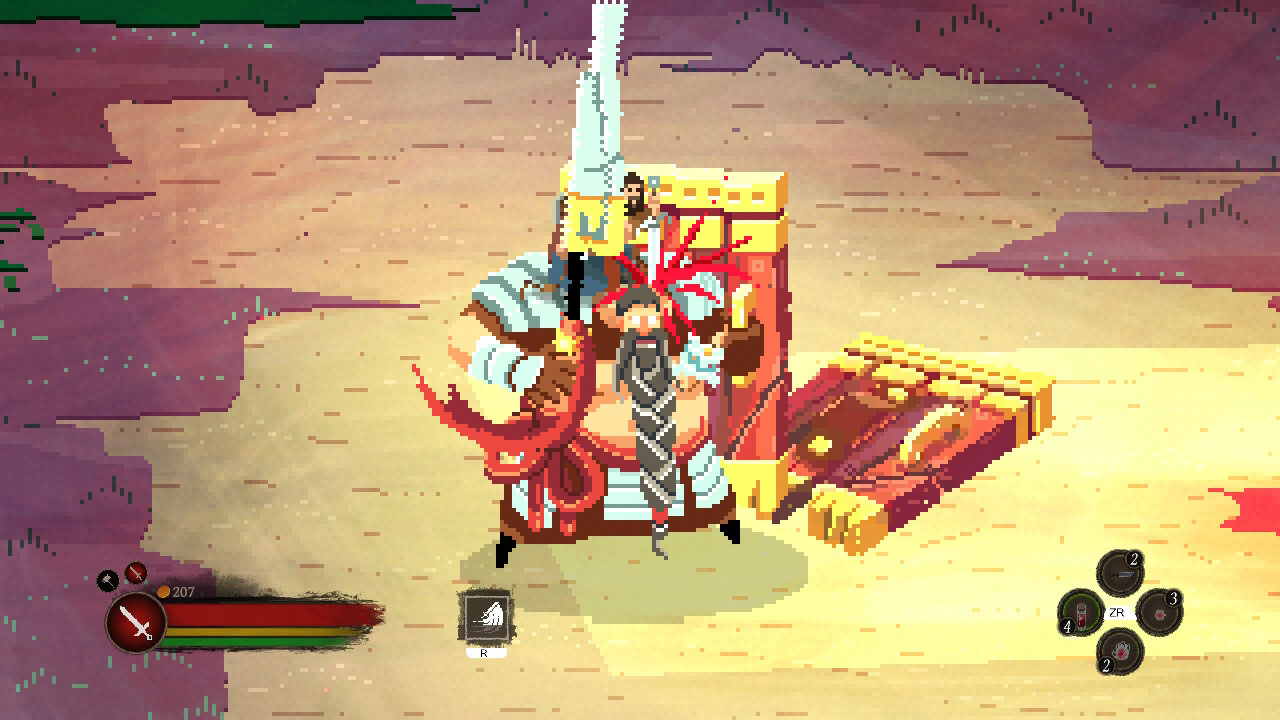 This especially helps in some of the optional combat arenas, where platforming using the dodge mechanic is used in several frustration-inducing ways. The game is a combat-focused one, first and foremost, and doesn’t do much to endear itself to the player when trying other forms of gameplay. With these combat modifications, that sometimes over-tuned base experience becomes far more enjoyable, but since the game leans so heavily on its gameplay, it sometimes comes across as a one-trick pony.

Even though its health/stamina/stance meters are a mixture of mechanics that aren’t often seen from independent developers, they aren’t necessarily expertly utilized, here. You’ll be using the same skills- save the ones you buy with enough currency and exploration- throughout the entire game, and without some more meaningful character customization, you can hardly claim that No Place For Bravery is an RPG. The weapon options aren’t strong enough to support an entire campaign of their own, and are rather different solutions to specific enemy encounters.

Still, its clever storytelling and beautiful aesthetics do help sell the overall experience, though it still faces stiff competition with other games of its kind. It’s not as exploratory in nature as an action adventure and it certainly doesn’t have the degree of customization one might look for in top-down RPGs, but it is a compelling and thought-provoking experience. If you are looking for a family-oriented narrative that has more nuanced things to say about violence than, say, the more recent entries in the God of War series, it is a brisk, smartly crafted story that clocks in under ten hours.

Finding the right balance of combat modifiers to keep the experience challenging but not overwhelming is a welcome component, and those who would like a place for bravery can find it in the game’s most punishing settings. I’d like to think the use of violence in the narrative does more than the challenge of combat, and if that sounds like an experience you can get behind, I’d recommend delving into the dark world of Dewr.