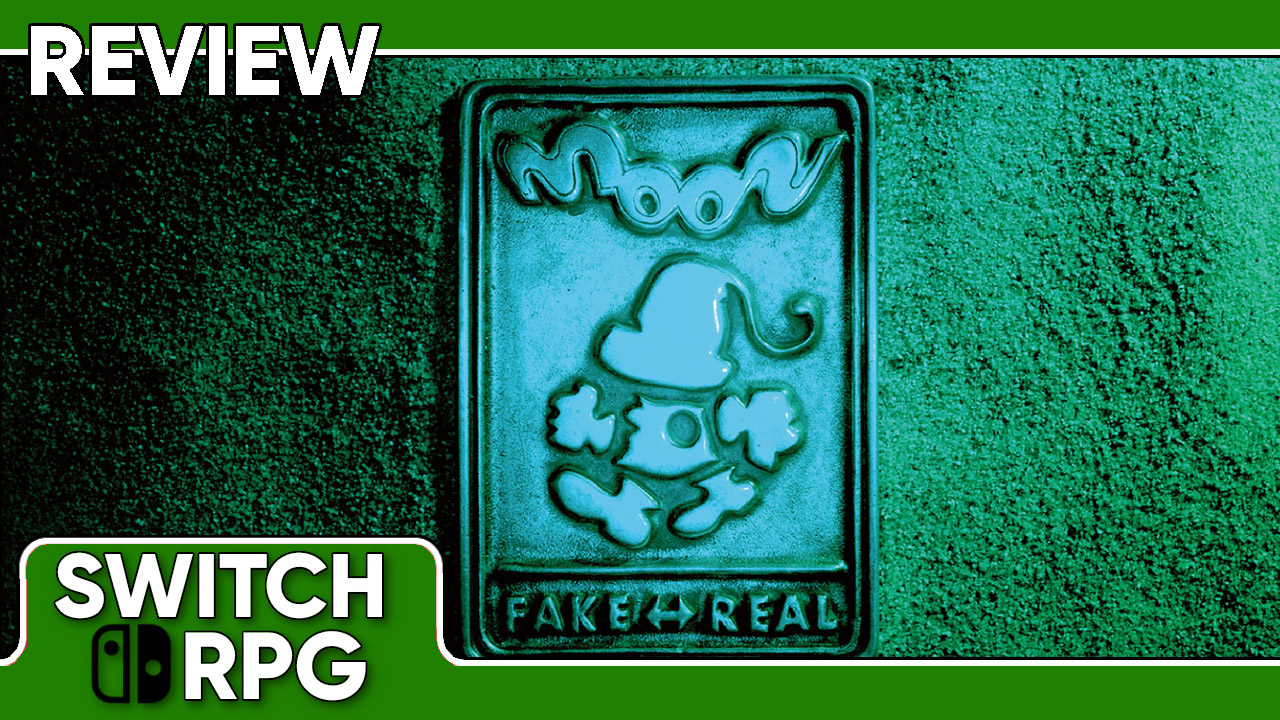 A while back, I asked whether or not postmodernism was allowed or acceptable in the realm of video games. The game I was reviewing in particular was YIIK: A Postmodern RPG, which was a title that wore its inspiration and ambition on its sleeve. I learned that, despite the best of intentions of the developers, the video game community at large was very not much into postmodernism, nor was it very much willing to forgive the design or story flaws inherent in a video game attempting to address the medium from a postmodernist lens. So with all of that said, that same audience should also predictably decry the obtuse, awkward brainchild of another lesser-known developer attempting to put a postmodern spin on the genre about thirteen years prior, right?

Oh, wait, Toby Fox talked about it once? Never mind, people, we’ve got a masterpiece on our hands. 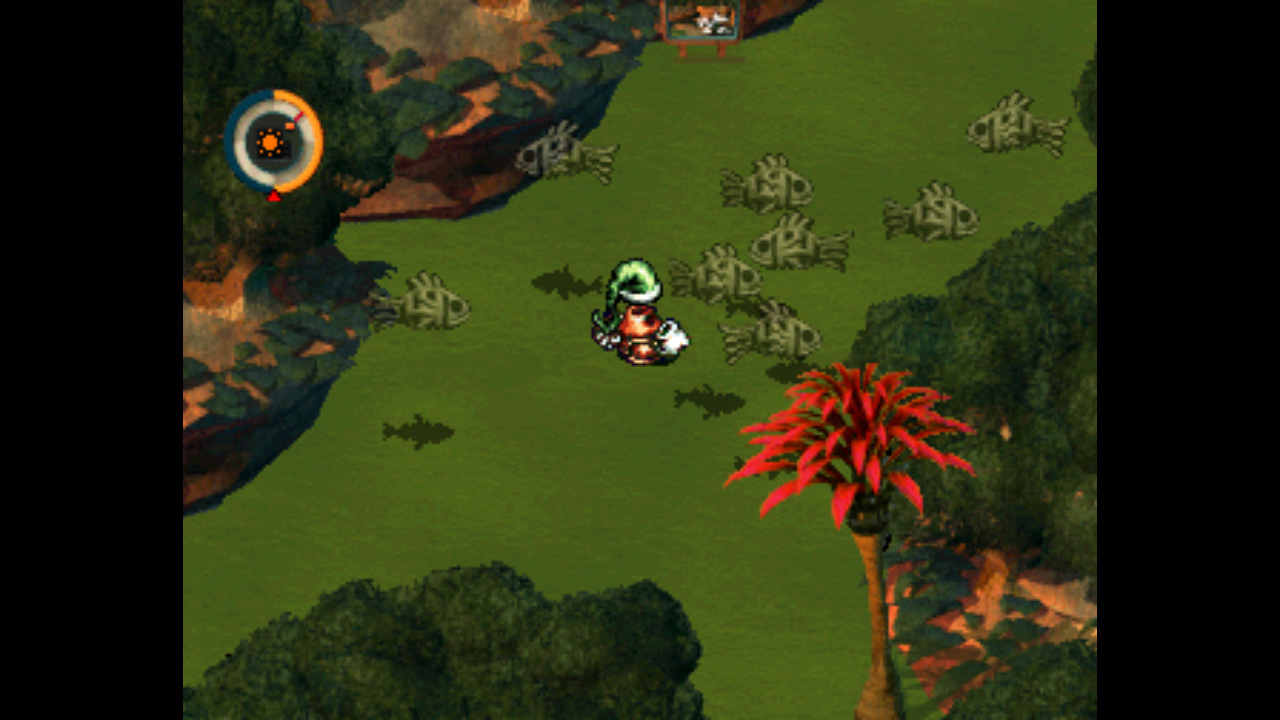 moon is not an RPG.

At least, not in a traditional sense. I hate to say it, but moon’s only RPG-like system comes from the amount of Love you generate from its various NPCs. If you’re looking for a classic RPG experience, you may as well play another game, and when I say that as a warning straight off, I mean it. If you want to play a game that is largely based around following NPC schedules and being in the right place at the right time, this game is definitely more your speed. But I really, honestly, truly wouldn’t recommend it otherwise.

There’s no combat to be had in moon, simply interacting with available NPCs in certain times at certain places. Although, if you should start the game, it is very likely that you’ll end up with a game over in spite of the relatively simplistic game controls. This is because of the game’s sole character progression system, which is that of gaining Love. If you want to explore the world more freely, you need to obtain more Love Points, and Love Points are accrued by performing actions with NPCs in very specific places at very specific times. Based on the starting point of when your character enters into the game, you’re only able to perform a very limited amount of actions. If you don’t save your game by going to bed, you’ll end up “dying” and having to restart the game from the last save point – which, of course, is the start of the game itself, if you have only just started the experience. 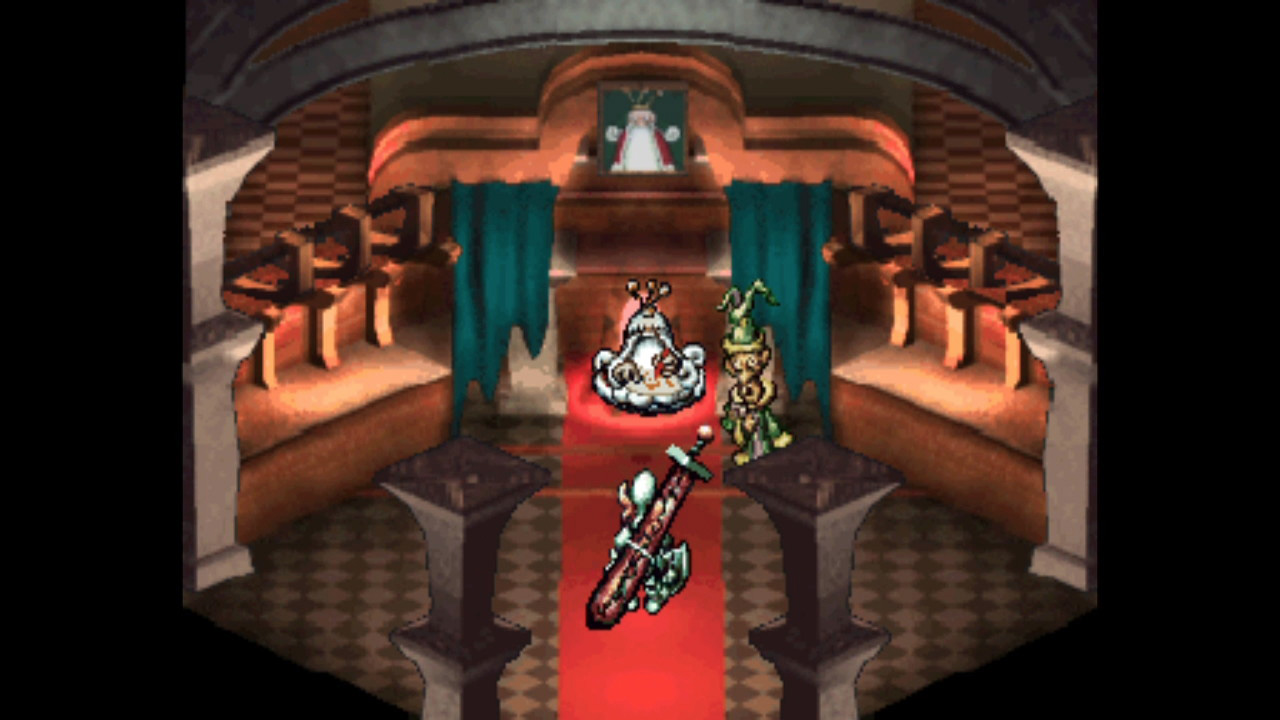 Does moon tell you this? No. Does it tell you much else of what you’ll need to do throughout the game? Also no. moon is an experiment in observation, an attempt to see all that can be seen not just in an in-game week-long cycle of the game itself, but also across all of its environments and the ever-expanding options you’re capable of using. You can attempt to sell specific items to NPCs, or use those gifted to you by other NPCs to learn more about the relationships between each denizen of Love-De-Gard. You’ll establish a schedule that can be further bolstered by the consumption of foods in order to make sure you can go further and complete certain tasks. I’d go into detail about what some of those tasks are, but that’s sort of the point of moon. It’s not an RPG, but rather an adventure title, which means it wants you to figure out its many obtuse and frustrating intentions simply by putting yourself in the shoes of the developers.

moon’s narrative is its most subversive element, considering its gameplay, though mostly obscure, is fairly straightforward. You are a young child who is sucked into a game after having spent all night playing it. This game was an RPG, and so the actions of the typical JRPG protagonist are highlighted in comical fashion – you slaughter wildlife, the townspeople fawn over you, and you learn new skills in order to conquer the evil dragon at the end of the game. 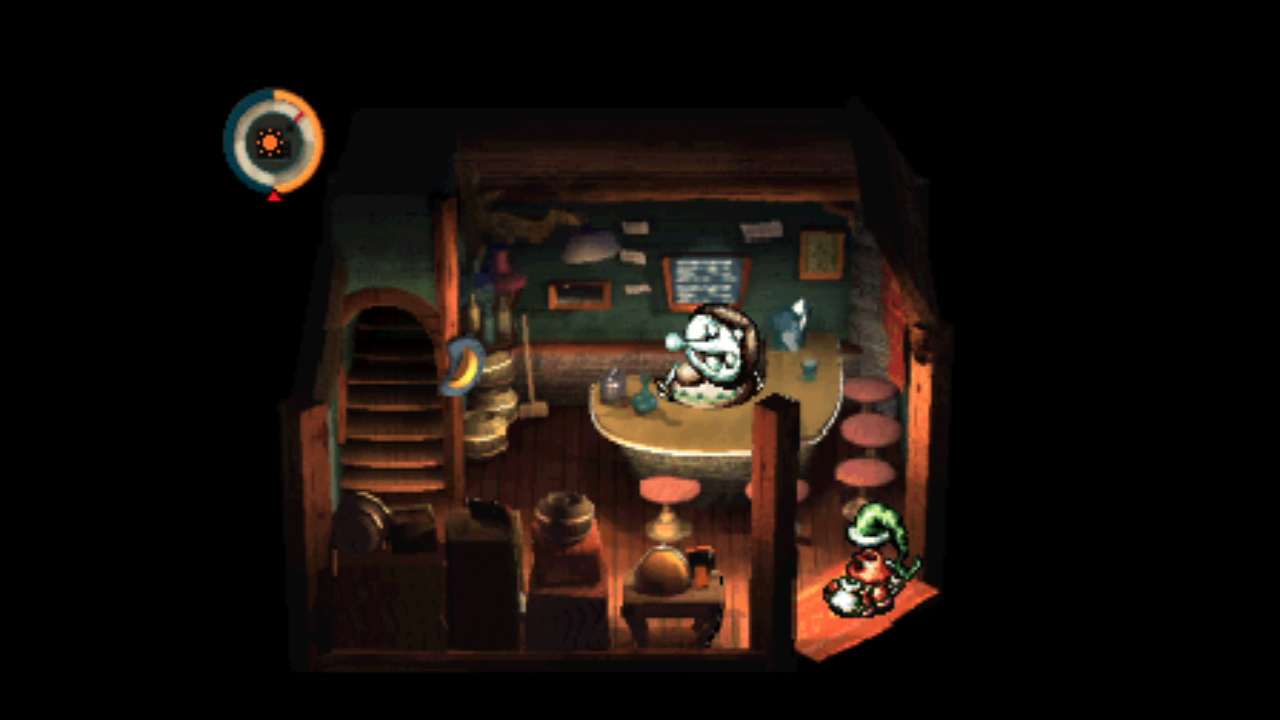 Upon being sucked into the land of Love-De-Gard, however, you are not playing as the hero, but rather as an invisible onlooker – a manipulator donning the clothes of another in order to set the world right through Love. The ways that you’ll do this range from simple acts of kindness to witnessing Love expressed by others due to your not-so-wholesome behavior. In any case, the writing is idiosyncratic, translated in ways that feel childlike and innocent, perhaps due to the relative simplicity of the characters themselves. These are not nuanced individuals, they are NPCs – beings created with specific “cycles” that require little deviance. In many ways, you are meant to feel for these characters and their interactions with one another in a way similar to the denizens of Clock Town from Majora’s Mask. There is plenty of character to be projected upon these basic canvases, but little depth present. This is not necessarily a critique of the game, seeing as the intention of the writing is to highlight that these characters are more or less functions of a fake RPG. Some have quirky accents and behavior, but they’re just individuals living a cyclical existence.

The idea of helping NPCs by following their schedules was a novel one back when the game was released in 1997, but the systems that exist in more complex modern titles make this commentary and objective feel somewhat hollow. There are life simulation titles with far more choices and interactivity than what moon has to offer, but it is important to acknowledge that the game was critiquing the standards of the genre as they existed during its time, even if the ideas on display no longer ring true. The game’s final message could be seen as either pessimistic or optimistic based on the interpretation of the player, though I firmly believe that the intention was to remind any player that games can offer the capacity for growth and change, but that returning to them – especially RPGs in particular – only offers a place of comfort and familiarity, and not necessarily the chance to exhibit growth. 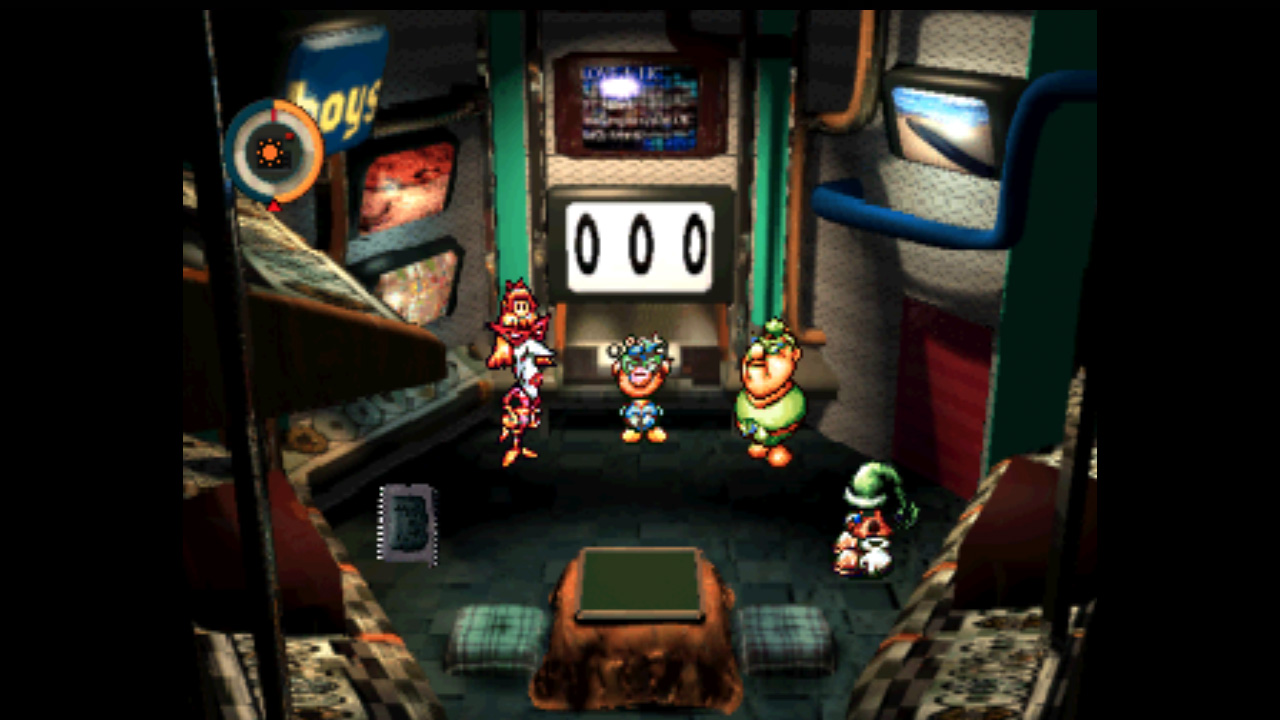 Moon wears its aesthetic inspiration on its sleeve, with a classic top-down look that hearkens back to classic RPG design with just a little added detail to the sprites to enhance their lushness and “realism.” What is more visually pleasing is the usage of mixed media, such as claymation figures for specific characters that exist outside of the usual game’s structure. moon’s music does nothing for me, personally, though it does have a soft and dreamy quality to it that implies something about the nature of the game itself. The ability to create a playlist of your own design within the game via purchasing and collecting various tracks is nice, though, and allows you to format the game to your choosing.

Let me personally state that I hate classic adventure game design. Obtuse puzzles and interactions that force you into a particular headspace in order to make logical leaps are not my preferred method of play, but I can see how getting on the same wavelength as a developer can result in an enjoyable experience for some. Similarly, while I do enjoy games with time and week-based mechanics, I don’t appreciate a game that locks out a great deal of understanding and accessing that content through waiting and slow character improvement. This review has taken me ages to complete simply due to how exhausting the process of playing the game can actually be. 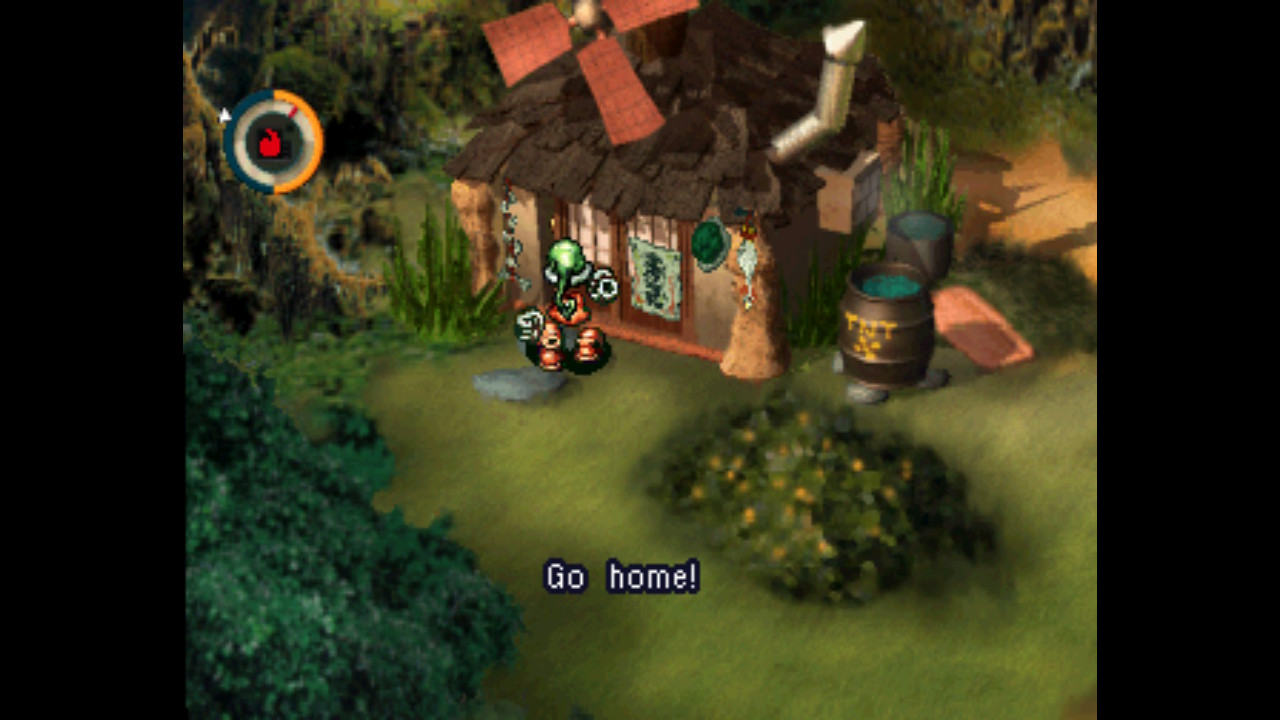 I can see how moon might appeal to some people. It is a simplistic premise that utilizes a very cozy aesthetic and subverts the usual RPG story progression in the way you assist townspeople rather than the Hero. Do I feel that it deconstructs the genre all that much? Not really. It has some choice words to say about the design of random and monster encounters, but the story caveat for this is seeped in the intentions of the developers – both the literal developers and those within the game itself. Essentially, it places a great deal of blame on the Hero’s behavior squarely on the intentions of the game developers who make these titles as well as the players, who eagerly consume these games in a ravenous fashion with no consideration for the poor creatures within. I do believe that moon wants to convince its audience that spreading love is a more heroic venture than mercilessly slaughtering anything that stands in our way, but… I do think that there are many more actual RPGs that communicate this idea with much more nuance and to greater effect.

moon is the prototype for a great number of games that would emerge in the future following its particular structure: Chulip, Chibi Robo, and Little King’s Story, to name a few. If none of them seem familiar or successful to you, there is perhaps a reason why. Though ambitious in intent, moon struggles to be engaging or enjoyable in a way that feels relevant today, which is why it is best appreciated as a forgotten relic, and nothing more. If you only know what Toby Fox did upon referencing the game as inspiration, then perhaps it is best that you keep that idyllic and somewhat misguided idea of moon at the forefront of your mind and avoid playing this title.

After hearing about this as some mythical game we all missed out on for so long, I was pretty disappointed too. There’s just not much game there. If the love is thanks to the characters and setting, I think they’d be just as well served in a non-interactive format. The main gameplay seems to be to catch the spirits, but as far as I played it seemed like the way you did this never changed? No learning new skills for capturing them in a new way or anything. Needing to go to sleep or eat or risk losing all your… Read more »