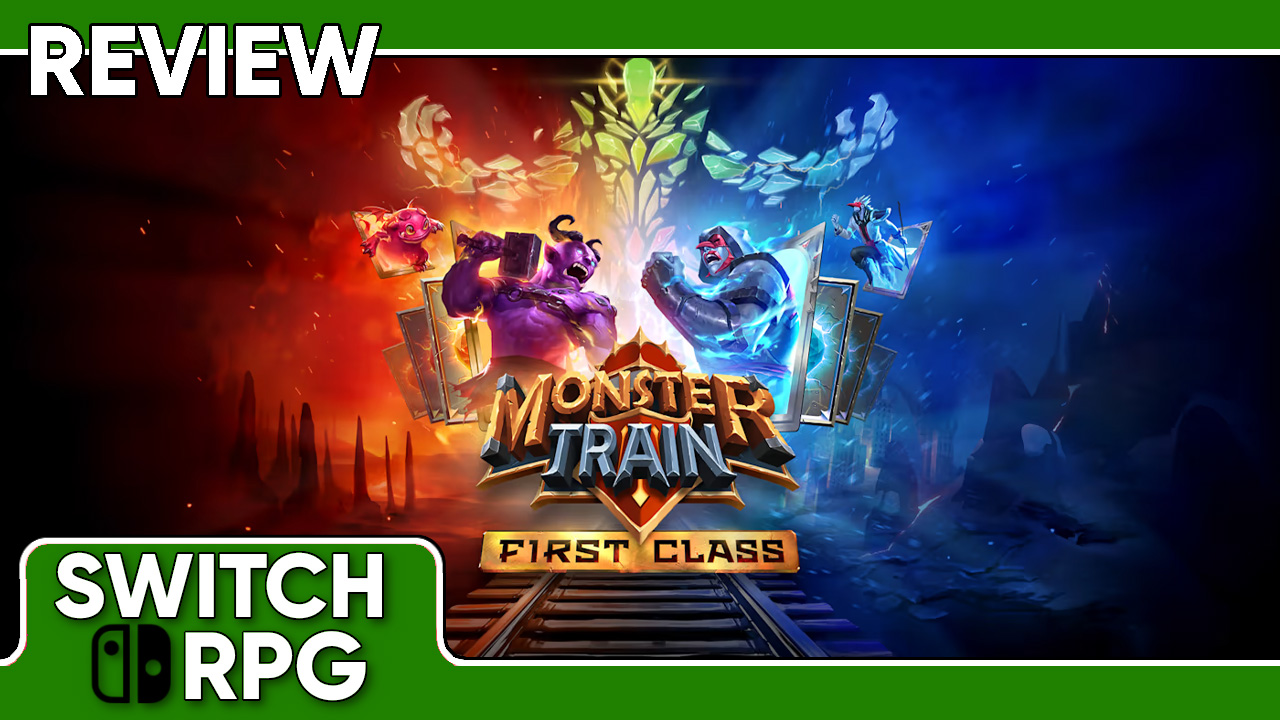 Ah, the roguelike. Who doesn’t love a good deck-building riff on of the core concept? Well apparently, I’m a glutton for punishment. I’m very proud (?) to have hyperlinked every word in that sentence, but that also means I’ve played a load of these kinds of games on the Switch, and that’s not even including the Slay the Spire knockoffs like Castle Morihisa (which we’ll get to soon). Essentially, if you’re looking for a roguelike deck building game, there’s very few I haven’t played, so if you’re going to ask for an opinion… it might as well be me.

“Well, that’s fine and all, Evan, but have you actually played Monster Train? Like, do you know what it’s like to play every facet of the game?” Well, if this review releasing more than eight months after the game released tells you anything… yes, yes I have. But it’s not fair for me to say I’ve played eight months of Monster Train: First Class. I’ve played about two months of the game, logging on every day, in order to give my impressions of the experience. So now, with all of this understanding of the game’s mechanics, can I give a fair verdict? Well, if you’ve already played this on other platforms, I don’t think the Switch version does anything new or noteworthy to warrant a double dip. But for newcomers to the roguelike deck-building genre, Monster Train: First Class manages to provide a solid foundation while also offering a tower-defense twist that makes it all the more compelling in comparison with its contemporaries. Let’s find out why! 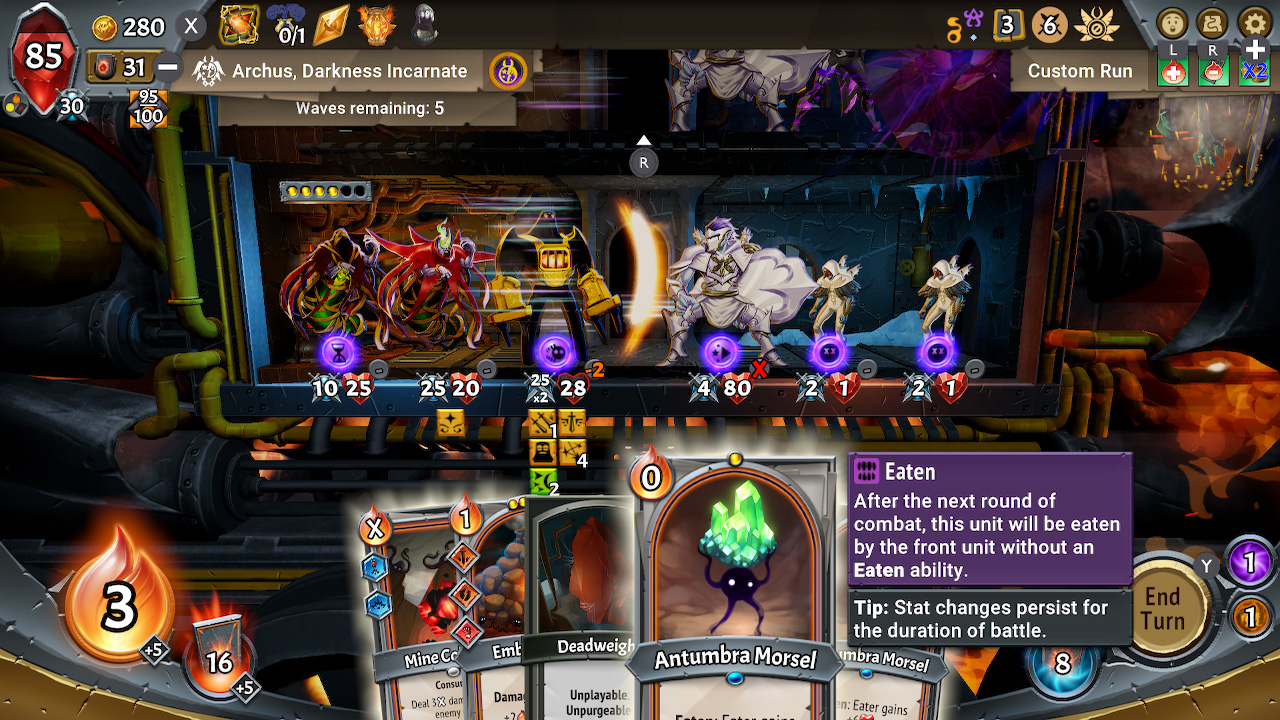 Monster Train is a hell of a good time, and that’s an objective statement. In a war of angels and demons, the former seems to have gotten the upper hand, and although you thought you’d stop playing games when hell froze over, it’s the literal premise of this title. Dante’s fans are in good company, as you’ll engage in nine fights on your journey to reignite hell, with each stop offering increasingly intense challenges to overcome. Where most deck-building challenges would stop you at a simple “you vs them” landscape, Monster Train offers a novel twist: your Pyre (the engine of your train) is on the top floor of your locomotive, and if it loses its energy, your journey ends. In layman’s terms: this is a deck-building tower defense title.

It’s a valid interpretation of Magic: the Gathering’s rules regarding life pool and permanents, without the passive nature of just setting up shop and letting a build go crazy. For example, a specific turn one might be very effective for a long-game play: if you set up a series of benefits that will create a consecutive buff effect for a single unit on multiple turns, you expect that series of buffs to occur again and again due to the nature of the static battlefield. However, Monster Train adds the consideration of multiple levels, which means if you don’t defeat an enemy on floor one, they continue to the next floor, and so on, until they reach the Pyre on floor four and engage in a back-and-forth of hellacious nature. 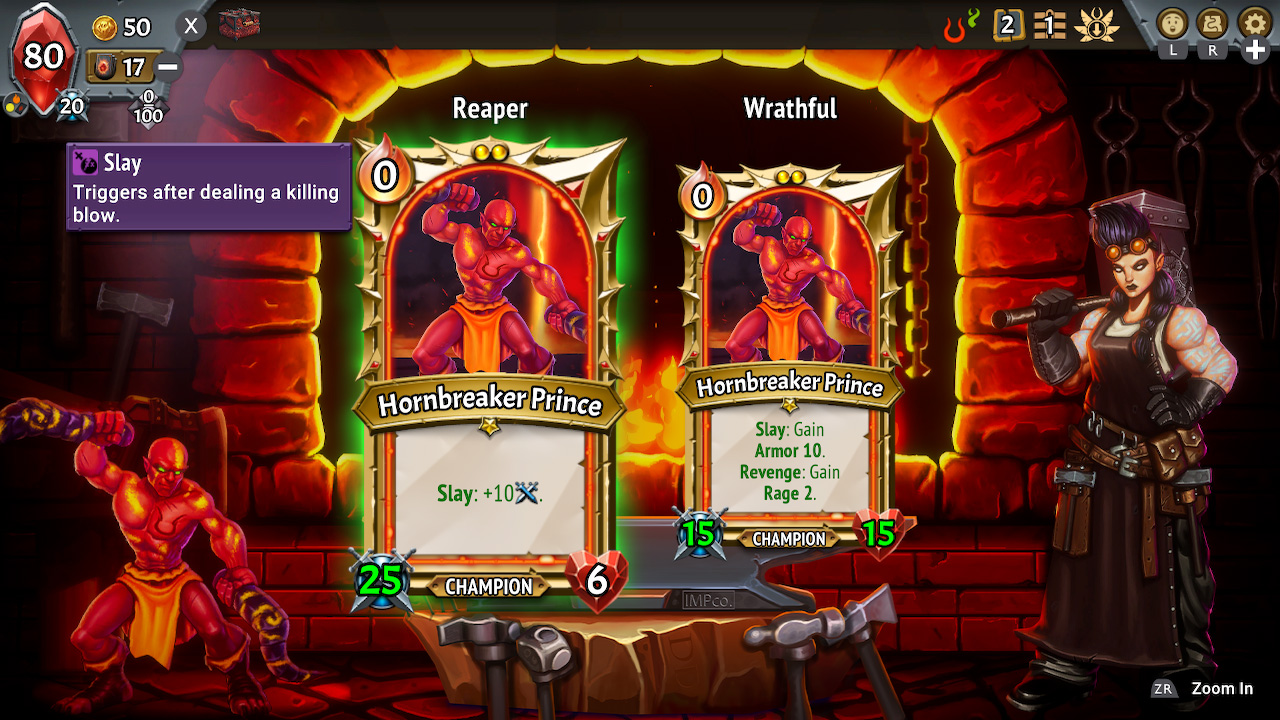 With this in mind, you want to make sure that one or more of your units is able to withstand the damage they receive every combat phase, which occurs at the end of your summoning turn. That means you can apply whatever amount of buffs, units, and instants that your mana pool and hand size offers, within the confines of the deck you have crafted. All this amounts to a high amount of versatility between the one of three floors that you can summon units, apply buffs, and cast instants/spells upon. What are you going to do with that choice?

The answer is, “a lot,” and that’s not even considering the amount of passive buffs you can apply due to artifact/relic buffs you can receive, either as rewards for facing down more intense challenges, or through saving money for specific purchases. Although Roguebook offers a similar customization system, you can also take the opportunity to apply passive and active buffs to either your spells and units via specific “routes” during your progression through the nine layers. In true roguelike fashion, however, you are challenged with making specific choices that compound upon themselves: your units may be stronger on with the investment into a unit-centric shop, but that means you might close out the opportunity to buff your spells, a resource that can be executed multiple times unlike summoned units, which vanish upon defeat (save for specific buffs received from shops). But when you weigh the single use-nature of spells against the permanent nature of units that can remain on the field, you’ll quickly realize that there are indeed a number of opportunities and avenues that might make- or break- your deck. 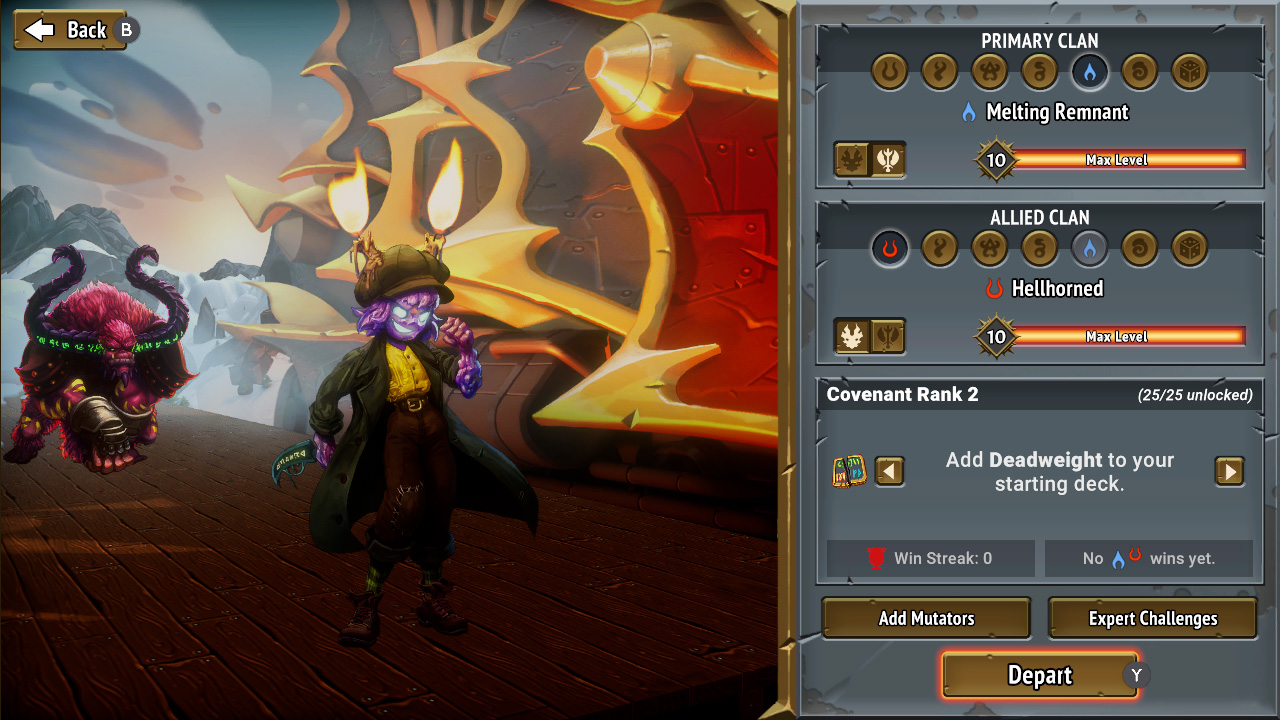 Monster Train has an excellent soundtrack. When I state this, I do so in comparison with other games of its subgenre and not necessarily all RPGs. Although (and to be fair) Monster Train’s OST is great regardless of this- it’s just good music. Whereas its contemporaries rely on aesthetically consistent musical tracks to maintain their rhythm, Monster Train offers a variety of tracks for different encounters and moments of calm, which is pretty neat. This does come with a caveat: although the boss battles in Monster Train do “hit different” due to the amplified intensity of the OST, the game’s basic monsters definitely don’t reach the iconography and consistency of Slay the Spire or Roguebook.

Where the game gets a great deal of its personality is in the aesthetics of the demon factions you can use in your descent, as well as the flavor text of many- if not all- of Monster Train’s many cards. This lore that offers color to the various factions of the underworld is more than substantial and though some might complain about the limited scope of the setting, you might be pleasantly surprised by the variety on display. Despite being a relatively simple premise, the various factions of hell are surprisingly satisfying to discover, and are bolstered by the progression system, which is most often used as a positive point in games of this sort. Even the flavor text of randomized event encounters offers a high degree of narrative satisfaction from the game that isn’t present in subgenre contemporaries. 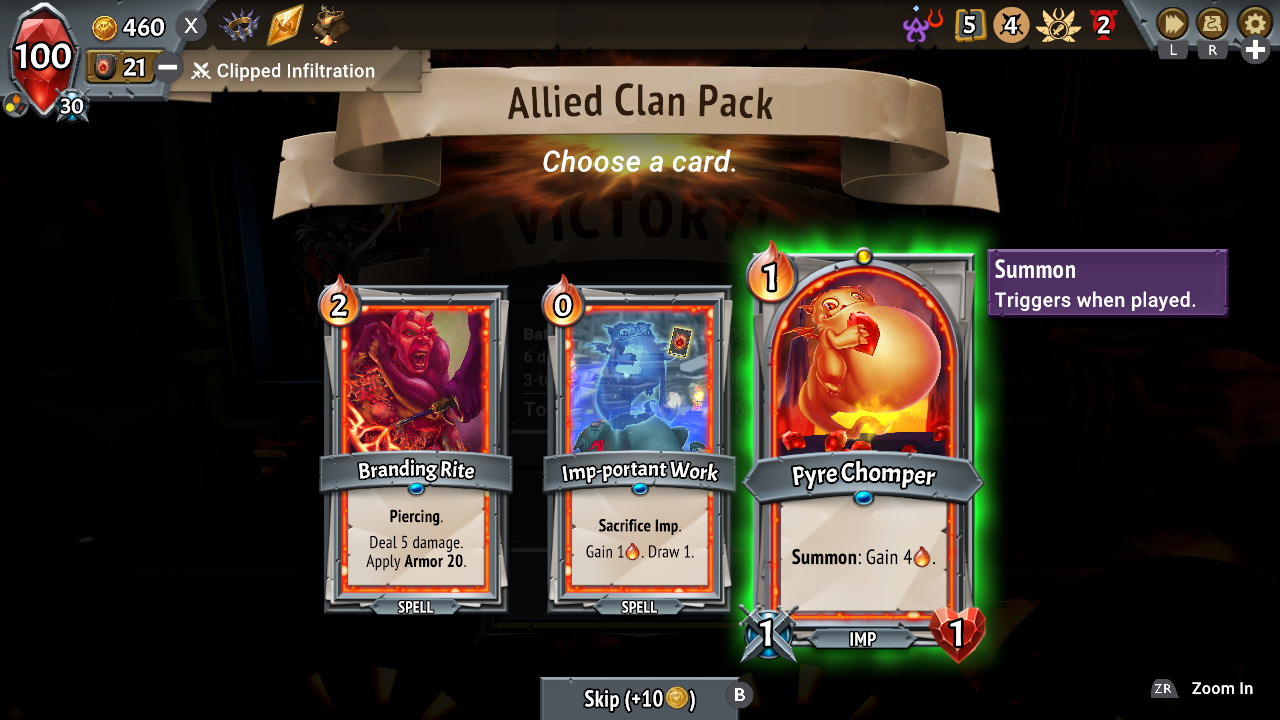 If you’ve read a roguelike deck-building review from me previously, you might know that I tend to find issues with the nature of slow-unlock progression systems. While Monster Train is no stranger to the concept, there are meta goals, such as the faction unlocks with very transparent objectives, and the dual-setup concept behind every run, which tasks players with creating a pair of factions for each run that can be highly customized in order to distribute experience more generously. Even so, Monster Train features a pretty substantial number of factions, and within those factions are an equally substantial amount of cards. A reliable strategy for one faction can simply cease to exist once the draft pool has become so colorfully varied that creating a strategy can feel like a matter of luck.

Let’s face it, all roguelikes do feature some degree of luck, and Monster Train is fairly merciful with showing players the construction of its map at the start of each run. But as you raise the intensity of its challenge by successfully reigniting Hell, the game will start to throw new elements into your deck that lower your chances of building a strong hand, which is not unlike the tricks of the subgenre’s trade, but can still end up feeling like a slog. Fortunately, you can exit out of miserable runs rather quickly, or see how far you can take a bad situation with the game’s incredibly brisk speed-up options. In any case, Monster Train makes itself extremely easy to get into at just about every turn, telegraphing its mechanics, damage, and pathways. 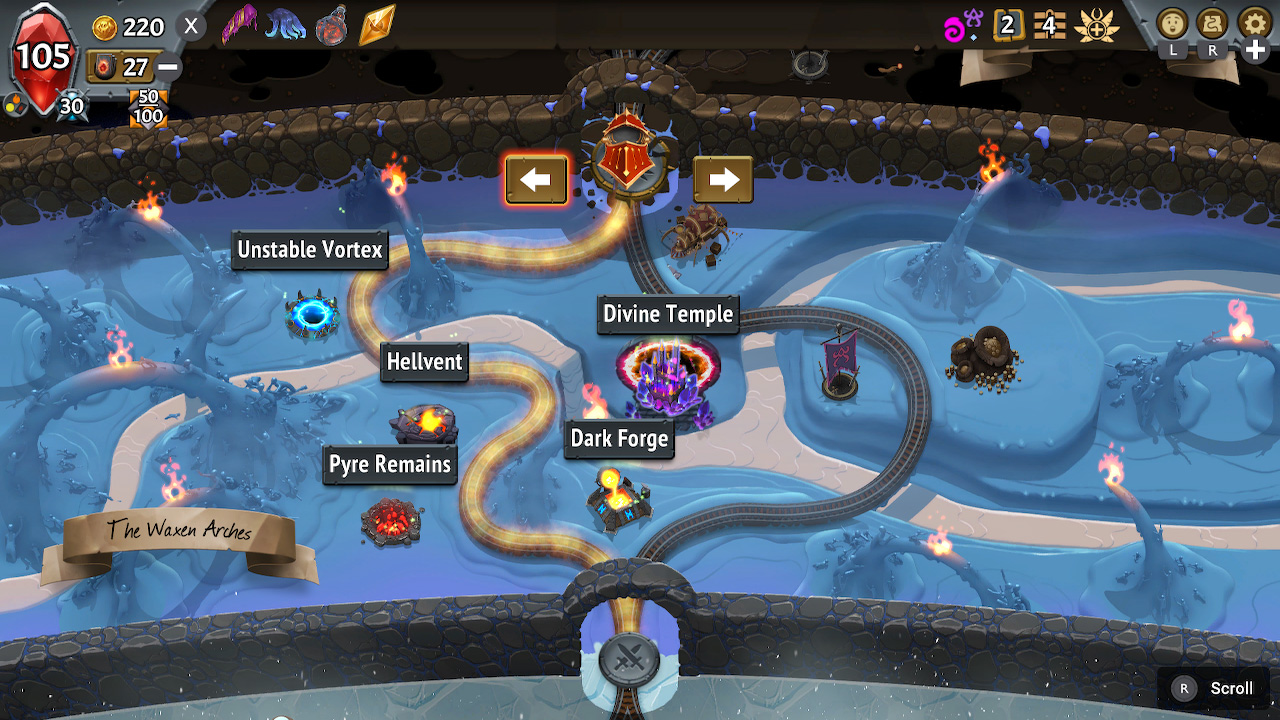 Its cast of demon factions feature alternate deck setups and have nearly zero overlap in gimmick mechanics, which means the choice to invest in straightforward builds or synergize for maximum chaos is almost always rewarding. It does sometimes feel like it is very easy for a close-reader to “break” Monster Train. However, anyone, even a seasoned-deck builder like myself, can say that on the basic levels of challenge, and fortunately, Monster Train offers many enhanced levels to tackle with its hordes of evil. There are also challenge runs that offer a delightful and insane speed-running challenge to tried-and-tested fans of the game, though this mode isn’t friendly for first-time or relatively green players. Still, it offers a weird and novel take on challenge and score chasing that its contemporaries do in a very different way, and that’s pretty damn cool.

While it might be difficult to dethrone Slay the Spire as a formative title in the subgenre, Monster Train does almost enough to surpass it. However, its few, specific oddities and pitfalls end up putting it at the same level, which is still a great feat. It encourages thoughtful choice and careful play, and throws more than enough random curveballs to keep any player guessing. Despite its much lower amount of combat encounters, a full run still amounts to a fairly impressive time investment, though still remaining respectful of the player’s time due to its quality of life features and fast number-crunching. If you can only play one roguelike deck builder on the Switch, Monster Train might just be the title for you, though you’ll need to consider whether its premise and tower defense insanity are the right combination. If you’re a fan of the subgenre as a whole, however, this is arguably one of the best versions of this particular style of gameplay that you can find.