Flash back to the first half of 2017. The Nintendo Switch had recently hit store shelves, selling in impressive quantities. The initial flurry of release titles – led by The Legend of Zelda: Breath of the Wild – have finally been completed. The honeymoon is over, and its time for you to see what kind of library this impressive hybrid console can build for itself. Where do you look? What games do you buy?

For me, that question was answered by the curious little platformer: Wonder Boy: The Dragon’s Trap. This remake of the Sega Master System title provided beautiful spritework, a lively soundtrack, and a sort of proto-Metroidvania game design – all executed with surprising effectiveness. I played the game twice over after picking it up on the eShop, and put in a third playthrough earlier this year. I never played the earlier Wonder Boy games, but I found myself impressed with both the quality of the original title and how new developer Lizardcube was able to capture and modernize the original game.

So when news hit that a new game was on the way to the Switch – one that also called directly back to Wonder Boy: The Dragon’s Trap – my interest was peaked. While this game borrows many of the same elements from Wonder Boy, it would stand as an entirely new title with a fresh take on what made Wonder Boy great. This past week, I’ve had the pleasure of putting a good chunk of hours into Monster Boy and the Cursed Kingdom – and I can confidently say the game delivers on every promise made with its announcement. 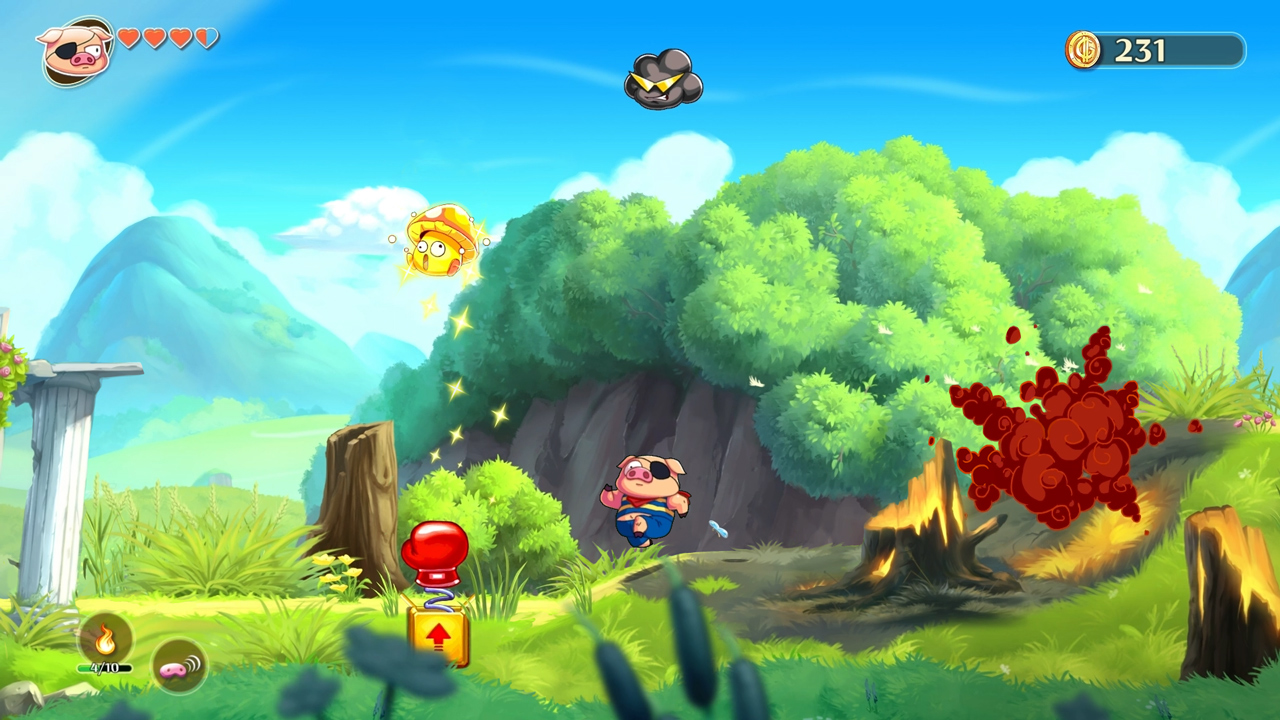 First and foremost, this game looks and sounds beautiful. I was doubtful, at first, after playing the remake of Wonder Boy 3, if another developer could match Lizardcube’s beautiful spritework and orchestrated remaster of Wonder Boy 3’s original soundtrack. I’m happy to say that those fears were unfounded. While Monster Boy takes its own artistic direction, it’s brighter and more cartoony spritework serves as a noble cousin to Lizardcube’s most painterly style. Sprites pop off the screen in vibrant colors, with smooth animations and heaps of creative effects. Meanwhile, the music for each area is as catchy as it was 30 years ago and masterfully reworked into a modern soundtrack. If I can make any complaint about the score, it’s that I would have liked to have heard some more original tracks, rather than continuing to retread the same beats found in Wonder Boy 3 and its remake.

From a storytelling perspective, Monster Boy is leaps and bounds ahead of its predecessors. Rather than the relatively lonely and perilous world found in Wonder Boy, Monster Boy’s world is populated with a whole host of quirky characters. An assortment of helpful villagers, shopkeepers, and royal servants wander the game’s central town, offering advice, directions, and insight into the game’s world. Meanwhile, out in wild, other denizens can be found living in and exploring the world on their own. Some are helpful, others may present dangers to your quest. But the central idea here is that this world feels vibrant and lived-in. 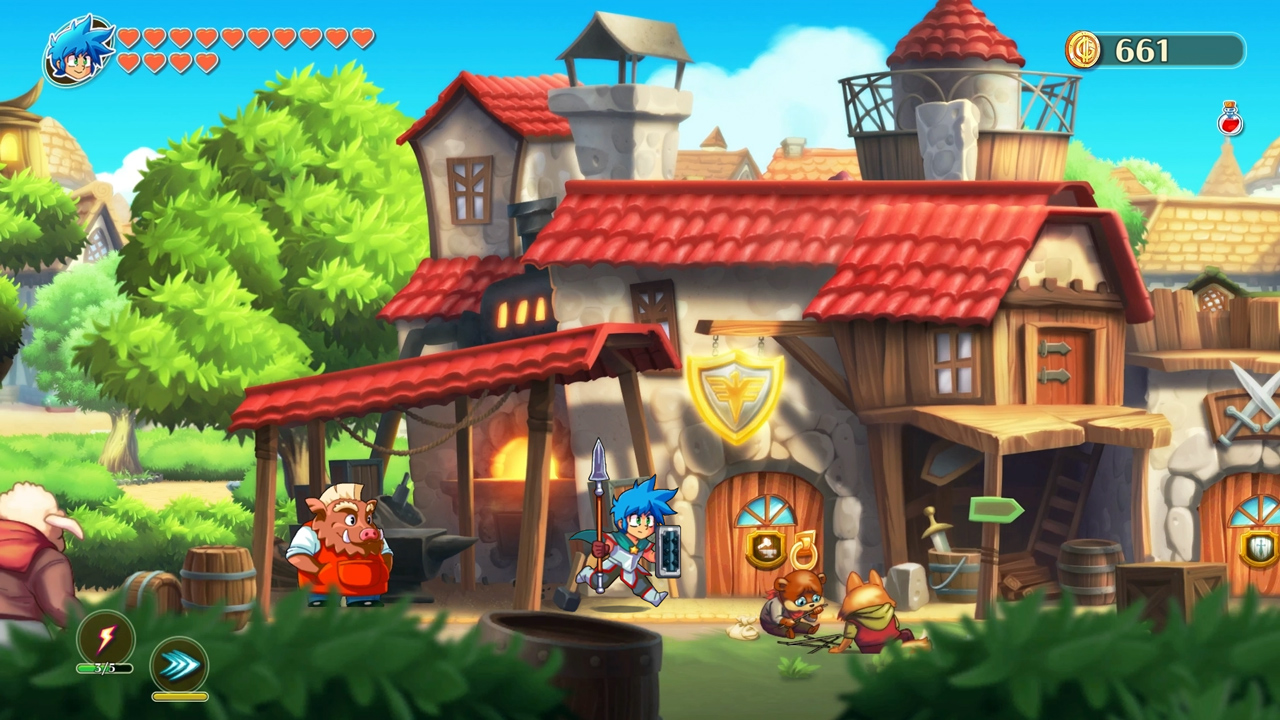 If Wonder Boy 3 is considered a “proto-Metroidvania,” then Monster Boy has jumped into the genre with abandon. While much of your quest through the game world is directed towards a specific goal – becoming perhaps too linear at times – the world is also littered with secret treasure chests, hidden rooms, nooks, crannies, and puzzles to explore. Nearly every time I found myself saying, “Well what if I did this?” I was awarded with some kind of item, treasure, or powerup. The game constantly rewards the player for being creative and going off the beaten path. At the same time, many zones have paths that are clearly blocked off or inaccessible, signaling to the player that they should return later when their bank of available abilities have expanded. For example, after collecting two of the five McGuffin’s in the game, I was able to perform a quick tour around previous zones and collect items to power up my equipment and expand my available bank of spells – providing tangible rewards for taking initiative to explore.

The majority of the puzzles and platforming challenges found littered throughout the world scale well to difficulty. I wouldn’t, for instance, expect my 7-year-old nephew to find the game anything but difficult, but experienced gamers should be able to solve most puzzles fairly quickly. A few times, however, I found myself stumped for no particular reason. These delays – one which cost me nearly a half hour of game time – are mostly the result of the developers having a clever idea, but forgetting to properly prepare the player in advance to solve the riddle. These moments are, blessedly, few and far between. 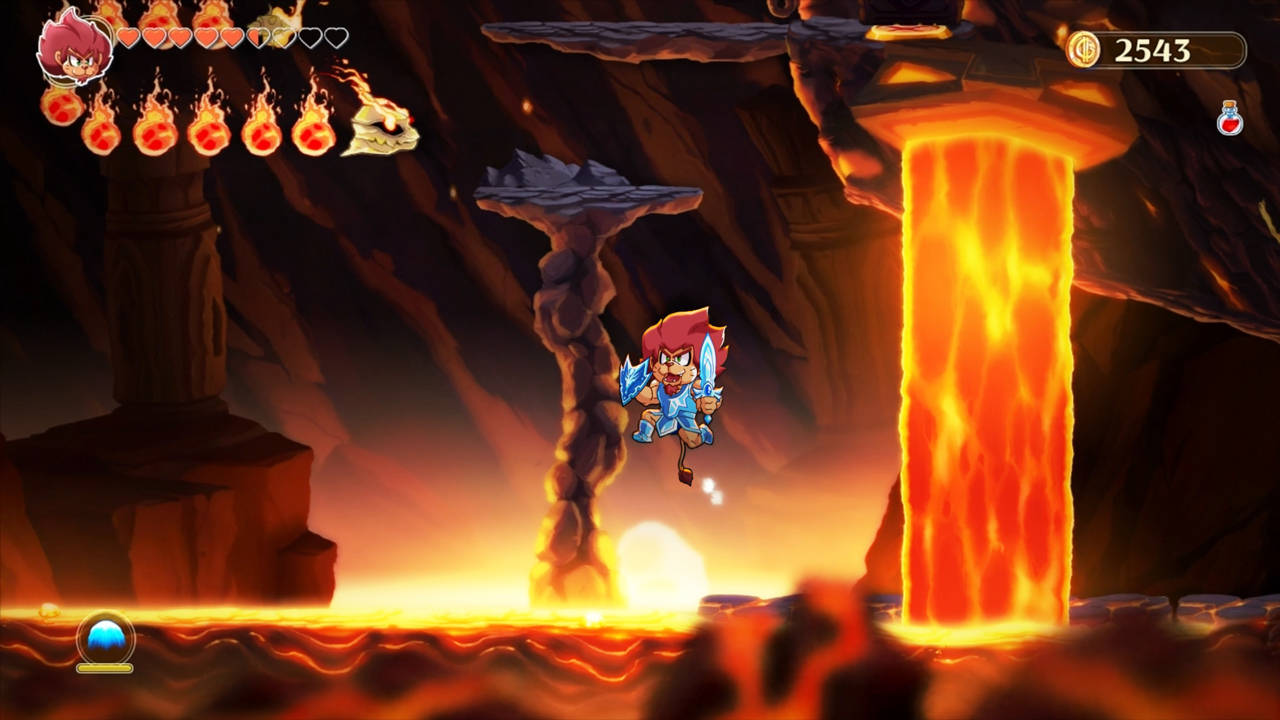 The core conceit of Monster Boy is the player’s ability to transform between various animal forms to tackle the challenges presented to them. As in Wonder Boy 3, the player starts as a simple human, wielding a sword and shield, before being transformed into a hideous creature – in this case, a Pig. As the player progresses through the game, they will continue to unlock new forms with different abilities, expanding their ability to platform, explore, and solve puzzles. Some of these transformations are direct analogs to those found in Wonder Boy 3. The snake transformation operates similar to Wonder Boy’s mouse. The frog operates similar to the merman. However, Monster Boy takes these transformations a step further – adding additional abilities that make each form feel more fleshed out and realistic.

The Pig form – entirely original to Monster Boy – gains several unique abilities. It sinks naturally in water, and can sniff out secrets with its impressive sense of smell. It also has a unique ground point ability used to open doors, sink pillars, and in some cases demolish the landscape. The Pig is also one of the few transformations available that can natively use magic spells – giving it a huge assortment of utility.

And utility is the name of the game here. While each new transformation gained is typically followed by a zone requiring those unique abilities, the developers were careful to continue to make the older transformations not only useful – but necessary to progress the story. Players find themselves constantly thinking of which abilities are most useful in any given situation – switch back and forth to flick switches, take on unique enemies, and even beat bosses. Whether you are climbing walls and spitting acid as a snake or swimming underwater and swinging on your tongue as a frog, each form brings something unique and interesting to the table.

The final piece of the character progression puzzle is, of course, equipment. While not every form makes use of the gear collected throughout the game, the ones that do will instantly find a wide array of utility. From boots that melt ice blocks or provide a double jump, to swords that shoot fireballs and create platforms, the game constantly surprises you with new abilities and new ways to fight monsters and explore the world around you. Not only that, but collectibles scattered around the world allow you to pick and choose which equipment you want to upgrade with additional abilities to enhance your experience. 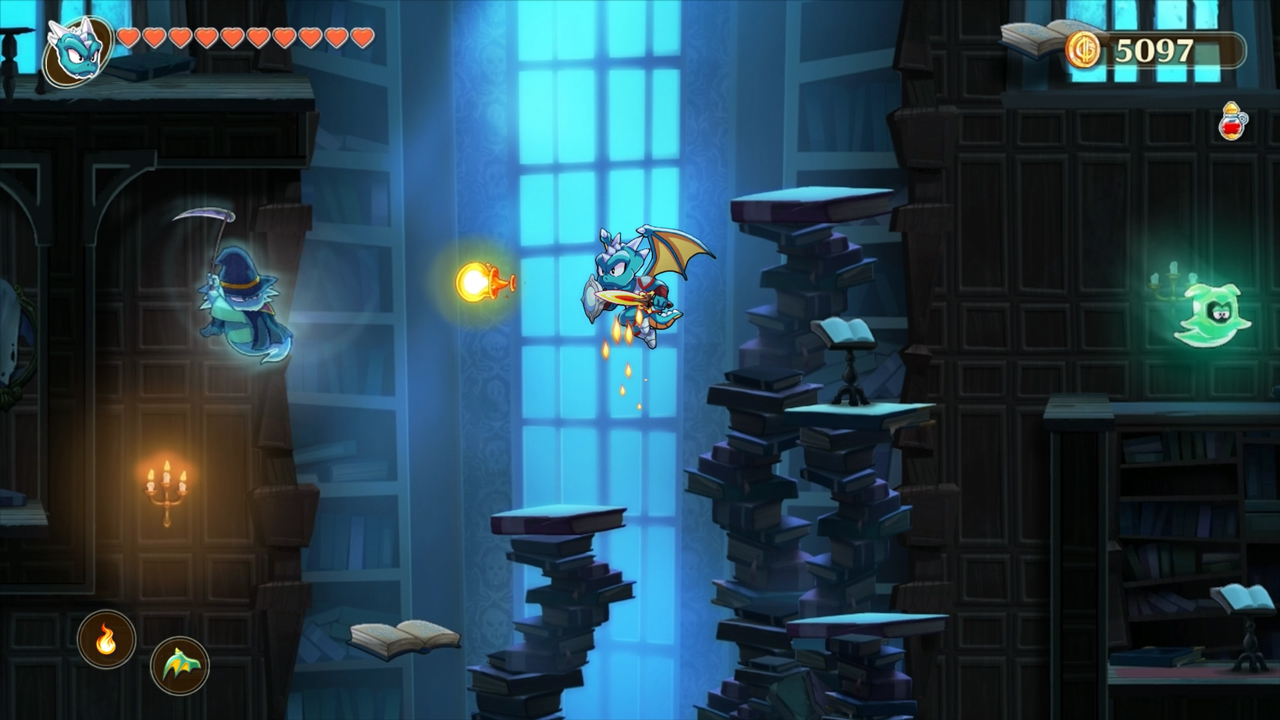 All these abilities come to a head when facing off against the array of monsters that populate the game world. Familiar faces from the Wonder Boy franchise are all here – flowers that spit fire, swooping bats, jumping frogs, and evil clouds that try to drop magic on your head. But both these franchise monsters – and the myriad of new challengers that come along with them – have been fleshed out just as much as our hero. For example, many monsters will respond to being attacked, changing their attack pattern after the first hit while flashing a face of anger. Others sport new or unique attack patterns depending on how you try to maneuver around them. As with the environments, these monsters are beautifully designed and animated – complete with expressive faces and smooth movements.

Boss designs, too, offer a variety of attack patterns and can change as battles against them progress. You’ll find yourself having to think on your feet, changing your strategies as your enemy adapts to your first method of attack. Bosses feel aggressive and dangerous – and in some cases downright sneaky – forcing you to think quickly on how to best adapt your tactics. Like the monsters, these bosses are wonderfully crafted, and each provides a unique challenge that never feels stale or rote. 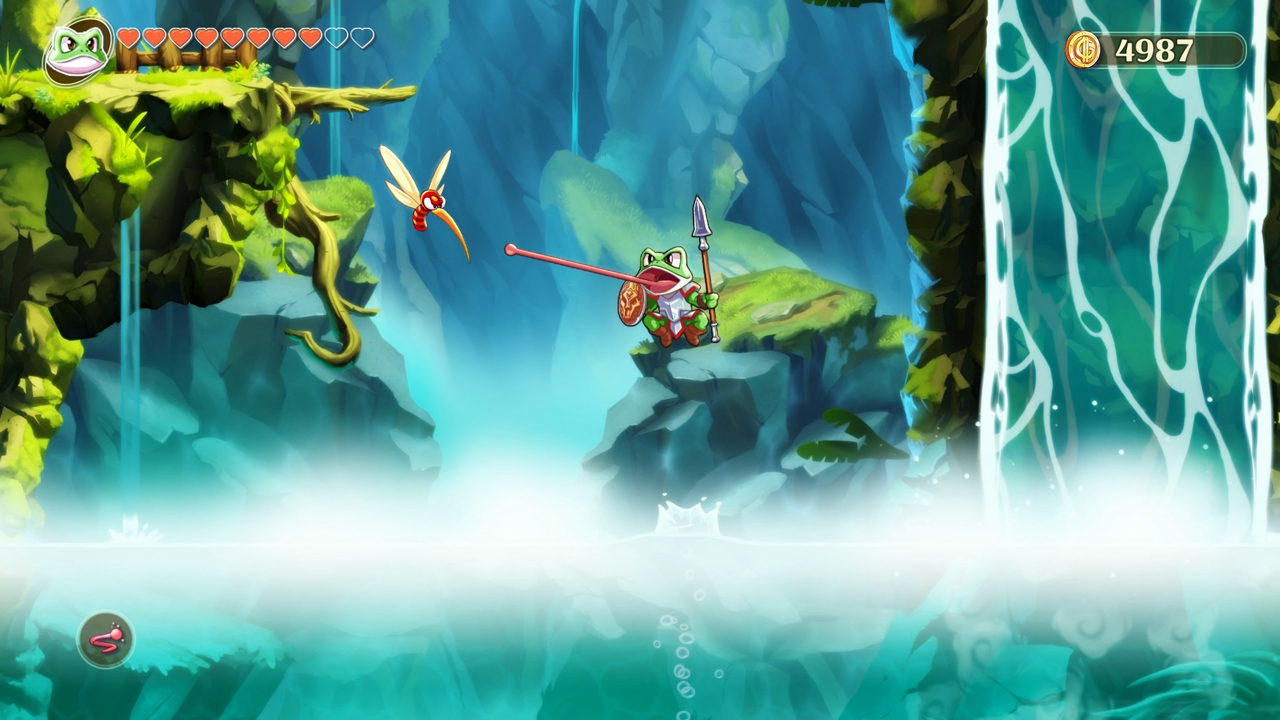 Monster Boy and the Cursed Kingdom fully succeeds in its mission to capture the spirit of Wonder Boy 3 and successfully carry the franchise into the modern era. Every strength the original games had, the developers of Monster Boy went out of their way to expand upon or enhance. They have crafted a game world that is vibrant, lively, and full of riches to be discovered. While the game’s score could use some variety and a few rooms could use better telegraphed puzzles, these flaws in no way diminish the overall enjoyment of this delightful title. If you have an interest in platforming games or metroidvanias, Monster Boy should quickly be placed high on your list of future purchases.

I wasn’t entirely sure that this game would be ideal for my tastes, but your review has more or less confirmed that it is. Great review!

Ok this one just moved up my list to buy! Great Review!