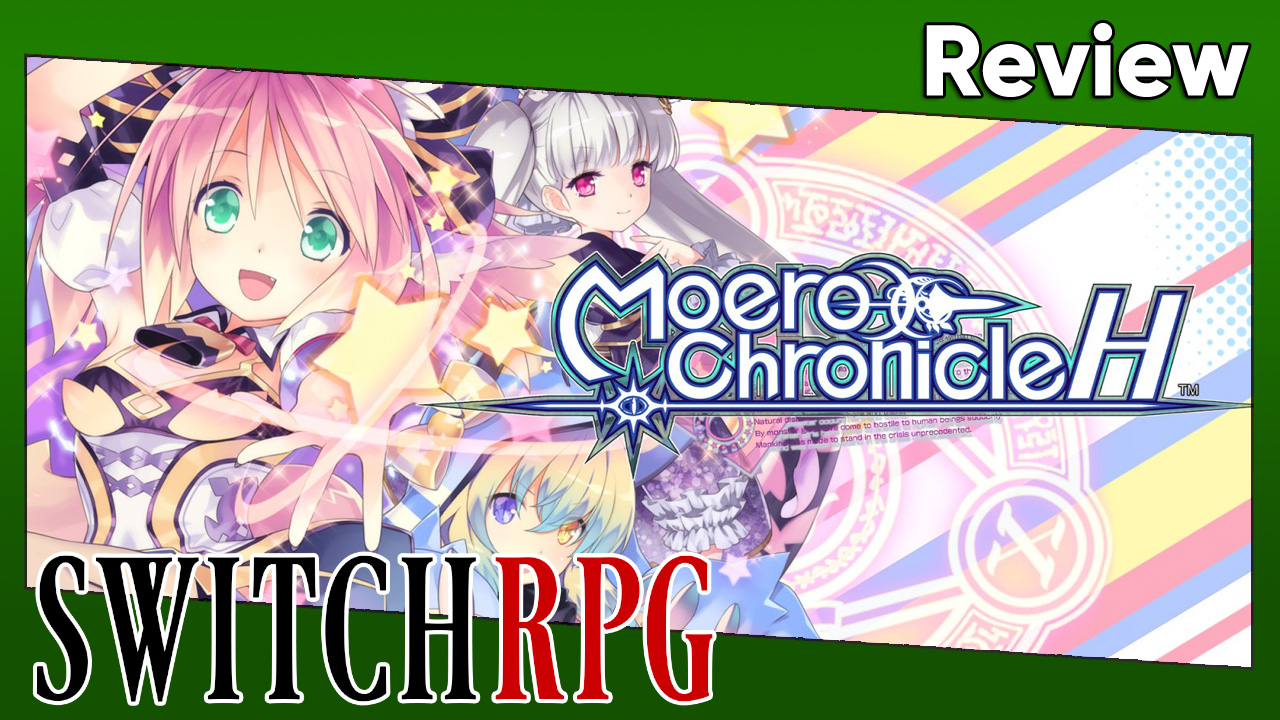 Io has a problem: he can’t stop having lewd thoughts about girls. It happens literally all the time, and he’s quite ashamed, honestly. It impacts his daily life so much that he has difficulty in any mundane task. If it so much as involves being near a woman, letting alone talking to one, he just CAN’T — but there’s one exception to the rule, his childhood friend and adorable Monster Girl Lilia, who interestingly enough is also immune to the strange issue afflicting most Monster Girls in the world. We join Io and Lilia on a most important quest, all the while diffusing the seriousness of the situation by breaking the clothes off of cute girls and rubbing down their still-covered naughty bits. I will urge you, dear reader, to turn away if you are put off by the lewd and crude humor that is a Japanese ero adventure, but if you’re up for a stroll through some pretty weird woods, I’m here to be your guide. 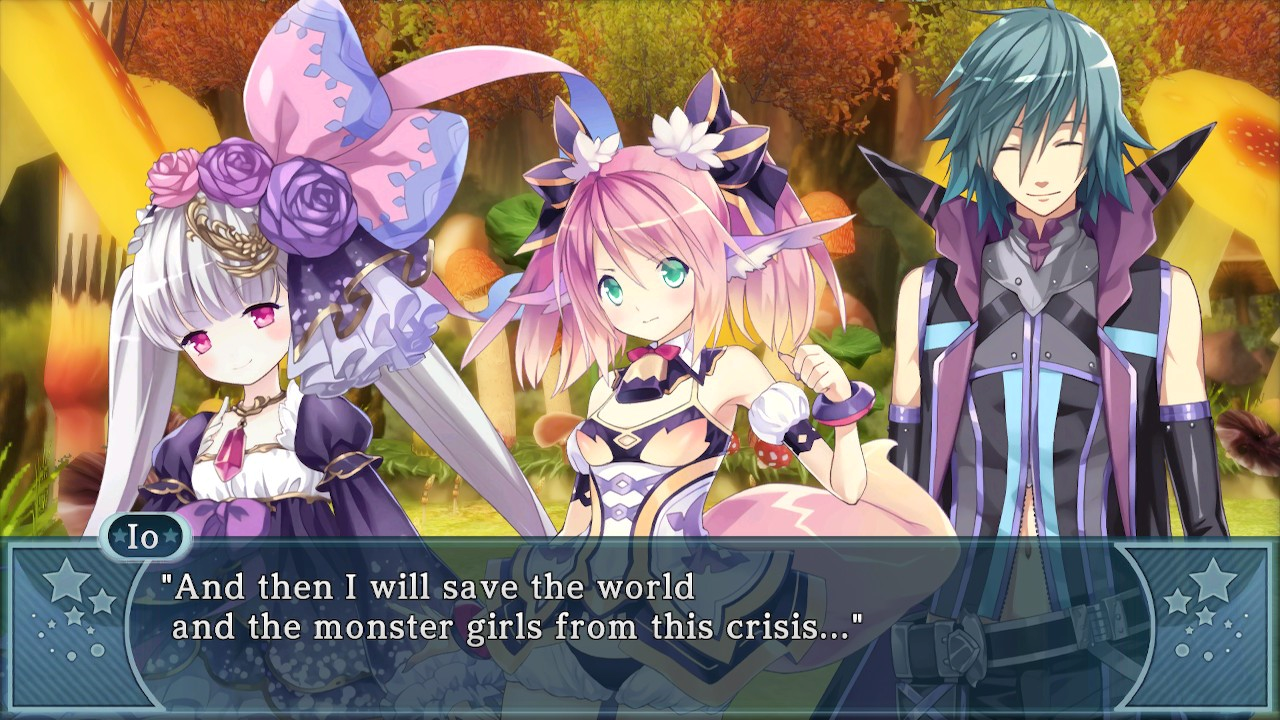 Io may not have been directly kicked out of his hometown, but the town’s elder forces him to go on a journey to save the world… And although anyone who has left before from other towns and villages never returned, Io is expected to be completely okay with this idea. Naturally, our ordinary protagonist is worried and, of course, a little put-off by this sudden development. Monster Girls have started to become hostile towards humans, with some sort of “Legendary Monster Girl” thought to be the catalyst for this deadly change of events. Io sets out along with Lilia towards Monstopia, a place where their childhood friend Leche lives, hoping to check in on her and see what’s going on with all the Monster Girls.

A bit of a problem arises though, when the violent Latte shows up. As the region’s Monster Girl leader, Latte tells Io in no uncertain terms to get out of her territory, and admonishes Lilia for hanging out with a human. Her air of superiority and overall demeanor seem to be on par with what the duo has heard about: Monster Girls are definitely way more violent, and something has to be done. Io wonders if they should leave, but before the interaction is over, a mysterious and downright perverted seal-type creature named Otton promises to guide them through the area safely and only asks for a small favor in exchange: he’d like to collect the discarded panties of all of the Monster Girls that he can find. While helping Otton, we come across our friend Leche, who also seems to be afflicted with the strange illness, but hers manifests as deep depression and anxiety. Otton has a plan though — and after having Lilia break parts of Leche’s clothing via combat, and Io rubbing her down rather lewdly, we are able to not only relieve the symptoms of our mysterious illness, but also entice the cat-like Monster Girl to join our entourage. 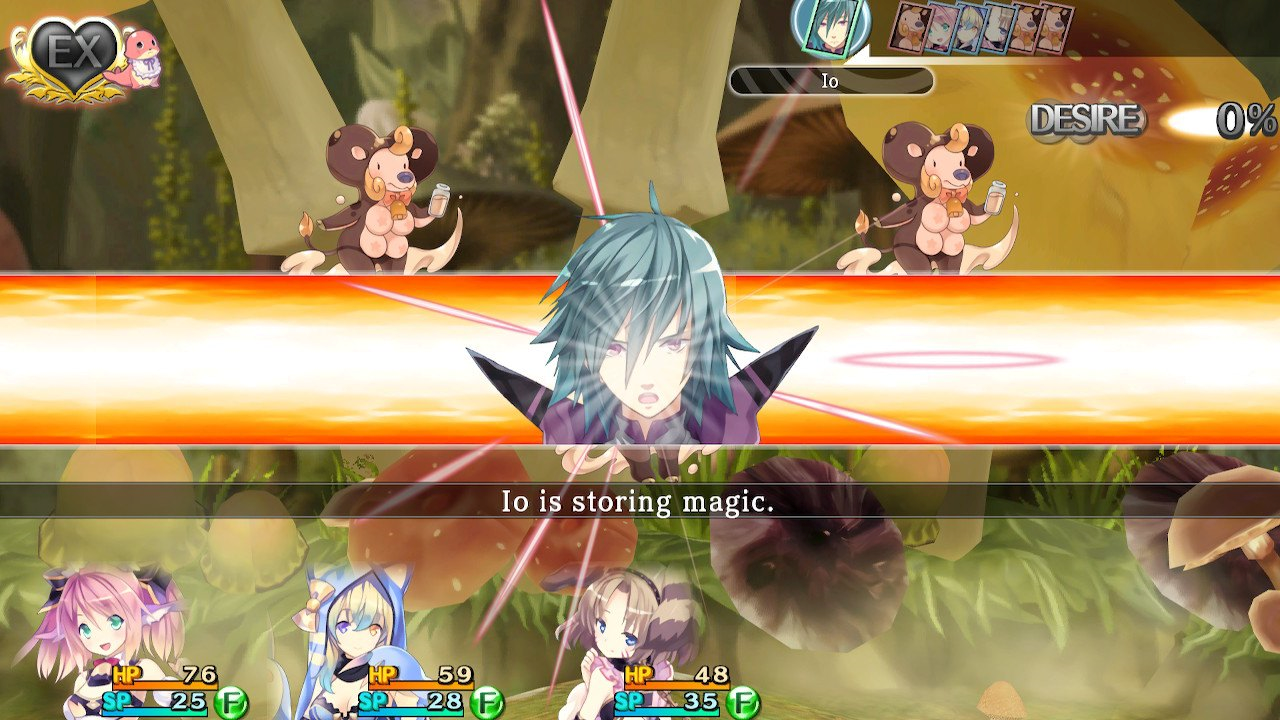 Dungeon crawling in Moero Chronicle Hyper is a straighforward affair: you move around in a first-person exploration mode, uncovering the map as you go in a Mystery Dungeon style. Items and battles can be found randomly as you explore, and save points can also be found throughout the areas. Save points also offer the ability to heal up your party, so they’re definitely something to not only find, but continuously be aware of when you need to go heal up in a pinch. Exploration is rather easy, and though there are some hazards to avoid on the field and a number of areas that may not be necessary to explore, you’re generally rewarded well for uncovering every corner of a map.

The combat system is simplistic, with a basic elemental system that’s mostly used for dealing extra damage to the costumes of the Monster Girls you try to fight and subsequently recruit. While I was able to mostly mash my way through regular enemies with just the attack command, the fights with the Monster Girls took quite a bit more strategy, which I honestly was happy about. Needing to think when dealing with a turn-based combat system is always a highlight.

Characters can be customized with equipment and jobs. Of course, this being a story about a pervert and his obsession with girls, classes are changed by equipping your monster ladies with one of four types of panties, much to Otton’s pleasure. While stats and abilities can’t really be tailored too much to your liking, the simplicity at least keeps things easy for swapping out which cute characters you’d like to keep in your main attack force. Did I mention that Io doesn’t fight, himself? He’s kind of like the world’s most useless male cheerleader, with a team of around 50 girls to cheer on. That’s right, there are 50 Monster Girls in total to recruit, and each of them has a few unique skills- and their own personality, of course. The player is able to interact with each of them while playing the role of Io to learn more about them and raise their affection levels. With over 50 fighters to worry about, selecting your main team becomes a bit rough — but everyone has their favorites, and even though this game is a bit much when it comes to fan service, its hard not to think these girls are pretty cute and lovable. 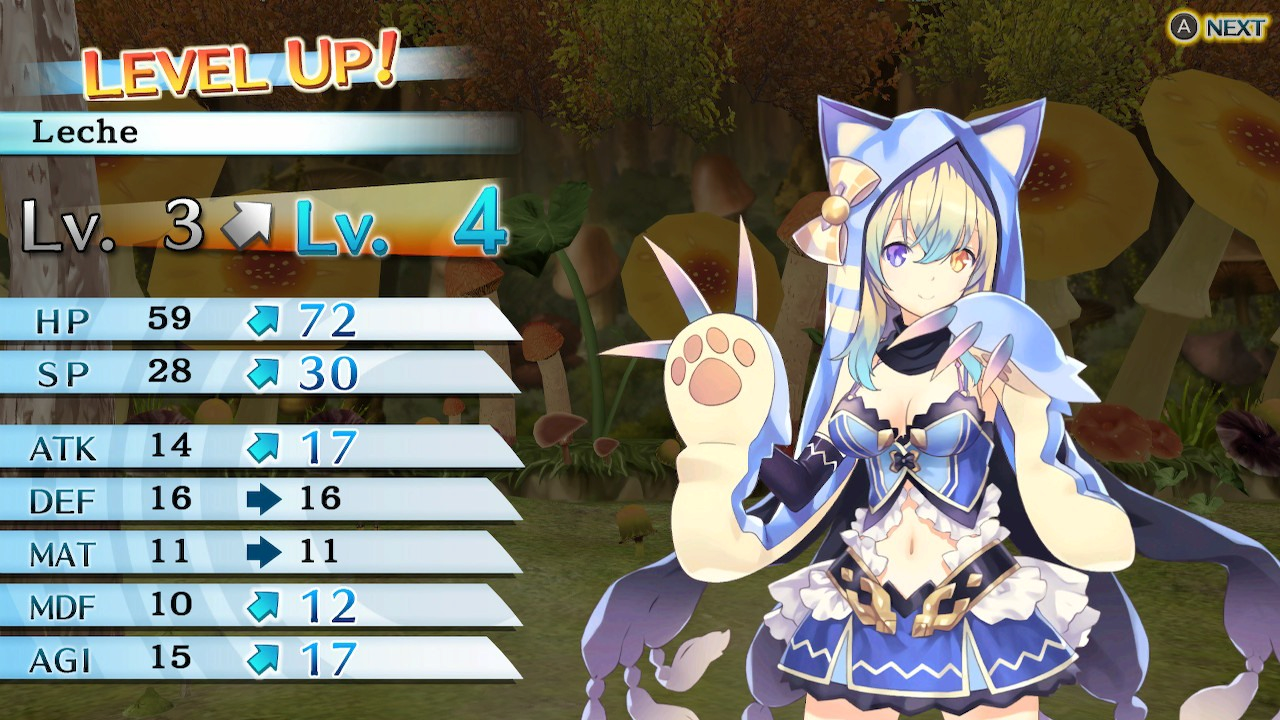 The animation for each character is incredible. The detail for each girl is fantastic, and the fact that every single one has a fleshed-out personality makes things even better. Interacting with them at the inn for personal events (and additional petting sessions) can be a little on the awkward side, but several of them are sweet and simply want to help one another out. The creatures you fight are hilariously crafted, with many of them being rather phallic in nature. Actually, I think pretty much every one of them is phallic in one way or another. In all honesty, I wouldn’t be surprised if almost every one of the regular enemies was created by some horny teenager, because when you see a smaller creature riding something vaguely sausage-shaped, your mind is definitely going to go places. You do have some regular Joes in there, like a Final Fantasy-eque bomb creature or two in the mix, but for the most part, its all dicks all the time. These monsters do have a chance at joining your team, and if they do, they can be assigned to one of your girls as a pet. This can grant them some additional effects, like slowing them in combat, or giving them a chance at bonus elemental damage to one or more enemies.

Tranquil tunes will play in most dungeon areas, the kind of which can make things feel a bit more leisurely than they truly are, but battle music will get your blood pumping. This game does a great job at letting the music set the tone, and along with well-crafted cutscenes and conversations that are weighted with intensity, the sound does its best to amplify what’s going on around you. Of course, there are also the creepy rub-down scenes, but the music always suits the activity, and you’ll definitely feel like you’re in a really weird harem anime. 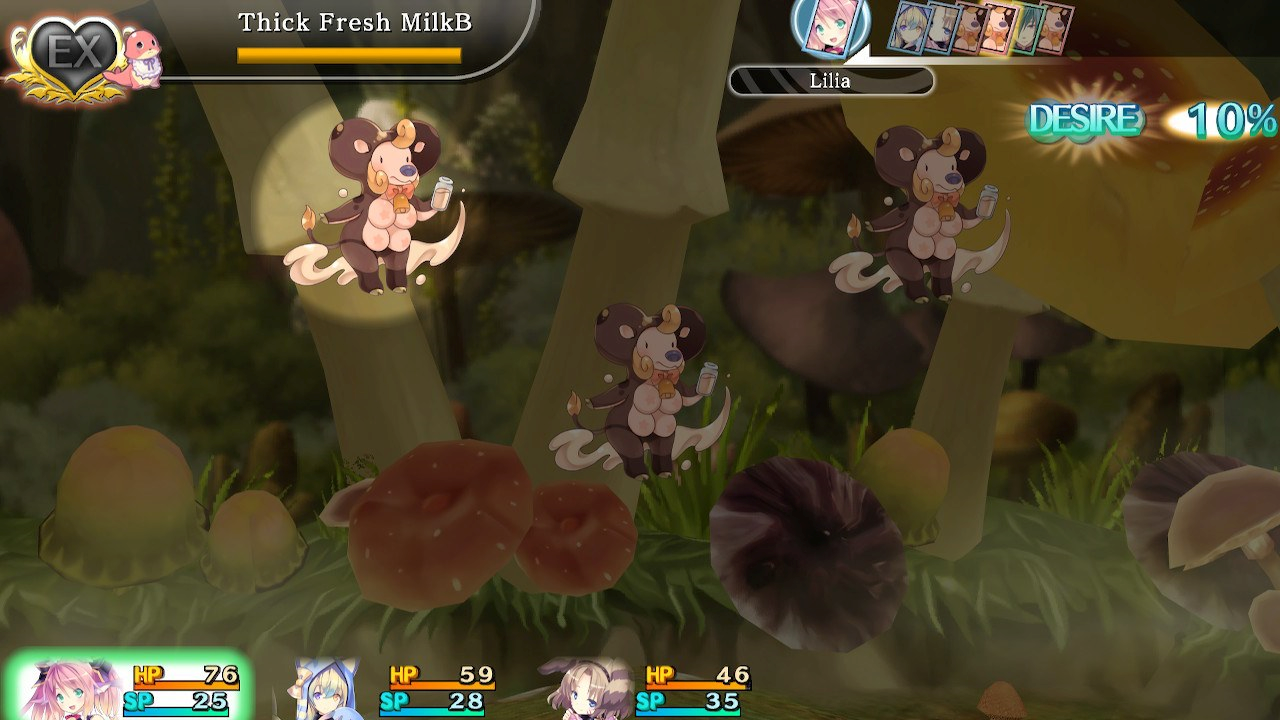 Moero Chronicle Hyper is a sexually charged adventure (and something I would have avoided at all costs as a younger woman,) but at its core it has a great main story, perverted characters aside. Otton himself can be annoying, and Io is about as useless as they come, but the game gave me enough about each Monster Girl to keep me invested in saving them. My empathy seems to have been weaponized against me in this story, so much so that I was definitely willing to rub these poor girls and return them to their senses time and time again. While I definitely wouldn’t play this game around kids or any friends that are particularly prudent, there’s a lot of value here and its worth checking out if you don’t mind fan service.