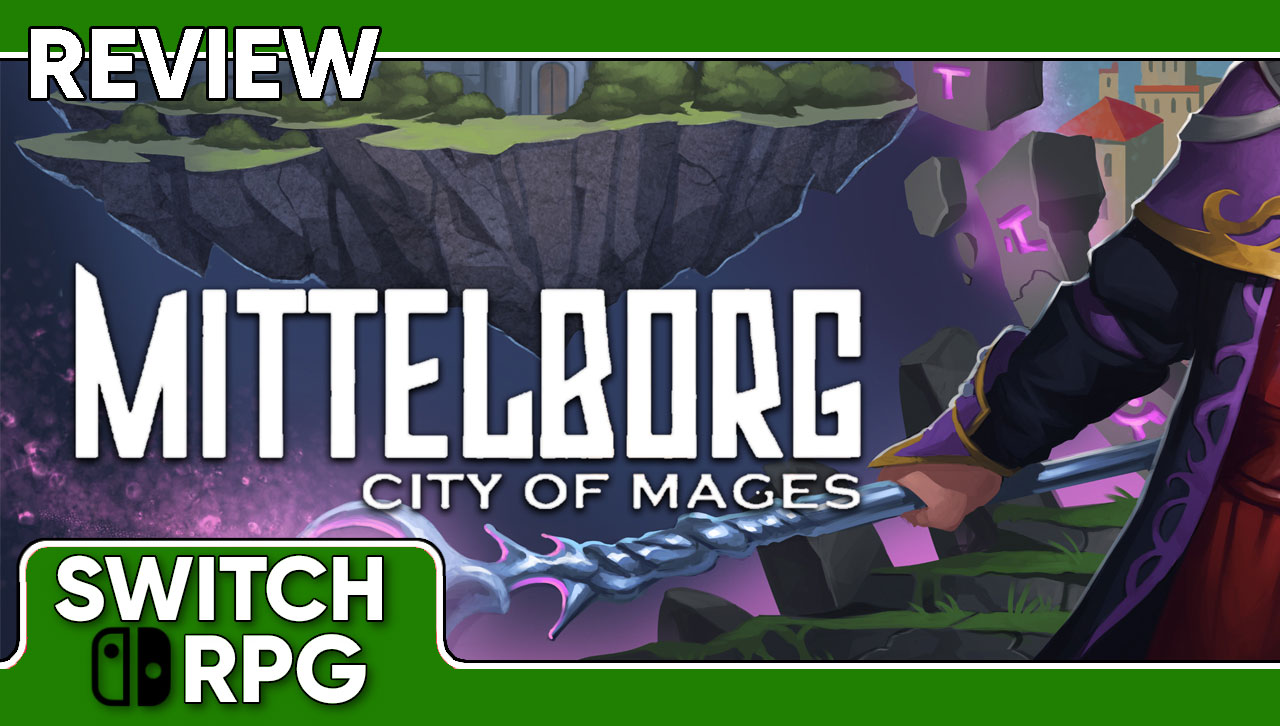 A city, held together by ancient magics, weathers the relentless storms of dark forces who constantly assault their gates. This city, resting in the void between worlds, watches as kingdom after kingdom, planet after planet, falls into oblivion. As the leader of Mittelborg, the City of Mages, you are tasked with managing the city’s dwindling resources, deciding the fate of citizens, and searching out the answers needed to end the cycle of death and foreboding.

A lofty premise, for what should be an appealing gameplay experience.

Mittelborg, City of Mages, from developer Armatur Games, offers a board game-inspired, roguelike-infused gameplay design, one that should have nerds large and small scrambling for their controllers. But where the core concepts at play in Mittelborg promise a compelling and intellectually challenging endeavor, the end result is anything but. Mittelborg struggles at almost every turn to deliver those elements which should make it a slam dunk. The final result is a troubled and unsatisfying experience that leaves a lot to be desired. 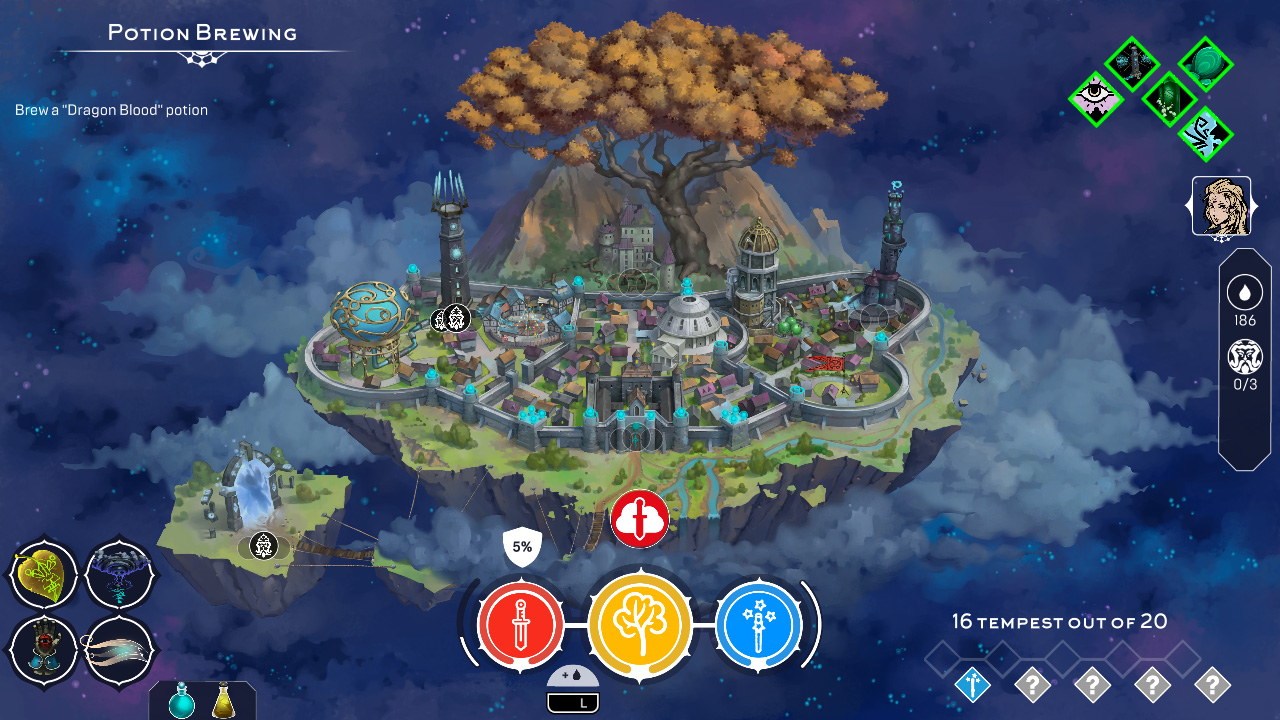 At the core of Mittelborg’s gameplay are the unrelenting “storms,” attacks on the city by mysterious outside forces. As the last bastion of power and refuge across troubled dimensions and worlds, Mittelborg MUST survive for life to flourish. The player takes on the role of the Chancellor, who manages the city’s resources to defend against each storm and take advantage of gaps in the fighting to build, explore, repair, and replenish supplies. Each storm is made up of multiple waves, represented by little icons in the bottom right of the main screen. Players can use the city’s main currency to predict the next wave in the storm, and allocate resources accordingly.

The primary resource here is, of course, mages. Represented by tokens that can be moved to different locations in the city, the mages’ power almost every activity the player can undertake. If a physical attack is headed for the city, the mages need to be deployed to the garrison to protect the troops. If a magical attack is coming, they head off to a different location to bolster those defenses. Should a breeze of magical energy be set to sweep through the city, another building can be used by the mages to collect vital energy resources. Finally, a lull in the storm affords the opportunity to send mages through a portal to another world, discovering artifacts, potions, relics, and other useful items that will help you rebuild the city and survive future storms.

Beyond these four core buildings, others can be built using the game’s currency to craft new potions, improve your ability to predict waves, acquire additional mages, and other key features. Meanwhile, your core buildings can also be upgraded to handle the deployment of multiple mages at each site. By carefully managing all these building and resource allocation elements, the player should be able to continue to survive each round, as the storms get more and more intense.

That point about the storms growing in intensity, however, is indicative of the major gameplay flaw in Mittelborg – the progression system is broken. No sooner do you upgrade your defenses, allowing you to prevent a higher percentage of damage, then the coming storms begin doing more and more damage, negating your progress. The cost of new buildings and upgrades goes up as the game progresses, too, making it less satisfying to build up vital energy reserves. It IS possible, through careful management and the strategic use of potions, to create a 100% defense on a given round and to build up a sizable stockpile of energy, but on the whole the progression system is unsatisfying, unrewarding, and unbalanced.

Even on my best playthrough, I felt like the game was working against me. There is even a feature where, if the game has deemed you to have created too many mages, it will alert you that your mages will start randomly dying, just to keep your numbers down. Thoughtful game balance is not present here – only brunt force. 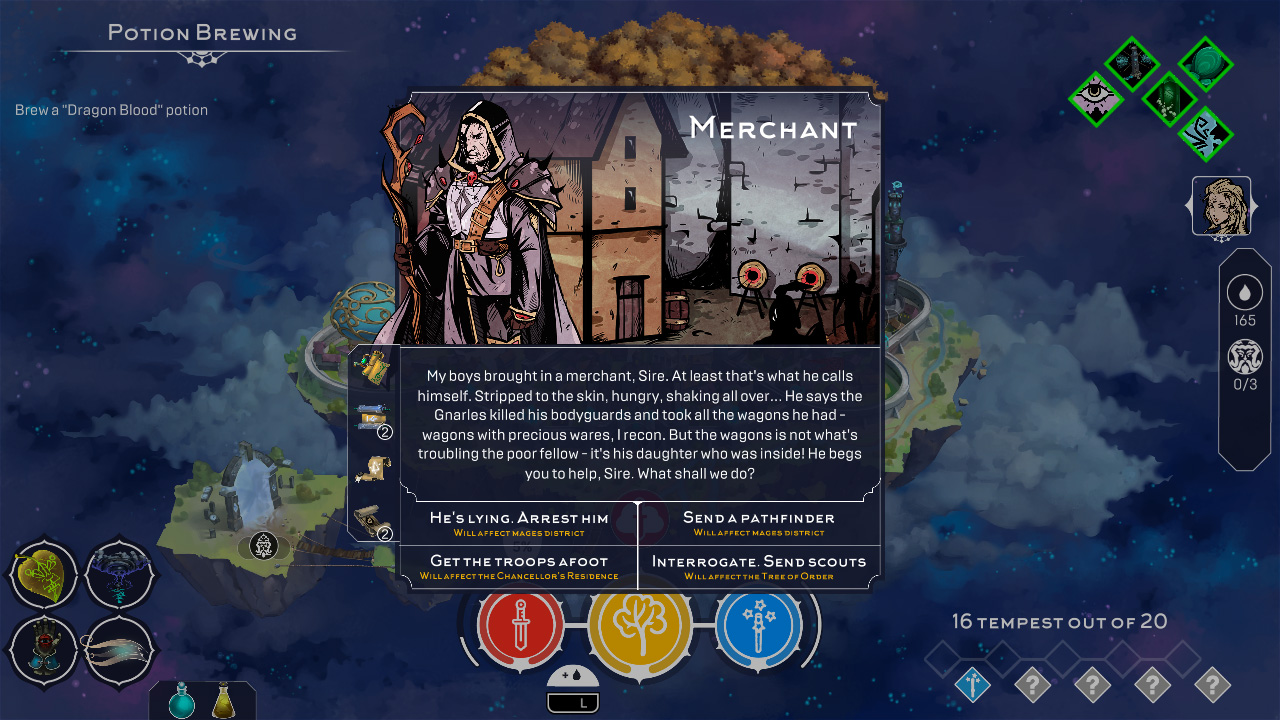 And what of the compelling narrative the beginning of the game sets in motion?

As the Chancellor of Mittelborg, you are tasked with protecting the city and handling many problematic scenarios that arise. These choices can pop up during expeditions through the portal or as a normal random encounter in the midst of a storm, and each scenario is presented as a multiple choice quiz on what the best course of action should be for a given problem. Except what choice is best, in many cases, cannot be logically thought out. There does not seem to be a single, driving philosophy behind good choices or bad. In fact, players are encouraged to use magical scrolls throughout the game that outright tell them the right answers (or just avoid the bad ones) removing any sense of gameplay and story integration.

The scenarios also create a problem when you consider the game’s roguelike elements. As you inevitably die and start a new run, you’ll begin seeing the same scenarios pop up over and over again with the same answers. As this keeps happening, rote memorization begins to be the name of the game, rather than thoughtful evaluation. Between the scrolls and the repetition, you have no incentive to use critical thinking or to get into the mindset of your character. It makes the story a complete wash.

And of course, if you do manage to survive to the end of a run, you may just be met with a “failure” cutscene anyway. Sorry, you endured the tedium of our game design and survived 30 storms and 100+ waves, but all you have to show for it is a bit of dialogue saying the city fell anyways, so now you can resurrect and try again. No thank you. 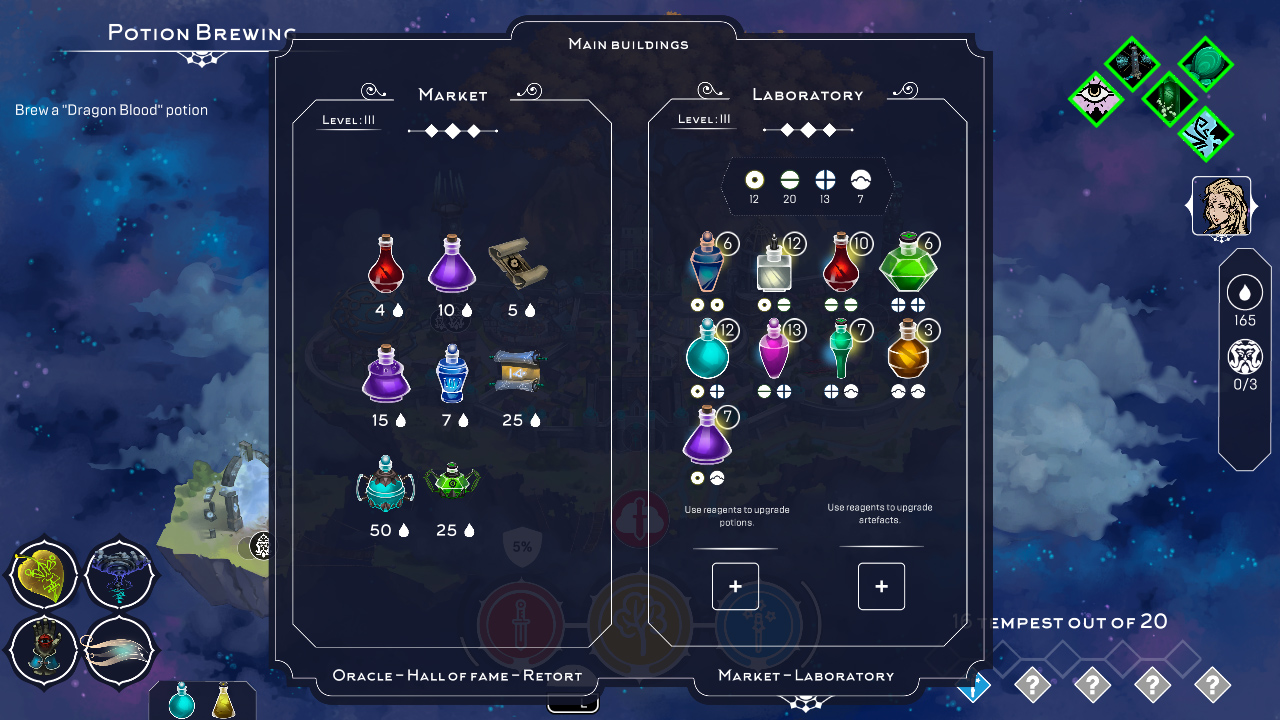 All these story and gameplay problems are, of course, wrapped in a drab and boring visual presentation. The in-game art is grungy, dark, medieval, and muddled – and by no means visually appealing. Sound effects are about as by the book as they come, and what music is there is equally drab and uninspired.

On top of all that, the game suffered tremendously from the port from PC to console, with no consideration whatsoever for the text size. Even on my large, living room television the text was extremely difficult to read. Reading item and scenario descriptions is tedious, and as for the longer-form “journal entries” that sometimes pop up when certain objectives are completed – those I began skipping entirely.

As a final cherry on top, visual glitches are also present, as one particularly long storm had wave icons running off the right-hand side of my screen, leaving me unable to read the preview text to see what was coming. Lovely. 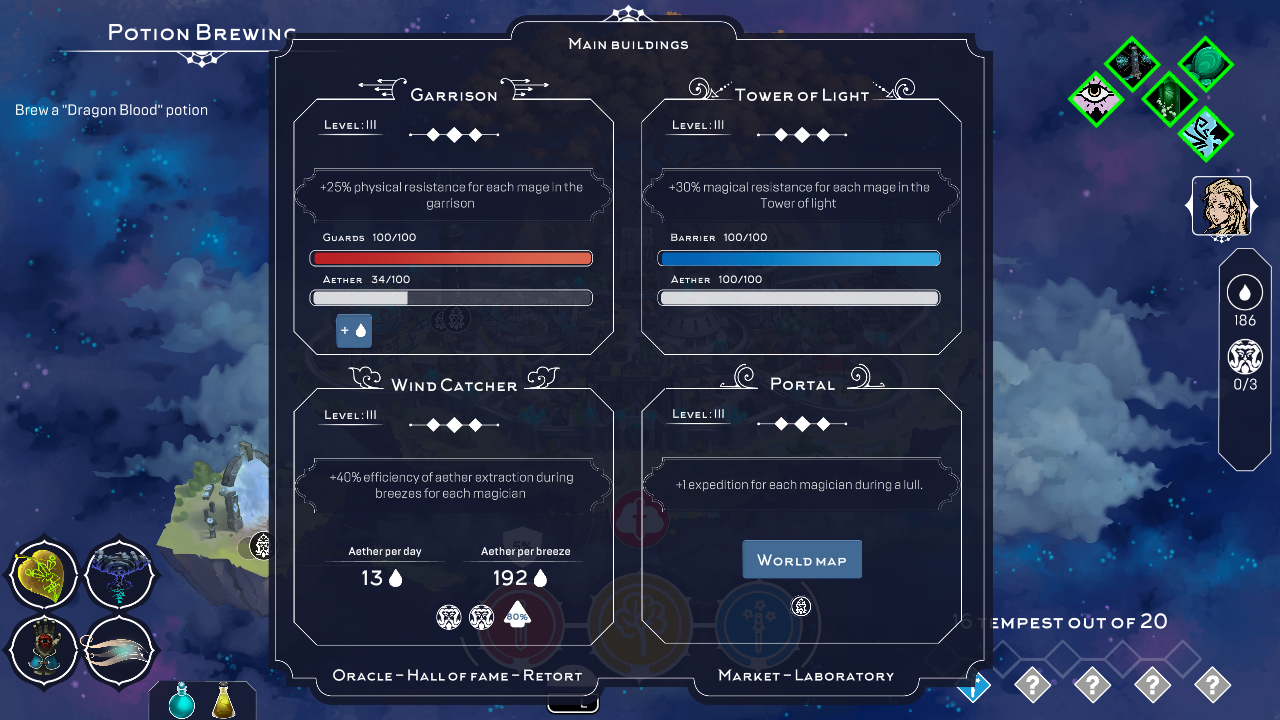 Added all together, Mittelborg fails to provide anything of interest or quality. Boring gameplay, unsatisfying progression, tedious menu text and controls, poor narrative implementation, and no real sense of accomplishment to be had, even when you do “succeed.” If you had this game on your radar, I can confidently assure you that this is a safe “skip.” There are better resource management games, better RPGs, and better roguelikes all over the eShop. Try one of those, and leave Mittelborg in the deep depths of forgotten history, where it belongs.