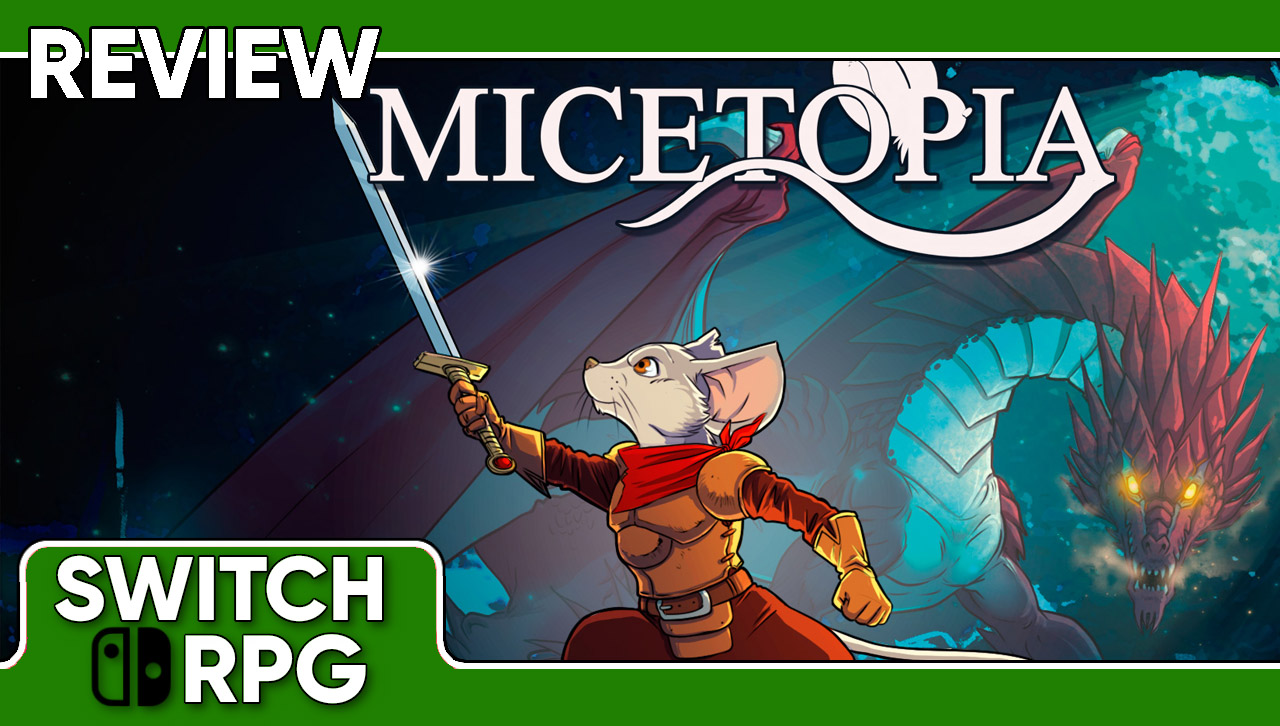 In a world where the cat and mouse feud is to be expected, it is nice to find a tale of mice just doing “mice” things. And by that, of course, I mean saving the world. Micetopia is a simple Metroidvania developed by Ninja Rabbit Studio and published by Ratalaika Games that pits a lone mouse against seemingly insurmountable odds. Everyone loves an underdog story, but is this one worth your time? 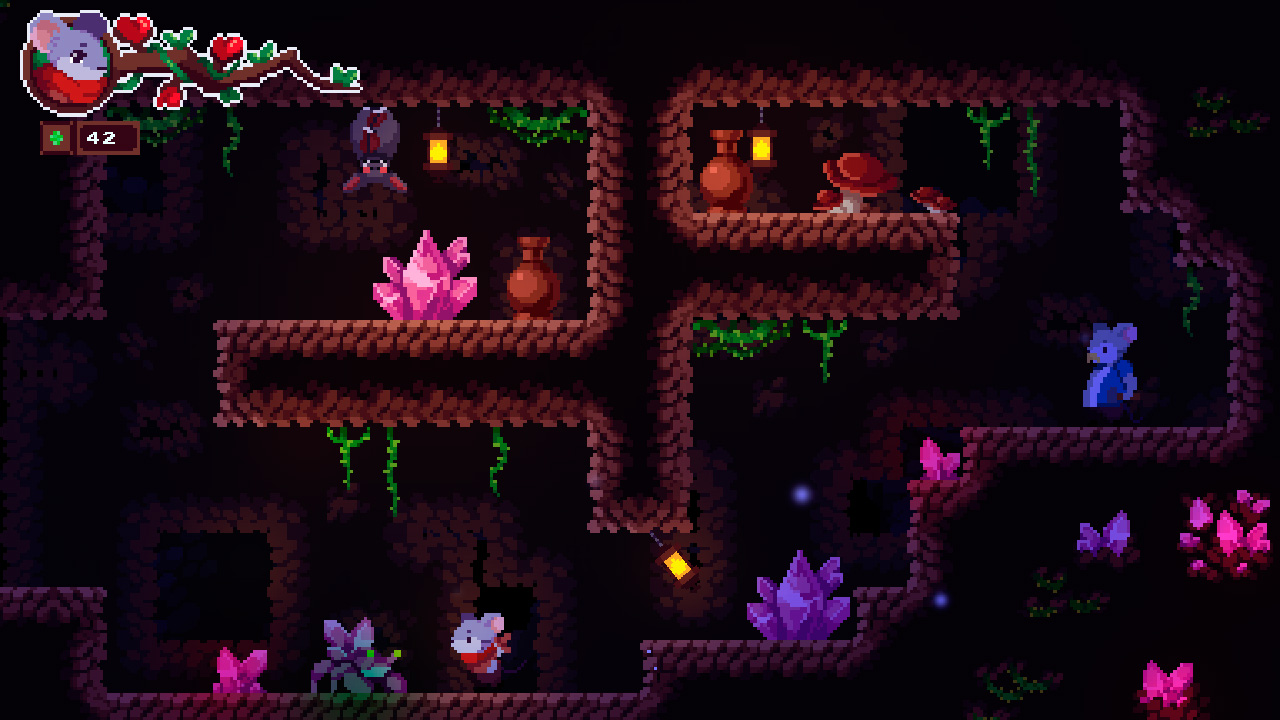 A medieval countryside village has been raided, leading to the kidnapping of its inhabitants and leaving the town fountain in disarray. Fortunately, the village elder is spared, and he seeks the aid of the game’s hero, Rich, begging him to enter the caves west of town in order to rescue the villagers. Armed with the shortest sword you’ll ever see, Rich sets out towards the caves, slowly repopulating the ghost town as he uncovers those in distress within the mysteries of the caverns.

Micetopia is barebones in terms of plot, but this does mean that it doesn’t bog the player down with nonsense either, instead allowing them to jump right into the fray. Villagers that are rescued will provide a bit of dialogue before taking their places back at town, but none if adds any meat to the plot. Following the trend of wanting more, the game ultimately ends abruptly and unsatisfyingly, when there’s so much that could have been done to bolster the potentially interesting tale of a hero mouse. 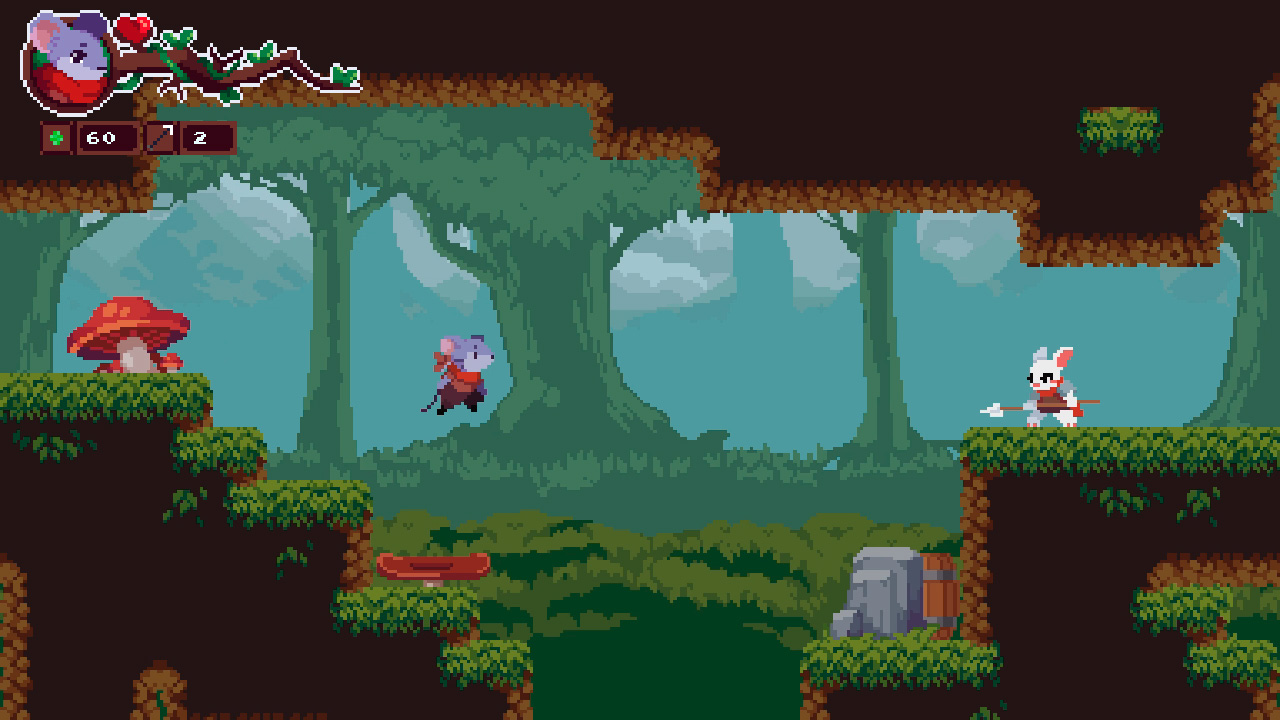 Being a Metroidvania, Micetopia has Rich scouring dozens of individual screens in order to defeat enemies, find power ups, and rescue villagers. Depending on the path taken, one may come across certain obstacles that are impassable until a specific power up is unlocked, meaning backtracking will be necessary from time to time. The game provides no efficient means of traveling between different areas, and dying will place you back at the previous checkpoint, which can often just mean starting back from the village again.

Rich is capable of swinging his sword and eventually firing arrows from a bow in order to dispatch enemies. Both are relatively straightforward in function, but can feel a bit limiting in comparison to other games in the genre. The reach of his sword, for example, feels quite short and can take some getting used to before you feel comfortable with it. And even then, questionable hit detection can lead to situations where Rich is instead hit when it really felt like the opposite should have happened. The bow is the only means of attacking at range, but requires the player to be stationary in order to fire. This makes its usefulness limited at best, but is still handy at taking on some of the more troublesome enemies, like those blasted mushroom frogs and spear mice with ungodly reach. 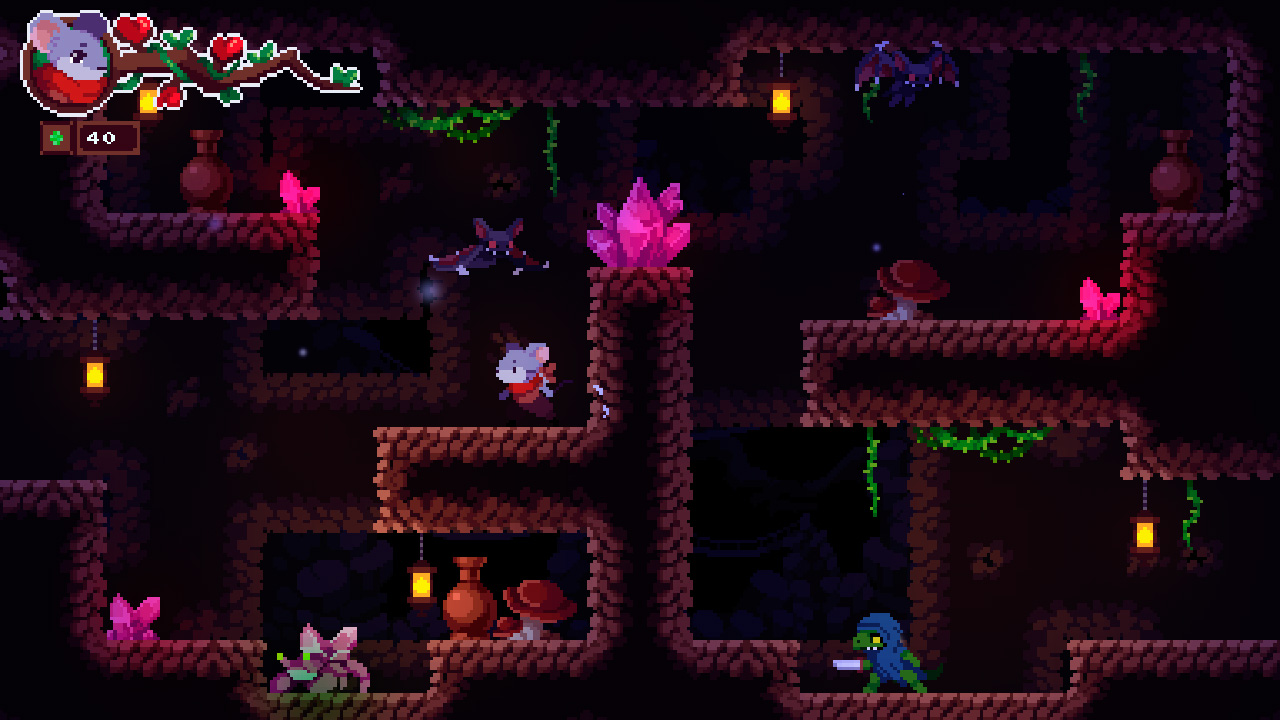 Both basic enemies and bosses follow simplistic patterns, so the real difficulty comes from, again, getting used to the range of the sword swings. There are only two unique biomes and a handful of different enemies in the game, so it really takes no time to experience what the game has to offer. Enemies drop green gems when defeated, which can be brought back to town and used in a few different character upgrades once the required villagers have been rescued. There aren’t a ton of upgrades, however, and the few that are there require a ton of gems to unlock. Overall, the gameplay feels decent enough, but is extremely simple compared to what other games in the genre have to offer.

The best part of Micetopia, hands down, is its art style and music. Using clean, simple pixel art shading and a catchy chiptune soundtrack, it feels rather inviting to fans of the 8 and 16-bit eras. The parallax scrolling of the hilly countryside is a nice touch, as well. It is for these reasons that the environments and its inhabitants look great despite the aforementioned lack of variance. The sound effects are not bad either, but the Mickey Mouse-esque jumping effect does get a bit annoying after a while. Most importantly, Micetopia sports a rock-solid frame rate that should accompany any Metroidvania / platformer worth its salt. 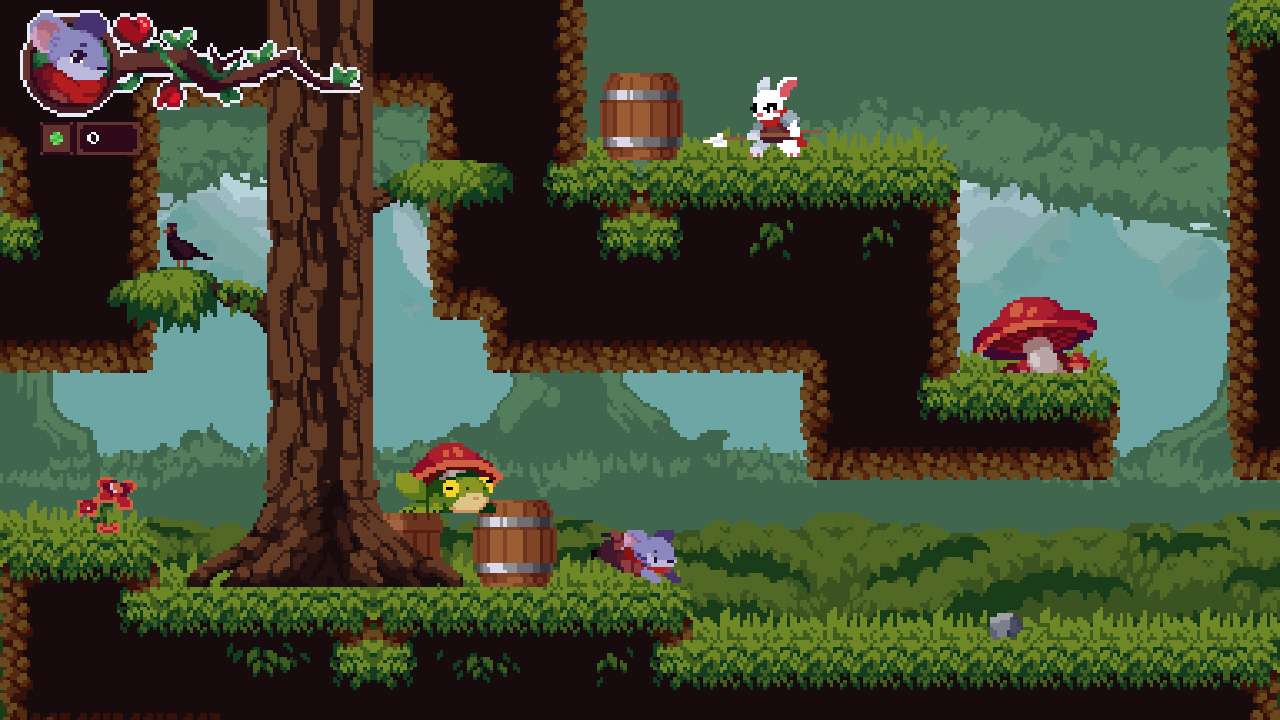 As it stands, Micetopia feels best suited for newcomers to the Metroidvania, or veterans that desire a very quick fix. It can be completed in only a few hours and provides very little reason for repeat playthroughs. While I can appreciate the beautiful presentation and budget-friendly price tag, there’s simply not enough content here to recommend it to the average consumer. While the ending leads you to believe that a sequel may be possible in the future, it will need to expand on its offerings in some way in order to make any sort of noticeable wave on the eShop.