Merchants of Kaidan bills itself as a “trading game infused with RPG elements”,which is only half correct. It is definitely a trading simulator of sorts – the main focus of the game is to complete quests by buying goods at low prices and selling them at higher prices at various locations. On the RPG front, it’s no more an RPG than Zelda – regardless, we’re reviewing this trading simulator that likes to moonlight as an RPG Thursday through Friday nights at the place down the road.

Merchants of Kaidan starts off soundly enough. At the start, you get to pick from four different game scenarios. The first, titled Ollivean De Calinn, is the obvious story-driven campaign. The rest are either time-boxed or currency-focused playthroughs. Your journey as Ollivean De Calinn starts in Dunlaar. Eager to set out on your own, you trade in your family ring for 4000 gold with dreams of working your way up the traveling merchant’s ladder, just like your father before you. Merchants of Kaidan has a lot of hopes and dreams, but instead only delivers nightmares and frustration. While the story and art-style are well done, the gameplay falls very short and borders on being a part-time job. 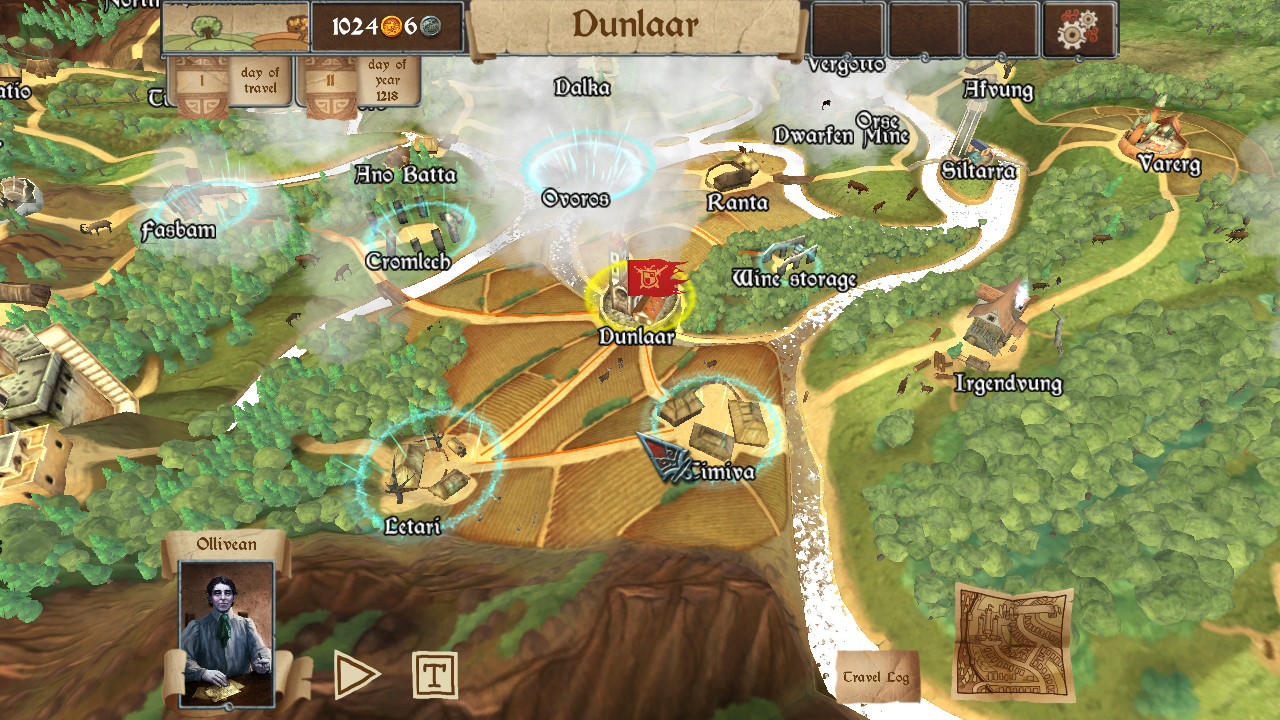 The core gameplay in Merchants of Kaidan consists of traveling around the world buying and selling goods with hopes that you’ll be able to make enough to keep the vicious buying and selling cycle going. Each city has its own description and place in the world, and I really like the way the map is drawn and laid out. You spend a lot of time traveling around the map, so having it be pleasing to the eye is fairly important. Right away, I noticed the islands to the North as being unreachable, and this made me interested from the start on what’s there and what other secrets could be found.

Since you’re a new merchant just starting out, only a few tradeable goods are available to you right away. Unlocking all the goods requires you to complete the merchants “rank up” quests. For instance, the registered trader quest has you trade a certain number of goods between the Barbarian and Empire lands within 50 days. If you don’t succeed at first, they can always be retried – these things are not easy. After playing for 2451 in-game days, I gave up on completing the registered trader quest for a variety of reasons that will soon be explained. 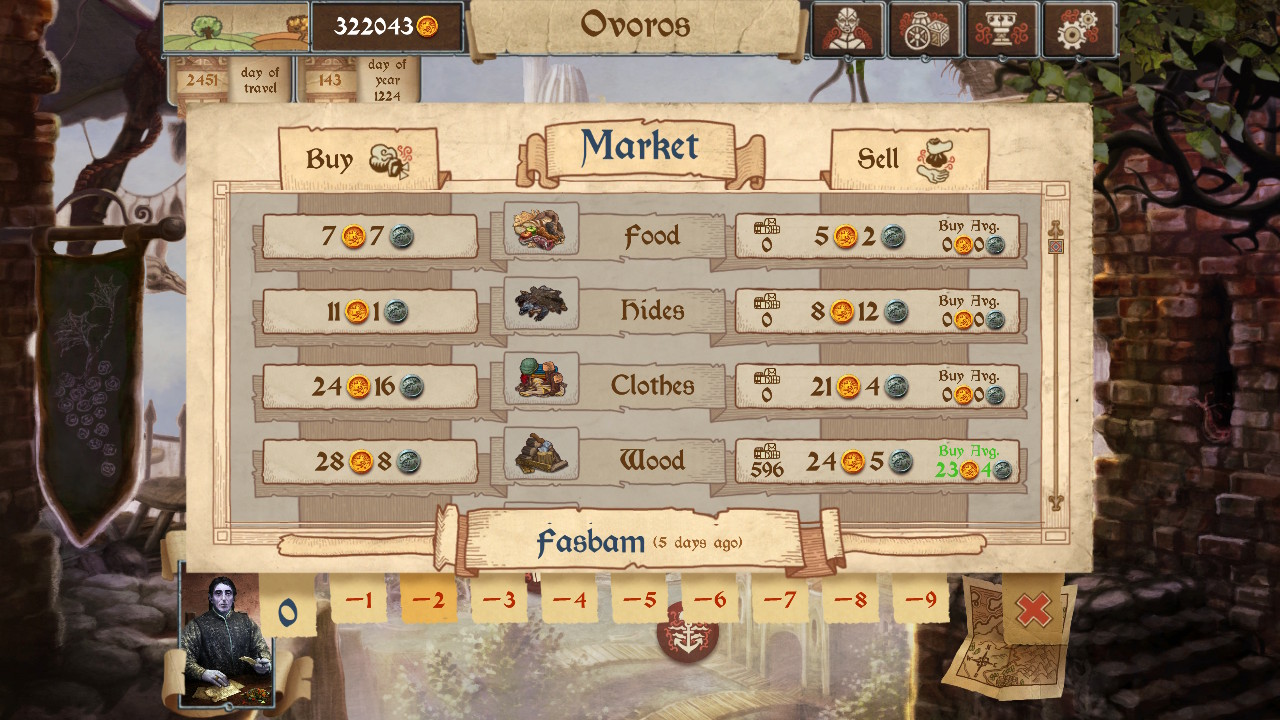 During this merchant quest, Merchants of Kaidan had me buying and selling goods with different regions of the map, except that these regions of the map are not labeled in any fashion. I was left to stumble around, buying and selling with what I thought were Barbarian or Empire cities, only to find out this was not the case, failing my currently assigned quest…again. A few boundaries drawn on the map couldn’t hurt, right?! Considering most of these quests are time-boxed, there’s not a whole lot of time to experiment with what’s what here. Just more of the same erosion of player choice with Merchants of Kaidan coming out on top.

Merchants of Kaidan sports a paged interface that you can use to view prices from the past nine cities. The idea is great, and I was eager to dig into this one as the game description looked like it would be fun to amass a traveling merchant empire. What they didn’t tell me however, was that buying and selling goods boiled down to flipping from page to page, looking at numbers, flipping more pages, and looking at more numbers. If it sounds boring, that’s because it is. Instead of being entertaining it’s more like playing with a series of excel spreadsheets instead of an actual video game. This is where things start to go downhill fairly quickly as we find out about random events and fluctuating prices. 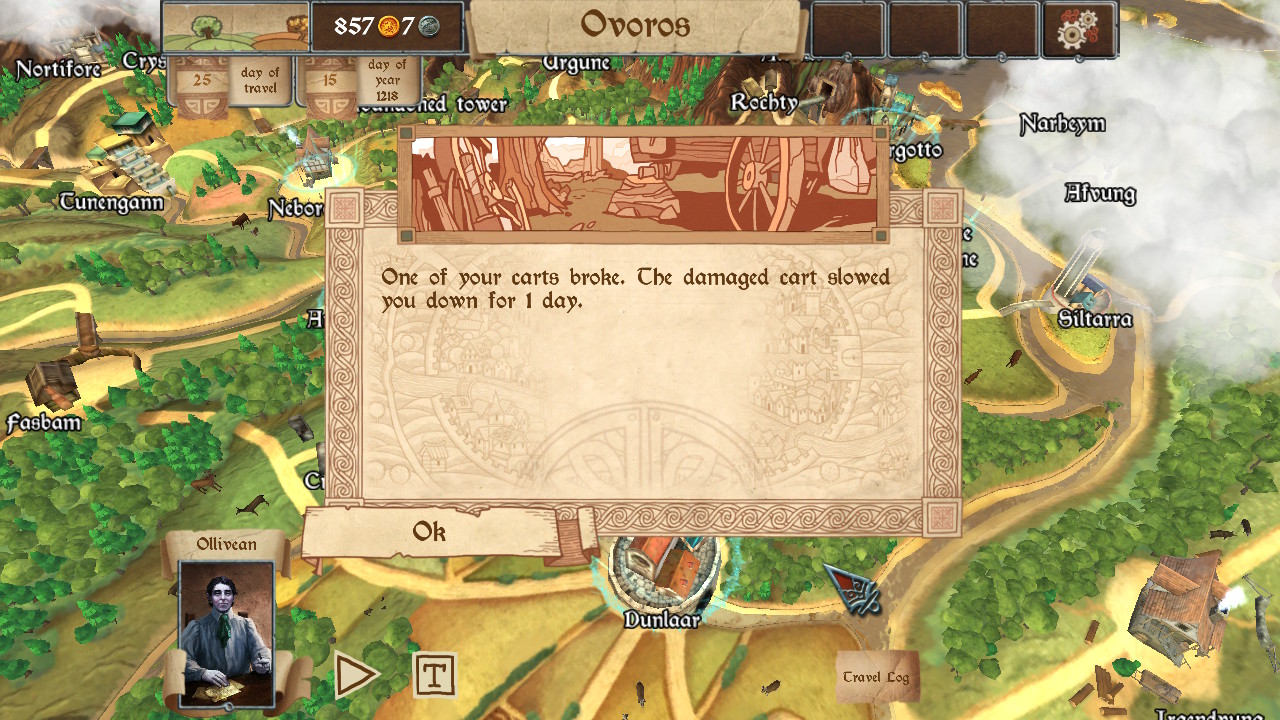 Merchants of Kaidan is chocked full of random events. In today’s gaming world, terms like “procedurally generated” are all the rage. Randomesque game mechanics exist to make sure the player doesn’t get bored with repeated game mechanics and the infamous “grind”. These mechanics are mostly well known amongst Roguelike players where a game lives or dies based on how enjoyable the grind feels.

Random events might work well in certain genres in certain types of games, but when it doesn’t work it just seems like the game is destroying player choice, and that is exactly what I feel like when playing Merchants of Kaidan. It feels like the game is destroying my player choice and inserting its own randomness which inhibits my ability to produce successful outcomes. This is definitely not what you want to happen in any video game, unless you’re in Vegas hoping to hit that jackpot. 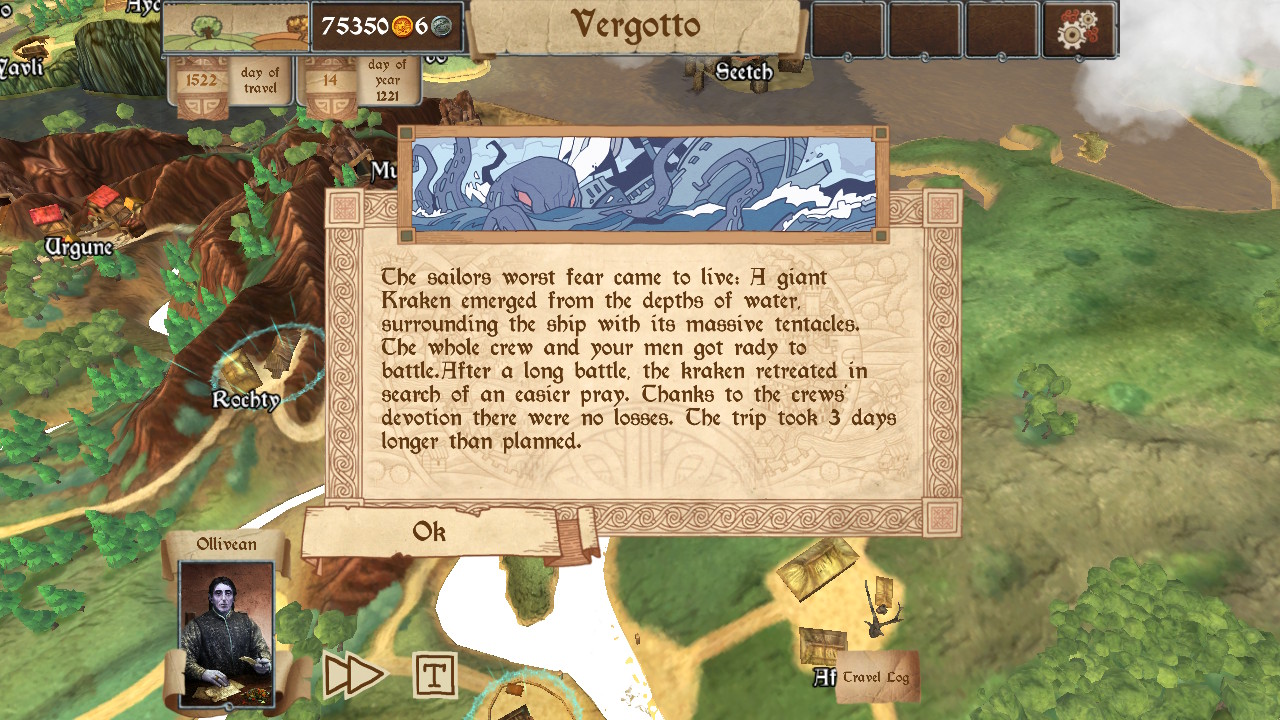 This erosion of player choice masked under the guise of random events is best seen in the most core gameplay component of Merchants of Kaidan: the goods trading system. When starting a new scenario you have the option to enable a “realistic price model” (AKA easy mode). I’m not sure what kind of trading game you want to play, but if the option to enable realistic price models is an optional setting, then maybe we’re all doing something terribly wrong.

I would expect a trading simulation game to follow some sort of supply and demand algorithm, but without easy mode enabled it seems like the buying and selling prices of goods are left purely up to chance – most often at the detriment to the player. This is nonsense, and this feeling becomes pretty apparent once you start getting into the game and can’t sell that big load of food you picked up at 9 gold per piece, even though that’s a fairly good price. The game is stacked against you constantly, and there just feels like too wide of a variance in prices without “easy mode” enabled that it feels like the game is constantly cheating you out of your hard earned gold. There is no player choice here, just player defeat. 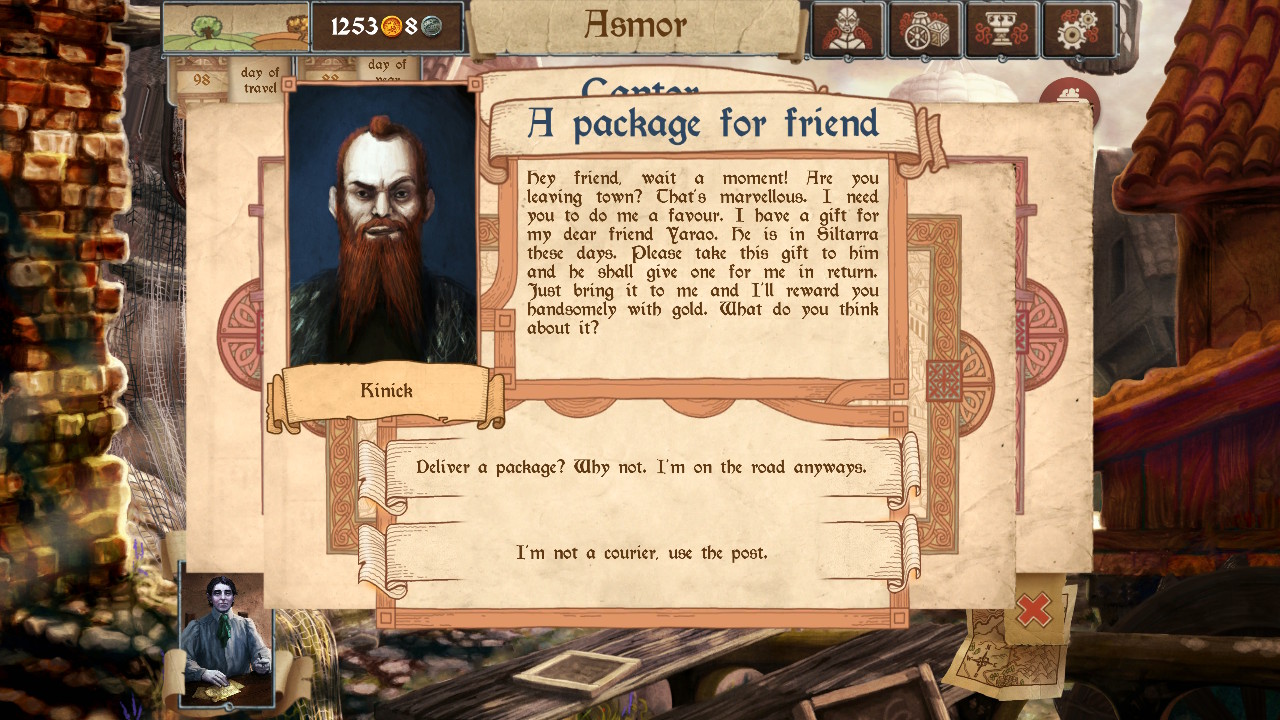 After a time of buying and selling and journeying on the traveling roads, you will encounter other NPC adventurers wishing to go various places. These show up as side quests and are actually fairly entertaining and a nice addition to Merchants of Kaidan. These side quests have you going from place to place delivering key items or people.

Unfortunately, it never seemed like the reward for these quests was worth it in the end, but I was happy to complete them based purely on the lore and stories they would add to the game as a whole. You can also hire specialists which can accompany your wagon train adventures. These specialists help you out with various tasks, such as automatically repairing your wagon every time you break a wheel. Overall, they are a nice addition to the game, and since you can only have a certain number of them they actually provide the player with choices on who they want to have accompany them.

Merchants of Kaidan also suffers from a technical perspective. When both loading up saved games or starting new ones, the game takes an awfully long time to load. I even had the game freeze more times than I’d care to count when loading up my saved game. Thankfully, this gave me enough time to evaluate my game choice for the night, and often times led to me playing something else more worthwhile. It’s also apparent that Merchants of Kaidan is a game ported over to the Nintendo Switch as there is a mouse cursor that can be controlled with the left stick that lingers on the screen on occasion. You don’t have to use it, but it’s there if you’re a stick kind of player. I have to give Merchants of Kaidan credit where credit is due though. The game fully supports touch controls and can be played purely by the tips of your fingers which is, unfortunately, a rarity in the Switch world. As such, Merchants of Kaidan feels best played with touch controls, likely due to its roots as a mobile title. 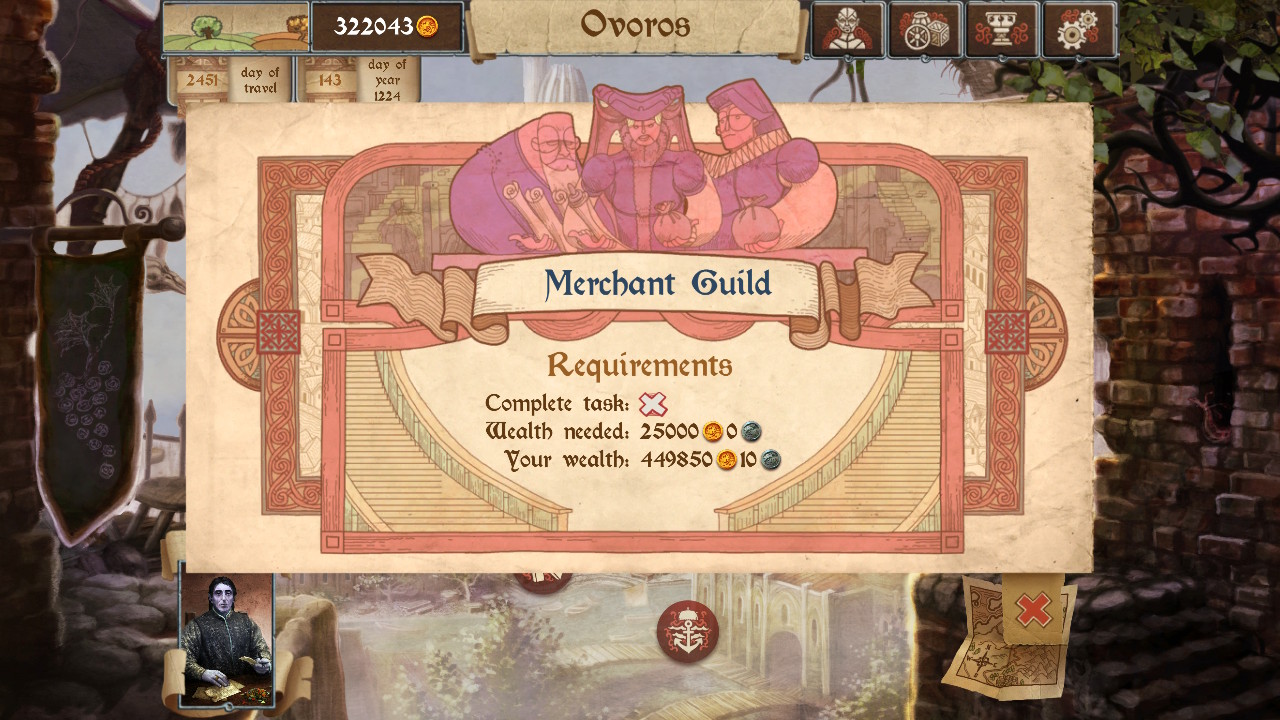 I’ll admit, there’s a lot to Merchants of Kaidan that I was unable to reach for this review. The game was excruciatingly painful to play for me, as if it wasn’t apparent enough above I really did not enjoy this title even though I really wanted to. I gave this game more hours than it currently deserves. If anyone would like to assist me in this endeavor, I will happily listen to your tips, although current discussion posts on Steam have been little to no help.

Truthfully, the help needs to come from the developers through fixing things like unlabeled maps and horrible RNG systems. Games should be fun to play, not feel like you’re an investment banker reviewing spreadsheets for hours on end, which is why the game is hereby awarded the infamous SwitchRPG BAD rating. While Merchants of Kaidan may be more fun than your day job, there are better video games to play.

This reminds me of Recettear (a superior game, by inference from this review). We need more Item Shop games that have depth!

Running the store is usually not enough to make this type of game interesting.

There needs to be a compelling mechanic to accompany buying/selling. Recettear had action-rpg dungeon diving where you could get goods to later sell and help generate seed money. It is incredibly meaningful when you go deep into a dungeon and retrieve a very expensive treasure and put it for sale in the shop window. Much more satisfying than just buy low/sell high by itself.

Huh. That reminds me of a certain other shop-managing action RPG released recently on Switch…