It seems like only yesterday that BioWare released their medieval epic, Dragon Age, to the masses – the same moment which spurred my love for really digging deep into the lore of game worlds. Since then, I’ve found that few games, especially those of the indie variety, pull off that same (or similar) feat of creating a dense, compelling game world worthy of buckets of dialogue while also encouraging the player to dive deeper with supplementary journal excerpts. Masquerada: Songs and Shadows is a budget-minded title that really sells itself on its world building and characters – and does so well – but is that enough to make up for its shortcomings? 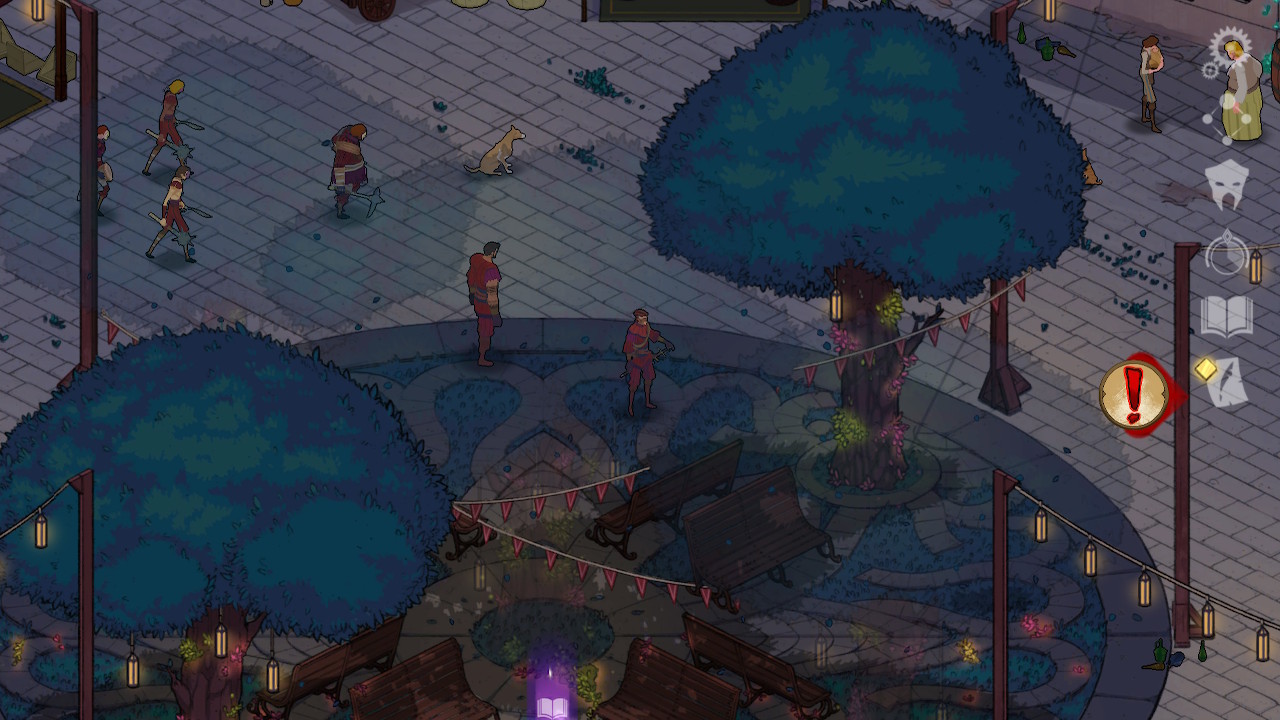 Masquerada is based around a large city known as Ombre, one thats very essence is heavily inspired by the culture of 15th and 16th century Venetian masquerades – events where the attendees would don ornate masks. In real life, these events and celebrations were often reserved for the high end of society, but not always. Similar to that notion, at a base level, Masquerada centers its world around these masks but takes it a step further, using them as a permanent divisive tool between political and social factions.

If these masks were simply cosmetic pieces then this whole concept would be dumb, however their wielders are capable of harnessing the elements to their will, granting them capabilities far beyond that of a normal person (known as the Contadani). While the appeal of living the “royal life” – full of fame and fortune – is real, not everyone is accepting of the luggage that comes alongside the masks. Uncle Ben’s “with great power comes great responsibility” isn’t too far off the mark here.

Ombre’s citizens can be classified in one of three categories: the aforementioned Contadani (or “maskless” commoners), the Masquerada – “nobles” of sorts, divided further into the Registry and Seimora – and the Maskrunners, those which illegally utilize masks without pledging allegiance to one of the noble houses (rogue factions). Masquerada focuses on Cicero Gavar, an ex-detective for the upper echelon of society, the Registry, that was exiled from his home five years prior for turning a blind eye to his own brother’s misdeeds. 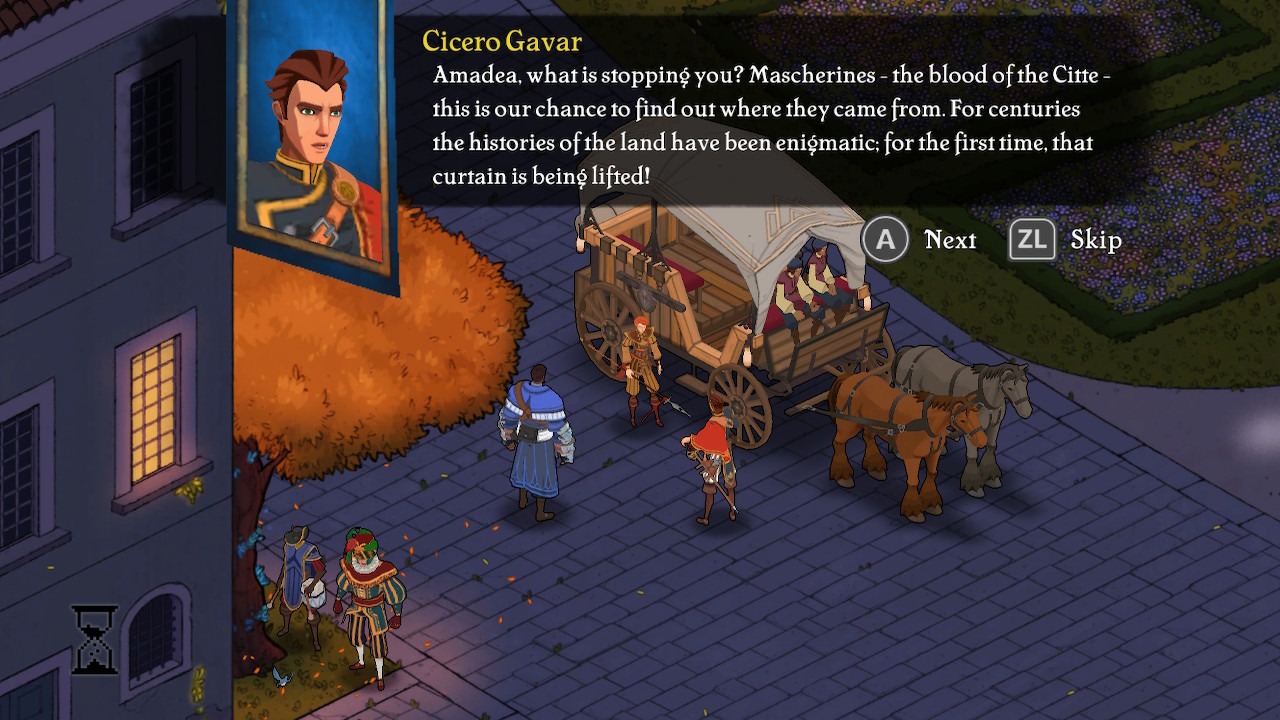 Pulled back into the city that never sleeps, Cicero returns to his old stomping grounds to answer a plea for help. Razitof, a member of the registry and dear friend of Cicero, has gone missing, and the powers that be would have you dive right back into the political and social scene – that has all but come to a head by this point – in order to find him. Besides the healthy monetary reward offered for this endeavor, Cicero feels partially responsible for the turmoil as it was his own brother which, years before, helped equip these rogue “Maskrunners” with gear in the first place.

On top of that, Razitof himself is the key factor in why Cicero was not hanged for his “treachery”, instead merely exiled. Regardless, it doesn’t take long for Cicero to realize something is definitely amiss, and that the political and social environment has not changed one bit in tone since years ago – in fact, if anything it has never been more clear that old habits die hard, and many of those who hide behind the masks are not who (or what) they seem. 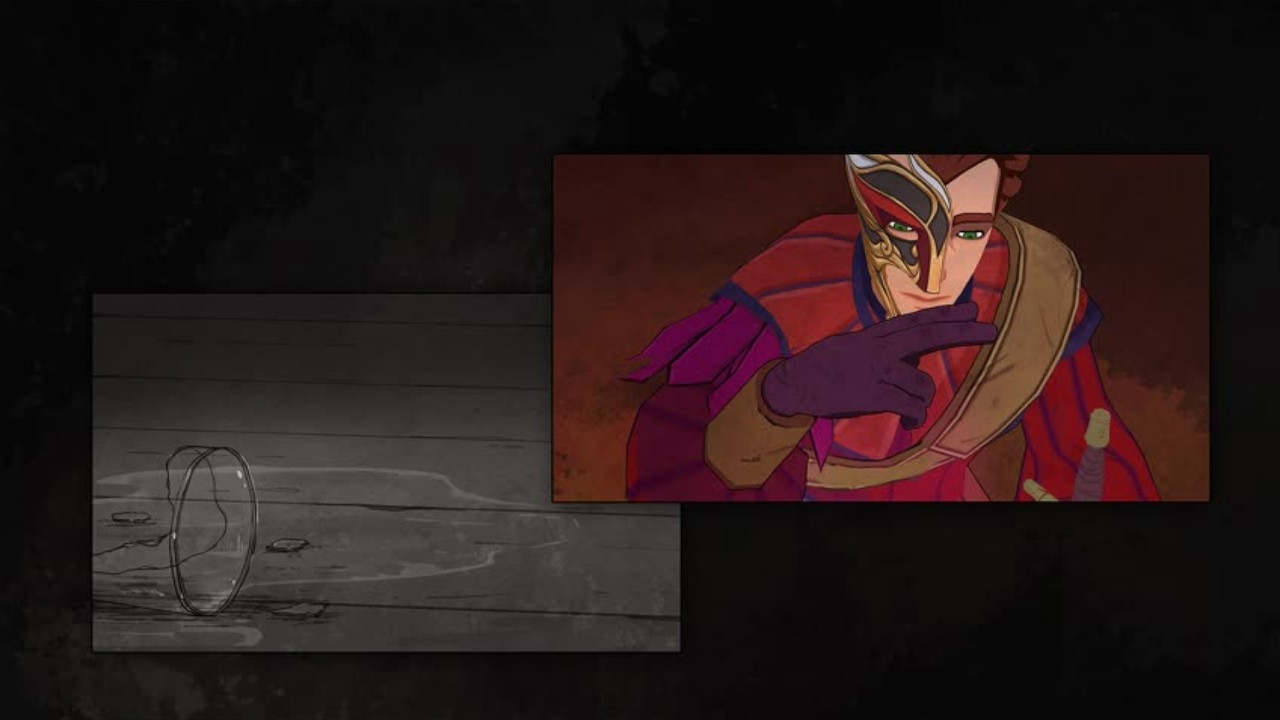 If it isn’t obvious by now, Masquerada is hog heaven for those that enjoy a good old fashioned detective tale with a healthy dose of political uproar thrown in for good measure. Not only are conversations between Cicero and various other characters detailed and extensive, you also have the option to dig even deeper into the lore through a plethora of codex entries.

While many of these text pieces are optional, some of the earliest ones are all but required in order to fully grasp the lingo in which the characters use regularly. Masquerada is dense with dialogue, but not in an exposition-heavy way. As a result, while you might have to put a little bit of footwork in the form of journal reading at the beginning, conversations feel natural and almost as if you are right there in the Venetian-inspired landscape yourself.

Wonderfully animated portraits frequently drive conversations, which often take place every few minutes of gameplay. Less frequent, but awesome comic-esque sequences are sprinkled in between those, and both formats are highly effective at immersing you into the game world. Masquerada cuts no corners in the voice acting department either – the entire multitude of exchanges are completely backed up by excellent voice acting. And if that isn’t enough for you, don’t forget the previously mentioned lore entries, which are all well-written and interesting in their own right. Altogether, the story and characters unfold in a very satisfying manner, evoking a movie-like sensation that’s not all that common in smaller indie affairs. 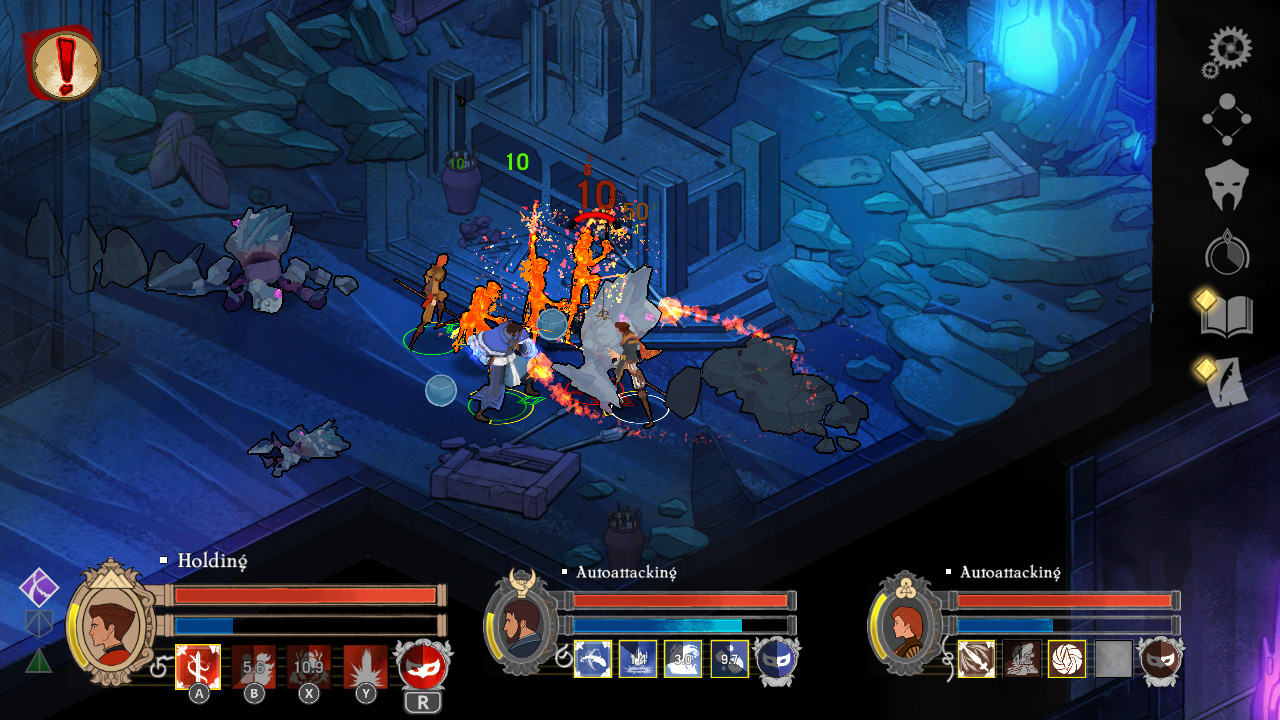 As much legitimate joy that the narrative and world design instills, it constantly battles against itself when it comes to the gameplay mechanics. Billing itself as a pause-for-tactics RPG – akin to that of Dragon Age and older CRPGs – the expectations are there for stimulating combat, and perhaps some form of meaningful character progression through talent choices and/or equipment. Sadly, Masquerada does the bare minimum in either form, and ignores gear progression and inventory altogether. Characters do not level up, rather they gain a handful of skill points after progressing through a certain amount of story-driven fights. These points can be used in a skill tree to unlock new abilities or improve existing ones. While interesting enough, the poor execution of combat makes the entire skill system feel meaningless at best.

Let me explain. Upon confronting enemies, you are thrown into a real-time battle. At any time, you can pause combat and issue commands for yourself and your comrades. This is especially useful for lining up area-of-effect abilities or when interrupting certain enemy attacks, but isn’t really necessary in most scenarios. Many enemy abilities are telegraphed, and are easily avoidable through fancy footwork or well-timed interrupts. However, it can get a bit tedious when you bring your companions into the conversation because they are not intelligent whatsoever, often running face first into telegraphs with no regrets. You can always switch to them and move them out of harm’s way, but they very well could just go right back to where they were before. A very basic AI “gambit-like” system is available to you, allowing you to tune AI-controlled characters to an extent, but it is not near as useful as it is in other games with similar systems. 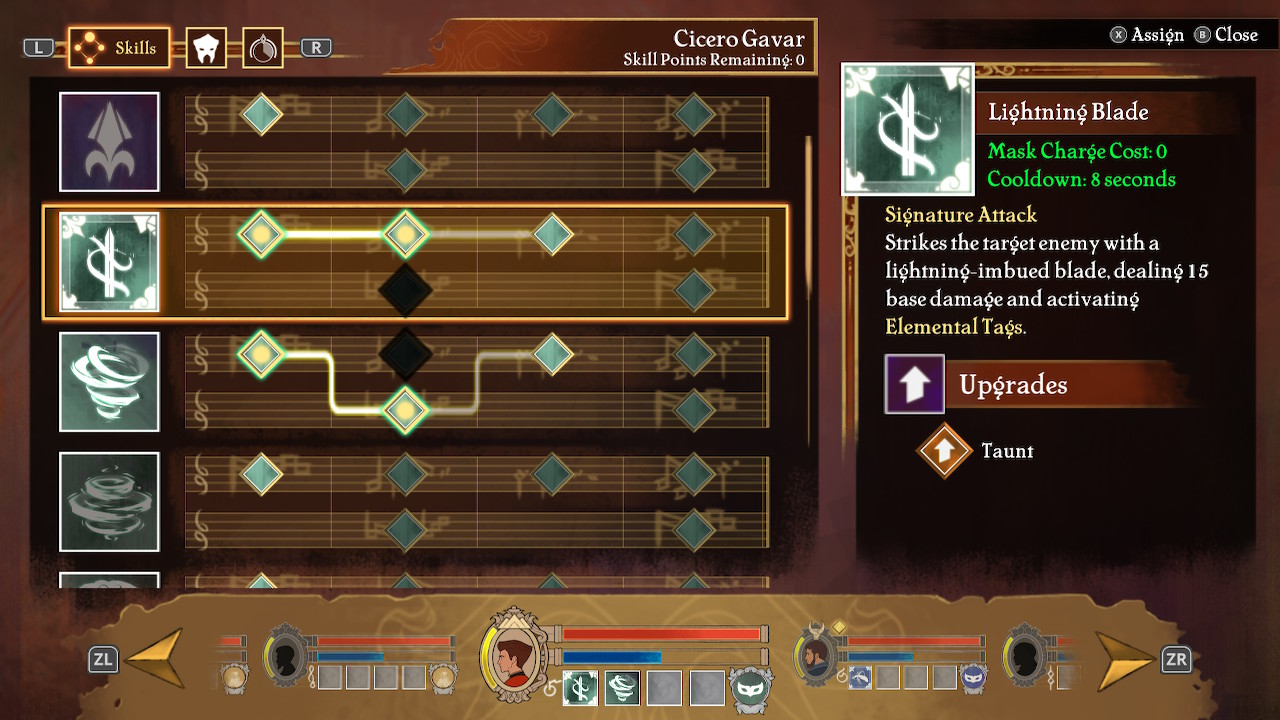 Most importantly to note is the lack of impact that your actions and abilities have in execution. What seems like an interesting combat system conceptually boils down to pressing a few buttons when they light up, and auto-attacking the rest of the time while hoping that your companions don’t die due to their own stupidity. To be fair, I played on the default “normal” difficulty so it is possible that a harder setting might be a bit more stimulating, but even then the lack of engaging character progression through leveling up – or even a basic equipment system – makes for combat that feels like a pointless endeavor rather than something genuinely exciting.

Masquerada has little to offer beyond its engrossing story and shallow combat, unfortunately. There is little in the way of environmental interaction, with the various locations generally only serving as a path from point A to point B. You can fill up your codex entry to the brim if you do a little exploring – while also being sure to overhear conversations here and there – but neither are very engaging from a gameplay perspective. This is quite unfortunate, considering the city of Ombre and its surrounding areas are beautifully designed, but feel quite empty simply because you can’t interact with it. 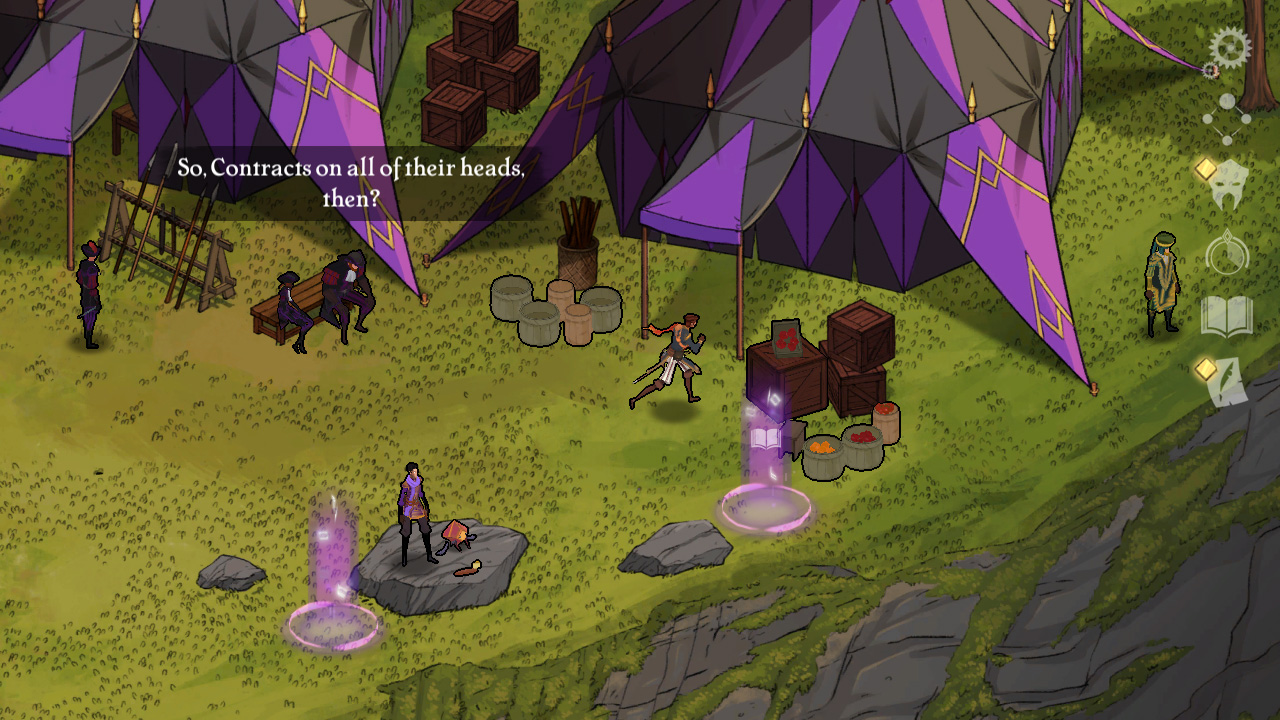 My relationship with Masquerada is one of both love and hate. On one hand, the storytelling and visual design is top notch, and something truly worth experiencing for yourself. The focus on masquerades and pushing it to a legitimate political centerpiece, as well as infusing it with otherworldly magical properties, is both refreshing and interesting take on the “detective’s tale”. That is why it is all too unfortunate that Masquerada’s potential is marred by poor, repetitive combat and meaningless character progression – which would not be an issue at all if it weren’t billed as an RPG in the first place. You can easily be wowed by its world and lore, just don’t expect too much else beyond that.