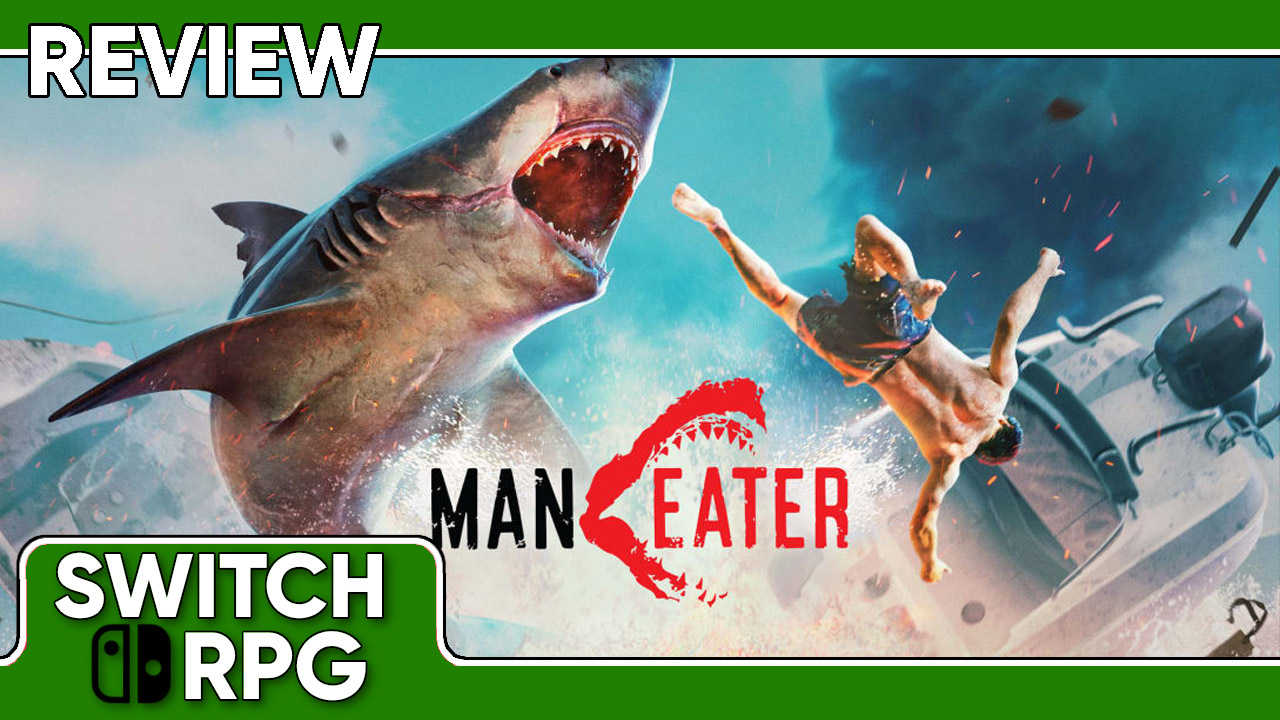 When it comes to open world RPGs, the Switch doesn’t get very many the same day as other platforms. Regardless, the Switch has accumulated a great number of them over the years – Witcher 3, Skyrim, Saints Row, and Outer Worlds, to name a few – but I was particularly glad to see Maneater make its way to the console’s shores. Although it was released last year on other platforms, it was reviewed favorably and it’s unique setting and perspective intrigued me. I mean really, who doesn’t want to play as a Shark in a giant open water sandbox? Time to jump in and see whether this “ShaRkPG,” as Tripwire puts it, sinks or swims on Switch! 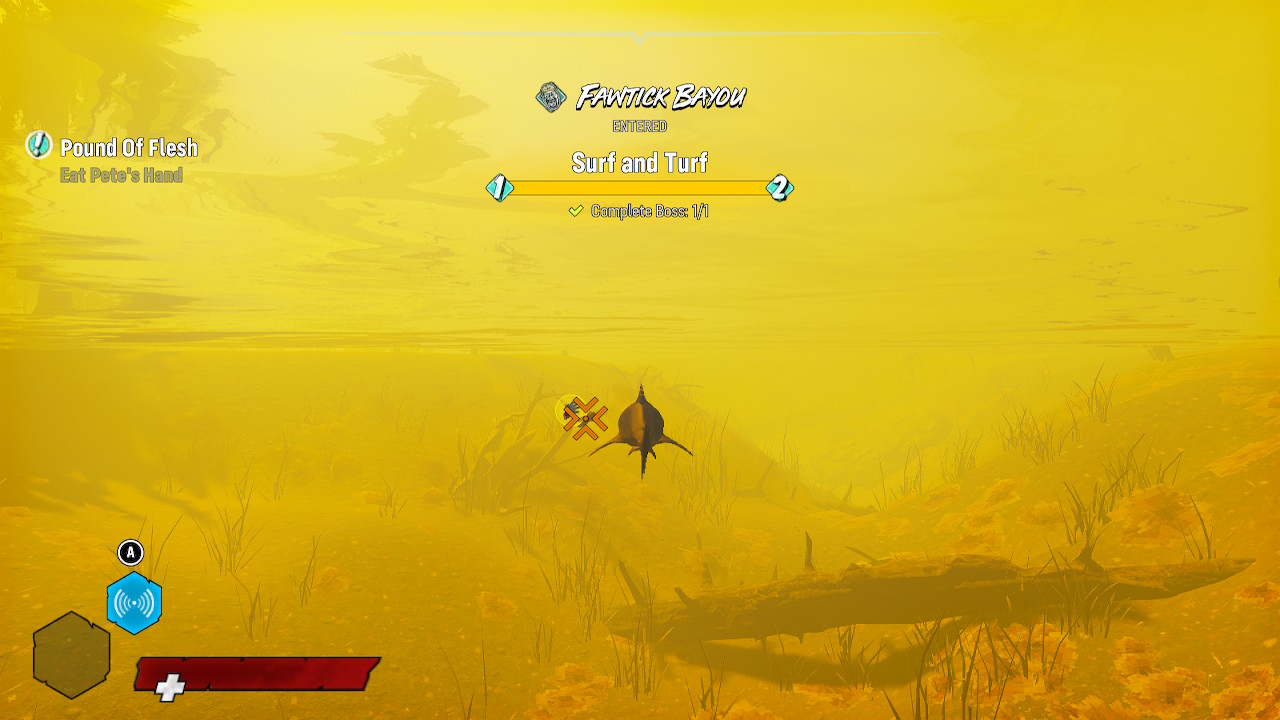 In the beginning, Maneater gives you control of a powerful, fully upgraded adult female shark that just so happens to be going on a killing spree at a local beach. Coincidentally, there is a reality TV show crew filming at the same beach! The show follows the world-renowned shark hunter, Scaly Pete, and his son, Kyle, as they hunt sharks. Scaly Pete in particular hunts bull sharks, and as you – the shark – wreak havoc on the beach, he manages to capture you. Upon capture, Pete discovers that the shark is pregnant, and proceeds to cut out the baby shark with his knife. This results in the baby shark taking Pete’s arm slap off before ultimately making a break for the ocean. Furious, Pete threatens the shark with his knife, setting up an inevitable showdown at a later date. 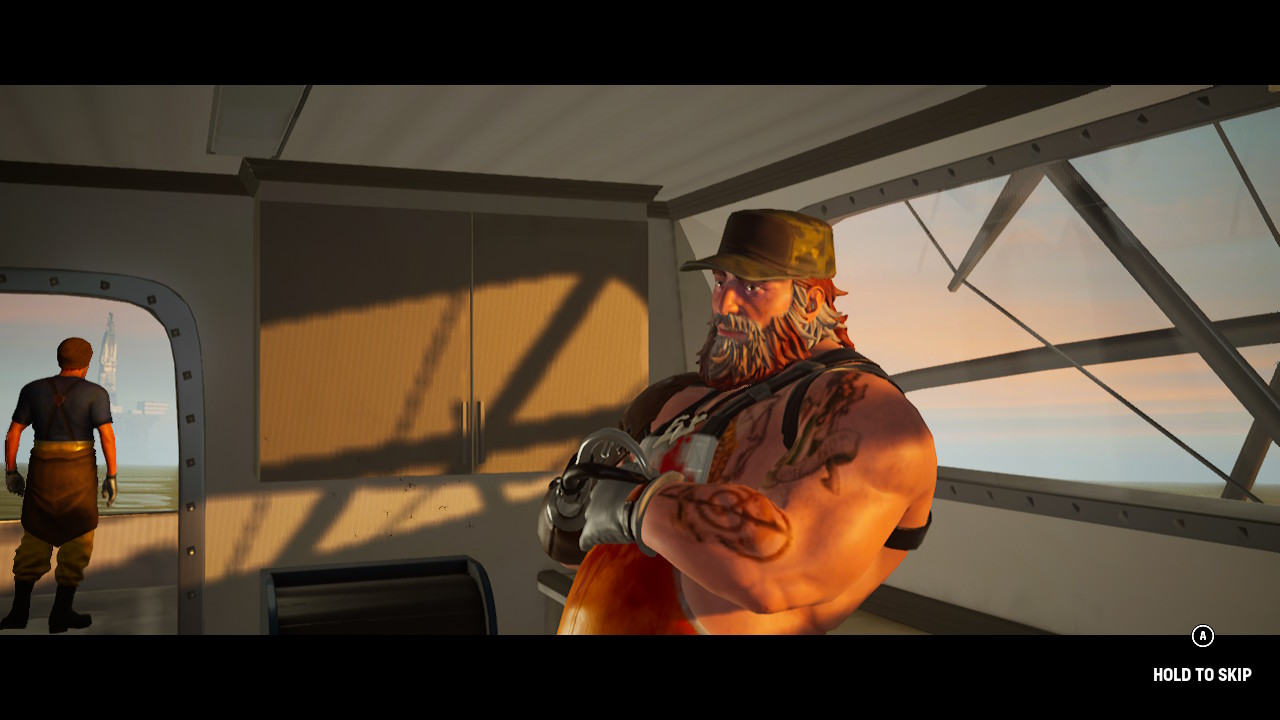 Our story then shifts to where you control the infant shark, who is small and weak. At this point, narratively, things become very predictable. Over time, the shark grows and will have future run-ins with Pete, his crew, and their ever-growing frustration over the shark. As you grow into an adult shark, Pete also upgrades his ship, restoring it and arming it to the teeth. Overall, the story isn’t very deep but it’s certainly good enough to keep you invested through some world building as you develop as a shark. 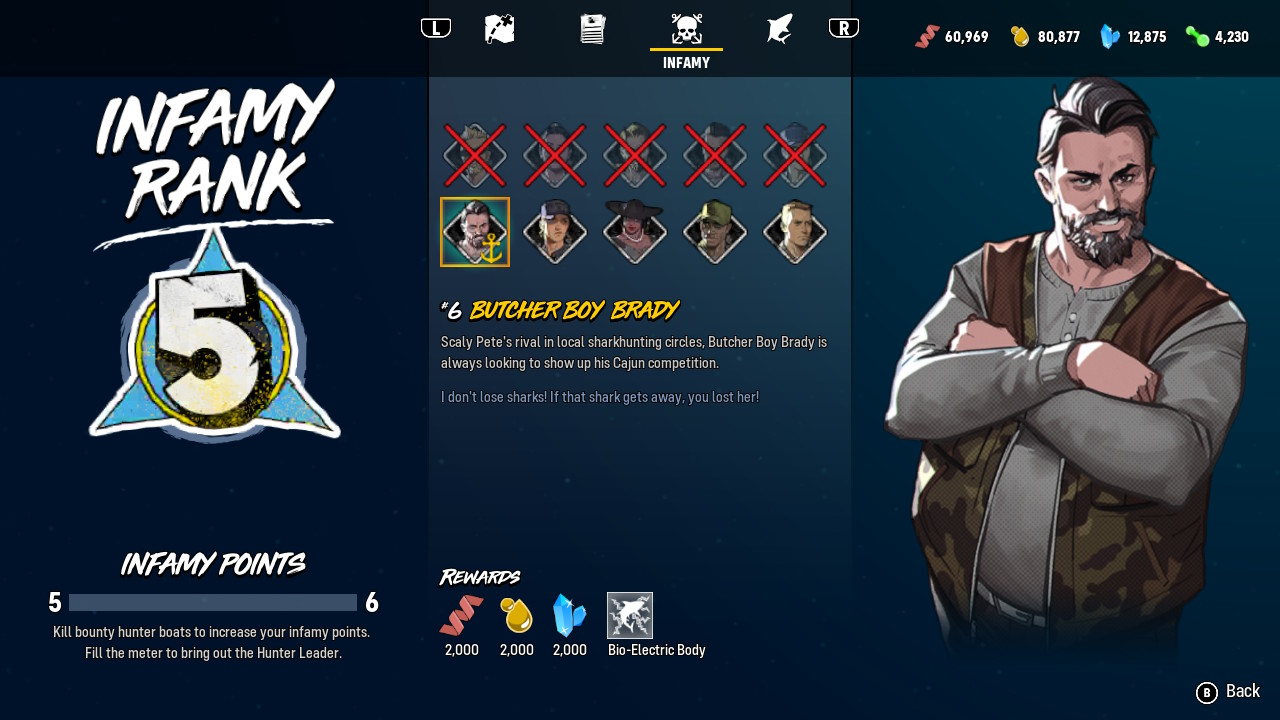 Upon taking control of the baby shark, Maneater becomes an open world game where you are free to explore the ocean as you see fit. However, some areas of the map are gated off because your shark hasn’t grown enough, or doesn’t have an ability or strength to do something just yet. For example, some breakable grates are locked off until your shark reaches a certain stage of life. Another example are the collectable license plates scattered all over the world. Some are on land, others may be floating high above the water, and neither example may be accessible until later parts of the game (ie. backtracking). 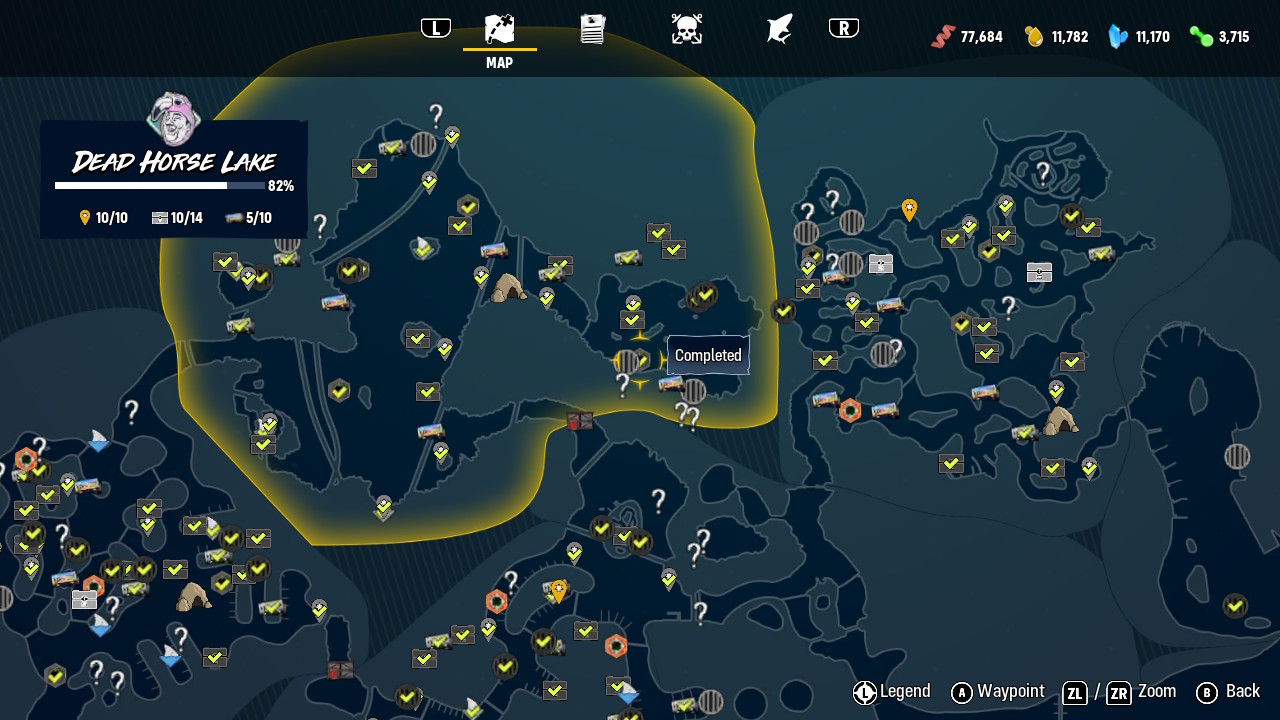 Maneater’s map is structured in a very Ubisoft/GTA-like fashion, broken down into various areas beginning with Crawfish Bay. Each area has a grotto which you can fast travel to when not in combat (ie. towers in certain Ubisoft games). Furthermore, entering each area’s grotto will provide some brief narration of the area and outline some of its major objectives. Other items, such as various collectables, will be added to the map upon discovery. These types of things can either be discovered by exploring the ocean and coming in close proximity to them, or by using the sonar ability. Collectibles and objectives will appear on your map with various details, and will convert to a check mark after completing them, making it easy to see where to go, what you’re missing, and maybe what you should do next.

Of course, there is also plenty of combat in Maneater. Wreaking havoc in general is a key component of the game. Naturally, a shark needs to hunt and eat, grow, and survive. Doing just that will net you both experience and nutrients, which allows you to level up and unlock new abilities. Combat consists of charging into enemies, hitting them with your tail to stun them and then using your powerful jaw to consume. You can also use your surroundings to help in combat as other sharks and sea life will sometimes join in the battle by either attacking or aiding you. 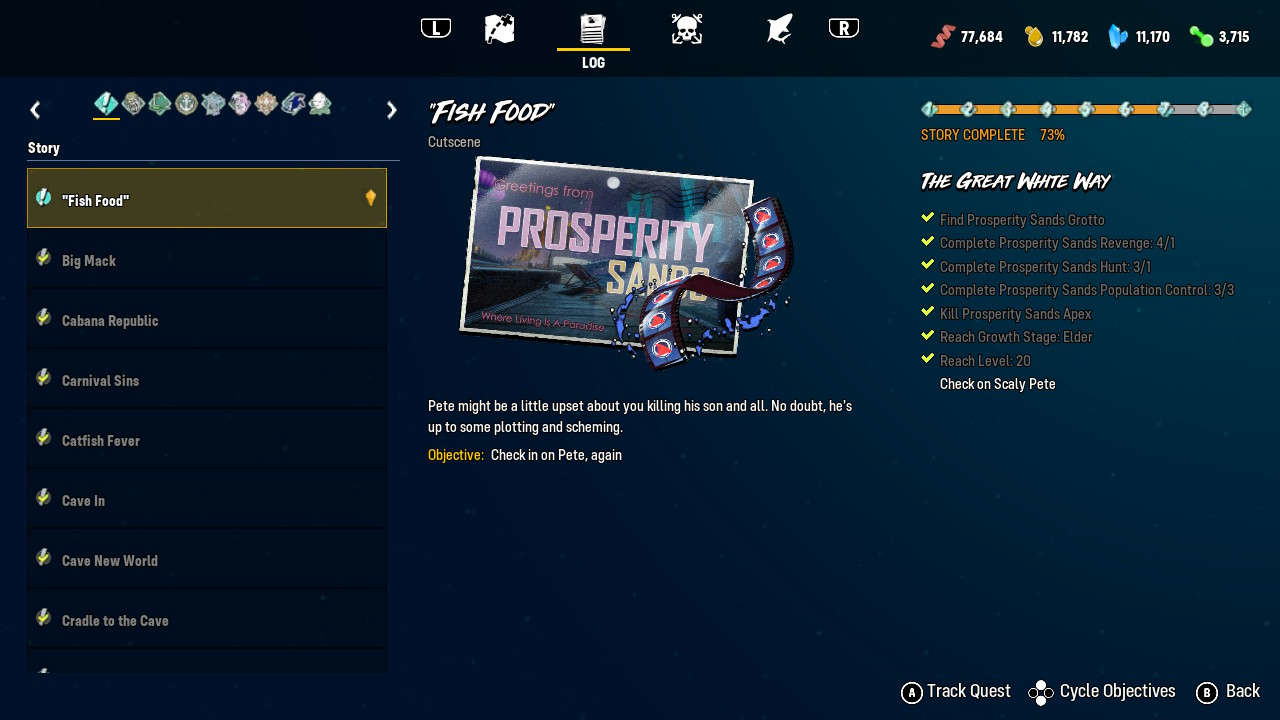 Leveling up the shark not only makes them stronger, but also makes them mature in age. Part of this process involves slowly unlocking upgrade abilities, specifically to the jaw, head, body, fins, tail, and up to three organ slots. One of these organ abilities is the sonar ability I have referred to already, but there are others to choose from such as the ability to survive longer out of the water without suffocating. Some of the jaw and body upgrades allow you to select from different sets, like the bone or shadow set, which give your shark extra layers of armor and improved jaw strength. You will find that there are various customization options, and some are better utilized for the objective at hand. 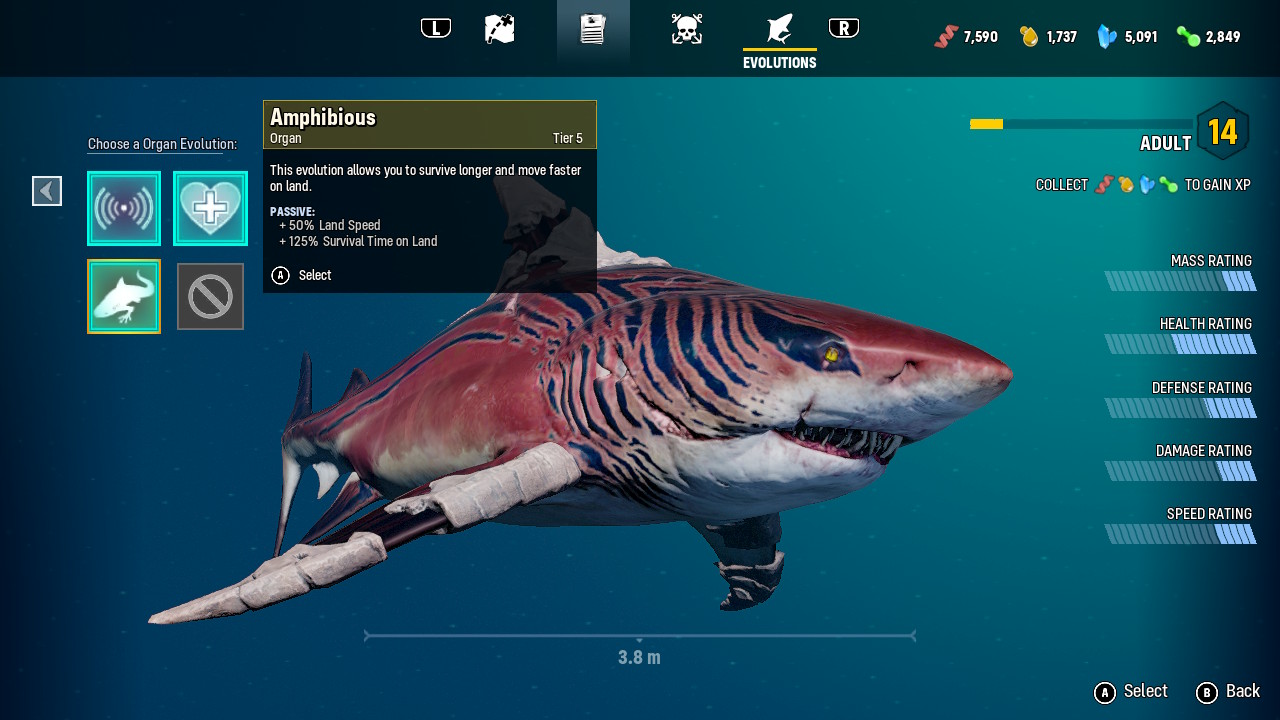 A shark’s carnage doesn’t go unnoticed, as causing any sort of mayhem will increase your threat level in a fashion similar to the cop system in GTA. At a certain threshold, the hunters and coast guard start to come after you to hunt you down. Eventually, this will force out some bounty hunters and killing them will increase your infamy rank. While taking out all 10 bounty hunters isn’t required to complete the story, you are required to slay some of them. These missions are a blast, and for me was just total comfort food. Creating tons of havoc and getting to pop up out of the water and snatch a hunter off their boat was just extremely satisfying. Overall, the gameplay loop works extremely well and prevents the repetitive aspects of the game from becoming mundane. Maneater also doesn’t overstay its welcome, as it can easily be completed in only a few gaming sessions. 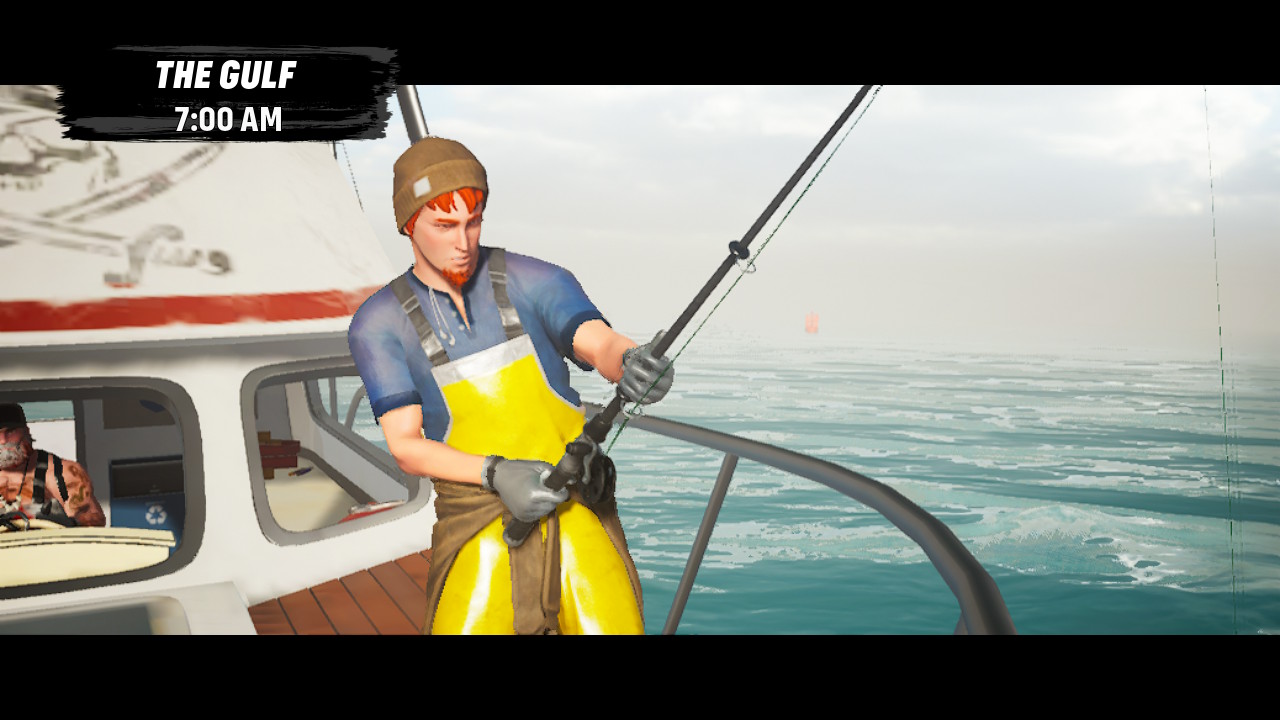 One of the most important aspects to consider in any open world game is performance, especially for those that make their way to Switch. Truth be told, I appreciate the effort that went into making this port, as I enjoy gaming on the Switch right now the most. Being able to play these games outside and enjoying the warm weather is awesome and has become my preferred way to play. That said, I did run into several performance issues that were definitely frustrating, but never game breaking. First, there is a stark contrast between the early areas of the map, and those that come a bit later. As you are able to explore deeper and deeper into the ocean, pop-in becomes an issue on top of everything becoming blurry and, well, blue. This is likely due to the Switch port being a much lower resolution than other console versions, leading to everything sort of blending in together at certain points in time.

Another issue I experienced was when battling other sea life underwater. When facing off with hunted targets or story-related battles, I would sometimes be battling them and then they would suddenly just freeze in place, staying there or sinking to the ocean floor where I could take them out with little fuss. I am not sure what causes this, but it happened several times and rebooting the Switch and restarting the game didn’t seem to help it. Gripes aside, Maneater is a solid experience (considering the capabilities of the Switch) the majority of the time. 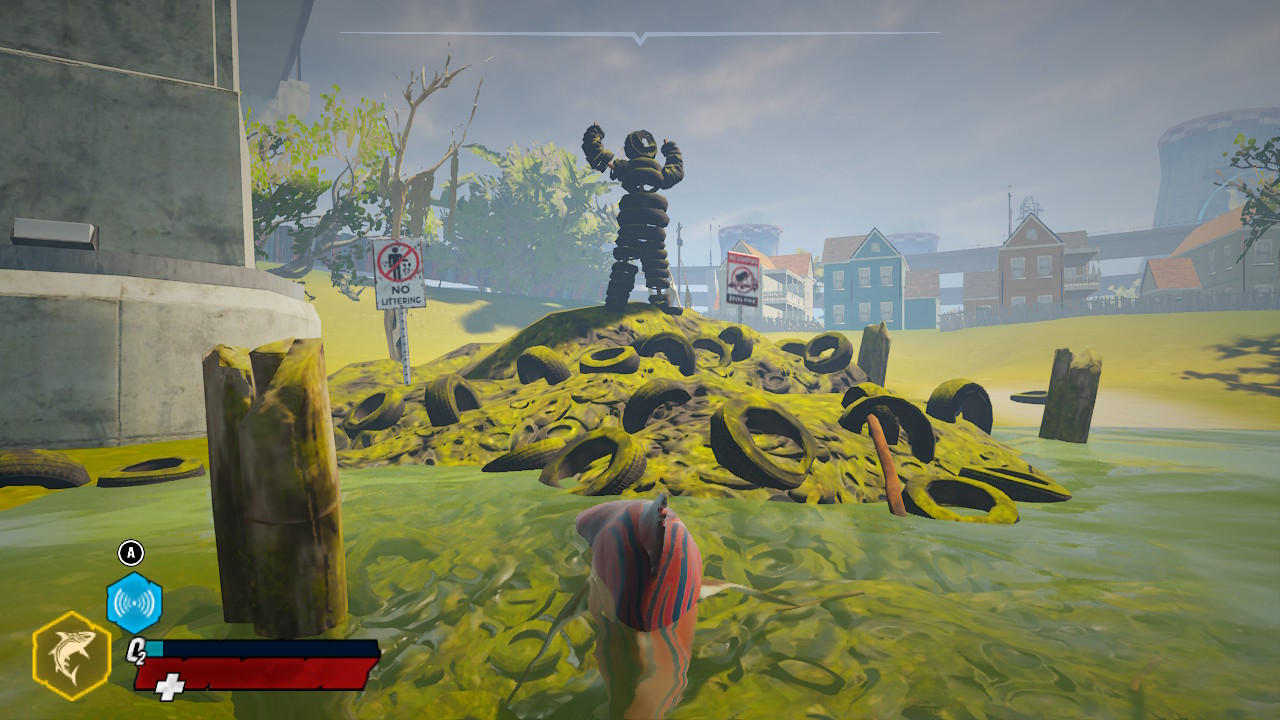 Despite most ports of open world adventures having to cut corners on Switch – Maneater included – the allure of its “ShaRkPG” loop remains undeniable. While I managed to complete the story and some side content in 12-15 hours time, I only completed 80% of what the game has to offer. Maneater’s blend of unique ShaRkPG elements with the addictive properties found in other open world experiences (GTA and some Ubisoft games) collectively makes for an adventure you’ll have a hard time putting down. Those interested primarily in the story may be let down since that isn’t the main focus, but what is here is serviceable enough.

Maneater is set to get DLC later this year, and hopefully the Switch version gets that content in addition to some performance fixes outlined above. While it undoubtedly performs and looks better on other platforms, having this on the go has been amazing despite its shortcomings. Regardless of where you decide to play Maneater, it’s something you should definitely bite into.