Lost Castle is the next entrant amidst an ever-increasing pile of roguelikes on the Nintendo Switch. The new-to-Switch title boasts 150+ weapons, 80+ items, randomly generated everything, and four-player co-op. Sadly, it almost feels like I’ve heard all of this before. Lost Castle is not the first, nor will it be the last game with such features. I’ve put many hours into other very similar titles such as Son of a Witch and Skelly Selest, so I’m no stranger when it comes to roguelikes. Lost Castle may have launched at a bad time and it may feel a bit too familiar when you look at the slew of similar titles the Nintendo Switch has to offer. Though we all feel a bit lost within the swell of recent RPG releases, this doesn’t mean that Lost Castle is totally awol. I hope you have found the map and compass already, we’re going to need it to find our way around this Lost Castle review.

A Journey Starts with Each New Run 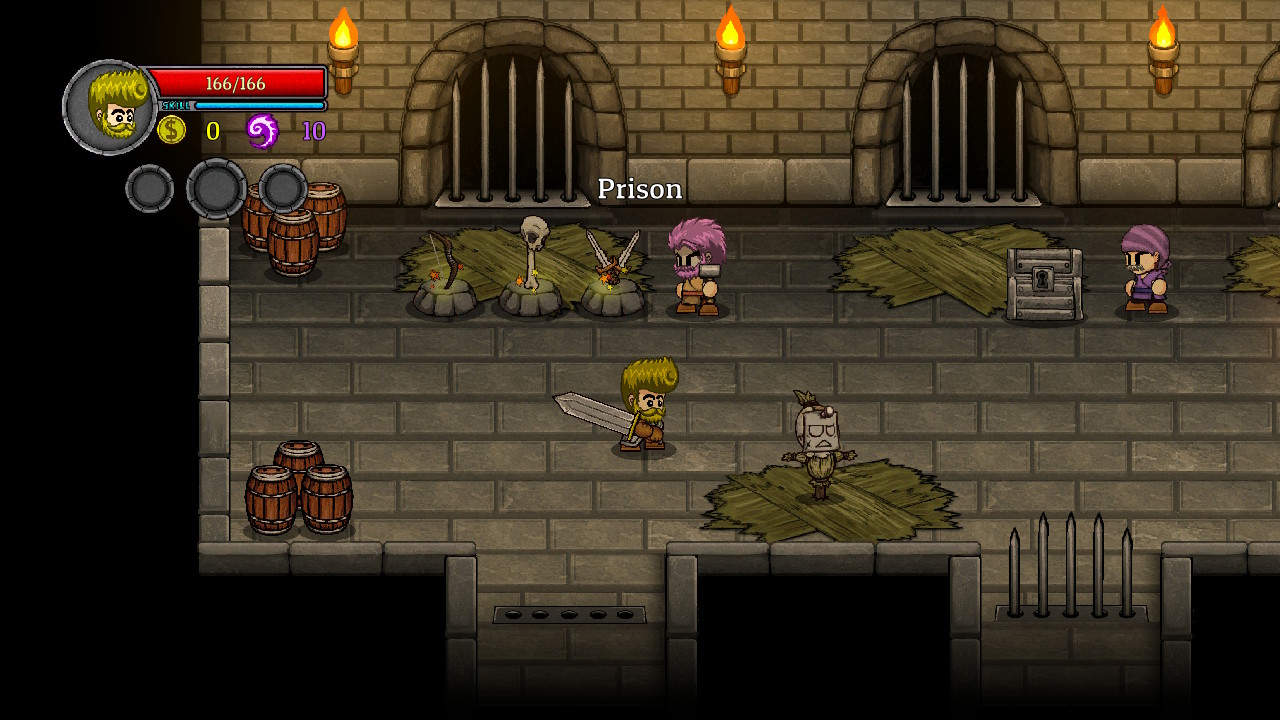 A gate to Hell has been opened by the castle Earl thanks to an errant spell. Demons now call the castle home, while adventurers and treasure seekers from all around flock to the location with high hopes and dreams, many of which will never be realized (given the genre). Since we’ll be starting from scratch on each run it’s important to mention how Lost Castle kicks things off. The start of each run places you into an unlocked cell with a random starting weapon, looks, and gender. There’s no choosing which class or character you want to play, Lost Castle decides all of this for you and quickly throws you into the fray.

After leaving this oft-visited prison cell, you are greeted by a blacksmith, thief, and a pharmacist. Each of these offers their own respective items. The blacksmith will provide you with an assortment of weapons while the pharmacist offers a random potion. After a few unlocks these wannabe merchants will start to offer more variety in items. For instance, one of the unlocks will increase the number of starting weapon choices the blacksmith will give you. This all plays very well into the roguelike nature, as everything is random and nothing is promised. The rest of the game progresses as you would imagine: the player attempts to make it as far as they can without dying. If you die, it’s back to your favorite prison cell as a new character. I hope you’re wearing your lucky underwear, because it doesn’t get any less random, fun, or expected, from here on out. 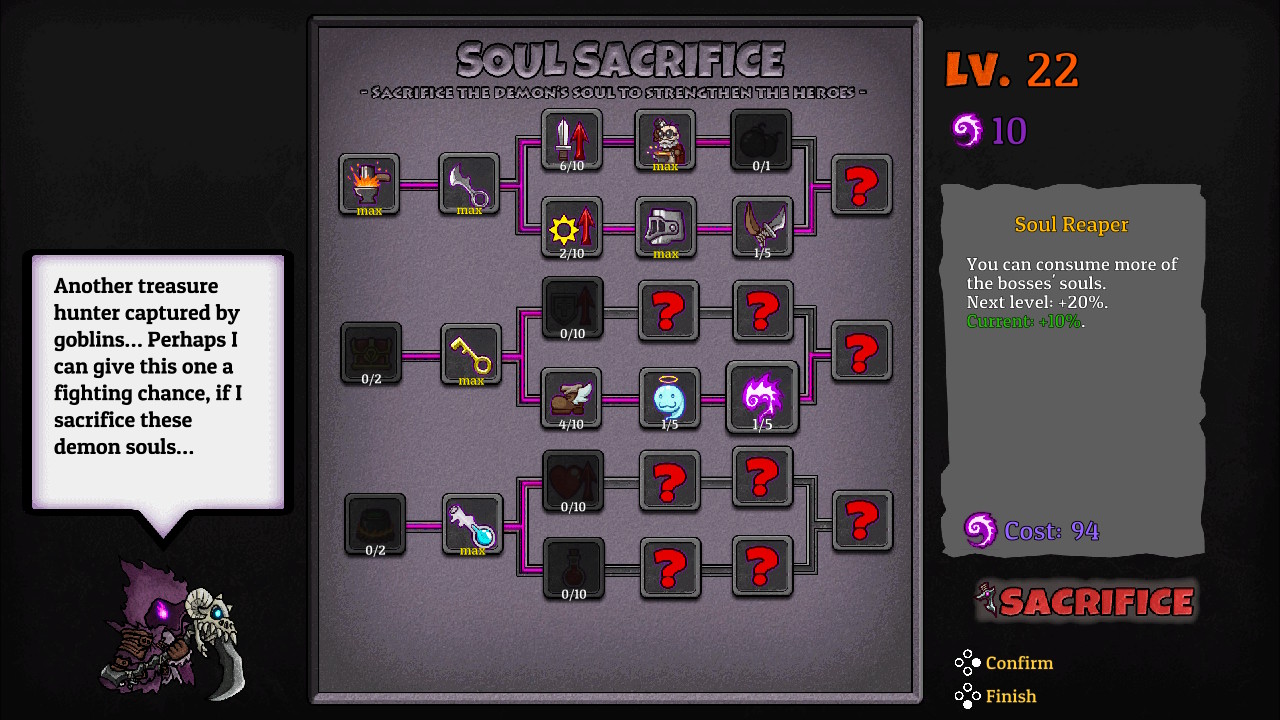 Progression in Lost Castle comes in the form of an upgrade tree, where you are able to unlock upgrades by sacrificing Demon souls in-between runs. It should come as no surprise that Demon souls can be obtained from killing enemies while playing. The upgrades are masked with question marks until you unlock each preceding one. I really like this aspect of Lost Castle, as it gives the game a little bit of mystery and makes the progression feel more purposeful.

Lost Castle plays like a side-scrolling beat ’em up, where you can only attack in the left or right directions, but are free to move in all 360 degrees. Let’s be clear here, I really don’t like normal beat `em ups. Once upon a time, you may have found me at the Double Dragon arcade cabinet, but that love has slowly faded away. I don’t think the basic beat `em up formula works anymore in the same way I feel that Mega Man is forever dead and needs some new ideas. Much to its compliment, Lost Castle doesn’t feel like a mess of punching and kicking like its predecessors. Movement, jumping, and dodging is fluid and smooth while attacking feels precise enough. Lost Castle doesn’t feel like Skelly Selest which, in my opinion, has some of the worst controls and attacking that I’ve ever seen. The levels in Lost Castle are filled with all sorts of random rooms of traps, rewards, trapped merchants, Demon altars, and slot machines. You probably won’t find all of these in a single run, which makes their discovery all the more special. Each of the levels come with their own unique enemies, but the game is not afraid to sprinkle enemies from a different zone in the “wrong” one. Lost Castle remains random until it’s last breath. 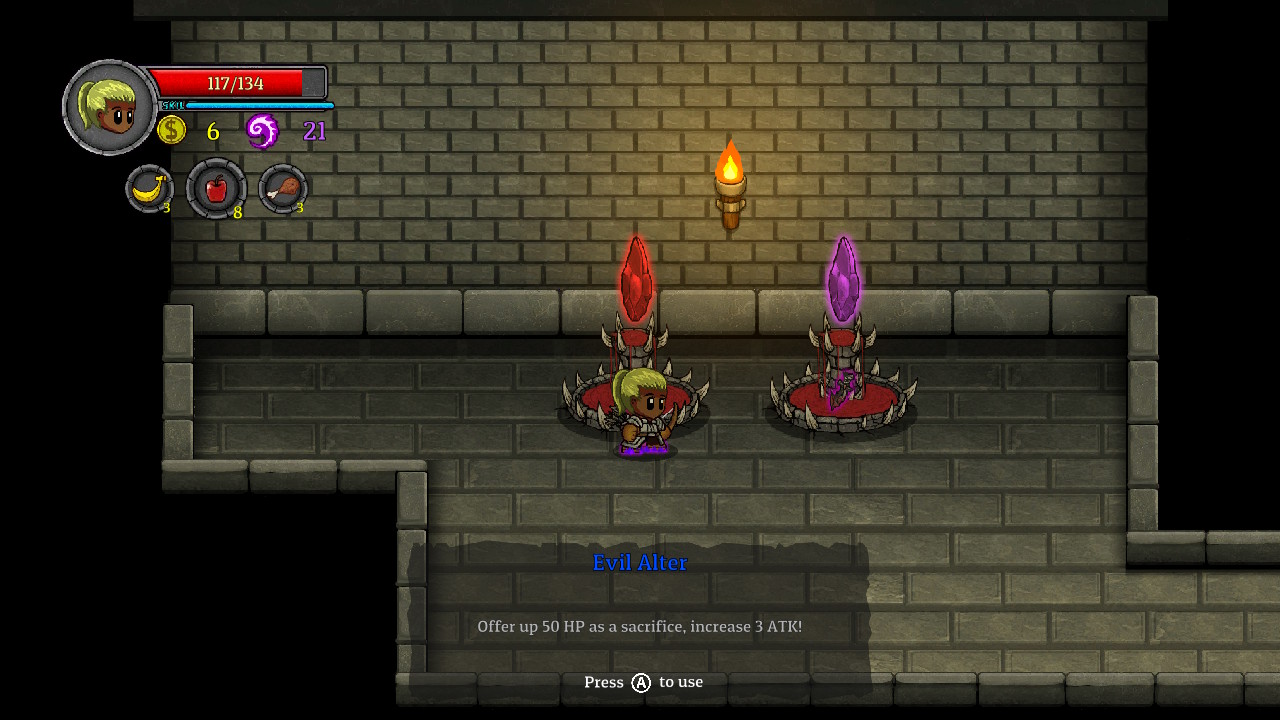 Lost Castle has some very minor, yet fun, nuances to performing attacks. If you chain together 3 attacks you’ll be rewarded with a slightly different, and more powerful, attack than usual. Also, if you gain enough speed to run your next attack will be powerful, which makes for some pretty entertaining Kool-Aid-Man entrances! It’s not all wild swings and arrows though- while attacking, your movement is reduced to a near crawl, making you a prime target for rushing or projectile-based enemies. Attacking versus moving quickly becomes the main decision you’ll have to make if you expect to live. If you’re like me, go turn on “Press-Auto-Combo” within the game settings so your character continues to attack when the button is held. I found this much easier to play with, especially for ranged weapons. Lost Castle is a joy to play, with simple controls that are only made better by the sheer number of items with randomly generated stats.

Variety is the Spice of Life 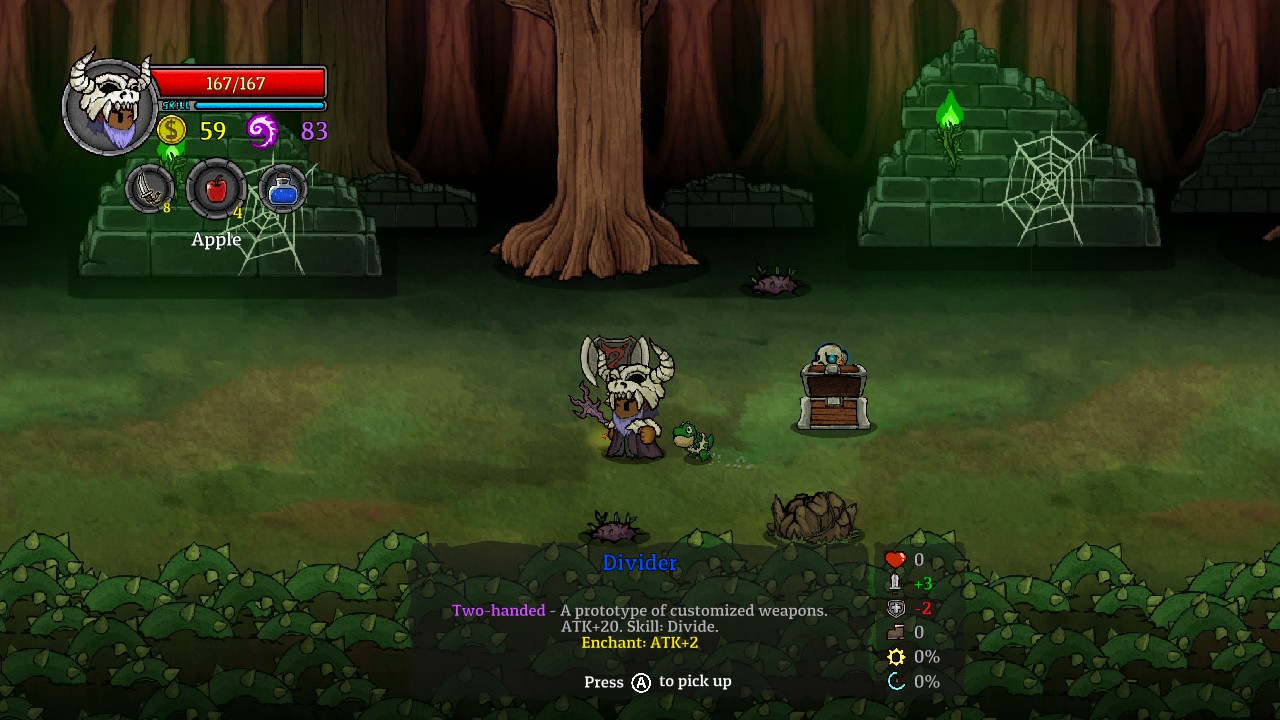 Lost Castle doesn’t lie when it says it comes stocked with 150+ weapons and 80+ items. It really feels like there’s a huge item pool, which makes playing just one more level all that more entertaining. Also, stat boosts in the form of enchantments vary from item drop to item drop. One set of armor found during one run may give drastically different bonuses than it did in a previous run.

Each weapon will also have a special skill attack that requires a gauge to be filled. These vary from weapon to weapon, so make sure to use it before it’s really needed so you know what’s going to happen. But don’t worry, any weapon you drop for another will stay there in case you would like to switch back. It won’t disappear into the abyss, which is really nice when needing to decide between that sword or staff. Other than maybe Dead Cells, Lost Castle is one of the best when it comes to having an expansive item system.

Lost Castle’s items may feel secondary to its weapons and armor suits, but this doesn’t mean they are any less useful. You’ll find a variety of health replenishing items, unknown potions, and thrown weapons to assist you on your dungeon-delving adventure. There’s also a decent amount of passive stat enhancer crystals that permanently increase stats such as attack or defense. I’ll leave it up to you if you want to drink that unknown potion. Some of them are permanently damaging to your stats.

Lost Castle also has a compendium for all you achievement hunter fans. It catalogs every piece of equipment, item, monster, and boss that you have ever seen or acquired. It will even track the total number of kills per monster if you’re that type of a number geek. 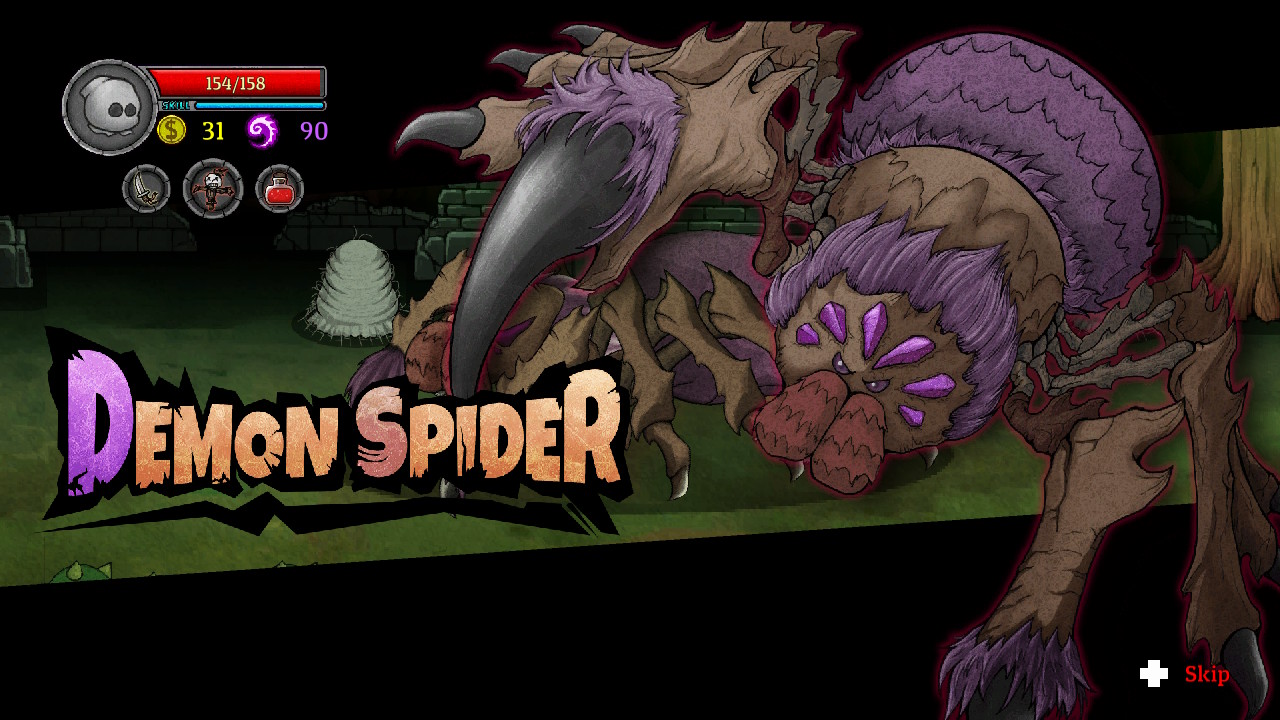 Lost Castle looks good enough. I really enjoyed the enemy sprite design, but for the most part, the aesthetics aren’t anything ground breaking. While most may think of this as a bad thing, it’s excellent considering Lost Castle’s track record thus far. Nothing within the graphical department detracts from the main gameplay experience. I really like the boss designs, but it feels like I’ve seen this same thing before and it comes off as feeling fairly standard. Maybe this is just a testament to the quality of Nintendo Switch games I’ve played within the past few years. You’ll find no real complaints from me here, which is a good direction for Lost Castle. This simply means that the game has a very typical feel. 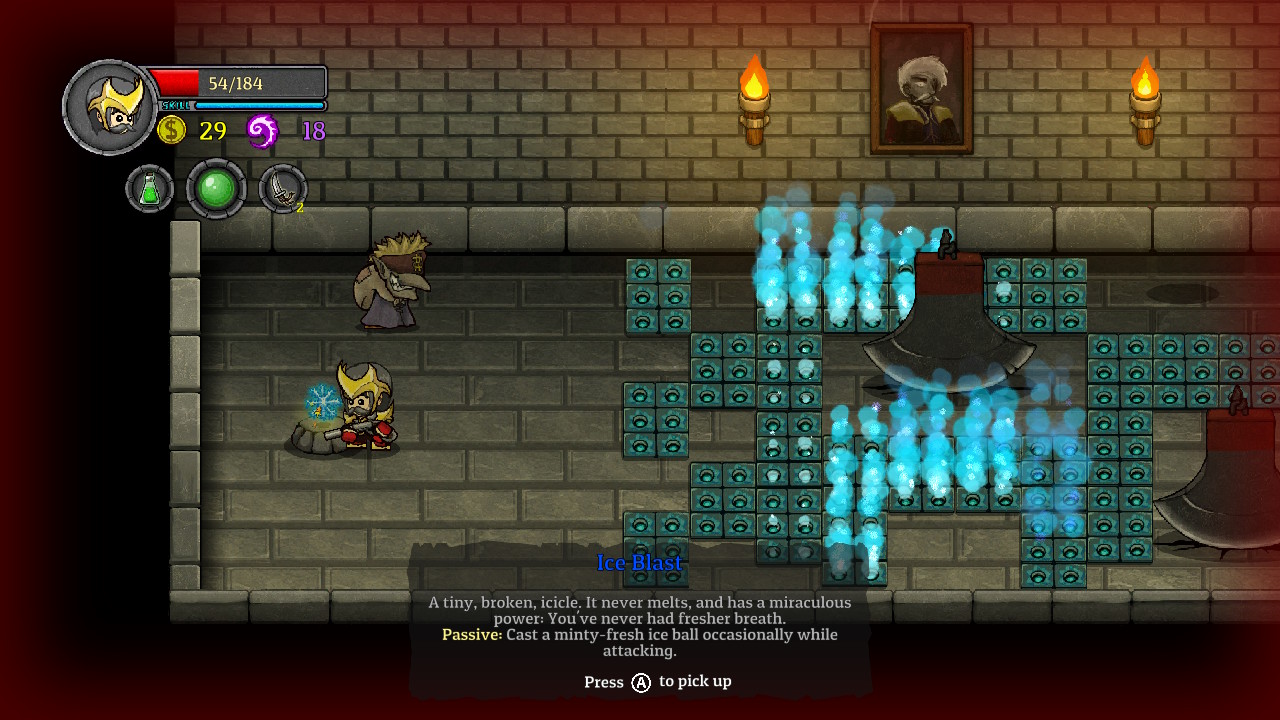 Since Lost Castle is firstly a roguelike, this means it also falls into some of the same traps of the genre. Each run in the game is slow to start. Blasting away at the same goblins and breezing through the first and second levels quickly becomes a chore, not the shiny experience it once was. As players, our knowledge and skill of the game eventually outgrows the starting levels, but due to the game design, we are forced to replay them every, single, time. Maybe one of these days a developer will come along and find an ingenious way to introduce level skips or some other feature that will obsolete this rampant roguelike problem. (Editor’s note- check out Enter the Gungeon for a nice twist on this format!)

Lost Castle online multiplayer has been a barren wasteland each time I’ve checked. Nintendo Switch developers really need to reconsider adding multiplayer on their Switch release as oftentimes, its wasted and unused. I would assume the online features are better off on PC, but it’s nothing but mothballs and cobwebs on the Nintendo Switch. It’s worth noting that the online multiplayer does include both co-op and arena modes, but I was unable to check out either of them. No complaints on the local co-op end of things. It’s just that you need friends or family to play with which might be as frequent as an online filled lobby. 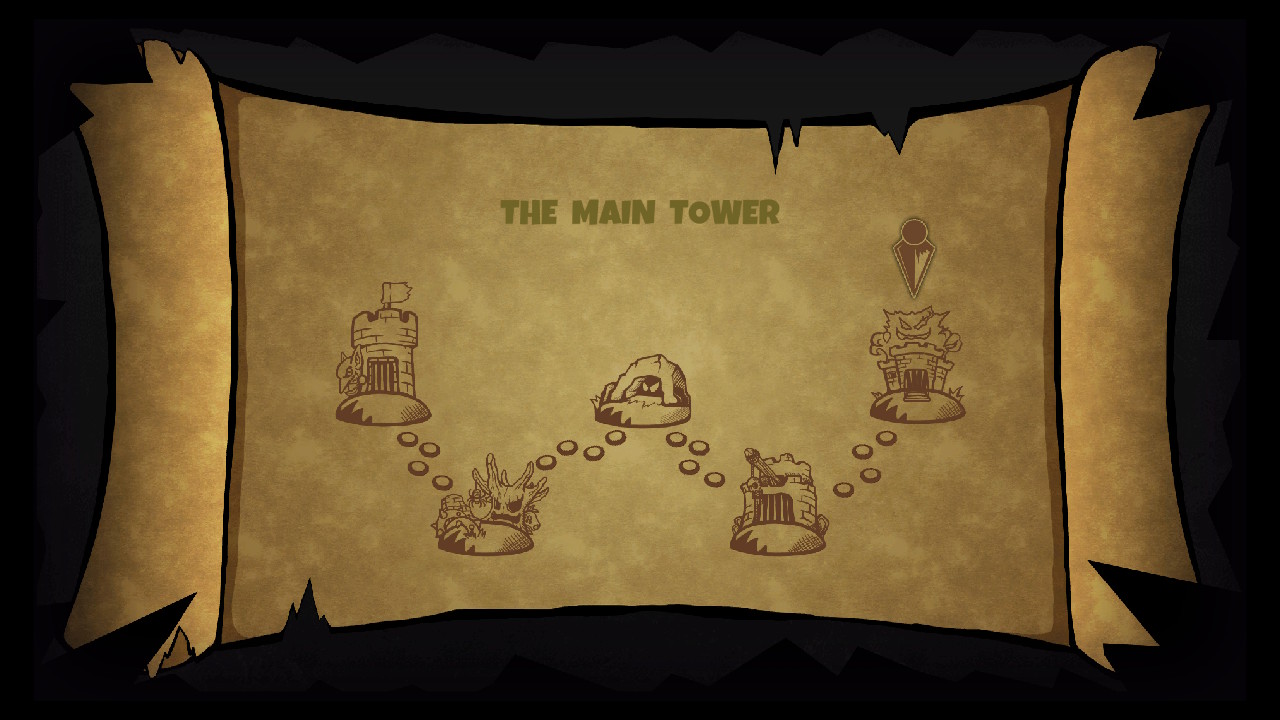 Lost Castle is a pretty easy going and mildly interesting roguelike title for the Nintendo Switch. My only problem is that I can’t help but feel we have all seen much of what the game has to offer. It’s not wildly different than other titles like Son of a Witch, Skelly Selest, Dead Cells, Enter the Gungeon, or Cave Blazers. There’s not a variety of game modes or an overwhelming number of unique elements- what is included is expected, as it should be for a game releasing in 2019. Thankfully, it’s executed well-enough to get those “just one more level” vibes rolling. Overall, it feels just a tad too predictable, but then again, maybe it’s just me and the overwhelming number of roguelikes I’ve played this year.

I can’t confirm how far Lost Castle actually goes, as I only made it to The Lost Tower level, which is the last one on the map. However, this was within the first 10 hours of playing, which makes this one of the easier roguelikes that I have played. Lost Castle is a really solid game with very little to find any issues with. I’m a fan of the genre, so Lost Castle is a bit of a perfect fit for me. If you’ve stayed away from roguelikes until now, I think you’ll be in for a treat with this one, but if you’ve played them all I”m afraid there’s little here that will distance the Lost Castle experience from all the rest.

Loving this game playing with my wife and youngsters (5 & 8.) Biggest gripe is Switch controllers seeming to lose connectivity intermittently. Not sure if it’s our controllers given they’re primarily used by kiddos and friends.