Legend of the Tetrarchs Review (Switch)

Oh yeah, it is time for another KEMCO RPG review! If you frequent SwitchRPG, you’ll know that these games are a guilty pleasure of mine, but not all of them turn out to be worth the time (or money). Regardless, many of us here have seen immense value in the chosen few games that manage to hold their ground amongst other budget-tiered JRPGs. Maybe money is tight, or you just want to hop into a retro-styled RPG that isn’t as lengthy as the classic titles we all know and love? Whatever the case may be, KEMCO can sometimes provide that experience for you. Let’s find out where Legend of the Tetrarchs falls on that scale! 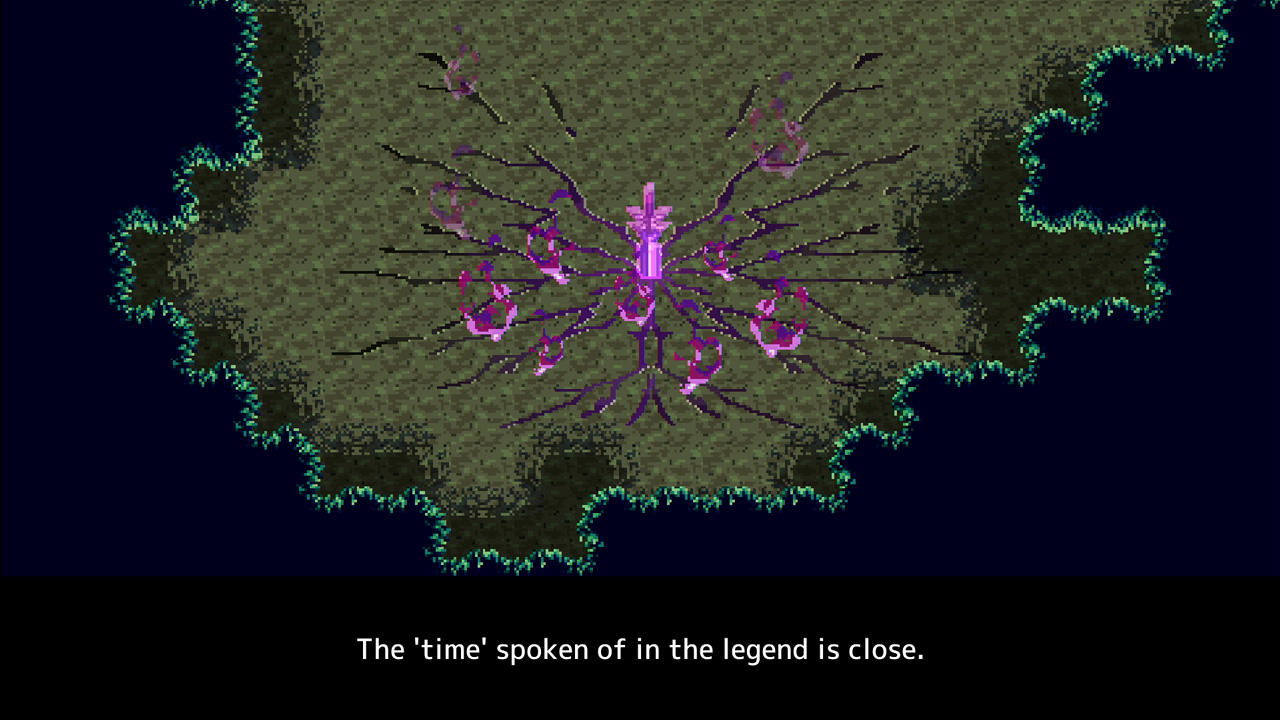 There are three planes of existence: the surface, the firmament, and the underworld. 600 years ago, a war raged between deities thats outcome scarred the world forever. This wound inlaid upon the surface exuded darkness from the underworld, and the only way to stop its its miasma at bay was to drive a holy sword within it. The four heroic Tetrarchs – physical embodiments of deities comprised of Lloyd of the Light, Ishbel of the Darkness, Siegfried of Death, and Eileen of Life – then decided to seal themselves away until the time was necessary to once again walk amongst the living. That time would come too as, truthfully, the holy sword was only a bandaid fix to a much larger problem. Today, the Tetrarch of light, Lloyd, has been awakened in order to seal the wounded world for good…we hope so, anyways.

The problem is that the Tetrarch of darkness, Ishbel, beat him to it, claiming the sword for his own. This act of betrayal leads to the tendrils of darkness spreading further than ever before, and becoming too potent for a being of light (Lloyd) to vanquish on his own. On top of that, Ishbel – holy sword of darkness in hand – now holds truly terrifying power thanks to the absorption of the blade over the past six centuries. Lloyd cannot hope to reverse these actions alone – he must awaken the remaining tetrarchs, while combining his efforts with key “surface folk” (aka humans) in order to attempt to right this horrible wrong. 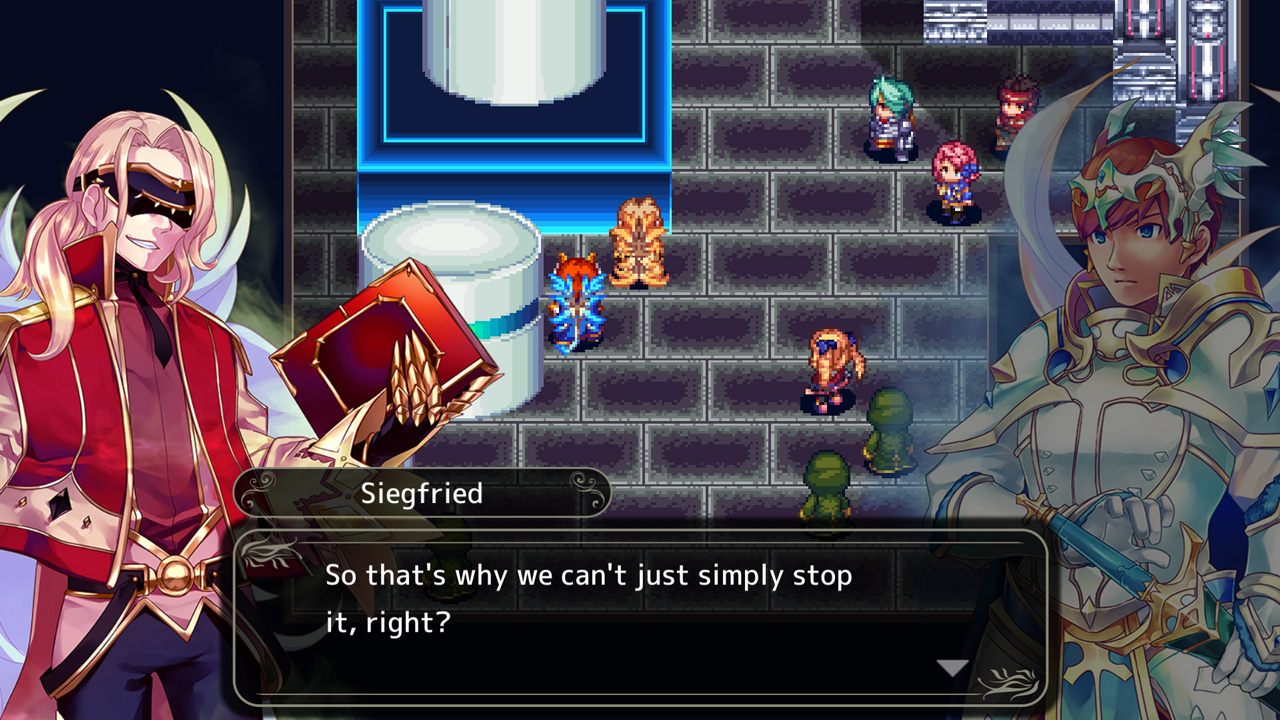 Legend of the Tetrarchs starts out strong – it covers quite a bit of ground within the first hour, but it is pretty entertaining throughout the opening sequences. Soon though, things begin to fall apart as the plot becomes overly convoluted for no reason. Layers of opposition are stacked upon each other, but not in an intelligent or meaningful way. The large cast of heroes suffer a bit from this as well, and I think both sides fall victim to the same thing: pointless exposition. There is a metric ton of dialogue in this game, but virtually all of it is spent explaining the task at hand rather than building up those key players on both sides.

Many times, extended sequences of dialogue can feel as if the characters are just talking in circles, while other times they’ll give too much insight about the situation, or go on about how a certain person feels about certain things. Context is great, and appreciated, but not so much when it is doled out in an almost robotic fashion. Give the player some opportunities to “read the room” and experience these things naturally. I realize some of this could have been lost in translation, but it doesn’t change the fact that the problem still exists. In general though, you should never really be purchasing a KEMCO-published RPG for its storytelling capabilities alone.

Fun factor and gameplay is where most KEMCO RPGs shine, and Legend of Tetrarchs is no exception. Don’t get me wrong though, if you don’t like the traditional retro RPG format – fighting a multitude turn-based battles whilst following a linear progression path – then this might not be the game for you. That said, Legend of the Tetrarchs does go beyond its nostalgia roots by successfully infusing some more modern components into the mix, encouraging both genre newcomers and retro JRPG veterans to, perhaps, give it the time of day. 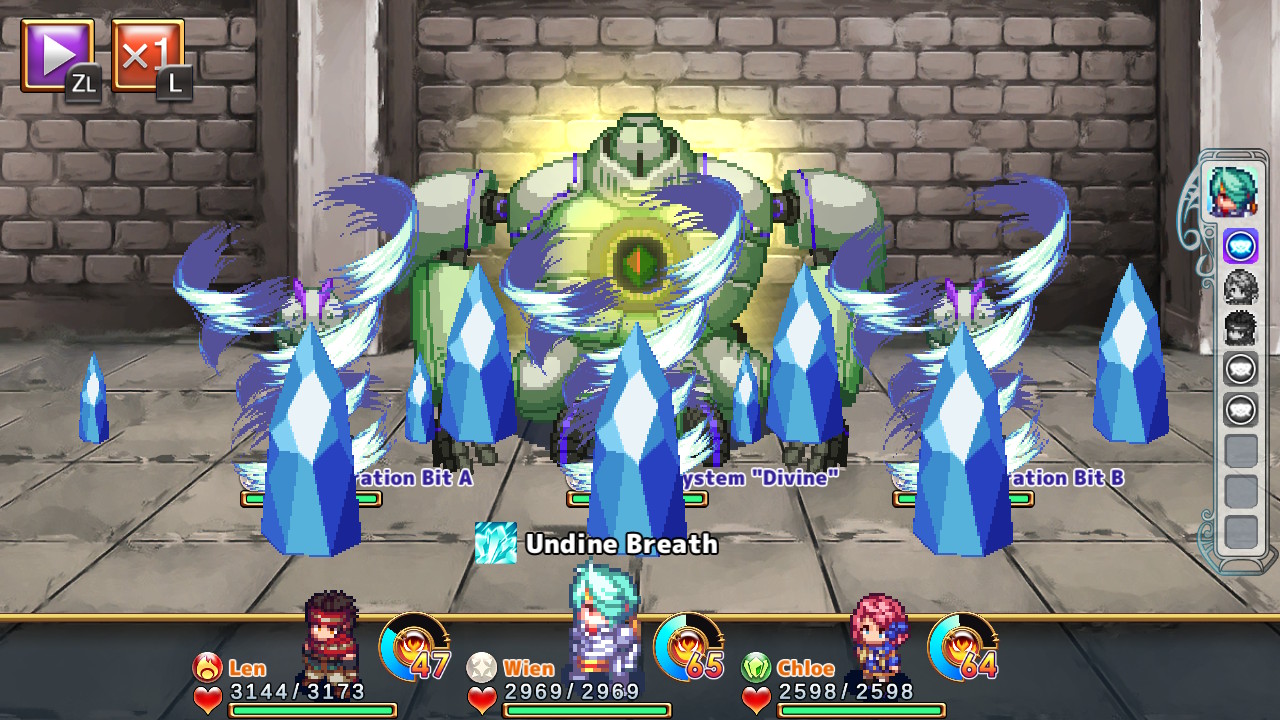 Combat plays out from a first-person perspective, akin to the Final Fantasy Legend Gameboy titles. Player characters, and enemies, perform actions in order based of their agility – fairly standard turn-based fare at play here. The inclusion of auto-battle and speed-up features modernize this age-old approach though, but the former system is a mere shadow of the ones frequently present in KEMCO RPGs. Instead of spamming your melee attack or performing the last actions you chose, this auto-battle system has a mind of its own and doesn’t process situations intelligently. Unless you are severely overpowered for an area (not likely to be the case) or are incredibly lazy, you’ll probably never use the feature as it tends to extend the length of combat rather than shortening/simplifying it.

Legend of Tetrarchs has done away with consumables and bloated skill systems in favor of more streamlined processes. Your active party’s health and statuses are restored after every fight, and their special skills are fueled by SP – a point system that accrues in varying amounts at the end of every turn. Character toolkits look and feel different from one another, and no two party members play exactly the same although most are capable of filling multiple roles when necessary. Skill pools are kept relatively small, but remain viable throughout the entirety of the game as a result.

In addition to skills, each character can equip up to two passives called carmines. While the pickings are slim at first, soon you’ll uncover tons of these, and there will definitely be moments in which you weigh your potential choices to properly tackle the task at hand. It isn’t the most balanced system – some carmines are clearly better than others – but you’ll still find yourself adjusting them based on the path ahead of you. The only real issue I had with the combat was the encounter rate, which is quite high. It isn’t uncommon to get in a fight every few steps, so prepare yourself for that unless you want to purchase a “no encounter” toggle (more on that later).

You can deck out your party in new equipment found from chests, monster drops, and of course shops. Upgrades aren’t so cut and dry though because each piece has a primary, secondary, and tertiary stat/trait to consider. At any weapon shop you might be able to equip two to three different swords, but some may focus on defense and evasion while others might emphasize critical strike and power. Gear can be further upgraded through the strengthening system, which will increase the power of a piece of gear up to five times in exchange for a hefty amount of gold. I do not really like this system because it only complicates the gearing process – new gear almost always has to be upgraded to max level before it is viable to exchange for your current loadout. It might sound nice on paper, but it doesn’t really improve the experience in a really meaningful way. 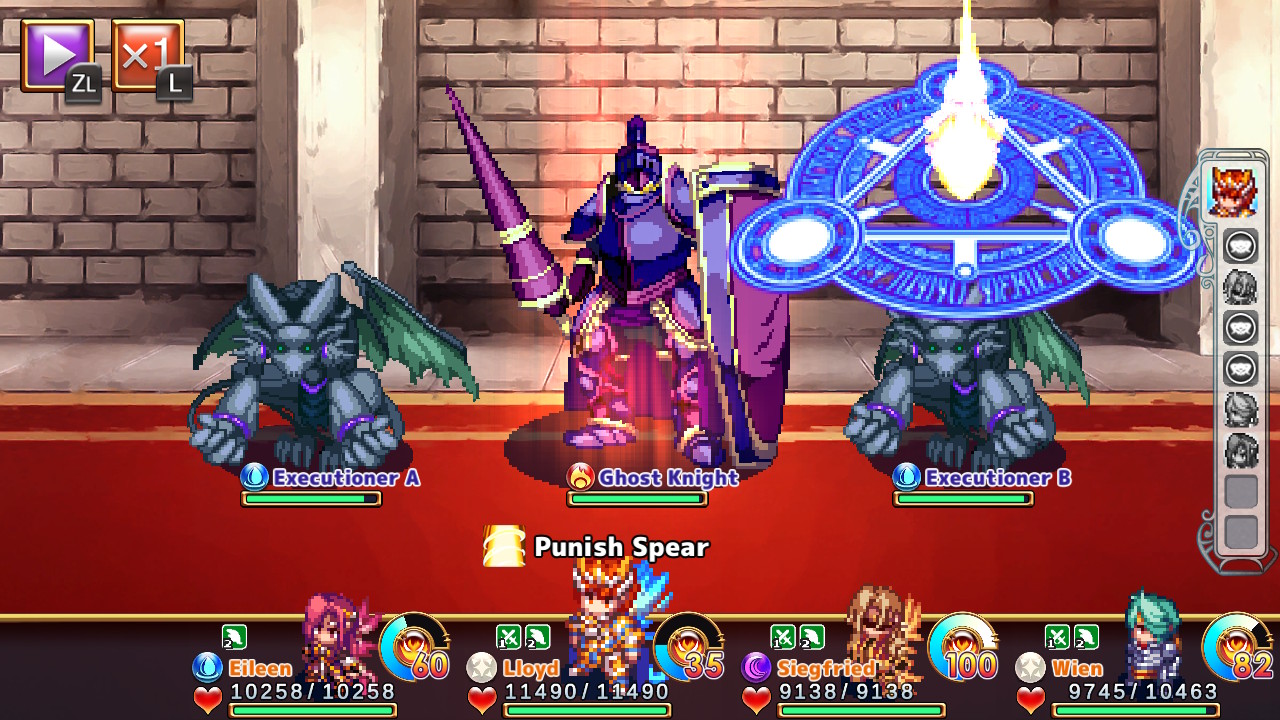 There are “side quests” in Legend of the Tetrarchs, though they function more like a list of objectives you’ll automatically complete along the way rather than being true side content. These tasks range from killing certain enemies, dealing a specific amount of damage, or progressing the story to a certain point. You are always rewarded for your efforts, and the list of available objectives is constantly changing based on your actions. This is a good, albeit passive way of rewarding players for their time, though you’ll never really have to go out of your way to complete their requirements. These objectives do help fund the inevitable goldsink that is the strengthening system though, and you’ll occasionally get some carmines and treasures on top of that!

Speaking of treasures, you’d do well to comb each area you come across for goodies. “Treasures” here equate to very minor (but stackable) bonuses, like +1 to crit and so on, that can be found within inanimate objects on the map (like barrels). Unlike most KEMCO RPGs, Legend of the Tetrarchs actually encourages, and rewards you for exploring each area thoroughly – do it!. This is a very cool feature that can definitely add up over the course of a playthrough if you are persistent with it.

It wouldn’t be a KEMCO RPG without microtransactions, right? I have to give credit where its due though – Legend of Tetrarchs, by far, has the most fair and minimally invasive microtransaction system (for a KEMCO Switch RPG) thus far. There is no premium currency, no farms, no lottery, and no pay to win – everything can be experienced without dabbling in microtransactions whatsoever. At the time of this writing, the only microtransactions are experience and gold boosters, in addition to the aforementioned “no encounter” switch. I’ll admit that the no encounter mode was definitely enticing due to how tiring the encounter rate can be, but these features are absolutely unnecessary within the confines of a normal playthrough. If a KEMCO / Hit-point / EXE Create employee ever reads this review, I strongly encourage you to adopt this type of premium system in EVERY game you have ported to the Switch. 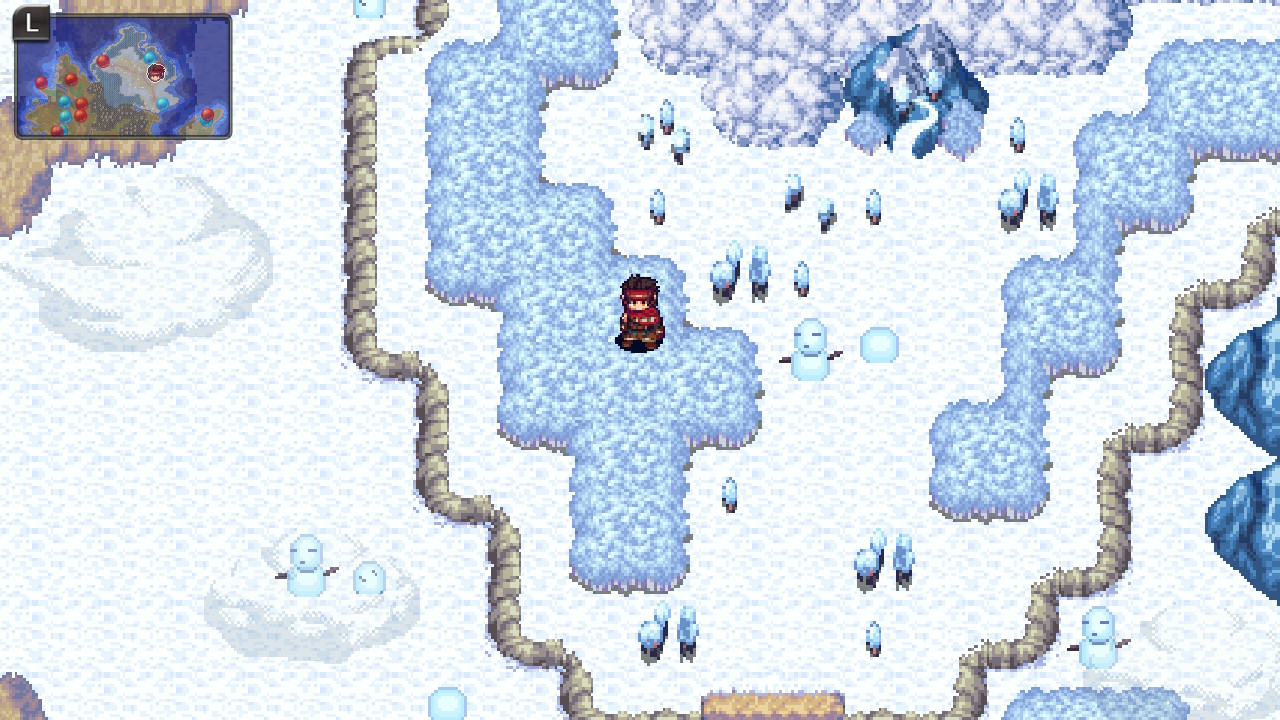 From what I’ve seen (so far) on the Switch, Hit-Point always does an excellent job in the graphics department. The spritework and asset design here is really well done, some of which could easily stand next to your favorite SNES era RPGs. Equally pleasing is the soundtrack despite its repetitiveness. The difference here is that you can embrace the repetition because most of the tracks are so well done that you don’t mind listening to them multiple times over. There aren’t really any negatives to mention, though the pixel-based enemy sprites on top of hand-painted backgrounds in combat do take a little getting used to at first.

Within the first few moments of Legend of the Tetrarchs, I knew I was in for a treat. While it does ultimately lose some momentum due to questionable plot sequences and an excessive encounter rate, the core systems at play should adequately satisfy the average retro RPG consumer. The fact that the standard microtransaction systems have been almost completely gutted certainly adds to the appeal of this title, too. While it isn’t my favorite KEMCO Switch RPG to date – that would be either Alvastia Chronicles or Dragon Sinker – Legend of the Tetrarchs does more than enough to prove itself as a standout title in their current lineup.

WHY did they do this Kemco RPG battle system in 1st person? Unless they plan to add a bunch of depth to character reactions and feedback (similar to Phantasy Star 2 or Wizardry 8 or Might and Magic 3-8), 1st-person RPG combat is much harder to jazz up than 2D or 3D. Even having the sprites lined up in Final Fantasy 1 fashion is a lot more engaging, especially if your current weapon is reflected on your sprite. I like Kemco RPGs on Steam in that many of them often allow me to play in Japanese. Using a game as… Read more »

I don’t know, I kind of like the perspective change! I mean, it isn’t the best example of 1st person combat, but it is a nice change of pace from what they normally do. IMO, of course 🙂

I’m pretty sure that this one has a language option, but I could be wrong. Wish I could experience these stories in their native language for sure!