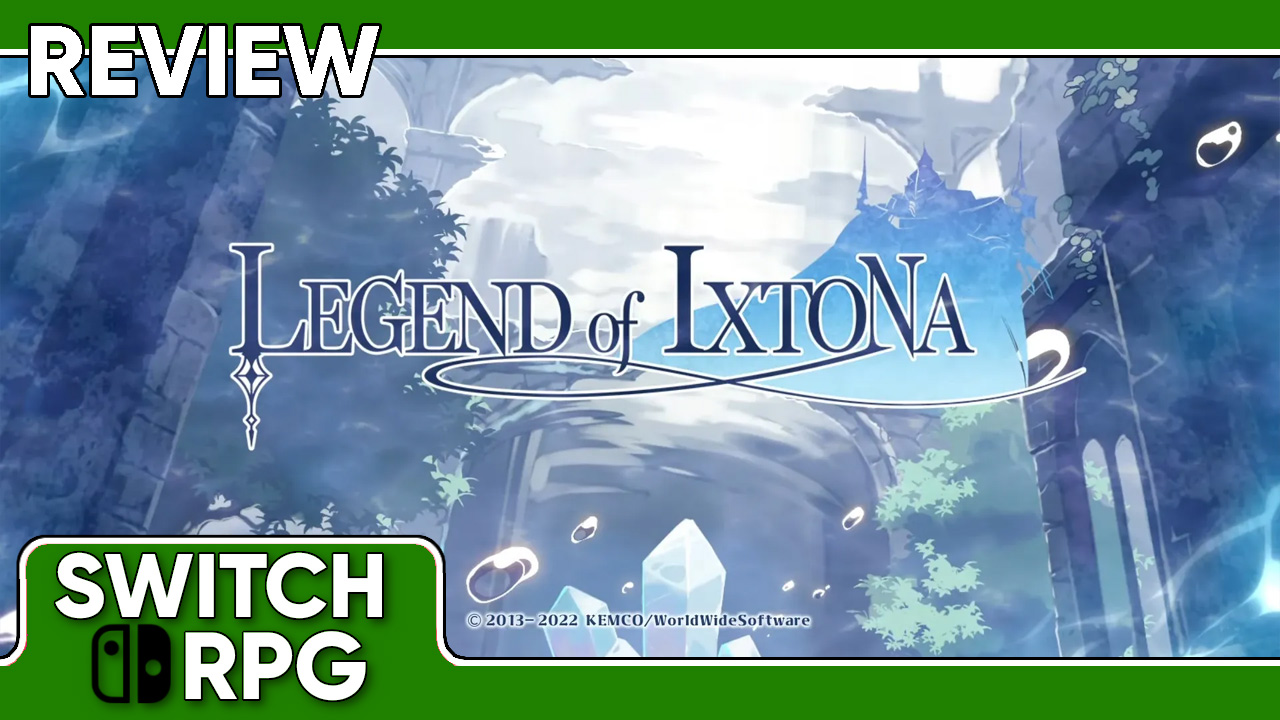 The tactical RPG Legend of Ixtona is the latest release from publisher KEMCO, but the first ever offering by developer Worldwide Software on the platform. The game is technically not new – in fact, it was released on mobile devices close to a decade ago. This is not unheard of in the realm of KEMCO, however, but I certainly don’t mind when games try and catch a second wind on a different platform.

As is the case with any mobile game port, the key is in its implementation and Legend of Ixtona is certainly one of the better examples of successful integration into a buy-to-play business model (at least on “normal” difficulty”). While not as interesting or impressive as some of its similarly priced peers, such as Mercenaries Rebirth: Call of the Wild Lynx, the game does provide reasonable compensation for its budget-friendly price tag.

Legend of Ixtona takes place in the kingdom of Ixtona, where a long-winded battle was recently resolved and an era of peace is just on the horizon. The breath of fresh air doesn’t remain for long, however, as the king’s bastard (kind of?) son, Erdax, murders him and sends his younger brother and true heir to the throne, Kyle, away to help develop a nearby village. As the plot progresses, Kyle amasses a band of loyal companions that would love to see him placed back on the throne, but Erdax and his fellow usurpers will not be overthrown with ease. 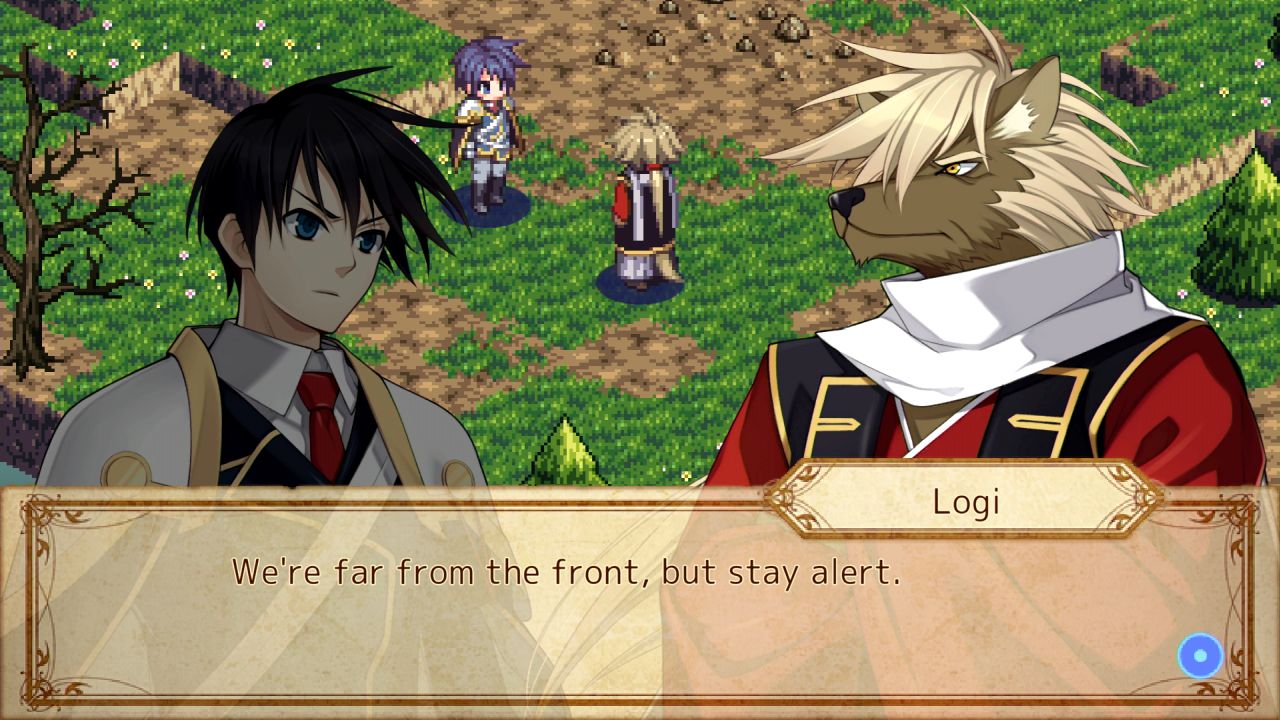 While these things are going on, a secondary plot is forming around the player’s own customizable character and their companions, who have been scattered about the world. Once the two parties meet, however, it is clear that their destinies are intertwined and that there’s more than meets the eye regarding the late king’s assassination, the nature of the world itself, and those which inhabit it.

Overall, the narrative of Legend of Ixtona is fairly interesting for a budget-tiered RPG, some of which may have one wrestling with their own emotions due to real world parallels. When all the plot cards are on the table, though, it does feel a bit “too out there” and disjointed, and the one-dimensional (but varied) cast and average-at-best dialogue certainly don’t do it any favors. In the realm of budget experiences, though, it is solid enough.

Legend of Ixtona is a turn-based tactical RPG that has the player traversing a top-down, node-based world map, exploring towns and developing a village (more on this later) from a static first-person perspective, and pitting their team against foes in various isometric, grid-based maps.

Most battle objectives involve vanquishing all foes on the map, but may occasionally only require certain enemies (typically bosses) to complete. While story battles cannot be completed multiple times over, most battlefields can be played again with different enemies after their initial completion. 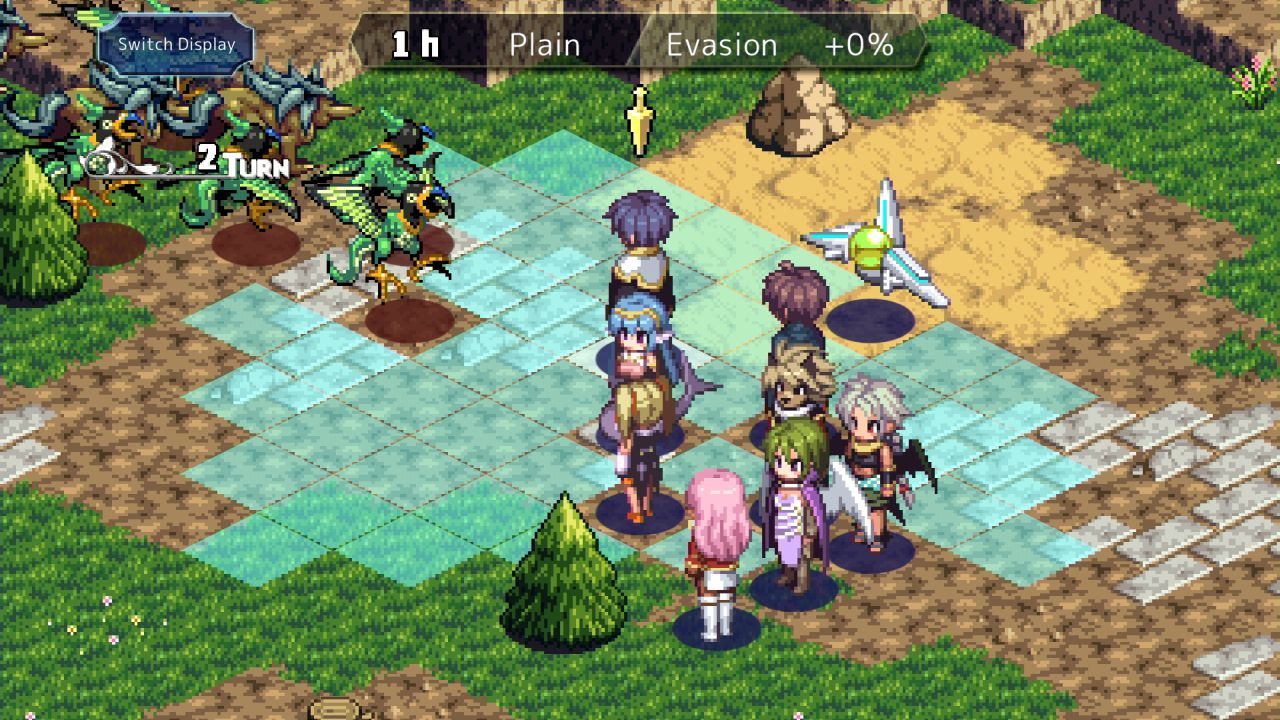 The player’s side of the battlefield will take their turn in its entirety before the opponent does, and this process repeats until the map objectives are completed, or the player is defeated. Before diving into any map, the player is able to configure their party’s equipment, classes, and abilities in order to best tackle whatever task is at hand. Both the player and enemies have an array of abilities to choose from each round, though combo and ultimate abilities are only available to the player.

In general, each player unit on the battlefield will accrue a certain amount of SP per round, which can then be used to coordinate a combo attack with a comrade at 50%, or unleash a character-specific ultimate ability at 100%. Most encounters do not require a deep level of strategy to complete (on normal – there are two higher difficulties available, though), but both combo and ultimate attacks become crucial in conquering many of the game’s later, more challenging boss levels.

One of the two aforementioned higher difficulties actually only opens up after completing the game once and beginning a New Game Plus file, and is sure to not be for the faint of heart. Outside of the main story and optional battles, players can also partake in various side quests which aren’t super interesting in terms of storytelling, but do occasionally reward some nice loot for their completion.

Legend of Ixtona features a class system where each unit can eventually choose from five distinct classes. These choices are rather superficial, however, as subsequent classes are more of an extension of previous classes rather than wholly unique entities. The idea is to level up each “class” to at least class level six, which will unlock all three passives that can then be equipped across any class. 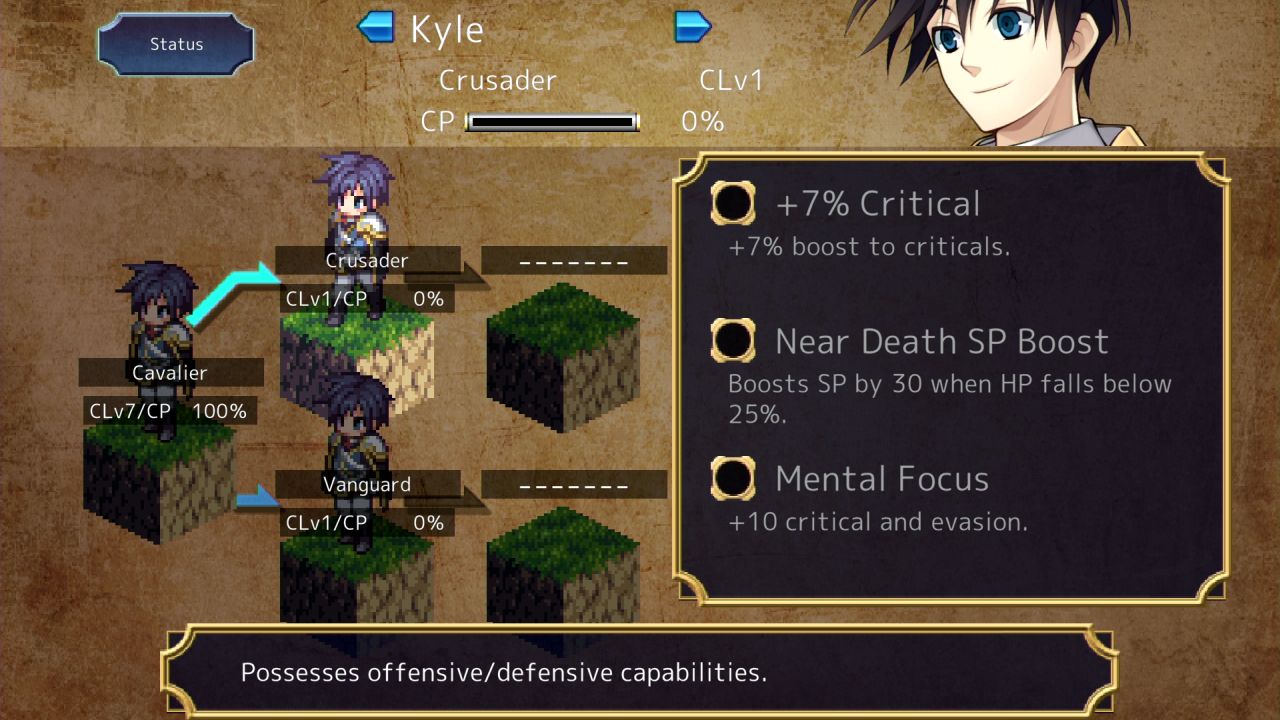 Only three passives can be equipped for each unit, but mastering a class (class level seven) will allow the player to use the mastered class’s passives ON TOP of three additional passives for a total of six. In addition to passives, each class has its own abilities that will unlock at various levels that do not have to be equipped (like passives) and can be used across any class.

Despite the lack of meaningful unit-specific class depth, Legend of Ixtona does plenty to differentiate one unit from another. This is especially true when it comes to special units that are acquired through advancing the story, as their toolkits widely vary, particularly when compared to generic, recruitable units. Guilds in town allow the player to recruit and customize additional units that, at least in normal mode, have little use on the battlefield (story characters, in general, are plentiful and far superior), but are still key in acquiring materials used in other mechanics.

Up to five generic characters can be sent out on a dispatch to previously cleared battlefields, which will net the player various materials and components either after 30 minutes of real time have elapsed, or the player has completed one battlefield. While the same components from dispatches can be found by manually clearing battlefields, it certainly doesn’t hurt to have free materials on top of that (and this only gets more useful in the later stages of the game).

In the beginning, Kyle is tasked with overseeing the development of a village on the outskirts of Ixtona. Here, the prince is able to name the village, appoint its overseer, and research and develop various items and equipment. By investing funds into a variety of different races, the player can then use that race-specific knowledge in developing a large assortment of weapons, armor, and items, some of which cannot be found in traditional stores. 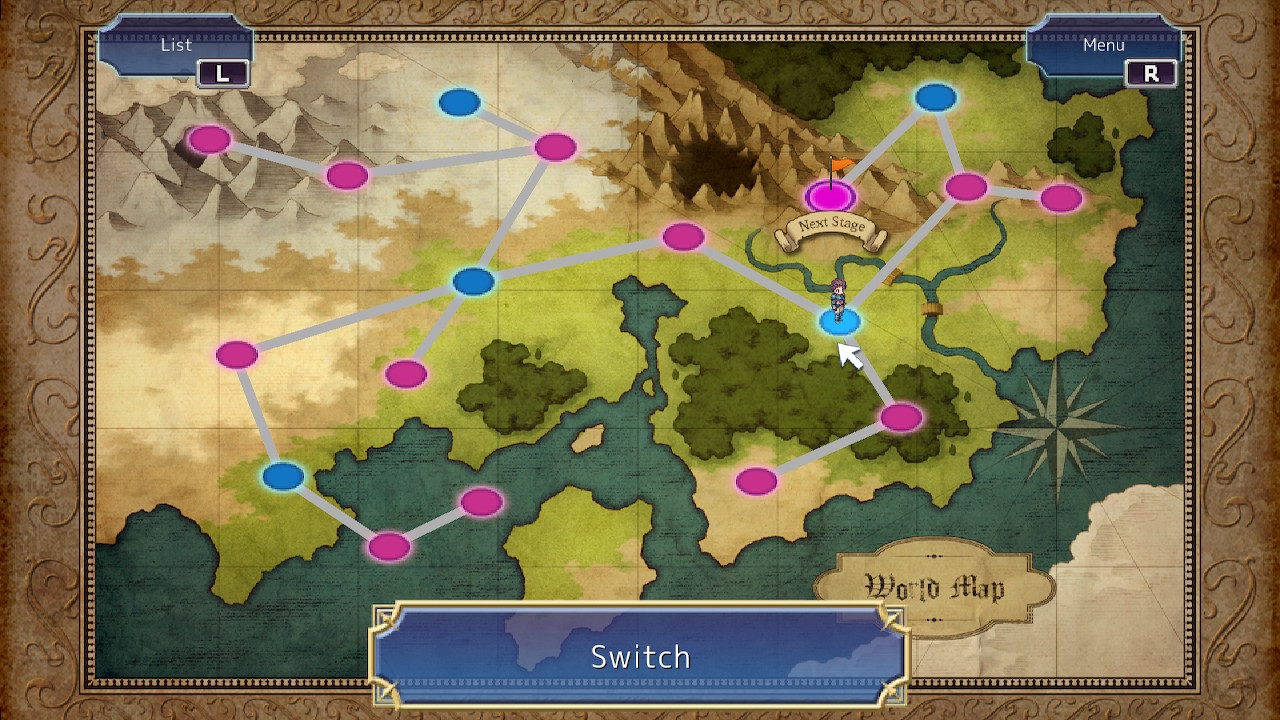 While the developed items do require the aforementioned materials from battlefields and dispatches, they also are much cheaper than buying them in the store and can open up more powerful tiers of goods before they’re even available in standard stores. Although this system starts out relatively innocent, soon it becomes quite the chore to develop higher tiers of items due to a lack of materials – almost as if it was tuned to encourage microtransactions in the mobile version, but not really adjusted for consoles.

That said, players can completely ignore the limited “add-ons” Ixtona does offer and can complete the entire game (on easy and normal at least) without ever having to partake in the free premium currency and shop it still touts (that may not be the case in harder difficulties, though).

Legend of Ixtona’s presentation is easily one of its more notable features. All important characters have totally unique looks from one another both out in the field via pixel art, and in town and events through varied and emotive portraits. Spells and other combat abilities aren’t overwhelmingly exciting, but are varied enough for a budget title. And that notion extends to other points of Ixtona’s presentation, such as the lack of unique enemy sprites and a small (but decent enough) soundtrack. This is par for the course in terms of most budget experiences, let alone those of the KEMCO variety. Overall the visuals and audio do a solid enough job of conveying key moments and immersing the player well enough.

While not the de facto budget-friendly tactical RPG, Legend of Ixtona does just enough right to be worth your consideration. It is on the short side – 10 to 15 hours at most – but I’m of the mind that not every game has to be a sprawling, 40+-hour epic. Those willing to commit to a New Game Plus run on a harder difficulty will certainly get some additional mileage out of the experience. Although Ixtona certainly leaves some to be desired, it also has me curious what we may see from Worldwide Software and KEMCO on Switch in the future.