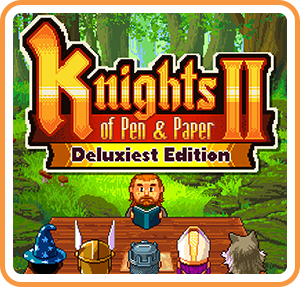 Knights of Pen and Paper 2 has you dusting off that snack-encrusted table once again to dive into the world that your resident Dungeon Master brings to life. This time, however, your cut and dry fantasy tale is waylaid by an invasion of the Paper Knight, a second edition character that looks to use his rule-defying capabilities to wreak havoc in your first edition game world. And wreak havoc he shall, sending your band of adventurers all across the map in order to track him down and bring an end to his dastardly plans.

But it wouldn’t be a tabletop RPG or a Knights of Pen and Paper game without humor, and the second game is no different than the original in that regard. While the Paper Knight’s chaos has the world in dire straits, it is told in a “tale amongst friends” kind of way rather than being conveyed through a serious tone. There are geek culture references and jokes abound, which can be grating if consistently delivered humor is not really your thing. To me though, it properly simulates the feeling of playing an actual tabletop game in the company of your friends.

Much like in the first game, you start off by filling two seats at the game table, with three additional spots opening up as you progress the story. You’ll pick the player, race, and class, with the sum of the three parts determining each character’s beginning statistics and their associated skill setup. While there are clear advantages for building out characters in certain ways, nothing is in place to discourage you from experimenting with party makeups as you see fit.

Class skill choice is limited in Knights of Pen and Paper 2, much like it was in the first game. But the accompanying “less is more” concept has been grandfathered in as well, with each of the abilities acting as distinct, useful tools for your repertoire. Investing deeply into one or two skills per character rather than spreading yourself too thin is key, of course, and the abilities you gravitate towards will be dependent on your party composition as a whole. But don’t let the lack of a skill tree turn you away, as many classes can serve under the banner of multiple roles, meaning you can do a lot of different things with the limited skills you have been dealt.

Building a team with the holy trinity of tank, healer, and DPS isn’t required by any means though, but the system is there if you want to take a more balanced and traditional approach to things. You aren’t held to your initial loadout for the entire game either, because taverns across the world allow you to swap between new and existing characters at will.

Knights of Pen and Paper 2 is almost identical to the first game in terms of actual gameplay, though a few minor differences do exists between them. You’ll spend the majority of time traversing between various points on a large world map, fighting through mobs of enemies in turn-based fashion along the way. Random battles may pop up if you fail dice rolls in between two locations as well. Of course, decking out your team with the latest and greatest spoils is a part of the process, whether it be through purchasing gear from shops, crafting things yourself, or delving into the deepest of dungeons in pursuit of their treasures (hopefully). Dungeons are randomly generated each time you enter and thrust you into situations that require you to live with the consequences of the choices made within them.

Knights of Pen and Paper 2 is noticeably easier than the first game. The general ease of difficulty is great for RPG newcomers, but may come as a disappointment to veterans of the franchise and RPG fans in general. It isn’t completely void of challenge, but truly dangerous situations tend to be few and far between. However, I found the actual mechanics of combat to be more engaging in Pen and Paper 2 despite things being a little easier. Often, abilities can spread their damage, conditions, or both to adjacent enemies on the screen. A class like the thief can take advantage of conditions on enemies by inflicting greater damage to those with ailments. These changes, while minor, lead to a more satisfying flow of combat in comparison to the first game.

While conditions, such as bleeds and burns, can be healed through items and abilities, they also have a chance to simply clear up on their own each turn through automatic dice rolls. Admittedly, this has the potential to negate the challenge involved in managing conditions on the player’s side, but it is balanced out by the fact that conditions you inflict to the enemy also have the chance clear up on their own. All in all I think it is a good change, as it does make the game more approachable to casual audiences while not completely obliterating the challenge associated with it.

The lower level of difficulty has paved way to a lesser need for grinding as well. I’ll admit that I did not particularly enjoy grinding for money outside of the main and side quests in the first game, so the fact that you can get away with just sticking to the main forms of content in Knights of Pen and Paper 2 is a good thing in my books.

Crafting in the original Pen and Paper could be rather frustrating at times, as it was heavily reliant on a percentage-based system for success. But that is not the case here, and in its place lies a more streamlined, traditional system that allows you to create items from the ground-up, or enchant existing equipment to improve their stats – all with 100% success rate. Although you are unable to enchant/upgrade unique equipment found in the game, it does allow for improving upon normal quality gear to extend their overall usefulness. Enchanting equipment can become expensive quick, so keep an eye out on your funds to avoid having to stop and grind enemies just to make it to your next destination.

Speaking of money sinks, Pen and Paper 2’s new investigation mechanic is an investment in itself. Most locations allow you to investigate the area in order to uncover potentially useful items and equipment, most of which are completely unique and unobtainable by any other means. But something being unique doesn’t always make it useful or worth it, and a fee of 5 gold per “roll of the dice” ultimately determines your success of unearthing the goods in the first place. Basically, it is a big game of chance that costs you money each time you roll the dice (which adds up), and should only be pursued after you’re sitting on a nest egg yourself.

If you need even more money sinks, upgrades to the “game room” make a return in Knights of Pen and Paper 2, giving you boons and cosmetic room upgrades in exchange for cash. Other unlockables such as player types, classes, and even DLC story missions can be purchased with in-game money as well.

The most notable difference between the original Pen and Paper game and its sequel are the graphics, which are leaps and bounds ahead of the bar set in the first game. While the scope of animations remain consistent across both titles (ie. a simple horse sprite acts as your means of travel between destinations, attack animations are limited, static backdrops represent most locations), the quality of pixel art has been vastly improved, and is outright gorgeous in most areas.

While the dungeon master and group of nerds themselves look really nice, the enemy’s overall graphical fidelity range from just okay to great. The audio present in Knights of Pen and Paper 2 is more or less a repackaging of the assets used in the first game, so take that for what you will. For me, the tracks lack the ingredients necessary to become really memorable, but they do a decent enough job of complimenting the graphics and setting of the game.

Even though Knights of Pen and Paper 2 is less difficult than its predecessor, I feel that it is a better experience overall. The tweaks to combat and less emphasis on grinding are nice, and there is plenty of content to be had through the main campaign, included DLC, and just by going back and replaying with a totally different band of nerds. But if you just look at the innards of the gameplay, it is very much the same loop that was present in the original game, which might not be enough for those looking for something more than what was offered before. Regardless, whether you’re looking for a way to simulate the pen and paper experience in a solo-friendly/casual way, or are just interested in traditional, turn-based RPG fare from a unique perspective, Knights of Pen and Paper 2 has a lot it can offer you.

Tags: Knights of Pen and Paper