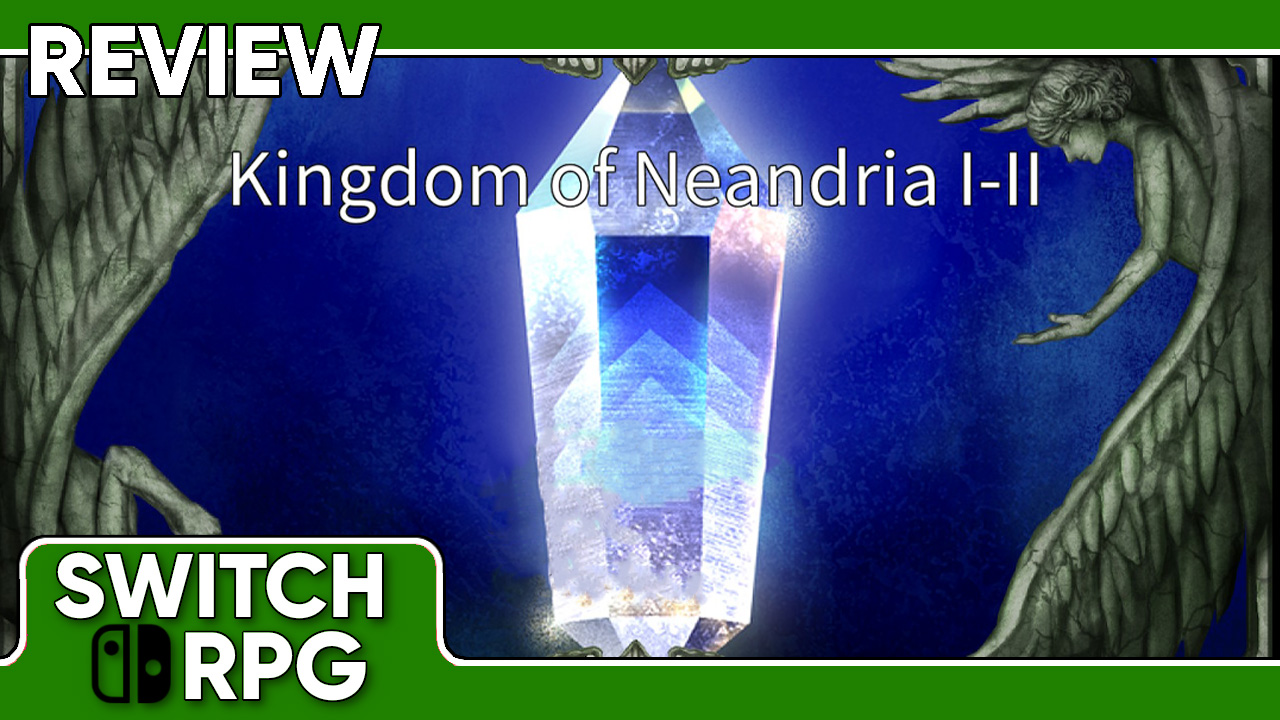 Game development is hard work, but that hasn’t deterred many people from taking a stab at it anyway. More often than not, hobbyists in the development seat come away with two things: a new perspective and appreciation for indie developers, as well as a demo or game of their own that may not be entirely logical, let alone functional, in design. It’s not easy to make something worth showing to those outside of your own social circle, and even more difficult to make something that truly stands out. I know this from experience by developing and commercially releasing my own game almost a decade ago.

RPG Maker MV on the Nintendo Switch allows anyone to develop their very own RPG that can then be played, for free, by anyone via the RPG Maker MV Player app. While its inherent ease of use and prebuilt assets pave the way for anyone to create their own “masterpiece,” most will be lucky to create something that’s even remotely worth playing (remember, some people release games in a buggy, unfinished state just for giggles). In this case, Kingdom of Neandria, a reportedly 1600+ hour, undoubtedly exhaustive effort leans more towards the former, especially when considering the limitations of the engine and hardware. But it does have a few issues. 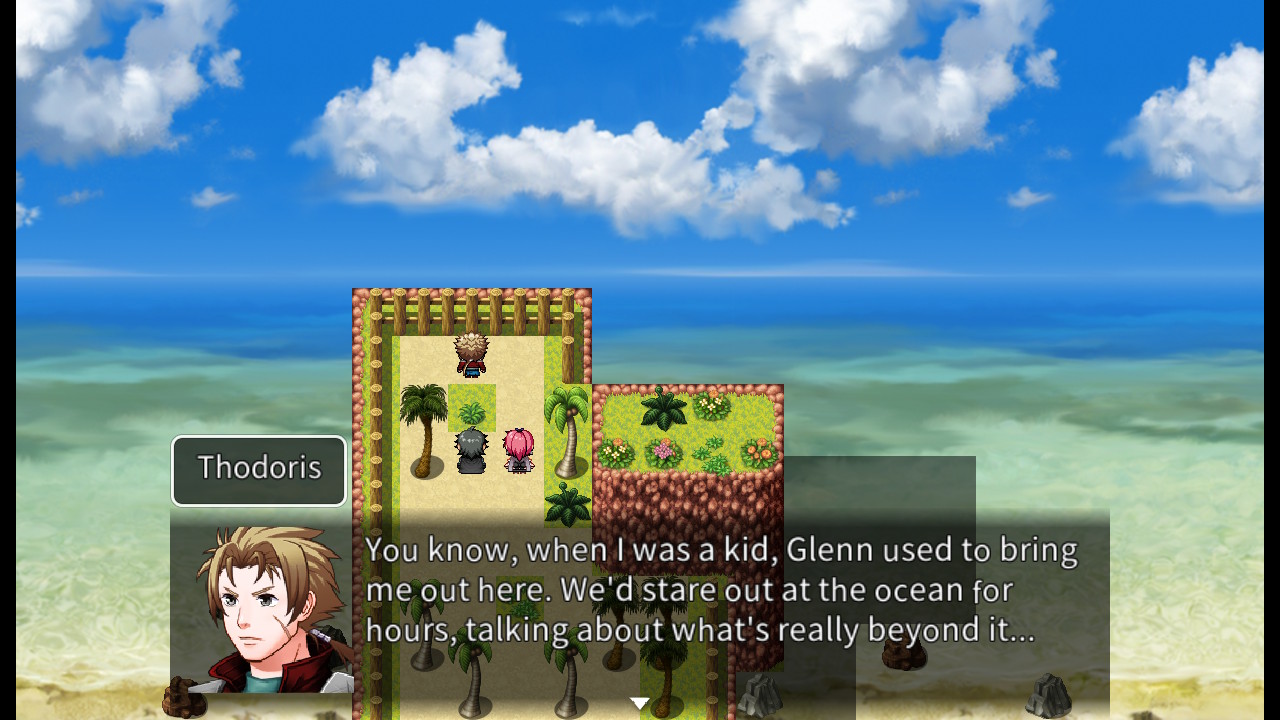 Kingdom of Neandria begins with a single problem that soon spirals out into a much bigger situation. The hero of the story, Philo, is awakened one night by his daughter speaking in a foreign tongue. While most would write this off as dream-begotten babbling, Philo’s daughter has been completely mute since birth, never once uttering a sound. She has also been very weak as of late, leading to even more worry and wonder regarding the recent event.

After an evaluation by the local doctor, who also seems puzzled by her condition, Philo desperately seeks out a second opinion, however unorthodox it may be, from the local witch doctor. After a series of events, it is revealed that the words Philo’s daughter spoke, for some reason, seem tied to horrific events that almost wiped out the kingdom of Neandria over a century ago. This revelation leads to an overarching concern surrounding the resurgence of a certain feared faction – and everyone’s favorite trope, magical, color-coded crystals – that could ultimately cause a near-disastrous history to repeat itself.

While the core narrative is not overly impressive on its own, Kingdom of Neandria nonetheless succeeds by way of compelling characters and excellent writing. There is a nice peppering of playful banter in between truly gripping moments, and the majority of characters are developed in a meaningful way. But despite solid writing throughout, there are still numerous spelling mistakes – one literally within the first ten minutes – that do somewhat take the player out of the experience. That said, a few mistakes spread throughout what is clearly a sizable script is certainly forgivable, especially considering the controller limitation (when in the editor) and quality of writing otherwise. 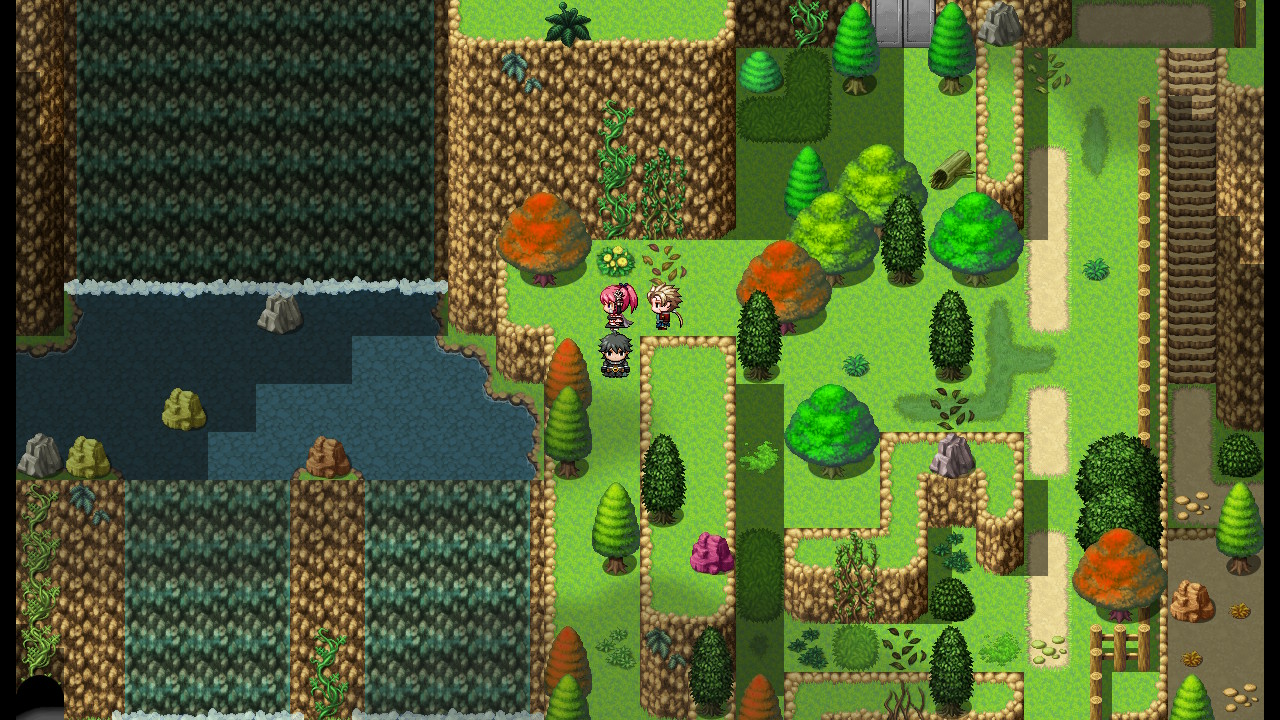 Kingdom of Neandria is a turn-based JRPG that has Philo exploring the kingdom not only to cure his daughter, but also to uncover the truth about her alleged connection to a grim past. Along the way, Philo will face off against hordes of enemies and the occasional boss and while traditional side quests are few and far between, there are plenty of nooks and crannies scattered about the world that often reward the player with new items and challenges. Dungeons often feature a mix of traps and puzzles that must be bested in order to progress – some of which are impressively complex – and the curve of difficulty there is exceptionally smooth.

What isn’t as smooth, however, is the combat, particularly when it comes to boss fights.

The core of combat in Kingdom of Neandria is simple. Once the player has chosen actions for the party, both sides then play out based on agility (barring any negative status effects). The party has access to two types of special abilities: action skills and magic. The former is fueled by AP, which generally starts close to zero and is slowly accrued over the course of the fight, while the latter is tied to a traditional MP reserve. 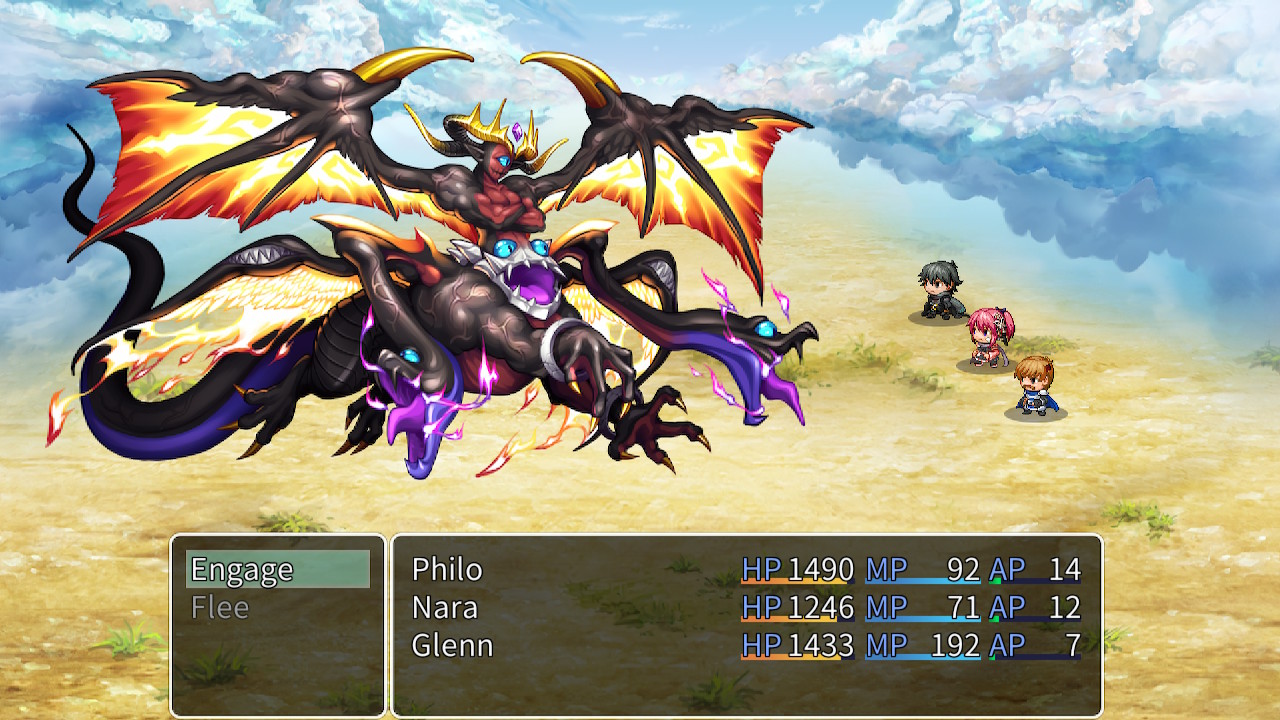 In most cases, action skills have limited use due to their high requirements and, for some characters, lackluster design. Most of them take a large chunk of AP to execute, and only a few are more than situationally useful. Later access to consumables and class upgrades (for Philo) help make things a bit better, but there’s still room for improvement. Increasing the natural accrual of AP and/or reducing AP required across the board, in combination with some more useful action skills in general (less HP/MP/AP conversion skills), would go a long way in making them feel a lot more satisfying to use. In comparison, magic is consistently more useful despite later tiers requiring large sums of money to unlock (which, to be honest, feels a bit out of place).

Combat balance is a bit odd. Enemies can attack anywhere from 1-3 times each turn, and this can be especially troublesome against foes that deal large splash damage or induce debilitating status effects since they can potentially use these attacks three times in a row. Standard fights generally aren’t a concern, but boss fights can be quite deadly and potentially a huge waste of time due to their massive health pools and high variance of RNG. It is entirely possible for a player to be well into a boss fight and randomly be hit with three nasty attacks in a single turn that could possibly wipe even a party at full health. Boss fights should definitely be difficult, but with more of a consistent, telegraphed challenge rather than relying so much on a roll of the dice. Furthermore, bosses don’t need health pools the size of Texas to be challenging. 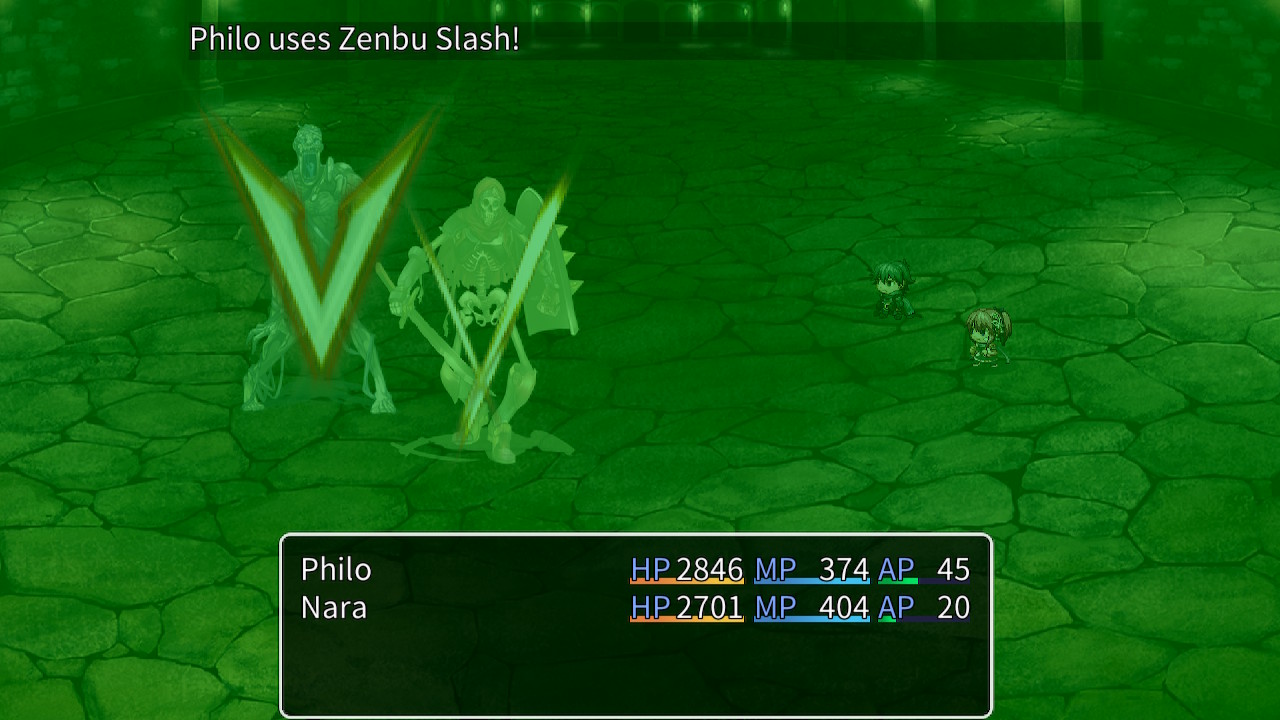 In the game’s defense, status effects have been made an integral part of combat when so many other games handle them as an afterthought. Slowly sapping a boss with bleeds, poisons, and burns while attempting to stun them for free turns can be huge over the course of a long fight. Likewise, reacting to the party’s own negative status effects before they get out of hand – and they certainly can – is essential.

Kingdom of Neandria features no random encounters, as all enemies are shown on the maps themselves. That said, most of them still feel mandatory anyway due to the aforementioned boss difficulty and sheer amount of money needed for consumables (for those long boss battles) and later, magic spells. It’s also worth noting that save spots are few and far between, and tracking down the closest one before taking on a high-risk fight is pretty much essential for safeguarding progress.

The Switch version of RPG Maker MV comes equipped with a very limited number of assets, and no way to insert custom ones. Without question, it can be difficult to make lemonade with those proverbial lemons, but Kingdom of Neandria does a fantastic job making do with its fate. Each area is intelligently designed, with asset placement and design feeling both purposeful and natural. There’s a distinct difference in quality when comparing areas in the newest chapter (II) with the previous one, but even the earlier stuff looks nice and feels organic. 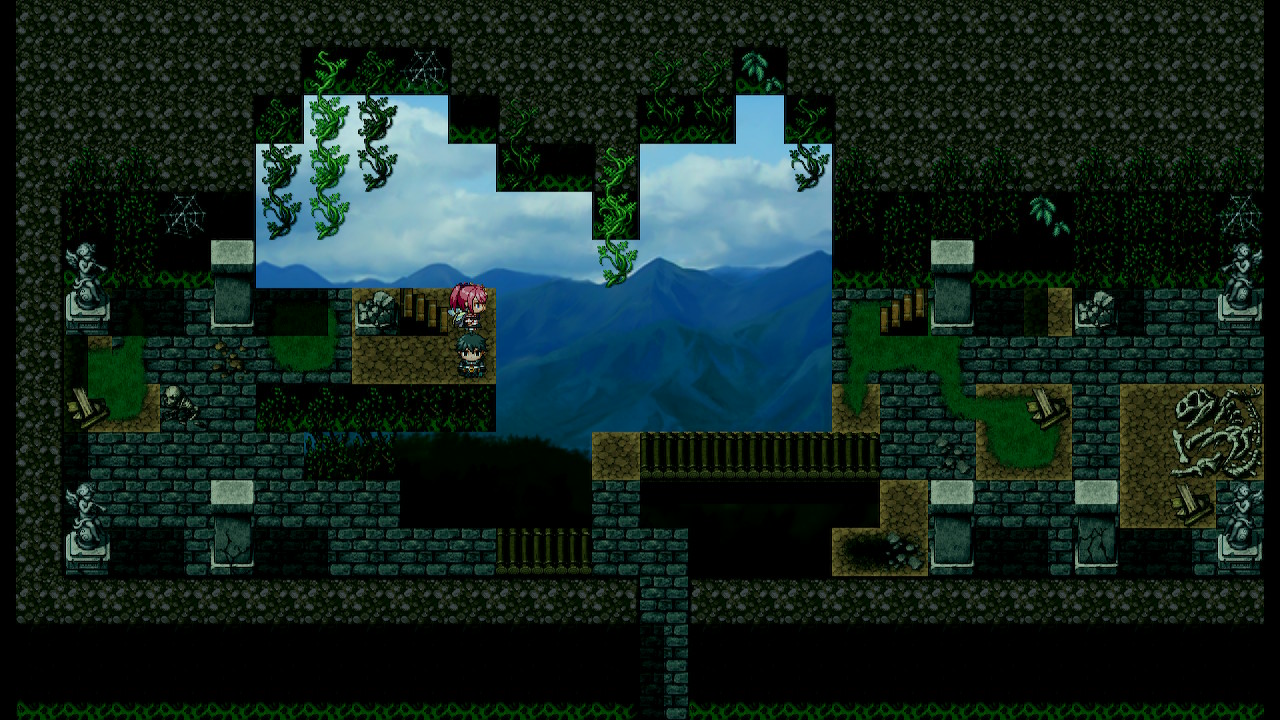 That notion extends to scripted events, which are filled to the brim with emotes and sound effects that help convey the situations at hand. I know from experience that these little touches can be very time consuming to implement, so their liberal use here is very much appreciated. The choice of music is also excellent, with each area having its own unique look and feel that is only solidified by its accompanying track. This is no small feat considering, again, that the Switch version doesn’t allow for custom assets.

For as much love and care that has clearly been put into Kingdom of Neandria, there are some unfortunate side effects that ultimately come with choosing this avenue to package it. To put it simply, RPG Maker MV doesn’t run optimally on the Nintendo Switch, as there are numerous incidents of sticky controls, long load times, sluggish menu scrolling, and even buttons sometimes doubling up on the inputs (a potential nightmare in boss fights). All of this makes playing a game, let alone enjoying it, much more of a challenge than it should be, but I imagine this is completely the fault of the engine and platform itself rather than something specific to the game.

Amidst obvious engine limitations and a few questionable design decisions, Kingdom of Neandria spins an enjoyable tale that is clearly a labor of love. And best of all, it is free! Regardless of flaws, it is difficult to view this game as anything but a passion project, especially when considering the constraints of developing with limited assets and from completely within the Nintendo Switch. That, at the very least, is commendable. Admittedly this is the only RPG Maker MV title I’ve played on the Switch so far – that changes soon, perhaps turning into a monthly column – but I can’t imagine that many will feature the same level of polish as Kingdom of Neandria.

That polish isn’t noticeable through every facet, though. Combat in general could use some work, but it’s not so far gone that it couldn’t be brought back to the drawing board for some refinements prior to Philo’s next outing. The writing overall is excellent, but it could use another pair of eyes to sweep up any lingering errors before chapter III (and beyond) makes it to the printing press. Ultimately, if this is just a taste of what Nestor has planned for us all in the future, then I’m genuinely looking forward to what comes next.