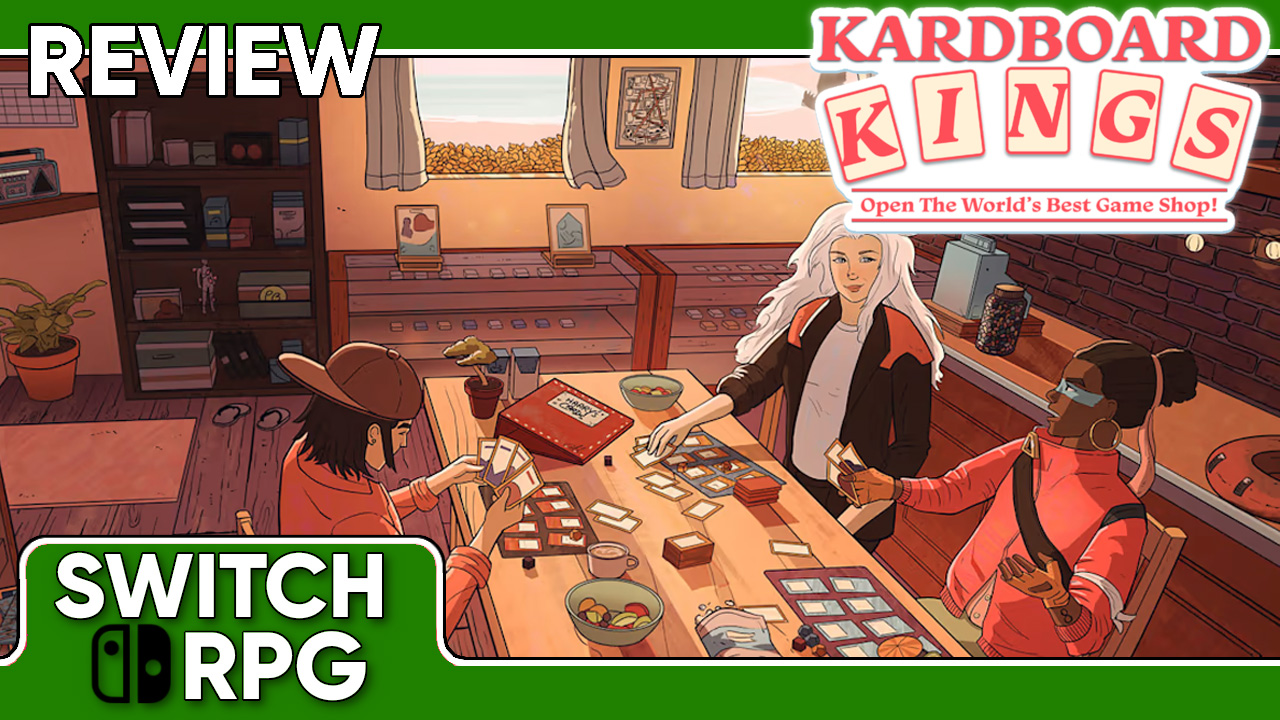 Hey. It’s me. The guy who loves tabletop inspired games on the Nintendo Switch. Did you really think, given my extensive history of reviewing games focused on this concept, that I would ignore the launch of a game about owning a trading card game store? A pox on your family. A POX, I SAY.

…So how is Kardboard Kings? Does it not only let you live your dreams of being a card store manager, but also a professional card game player? Yes, it does. But much like the cardboard collectables from which the game takes its name, it’s a bit flat, lacking the heft to support a lofty concept.

Kardboard Kings is a point-and-click simulation game on the Nintendo Switch, wherein you manage a card shop and entrench yourself in the local card-collecting scene despite not-actually knowing a lick about how to play the game, itself. But the method of profiteering our protagonist has settled upon is the act of buying and rebuying cards based on market trends. Each day, you’ll have a bit of time before your store opens as well as endless time after close to check on your computer and your calendar, which will bring up a digital marketplace and a list of events that are rumored to occur in the near future. The marketplace is where you buy the merchandise for your store, often at as high a discount as possible, as you can sit on your inventory until a certain kind of card rises in popularity, at which point you can put them on shelves for customers.

This is hardly the only way to make money, however, as some customers will put in specific requests for card types that can fetch a higher price. Ultimately, card value is largely determined by their quality and unique traits, of which Kardboard Kings has created quite a few. Cards can belong to certain themes, possess a power level, foil variations, and attack types that make them more or less appealing for players to obtain. Depending on what events are occuring in the world outside your store, these traits can cause a card to become more or less valuable, which means more money for you, the seller. 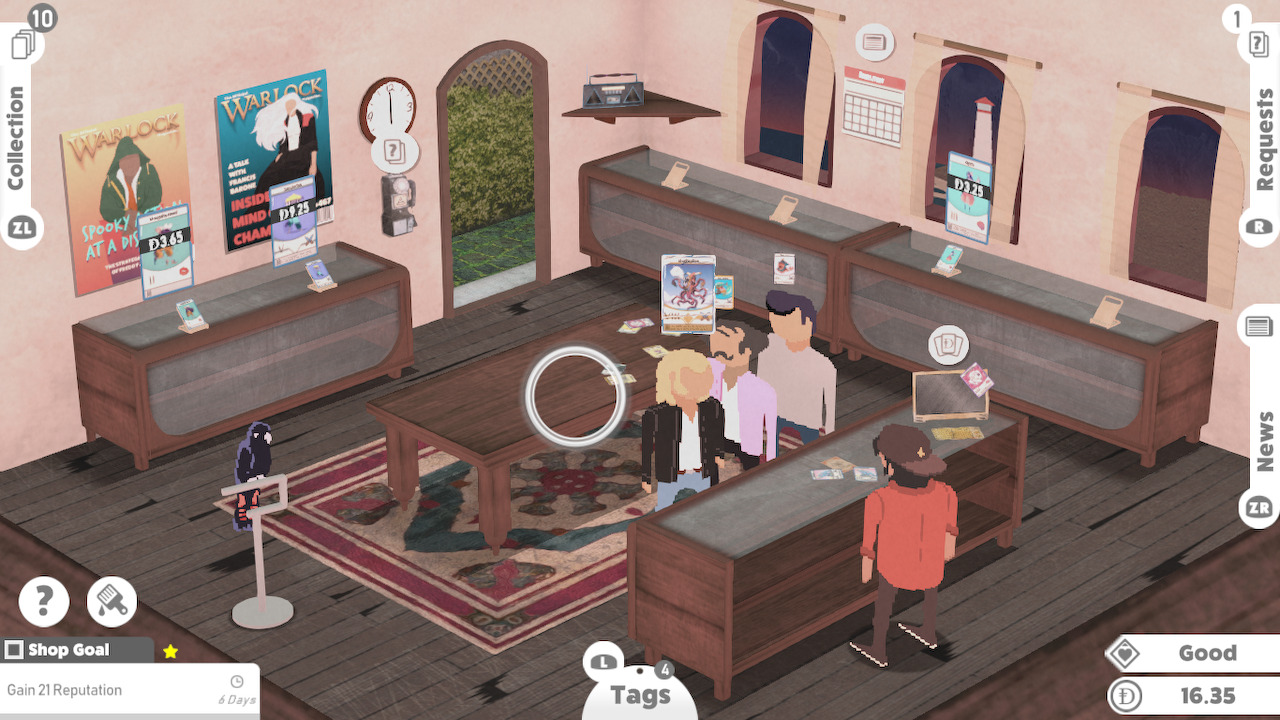 The activity within your store can vary greatly depending on your reputation, which can result in more opportunities to sell or more foot traffic. Essentially, taking some time to help out customers with their requests and offering cards at affordable prices. The best way to make a profit is to watch the calendar closely and conserve your stock when possible, and that’s… pretty much it. There are other events that the player can schedule in order to generate interest and nab some cards for themselves, such as tournaments, clearance sales, and draft parties. For the most part, the tedium of buying, holding, and reselling is all the game has to offer… at least, at its base difficulty. The higher difficulty, which doesn’t unlock until you’ve completed the base game’s narrative, has some more stringent budgeting considerations, but this mode seems designed for those who find the core gameplay loop enthralling, but not difficult enough to replay.

I don’t particularly like the game’s input methods, which require multiple button presses to transfer a card from your collection over to a request, or cycle through display cases to place a particular card, which might accidentally replace something you’ve already set up to sell. But that’s because this control scheme is built around point-and-click controls, which can be a bit of a tricky port job. There are some mouse-based games that work on the Switch, but it can be especially tough on simulation games, which often require multiple inputs for the purposes of micromanagement. The game’s control scheme is geared towards efficient access to the menus required for buying and shelving cards, but I’ve honestly never seen anything quite like it, and it doesn’t make for a very easy pick-up-and-play experience.

The goal of Kardboard Kings isn’t necessarily to see the main narrative through to its conclusion, because that narrative is extremely brief. The goal is instead to play for as long as you’d like, or to fill out the personal card collection of Harry Hsu, the current store owner. If you do care about the premise of this simulation title, here it is: Harry’s dad, a card game champ, passes away and leaves his old shop to his son. Harry learns the ropes of shop management from Guiseppe, the weird parrot that lives in the shop, and comes to know the larger card community through his business. He also had a breakup before the events of the game, which gives him the excuse to start anew with the community that you come to know over the very brief set of narrative vignettes.

You can choose to help specific characters with their requests and speak with them when they come to your counter or make purchases, but the quality of the writing errs more on the side of tropes and wry observations. This definitely fits with the overall aesthetic of Kardboard Kings, which is, as the kids say, “a vibe.” Some incredibly catchy lofi beats mix with chunky character designs and an overall pastel color palette to create a relaxing aura that belies the sometimes stressful nature of the simulation elements. Characters have simulation models that are rudimentary and somewhat garish, but in dialogue exchanges, they appear with more endearing and richly-illustrated portraits, better selling their personalities.

The sort of laid back, inconsequential writing of the characters and vignettes is perfectly in line with this, but it doesn’t inspire any sense of urgency or consequence to the game. It doesn’t really feel as if Kardboard Kings has anything to say with its narrative, and that’s not necessarily a bad thing. It is a simulation game, after all, and this brief bit of world building invites you into the reality that Harry occupies, but doesn’t leave much of a lasting impression outside of the silly talking cockatoo and the dog that seems to like cards, too. 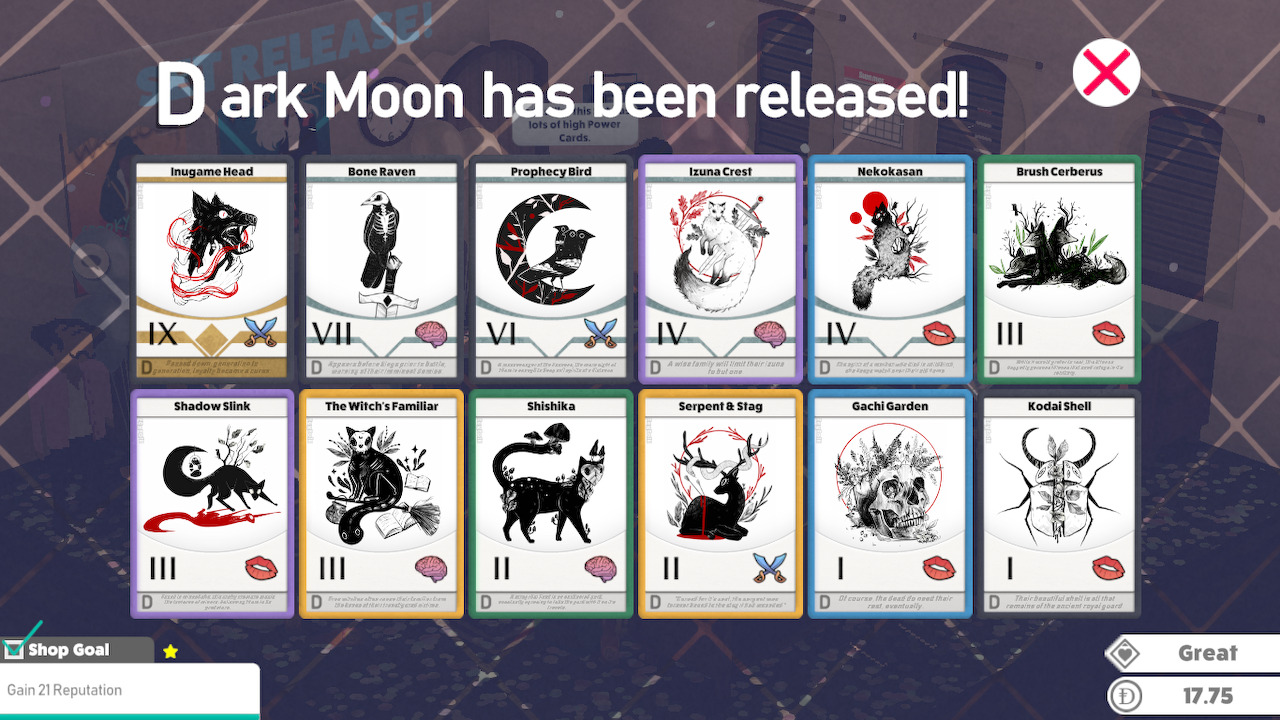 It would be a crime not to mention the varied and lovely card art that the game features, which is by far its selling point. These cards have absolutely gorgeous art to admire, and creating a collection of your own to ogle will likely involve a substantial time investment. The quality and variant details that make the cards appear roughed up or shiny and clean respectively help sell the authenticity of the simulation, but they also make for nice eye candy. There’s even a varied selection of art styles used for specific card sets, which evokes the colorful illustrations of a game like Magic the Gathering. It’s the best part of the game, and considering how essential of an element these cards are, it elevates the entire product immensely.

Kardboard Kings swings between extremes of simplistic, rote simulation and stringent micromanagement across its two difficulty settings, but there is one more element of the game unlocked after completing the main campaign: the actual card battling minigame. The Card Game Island uses the existing elements of the Warlock card game to great effect as an entire mode focused on building a deck and taking on challenges. It’s surprisingly substantial and a major selling point, to the extent that it feels a bit baffling that it wasn’t a part of the initial package. You’ll take on different challenges where specific cards receive substantial abilities, and use a points-based scoring system to attempt to overcome your AI opponents. The Card Game Island and King of Games modes are all packed into the Switch release, however, and accessing this mode only requires completing the fairly brief base narrative requirements.

Although Card Game Island is fundamentally an alternate game mode, it’s still accessed through the base card store simulation. As a fundamentally separate experience, it feels a bit strange to have to play the simulation in order to gain access, but it further sells the notion that the shop management aspect of Kardboard Kings is the main attraction. The only problem is, outside of admiring the card art, not much about the shop simulation is all that engaging. No matter how successful you become, you’ll never advance your business beyond the walls of this small card shop, which is not necessarily the point of the game, but could have at least added some sort of advanced wrinkle to the business. Kardboard Kings instead promotes the vitality and appeal of the mom and pop, small-scale business, as well as the communities that tend to thrive around them. The only problem there is that the community isn’t particularly engaging and there’s not a strong enough narrative to back this thematic statement. 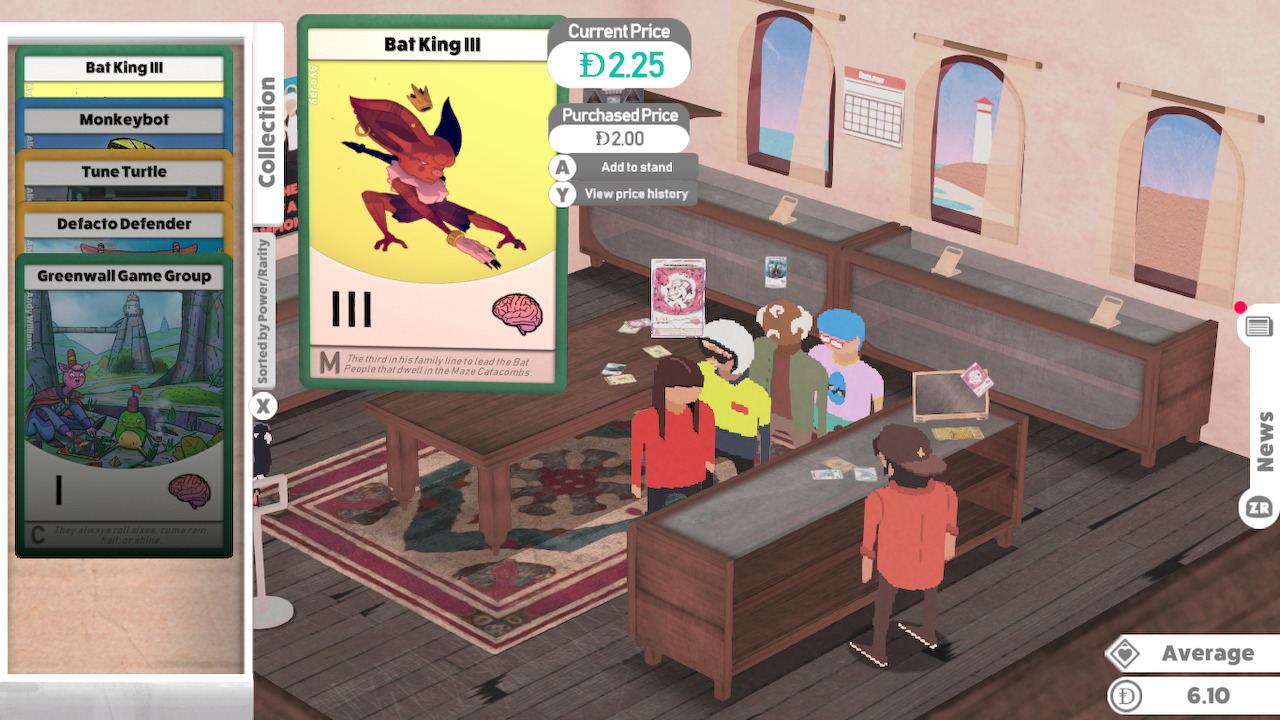 I think one of the more enjoyable aspects of simulation games is the way that they can be broken and exploited, and through careful adherence to the game’s core economic forecasts and mechanics, Kardboard Kings is a game in which success is easily obtained. However, it doesn’t allow the player to spiral its gameplay loop into the extremes that many other simulation titles tend to offer. There’s silly details in the writing and some systems, such as the church condemning the satanic nature of certain cards, but these occur too often to be delightful surprises. Simply put, it is a slice of life simulation with extremely cozy aesthetics, and if that’s the sort of laid back game concept you can get behind, it is well-worth a look.

While the actual card battling element of the game was a greater draw than the simulation elements for me, I still think that both gameplay modes and the simulation’s difficulty options do offer a great deal of content. If you’re looking for something more compelling in terms of narrative or mechanical depth, however, you’ll likely find that Kardboard Kings is very much a one-trick pony. It has nice cards that, if ever printed in physical form, might actually end up costing the absurdly high amounts they fetch in-game… but it doesn’t have much else.