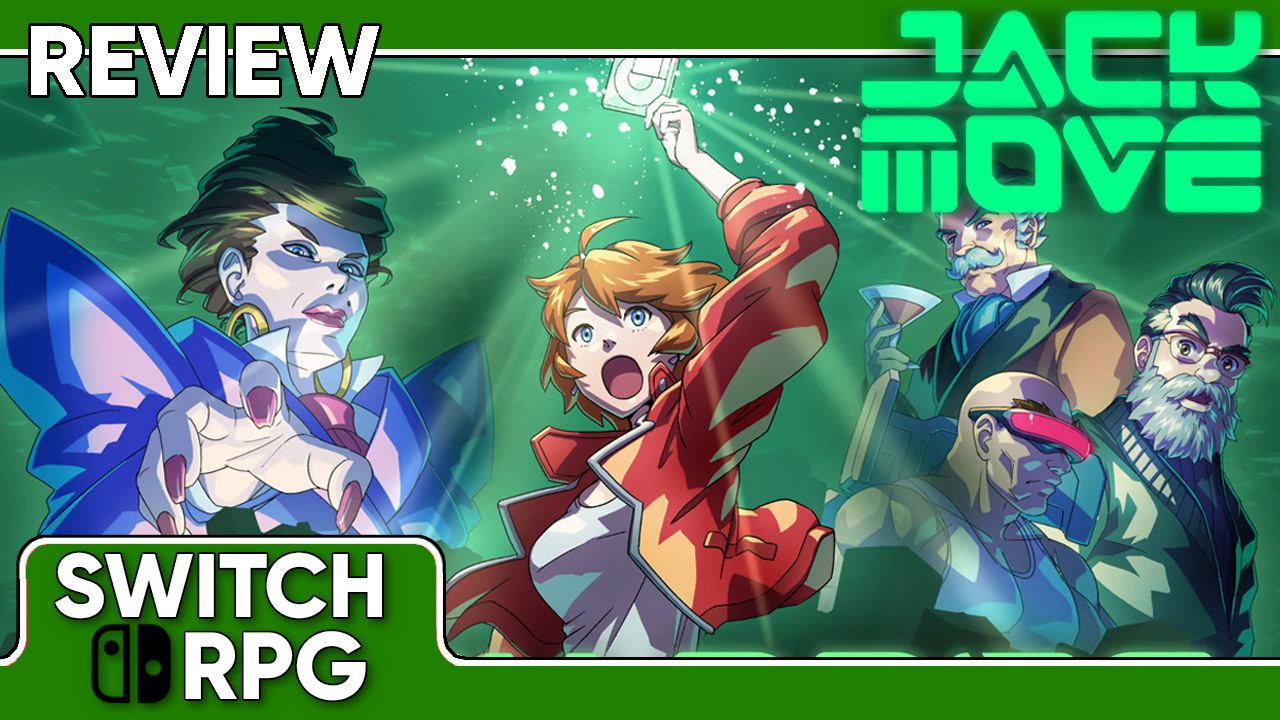 The Cyberpunk RPG has become a common occurrence on the Switch, with the Switch receiving the Shadowrun Trilogy, narrative-focused GameDec, and visual feat Anno: Mutationem in this past year alone. There’s an inherent appeal to being a roguish cyberspace hacker, and many developers are keen to envision what a dystopian future might offer, either via aesthetics or gameplay. The folks over at Hypetrain Digital have teamed with developer So Romantic to offer yet another cyberpunk-styled release for the Switch in the form of Jack Move. Is this foray into cyberspace-centric turn-based combat worth a look in comparison with the multitude of similarly-styled releases out this year? Read on and find out.

In Bright Town, Noa Solares teams with her wheelchair-bound strategic planner Ryder to eke out a living and occasionally stick it to the man. You’ll control Noa as she navigates a densely-packed overworld in order to advance the narrative, solve domestic affairs, and hunt down valuable loot. The field is littered with NPCs willing to share their qualms with Noa, which she can add to a log of requests and complete throughout the campaign. Each residential, or safe area is often bridged by a more hostile environment where Noa will have to solve simple environmental puzzles and battle enemies in order to progress. These puzzles never amount to anything more than flipping switches in the right combination, and are broken up by a telegraphed, albeit random encounter battle system. 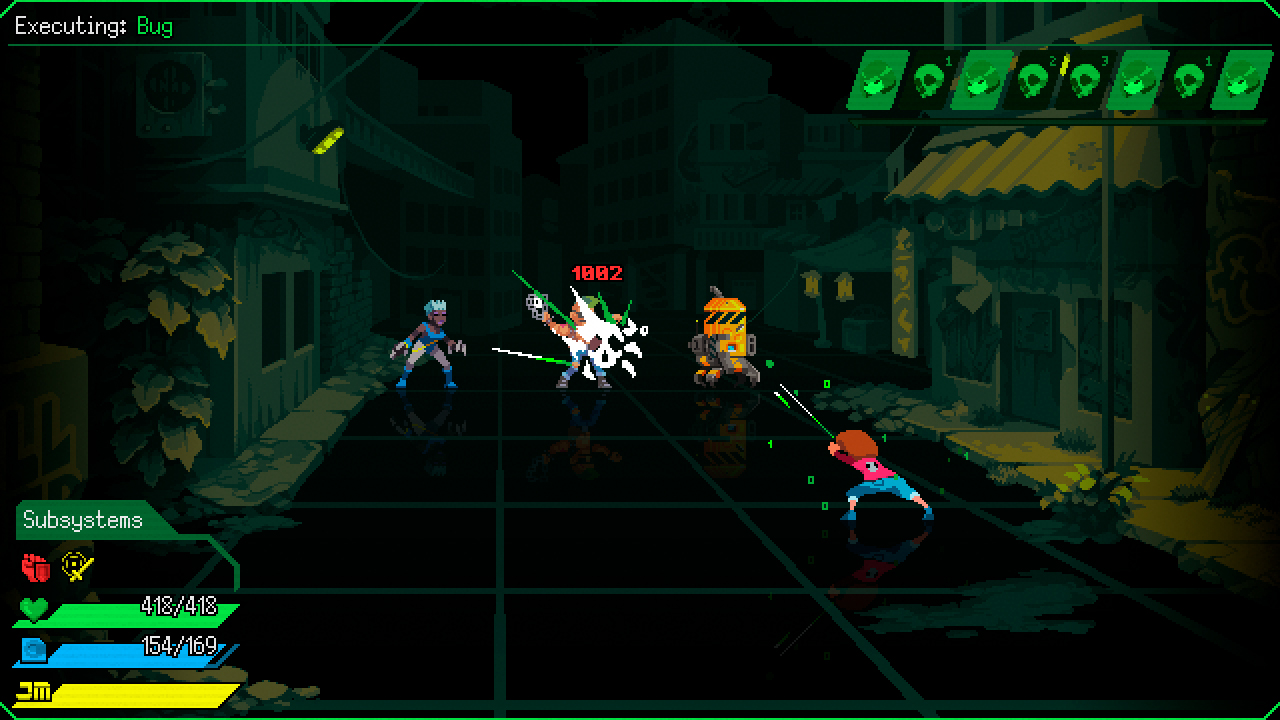 Noa is the only character you’ll control during combat, and despite the variety of tools you’ll be able to purchase, her range of options is somewhat limited. Luckily, the player can utilize the cache command to defend and delay their turn for longer preparation work, which can be accomplished using the install command. Noa can switch out her current lineup of software skills with any other purchased software in order to accurately target enemy weaknesses. While it’s rare that environments and their enemy layouts require the player to frequently switch between software, this does mean you never truly feel unprepared for combat. Upon building a limit-gauge-alike called the Jack Meter, you can execute Jack Moves, powerful attacks that cost no drive points (the game’s mana equivalent) and target all enemies.

Defeating enemies grants cash and experience, and the amount of damage and usage that a certain skill receives will increase its own experience level, with each offensive skill having three levels. Although their cost never decreases, their damage does raise significantly with each level. Noa’s software list requires RAM, which can either be directly influenced via the game’s hardware equipment system or purchased in expansions. Although there are multiple hardware-oriented RAM expansions, the overall amount caps at sixteen slots, regardless of how much more you attempt to add-on. This means that possessing a full range of software spell types can be difficult, as each costs at least two slots or more to add. Of course, running a certain set of reliable software as your traverse environments is advised, but you may find the occasional enemy type who will need a specific skill, which is the justification for the install feature.

There are plenty of games out there that rely on their aesthetics to stand out, and having previously reviewed the stunning Anno: Mutationem, I wasn’t expecting to be blown away by any independent developer’s artistic choices so soon after. However, Jack Move offers a self-labeled “hi-bit” art style that offers yet another banquet of visual delights. Though the environments were built with 3D tools, their textures are meant to match the resolution and fidelity of the character sprites, and the overhead camera is locked in a top-down position in order to achieve a traditional RPG perspective.

The character sprites are vivid and distinct both in and out of battle, with the cyberspace-focused combat phase offering more fantastic depictions of enemy types and incredible combat animations and effects. The amount of detail and richness to be found in the expressive animations is truly something to behold, even if enemies only have a limited number of unique attack types. The amount of variety throughout the entire spectrum of enemies means that you may get a few repeat animations here and there, but it doesn’t detract from the clear passion and effort used to illustrate the world. 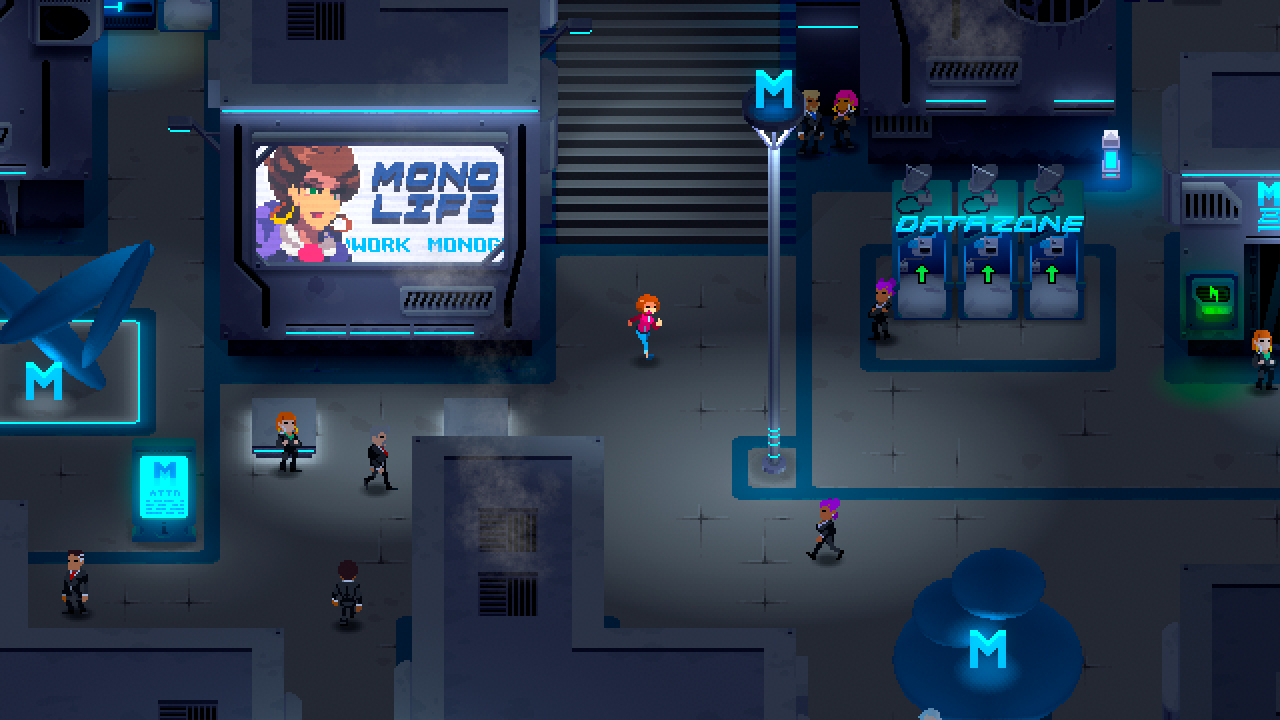 The music is synth-focused with a mixture of electronic and bit-style instruments, resulting in a sound that fits the setting and sprite work, but doesn’t elevate itself beyond being admittedly-effective video game music. The boss battle theme in particular is quite a bop, though I do wish there were more tracks on its level. The sound design for attacks is similarly chippy and chunky, selling the weight of the impressively fluid animations very well.

Tying the whole experience together is a sharply-composed narrative that moves along briskly and leans into world-building via cyberpunk slang and science-fiction pondering. A prevalent theme throughout Jack Move is that of characters dealing with loss, and the ways characters cope as well as react to others is expanded upon through a number of narrative beats. Of course, this factors into the central conflict of the story, but it manifests in both very human and technological ways. The humans in Jack Move are far from perfect, Noa herself being a deeply flawed individual who makes a number of questionable choices. However, she doesn’t claim to be perfect, and undergoes an arc that clearly defines her priorities and feels natural. The script is bolstered by a number of comedic moments and quips that land earnestly enough to avoid feeling tedious, and there are several lore-dump CPUs scattered around the world that help fill in the alternate history that leads to Jack Move‘s world.

In writing this review, I hope to be as economic and expedient as the game itself with getting to the point. Jack Move’s entire campaign clocks in under ten hours, and in a genre filled with bloated titles, that’s hardly a bad thing. There’s little to no busywork here, with side tasks and objectives that allow for a thorough combing of the game’s environments, but a very steady forward momentum in terms of narrative and new locations. Every room you find is essential, and I cannot think of an instance where a hostile environment was circuitous enough to feel tedious.

Unfortunately, this doesn’t forgive the simple nature of many of the game’s environmental puzzles. While all are established within the context of their environment, many exist simply as something to do in-between enemy encounters and don’t require complex thought. One can even use the game’s very liberal encounter modification system to slash or null enemy encounters entirely in order to focus on exploration. Though the game does warn the player that they will likely end up under-leveled for boss encounters, it can just as easily be cranked up to its hype setting for a quick grind, resulting in a very player-friendly experience. While this is all well and good, it also doesn’t mitigate the simplicity of the combat system, which doesn’t offer enough in enemy variety to feel expansive. 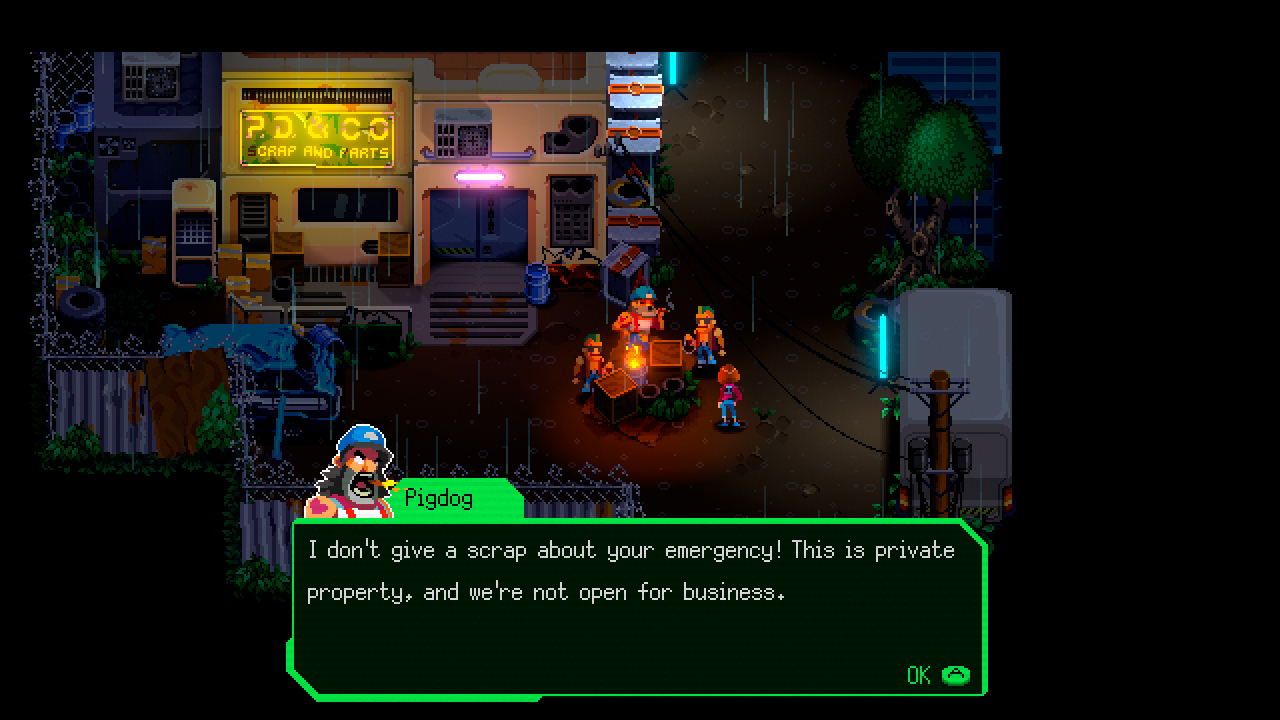 Most encounters boil down to dishing out as much damage as possible at a fast pace, and the game’s color-coded enemies often reveal their weaknesses without necessitating the codex software or hardware options. In the rare circumstance where an enemy doesn’t have obvious weaknesses, the variety of software- which is displayed in shops from the start of the game, revealing the entirety of its tricks in its early hours- doesn’t really offer anything substantive. Sure, you can stop enemies from casting spells, or put them to sleep, or poison them, or weaken their resistance to a spell type, but when the game leans so heavily on the quick pacing of its turns and its single-character party system, any sort of setup that doesn’t result in consistent damage feels like a risky turn.

The game is forgiving with its combat, allowing players to resume from autosaves after each encounter for only a sliver of experience, but it was rare that I felt I needed to change up my strategy, or that the game required anything different from me, save for perhaps the last two bosses, which cap the game in a satisfying, but predictable fashion. When there aren’t a great number of mechanical twists and turns to be found throughout the playthrough, you don’t really expect a huge twist at the end. In a perfect world, some of its enemy encounters would require a more robust collection of software to handle, as you don’t really need to invest in the entirety of the game’s software or hardware inventories.

Still, there’s a good game to be found in Jack Move. A nice boss encounter or two forces a little bit of trial-and-error in order to solve their puzzles, a meta binary translation can help the player bypass the endgame dungeon puzzle, and as mentioned before, the story is efficiently told and beautifully illustrated. It’s actually quite satisfying to see a game so focused in scope and vision. If Jack Move padded out its environments just a bit more or reused its enemy types a few more times, it might cross the line of feeling enjoyable. A few graphical glitches and a software crash occurred in the final dungeon, but were easily forgiven thanks to the frequency of autosaves. If you’re looking for a short RPG that has great quality of life features and a nice neat narrative, Jack Move is an easy pick, especially with such striking visuals. But if you’re looking for something meaty, you may have to cast your net in a higher price range.