Is It Wrong to Try to Pick Up Girls in a Dungeon? Familia Myth Infinite Combate Review (Switch) 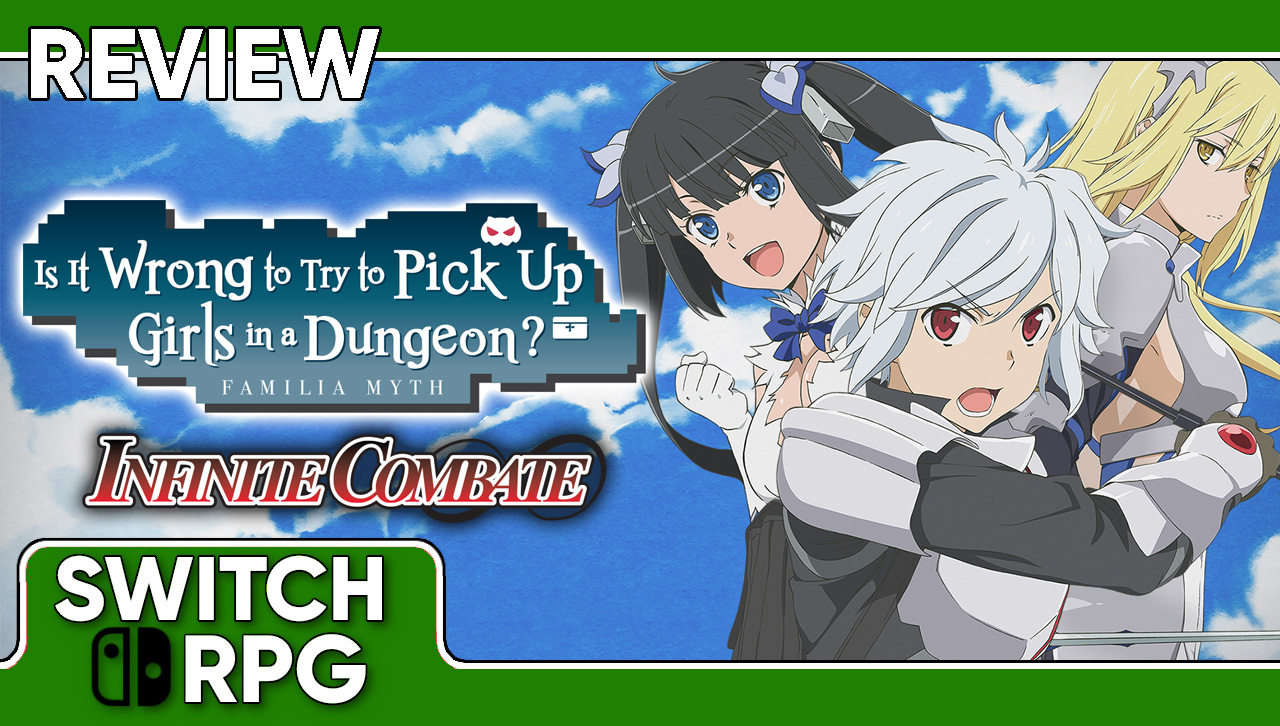 Anime fans likely remember a time not so long ago where we had to jump through some ludicrous hoops just to play games based on our favorite anime franchises. I still have my SNES that I painstakingly modified by hand in order to play an import copy of Dragonball Z: Hyper Dimension. Luckily, times have changed and the Switch has become home for heavy hitting anime-based games, such as Fairy Tale and Dragonball Xenoverse 2. It also has brought some relatively obscure ones more into the limelight, like Re:Zero and this surprisingly addictive (but ultimately flawed) action RPG. 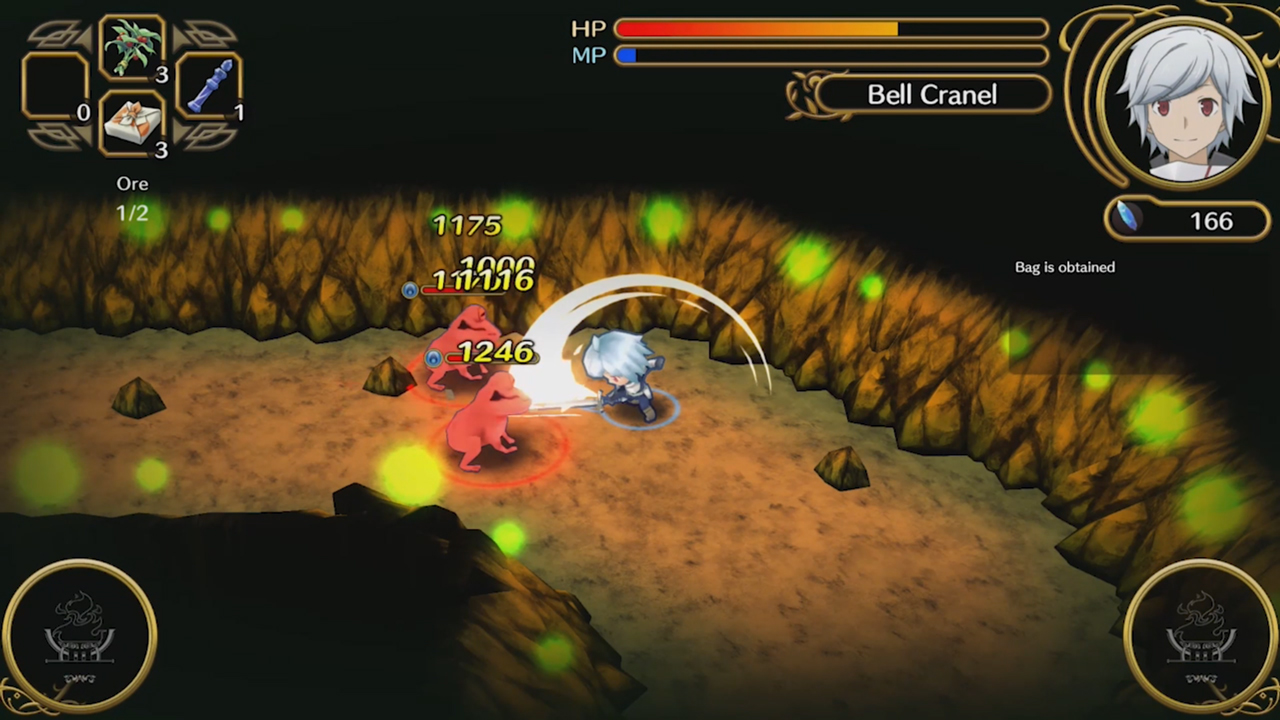 Let’s get the worst part of the game out of the way. Frankly speaking, Infinite Combate plays as if it just stepped out of an alternate timeline where the DS is still the top standard for handheld games. The premise here is to TRUDGE protagonists Bell or Ais through short dungeon missions while checking off the necessary goals to advance the story. Please note the emphasis on “trudge” – combat is incredibly clunky here, and clunky combat doesn’t mix very well with action RPGs. There is a noticeable delay between the press of the button and the execution of an attack. This would’ve been much more of a nuisance if combat had any depth and required skill. Fortunately(?), simple attacks are enough to dispatch most foes, with the exception of the game’s toughest bosses.

One interesting nuance to Infinite Combate is the ability to play as Ais and see parts of the story unveiled through her perspective. This should be a real draw for fans of the anime source material. More on that later, but it’s important to note that both Bell and Ais are capable of casting a spell. It was very cool to be able to cast the spells that look so epic in the anime. However, the actual casting of the spell is yet another painstakingly slow process in a combat system that is already encumbered by a slow pacing. Due to this, I found it unnecessary to bother with spellcasting while battling basic foes. Most bosses still required the extra firepower of a spell to take them down, however. 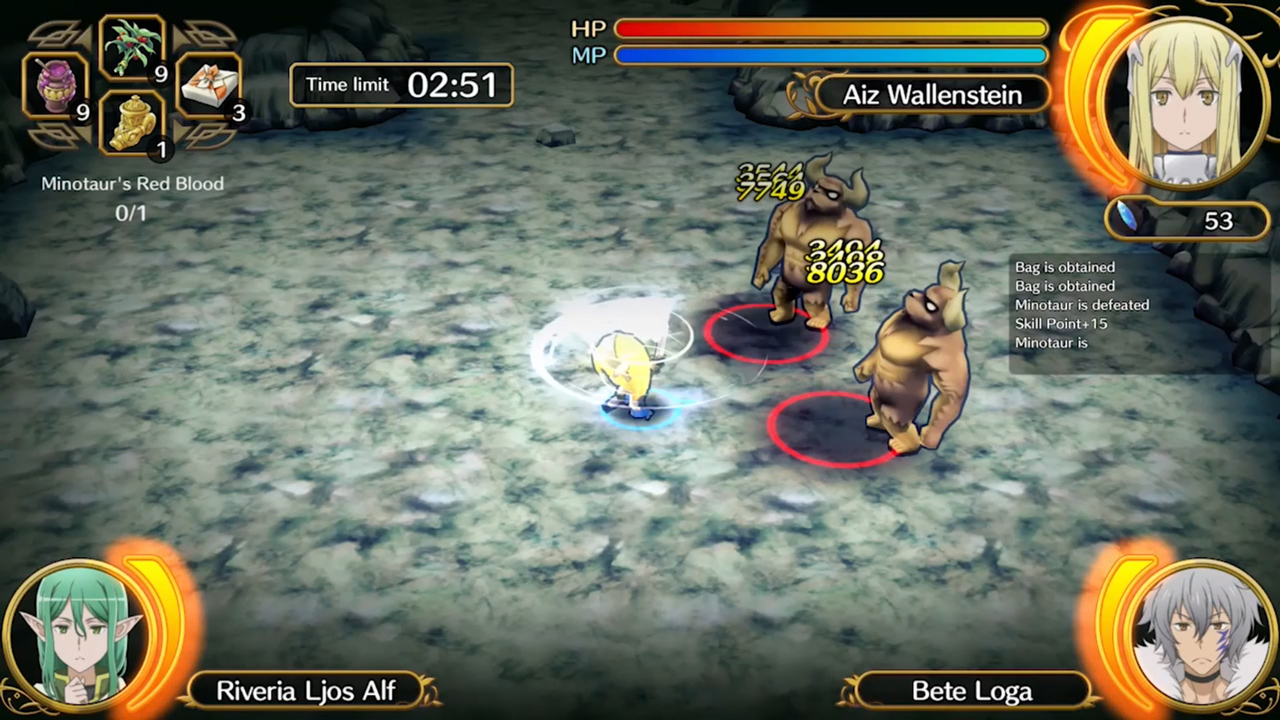 Infinite Combate is admittedly off to a pretty terrible start, but is the rest of the content worth it? Well, if you’re like me and enjoy the story progression and the extra canon provided by the game enough to make it through the main story arc, you’ll be rewarded with a brand new gameplay mechanic that holds true to the title of the game and anime. Who doesn’t love a good dating sim mixed in with their action RPGs?! Progressing through the story unlocks new missions to play through in the labyrinth town of Orario. Completing these missions while meeting certain criteria will allow Bell to begin to add up “intimacy points” with certain other characters. Once Bell reaches a certain level of intimacy, he can go on a date with other female characters or even “sleep with” them. I should clarify that “sleeping with” other characters is just that. You’ll be treated with some extra dialogue between Bell and the female character and then they’ll fall asleep together. Sweet, right?

Although these scenes will add a layer of fanservice (if you enjoy seeing scantily clad anime girls), they also provide some really interesting world building moments that simply aren’t available in the anime itself. This is what made this romancing mechanic the most interesting and addictive aspect of the game in my opinion. It’s also cool to acknowledge that completing the main story gives the player the opportunity to actually find out “Is it Wrong to Try to Pick Up Girls In a Dungeon”? 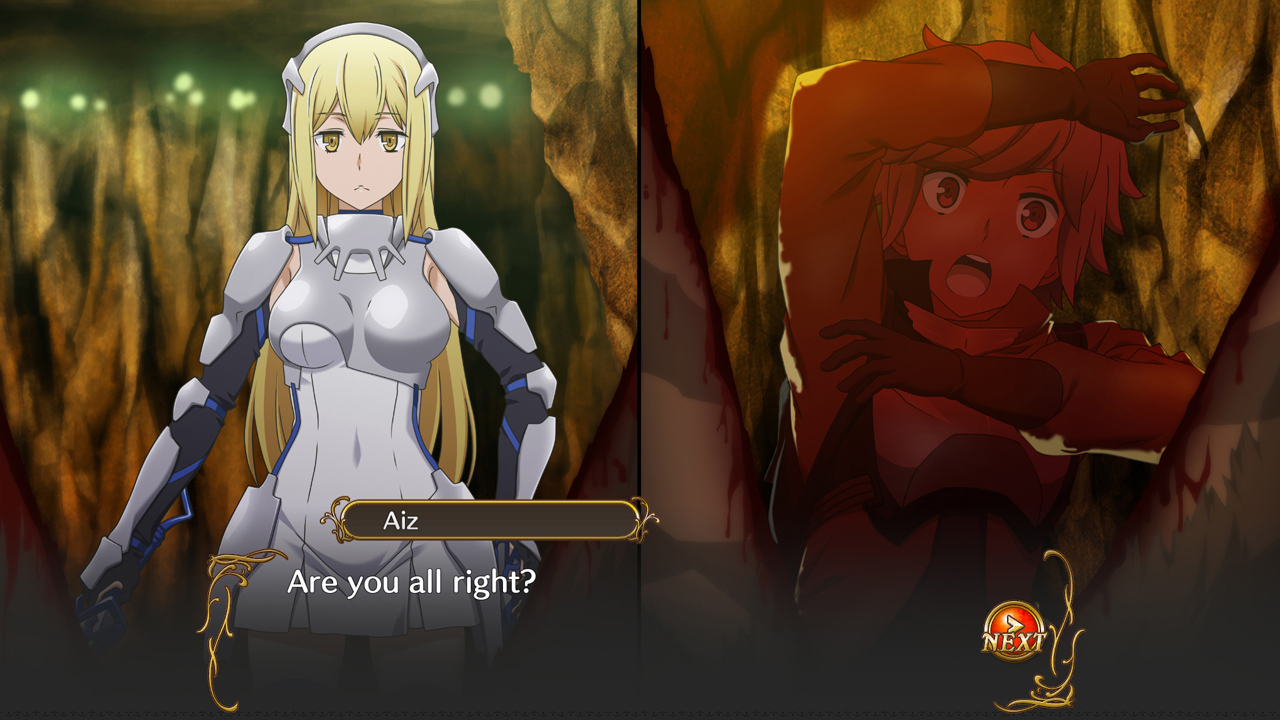 Young adventurer Bell shares a goal that many anime protagonists before him have shared – he simply wants to be stronger. In the world of Orario, goddesses have chosen to come down from their heavenly abodes and help the adventurers accomplish their goals. The goddesses set up guild-like groups called “familias.” It is virtually impossible to battle in the magical dungeons without having joined a familia and having the support of a goddess. Young Bell is perceived as a weakling from the start and therefore isn’t invited to join a familia, until the goddess Hestia takes a strong liking to Bell and chooses to make him the first and only member of the Hestia familia.

Having joined a familia, Bell sets out to become stronger. He has a very rough go of it as he encounters a magical Minotaur that is at a much higher level than him. Right around this point of the story, control will switch over to Ais. Ais a beautiful young swordswoman and an expert at combat. Without spoiling too much, we discover that Ais is responsible for the release of the Minotaur on the lower levels of the dungeon and therefore feels obligated to save Bell. Instances like these can be found throughout Infinite Combate. Seeing the story from different perspectives than the source material was a brilliant idea from Mages (the development team). Making use of the mechanic, the story continues through the events of season 1 of the anime, adding lore, and expounding on character relationships even deeper than the anime itself. The story is truly an engrossing experience and carries the game through some of its many shortcomings. 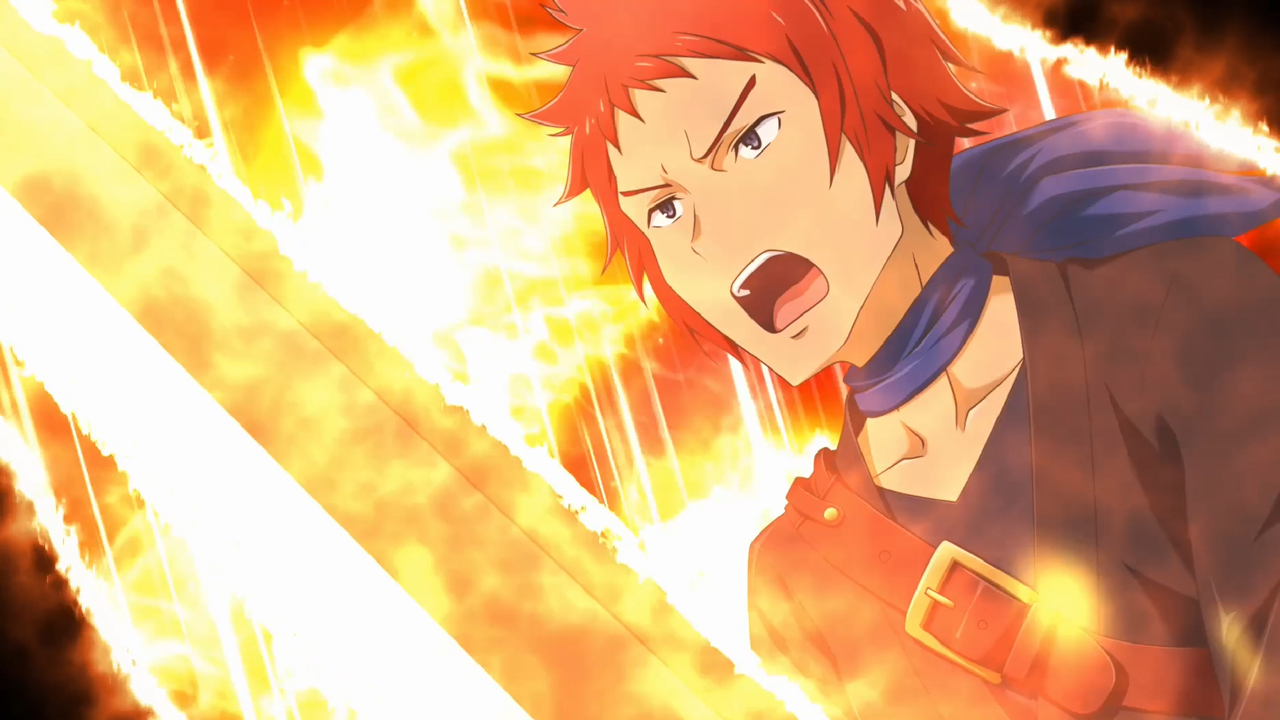 Speaking of those shortcomings, half of the visuals in Infinite Combate are woefully disappointing. In a head scratching move, Mages chose to incorporate two entirely different visual styles into the game. The aforementioned DS era performance in combat is precisely the same in the graphics department. The chibi style character sprites would fit in well in one of the DS’s most impressive graphical titles, such as FFIII or FFIV. That’s bad news for a Switch game, though, and it makes Infinite Combate seem rushed from this perspective.

On the other hand, Infinite Combate also sports beautiful, hand drawn stills during cutscenes that look so good that they may very well pass as scenes from the anime itself. The vibrantly colored, unique characters really jump off the screen during these scenes so it really makes me wish the development team had chosen this aesthetic for the entire game – even if it meant a little extra waiting on our end. We anime fans are accustomed to waiting, anyway.

The repetitive soundtrack doesn’t offer much of a saving grace from the poor half of the aesthetic presentation. The songs here are fair, but there just aren’t many songs overall. The original Japanese voice cast is present and they do a very respectable job, though I prefer the English cast personally. 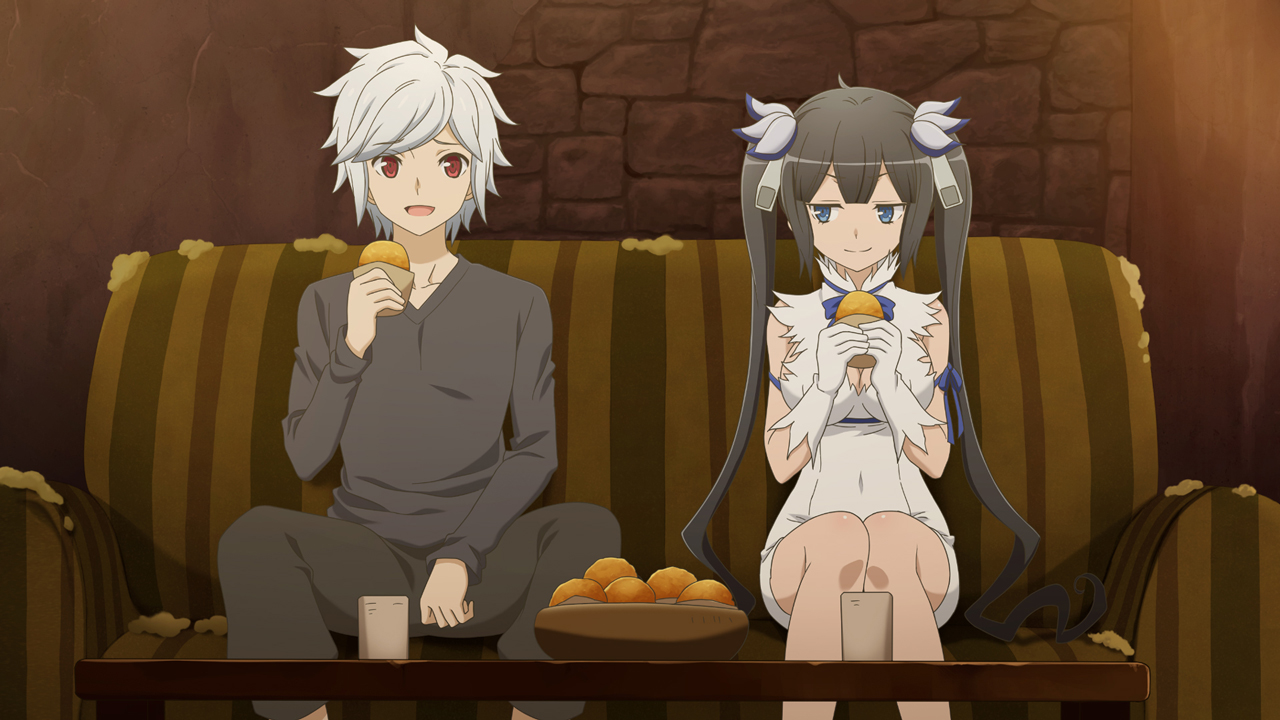 Infinite Combate has been tough to rate. Like most anime games, fans of the source material will be more partial to enjoying it. Having said that, I believe Infinite Combate does have a stellar story that the average RPG lover would enjoy whether they’ve watched the anime or not.The fun of experiencing Orario through Ais’s perspective and the post story content that includes the romancing simulation adds an extra layer of fun and replayability that makes this my favorite anime-based RPG of the year. However, it’s impossible to ignore the clunky combat and extremely aged visuals shown alongside it.

I have an urge to rate Infinite Combate as “good,” but its hefty price tag of $34.99 is what ultimately solidifies its place in the lower tier. Fans of the anime (like me) will enjoy this game for the expansion of the show that it is. So, I wholeheartedly recommend this to anyone and everyone that enjoys the source material – the romancing simulation alone is a strong sales point for that crowd. I just wish the mechanic was available to enjoy without having to complete the main story first. While fans of the anime may love the title, I’m afraid the common RPG lover will only see a clunky action RPG with dated visuals, and a story that manages to do just enough to pull the game along.

Tags: Is It Wrong To Try To Pick Up Girls In A Dungeon?MAGES.Qubic Games