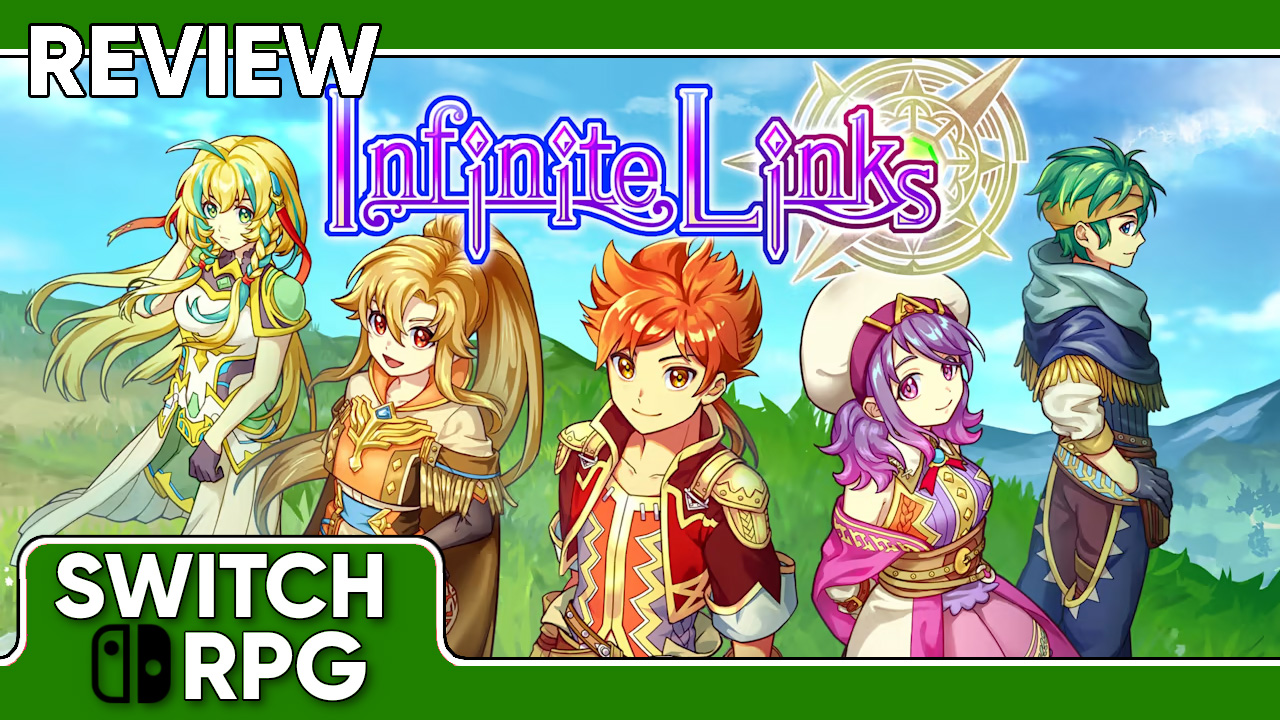 Whatever your thoughts may be on KEMCO and its myriad of RPG releases each year, there’s no denying that every now and then, one of these budget RPGs really hits a home run. KEMCO and its partners are notorious for their prolificity, which results in a varied level of quality from game to game. Some end up being gems, others are just atrocious, and still others – perhaps the majority – end up just being forgettable.

Infinite Links, the latest from KEMCO partner EXE Create, is the latest release for the Nintendo Switch. Like other EXE Create RPGs, it strives to do justice to the genre within the limitations of its engine and short development time. To truly judge which category of KEMCO game it is – good, bad, or mediocre – we need to march through the game’s various elements and see what they do to set themselves apart from the glut of budget RPGs available on the Switch. 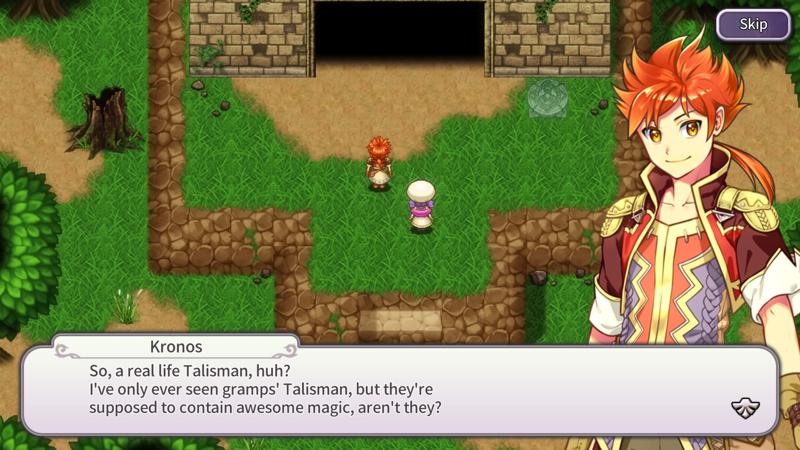 The core story of Infinite Links focuses on the talismans, ancient, magical artifacts that can imbue their wielder’s with magical abilities. In centuries past, wars were fought over control of these talismans, with a particularly foul evil eventually threatening to destroy the world. A powerful sage sacrificed himself to seal away this nemesis, and in the present day, the sage has become something of a subject of worship and reverence. The nations of the game’s modern era live in a tentative peace, with small conflicts still breaking out whenever sources of powerful talismans are discovered. In addition, monsters (here called “Evils”) still roam the land, and as the story begins, Evil attacks are on the rise.

The central plot of the game revolves around Kronos, an up-and-coming adventurer who wants to protect people from the Evils. When Kronos’s adoptive grandfather is slain and his sister is infected with dark magic, he sets out to defeat the one responsible and prevent his sister from being turned into an Evil herself. His quest takes him on a journey across the world, interacting with kings, commoners, talisman researchers, and dastardly enemies. If this all sounds terribly unoriginal, that’s because it is. Infinite Links‘ plot never veers too far in any creative direction, playing itself extremely safe for most of its runtime.

Unfortunately, the game’s main characters do little to make up for this rather tame narrative framework. Four of the five main party members you recruit suffer from what I’d call “generic protagonist syndrome,” possessing some superficial traits that set them apart, but ultimately all living with the same moral framework with little interpersonal conflict. What conflicts do arise are mostly superficial, or else are resolved quickly and predictably. The game gets a bit of an uptick when you recruit your final core party member, a “living talisman” who acts as sort of a robot companion, but the game fails to properly capitalize on the kinds of conflicts that may arise from their presence. As I played through the story, boredom was my most frequent emotion. 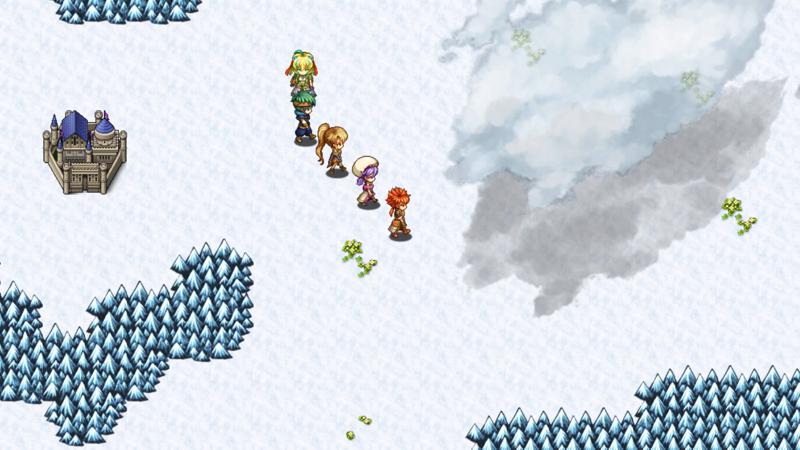 One look at Infinite Links will immediately remind you of a myriad of other games in the EXE Create lexicon. All the same assets from their standard game engine are here, along with the random added sprite and tileset to keep things fresh from game to game. If you follow the lineage of games that came before Infinite Links, you will certainly see a gradual improvement of these assets, as frame rates get more consistent, map layout and ornamentation gets more varied and realistic, and the general cleanliness of the whole experience improves. That being said, Infinite Links does little to set itself apart visually from the majority of other recent EXE Create RPGs. The best thing that can be said for the game, visually, is that the menu system has been improved substantially, being easier to navigate and easier on the eyes. Overall, this visual style is passable – but leaves a lot to be desired.

The most notable weakness that never seems to improve across multiple EXE Create titles is the character animations. Sprites come in a set number of shapes, which get reskinned from game to game, but never feel different or innovative. Infinite Links attempts to add a bit of variety from the standard medieval fare by making one character cowboy themed and another techno-organic, but it does little to make up for the lack of expressiveness across the board. These sprites do not emote. At all. The best the developers can manage is to make them hop, jump, scuttle, or fall down – but never do they reach even the low bar set by early SNES sprites. They can’t laugh, cry, smirk, or even look up or down. It leaves the game’s rather dry dialogue to make up the difference, but to little effect.

Audio quality also follows the standard trend of EXE Create games, namely: the game has banger tracks – particularly the main battle theme – but not much in the way of musical variety. You will certainly find some song sticking in your head and coming back to haunt you (in a good way) even after you’ve put the game down. Other audio features, from menu selections to attack sound effects, are all safely mediocre and do little to enhance the experience. 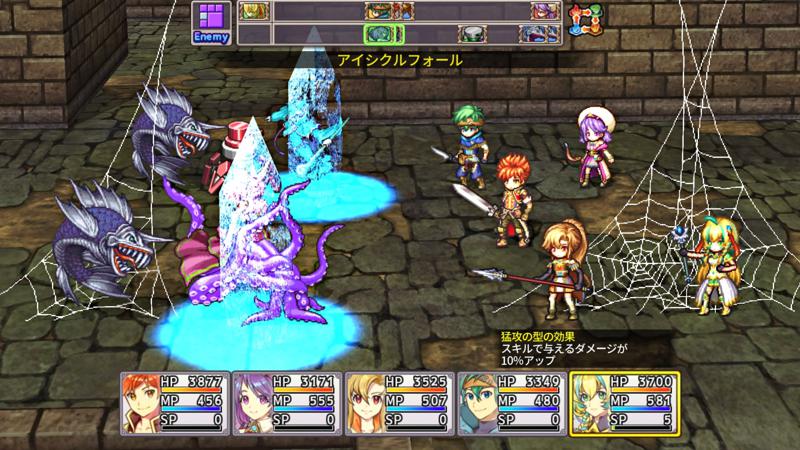 When combat does come, that banger battle theme will play over EXE Create’s tried and true combat system. Both parties will line up in a 3×3 grid, making attacks that may affect different shapes on their opponents grid. Each character comes with a set of standard abilities unique to them, usually themed around a certain standard RPG class. You’ve got a warrior, a thief, a mage, etc. In addition, all characters may equip talismans – themselves set to a 3×3 skill grid in the main menu. Talisman skills come in four elemental varieties, with each character having a main and secondary affinity for each class. Lining up three abilities in a row will allow you to use powerful “combo” attacks, though only after you’ve filled a gauge during a prolonged battle (i.e. boss fights). In addition, some slots on each character’s grid will apply additional upgrades to the slotted skill or to the character’s stats as a whole. This whole skill grid system, while interesting in concept, fails a bit in execution. With only nine slots per character, your choices are limited, meaning you’ll mostly find yourself using the same skills over and over again. Giving yourself a creative or unique build is pretty much out the window.

Overall, the combat system is mediocre at best. It lacks the level of customization available in other EXE Creates titles, and offers nothing interesting in return. The game attempts to add a bit of variety by adding hazards to some battles (spikes on particular floor tiles, sticky webs, etc.) but this system generally ends up being more of an annoyance than anything. Add onto this the ready availability of autobattle and a slightly overtuned experience curve, and you’ll mostly find yourself grinding out the same battles over and over on auto – a pitfall that just kills the fun factor of the whole game. Most battles end quickly, and those that don’t just turn into wearing down an HP sponge while keeping yourself healed. 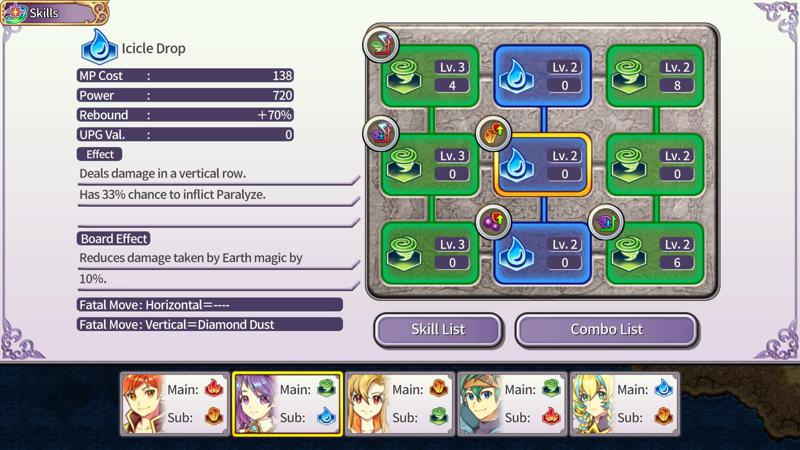 In an attempt to add more meat to the game, Infinite Links includes a variety of other systems which are (and I’m starting to sound like I’m beating a dead horse) standards for other games in the lexicon. You’ve got a weapon and skill crafting system, which mostly just boils down to combining +1, +2, +3, etc. benefits on individual weapons onto whatever your most powerful base weapon is at the time. You have an arena that is available from the early game that gives you some nice rewards here and there. You also have bonus item shops available in the main menu, a vestigial element of the game’s mobile roots. Each battle awards gems and/or tickets to use in a gacha-style shop for modest equipment and item rewards, though without some truly unique and/or powerful options, it mostly falls flat.

Probably the best bonus feature in the game is the bestiary, which offers rewards for killing a certain number of each enemy. The bestiary is grouped by region, allowing you to see exactly how many more of each monster you need to defeat before unlocking the next reward. We’ve seen a similar system in other recent EXE Create RPGs – the first I can think of was in Liege Dragon – and it makes for a great incentive to grind. However, as with the game’s experience curve, the catalog seems to be a bit overtuned this time around, forcing you to kill ridiculous numbers of enemies to satisfy all the requirements. This is unfortunate, as such a system could have been the game’s saving grace, but instead falls into the same general malaise as the rest of its construction.

Unfortunately, it seems Infinite Links falls into the “so mediocre it’s mediocre” category of KEMCO titles. Nothing it does is particularly unique or interesting, and most of its systems have been better implemented in other EXE Creates titles. If you are looking for a budget RPG, you have better options within KEMCO’s library (or elsewhere).

It’s not awful. It just fails to live up to its more notable predecessors.