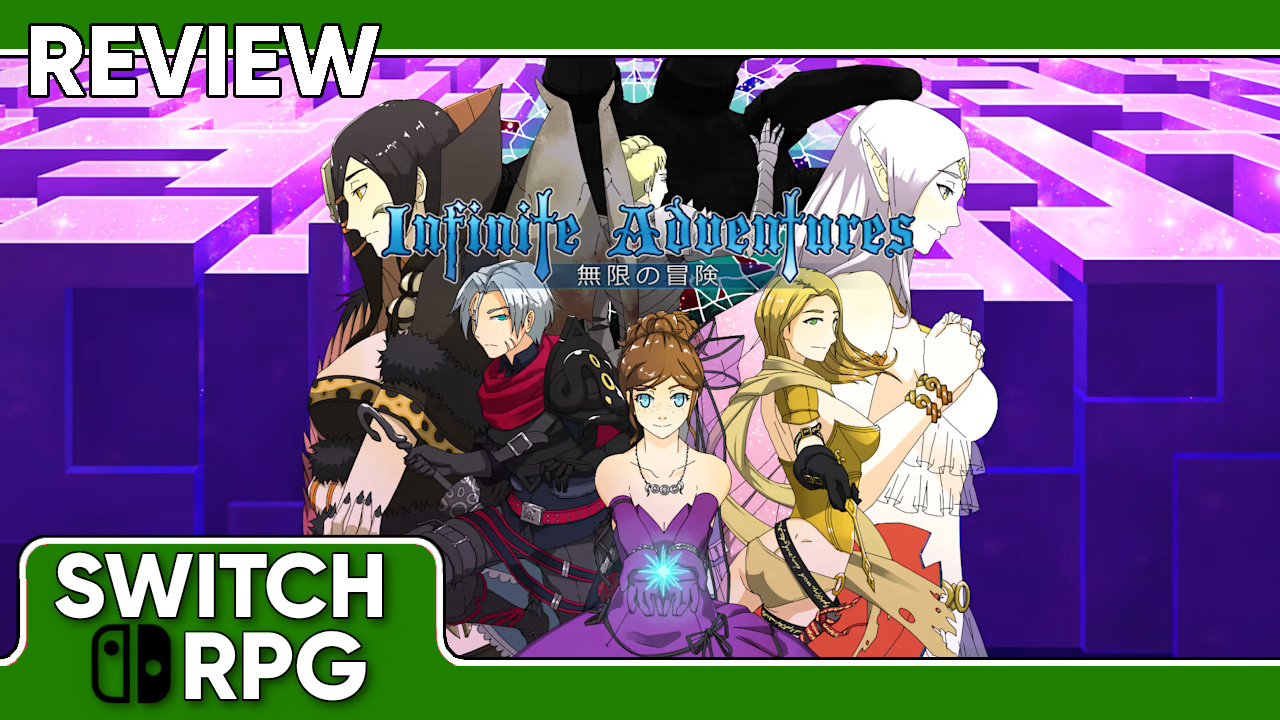 Memories are precious. Whether good or bad, they are a reminder of our journey through life. Some don’t have the luxury of remembrance, however, and that’s certainly the case in the realm of RPG protagonists. But what if the amnesiac hero or heroine was only a mystery to themselves?

What if there were deities that praised their name, dragons that cursed them, and others that begged them to look away and simply build a new life? What sort of aftereffect could reclaiming the past cause? Infinite Adventures is all about this conundrum; an amnesiac and a bottomless labyrinth that – for better or worse – goads them into its depths. 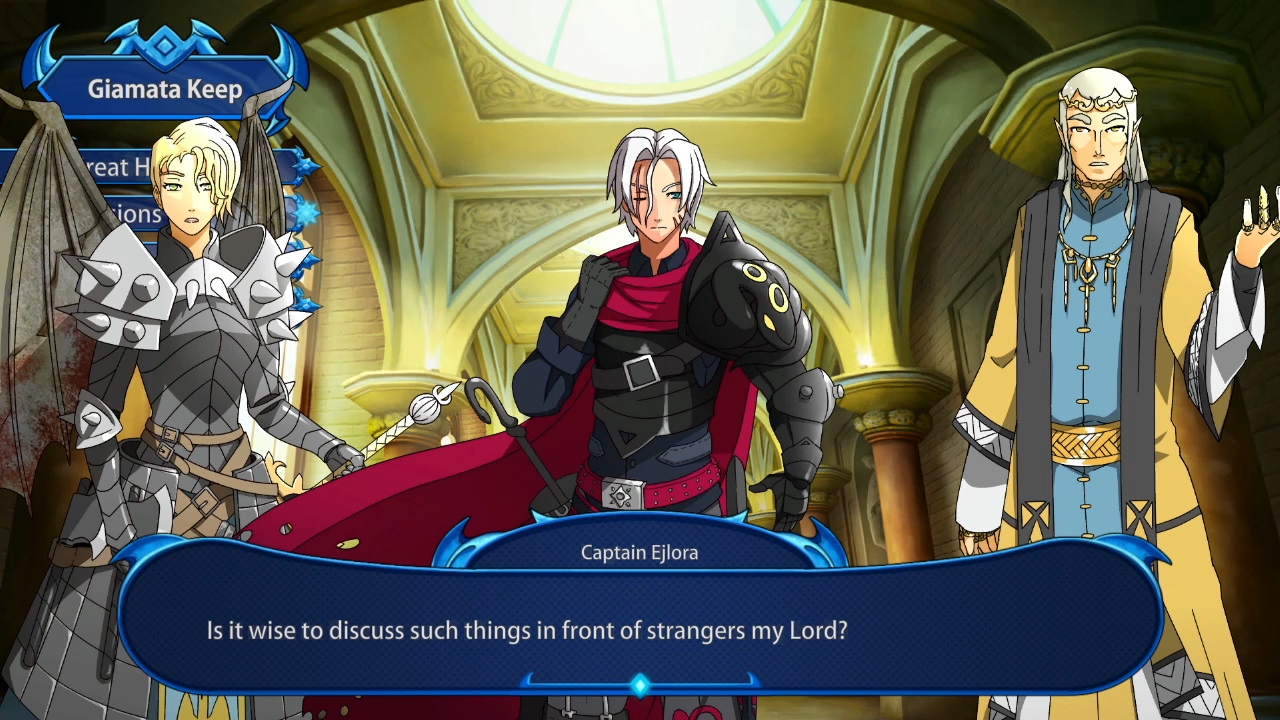 In Infinite Adventures, players fill the shoes of the Traveler, an amnesiac discovered five years prior to the start of the game. Back then, a noble dreamed of a dragon overlooking the town of Giamata, and when they later went to what they thought was the location of the ominous beast, they instead found the Traveler collapsed outside the steps of the labyrinth. The noble took it upon themselves to care for the Traveler, who would eventually wake up from their comatose state five years later. Owing a debt to the noble for saving their life, and wanting to not only answer questions about themselves, but also perhaps the noble’s mysterious dreams, the Traveler musters up a party to brave the depths of the labyrinth.

The world in Infinite Adventures is steeped in lore, but the uneven quality of the voice acting sometimes does more harm than good. The main story itself is a slow burn, but as the Traveler experiences more within the labyrinth, the intrigue grows alongside it. Some of the side quests, also fully voice acted, even have decent stories tied to them that help flesh out key characters and the world as a whole. Even character creation provides some additional lore tidbits pertaining to races, factions, and locations that really help boost that immersion factor even more. While the game is ultimately just another amnesiac protagonist adventure, the execution is handled well.

Infinite Adventures is a turn-based dungeon crawler that has the Traveler and their companions stocking up supplies and conversing with folks in town, before chipping away at the seemingly endless labyrinth located nearby. The party gets main and side quests from around town, then aims to fulfill them and progress the story by exploring what is known as the Infinite Labyrinth.

The “infinite” part is a bit deceptive, however, as the couple dozen dungeon floors that accompany the main campaign are actually handcrafted while the procedurally generated (or “infinite”) renditions are a much smaller subsect of the game (more on that later). On the other hand, there are some narrative discoveries to be made that do technically play into the idea of a genuinely never-ending labyrinth — those will be discovered in due time, though. 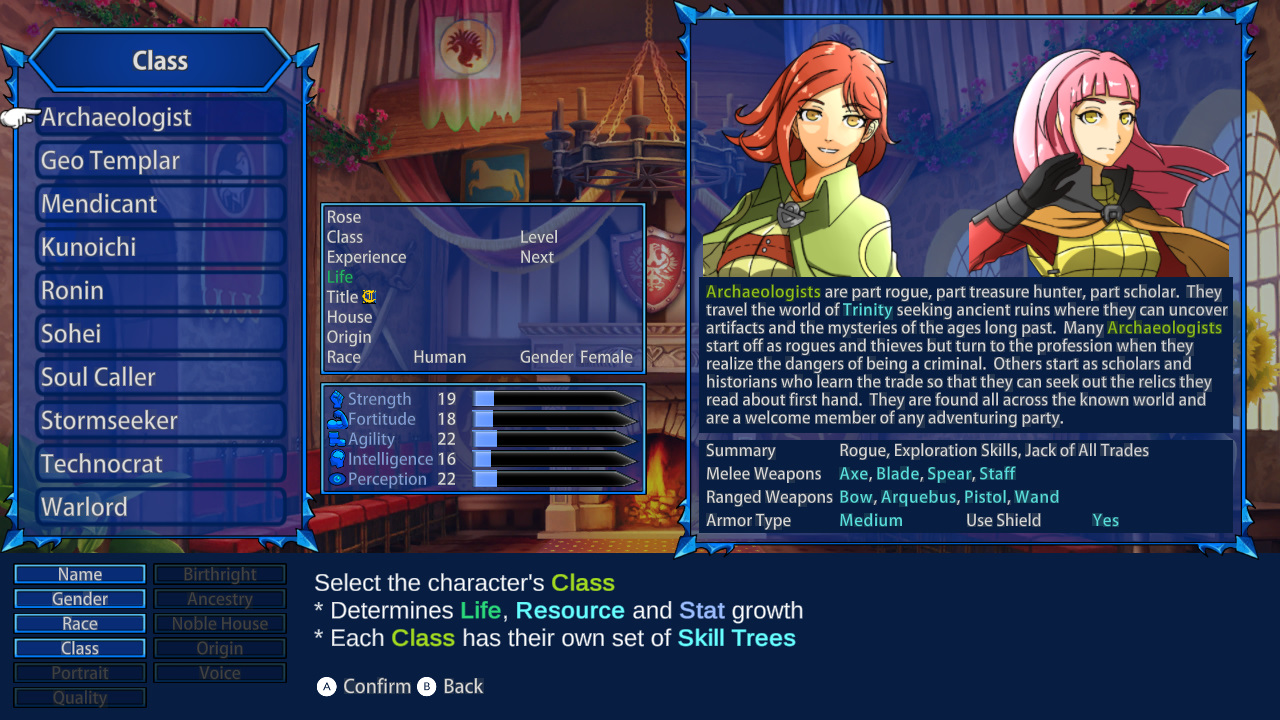 Before jumping into the Infinite Labyrinth, the player must create the primary protagonist – or the Traveler – then go on to either pick from some pre-made characters or create their very own companions to fill out their party. Infinite Adventures features a robust character creation system that has the player selecting a race, class, ancestry, and of course, aesthetics.

While characters will naturally grow stronger as they level up and obtain new gear, the bread and butter of development is through the three diverse skill trees for each class. Characters gain one skill point per level up, which can then be distributed to one of three branching skill trees in order to build out their toolkit. Many games tout skill trees and a “play your own way” tagline, but very few actually follow through with that claim. Fortunately, Infinite Adventures truly allows for meaningful customization and flexibility thanks to multiple VIABLE builds for each class. 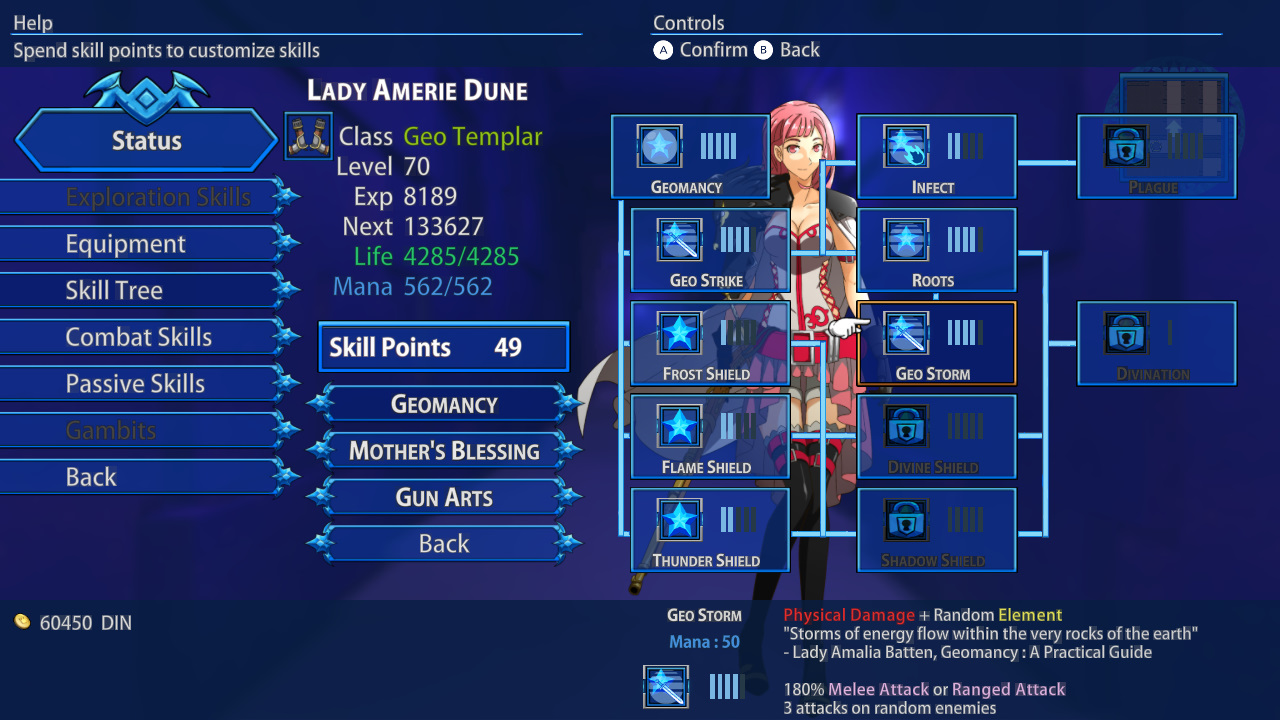 The obligatory Warrior class, Warlord, isn’t pigeonholed into just being a meatshield; a hybrid damage dealer / tank or completely abandoning the iconic sword and shield for two-handed or dual-wielding goodness is completely acceptable. Another example is the Sohei, who has strong magic capabilities but can be equally as useful focusing on shields and spears – it really depends on how you, the player, wants to build them out. Best of all, skill selection isn’t an irreversible process, though resetting them does get increasingly more expensive as the party advances in levels. Overall, Infinite Adventures has one of the better party creation and development systems in a modern dungeon crawler, and the numerous viable skill choices really makes the “play how YOU want to play” adage ring true.

Once the Traveler has formed a party, they will soon brave the depths of the Infinite Labyrinth. Dungeon diving is done from a first-person perspective, and the general ebb and flow is standard subgenre fare: movement is grid-based, and every step helps map out an entire floor. Each dungeon floor is full of enemies, traps to avoid, and treasures to find. There are major incentives for fully mapping out each and every location, one being the materials found at gathering nodes and from enemies which can then be sold in town for both profit and to unlock new tiers of items and equipment. 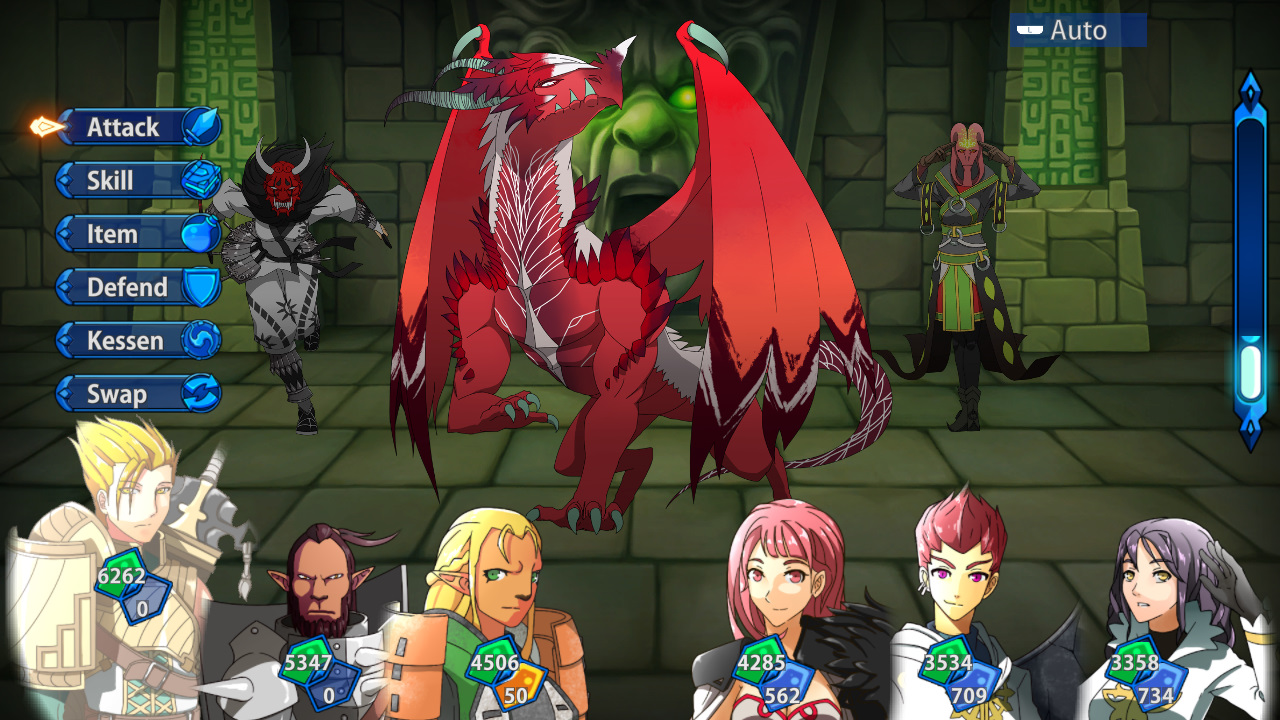 Dungeons can also house false walls and locked doors that can only be found with the proper levels of exploration skills – a massive, but highly rewarding goldsink. On most difficulty levels, Infinite Adventures conveniently allows the player to crank up (or turn off) the encounter rate to aid in either grinding or simply avoiding random encounters entirely. Moreover, completing each floor and moving onto the next one generally opens up a waypoint to that floor for easy access later. Despite featuring several quality-of-life enhancements, Infinite Adventures has oddly omitted an auto-pathing feature that has more or less become a staple in modern dungeon crawlers.

As mentioned earlier, Infinite Adventures features handcrafted maps in the main campaign, but eventually opens up some optional randomly generated ones to explore as well. Were the game to rely on just procedural generation, though, it would not be a good thing. Most of these “infinite” dungeons are nothing more than a million tiny rooms and redundant doors; some spawn as a single, inescapable room that has no use whatsoever! Fortunately, the “infinite” dungeons aren’t mandatory, but can be good EXP and rare resource farming spots.

As the Traveler and their party go ever-deeper into the Infinite Labyrinth, they’ll undoubtedly run into many foul demons and beasts. Battles are turn-based, and actions, for the most part, are dished out based on the speed of each unit. Some classes have access to abilities that will always strike first, and the party at large can opt to empower any ability in exchange for a certain amount of resource of the same name to not only make the ability more potent, but also to give it “first strike” capabilities. 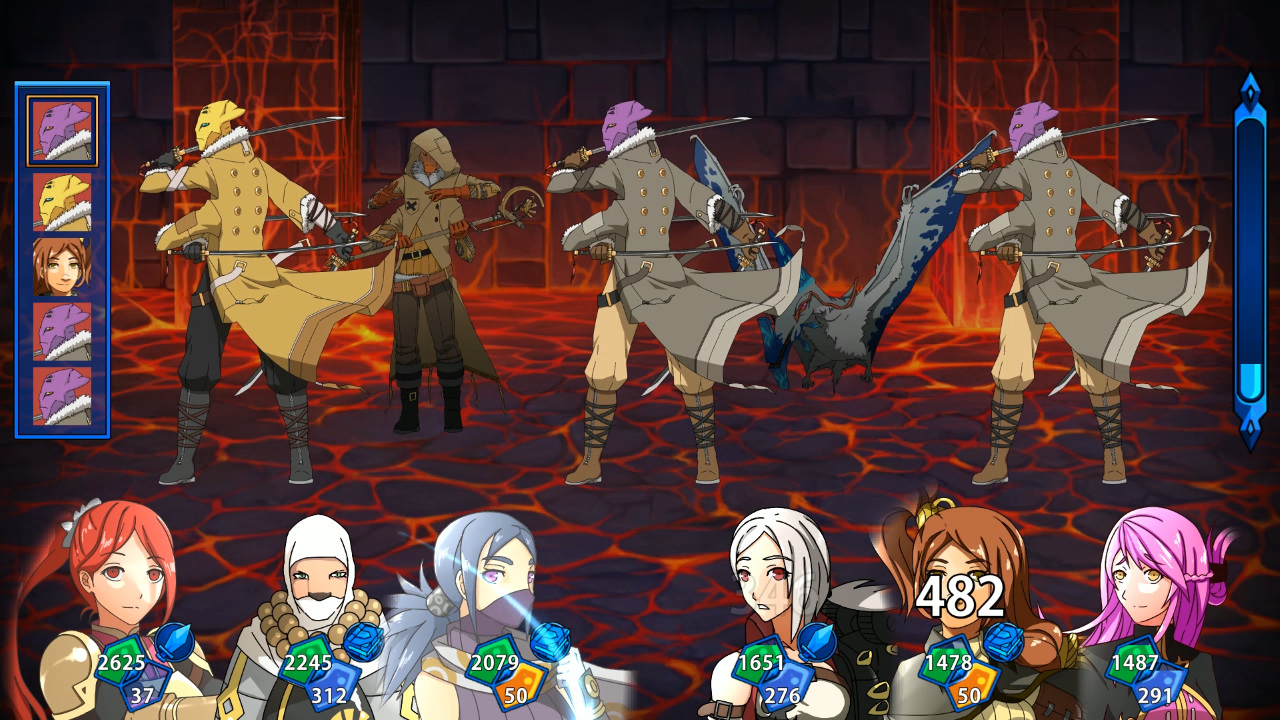 The segmented empower meter will naturally build during combat, which can then be spent on the aforementioned empowered abilities, or can be stocked and used for extremely powerful skills known as Kessen. There are a wide array of Kessen that can be learned and purchased and while they are far more expensive than empowering single abilities, they can be extremely useful in many situations. There’s also a small chance that certain Kessens can be used for free randomly during a fight, or when the enemy is caught off guard by the player (ie. pre-emptive strikes).

The party consists of six characters – three in the front row, and three in the back. The front row is intended for hardy melee characters as they will be targeted the most with single-target attacks. The back row is a bit safer, but can only use melee weapons at 50% efficiency (though ranged weapons and spells are unaffected). This same concept applies to the enemy’s formation, as multiple rows of enemies are possible and melee attacks against them will vary in strength based on the same conditions. Players can also make use of an auto-battle feature, though it’s limited to standard melee attacks which are generally not the ideal way of dispatching large groups of monsters.

In spite of all its aforementioned accolades, Infinite Adventures begins to struggle a bit when it comes to its overall presentation. The hand-drawn portraits are easily the best part, and while the overall quality is certainly lower than many other dungeon crawlers (likely with higher budgets) their variety and stylistic uniformity is commendable nonetheless. The soundtrack is also well done – one of those that compels you to scour the Internet in hopes of tracking it down (alas, no such luck thus far). The sound effects are also paired well to various actions, culminating in chunky melee blows and wondrous magical spells. 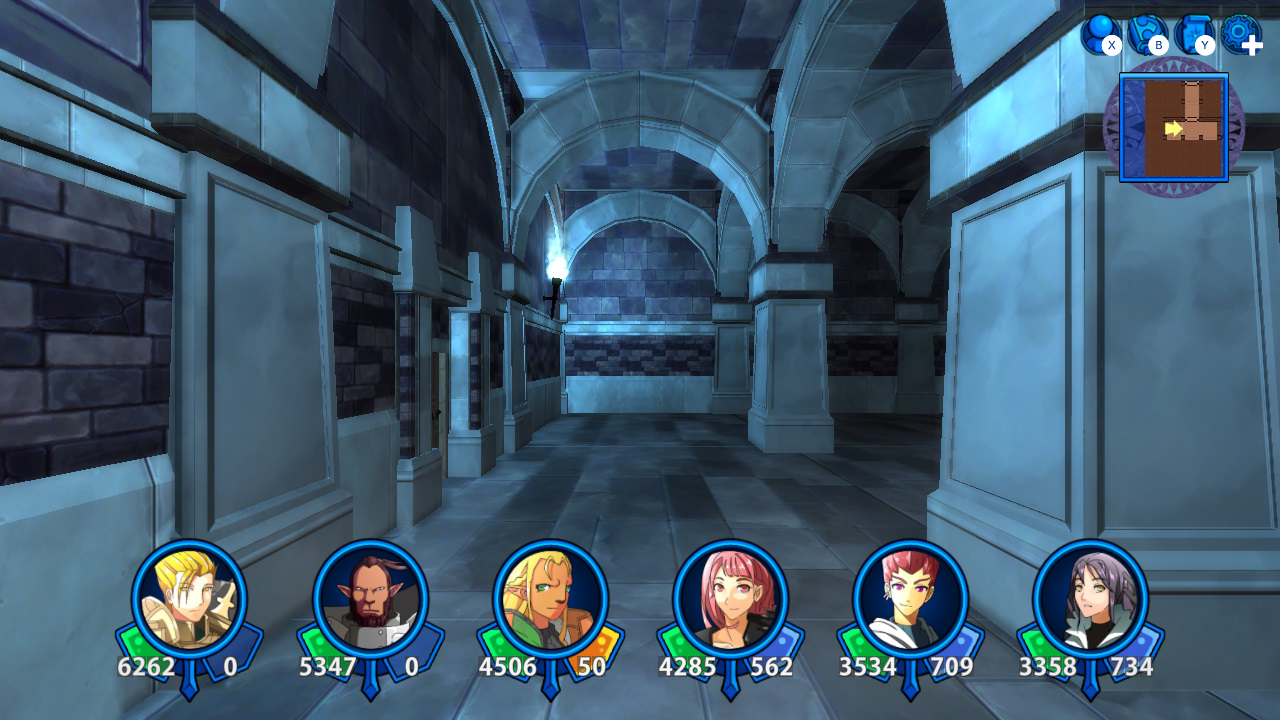 Things only turn south when viewing the dungeons themselves and their accompanying performance. Although the Infinite Labyrinth is home to many worlds that are visually unique from one another, they tend to just feel, well, a bit dull and lifeless. This feeling is accompanied by a noticeable delay with each movement, and this really begins to add up with the absence of an auto-pathing feature. Handheld mode fares a little better in terms of performance, but it’s still apparent even there. Considering this is a game about dungeon crawling, these kinds of issues are a bit of a disappointment.

While the validity of this labyrinth’s “infinite” realms is questionable, the deep character customization and handcrafted dungeons are anything but. In terms of systems, and especially character development, Infinite Adventures is easily one of the better dungeon crawlers on the Nintendo Switch. While some may groan at another amnesiac protagonist, I think enough is done here to make it compelling so long as you’re in it for the long haul (the payoff takes a while). The general gameplay loop is solid, if somewhat hamstrung by performance issues and certain missing features (ie. auto-path). Regardless, for $14.99USD, Infinite Adventures is absolutely worth a look.