Inferno 2 is a bit of a simple affair. I wouldn’t call it the “ultimate twin-stick action-RPG/shooter” and it’s very clearly not that intricate in terms of its graphics- everything sort of looks like it came right out of a kindergarten basic shapes book. So exactly what does Inferno 2 have to offer the current Nintendo Switch crowd other than what feels like a direct-from-mobile experience? Let’s kick the chair out and jump into the Inferno to take a look. 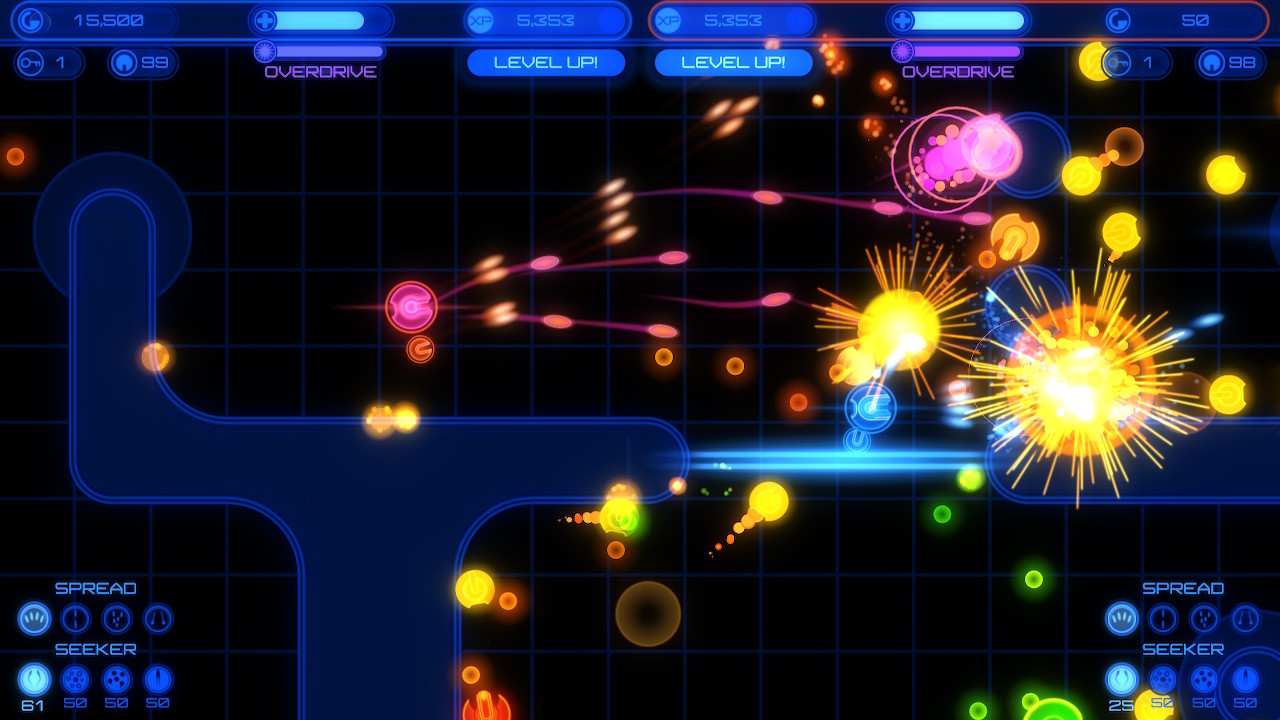 Inferno plays much like you would expect any twin-stick-shooter to play. You use the left stick to move around and the right stick to start firing in whichever direction you would like. While firing, you may use the ZR button to shoot missiles for extra damage, but only as many as you have ammo for. By collecting items from the remains of enemy shapes, you can fill up your power meter. When full, you can then unleash a power attack upon all the colorful enemy shapes. There’s a total of 4 different weapons, 4 missile types, and 4 power attack types. Your goal in all of this is to reach the end of the level by finding the exit. If you die, you’ll respawn at the start of the current level. When I say “shapes,” I really mean enemy “ships and projectiles,” but they do really feel like they are just a bunch of shapes on the screen. I’ve seen mobile idle games be more visually stimulating than Inferno 2, but it also feels very safe, simple, and entirely basic. 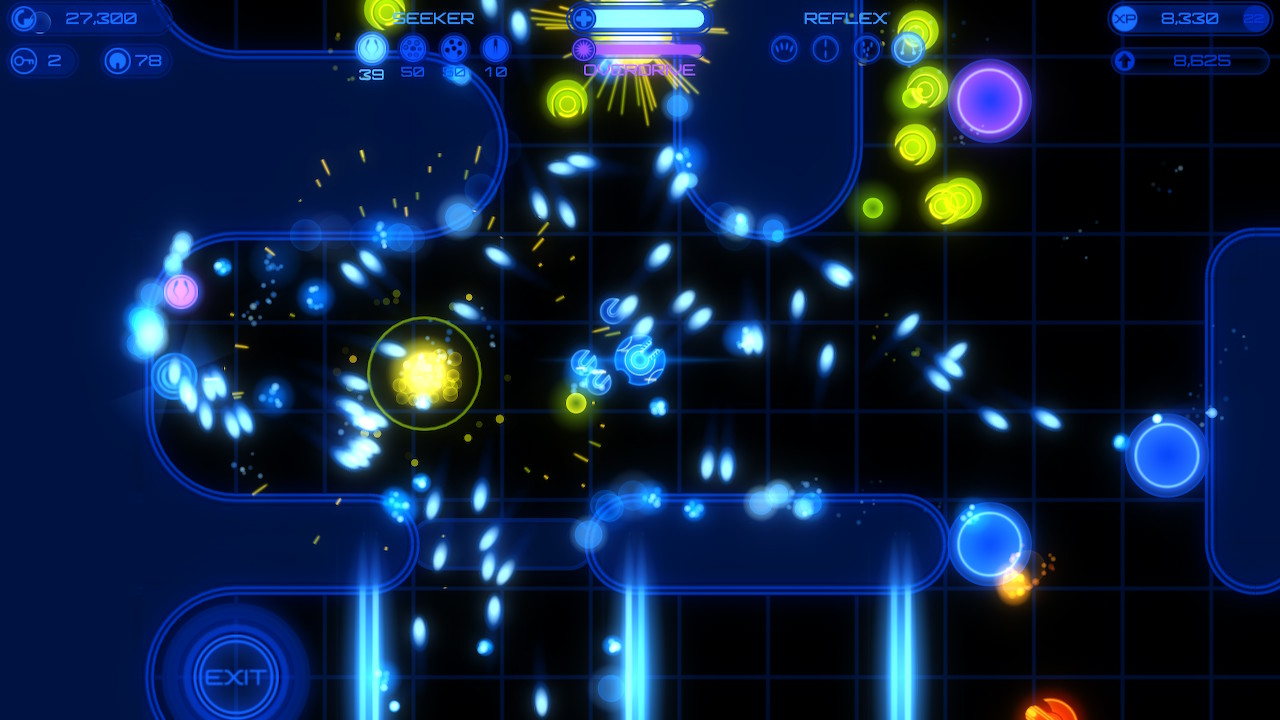 As you progress in Inferno 2, the game slowly starts trickling out new enemy types and map elements. Unfortunately, these do little to ease the oncoming wave of staleness and despair. Gladly, this is where the worst of things end. Inferno 2 excels at creating tight, tense levels that force you to utilize swift decision-making skills, or otherwise perish. Throughout my playtime, I didn’t feel like I was playing any level the same way twice, and each has its own gimmick you must overcome to succeed. While the end goal was always to reach the exit, the journey was always slightly different. It was a pretty awesome feeling to wait around the corner, whittle down the oncoming enemies, then charge headfirst into the enemy spawner with reckless abandon, hoping I had enough missiles to take care of the job. 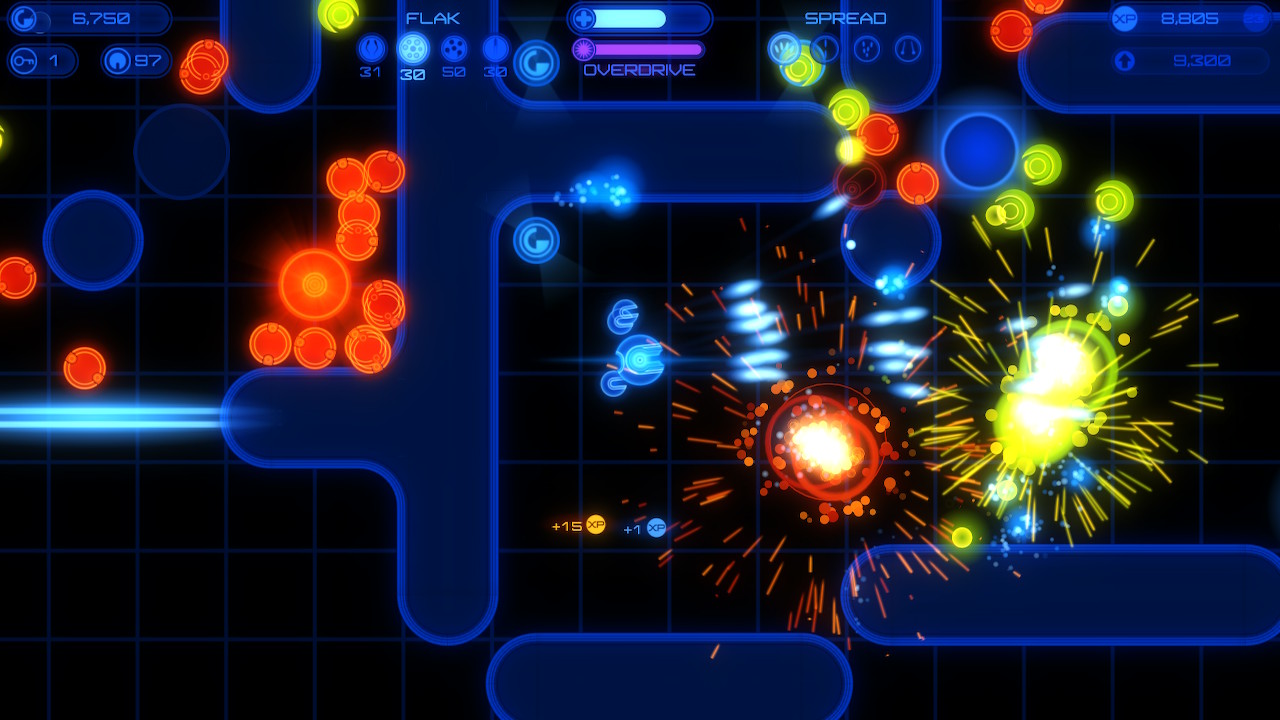 In Inferno 2, you navigate through “80+ levels of atmospheric awesomeness”. Thankfully, I’m not one to require games to be of a certain graphical standard in order to enjoy, but this game really tested my self-imposed limits. Inferno 2 looks good enough for what it’s trying to accomplish… as long as you don’t mind me calling it basic all day long. Enemies are shaded in various colors on purpose. There is a sort of method to the madness here. Deep red colored enemies are only vulnerable to certain weapons, while other colored enemies will attack or move differently. The color identification really helps tell which enemy you’ll be going up against, but in the end, you’re holding that right stick and blasting everything all day long anyway. I’m not really sure it matters after the dust settles. The only decisions you really have to make is when to use your supply of missiles and when to hit the “ZOMG” power attack button. Inferno 2’s saving grace is how nearly everything explodes into a fantastic shower of colors. It really gives the game some much-needed impact, and made it look pretty rad as well. 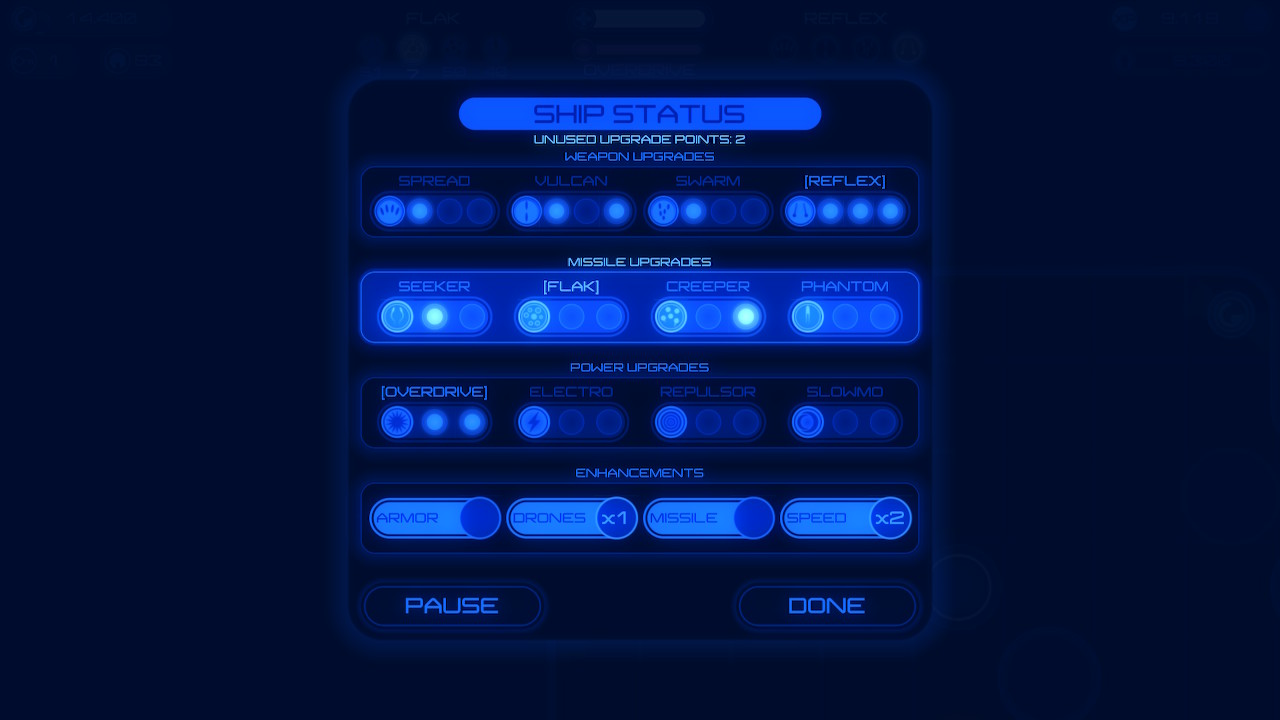 Let’s set one thing straight right now, this IS SwitchRPG. Inferno 2 has as many RPG elements as an empty notebook has Dungeons and Dragon quests: both have some potential, maybe a few scribbles towards the back from that one time you had that one idea. Nonetheless, Inferno 2 is 100% definitely not an RPG. For each of the weapons, missile, and power types are 3 different upgrades, each requiring an ever-increasing amount of upgrade points. There are specified shop locations scattered throughout the levels that will allow you to purchase such upgrades. That’s it. There’s no story pieces, no ship classes, dice rolls, or treasure chests that will eat you. The shopkeeper, if there was one, won’t even sell me an ale. I guess including stat points in your game is enough for it to be called an RPG, but we’re not going to just let that slide by unnoticed here.

Music to my Ears

In my opinion, the best thing Inferno 2 does is match the music and sound effects to the gameplay. The deep bassy thuds of the explosions and shots complement the upbeat EDM vibes the background music track throws off. While there are no complaints in the sound department here, it’s mainly because there’s not a whole lot of room for it to go wrong due to Inferno 2’s rather basic gameplay. 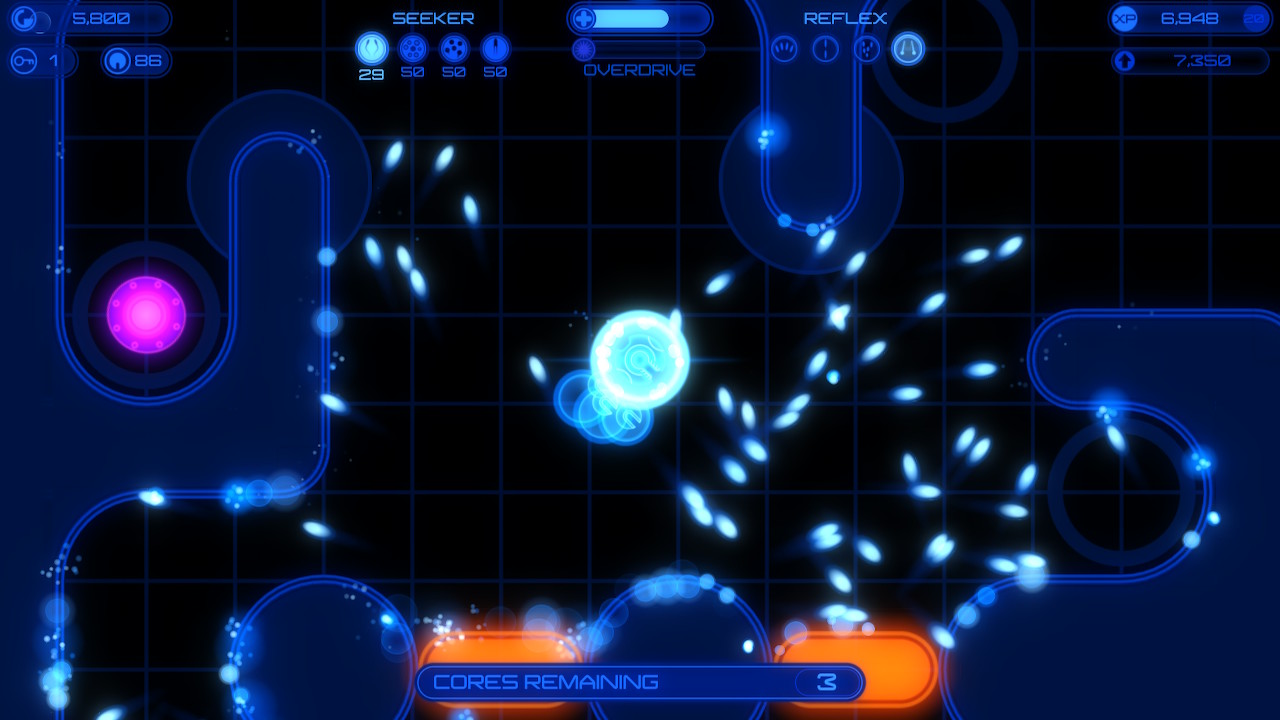 For me, Inferno 2 comes off as feeling very basic, turned worn pretty quick. Somewhere around 35 levels in, I started looking for a rope and a chair or the exit, I’ll never tell which. The gameplay became really repetitive and boring and the upgrades didn’t appear to really change how the weapon behaved or looked, only blowing everything up faster. Inferno 2 supports two players for some local co-op action, but it felt like the game really ramped up the difficulty for 2 players, which just discouraged my spirited companions from continuing on. There’s also a new game+ but I didn’t have a large enough supply of sleeping pills to make it that far. Inferno 2’s only saving grace is its varied level design, which encourages life or death, risk vs reward decisions. In the end, I was still just moving a circle around a Tron inspired background, shooting shapes at other shapes searching for the next exit.