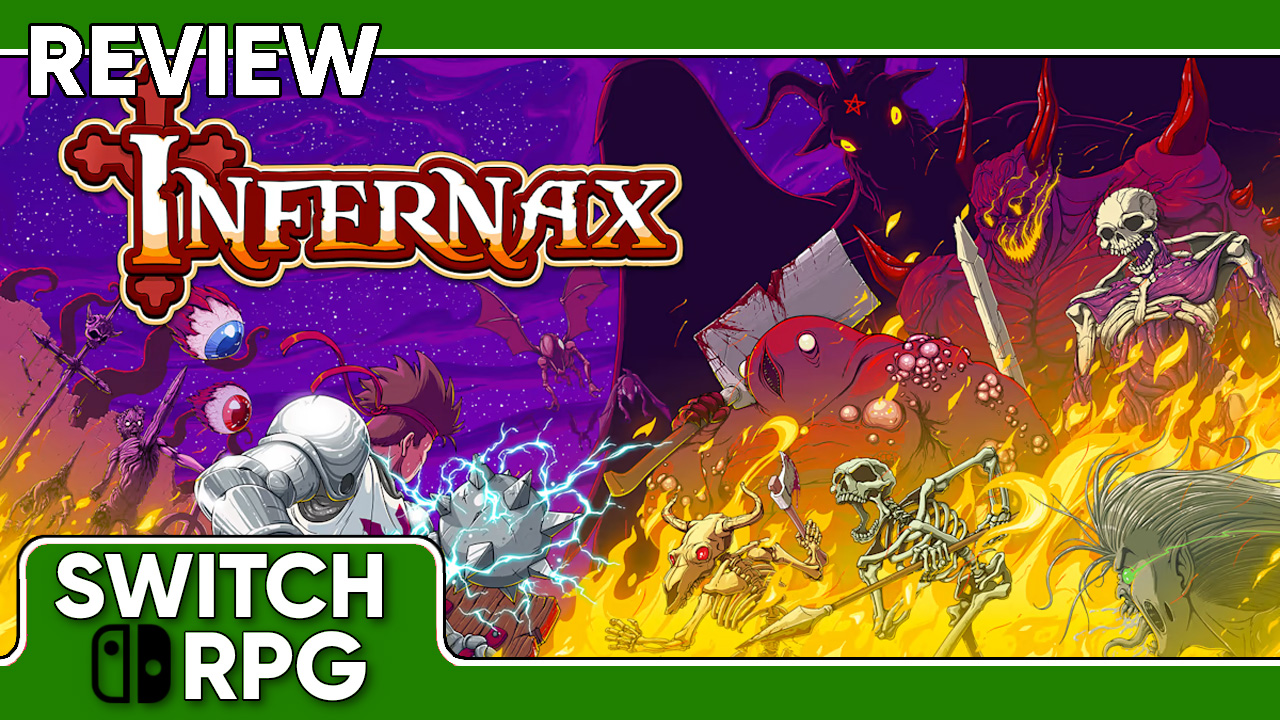 Back when the gaming industry was the Wild West, you often witnessed drastic changes between releases in a series. Final Fantasy II on the NES was the polar opposite of Final Fantasy in terms of character progression. Another example would be Castlevania II: Simon’s Quest, where it featured a day-and-night cycle, multiple endings, and even a basic RPG leveling system.

These bold, often ambitious changes for the time would often result in a mixed reception. While I personally look back on a lot of these games, in general, more fondly than that, there are certainly more refined examples of some of these ideas that we can more easily experience today without completely departing from the trappings of modern gaming. In many ways, Infernax by Berzerk Studio is a complete, modern realization of what Simon’s Quest attempted over three decades ago, while also being so much more. 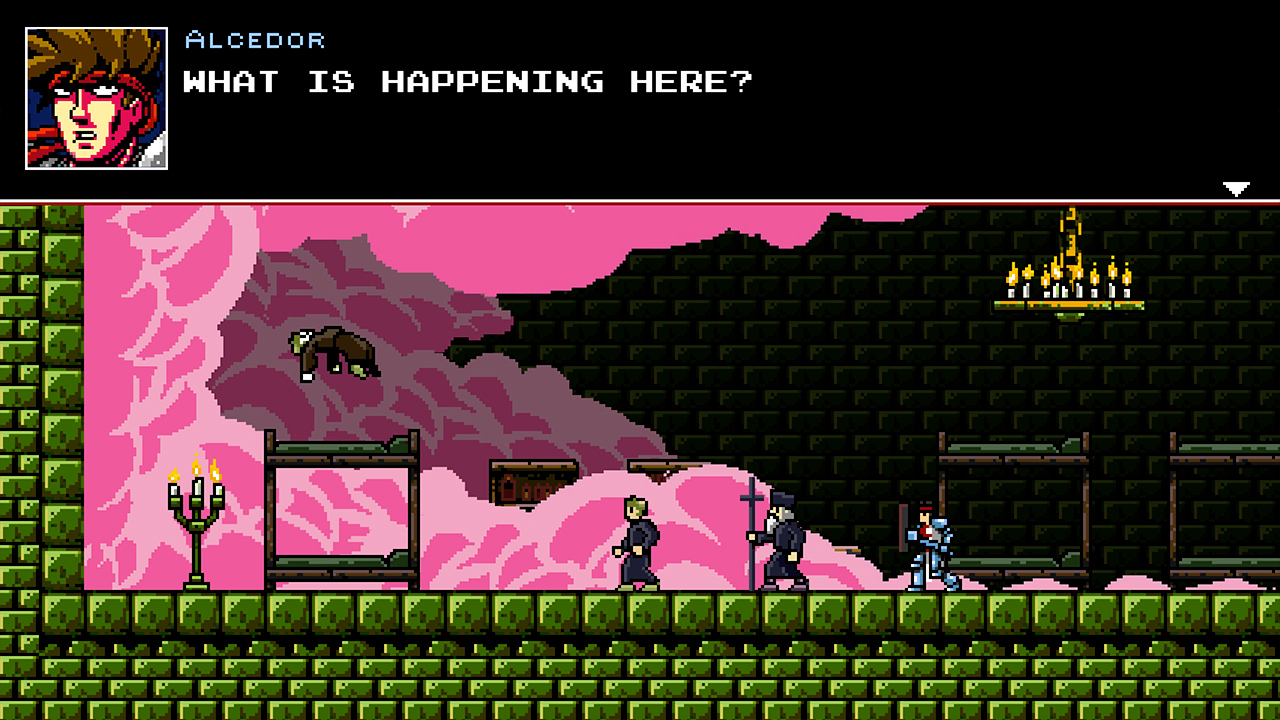 Infernax stars Alcedor, a knight fresh off the medieval Crusades who’s greeted with a hellish nightmare rather than a warm welcome home. All sorts of foul demons and beasts now plague the countryside, and upon driving their forces back, a grim discovery is made: Five powerful monsters now act as a seal to the true culprit behind the scenes, and all of them must be vanquished before the country will return to peace.

Not only does Alcedor have to slay swathes of demons, he also must make some very difficult decisions along the way. And every decision has consequences, ones that feed into an invisible morality system that will ultimately govern what ending is obtained in a run. Some endings are meatier than others, but many grant access to cheat codes that can be used to somewhat streamline subsequent runs for different endings (should you fancy using them). The choice and consequence system does not only feed into the narrative itself though, it also can govern what Alcedor has access to and what he can accomplish in the world. There’s a lasting, meaningful impact to many of the decisions you make, and they should not be made lightly. 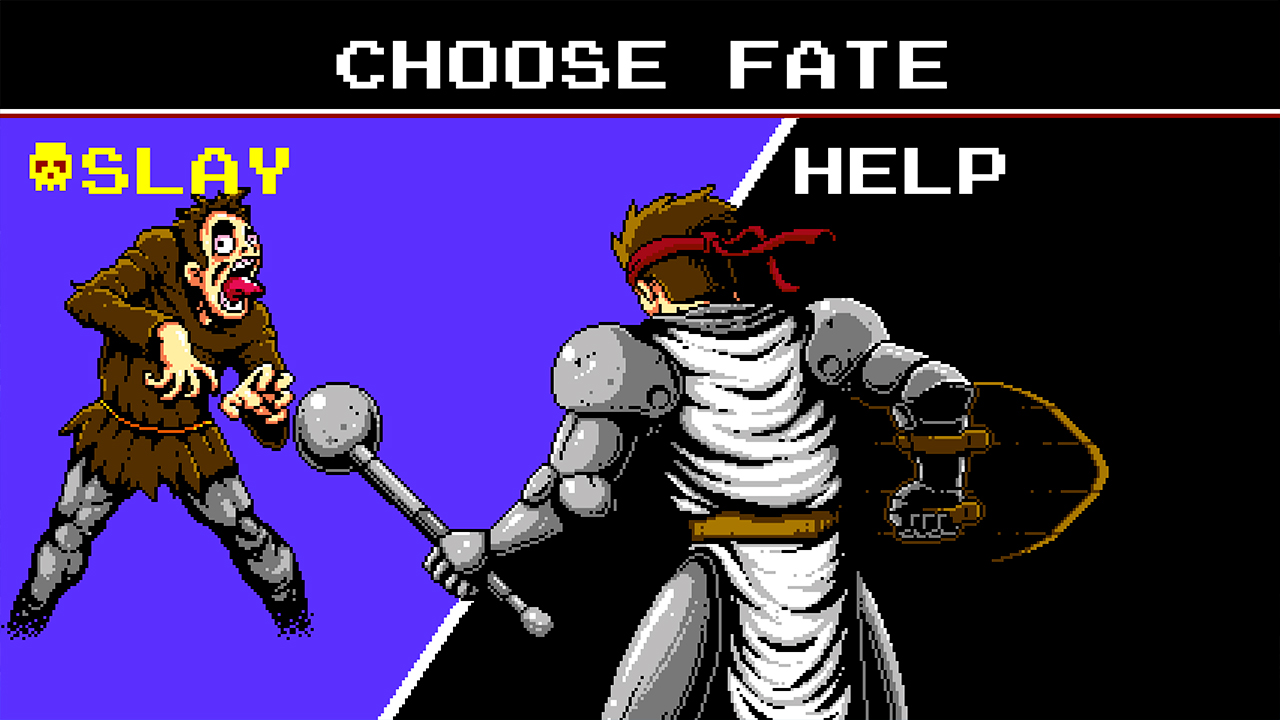 Despite the multiple endings and numerous choice and consequence scenarios, the story of Infernax is simple: demons are running rampant, and it’s a horrible night to have a curse. Townsfolk will echo this sentiment in the various villages spread throughout the region, many of which will hint at how to complete certain objectives. The overall narrative presentation is very much in the spirit of classic adventures from the NES era – easy to follow, and not really deep – but that’s not particularly a bad thing considering how well it is done here. It’s all but guaranteed that you’ll sweat some of the tough decisions along the way even without deep characters and complex worldbuilding. Sometimes less is more, and that’s certainly the case here.

Infernax is a 2D sidescrolling adventure with some Metroidvania elements. Brandishing a mace, spells, and various abilities and traversal skills learned along the way, Alcedor will travel the macabre countryside in order to cleanse its corruption. What this generally means is killing lots of demons in the absolute goriest manner possible. 8-bit graphics or not, Infernax is certainly not for the faint of heart. The primary objective in Infernax is to travel to a handful of dungeons, defeat their overlords, and ultimately break the seal and deal with what’s really behind closed doors. 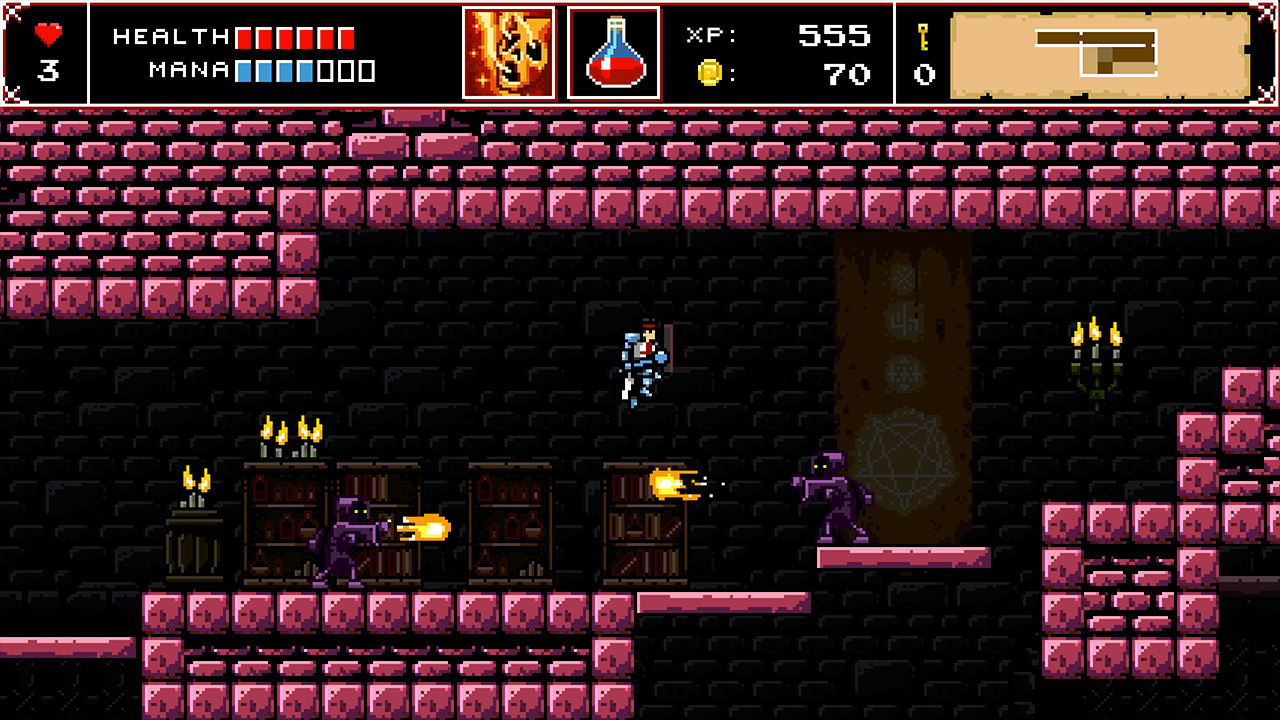 As Alcedor vanquishes his foes and helps (or plots against) townsfolk in need, he will gain exp that can be used to “level up,” allowing for a single, but permanent increase to either health, strength, or mana with each level. Each category has an upper limit, though it takes some commitment to get each one to max over the course of a normal playthrough. Fortunately, Alcedor can also take advantage of equipment upgrades, health/mana potion upgrades, as well as permanent maximum life upgrades.

Being an old-school game at heart, Infernax will result in a “game over” should you expend all of your lives. This could mean a lot of lost progress, as there aren’t a whole lot of save points scattered about the area, though there is a “casual mode” you can opt into that does allow you to retain a certain portion of lost progress should you meet your demise. And meet your demise you will, as Infernax wears its retro inspiration right on its sleeve by having some very precise platforming demands that may make you curse the skies every now and then. But if you can get past these select few spots, there’s little else that might infuriate you as bosses, while often challenging, have pretty consistent patterns that can be learned and overcome rather quickly. 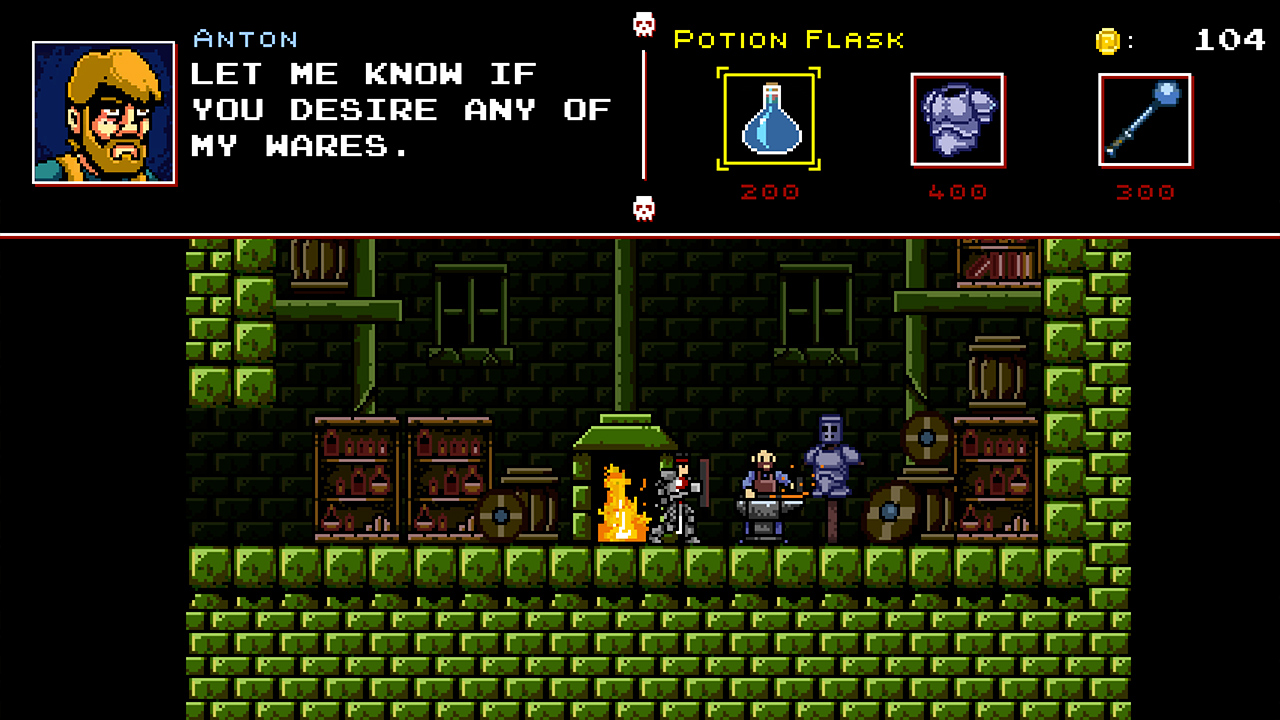 Either way, Infernax does a great job of ramping up the difficulty, starting out fairly tame before making every subsequent task just that bit more challenging. Although there are multiple endings to obtain, some are easily obtained while others require a lot more effort to reveal. My first ending (Path of the Martyr) was obtained in five(ish) hours (blasted Switch and its vague playtimes!), but there are a few, notably the Future ending and all that leads up to it, that demand a larger investment to fulfill. I do see myself returning to witness every ending later not necessarily for the story alone, but simply because the game just feels good to play. While it may not appeal to those more accustomed to sidescrollers and Metroidvanias with modern physics and deeper mechanics, those that are okay with tight NES-era controls and desire a good old-fashioned adventure will be just fine with it.

Infernax excels in its presentation just as much as it does in its gameplay, feeling like a natural expansion to all the classic Castlevania titles on the NES with its gothic pixel art and an absolute banger of a chiptune soundtrack. The biggest difference between this game and the classics, however, is that it’s a literal bloodbath. Every strike of Alcedor’s mace will shower the area with blood, to the point that his own sprite will literally become covered in it for a short time after more intense situations. 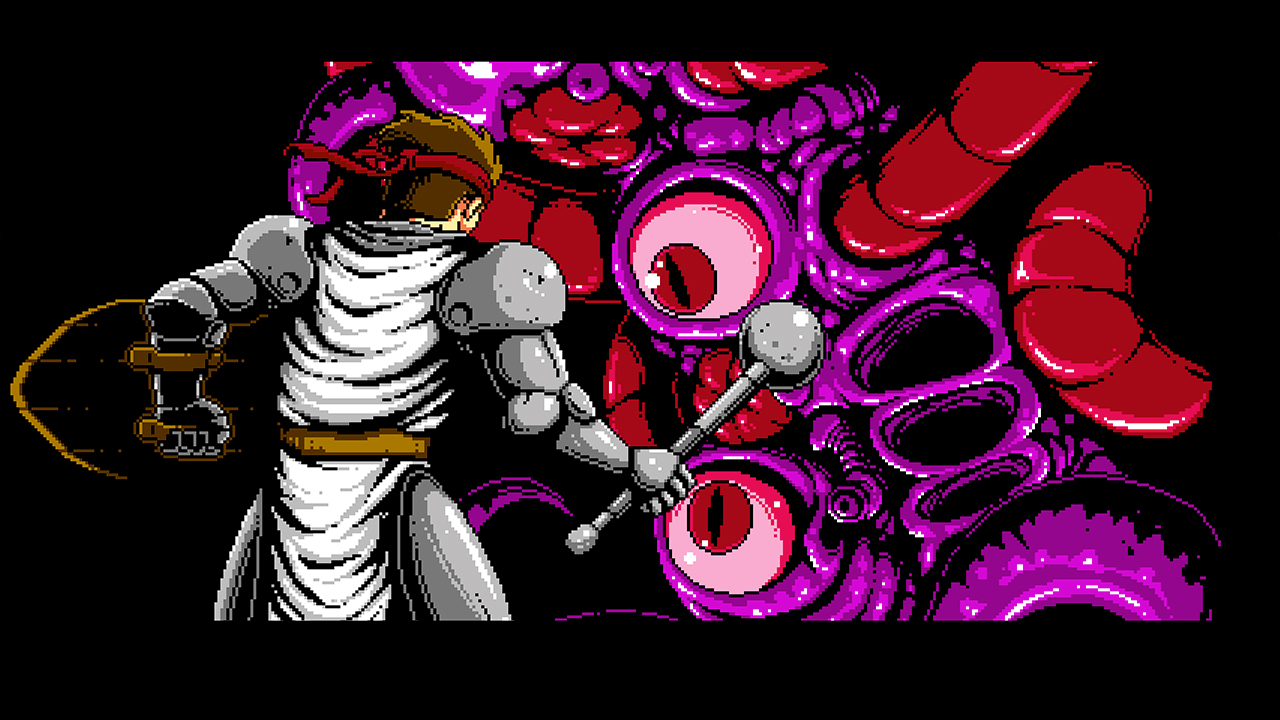 Bosses are not for the squeamish either, as they’ll generally explode into pools of gore and entrails upon being defeated, and their hideous (but fitting) designs are put on full display in a handful of impressive cutscenes. Exploding gore is a bit over the top, for sure, but it sure does make for some satisfying feedback when accompanied with the mace’s impact blows to their flesh. It’s not something I would have thought to ask for as a feature, but in the context of a game about purging demons from the land, it is actually built quite well for it. Additionally, weapons and armor change the appearance of Alcedor, which is a nice, albeit subtle bonus.

Infernax allows 2D sidescrolling adventure fans to travel back in time with its NES-like presentation, all while providing solid RPG progression systems, meaningful choice and consequence, and a peppering of QoL components that ultimately make it appealing for old school gamers and newcomers alike. It’s simple on the surface, but provides a lot of depth and replayability opportunities thanks to the various endings available. It may not be able to wield the Castlevania name outright, but it’s certainly worthy of it on its merit alone.