If you’re looking for a nice, cozy game to warm up with by the fire, you might want to look elsewhere. Immortal Planet is desolate, cold, and brutal, though if I were to tell you that its gameplay is heavily influenced by Dark Souls, that should explain a great deal about its gameplay loop and level of difficulty. You might argue, “Evan, doesn’t Dark Souls have bonfires? Can’t I snuggle up to them, at least?”

There are no bonfires to be found here, my friend. Just metal: in bullet, blade, and armor form. So get ready for a wild, robotic ride.

It’s true, Immortal Planet plays very similar to a soulslike game. As far as games that evoke this style of combat, Immortal Planet is one of the most direct translations: the movement and attack options are incredibly methodical and calculated, requiring a great deal of stamina investment. You have your standard light, heavy, and dodge inputs, but there are also ranged options in the form of firearms and spells. These two ranged mechanics work off of specific ammo systems, which means they are in extremely limited reserve until you should rest at “the cube,” the game’s equivalent of bonfires, where you can upgrade stats by spending experience. Your light and heavy attack options vary slightly based on the weapon class you are utilizing, with most weapons possessing a specific quirk that differentiates them from one another. Upon first creating your character, you’ll be given the chance to equip a specific passive skill, some of which possess obvious synergy with specific classes, while others promote particular play styles, whether you wish to continuously regain health or receive bonuses based on your ability to dodge with precision. 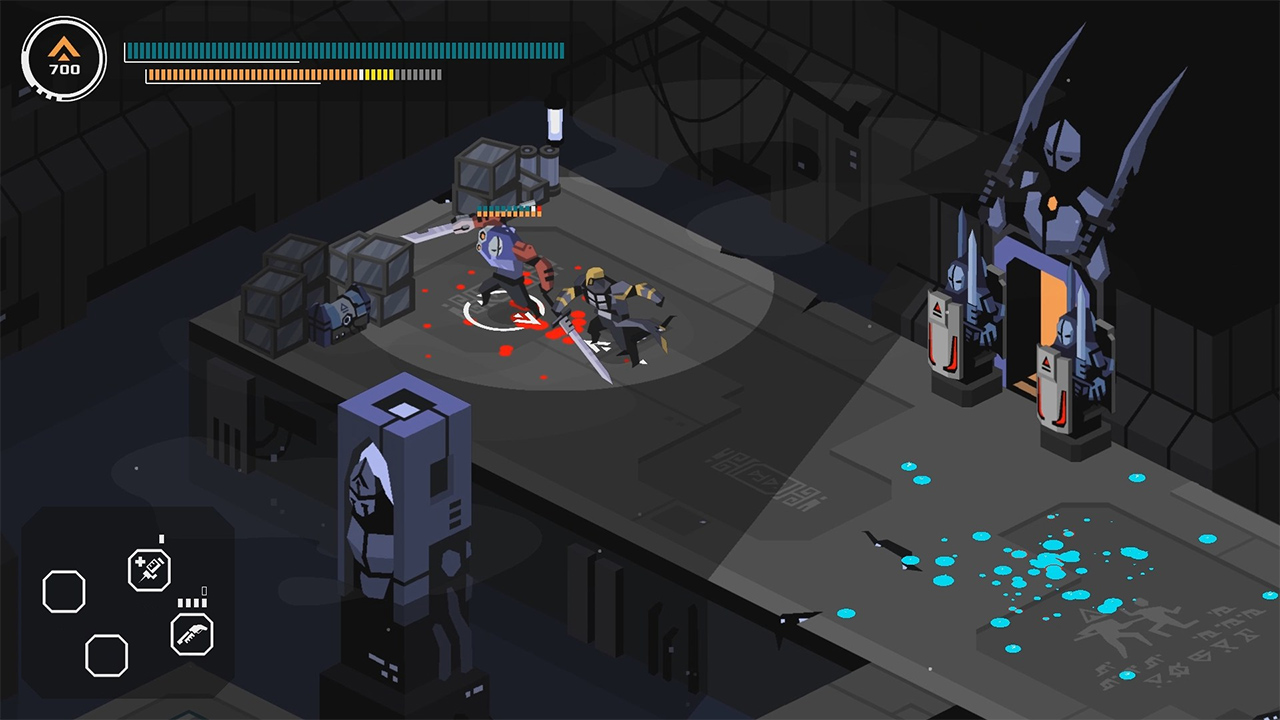 The level design plays only-slightly into how you utilize your moveset in Immortal Planet: you’ll need to dodge roll across specific gaps, sprint past security lasers, and wait on shifting platforms in order to progress, and the game’s looping design also means that you’ll never be all that far from one of your upgrade cubes. Because of the game’s isometric visuals, however, there’s not much of the design that implements vertical height, which is probably a good thing, considering the game’s combat is tough enough within the dimensions it does occupy.

Enemies, and bosses especially, are a tough affair in Immortal Planet, with the former often locking the player into a specific area to do battle and the latter possessing multiple phases and an impressive amount of animations and abilities. This means that, in many scenarios, you’ll have to clear out a certain number of enemies in order to progress to the next area, conserving resources and generally avoiding any and all damage, so that you can have a passing chance at learning the attack patterns of the big bad bosses at the end of an area. In short- yeah, it’s hard. It’s also very gratifying to land that final blow on your current obstacle because of this, meaning Immortal Planet has all the ingredients for a very rewarding soulslike experience, should that suit your fancy.

As mentioned previously, Immortal Planet uses an isometric presentation angle, employing some cel-shaded, border-less character and environment designs in order to communicate its action. This means that, despite its very heavily gray-focused color palette, much of its action and characters stand out, in addition thanks to the similarly presented stats, stamina, and shields that appear over enemy heads. The entire game is cold, even with its light-orange stamina gauges and elemental effects. Though most of the enemy designs look similar, its the alterations in their stature, weaponry, and behavior that helps differentiate them and indicate their level of threat. Though the music is mostly atmospheric while traversing environments, it really picks up in intensity during boss battles, which is the precise moment you’d expect the music to match your level of stress. It’s suitable and thematically appropriate, but it won’t worm its way into your head after having played through the story. 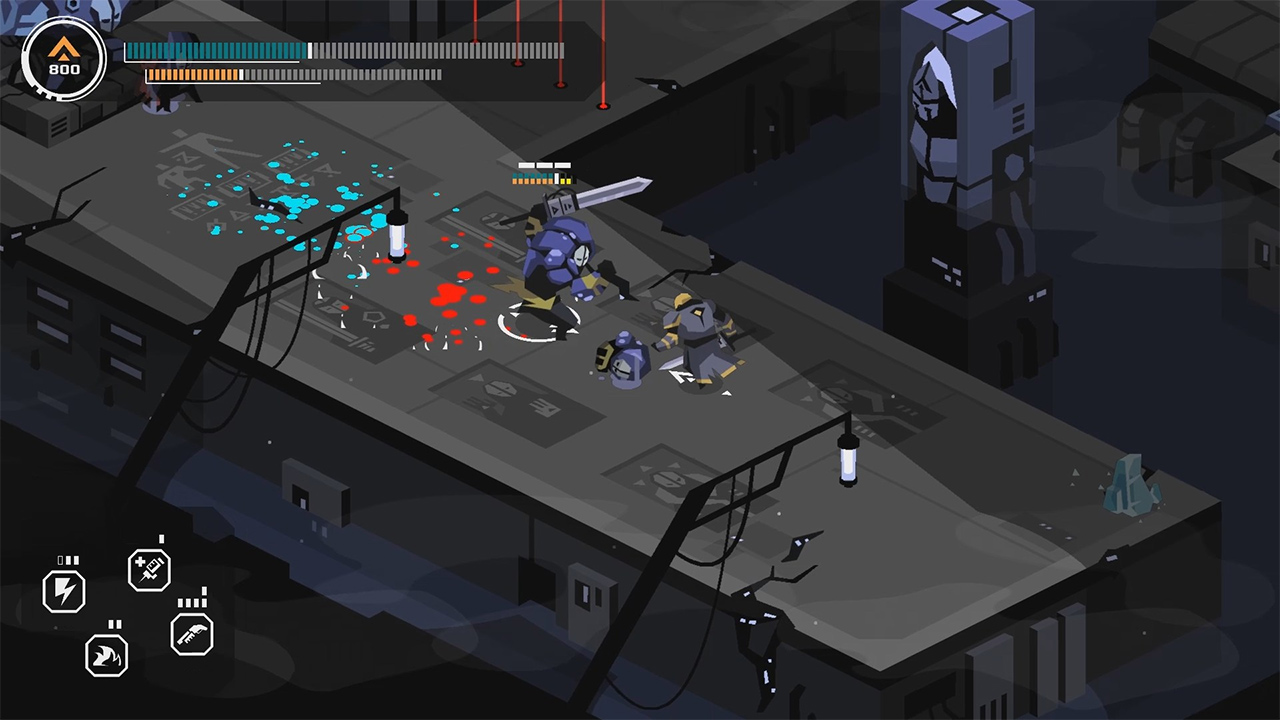 The narrative of Immortal Planet is one shrouded in mystery, but yes, the setting is, in fact, the planet of the Immortals, dormant beings slumbering within various ruins, which are guarded by the Awakewalkers. Though you do belong to this race of individuals, most of which are dedicated to protecting their specific ruin, you possess a degree of sentience, and desire to break from the cycle of eternal servitude. You’ll journey across the Immortal Planet, regaining you memories and figuring out how to jump ship from the frigid wonderland. The narrative beats are mostly cliche, but in classic souls-fashion, you’ll be able to glean some additional lore by having conversations with NPCs and checking flavor text on your equipment. Fun!

Though Immortal Planet’s slower movement speed and punishing gameplay might make the title seem like a slog initially, but as far as soulslike titles go, the experience is rather short. There aren’t a huge number of different environments, and the more proficient in combat you become, the less-likely it will take you multiple retries to make your way through Immortal Planet’s labyrinthine design. I will say that the isometric map design limits the potential of the map variety at times both in aesthetic and obstacles, which the game attempts to circumvent by locking you into rooms with enemies until you finish a skirmish. This means your ability to navigate the ruins and utilize space to the best of your ability will be continuously challenged, but never to a point where it feels like you’ve been genuinely thrown a curveball. 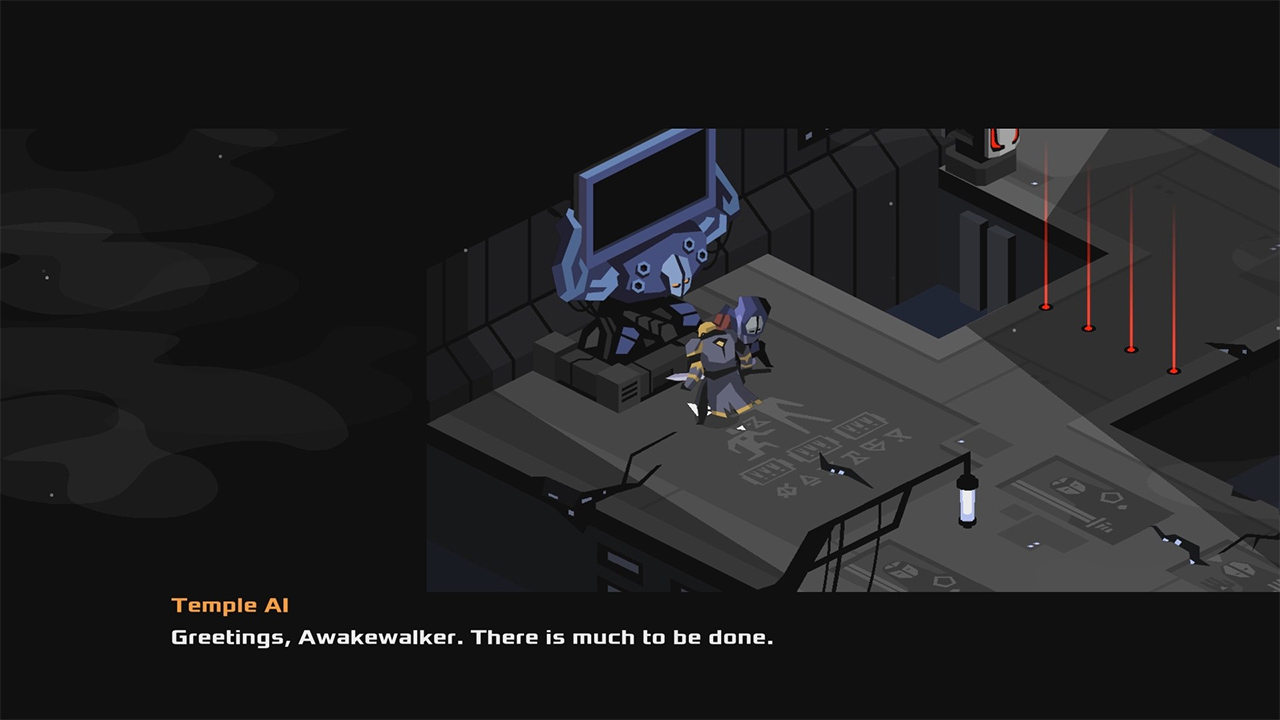 It might sound like I’m a bit down on Immortal Planet, and that is perhaps because I’ve dabbled in a fair number of soulslike titles over the past year and a half. The truth is, it offers a brief, but satisfying combat experience that doesn’t lack variety in terms of enemy encounters, but also doesn’t push the envelope in many ways. There are some odd weapon choices, but the game seems designed for multiple runs due to the variety and handicap present in its initial character creation, offering more straightforward builds as well as those that push a dedicated souls fan to their limit. For its price point and length, I’d easily recommend it to fans of the game it draws heavy influence from, though I can’t say it will sway newcomers all that much. Even a science fiction fan will find more fantasy that technology on display here, which means we’ll have to continue to look towards other titles still in their conceptual stage for the perfect blend of souls and science.