I Was a Teenage Exocolonist Review (Switch) 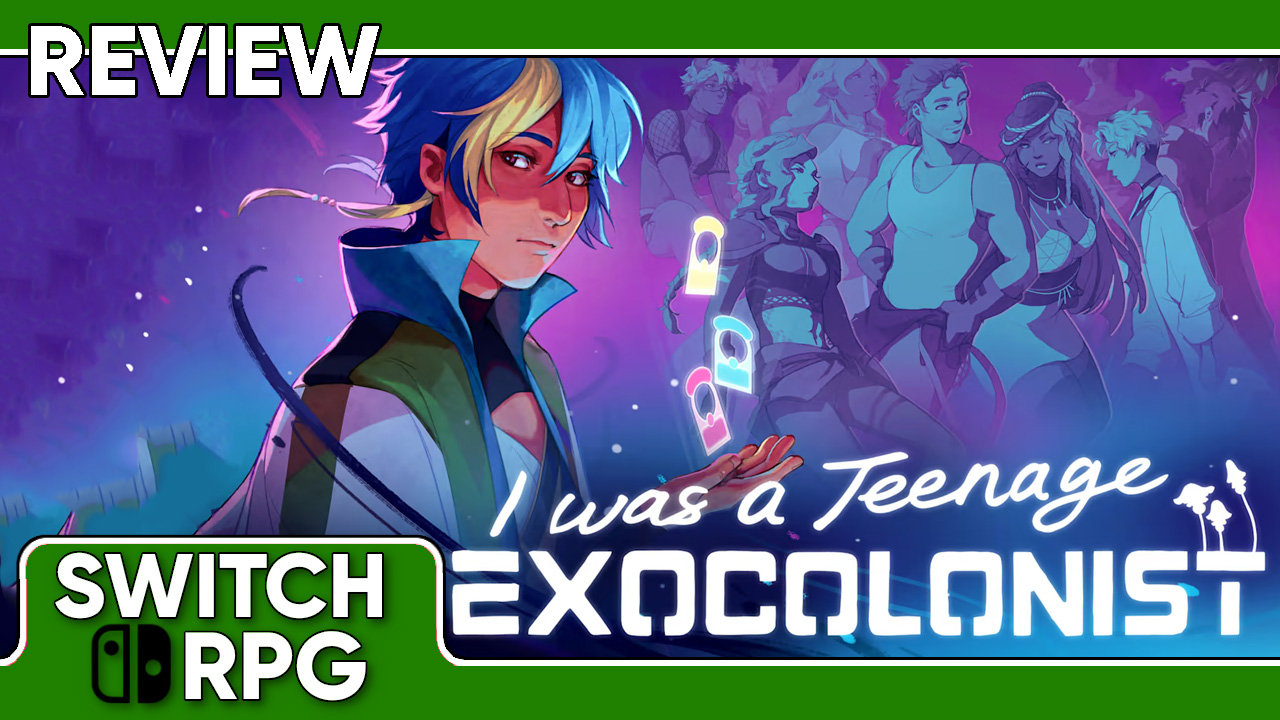 Traveling to another planet with the goal of colonizing it for humans is not a new thought. Whether in fiction or real life, it’s a prospect that has been thrown around for ages. But there’s more to traveling to another planet and making it a new home than getting on a spaceship and hoping for the best during landing. I Was a Teenage Exocolonist explores the life of a young person who finds themselves on a new planet, unsure of what the future has to hold for them. Will things turn out fine? Or is there danger afoot?

I Was a Teenage Exocolonist takes place in the time of life between the ages of 10 and 20, from the time that you’re on a spaceship flying through space, all the way to your first step into adulthood. It is a text-based RPG where you can build up your stats and depending on how certain stats are leveled, you can go down different paths in your character’s life. Whether you want your character to focus on combat, intelligence, or exploration, there are quite a lot of endings to explore. Along with that, I Was a Teenage Exocolonist has multiple playthroughs worked into the story, with your character suffering from nightmares. These nightmares are actually potential routes that you have explored in the game already, or will in the future. During your first playthrough, there will be certain moments that are unavoidable. But with subsequent playthroughs, you can actually change the story to produce a better outcome. It’s a great way to reward playing multiple times and definitely encourages trying to branch out and try out new paths. Along with unavoidable moments, there are also times where certain characters may go down their own character paths, hinting at other potential ending paths for your own character as well.

Each character has a friendship meter that you can build up by talking to them and giving them gifts. However, just as you can build up your friendship, choosing the wrong choice will cause you to lose points. Eventually, if you have enough friendship with a character, you can pursue them romantically. This can result in you receiving a special ending related to that character, alongside your regular job ending. 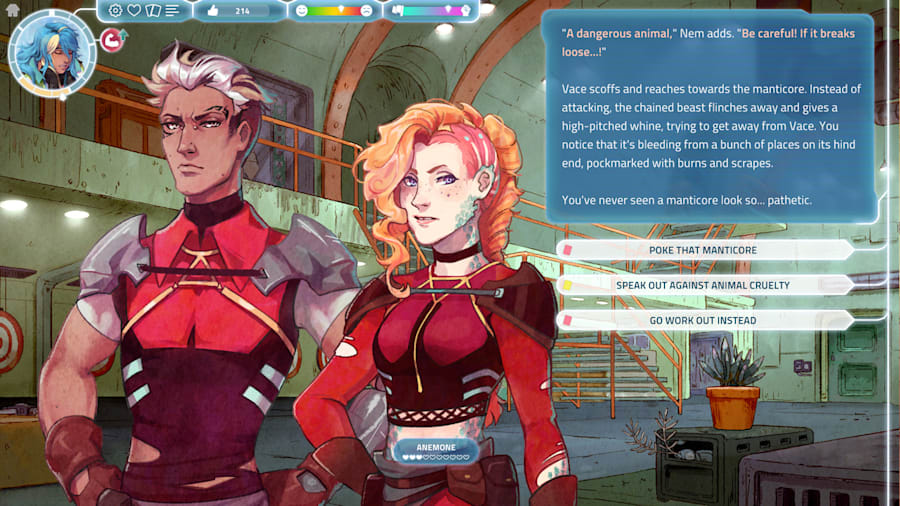 Of course, with any stat-raising game, there will be moments where there is no story being told and you’ll just be passing the seasons by performing random activities. And while the first time playing it may not be as tedious playing through, subsequent playthroughs do become a bit more of a drag to click through.

I Was a Teenage Exocolonist is a text-based RPG where you can build up your stats by performing specific tasks, such as going to school or helping in one of the many facilities in the colony. Depending on which stats you have leveled up, you may find that certain choices are blocked off until you reach a certain threshold. Each year is known as a cycle and within each cycle you can perform 13 stat-raising actions before a new year occurs. There are four different seasons with three portions inside that season (pre, mid, and postseason), along with the fifth portion of the year known as the Glow. During the Glow, official exploration is cut off. As you perform actions, you’ll find that your stress bar will increase. Once this bar reaches 100, you won’t be able to perform any more actions without taking a rest break. Resting will reset your stress bar back to 0. Since there’s no penalty for letting your stress reach 100, it’s best to just perform as many actions as possible before you are forced to rest. Along with your main stats and your stress bar, you also have an obedience bar that tells whether you are obedient or rebellious. Depending on your leanings, you’ll find that you can pursue other route options, such as being trusted with important colony proceedings or standing up to authority figures.

With every action that you perform, there will be a card challenge available. If you have no desire to play through the card challenge though, I Was a Teenage Exocolonist gives you the option to replace it with a coin flip instead. And on the flip side, you can also make the card challenge harder if you fancy that.

Once the card challenge opens up, five card panes will be displayed on the screen. You’ll also see your hand at the bottom and to the right of the screen, will be the number that you have to earn in order to win the challenge. It is up to you to fill in these five spaces with any of the cards in your hand in any order you see fit. However, the order of your cards matter, with certain patterns earning you more points. The following patterns will earn you increased points: pairs, similar colors next to each other, and straight flushes (increasing or decreasing). You are able to move cards around before submitting them, which is very nice when you are still getting used to the game and trying to feel out your best combinations. Along with singular card challenges, there are also story challenges where you will have to go through three rounds. With the three round challenges, the number of card panes starts at three, then goes to four, before finally finishing with five. You also keep every card in your hand that you didn’t play previously, allowing for a bit of strategy. You can collect new cards by doing actions, although not all actions will give you cards. However, as you play through I Was a Teenage Exocolonist, you’ll find that your deck can, and probably will, become very bloated. You’ll also be stuck with a lot of useless low number cards from your childhood. Early on, this isn’t too much of an issue, but as you grow older, the card challenges do start getting harder. But thankfully, you’ll unlock a feature with resting that allows for you to forget a card of your choosing. The only downside with this is that two cards are chosen at random for you to pick from.

Since I Was a Teenage Exocolonist is about making a life on a new planet, exploring is obviously a must. Like any other activity, you can choose to go exploring for a turn. But unlike other actions, exploring gives you the option to explore as much of a region as possible until your stress reaches 100. It’s the only activity that does this, which does also mean it’s a great way to boost up the stats associated with exploring, such as perception. However, you can also leave an expedition at any time. As you’re exploring, you’ll come across obstacles that you’ll need to go through in order to move forward. These obstacles will either result in you reading through a blurb of text before moving on, or playing through a card challenge. Either way, your stress will increase and you’ll be allowed to move forward, sometimes with a stat increase. Expeditions are a great place to farm collectables, which can be given to other characters as gifts or used during card challenges to help make things a bit easier. There is also quite a bit of lore secluded to expeditions, so if you’re looking to see the big picture behind everything, exploring around will answer a lot of questions about the world in general.

While I Was a Teenage Exocolonist is a text-based RPG first and foremost, there is still a lot of 2D art to be appreciated. The game opens up with a first-person shot of an event that happens quite a ways into the narrative, with an interesting shifting camera effect. Afterwards, the game shifts over to a 2D top view of the colony. Outside of dialogue moments and the card challenge, you can move your character around the map as you see fit, talking to other characters or interacting with specific items and events. The art for the characters also changes as all of the characters age, reflected as three different stages in their life. It’s really fun to see how all of the kids grow up, almost akin to looking back at older pictures of yourself (but without the cringing). 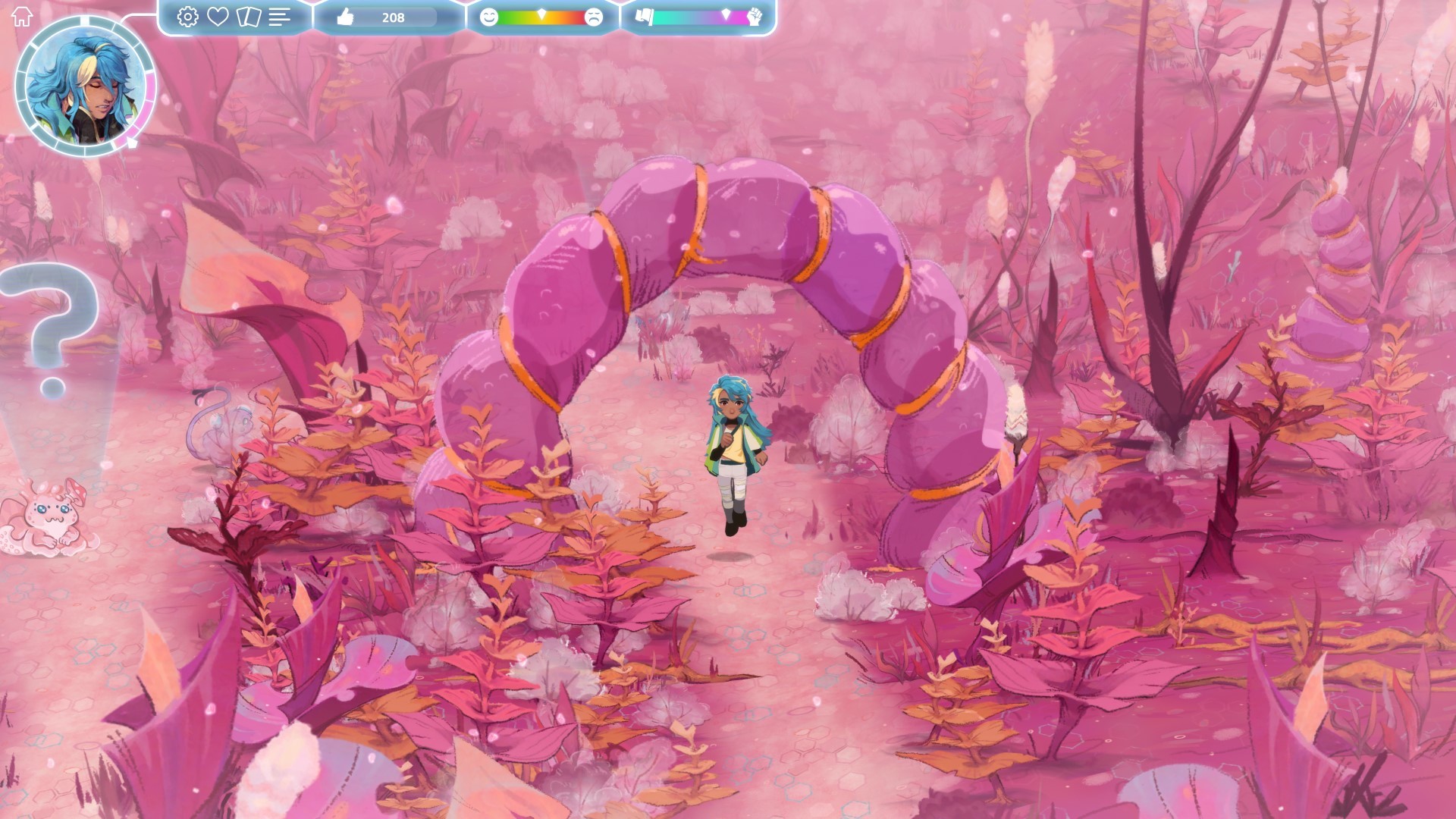 The color palette is very beautiful, taking on a watercolor kind of appearance. The vibrancy adds to the otherworldly nature of the environment. The music adds to the atmosphere, taking a lofi beats approach for a calm, yet upbeat soundtrack. There’s a nice range of mid-to-low tempo songs, but on the flip side, the soundtrack easily changes during the pivotal story moments where things grow darker and more serious.

Another aspect that is really cool is the UI in general. All of the text boxes look like information panels that you’d see on a computer, which fits right in with the futuristic feel of the colony. Collectively, I Was a Teenage Exocolonist comes together to form a colorful, futuristic experience.

I Was a Teenage Exocolonist is an interesting narrative RPG that really explores what life would be like for humans on a strange, undiscovered planet. There are a lot of black, white, and gray aspects to colonizing a planet that are explored, some routes going deeper into the idea than others. If you’re looking for a bit more action in your gameplay, you’ll perhaps want to look elsewhere. But overall, for fans of text-based RPGs, this is a must to try out. Paired with beautiful art, music, and rambunctious characters, I Was a Teenage Exocolonist is a good experience all around.